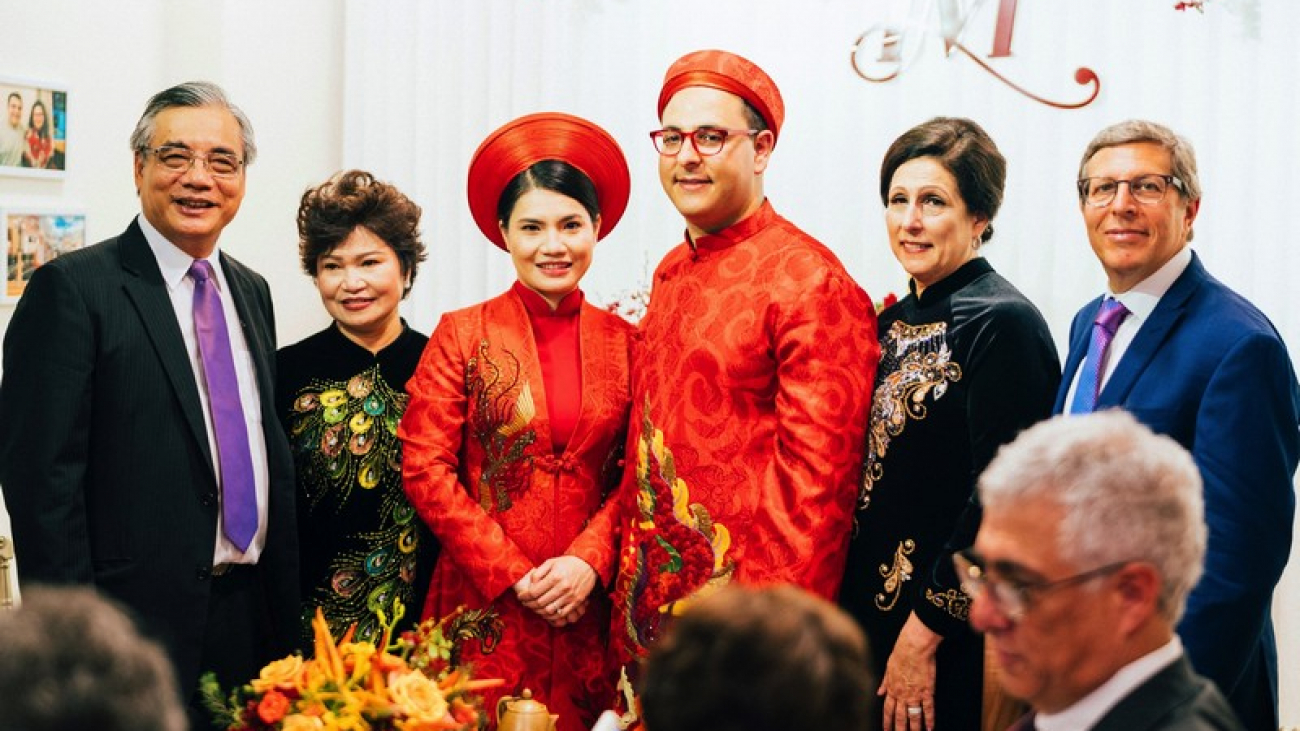 On a sand dune in Mui Ne Province, Jon Myers gently smiles and kisses his fiancé’s forehead as a camera flash goes off. At this very moment, the American entrepreneur feels more like a movie star. The romantic settings of pre-wedding photo shoots are familiar to Vietnamese couples, but for Jon, the experience is a novelty. “If I wasn’t marrying a Vietnamese woman, I would never have had this unique experience,” he says enthusiastically.

Jon is not the only Western groom in for a delightful surprise when their soon-to-be bride talked about pre-wedding photos; an alien concept in the West.

Italian groom Marco Servetto shared that in Europe wedding photos are only taken on day of the couple’s wedding, at the church or the reception. Nobody takes their wedding photos before their big day and at a different location. When his now wife mentioned the Vietnamese tradition, he asked: “Why would you want to take photos before the wedding takes place, and the couple is not yet husband and wife?” 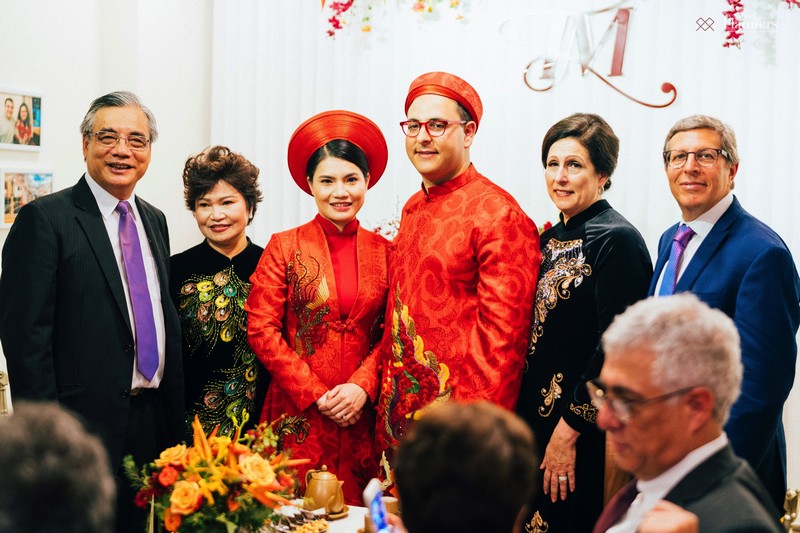 After his wife explained the tradition though, Marco understood that pre-wedding photos are an indispensable part of every Vietnamese wedding. Many couples thoroughly research and plan the perfect wedding album. “This is quite strange to my culture, but it’s an interesting experience. I love my Vietnamese bride, and I want to respect her culture and make her happy,” he says.

Australian groom Antonio Pudney and British groom Sean Lawlor are fascinated by the tradition and see the logic in the custom. In Western countries, wedding photos are taken on the actual wedding day, when the couple is exhausted and it’s a challenge to get the perfect shoot. And as wedding photos are taken at the church or reception, every couple’s photos look similar. “It’s always the couple standing in front of a church, or a water fountain. And then the couple and their parents next to the fountain. And then the couple and their relatives next to the fountain,” Sean shares humorously.

This is why taking the time to shoot pre-wedding photos is an excellent idea. The couple has more time to prepare, has assistance, and can travel to exotic places to take photos in the most beautiful settings.

A beautiful wedding album takes a lot of time, effort, and skills, as many Western groom have discovered.

First, the couple needs to pick the right photographer. Then, they need to choose a location. “Both of these are quite difficult, because Vietnam has hundreds of skilled photographers, and beautiful scenery everywhere, so it’s hard to choose,” says Antonio.

After a lot of researching and consulting with their friends and colleagues, Antonio and his bride chose the highland city of Dalat, famous for its fresh air, beautiful flowers, sun-filled valleys and endless pine hills. The setting alone could make strangers fall in love. Antonio and his fiancé fell in love with this beautiful city and decided to move to Dalat after having created their perfect pre-wedding album there.

Like Antonio, Jon and his bride also took their time to find a location for their pre-wedding album. They love the ocean, and Vietnam has endless resources of beautiful beaches, each with its own unique beauty. After much consideration, the two chose Mui Ne, as its blue sea, white sand dunes, bright sunshine, and peaceful fishing villages make for the ultimate romantic photos.

Meanwhile, in the crowded capital city of Hanoi, Sean and his bride found that the city’s charming street corners encapsulate their love story perfectly. The Old Quarter, Long Bien Bridge, the Opera House, St. Joseph’s Cathedral and the Red River’s rock plains have all added unique characteristics to their wedding photos.

The attire worn for photo shoots fascinates many Western grooms. They enjoy seeing their beautiful brides in different dresses. Unlike wedding photos in their own countries, Vietnamese pre-wedding photos hoots often last at least one day, so the bride has time to change into a variety of outfits. For many grooms, the most beautiful aspect of the whole process may just be seeing their beloved in the traditional Vietnamese Ao Dai, complementing the elegant beauty of Vietnamese women. 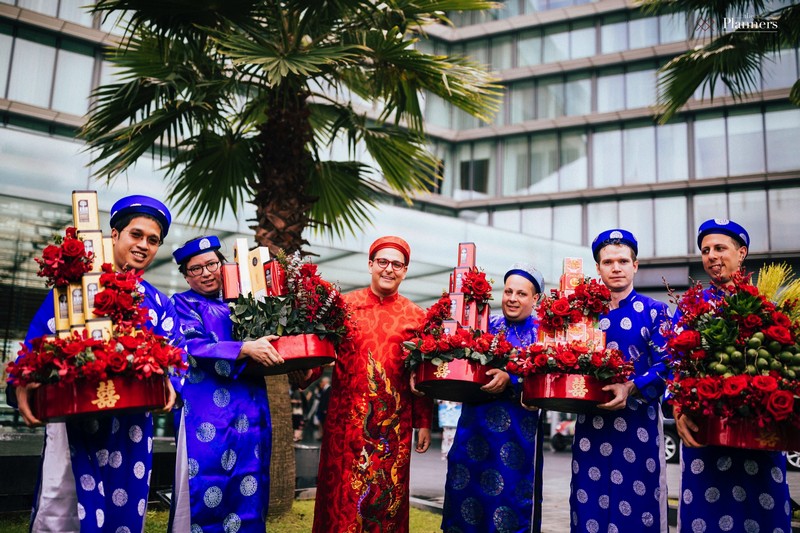 After careful preparation, it’s time for the two main characters to play their part in their very own romantic movie.

“You become the centre of the universe, as everyone is looking at you. If you are a shy person and cannot act naturally in front of a camera, it’s best to practice in front of a mirror, or you will have to redo most scenes over and over,” says Sean. “At first, I felt really unnatural, and even dizzy because of the cameramen’s instructions. They kept saying: ‘Look at the sky, now look at the bride, now look at the tree, good, you’re in love, good.’ I started feeling like a robot,” he recalls.

If a romantic setting isn’t all you want, you also have the choice of starring in your own action movie. Marco and his bride, for example, wanted to act out Titanic’s Jack and Rose on the sinking ship. But once the ship started to sink, they were not brave enough to see it through. Sean and his bride took photos of their love while on a bike on Long Bien Bridge, with honking traffic passing them by. By then Sean was used to the photographer yelling: “Look at the bride, kiss her, look at the bride, imagine your future together.” When he spotted a nearby hospital, he thought to himself: “I really hope that this is not be my future, as I was busy posing instead of looking at the traffic,” he says.

Many Western grooms say the wedding photographers were full of interesting ideas, but sometimes the poses seemed forced and unnatural, resulting in many couple’s photos looking the same. They wanted to do their own thing and act more natural, so that the photos seem more real.

According to some grooms, pre-wedding photography was an excellent opportunity for them to practice patience and get fit: “In Vietnam’s hot and humid weather, my suit was soaked in sweat. We kept asking: ‘Are we done yet?’ and the photographer kept replying ‘Almost’, but then I learned that a Vietnamese ‘almost’ was actually a long time. I could not smile anymore because my facial muscles were stretched out from smiling and posing all day,” Jon recalls.

Despite the tiresome day, the Western grooms we spoke to agreed that they had had a new, exciting, romantic, and even a little dangerous experience. “It’s worth spending a whole day to capture the most beautiful and happiest moments of your life, ones that you can keep and remember forever,” Antonio says. “Besides, this is also a great time for the couple to plan, draft ideas and discuss what they both would like to prepare for the photo shoot. It’s like a small practice activity that you can do together before your big day.”

It is not only the couple, but their family and friends too, for whom wedding photos are of interest. Antonio said that his family admires their wedding album, as it really captures their love. Jon says his friends were rather impressed with his wedding photos, because they were unique and different from what they have seen in their own country. “I think every couple should take pre-wedding photos, and I will recommend this memorable experience to every engaged couple,” Jon concludes.