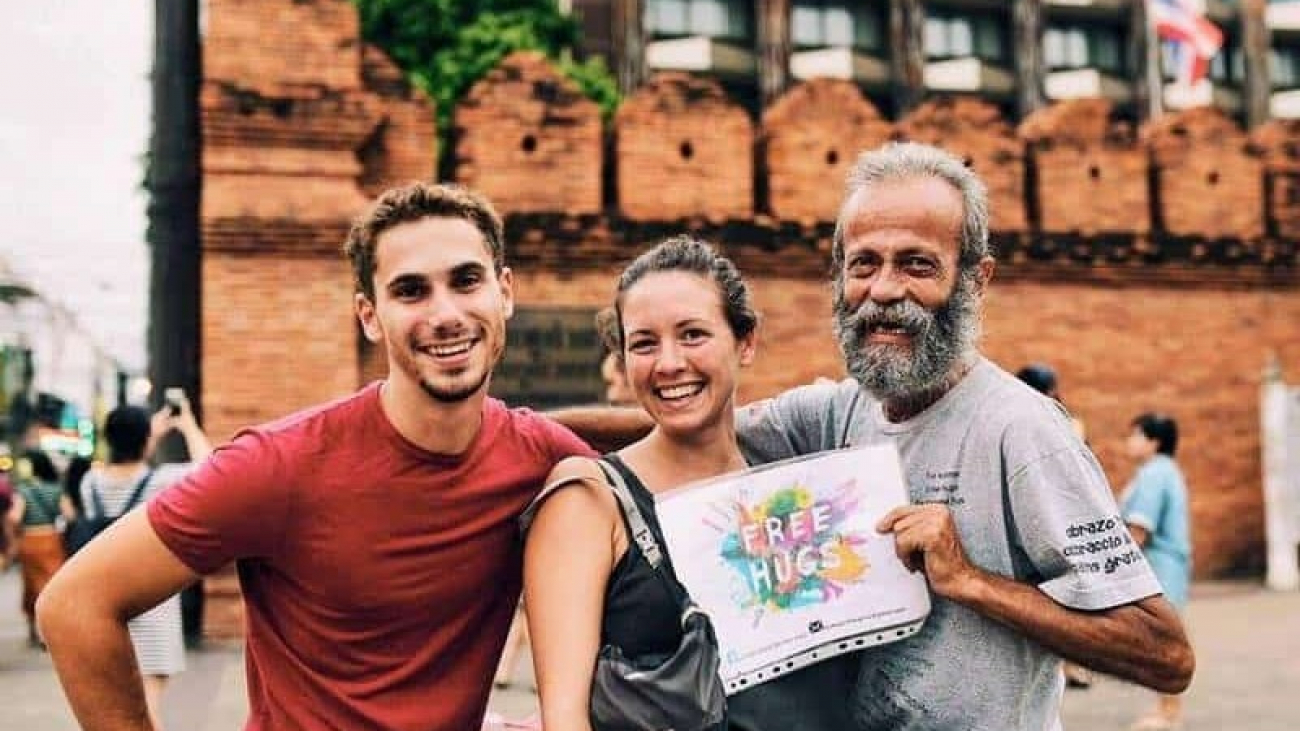 I met him accidentally one evening wandering around Tha Phae gate in Chiang Mai. He was a small man, sat in a tricycle, with a beard that covered half his face but which still could not mask his bright eyes and warm smile. Looking at me, he spoke in accented Vietnamese: “Give me a hug”. This man opens his arms to strangers as if to welcome a long-time acquaintance.

Those who have been to Chiang Mai (Thailand) must have encountered or even hugged this man at Tha Phae gate. He has always been there. The man is Luciano Pozzi. He’s 56. His life is a long, sad story, for most of which he has been separated from the outside world and alienated by others. 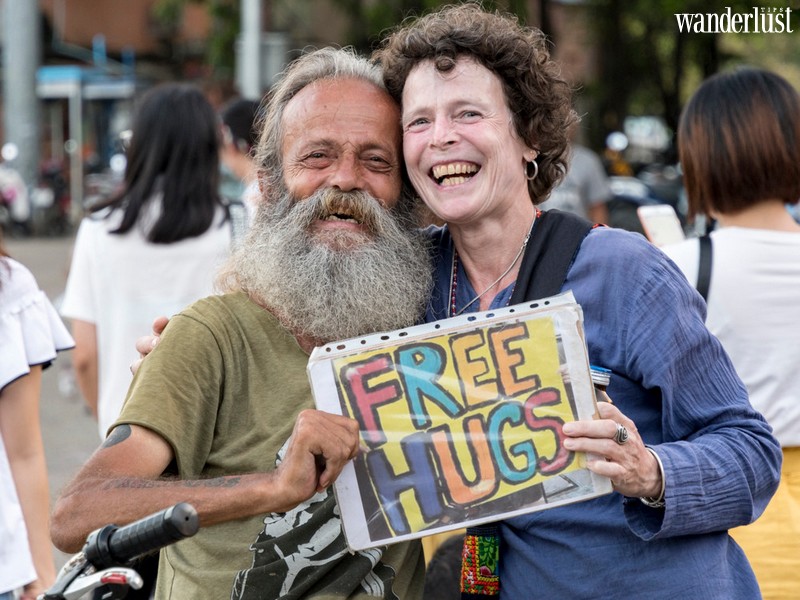 Luciano was born in Medona, Italy. From childhood to adulthood, he has been hurt by his closest relationships: “I’ve never had a happy family, I’m often neglected, so I get used to being alone” – he shared.

At the age of 30, he sold his house in Italy and went to live on a secluded mountain in the Himalayas. I was surprised to learn that he lived alone there for 17 years. He said, “Then, I still did not like human contact, I didn’t want to talk to anyone and only wanted to be left alone in my own world.”

He could easily have lived there for the rest of his life, but then, disaster struck seven years ago, when he had a motorcycle accident in India. The accident paralyzed his legs. He returned to Italy for medical treatment, only to be told that he would never walk again. “I didn’t want to believe it, I wanted to walk on my own two feet,” he recalled.

Luciano did some research and found hope for his legs in Thailand, which also suited his budget. Luciano decided to visit Chiang Mai to get treated with Mungkala (a traditional Thai acupuncture therapy). “My health gradually improved. At first, I had to walk around with two crutches, then only one. Now, I have this tricycle. I can stand, and can cycle. I feel much better,” he smiled. 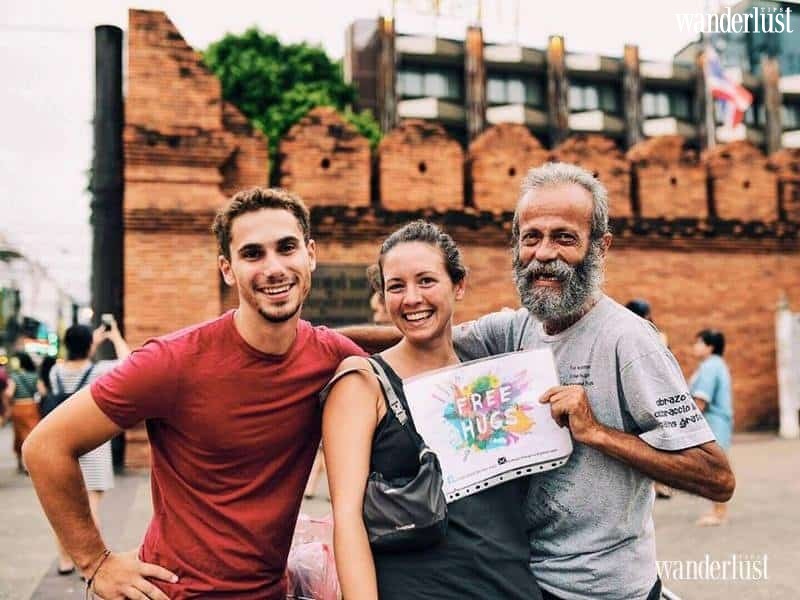 But Luciano retained the same feelings toward society, he’s still antisocial and didn’t want to talk to anyone. Until one day…

It was the holiday season a few years ago, and Luciano met an English man at the Tha Phae Gate on his way to Mungkala. This man and his family were giving out FREE HUGS. Seeing that Luciano was alone, he invited him to join them. “I tried to explain to him that I do not enjoy human contact, I want to be alone,” – Luciano recalled.

But the man refused to leave Luciano alone, trying to convince him: “We will make you feel that you never want to be alone anymore.” Each member in the family gave Luciano a warm hug. “My life changed. On Christmas Eve, I made an incredible decision, I decided to go out there and hug everyone – those who wish to give hugs in exchange for a warm smile.” That’s how he started giving FREE HUGS. 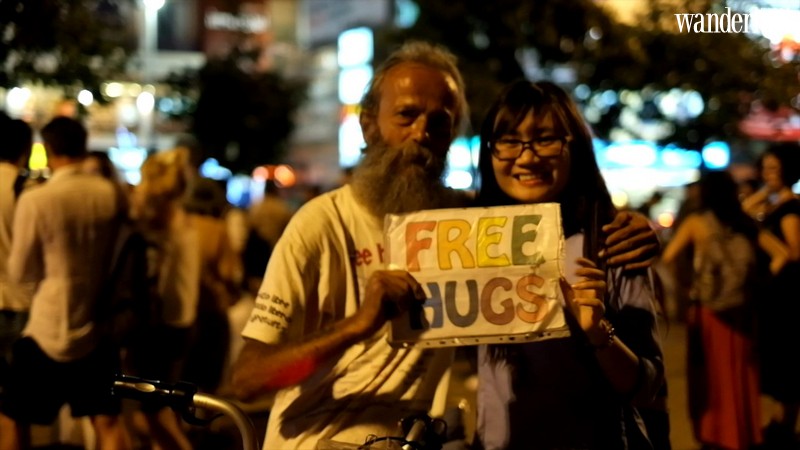 Every day at 9 a.m., he visits Tha Phae Gate and welcome hugs from strangers. This has become a daily routine for him. Luciano finds himself smiling more, finds more meaning in life, and makes more friends through free hugs. “A Japanese guy brought me a bottle of ointment and rubbed it on my hands. Another girl brought me cheese and crackers from Italy…,” he recalls.

I asked Luciano: “Has anyone ever refused a free hug?” and he answered, “Yes, you know, I’m a homeless man. Not everyone is willing to hug me. An Italian woman rejected me completely. When I reached out, she said ‘No, no, no, I don’t want to’. But I insisted ‘Come on, come on!’ She reluctantly embraced me and the next day, she sent me pictures of our hug. A long time after that, she came back and was willing to give me a really warm hug.”

There are sometimes reluctant hugs, they’re stiff, strained and fast. However, most of them are the warmest hugs, ones that I never got from my family or my son. This is the first time in my life that I find something meaningful. Every day, I give free hugs in exchange for smiles,” he said with a smile. “Free hugs – they’re wonderful. They changed my life.” 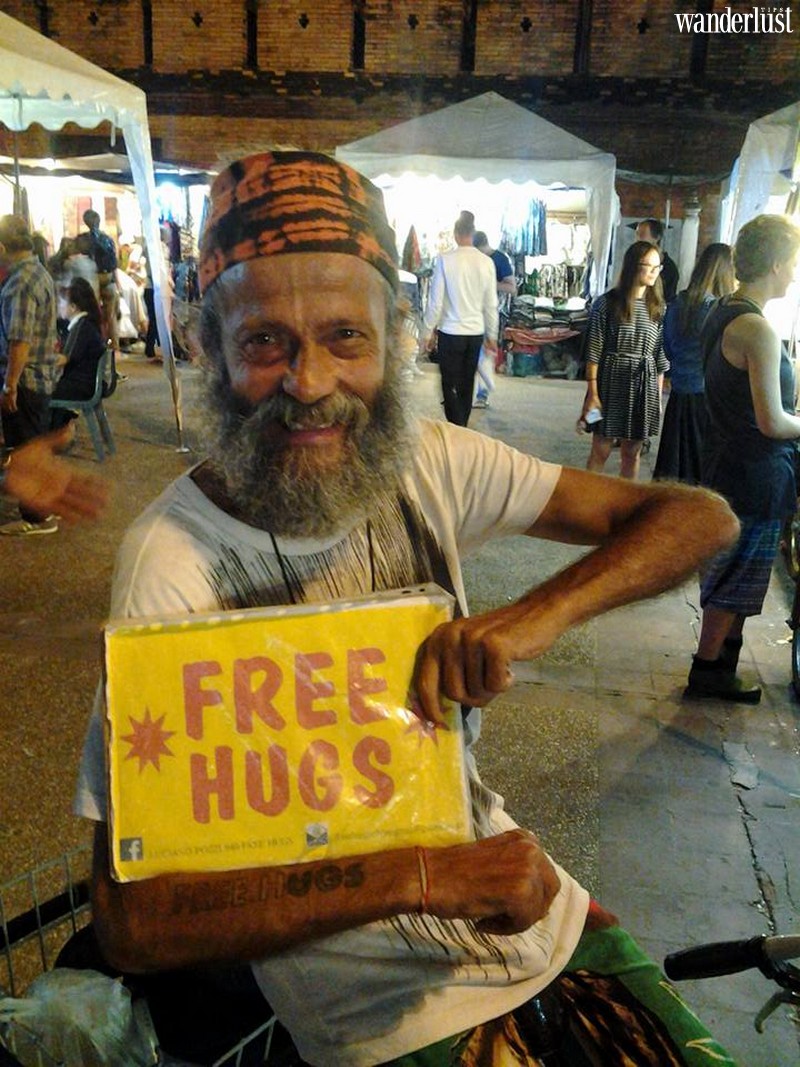 Sometimes, when I think about Luciano’s story, I wonder, “If he had never got into an accident in India, would his life had changed, or would he have continued his quite lonely days in an alienated place, tormented by his past for the rest of his days?”

Life sometimes presents us with things that at first seem like misfortunes, but oaks only become stronger in the crosswind and diamonds are made under pressure. 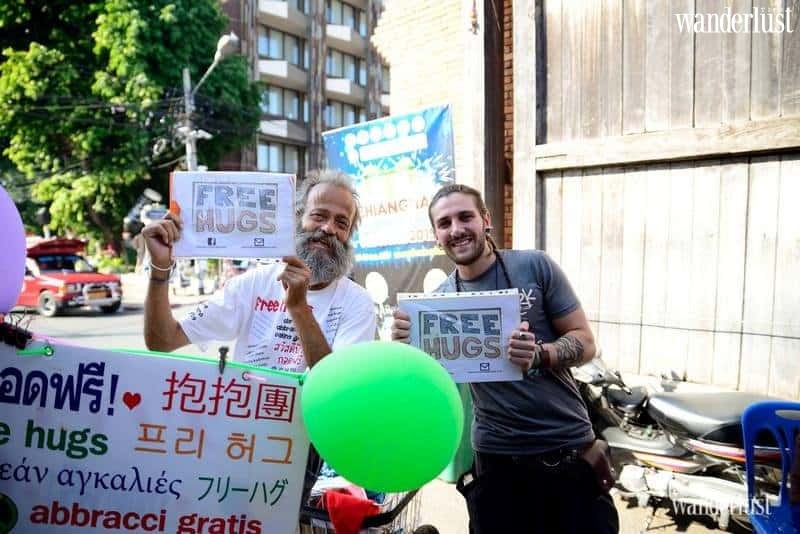 Every new land and every new journey brings me new encounters with incredible people. I learn to observe and to listen, and I collect stories and valuable life lessons. I realize that the world out there still has plenty of beautiful things to see.