A far cry from a hectic Hoi An on a sunny day, the captivating beauty and tranquil ambience of the ancient city during the rainy season is something to behold. 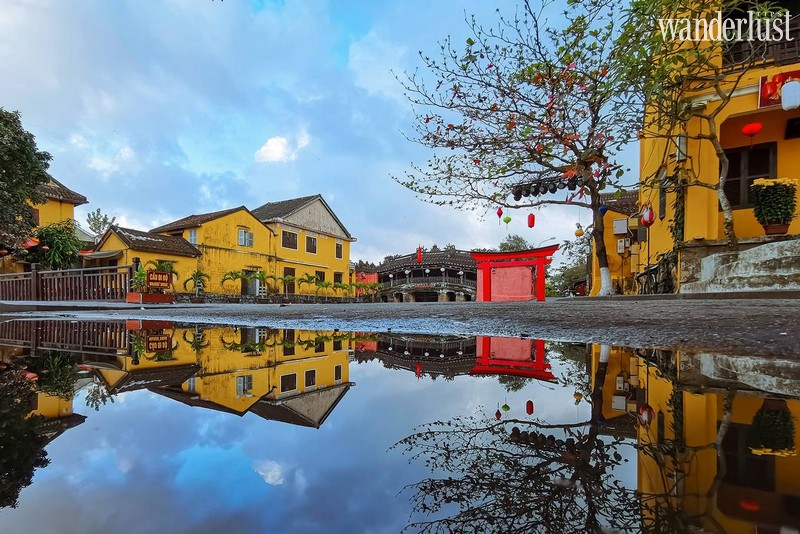 Hoi An is one of the most visited destinations for travellers to Vietnam. When thinking of Hoi An, visitors picture the beautifully ancient houses built side by side bathed in gloriously golden sunshine.  Hoi An is not only magnificent on sunny days but it also boasts an enthralling charm during the rainy season.

STREETS IMBUED WITH A SERENE AND CAPTIVATING BEAUTY 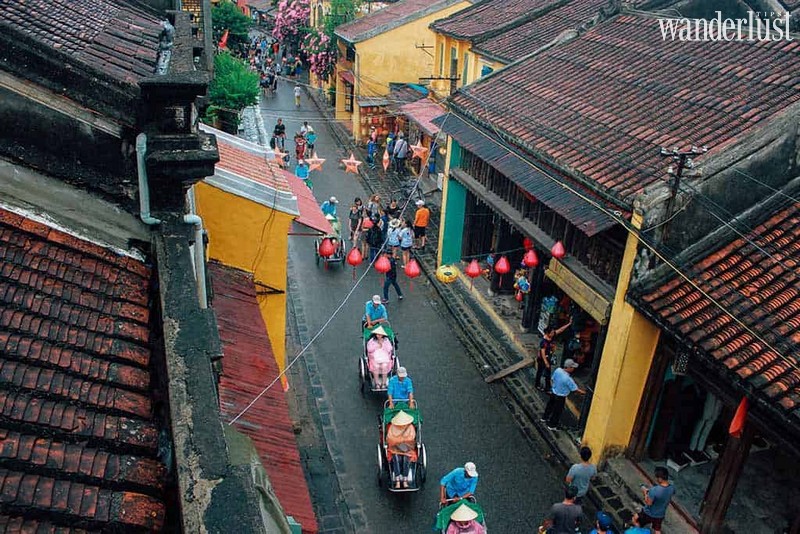 The peak time to travel to Hoi An is between February and May. During this time, the number of tourists travelling to Hoi An is extremely high and it can be difficult to fully appreciate the charming beauty of the ancient city. During the Tet holiday, Hoi An is often met with scattered showers, making it perfect for a relaxing stroll to enjoy the tranquil and serene atmosphere.

Hoi An is a clean city, there are not any factories, industrial zones and there is an interlaced traffic system to ease congestion. When it rains, this beautiful city is not affected by any unpleasant smells. Instead, the pleasant smell of rain mingled with the smell of incense creates an extremely unique atmosphere in the ancient city. 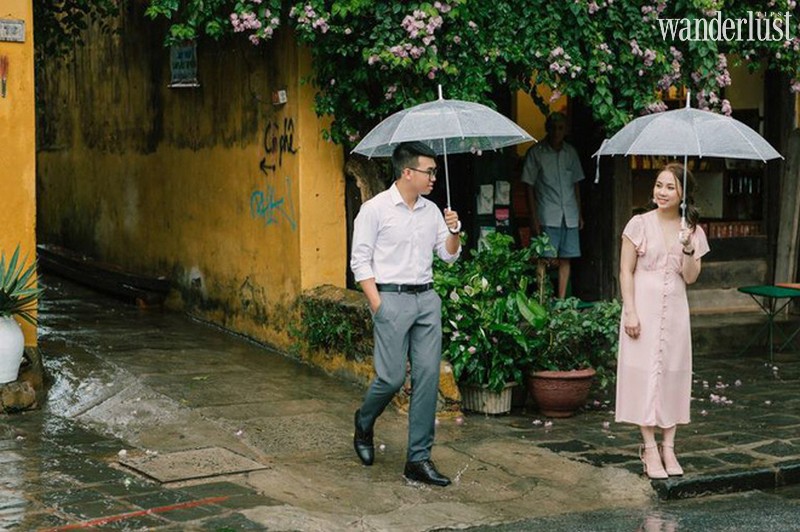 During the rainy season in Hoi An you can spend your time wandering through the streets to catch a glimpse of the colourful lanterns gently dangling in the rain and watch the rickshaws running along the peaceful streets as the drivers’ raincoats flap in the wind.

The cool fresh air in Hoi An will soothe to the soul and make you feel relaxed. Whether you travel to Hoi An by yourself or with a loved one, the rainy days will always leave you feeling calm and at ease. Exploring Hoi An in the rain can be a comfort to even the loneliest of souls or can make you fall harder for that special person in your life.

The number of visitors to the city decreases notably on rainy days making it a great time for visitors to meander through the streets. Especially, visitors can also gain a better understanding of the history and culture of the ancient city as well as having easy access to the local shops and eateries to try delicious delicacies without the need for queuing. 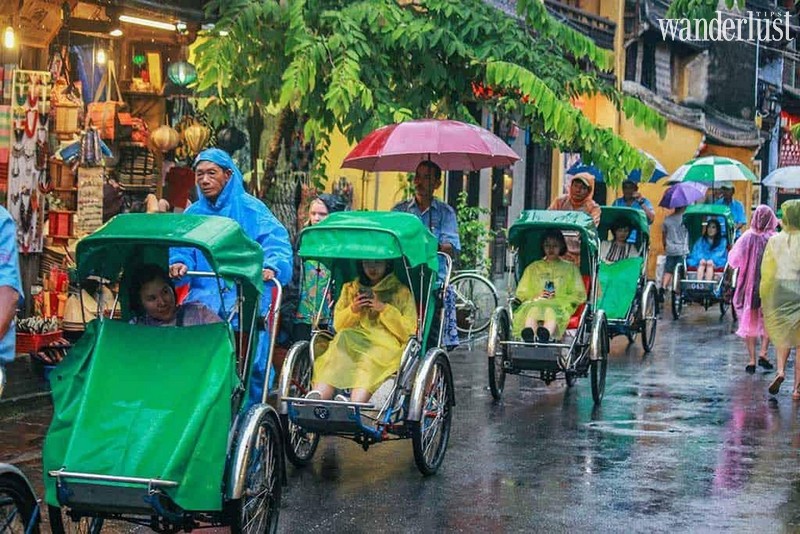 Incredibly, people often do not appear to be in a hurry when it rains in Hoi An. Everything slows down and becomes more gentle and serene than the usual bustling pace. Thus, if you are a photography enthusiast, you can easily capture stunning photos at every street corner.

It cannot be denied that Hoi An becomes even more beautiful after the rain. As the sunshine peaks through the dense foliage and sparkles on the roofs, the surrounding environment becomes even more magnificent. The small roads snaking through the ancient city are buzzing with people toing and froing and the gentle sunshine casts their shadows on the surface of the puddles.

The striking yellow walls have long been a romantic symbol of Hoi An, but even they become more alluring after the rain. Additionally, the sky will become crystal-clear after the rain. If you are a keen photographer and love nothing more than to be in front of the camera then you will have the chance to take many beautiful photos.

HOI AN – “VENICE OF VIETNAM” 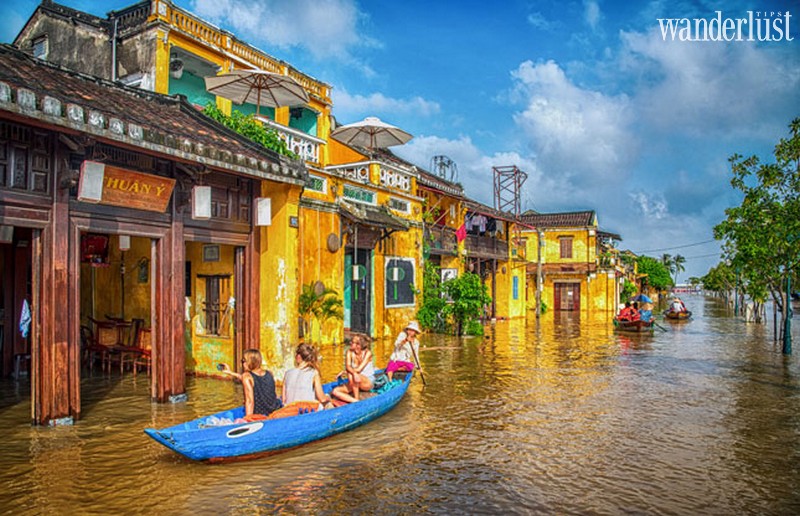 Hoi An is dubbed the “Venice of Vietnam” on rainy days, as the winding streets run alongside the river. Foreign visitors enjoy rowing and wading through the water.

In the early rainy season, Hoi An boasts an exquisite beauty. In addition to the traditional yellow houses, Hoi An is adorned with lush green moss and lungwort plants, forming a natural masterpiece. Many foreigners opt to stand in the rain to take photos of the green moss on the ancient houses. 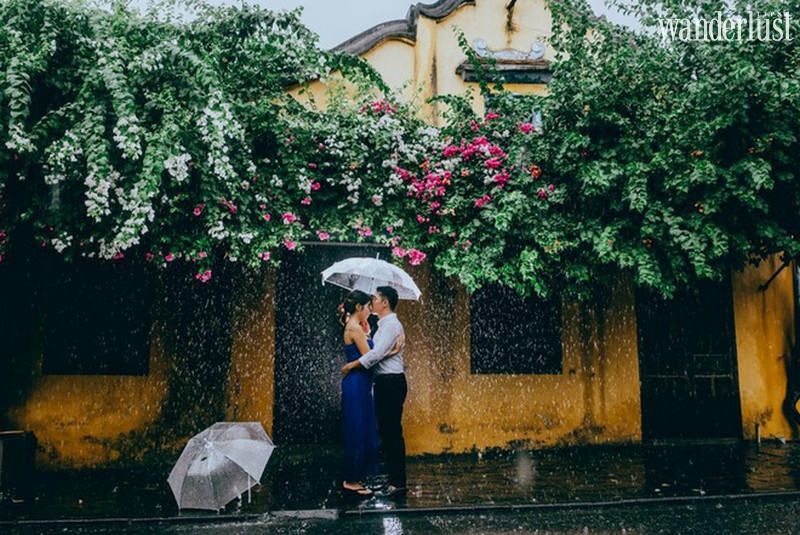 However, if you are interested in travelling to Hoi An in the rainy season, you should prepare all the necessary items including raincoats, umbrellas, waterproof shoes and bags.

During your visit to Hoi An in the rainy season, take the time to sip cups of hot tea at little cafés whilst listening to the gentle melodies and catching a glimpse of the ancient city nestled by the Hoai River. Your trip to Hoi An during the rainy season will definitely bring an amazing variety of fun-filled and unforgettable moments.