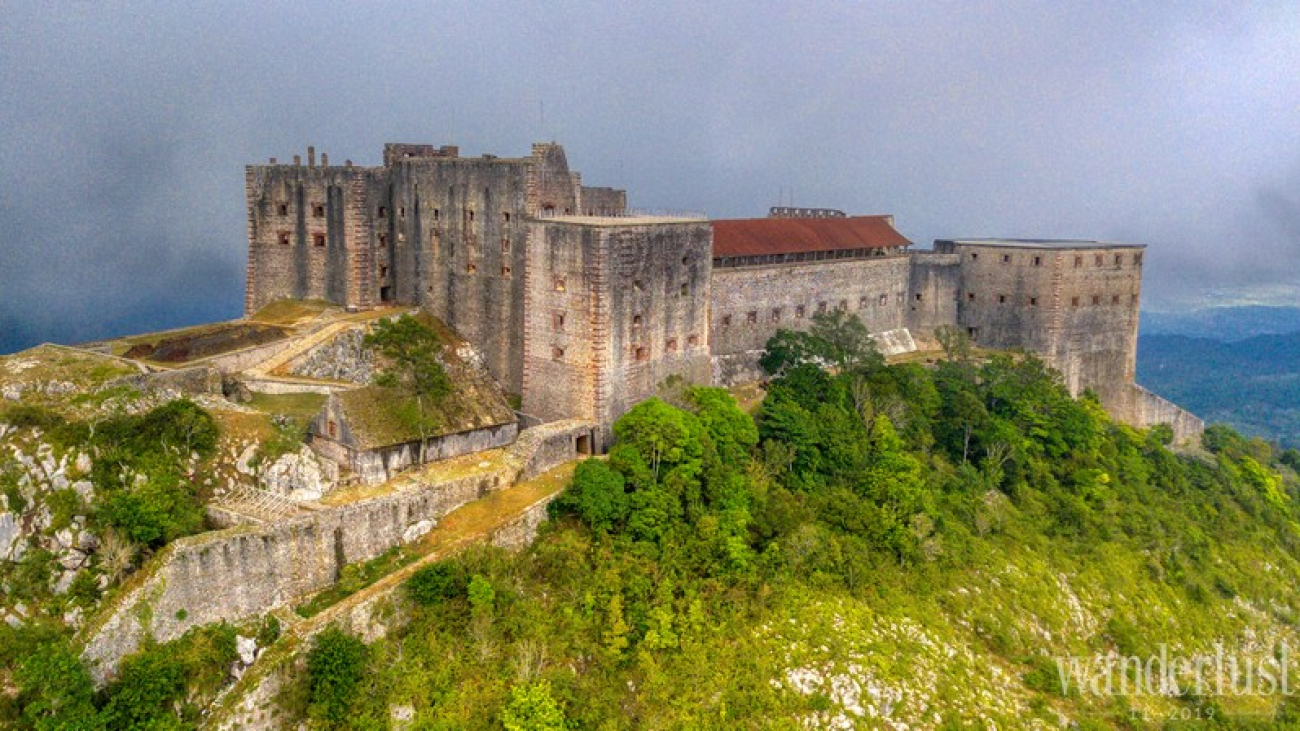 My husband and I rented a car for a self-drive trip around Haiti. We got to see many marvellous things during our trip including Port-au-Prince capital and Province Nord. We also stopped by Milot to admire the largest fortress in the Americas.

There are many stone fortresses in the world dating back to ancient times. In the past, almost all the fortresses were built for military use, so their architecture and location were always designed with this in mind. The aim was to display strength, so the fortresses were designed in a unique and magnificent architectural style equipped with an observatory and defence systems. Haiti is well known as the country of the fortresses. Due to the turbulent history of Haitian wars, Haitian people constructed many exotic fortresses.

THE HISTORICAL SIGNIFICANCE OF DEFENSIVE WALLS 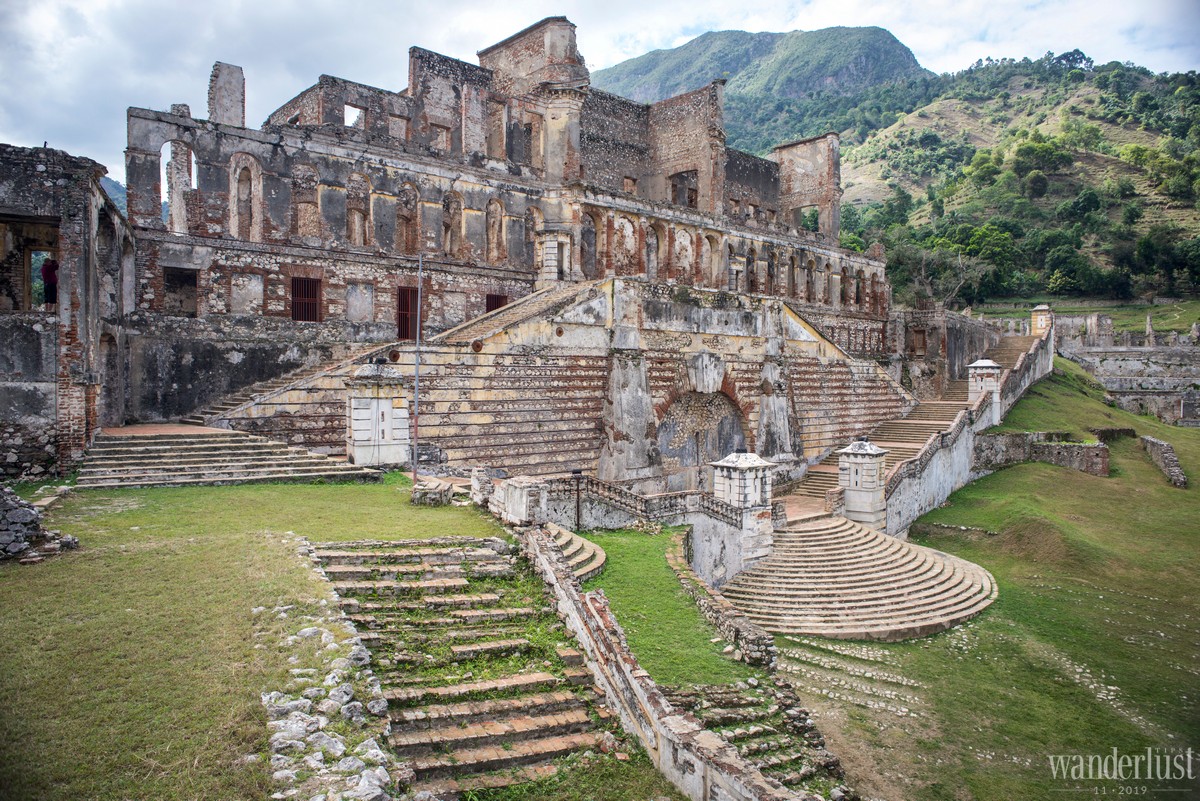 It took us nine hours to travel the 250-km route from Port-au-Prince to Milot because the traffic in Haiti was terrible. The closer we got to the outskirts, the worse the road became as it is mainly covered with gravel, rocks and is unpaved. Despite the tricky journey to find the largest fortress in Haiti, I was extremely surprised and excited. Measuring around 27,750sq. km, Haiti is home to hundreds of large and small fortresses. When travelling across the country, every 20km or so, the remains of an old stone fortress can be seen. Due to its geographic location and mountainous terrain, the ancient Haitians focused on building many stone fortresses at altitude to prevent foreign invasions. Therefore, stone fortresses have become a significant symbol of Haitian slave revolutions. Additionally, the stone strongholds built by a large number of slaves are embroiled with Haitian history.

In Port-au-Prince, after the impressive victory of the slaves in 1802, Jean-Jacques Dessalines – the leader of the revolution later proclaimed himself king. He also built five solid fortresses in succession and named the main fortress of the capital after himself. A huge effort was made to retain national independence due to the threat of Europeans returning to attack. Therefore, these strongholds and fortresses were pivotal in deterring the return of the French army. 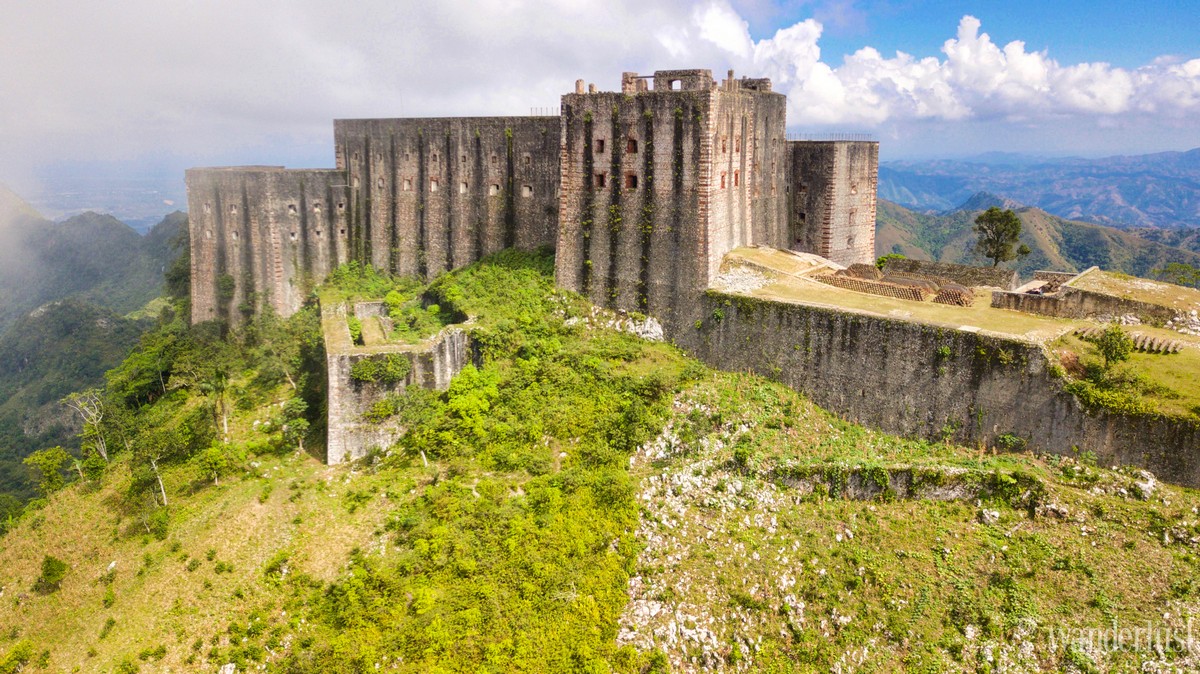 As an enthusiast of culture and history, I admire both intact cultural sites and the remnants of those which have been left in disrepair. As we drove through Saint-Marc which is home to many deserted palaces and ancient fortresses covered with vines, the untouched landscape reminded me of bygone times. Today, the place only features some remnants and ruins, but I know it used to be the great pride and refuge of so many people fighting for freedom. A feeling of mercy suddenly filled my heart.

ADMIRE THE LARGEST FORTRESS IN THE AMERICANS

After a long journey from Port-au-Prince, I spent a night in Milot. The following day, we continued our adventure to fully admire the beauty of Citadelle Laferrière and San Souci Palace. Citadelle Laferrière, or Citadelle Henri Christophe, or simply Citadelle, is a large mountaintop fortress in Province Nord, Haiti. It is one of the largest fortresses in the Americas and was designated a UNESCO World Heritage Site in 1982, along with the nearby Sans-Souci Palace. 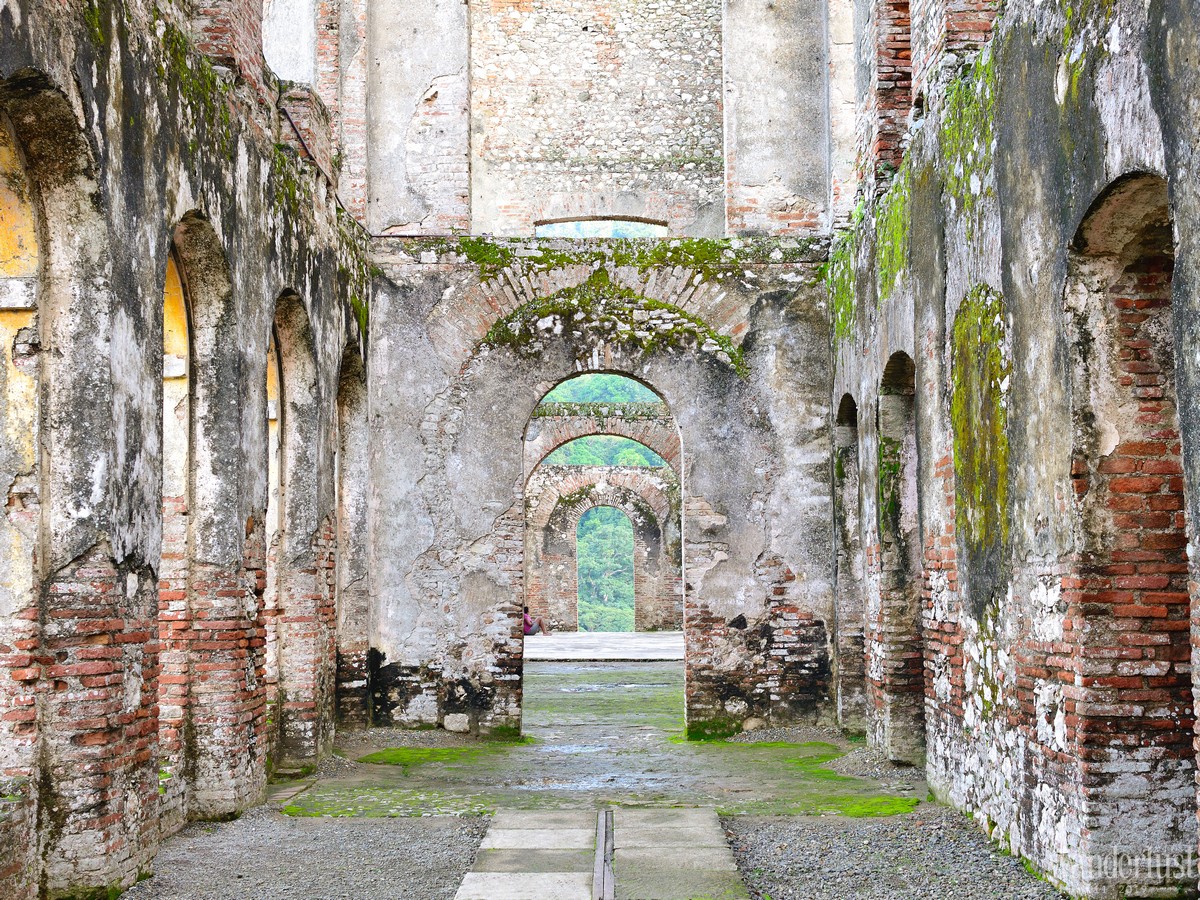 The ancient fortress was built by Henri Christophe – a key leader during the Haitian slave rebellion after Haiti gained its independence from France in the early 19th century. With its beauty and historical significance, this mountaintop fortress has itself become an imperative icon in Haiti. The images of the fortress have been printed on the currency, stamps and posters of the tourism organisation for many years. I have even seen the vivid images of the Citadelle Laferrière in street art.

Early the following morning, we drove about 8km from Milot to the foot of the mountain leading to the Citadelle Laferrière. From a steep path paved with rocks, there are two ways that you can reach the mountain including a 30-minute walk or a horse ride for about USD10 per person. Although walking made my legs tired and riding a horse made my bottom numb, I found the experiences were so great. It is also very easy to find a local guide who can speak multiple languages.

The winding slope cuts through the lush green forest like a giant snake. In summer, the green hills and mountains are dotted with brilliantly red phoenix flowers. Thanks to the sunshine and wind, the tropical land is home to an abundance of beautiful phoenix flowers. 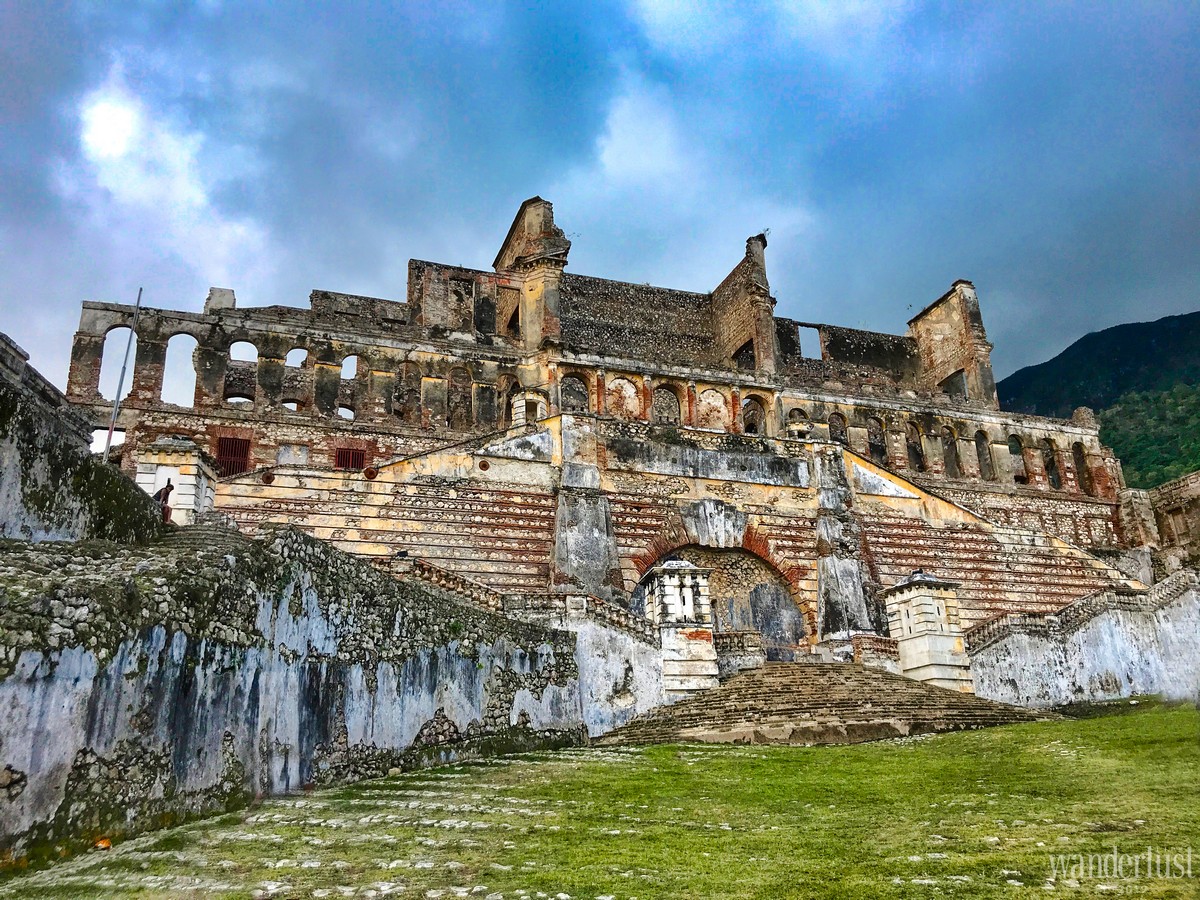 With an area of over 10,000sq. m, this massive stone structure was built by 20,000 workers between 1805 and 1820. The entire building was designed deftly and carefully. Due to an amazing variety of different angles, multiple vantage points that can be easily accessed. As a result, the direction of the cannons could be altered if attacked. The 40-metre impenetrable stone walls of the fortress were constructed by mixing mortar, lime, molasses and cow blood. 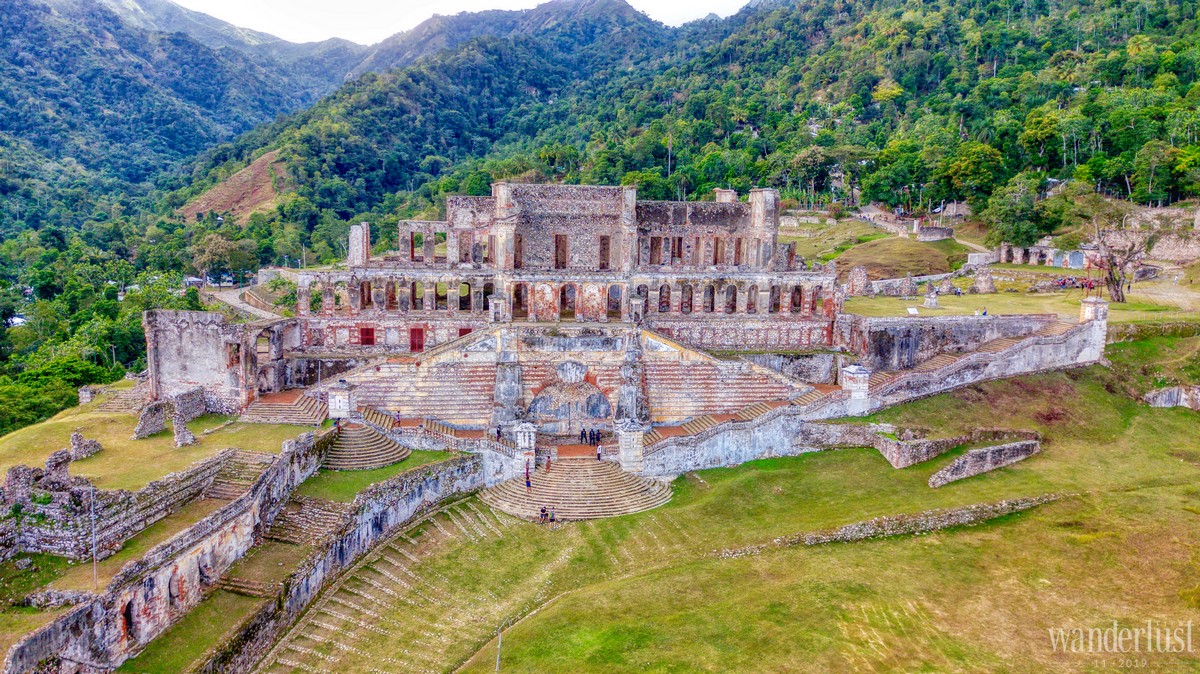 Inside the fortress, there was a water storage tank and a warehouse. According to the guides, they could store food for more than 5,000 people a year. The fortress also included many palaces for the kings and his family in case they needed a refuge. They also stocked more than 300 large cannons with royal badges from the 17th century that are still kept there.

Thanks to all the strategic plans of the Haitian king at the time, the French never returned or invaded. Today, the Citadelle Laferrière still stands, boasting a spectacular beauty amidst the wild forests and mountains.

The Haitian Embassy in Vietnam is located at 44/4 Van Bao Street, Ba Dinh District, Hanoi City. You can make an online visa application or easily apply for a Haitian visa at the embassy at a cost of USD75. However, there is no direct flight from Vietnam to Haiti, hence you need to carefully check in-transit visa procedures.

With the hilly and mountainous terrain, Haiti is home to many narrow and steep roads. Thus, you need to consider when choosing your mode of transportation. In Haiti, you can rent a car for around USD40 a day and self-fill the tank with gasoline. If travelling here for the first time, you should hire a driver because of the Haitian roads. For short journeys, you could save money by taking a Tap Tap, a vehicle resembling a motorbike in Vietnam. Negotiate the price before booking, it should cost around 50 Haitian gourdes (=VND12,500) for 2km.

Haiti is a tropical country with lots of sunshine. You should wear a wide-brimmed hat and sunscreen during your trip. It rains very a little in Haiti.

You do not need to worry about eating in Haiti as the spices and dishes here are very palatable. A meal in a restaurant costs an average of USD15. Haitian cuisine is a rich blend of wild African flavours and sophisticated European cuisine. It is undeniable that the French culture had a huge influence on Haiti. Not only do the Haitians use French as their official language but they also have their meals with cheese, bread, butter and a wealth of French desserts.