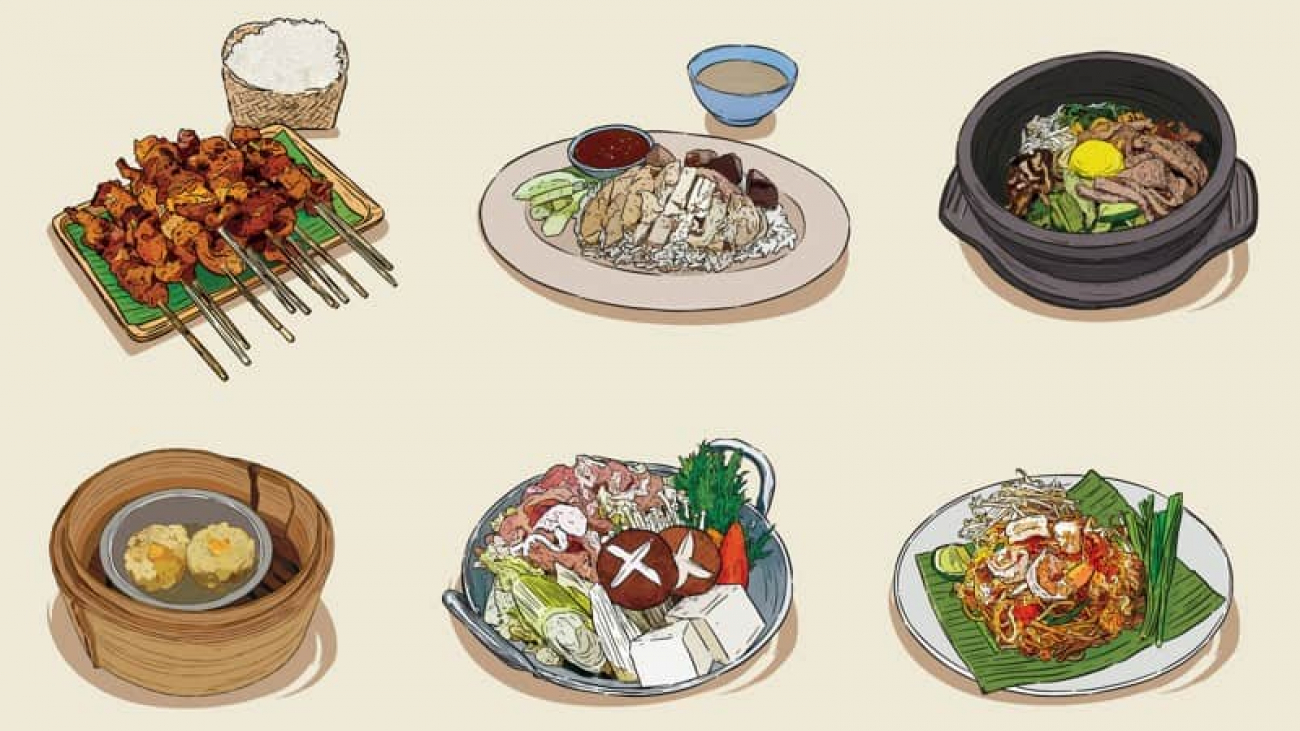 Asian cuisine intrigues foodies far and wide due to its rich array of flavours, sophisticated cooking methods and unique twist inspired by each different country. Travelling to Asia will allow you to embark on the most unforgettable food experience, where you will be spoilt for choice with an amazing variety of world-famous delicacies.

It is said that Thai cuisine is the pièce de résistance of Asian cuisine that is traditionally famous for the perfect and balanced combination of five primary tastes infused in every dish – sour, sweet, bitter, salty and spicy. Treat yourself to popular Thai dishes and immerse in a gastronomic sensory experience. Connoisseurs of Thai food are aware of the country’s fascinating concept of “juxtaposition of tastes”. This means that Thai food is judged not only by the excellent combination of different ingredients and spices but also by the signature colour of each dish. Red dishes due to chillies will set your tastebuds on fire, yellow dishes are vividly eye-catching and exotic while green plates will definitely awaken your appetite.

There is a significant difference in Thai culinary style between North, Central and South regions. In spite of geographical dishes, each region will make its own signature mark on diners. Thai cuisine is recognised through its regional variations and abundant flavours. Many Northeast dishes are influenced by Lao cuisine, using sticky rice as the main dish, accompanied by meat, salad, fish or insects. Meanwhile, in Northern Thailand, due to the influence of Myanmar culture, Thai residents do not appreciate sweetness and sourness and instead love the spiciness. Central Thai cuisine is the harmonious combination between regional ingredients and spices, influenced by the royal cooking style. In the South, most dishes are combined with coconut and spices, making it more suitable for all palates. 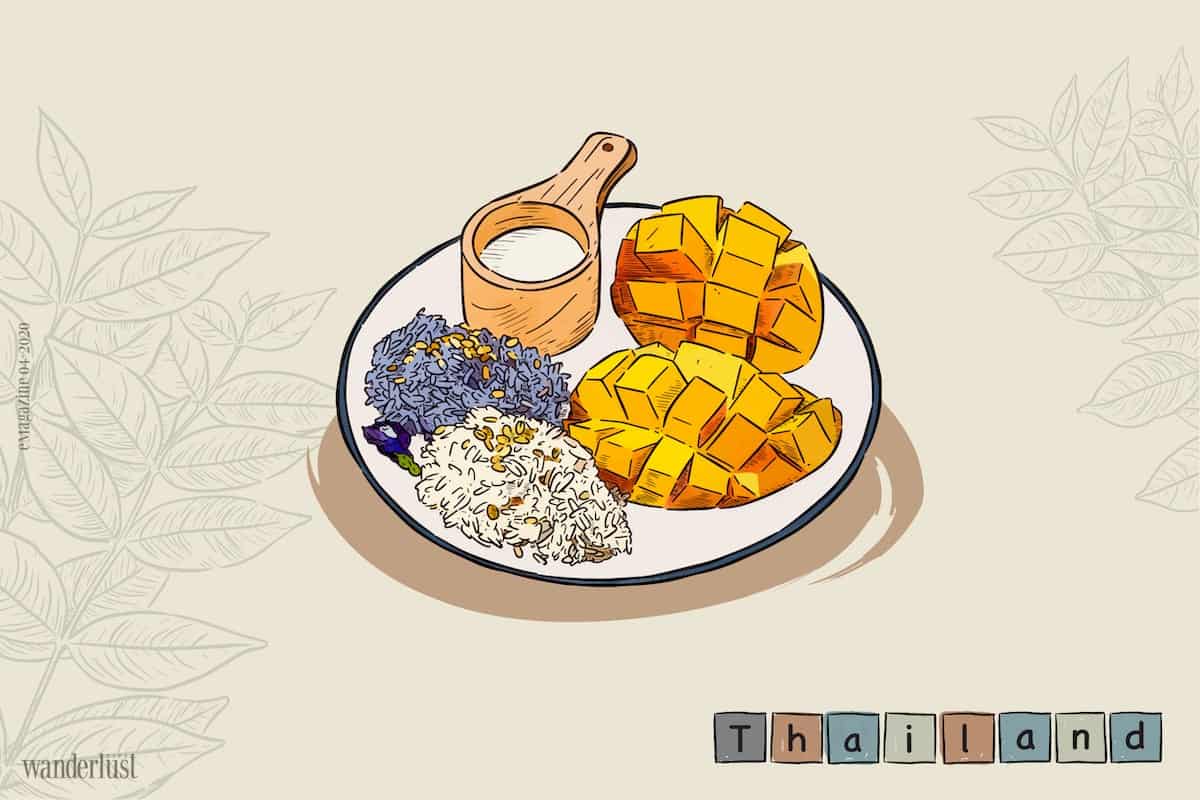 Chinese food is considered the most fascinating culinary culture in both Asia and all over the world thanks to its rich flavours and classic savoury dishes. There is a Chinese saying that “food is heaven for the people”. In China, foreign diners will have the chance to take off on an exhilarating food journey with a vast array of rich, aromatic and visually artistic dishes cooked by talented chefs. Chinese cuisine is as varied as the country’s long-standing customs, traditions and geographical regions. Every region bears a very distinct culinary style, making for an interesting cultural experience for tourists to enjoy and explore.

Classically, authentic Chinese cuisine is divided into eight distinct cooking styles. Shandong cuisine is characterised by the prevalent use of onions and garlic. What’s more, stir-frying and steaming are the most common methods of cooking in China. Sichuan dishes are famous for their spiciness and are perfectly combined with other key flavours, for instance, sour, bitter, salty and sweet. As for Cantonese cuisine, diners will be amazed by the diversity of both ingredients and precise cooking methods. Especially, Jiangsu cuisine focuses on the delivery of refined gourmet food that achieves nutritional balance and promotes health and comfort with stewed dishes and soups. Aside from these four great cuisines, Chinese cuisine captivates many diners with abundant regional cuisines in Zhejiang, Fujian, Hunan and Anhui. 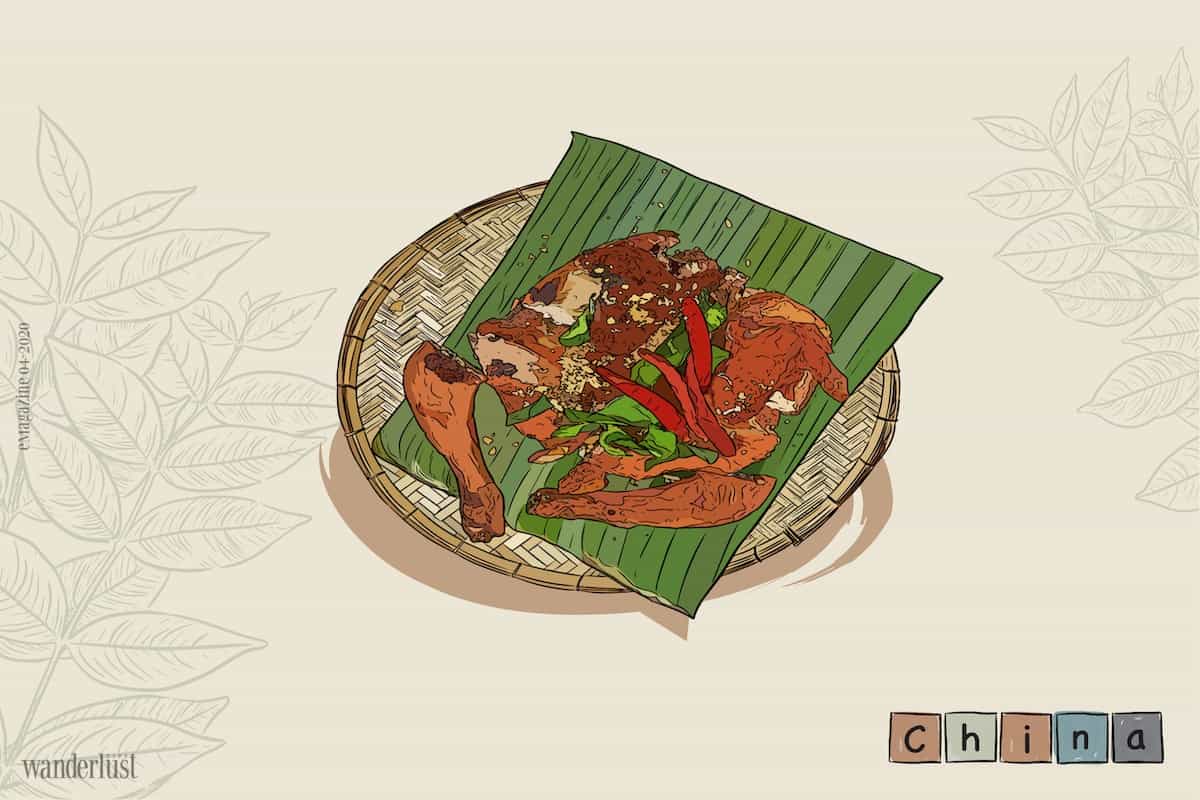 EMBARK ON A UNIQUE CULINARY EXPERIENCE IN TAIWAN

Despite being heavily influenced by Chinese culture, Taiwanese cuisine holds its own and is becoming one of the most captivating culinary hotspots amongst Asian countries. You will be surprised to learn where you can enjoy delicious Taiwanese dishes. A far cry from other Asian countries, Taiwan is home to an incredible diversity of street-food eateries and small roadside stalls. Take a stroll around the popular walking streets and you will definitely be mesmerised by the enticing range of mouthwatering street food. It is said that Taiwanese food has diners falling head over heels for its exciting culinary style.

Taiwanese cuisine is also a rich variation of Japanese cuisine as for 50 years it was, in fact, a colony of Japan. Additionally, Taiwanese cuisine was considerably influenced by Southern China cuisine. Many different iconic tastes are combined in one bite of a Taiwanese dish. Aside from plenty of signature savoury dishes, sweets and desserts, Taiwan has won widespread praise for the uniqueness and deliciousness of their food across Asia. For instance, bubble tea is renowned for its flavourful creativity and has become one of the most popular drinks in the world. If you are a fan of milk tea, then stopping for a signature cup of milk tea at a roadside stall is a must on your Taiwan travel itinerary. 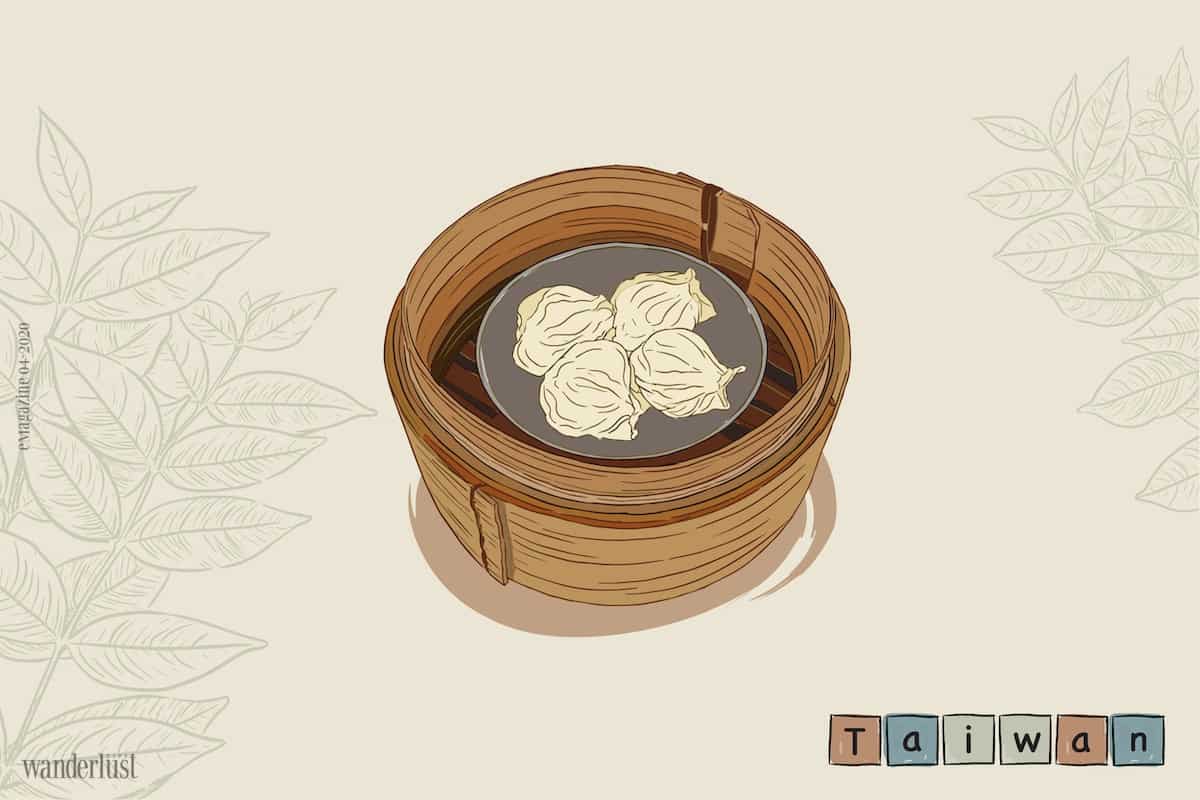 If every Asian cuisine was to have a distinguishable colour, then red would be the colour of Korean cuisine as chillies are the most prevalent ingredient in most Korean dishes. Korean food is an interesting mélange of different ingredients, exotic spices and aesthetic preparation, making it an appealing culinary experience for foodies the world over. What’s more, Koreans make conscious and nutritious decisions when it comes to food preparation to improve their health.

Traditional Korean meals usually come with side dishes called Banchan to accompany rice. A staple on every Korean dining table, kimchi (chilli pickled cabbage) embodies the identity of this Asian cuisine. Moving away from the traditional dining table, diners in Korea are also captivated by the vibrant street food culture. There is nothing better than wandering through the bustling streets, stopping by the street food stalls and chowing down on Tteokbokki and “giant” Odeng (Korean fish skewers). Take a trip to Korea and have a fun-filled and unforgettable experience in this beautiful country. 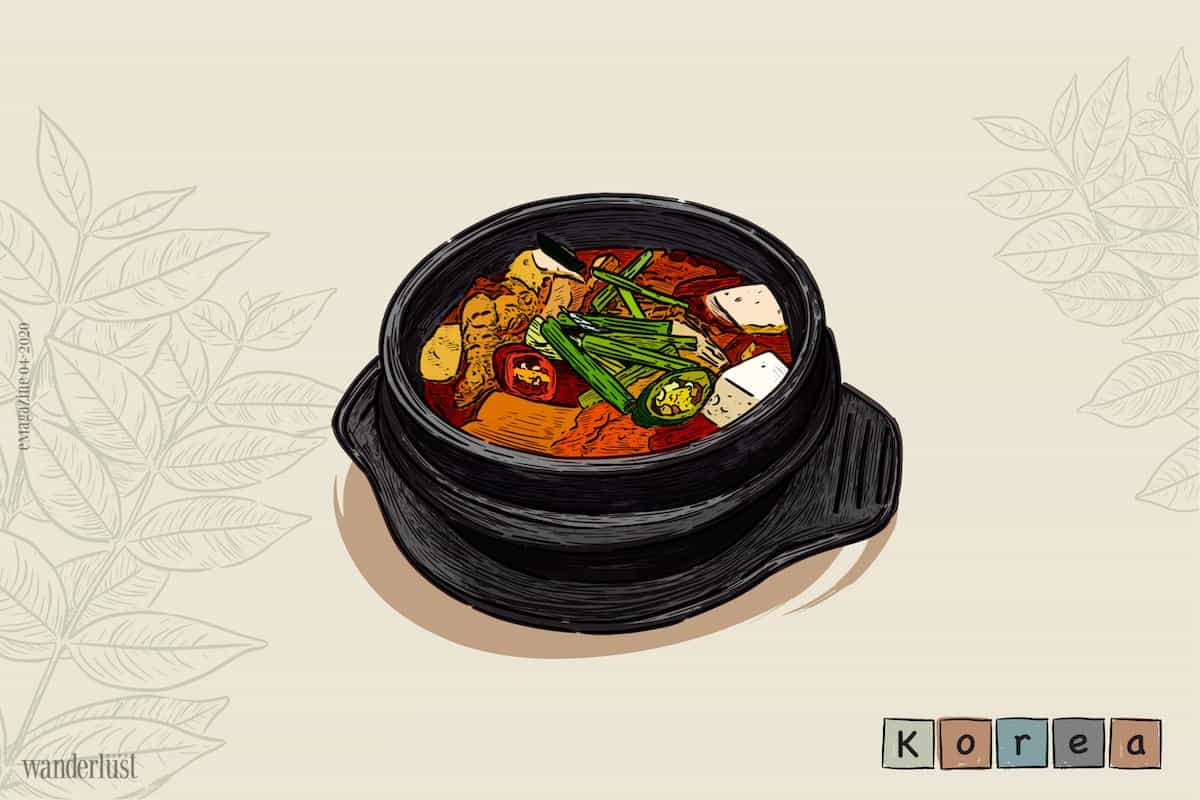 THE DELICATE FLAVOURS OF JAPANESE CUISINE

Like many of the world’s highly developed cuisines, Japanese cuisine celebrates and highlights pure flavours, delicate textures and attractive colours due to its long-lasting traditions and diverse cultures. Japanese food is a harmonious fusion of various cuisines, including classical Chinese and modern Western. Thus, you may see an amazing variety of Western dishes on a Japanese menu. Japanese cooking incorporates the freshest, natural ingredients and highlights the purity of food.

As well as exquisite flavour and visual beauty, fresh and high-quality ingredients are an extremely important element in Japanese cooking. Most Japanese-inspired dishes tease the tastebuds by using five cooking principles, including colours, flavours, cooking techniques, senses and rules. A far cry from other Asian cuisines, Japanese cooking does not mix different food types to further enhance the purity of the food and spices or sauces which are normally served in separate dishes as dipping condiments. Japanese dining etiquette will also make you appreciate the exquisite culture and customs of this splendid country. 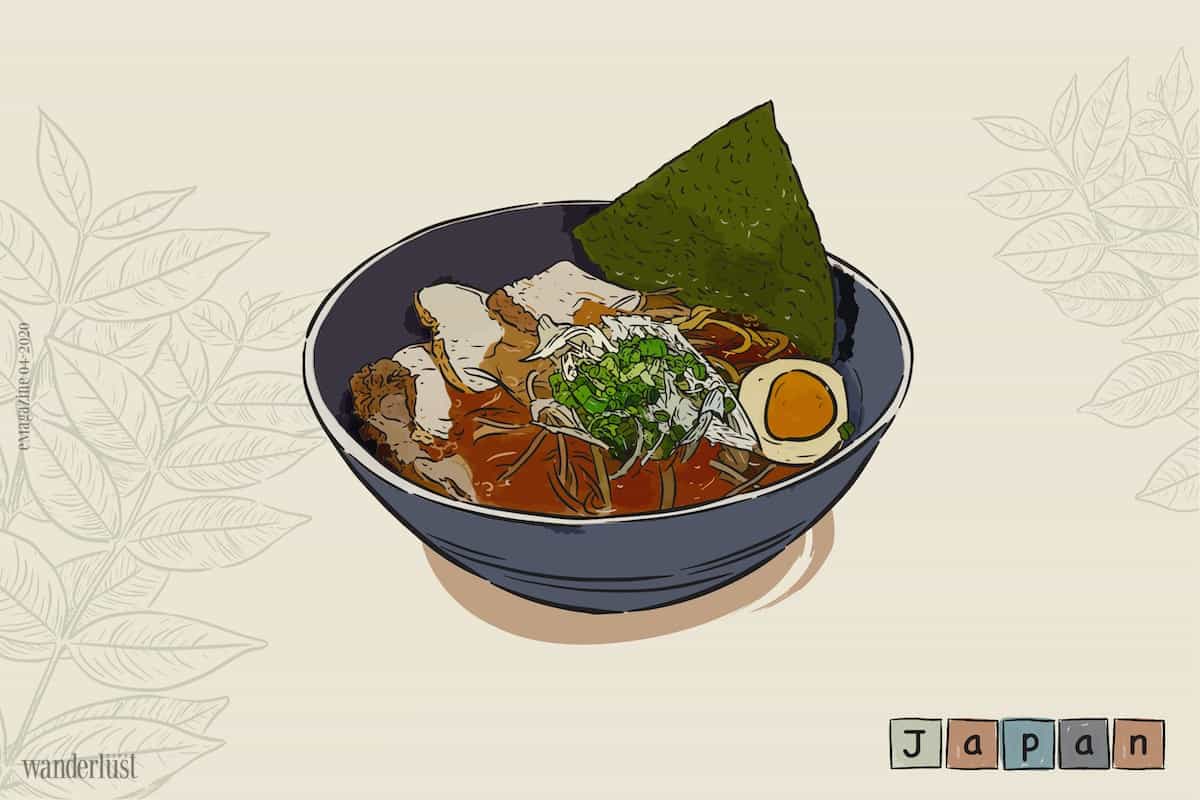 In recent years, Vietnamese cuisine has become increasingly popular, attracting a large number of regional and international foodies. Vietnamese dishes are not renowned for their aesthetics like Japan nor the nutritious ingredients like Korea nor meticulous cooking techniques like China. Instead, Vietnamese cooking is an excellent blend of regional spices and raw ingredients to create a sense of distinct simplicity and elegance, leaving diners in awe of the authentic culinary creation.

Vietnamese cuisine is not only home to a plethora of delicious everyday meals, but it also embodies the local culture that is unique to Vietnamese people. Travelling around Vietnam is the most delicious way for you to explore and experience the distinctive flavours of Vietnamese food. The dishes of the Northern region are both savoury and mild and are considered the country’s culinary icon. Meanwhile, because of the cultural and culinary influenced from China, Cambodia and Thailand, the Southern residents have a true love for sweet and sour dishes. Especially, the Central delicacies are characterised by fiery spiciness and saltiness. Vietnamese cuisine is a great national pride and has been making its mark on the world due to its delicious taste and rich aroma. 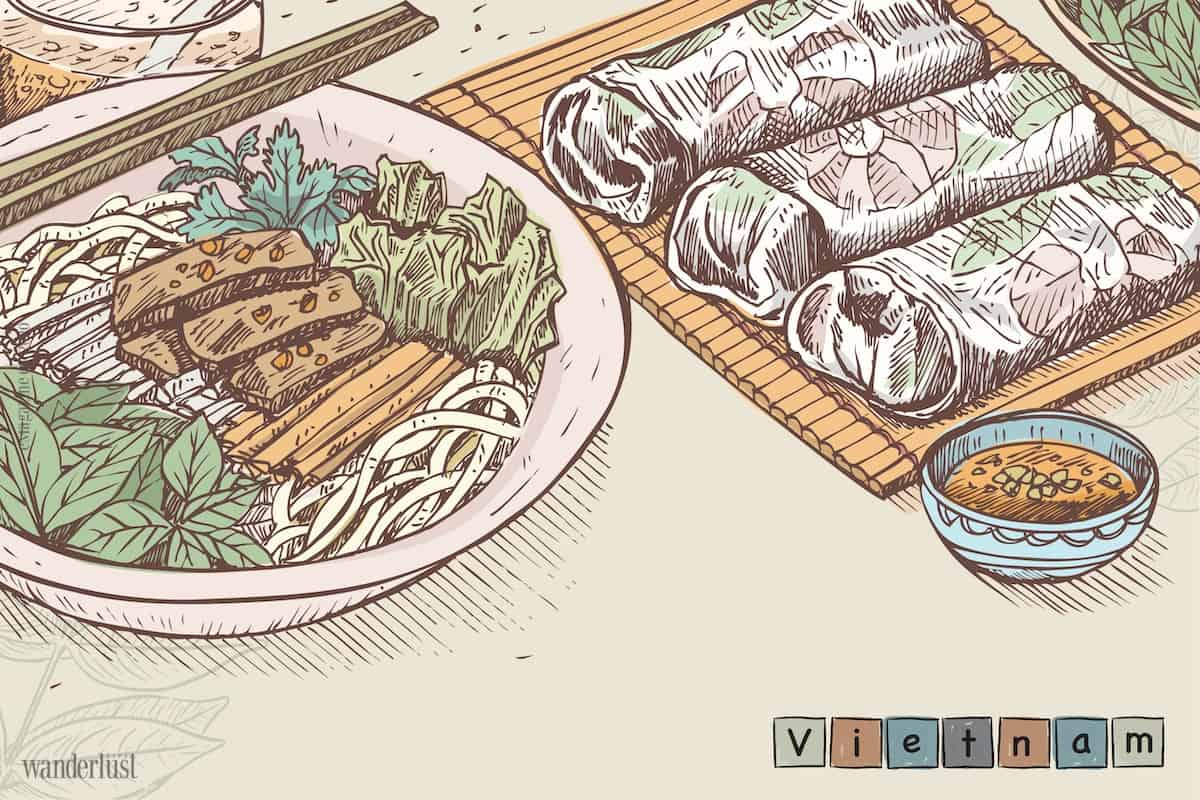