Pho has long been a national traditional dish and is eaten regularly by Vietnamese people. The Vietnamese have always had a special place in their hearts for Pho and this has always intrigued foreigners. Only when you taste the authentic regional food for the first time, can you understand and appreciate the uniqueness and deliciousness of Vietnamese Pho. 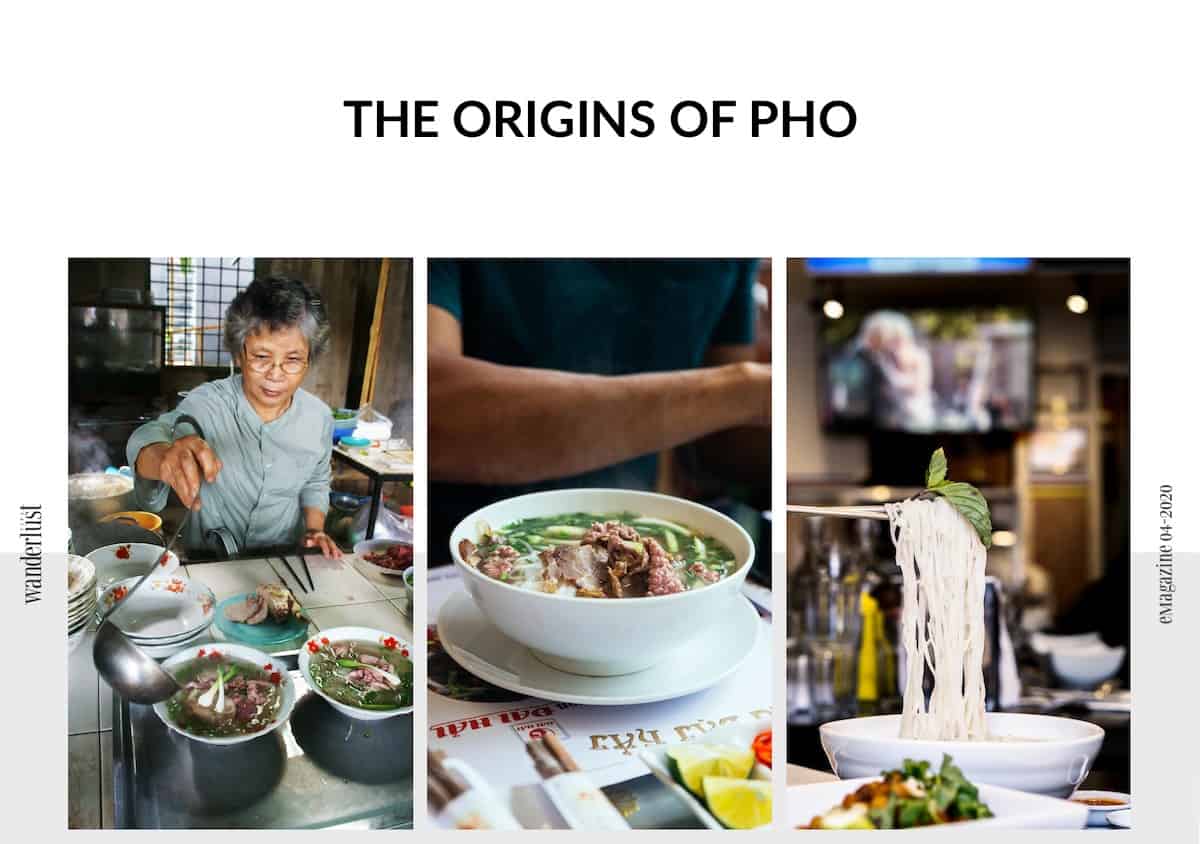 When thinking of Vietnam, Pho – the national pride of Vietnamese cuisine – immediately springs to mind. Nevertheless, many people have no idea about the history of this delicious dish.

There are many different stories about when Pho first appeared in Vietnam. There is a view that Pho was derived from a Cantonese dish called “Nguu Nhuc Phan”  (beef noodle soup). Another theory suggests that Pho was inspired by French culinary influences. Pho could be an adaption of the French beef stew, named Pot-au-feu (French pronunciation: pɔ.to. fø). However, if you compare these two dishes, it is clear that there is a significant difference in flavours and cooking styles. A reasonable explanation of the origin of Pho stems from the Vietnamese noodle soup, “Xao Trau”. A dish simply made with slices of buffalo meat cooked in broth and rice vermicelli. It was the perfect concoction of ingredients, cooking skills and flavours, however, vendors swapped beef for water buffalo and flat rice noodles for round rice vermicelli.

No matter how many theories about the origin of Pho, it is obvious that Pho is a typical dish of Tonkin cuisine which was made popular on the streets of Hanoi and Nam Dinh. Pho first made an appearance in the early 20th century. It could be found on nearly every street corner of Vietnam, from the North to the South, people could easily savour a delicious bowl of Pho at a market stall or a vendor store. Moreover, Pho has gradually won widespread praise in America and Europe for its unparalleled culinary taste.

Over time, people have begun to know Pho as a dish made from rice with a flavourful mélange of soft sliced beef and bone broth. Thus, Vietnamese noodle soup has been recognised as the best Vietnamese dish over the course of years. Vietnamese novelist and short story writer Thach Lam paid homage to this dish in his book “The 36 Streets and Guilds of Hanoi”. He wrote: “Pho in Hanoi is better than anywhere else. A bowl of delicious Pho must be the authentic classic Pho and cooked with beef. The broth must be clear and sweet, the noodle strips should be flexible but not crushed, the beef has to be crunchy but not chewy. Especially, the accompaniment of chilli, lemon, onion, fresh herbs, black pepper and ca Cuong makes it just right.” 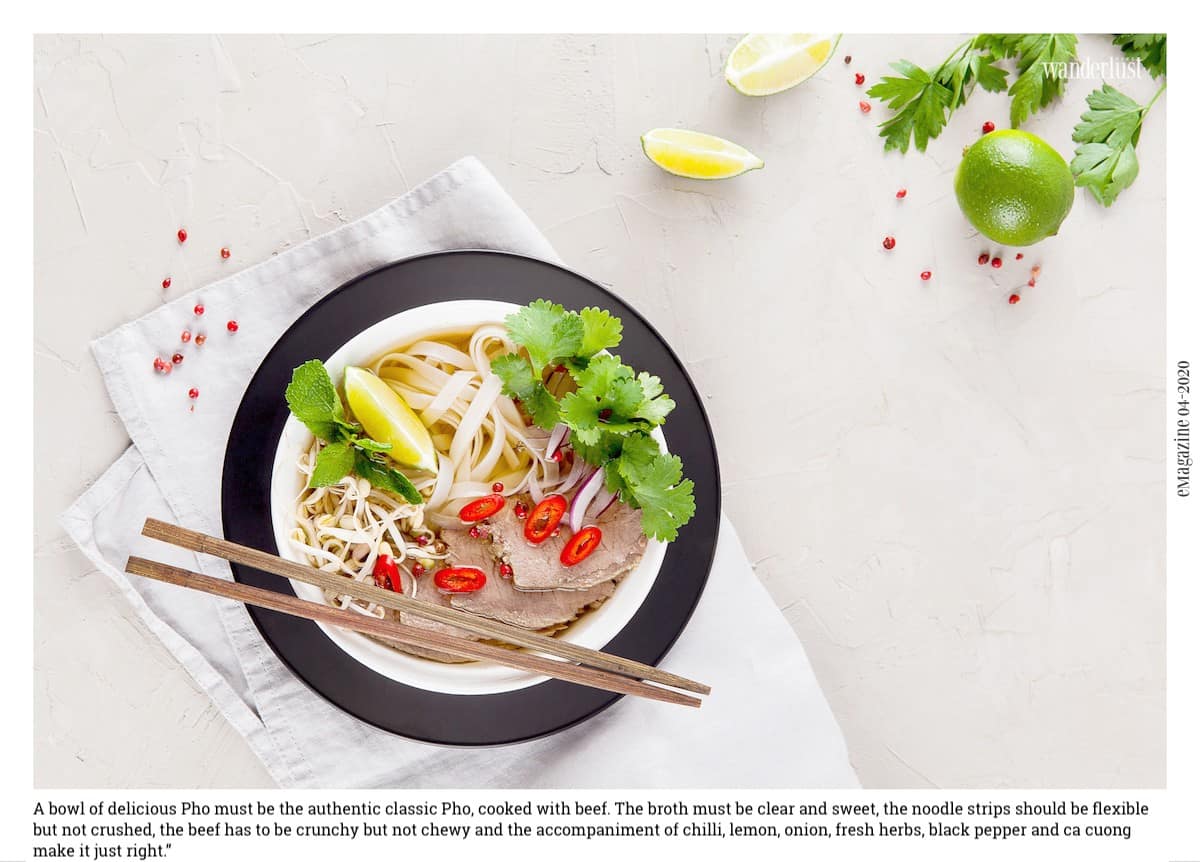 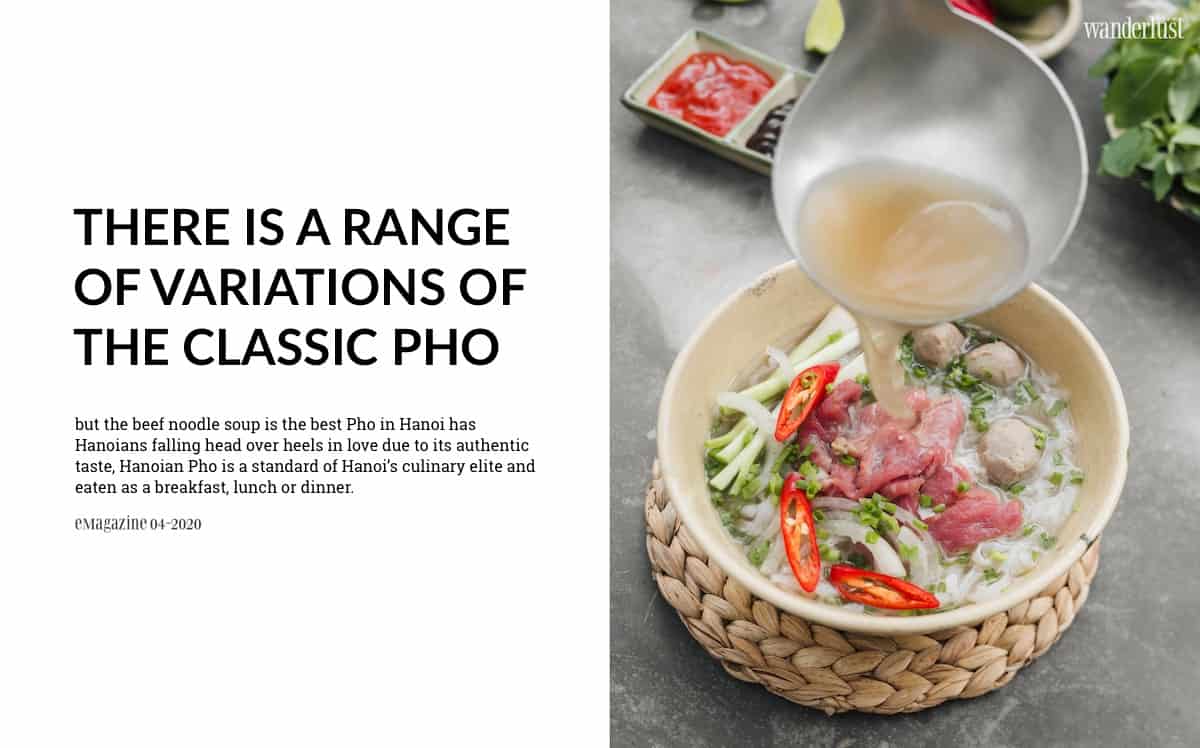 Are you hungry and looking for a quick meal? Stop by a roadside restaurant for a delicious bowl of Pho. Aside from the traditional beef noodle soup, there is a vast array of other versions of Pho, for instance, chicken Pho, Pho with beef stewed in red wine, Pho topped with a saucy beef and vegetable stir-fry, mixed Pho and Pho Cuon (fresh rice noodle rolls filled with stir-fried beef and many kinds of herbs). Thanks to the varieties available, picky eaters will be spoilt for choice and they can embark on an authentic culinary experience in Vietnam.

After chowing down on a tasty bowl of Pho, then you could take off on a journey back in time to the Vietnam War. During the war, scarcity forced Pho shops to make noodle soup without meat. The locals mockingly called this meagre soup Pho Khong nguoi lai, literally “Pho without a pilot”. As life becomes more interconnected and accessible, it is easy to stop at a shop on the roadside and order a bowl of delicious Pho and the long list of beef Pho options, including well-done meat (chin), medium rare (tai), flank steak (nam) and fatty brisket (gau). You will never forget the delectable taste of the fragrant cow broth, thin slices of beef, rice noodles and spices such as lemon, chilli, vinegar, pepper and herbs. The most attractive Pho dish is garnished with chopped spring onion.

“Pho is a speciality of Hanoi. You can taste it in other places, but only in Hanoi can you truly have delicious Pho.” Some people do not eat Pho very often, nonetheless, the dish remains a firm favourite, but is just reserved as a treat to order in a restaurant. Pho in Hanoi has Hanoians falling head over heels in love due to its authentic taste, Hanoian Pho is a standard of Hanoi’s culinary elite and eaten as a breakfast, lunch or dinner. 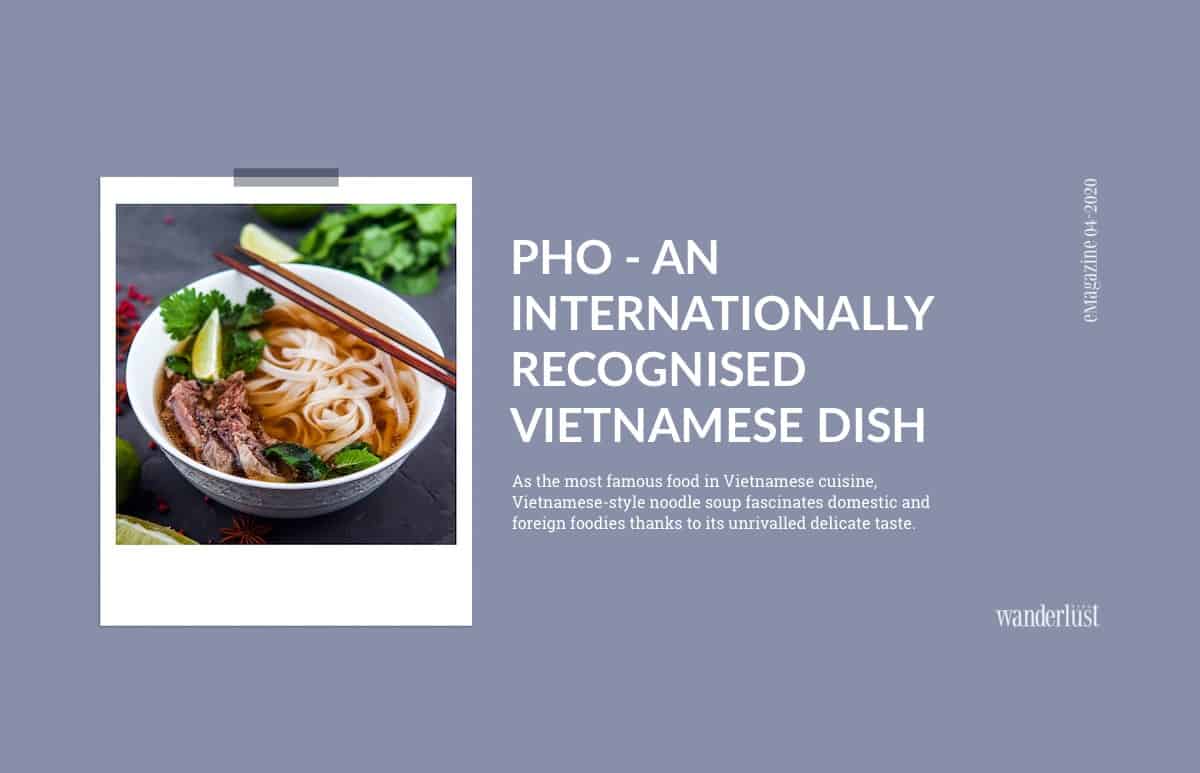 Nowadays, Pho is not only a dish eaten daily but it also embodied the elegant and sophisticated style of Vietnamese traditional cuisine. Pho has gradually become a must-try delicacy for every tourist travelling to the capital of Vietnam. Forecast to be one of the most world-famous dishes, Vietnamese beef noodle soup has been making a huge effort to tantalise the taste buds of every diner.

As the most famous food in Vietnamese cuisine, Vietnamese beef noodle soup fascinates domestic and foreign foodies thanks to its unrivalled delicate taste. Before the 2000s, Vietnamese Pho was introduced in many Western countries, especially in America, but at that time, it was not paid much attention. In America, a range of Pho restaurants was opened to serve Vietnamese ex-pats and travellers. Nevertheless, these Pho restaurants have been developing and progressing well over the course of time. Thus, Americans are gradually growing to love Vietnamese food.

In 2000, Former President Bill Clinton and his daughter paid an official visit to Vietnam. He had a really great time experiencing Vietnamese culture and enjoying two bowls of delicious Pho. After that, the beef noodle soup has gradually drawn foreigners’ attention to Vietnamese cuisine. They were so curious about the distinctive taste of the dish that “Pho” has officially been added to the Oxford English Dictionary. Pho, an iconic dish of Vietnamese cuisine, has been highly praised on a global scale, recognised as the best noodle soup in the world. Pho has been getting rave reviews from global travel magazines, for instance, CNN, Business Insider and Lonely Planet. Wherever Vietnamese beef noodle soup is introduced, it makes an extremely good impression on every Pho lover. Notably, Pho Thin officially opened in Japan last year, the restaurant attracted a large number of customers. In particular, the 4th April was chosen as the day of Vietnamese Pho in Japan. Additionally, Vietnamese beef noodle soup has been popularly introduced on foreign films and TV shows as it is a really delectable and attractive dish. There are so many beautiful words to describe this exquisite dish. 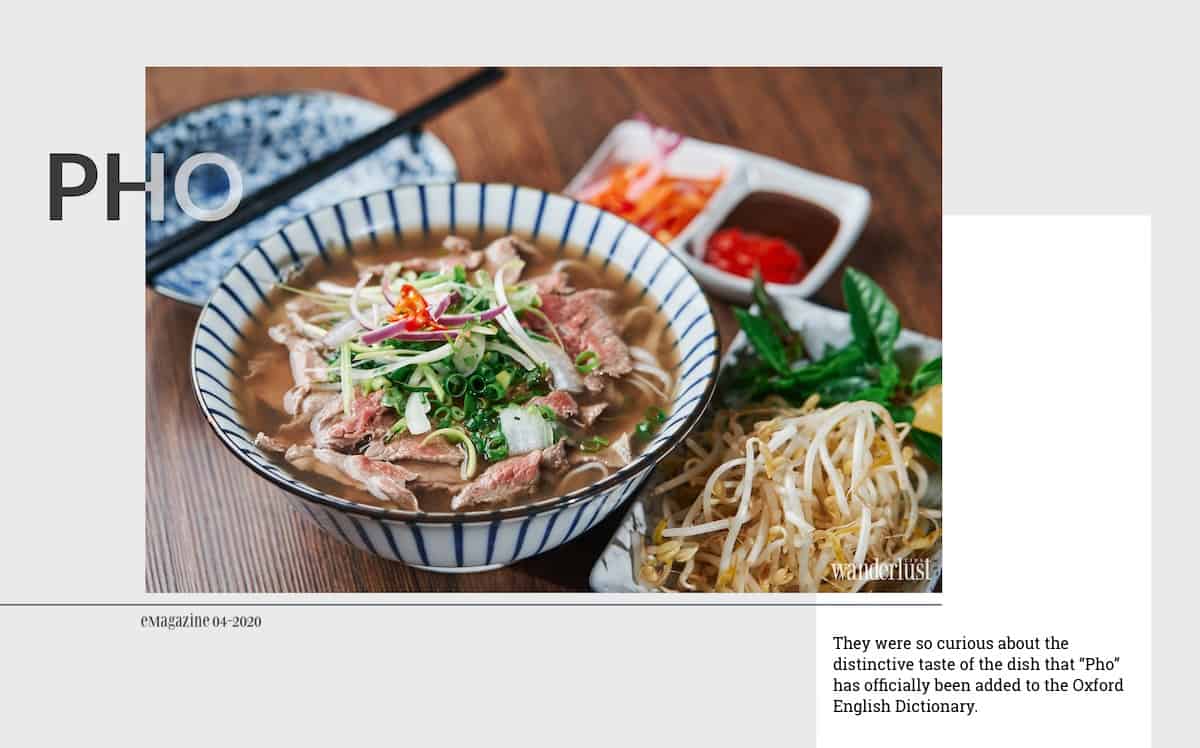 Until now, Vietnamese Pho has been making its mark on the world with more and more people raving about savouring a bowl of Pho due to its delicate sweetness and rich aroma. It is said that Pho –  the “muse” of Vietnamese cuisine and many other traditional delicacies is taking off across the world as the national pride of Vietnamese people.