One of the first thing a person talks about Japan‘s cuisine is sushi. A dish that has become so widespread and popular that almost everyone in the world knows about. Almost everyone in the world knows what sushi is, but what exactly is it? Is that an umbrella term that catches every dishes from Japan with raw fish and vinegared rice, or there is a variety of it? Let’s dive in and see what exactly constitutes the most famous Japanese dish.

The long history of sushi

Dating back thousands of years, sushi was cited in Japanese literature as early as year 718. Back then, it was called zakonosushi or zatsunosushi (“雑鮨五斗”), similar to the modern narezushi, had strong and unpleasant odour, because the fish used at the time was not raw, fresh fish, but fermented fish. Through time, the fermentation process was shortened, and to this day skipped entirely. Nowadays variations, often accompanied with nori, seaweed made into sheet, only became famous in the 18th century during the Edo period. During this time, different variations, resulted in modern-day dish that we all know and love. 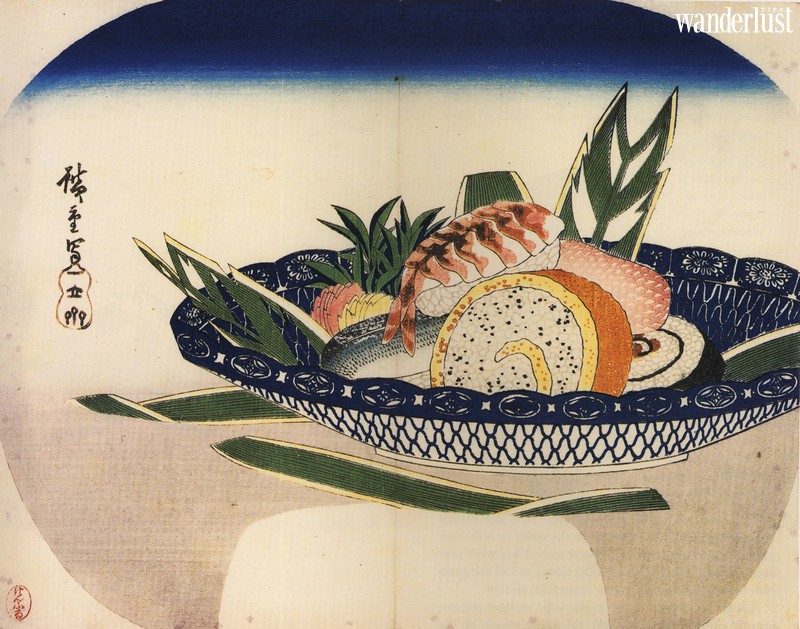 The most typical combination that constitutes what to be called “sushi” will have seafood, most commonly fish, and vinegared rice. Other fillings, toppings, condiments and preparations vary greatly, but most commonly include soy sauce, gari (sweet, pickled ginger) and drink with tea. Wasabi on the other hand, can be substituted by imitation wasabi, made from horseradish, mustard power and dyed green, which can mimic wasabi’s taste with a notably cheaper price.

Get to know your sushi

To prepare, the chef will start by shaping a small amount of vinegared rice into an oval ball, then drape the toppings over the ball. The topping is commonly fish such as tuna or salmon, served with a bit of wasabi. Other types of toppings include octopus, freshwater eel, sea eel and squid. 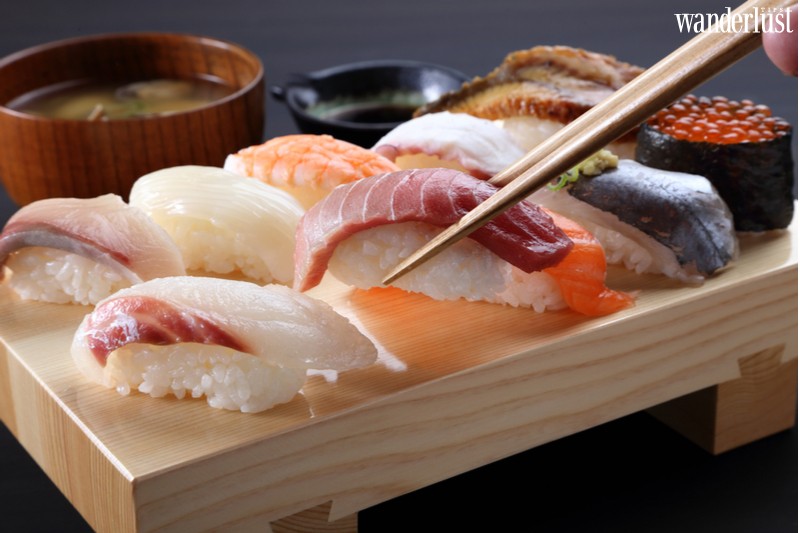 Gunkanmaki is a specialised type of nigirizushi, where a strip of nori is wrapped around the vinegared rice ball to form a vessel-like shape. The toppings are usually loosely or finely chopped, which explains why it has a nori wrapping. This special variant was created in 1941, that paved the way for soft topping use in sushi. 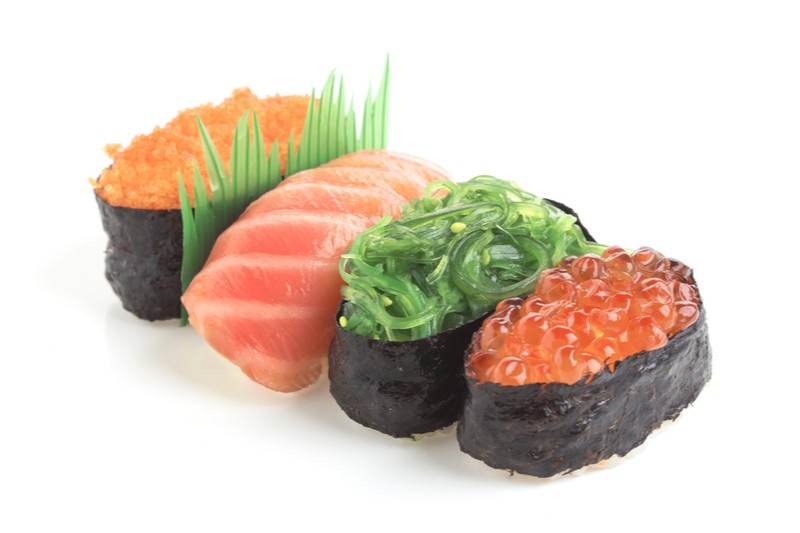 Makizushi is a type of sushi with vinegared rice, fish, cucumber and pickled radish, tightly wrapped into a cylindrical shape by a sheet of nori. The roll then sliced into 6 or 8 pieces and dipped with soy sauce. Makizushi bears certain similarities with Korean gimbab, however gimbab does not contain raw ingredient. Makizushi is one of the most well-known sushi, with many variations created both in Japan and around the world. 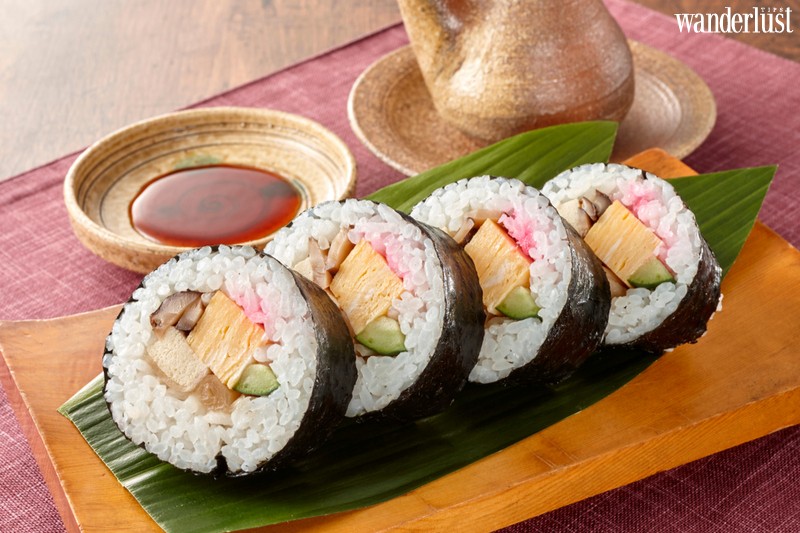 Inarizushi is the only type of sushi that only has vinegared rice alone and does not contain any raw ingredient. Legend says that Inarizushi was named after Shinto god Inari, whose messenger, the foxes, are believed to like tofu. 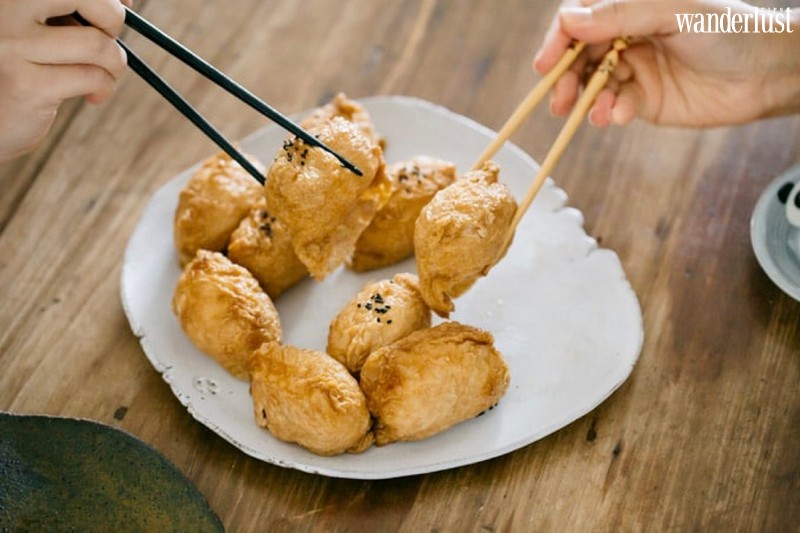 Chirashizushi is a type of sushi serves in a bowl, with a bed of vinegared rice and topped by a variety of raw fish and vegetables. It is commonly eaten because it is filling due to its large rice content, fast and easy to make. Chirashizushi is also served as ceremonial food as well, commonly eaten in some of Japan’s national holidays,  Hinamatsuri (Girls’s Day) and Children’s Day (子供の日, Kodomo no hi). 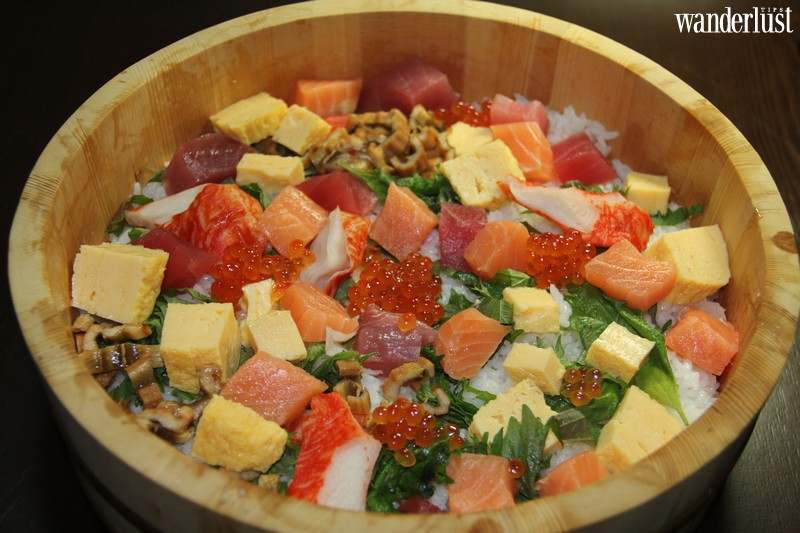