Once upon a time there was a city in which people never went out showing their real face. Everyday, they became a different person with the help of intricate masks. This city was Venice and until the 18th century, anyone not wearing a mask when going out was considered strange. Today Venice is not only the city of a hundred bridges but also the city of a thousand masks. Examples of these are displayed in almost all souvenir stores along the canals.

Venice’s masks: A symbol of freedom

Every February during Carnival, Venice transforms into a medieval city complete with exceptional decorations and colourful masks. Held for the first time in 1162, the festival was meant to eliminate discrimination between social, ages, wealth and genders. Masks became the spirit of the festival as they allowed everyone to be equal behind them. Some felt confident they could hide their shame behind the masks when confessing their love, others wore masks to do stupid things without recognition and judgment. The concept became so popular with Venice’s citizens that they wore their masks daily, though they were not yet intricately decorated.

More and more people used the anonymity provided to avoid being identified when committing crimes or not to damage the honour of noblemen when fencing, gambling, breaking into monasteries of nuns or visiting brothels. So during the 18th century, Venice forbade citizens from wearing masks on the street except during festivals or important holidays. People were prohibited from carrying weapons when wearing masks, prostitutes were banned from wearing them and gamblers were not allowed this camouflage. Anyone violating the law was sentenced severely. The fine was 500 liras and men would receive penal servitude on ships for 18 months, while women would be struck and pulled along the street from San Marco Square to Rialto Bridge before being pilloried at the central square. 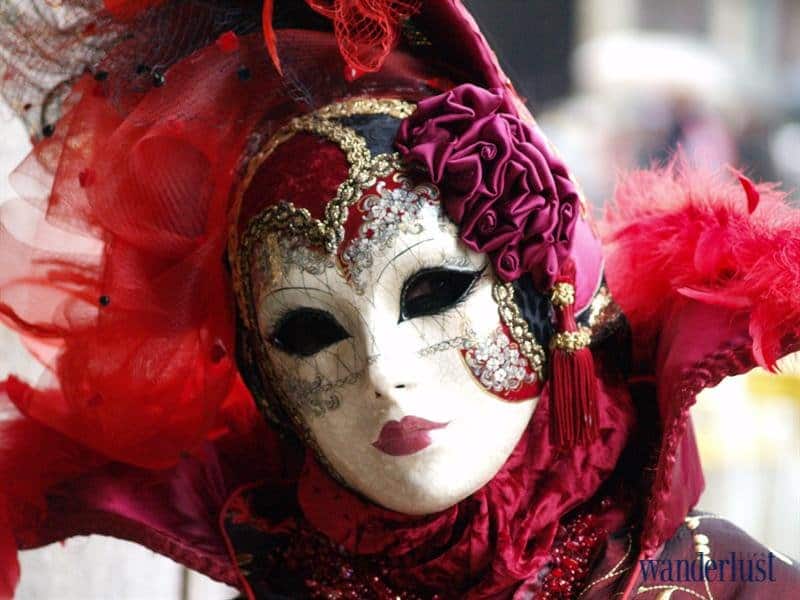 In 1980, the leader of the city decided to bring back the festival that had once been so popular.

The festival often starts with a parade of masks at San Marco Square featuring long-handled spear fighting on horses and musical performances. During this time, boats and gondolas turn even more magical thanks to the mask-wearing tourists along the Grand Canal.

Visitors are sure to be stunned by the colourful masks and costumes inspired by classical fashion trends complete with hats, overcoat and gowns from the 16th and17th century. This not only is high-class aestheticism, but also a reminder about the spectacular past of this boot shaped in particular and Europe in general during The Renaissance.

Though wearing masks, everyone has an individual face with different expression, thanks to artful hands of the craftsmen. Many of these faces are playfully distorted with long, pointed chins and without mouths. The traditional kind of mask most used in Venice is known as Bauta and usually comes with a three-cornered hat and a black overcoat. The origin of the name Bauta can be traced to the German word ‘behüten’, meaning to protect. The special shape of this mask transforms the voice of the wearer to protect their identification.

Beside Bauta, Voltos also known as Larva, meaning ghost in Latin, are another specific kind of mask in Venice. Shaped like the ghost of Volto the allow people to eat, drink and talk easily without taking off the masks. Voltos are so light that they makes people feel comfortable and are thus really suitable for dance parties or networking. Originally, Voltos were only white and used by men. As time passed Voltos became more magnificent and luxurious with decorative details of feathers and sealed with diamonds and gemstones to create an elegant appearance for their owner who would wear it with expensive clothes and precious jewellry and so it gradually become a mask favoured by women.

If Volto represented men, Moretas were used by women only. Moretas are oval masks made from black velvet covering the surrounding of eyes, nose and mouth. Moretas are also called dumb masks, as the women wearing them were unable to talk without biting a small bead inside the mask. Only when a girl wanted to respond or express her friendliness to a man who approached her, would she lose the mask. Therefore, Moretas stand for passionate beauty full of the mystery of women who take the initiative in selecting the person they want to talk to.

One more exceptional mask of Venice is the Medico Della Peste or plague doctor. This mask imitates the strange custom of doctors during the period of the plague from the 14th to the 17th century. A frightful pandemic that killed one-third of Venice’s population. Doctors would wear this mask and fill its beak with various aromas, as they believed the plague spread through diffusion in the air. 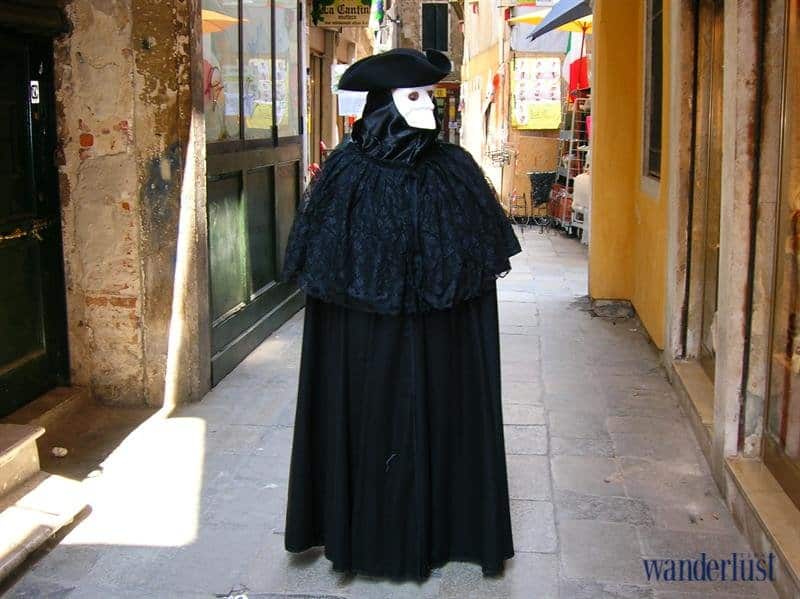 Beside these specific kinds of mask, Venice’s citizens also like wearing masks typical for actors of the Commedia dell’arte, a kind of traditional improvised drama performance in Italy during which the actors wear masks when performing on stage. One of the most famous masks from the Commedia dell’arte is the Colombina mask of a female servant that only covers half the face.

There is a legend that says the Colombina became popular as it was designed for an actress who did not want her beautiful face to be covered entirely. The half-covered design of the Colombina mask make female features more attractive and inspires artists with its abundance of styles. Colombinas made the world of masks much more diverse. It is the bikini of mask fashion.

An exciting atmosphere of music, dance, costumes and various kinds of mask turns Venice into a massive open-air stage during carnival. The most amazing feature is that almost all houses, streets and cultural structure of Venice are still preserved from hundreds of years ago and thus the festival offers tourists and citizens a fascinating party evoking a past full of passion and mysterious masks.