No landscape, no delicious cusine, and no leisure… The only thing that urges me to visit this place is the legends about the last generation of tattooed women here.

Deep in the remote mountainous region of the Chin State, Western Myanmar, there lives a tribe whose women are world-renowned for their distinctive facial tattoos. For the Chin people, the more face tattoos a woman has, the prettier and braver she is. This tradition of the Chin people began in the 11th century and was erased in the 1960s. The traces of this traditional practice will soon disappear as the last generation of tattooed Chin women fades into history. 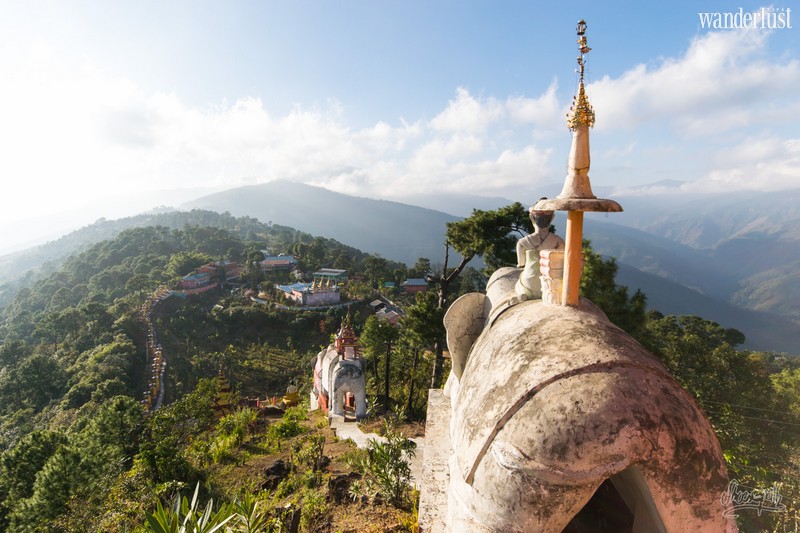 This journey is off-the-beaten-path for Vietnamese travellers, simply because I could not find all of the necessary information on Vietnamese websites. I had to find information by other foreign tourists who have visited this place.

I chose to visit Mindat Town, where Ms. Daw Yaw Shen Ying lived. She was considered a world wonder because she was the last Chin woman who knew how to play the bamboo flute by nose. This town is also home to diverse ethnicities. Mindat is home to three people: M’Kaan, M’uun, and Uppriu. Here, I could observe the face tattoos of the three different groups.

After studying the map carefully, I chose the route of Yangon to Bagan to Pakkoku to Mindat. I stayed in Bagan for three days to explore the beautiful, mysterious city, before I embarked on a treacherous journey, with less than ideal conditions. The road from Pakkoku to Mindat was a rocky, dusty mountain pass, in a poor-quality car. There were times on the road when I felt I was literally covered in dust. It was so dusty that my red coat was covered with a layer of grey afterwards. The journey from Bagan to Mindat was about 230 kilometres, which took about 8 to 10 hours, and cost around 450,000 VND.

Mindat is a small town located in a remote, mountainous region with poor electricity coverage. At around 7pm or 8pm, darkness would cover the entire town, with only a few flickering lights shining through the bamboo houses. The temperature difference between day and night was significantly different; the day was hot and sunny, and the night was extremely cold. It might have been due to the long ride, but my body was not used to the sudden temperature change. I became fatigued, shivering in the cold. 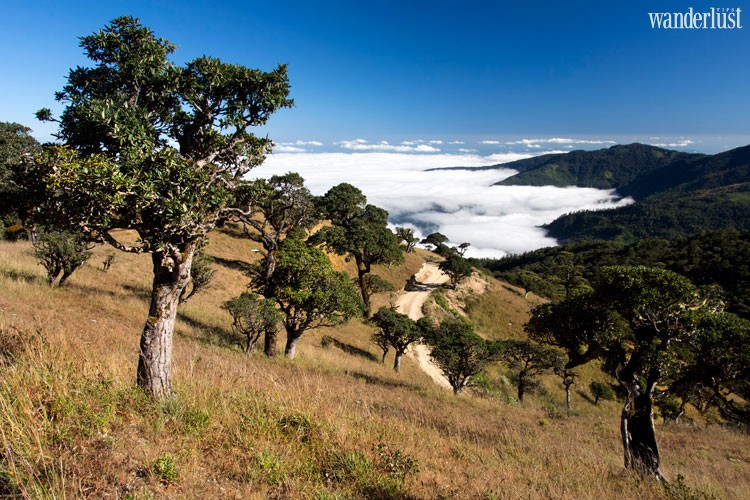 I encountered an unexpected problem. In Bagan, I contacted an agency to hire a tour guide in Mindat, who would help me visit the Chin women in the village. Everything was final, but the guide did not show up the next day and did not send a message. I waited for half a day, and asked the homestay owner to get me another guide. I received the bad news that “All of the guides in the area are with tour groups climbing Victoria Mountain. They will return in two days.”

I remembered the reviews I read on the blog of Western backpackers who have been here: “Don’t think you will be welcomed here without a local guide,” “Nobody here speaks English, so without a local guide you will not be able to communicate with them.” I was upset, discouraged, confused, and disappointed. But I told myself, “I’m already here, I cannot give up now.” I took a deep breath, filled my backpack with snacks, and travelled into town alone to start exploring. 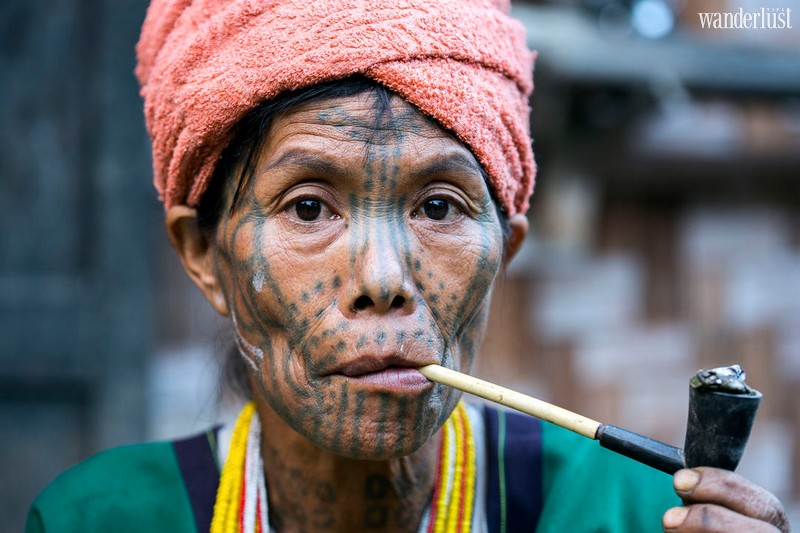 At the time, I had thousands of questions: “How do I find the Chin women?”; “How do I know which house to visit?”; “How do I get them to welcome me?” But before I could panic, I started to see the Chin women with tattooed faces. They appeared before my eyes, going about their casual daily lives. An Uppriu woman, whose face was covered with tattooed dots, sat in front of her house and cleaned her traditional jewellery with her mouth. Two M’Kaan women with interconnecting D-shaped tattoos on their cheeks sat in front of a house, chatting.

Meeting each woman, I quickly grabbed some candy from my bag, bowed to them, greeted them with a common greeting, and gave them the candy. The Chin women seemed happy with the gesture, and they smiled at me, tugged on my arms, and said something I guess was “thank you.” That’s how I started to learn about them, by politely greeting them, offering a small gift, and finding ways to interact more with them and observing them. It was probably my friendly smile, my curiosity, and my bewilderment that charmed them. That was how my first day started, by observing with my eyes and my heart. 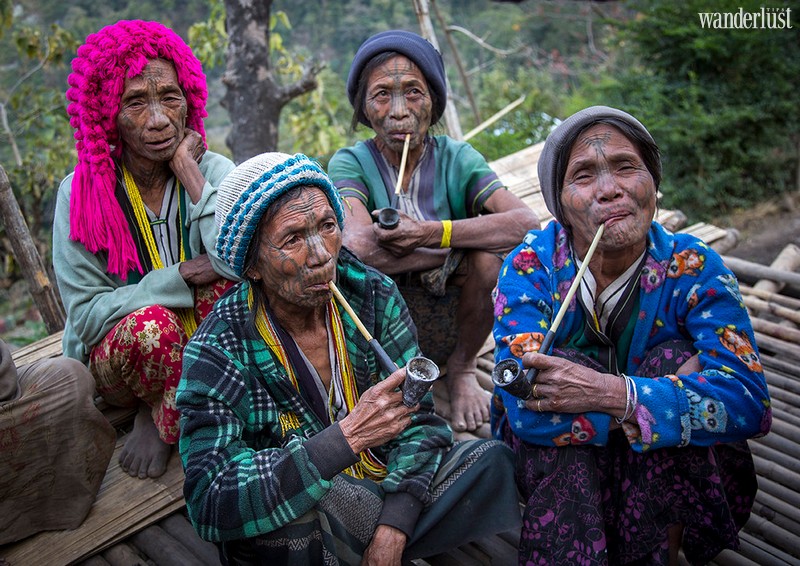 My last stop in the journey was to visit Ms. Daw Yaw Shen Yin (90, M’kaan), the last woman in the world who knew how to play the bamboo flute with her nose. Thanks to this, she became the symbol of tattooed Chin women and was dubbed a heritage of the world.

I always felt that each journey was a wonderful moment in my life that allowed me to meet the legends I had seen only on TV or my computer screen.

After several failed attempts, the flute started to sing. Miraculously, the sound was emanating from the nose of the 90-year-old woman. I pressed the button on my camera to record, quickly snapped a few photos, and then faded into silence to take in the sounds. I couldn’t remember how many times I had seen her photos on international media and wished I could meet her at least once, just to sit and listen to her play the flute.

Her son-in-law shared that she had been unable to walk for two years now, and it was difficult for her to conjure the breath to play the flute. However, one habit never changed – every time she started to play the flute, she had to wear her prettiest outfit and jewellery. It was a joy for her to wear the jewellery she had her whole life, and play for visitors. She loved them and was sad that nobody made this kind of jewellery anymore. 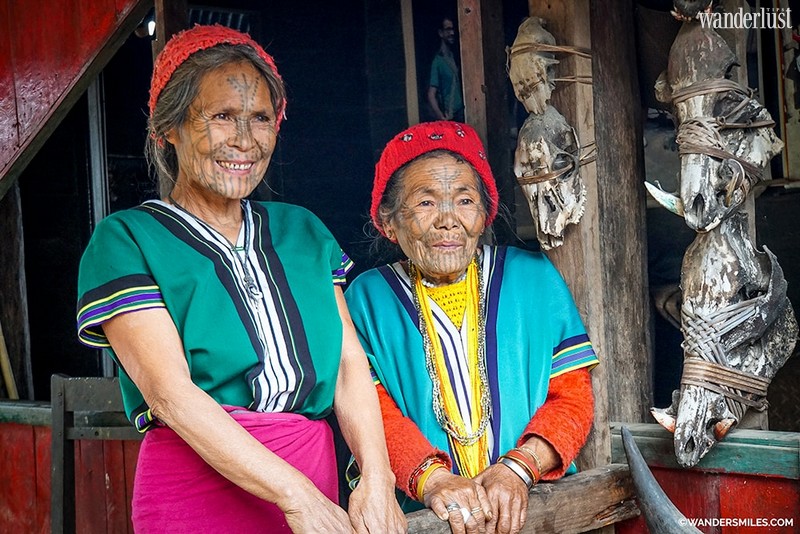 I found myself to be very lucky then, because this was possibly my only chance to ever meet this heritage of the world, or hear her play the flute. It was a happy coincidence that I met Ms. Yaw Shen’s son-in-law, who spoke English well. He took me around to visit the last generation of the tattooed women and told me stories about them.

He shared that this tradition originated from an old tale. A cruel king used to kidnap Chin girls in the village to become his slaves and concubines. Chin families had to tattoo their daughters’ faces to prevent them from being kidnapped. “Over the years,” he told me,” tattooing on women’s faces became a tradition, a part of our culture. The tattoos on women’s faces became a beauty standard in everyone’s mind. We used to think that the more tattoos a girl has, the more beautiful and braver she is.”