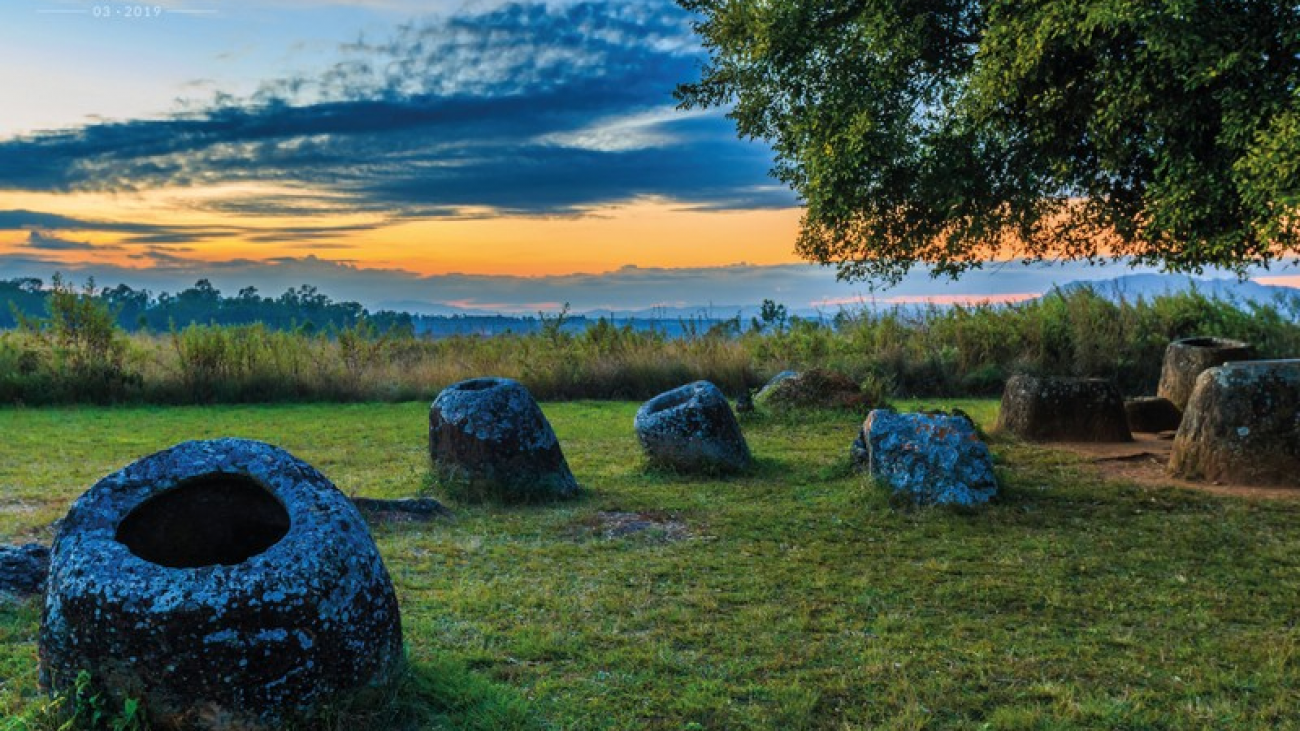 The Plain of Jars – located on the Xieng Khouang Plateau of Laos, about 400 kilometres from the capital Vientiane – still remains an enigma to archaeologists and a mysterious and fascinating destination for tourists.

The Plain of Jars has nearly 2000 stone jars scattered over an area of 25 hectares, and there is only a single stone jar that has remained entirely intact. According to the estimates of archaeologists, they date back 1500 to 2000 years.

At the three sites which are open to the public, there are hundreds of jars from one to several metres in height, and weighing from a few hundred kilograms to a ton. Each jar has a different shape and angle, but all are chiselled monoliths of mostly granite or sandstone. The jars have very thick walls, are large in diameter, and their mouths are round or oval. The bodies of the jars are quite smooth, and many of them have elegant shapes curving from the bottom to the mouth, looking as beautiful as jars made of china or porcelain. The insides of the jars are polished while the outsides may have had carved figures adorning them, but these have been worn away by the weather of thousands of years. Currently, only a few blurry carved figures remain, engraved deeply into the stone.

Looking at the stone jars, it seems like we are seeing the testimony of the miracle of a mythical region. Countless questions are raised in the moment of wistfulness at the border of the present and the past. During those ancient times, who could have moved thousands of stones weighing thousands of tons when the nearest stone mountains were kilometres away from the Plain of Jars. What kinds of tools did they use and how many years did it take to chisel out and create such a giant Plain of Jars? And what was the purpose of making these enormous stone creations? Of course, there are also many theories to satisfy the curiosity of visitors.

In the 1930s, a French archaeologist, Madeleine Colani, of the French School of the Far East carried out excavations in the area of the Plain of Jars and discovered many traces of human remains in a nearby cave along with fragments of bones and teeth (mostly juveniles) cremated in a number of jars. From this, Madeleine Colani hypothesised that the area of the Jars had been used as a burial site with the ancient people of the area using the stone jars to store people’s remains and also to store food. In 1994, a Japanese archaeologist, Eiji Nitta, excavated six pits around several large stone jars and found human bones in all six. However, only one jar contained cremated bones and teeth, while the others contained no signs of this at all. Because of this, he thought that the stone jars may have been used to house burial items. Although archaeological results offer some suggestions, they are only hypothetical speculation, not a strong and convincing scientifically-based answer.

I am not convinced by the archaeologists’ hypotheses. Archaeological results also show that many human bones were buried in a nearby cave and underground, while on the plain with thousands of jars, there are only a few containing the charred remains of bones and teeth. To chisel out stone jars like these requires a tremendous amount of time and effort (scientists estimate from ten years to hundreds of years), so they should have been used for some other purpose rather than just for the ritual storing of remains. As the idea of the jars containing the remains of the dead is not particularly convincing, the hypothesis of chiselling out the stone to carry gifts for the afterlife is even less so to me.

I prefer the legend of the origins of the Plain of Jars as told by the local people. It is said that this was the living place of giants and they crafted the stone jars to store water or to brew and keep rice wine. Perhaps they were a generation of people blessed with an enormous physique and extraordinary power, living at the same time as those who built the walls of the Imperial City in Tibet (according to Mundasep’s theory) (1). They chose this vast field to be their residence, and they carried from the mountains far away a thousand giant blocks of stone to create the Plain of Jars. Each jar is a testimony to the strength, skill and extraordinary diligence of those people. I like to look at those jars imagining that once they used to be storing wine or water, reflecting the faces of the pure and innocent people living in ancient times under a clear sky amidst the vast green plains.

When I sat inside a stone jar, looking up at the distant sky, I felt an invisible yet magical connection between the past and the present, between legend and everyday life. Walking through the Plain of Jars, I seemed to be able to travel back in time: present turned into history – history into fairytale – and fairytale turned into legend.

* Note (1): Erono Mundasep is an ophthalmologist, doctor of medicine and former director of the Russian Eye and Plastic Surgery Center. He is the author of well-known books including Where do we come from, Tragic message of the ancients and In the arms of Sambala.

The Plain of Jars is a historic cultural area near the commune of Phonsavan, in Xieng Khouang province, Laos. To get there, most tourists choose to travel by car or plane.

>> From Hanoi, you can take a car to Laos along National Highway No.7 to Nam Can border crossing (Nghe An), passing through immigration into Laos. On the way, there are many places along the way with breathtaking views of the mountains and forests.

You can rent a tuk-tuk to take a trip to visit the Plain of Jars or contact a travel agent to hire a tour guide for more detailed information during your visit.

The dishes you should try in Phonsavan are Laotian sticky rice and Tam Maak Hung.

Indigenous crafts made from wood and silk or embroidery works are the most sought after items.