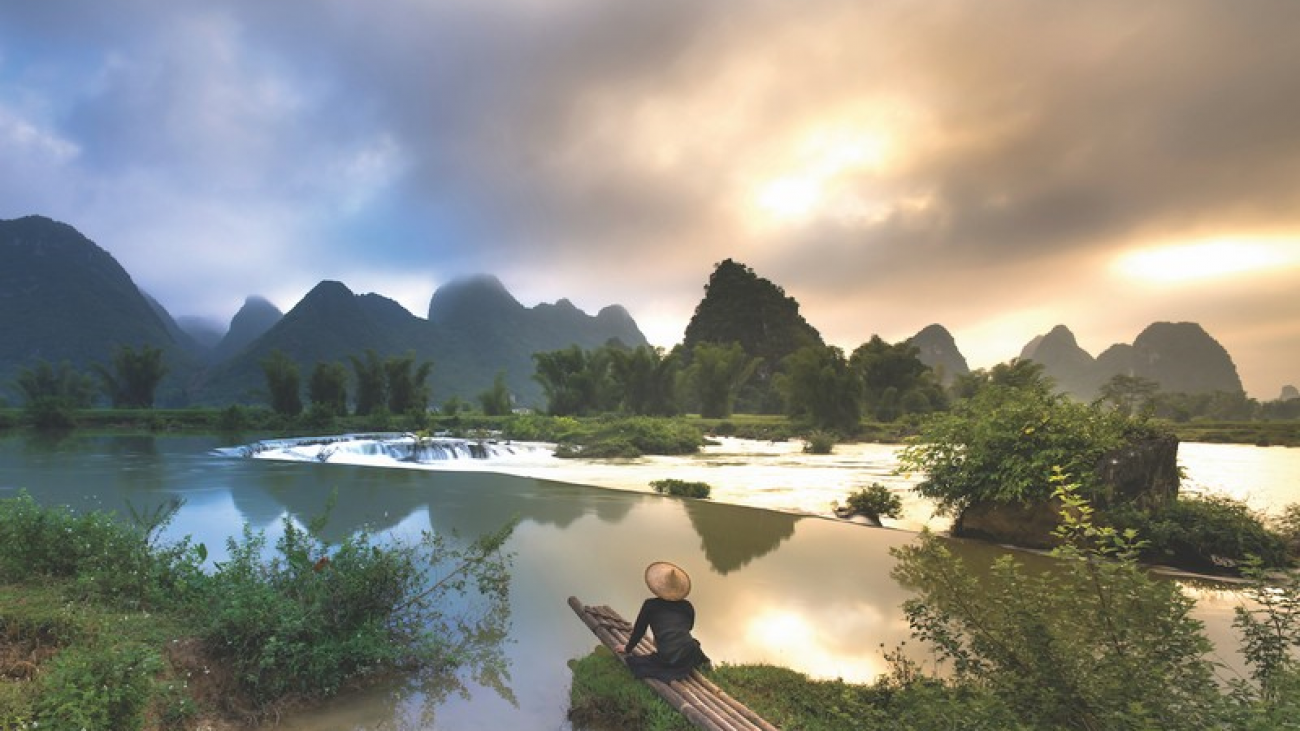 A pristine, mysterious and poetic land, Cao Bang evokes in people’s hearts a sense of contemplation and admiration with its magnificent scenery and clear blue sky. 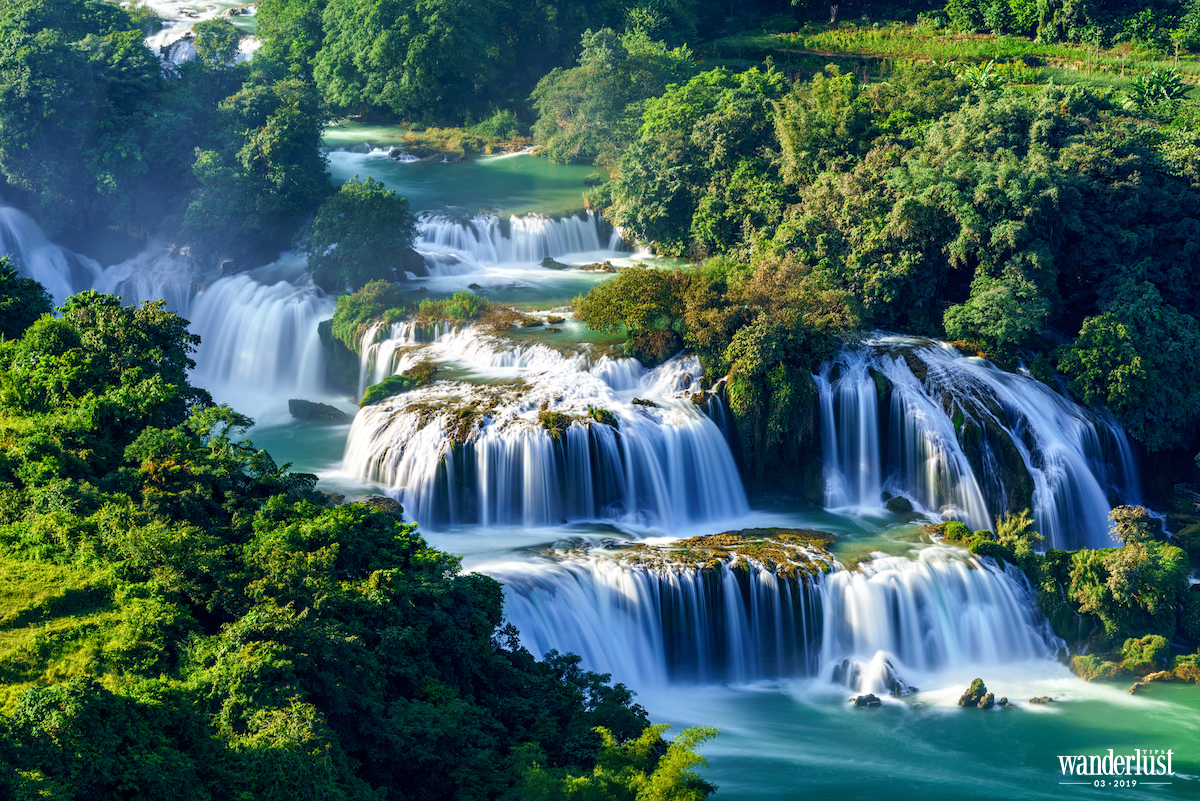 Cao Bang people have a wonderfully beautiful song about their homeland:

If you pound the three-month rice

I will carry the water taken from Cao Bang to you

As soaking rice in this water will it whiten

I wonder if we can get to know each other better

I used to wonder why the man in the song only wanted to bring water from Cao Bang but not any other kind of water for the girl he loves. When I visited Cao Bang, I finally got my answer. Cao Bang’s water is clear, as green as jade and sparkling fresh just like the souls of the local people here.

On 12th April 2018, a resolution was adopted to officially recognise Non Nuoc Cao Bang Geopark as a UNESCO Global Geopark. We decided to take a journey to discover the famous landscapes of this large park, to understand and in the end to fall in love with the breath-taking scenery of Cao Bang.

From Ha Giang, I made my way to Cao Bang on a sunny afternoon. If Ha Giang stands out for its majestic mountains, Cao Bang’s nature is blessed with pristine and spectacular primitive forests. The Quay Son river is so crystal clear that pebble stones are visible on its riverbed and spreading out in front of my eyes were vast bamboo forests with slender stems rising straight into the sky. On the side of the mountains, bunches of pink forest flowers were blooming, the air and breeze filled with their sweet fragrance. As the winds passed through the mountains, the sides of the road were full of reeds fluttering in the wind. All of the scenery was vividly bright and colourful, yet still so peaceful and contemplative. Cao Bang’s nature kept sinking deeper into my heart, simple yet so familiar like it had been part of me for such a long time.

BAN GIOC WATERFALL – A GREEN PEARL ON THE COUNTRY’S BORDER 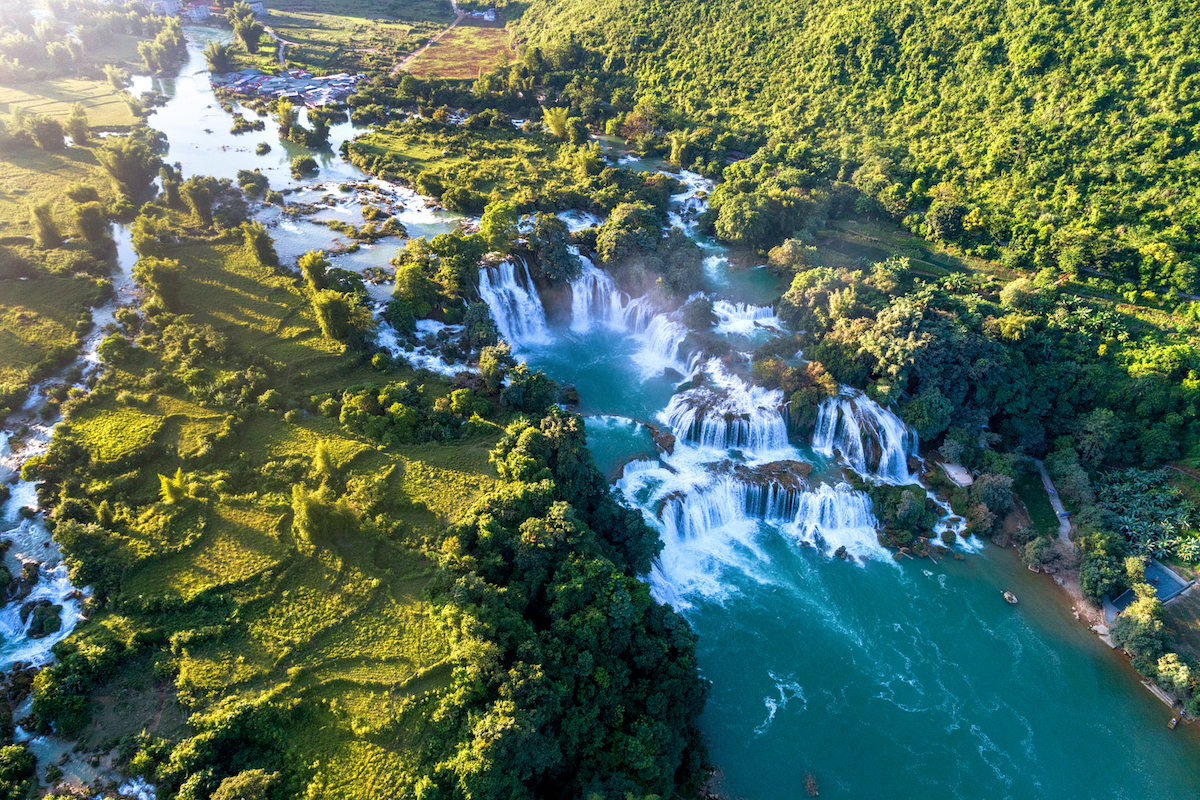 The first place I visited on the journey was Ban Gioc waterfall – the largest natural waterfall in Southeast Asia, originating from the Quay Son river which lies on the border of Vietnam and China. The falls are formed in two parts, the smaller waterfall in the south is called Cao waterfall, while Thap waterfalls are the main falls in the North on the VietnamChina border. According to the land border treaty between Vietnam and China signed in 1999, the smaller falls belong entirely to the Vietnamese, while the main waterfall is shared, delineated by boundary marker No. 836.

I had travelled hundreds of kilometres to get there and although the journey was quite arduous, when I arrived, the beauty of the waterfalls made the fatigue seem to disappear. Standing high above, watching the waterfall cascading down, my heart was full of a joy difficult to put into words.

The beauty of Ban Gioc waterfall was as splendid as a green pearl in the border area. It is a perfect combination of the mountains and the river perched among the most spectacular natural colours: the blue of the sky and the green of the mountains and forests, the azure of the water reflecting the colour of the sky. After flowing through the primaeval forests, when the water reaches here, it is at its freshest and most invigorating.

Visiting Ban Gioc in the dry season, the volume of the water flowing over the falls is less than that of the rainy season, but  the beauty of the waterfalls still overwhelms me. From high above, thunderous flows of water crash down, creating white foam. At the smaller falls, the water flows from a height of 30 metres offering a spectacular and awe-inspiring scene, while at the main waterfall, the water flows more smoothly and gently like soft white silk strips.

I was desperate to walk along the meandering path next to the waterfall and climb the top of the falls. It was definitely worth the effort as I could admire a panoramic view of the sky, land and forest, which was so wonderful that I wished to embrace it all in my arms. The surface of the river past the waterfalls is as calm and clear as a mirror, and on each side, there are green fields of grass with buffalo grazing leisurely. I stood there for a long time, watching this amazing scene and feeling a pleasant sense of happiness. 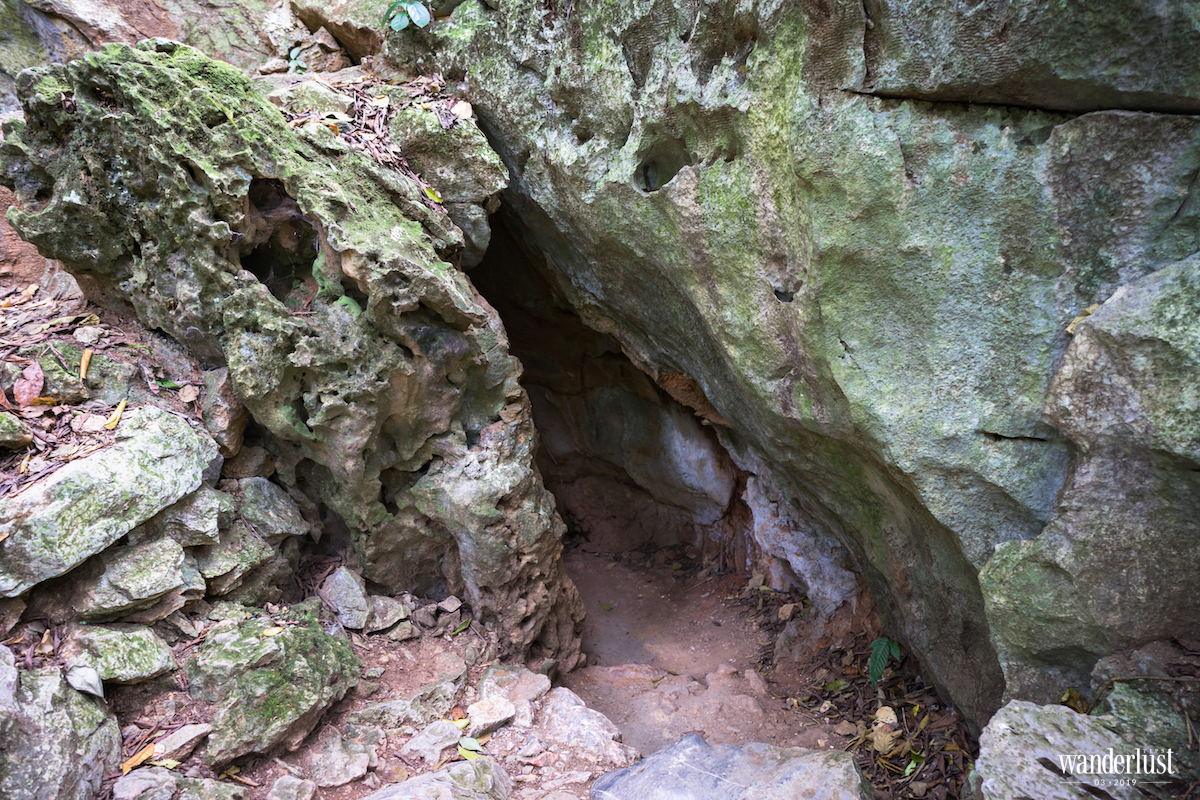 The next day of the journey, our group visited Pac Bo Historical Site (Ha Quang), where our beloved President Ho Chi Minh used to live and work. It was here he wrote the history of the Communist Party of Vietnam, living the hard life of a revolutionary soldier, but always believing in the future.

Our visit to Pac Bo was more than worthwhile as its nature is so beautiful and poetic. Lenin stream is clear and gentle with schools of fish swimming around, and Karl Marx Mountain appeared so majestic and solemn in the sunshine with peaceful villages nestled at its foot. Pac Bo Cave is well-known yet humble, marked by the time President Ho Chi Minh lived and worked here. He was modest and transparent with a gentle soul. I suddenly felt my heart soften, my soul was clearer, and all my worries disappeared; to be immersed in nature, to live like a mountain, like a river, like a tree.

Nature was generously bestowed upon Cao Bang in general and Pac Bo in particular as a pristine, natural beauty that anyone who comes here cannot help but be surprised by. These famous sites lauded in poetry and songs appear beautiful and lively. 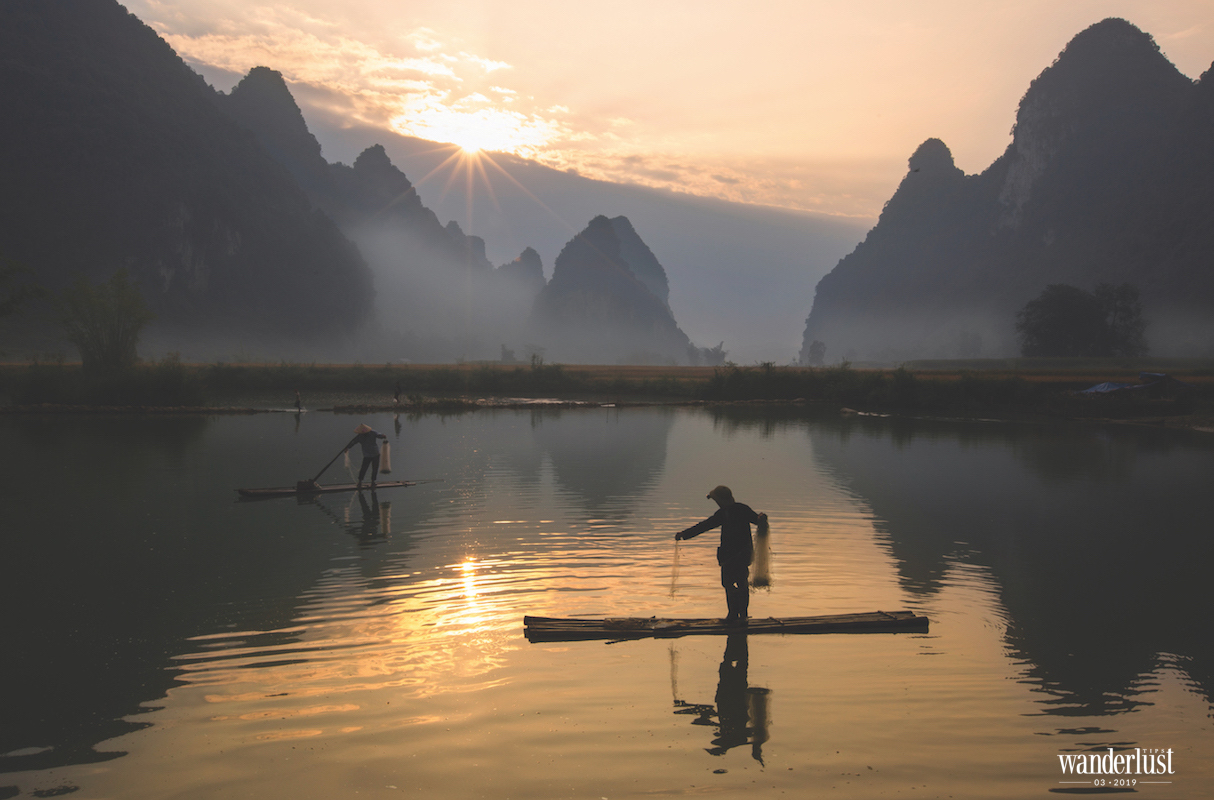 In the journey to explore the beauty of Cao Bang, Thang Hen lake is a must-see destination. Thang Hen Lake is the most beautiful of 36 lakes in the mountainous area of Tra Linh district, famous for its serene beauty of majestic mountains and peaceful, pristine waters.

Thang Hen lake is also known as “bee’s tail Lake” because if you are looking from above, the lake is shaped like the tail of a bee. Arriving in Thang Hen right at harvest season, I silently watched the yellow rice fields which looked beautifully like a giant woven carpet of nature and smelled of the sweet and pure scent of rice.

Thang Hen has charming scenery with trees stretching along the high and dangerous cliffs, reflecting off the green water, and growing along the valley of rugged rocks. Along with enjoying the poetic scenery of the river and forest, I rowed from one lake to another, enjoying dishes imbued with national identity and tasting the aromatic, delicious wine distilled with corn and yeast according to the traditional methods of the Tay people.

Not only attracting tourists with its incredible scenery, Thang Hen lake is also the source of many mystical tales. Legend has it that in the past, there was a young man from Cao Bang named Sung who was smart and handsome. He passed an exam and was rewarded by the king who gave him 7 days to return to his hometown where he was appointed as a court official. Back home, he married a beautiful girl named Ooc and being so besotted by his beloved wife, Sung forgot about returning to the capital until the sixth night came, when upon remembering he hastily said goodbye to his wife and parents and ran to the capital. In the middle of the night in the forest, after running 36 steps, unfortunately, he slipped, hit his head on the side of the mountain and died. His 36 steps today are the 36 large and small lakes of various names in Tra Linh District, and it is said that the place where he laid down is Thang Hen lake today.

Along with the journey of discovery, do not miss the opportunity to immerse yourself in the life of the local people. Cao Bang people are remarkably friendly and rustic who are simple, natural and hospitable. I was invited to enjoy some Syzygium tea – a very sweet tea prepared by the people here. I could feel in their eyes the hidden desire to conquer the heights of the mountains.

Saying goodbye to Cao Bang, my heart was filled with sorrow. Right from the first moment I came here, I knew that I would come back to once again listen to the wind singing the songs of the deep old forests, and to be immersed in the passionate love and the beautiful scenery of Cao Bang:

I listen to the wind singing by my side

When I leave, will you forget me

Please send some sunshine to me again …

(from the song “listening to the wind” by Anh Minh) 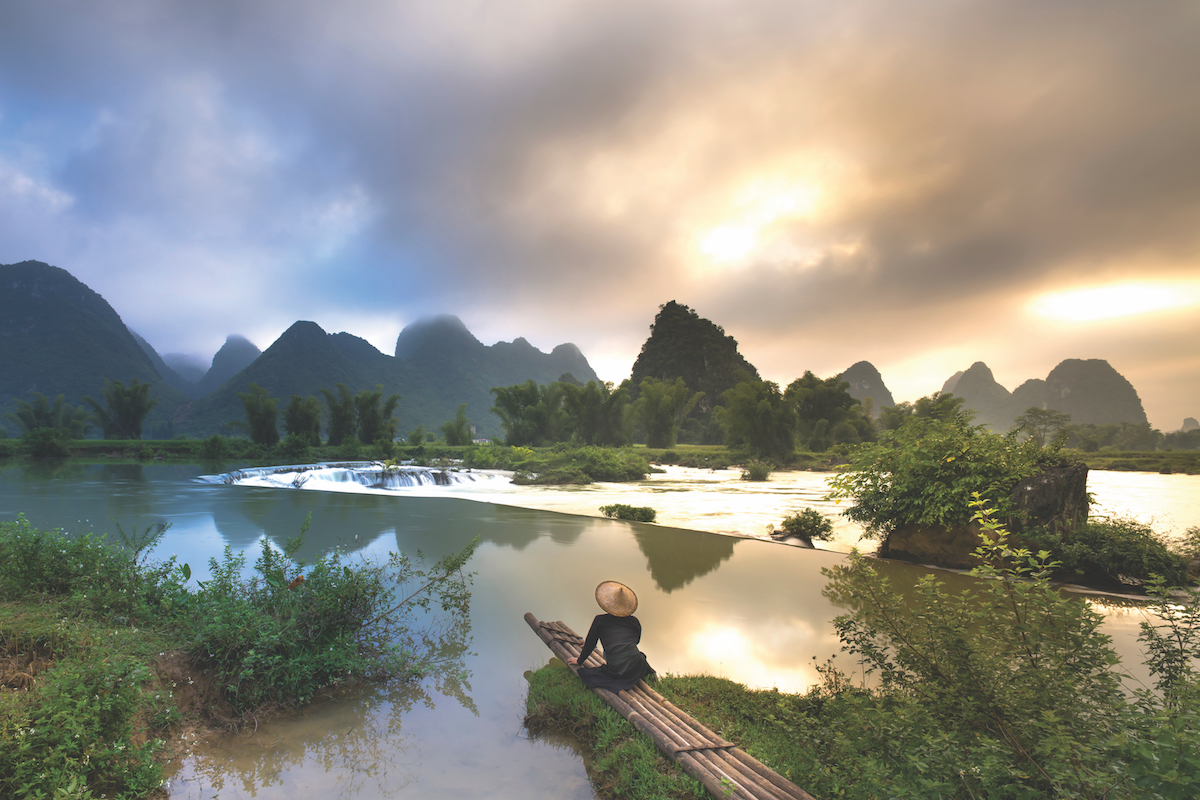 Cao Bang’s climate is characterised by two distinct seasons: the rainy season lasting from April to September and the dry season from October to March:

>> If you want to visit Ban Gioc waterfall, you should go in August and September. At this time, the many waterfalls will be flowing very beautifully.

>> If you like ice and snow, you should visit in winter (from November to February). During this period, in the forest of Phia Oac temperatures drop very low, making snow very likely to happen.

From Hanoi, you can take a motorbike or bus to Cao Bang. Passenger ticket prices range from VND170,000-200,000. If travelling by motorbike, it is important to note that the roads to Cao Bang are mainly through steep mountains with heavy traffic, so you have to ride carefully, bring your license and registration, wear protective clothing and safety helmets, and abide by traffic laws. Besides this, you should also carry petrol and a repair tool kit.

Dishes that cannot be missed include Cao Bang hot roll cakes, ant egg cakes, dishes made from bees, roasted duck and sausages as well as dishes made from wild vegetables including Da Hien vegetables, stone moss, forest banana and Bauhinia variegata. Also, Trung Khanh chestnuts are also very delicious, and you can buy them as gifts for your family.

OTHER POINTS TO NOTE:

>> It is recommended to bring any medicine, sunscreen, insect repellent and personal items that may be required while you are travelling.

>> Wear lightweight, well-ventilated and absorbent clothes. It is recommended to wear water-resistant sports shoes as well as elbow and knee protectors.