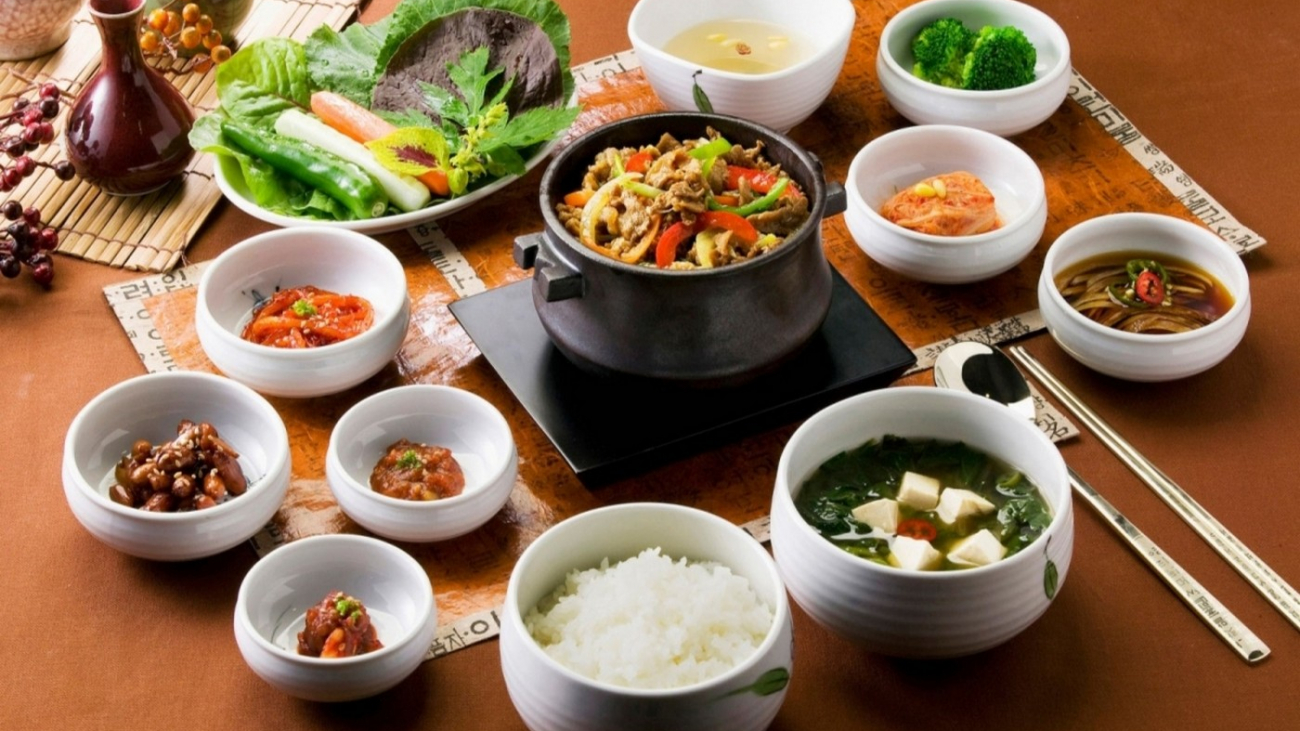 The fact that there are 40 different types of kimchi should tell you something about Korean cuisine. As time changes, and Korean’s culture, has evolved greatly. Nevertheless, tradition cuisine, with a touch of other cuisines, plays an integral role in the national identity. There is no way to address every dishes, and certainly, this is cannot be exhaustive, but a list of some of the most served Korean dishes in Korea and worldwide.

Korean cuisine originates from agricultural and nomadic traditions in Southern Manchuria, when people in the region migrated down the peninsula and assimilated with the local people. The cuisine based largely on rice, vegetables and seafood. Traditional Korean dishes are served with banchan (side dishes), with steam-cooked rice. Kimchi, a fermented vegetable dish, is served on every meals. Here are the list of Korean dishes you should try.

Nothing spells Korean culture better than kimchi. A staple food, eaten in every meals, kimchi is basically fermented napa cabbage and Korean radish, seasoned by salt, Korean chilly powder, spring onions, garlic and other seasonings depend on the region. 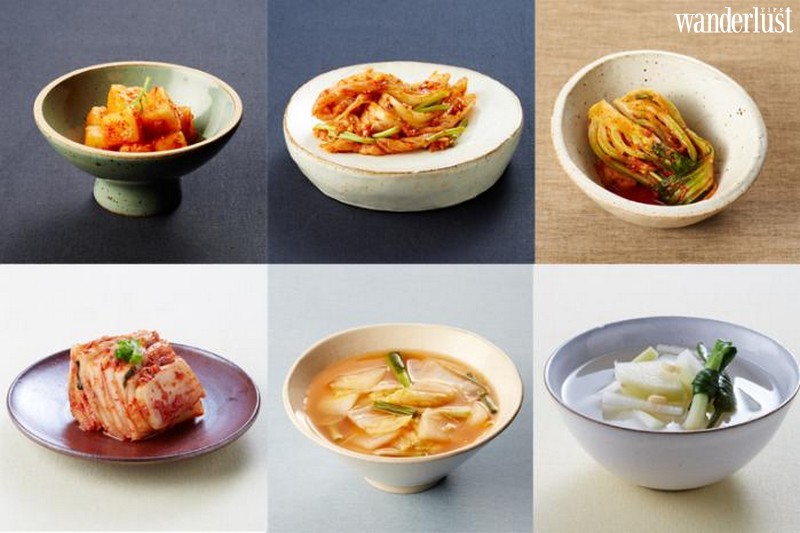 As it is regionally based, there are over 180 varieties of kimchi recognised, with many more circulating in rural areas in both North and South Korea. Spicy, not spicy, watery, not watery, even not made from napa cabbage, nevertheless, they all share the same highly nutritious and flavourful characteristics, as well as being a quintessential of every Korean meals.

As well-known as kimchi is, few knows that kimchi is so versatile that kimchi-derived dishes were designated a category of their own. And the most famous among them is kimchi-jiggae (kimchi stew). To make this dish, kimchi is finely chopped, sauteed in oil, and cooked with tofu and meat such as seafood, pork or beef, but most commonly known is with pork. And, interesting fact is, this dish will still be served with uncooked kimchi as a side dish. 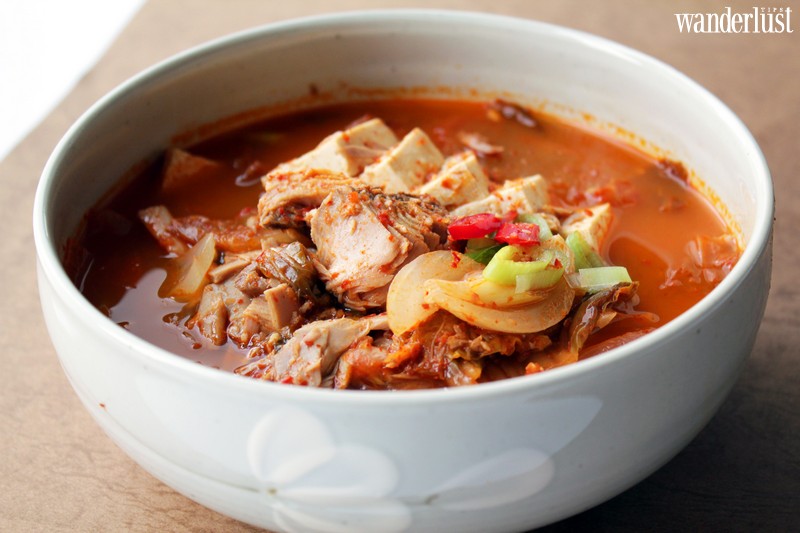 Bibimbap is a meal-in-a-bowl mixed together, consists of rice, mixed vegetables, beef, egg, sesame oil and chilli paste or soy sauce (or both!) to taste, and mixed well. Interesting enough, bibimbap was once served to Korean kings as lunch; and ordinary Korean back in the day would eat the dish before new year, as a way to rid of all leftovers. The dish is highly customisable, and nowadays, it is a cheap and quickly made dish that appear everywhere.

A dish made of dried seaweed rolled up with steamed rice, vegetables such as radish, fish or meat into cylindrical shape, then served by cutting in small, bite-size pieces. The origin of this dish is debatable, but the dish is now a distinct dish of Korea. Gimbab is a highly customisable dish, but must have gim (dried seaweed wrapping) and bab (rice). The filling can be tuna, beef, pork, or only vegetables, or even only rice wrapped in seaweed Chungmu-gimbap. 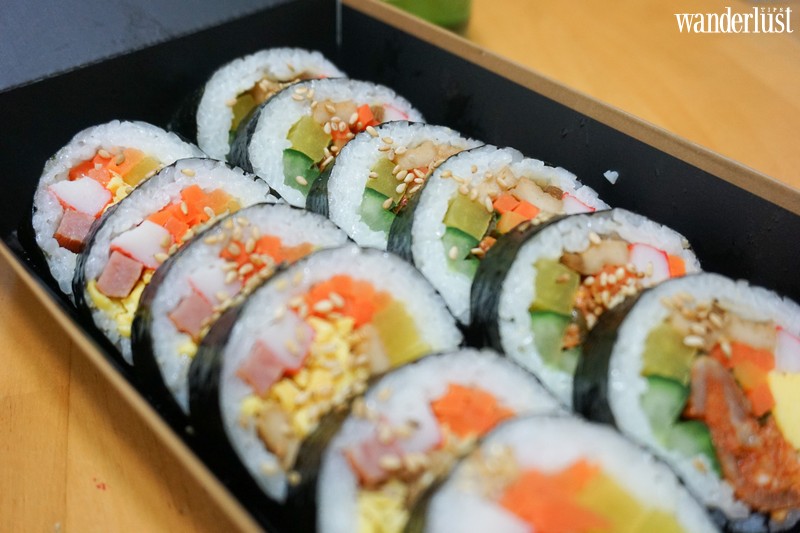 A type of rice cake made from small-sized Garaetteok, a long, cylindrical rice cake. Tteokbokki is commonly served with eomuk (Korean fish cakes), boiled eggs and scallions, all together in a thick, hot and spicy chilli paste sauce, or non-spicy soy sauce. 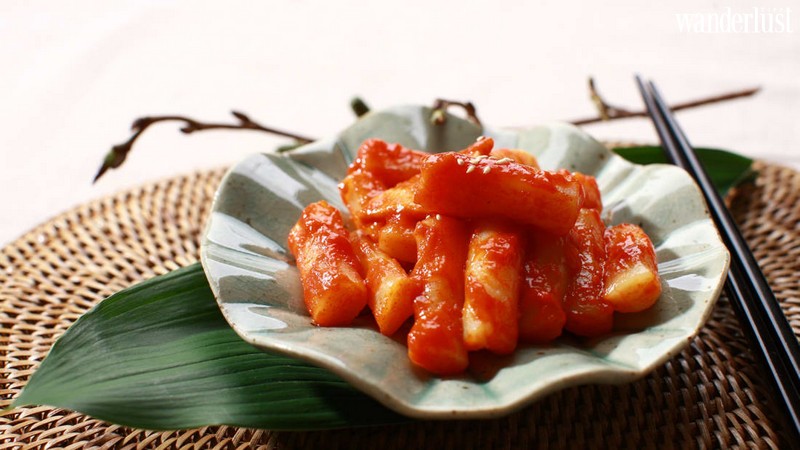 Literally translated to “noodles mixed with vegetables”, japchae is stir-fried glass noodles with carrots, spinach, cabbage,…any sort of vegetables. What is iconic about japchae is dangmyeon, a transparent noodles made from starch of sweet potatoes. Once a royal dish, jabchae is commonly served on special occasions, such as weddings and birthdays. It is served mostly as a banchan (side dish), but sometimes it can standalone as a main dish. 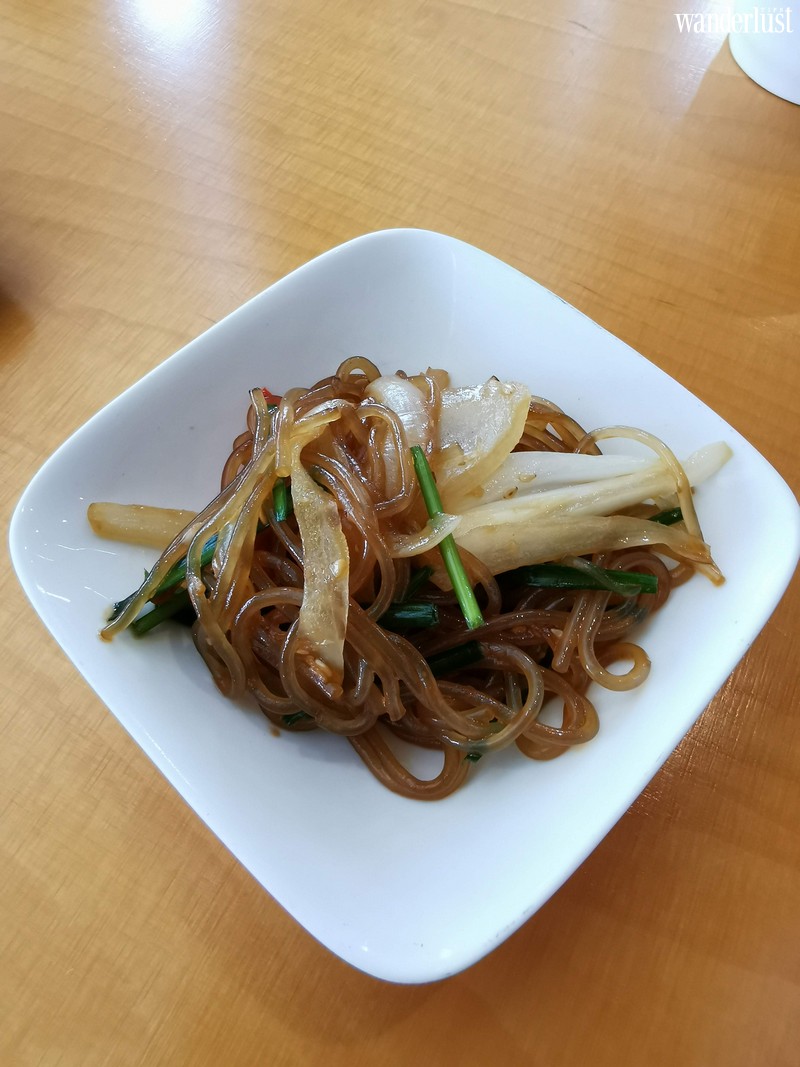 Naengmyeon is translated to cold noodles, originated from Joseon era. There are two distinct variants, mul naengmyeon and bibim naengmyeon. The former is more commonly known, and is served cold in broth; the latter is served with a spicy chilli paste dressing and eaten mixed. Originally a Northern delicacy, the dish is now widely enjoyed throughout the peninsula. The cold, refreshing taste of mul naengmyeon, served with cucumber, pickled radish, and half a boiled egg on top makes us think that this is a summer dish, but actually it was made to serve in winter.

Most of us must have been to a Korean grill restaurant once. The server would bring a slab of pork, unmarinated, unsalted, and start grilling it. The sizzling sound of the meat being cooked and the smell would definitely beg its eater to dig in, and to order another piece. It is served with lettuce, perilla leaves, sliced onions and raw garlic kimchi to make a type of wrap. 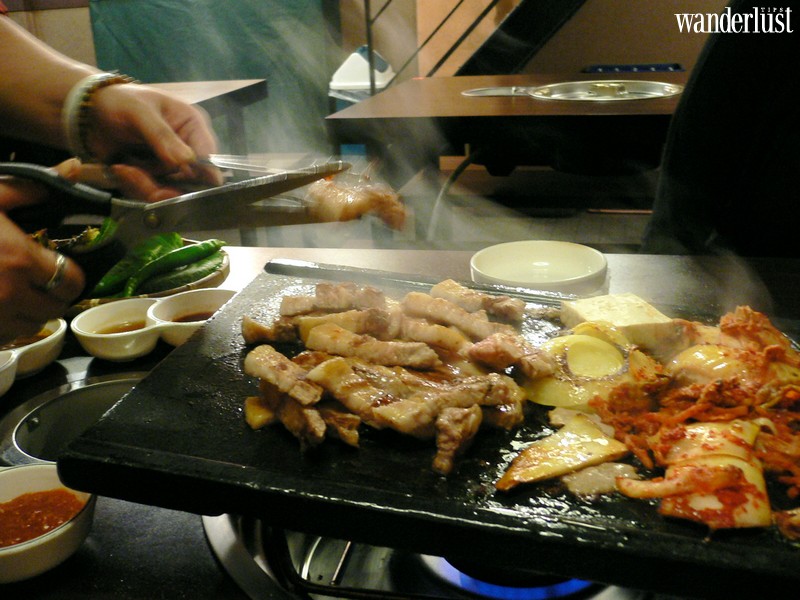 Should not be mistaken due to the familiar possible acronym, the dish was created in South Korea as a fusion dish, it is commonly considered a street food and eaten as snack. Korean fried chicken is unique due to its use of sweet chilli sauce and soy sauce. It is commonly eaten while drinking beer and considered an anju (food serves with drinks). 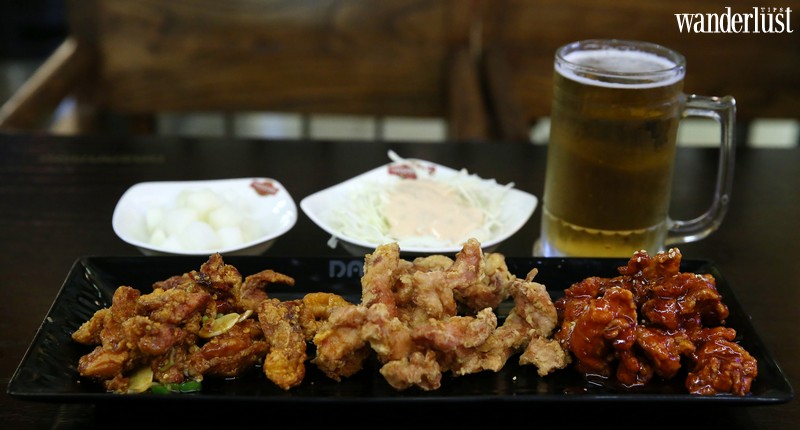 A dish famously associated with Lotteria, a South Korean fast-food chain, as bulogi flavoured burgers are part of its menu, it is originally made of thin slices of beef or pork, marinated in soy sauce, sugar, sesame oil, garlic and ground black pepper. At home, it can be stir-fried, but it is commonly seen in restaurants, cooked at the table on a barbeque. 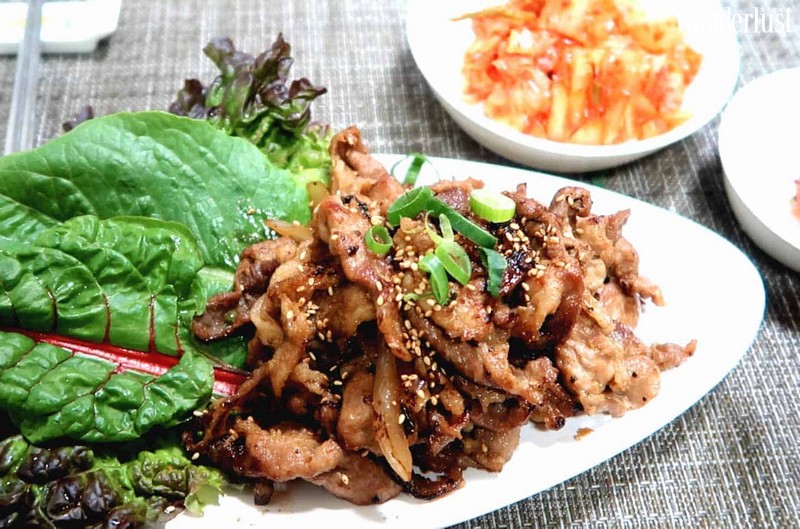