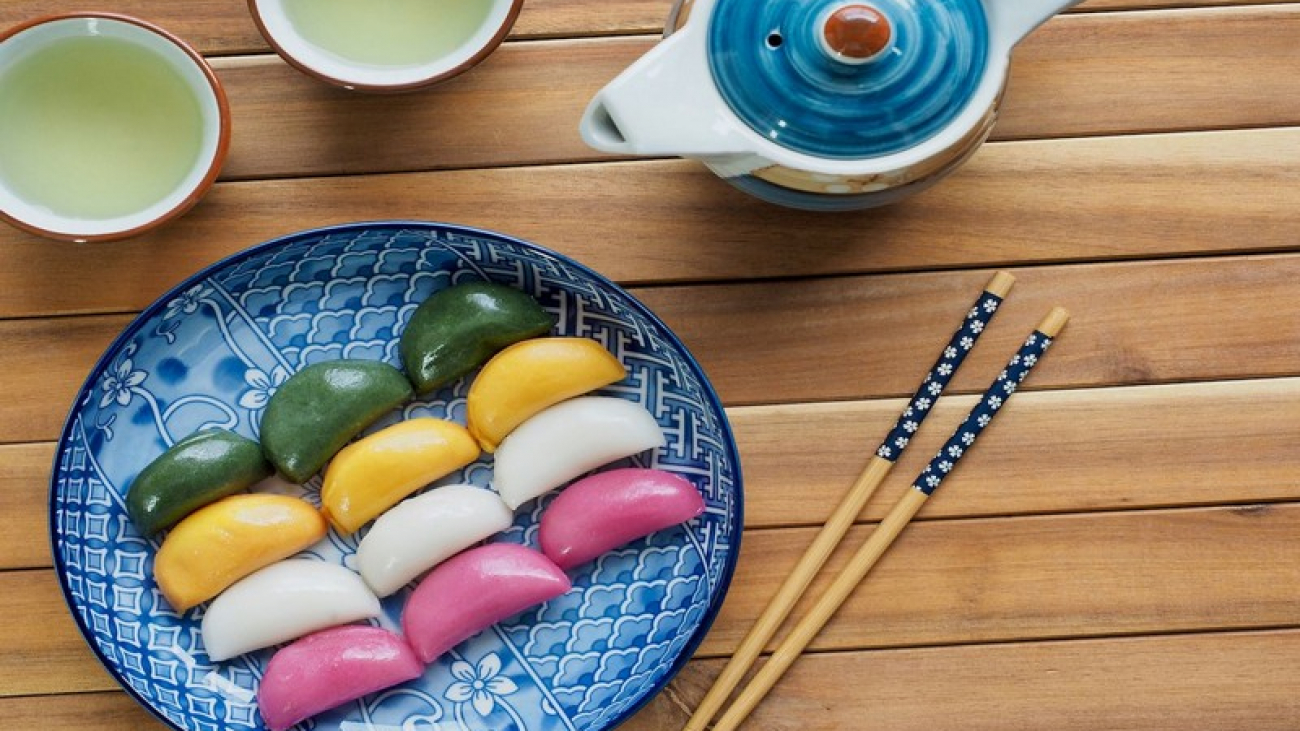 Known as one of the healthiest cuisines in the world, Korean food intrigues many foodies from around the world with its exquisite flavours and unique decorations. Whether you want something to warm you up through a harsh winter or cool you down in a blisteringly hot summer, these 7 colourful Korean dessert options can fulfill any craving.

Songpyeon is traditionally served during the Korean celebration of Chuseok (an autumn harvest festival). These small half-moon shaped rice cakes are stuffed with sweet fillings such as sesame seeds, beans, red beans, chestnuts and many other nutritious ingredients. When steaming the Songpyeon, this Korean dessert is layered with pine needles to add the delightful fragrance of pine. Songpyeon gets their name from the pine needles because ‘song’ in ‘Songpyeon’ means pine tree, Korean elders say that a person who makes beautifully-shaped songpyeon will meet a good spouse or give birth to a pretty baby.

CHAPSSALTTEOK – A FLAVOURFUL TREAT FOR YOUR TASTEBUDS

Chapssaltteok is a popular Korean dessert, particularly during winter months. It is a rice cake made with glutinous rice and is similar to Japanese mochi – Daifuku. This delicious snack symbolises good luck, so it is often given to people taking the university entrance exam to sweeten up what is otherwise a long string of days filled with studying. Chapssaltteok is typically stuffed with red bean paste or fruit. Extremely thick and chewy, this Korean dessert will keep you full for a while.

Bungeoppang is the Korean version of a pastry similar to the Japanese fish-shaped snack – Taiyaki. In Korea, ‘Bungeo’ means Carassius, a kind of fish and ‘Ppang’ means bread. This Korean dessert is always filled with sweetened red bean paste, but now, Korean street hawkers and eateries also fill it with thick custard, sweet potato, cheese, peanut butter and even ice cream. The street food is popular in the winter in Korea, so it is very easy to get it from a local market or convenient store.

Another favourite street food in Korea is Hotteok that is made from wheat flour, water, milk and sugar and can be stuffed with red bean paste, honey, cinnamon or peanut. The thick fluffy pancake is served up piping hot in a cup and you can find them in little food tents near markets and central areas around Seoul. This Korean dessert has a crispy outside and chewy inside that is slightly crunchy and syrupy. The cinnamon and peanut mixture melts in your mouth and makes your tastebuds cry tears of joy.

If you have ever attended a traditional Korean wedding or a first birthday party, then you may have seen the table with towers of Dasik. Usually made from rice flour or soybean flour, Dasik or Korean tea cookies come in a range of natural colours and flavours. Dating back to the Joseon Dynasty (1392-1910), these delicated-patterned cookies were piled high on a plate as an important part of ancestral rites, holidays and other ceremonies and typically served with tea. Additionally, this ancient Korean dessert is served as medicine such as the sesame treating food poisoning and the acorn used to suppress a cough.

Hodo-gwaja is a popular street food staple in Korea that you might grab as a snack on your way home from school or stop for during a long road trip. First created in 1934 by a couple, Jo Gwigeum and Sim Boksun, this traditional Korean dessert looks and tastes like walnuts. The small snack is made with crushed walnuts and wheat flous that is similar to a pancake in texture and  has a crisp, golden-brown interior. Hodo-gwaja are best when being served piping hot, particularly with a hot drink alongside it.

If you are up for a unique Korean flavour that can rescue you from a scorching summer day, Bingsu is a fantastic option. A traditional Korean dessert which is rich in both flavour, colour and style, Bingsu, also called Patbingsu, is made up of a large portion of shaved ice that is topped with condensed milk, syrup and classic toppings, for instance, red bean, mango or green tea. Classic Bingsu is usually served up in a cup while more elaborate affairs come in half of a watermelon or coconut. Treat yourself to a delicious bowl of Bingsu with your friends and enjoy the sweetness and coolness of different flavours whilst beating the heat and making plans for your next trip.