Different from the traditional way of camping with simple tents, glamping grants us exotic experiences where we can enjoy beautiful nature in luxury tents full of modern facilities while immersing ourselves in the wilderness.

SO, WHAT IS GLAMPING?

Glamping is a portmanteau of glamorous and camping, and describes a style of camping with amenities and, in some cases, resort-style services. Glamping has become particularly popular with 21st-century tourists seeking the luxuries of hotel accommodation alongside the escapism and adventure recreation of camping.

The word “Glamping” first appeared in the United Kingdom in 2005 and was added to the Oxford English Dictionary in 2016. The word is new, but the concept that “Glamping” connotes, that of luxurious tent-living, has appeared for a long time. 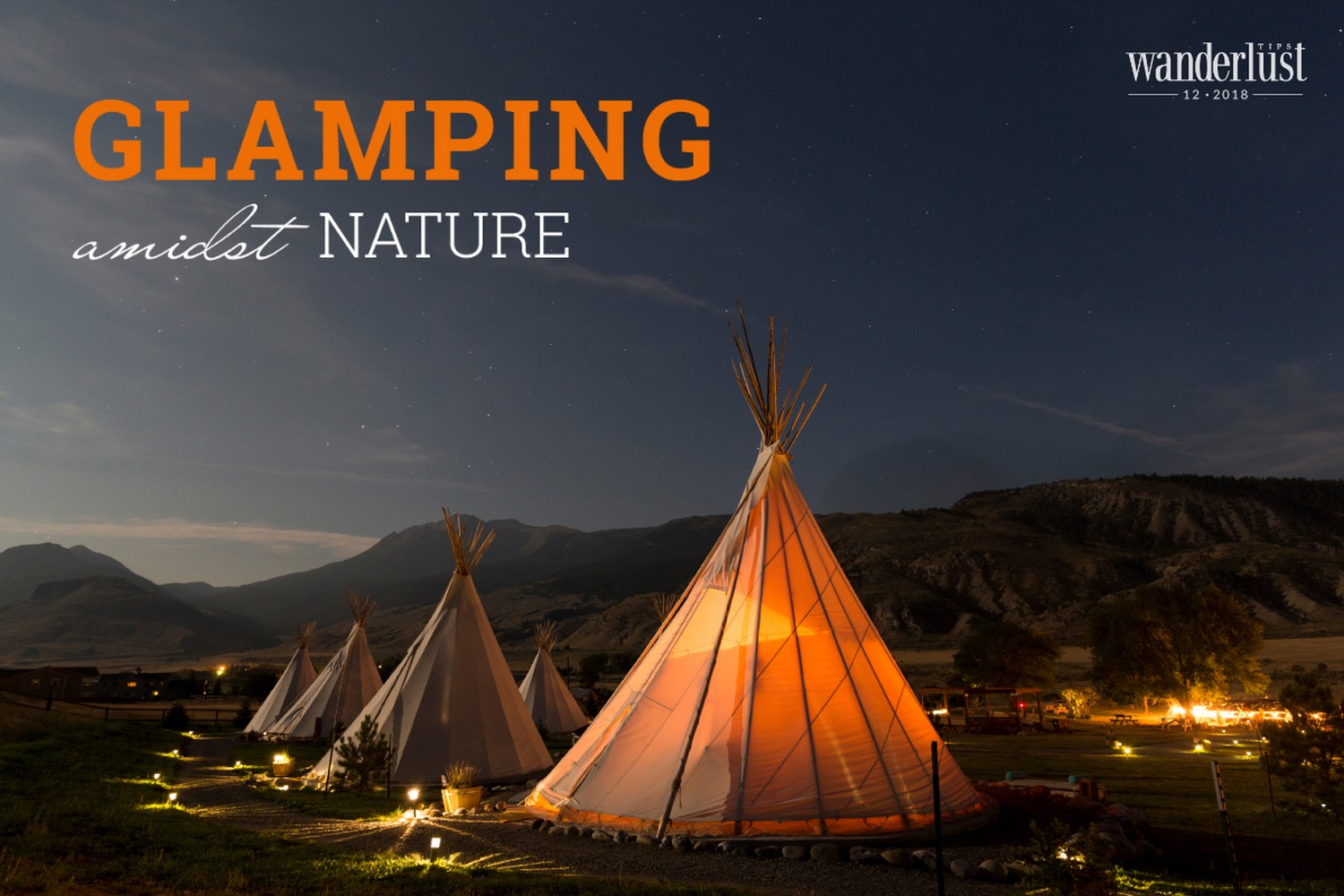 In the 16th century, the Scottish Earl of Atholl prepared a lavish experience in the Highlands for the visiting King James V and his mother. Here, the Duke pitched lavish tents and filled them with all the provisions of his own home palace.

Probably the most extravagant example of palatial tent-living in history was the Field of the Cloth of Gold, a diplomatic summit in northern France in 1520 between Henry VIII of England and Francis I of France. Some 2,800 tents and marquees were erected, and fountains ran with red wine.

At around the same time, the Ottomans had ostentatious, palatial tents transported from one military mission to the next. In order to conquer new lands, the Ottoman army had to travel long distances, which required discipline and great organization. In this respect, the experience and traditions of ancient Turkish nomadic culture proved valuable. Therefore, the military encampment was extremely well-organised for maximum convenience, from the palace-like tent complex down to the tents of the lowest ranking soldiers. 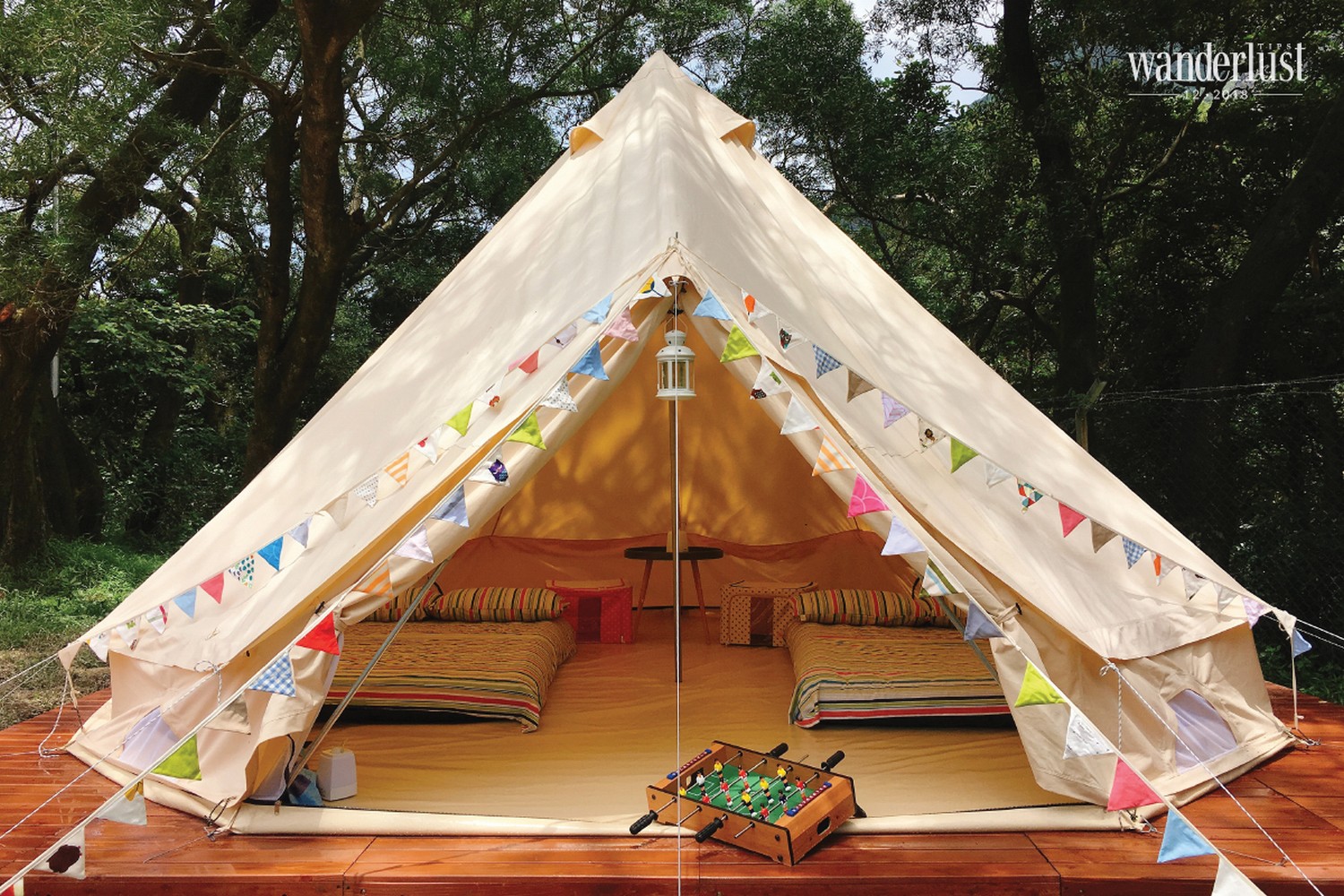 Besides military purposes, tent culture was of crucial importance in the daily life of the Ottoman. The tents were richly decorated in ceremonies, celebrations, or long trips of the Sultan. Some 400 years later, in the 1920s, an African safari became “the thing to do” among wealthy Britons and Americans. However, wealthy travellers, even those in search of adventure, were not willing to sacrifice comfort or luxury. From electric generators to folding baths, and cases of champagne, travellers were afforded every domestic luxury while on adventure in Africa.

This way of camping became increasingly popular, and 100 years later, Glamping has officially appeared and become a popular travel trend.

Glamping provides the most luxurious personalized services in order to offer the best comfort for customers. The facilities of Glamping are similar to those of luxury hotels, which is far more incredible in comparison with normal camping. When customers book the most professional services, they can fully enjoy the trip as a team of chefs, mates, tour guides, stewards and therapists are always available to bring them the best services. Along with modern facilities, essential elements of a camping experience are still maintained. The tents are still put up amidst the beautiful wilderness, under a sky full of stars. 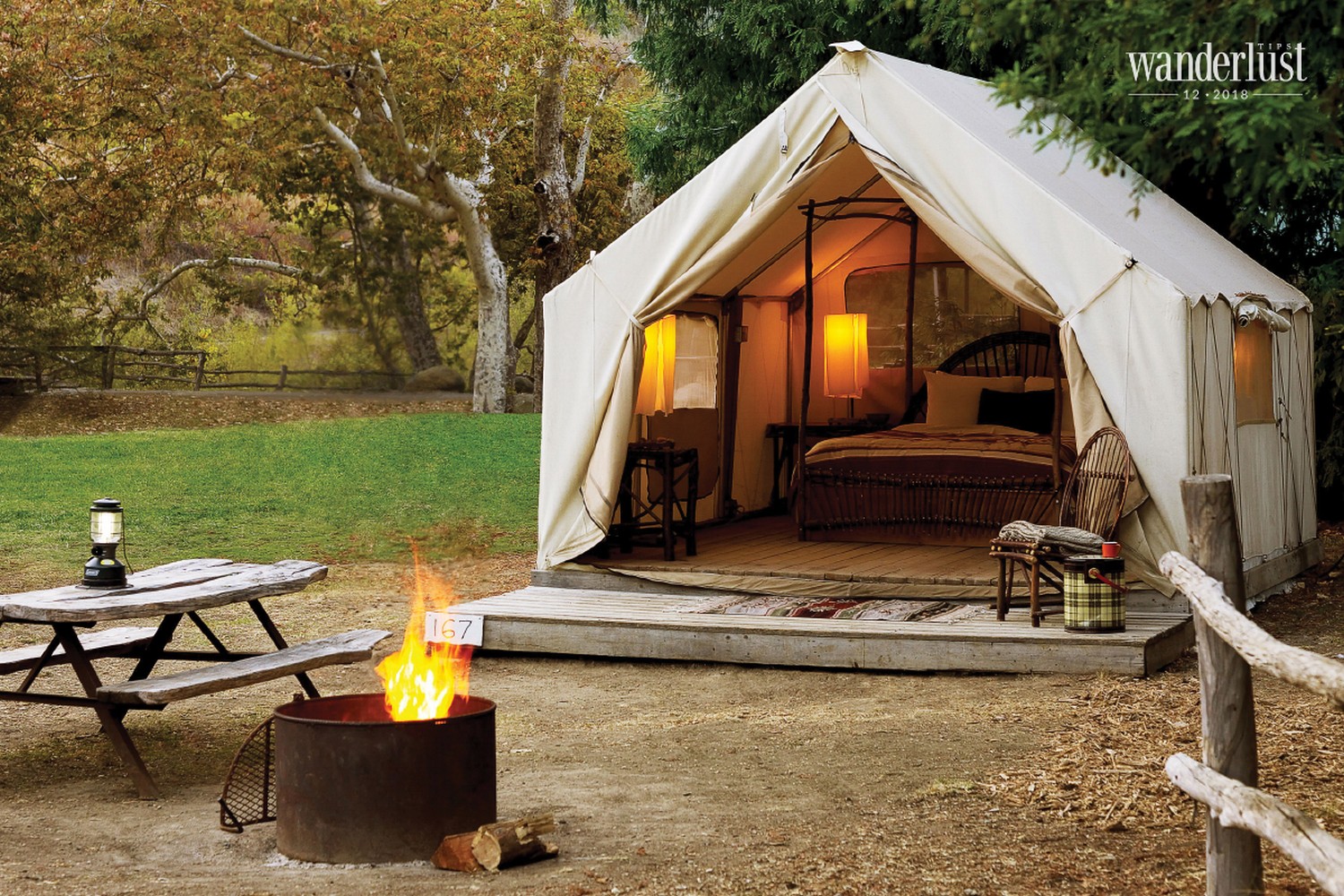 Glamping can give visitors all kinds of experiences. They can admire the breathtaking scenery of the African desert while lying in a comfortable large bed. They can also soak in a hot tub while watching the deer walking leisurely on the grass. Enjoying spa services amidst the greenery, or looking at the magnificent night sky while staying overnight in an igloo are also some experiences that Glamping can offer visitors.

Currently, there are many types of Glamping such as safari tents, the yurts of the Mongols, the tipis of Indigenous peoples of the Americas, domes, igloo, caves, tree houses, or cabins.

The idea of safari tents appeared hundreds of years ago. Today, safari tents are the premier lodging for upscale African safari organizations, and have been adopted by many glamping site owners in other parts of the world. Safari tents are large, rebuilt in a huge rectangular form, supported by a framework of aluminum or fiberglass poles. The walls and peaked roof are typically made of a light but weather-resistant and durable fabric-like canvas. Spacious and quadrangular interiors allow for simulation of home spaces and almost no limit to the potential for luxury. 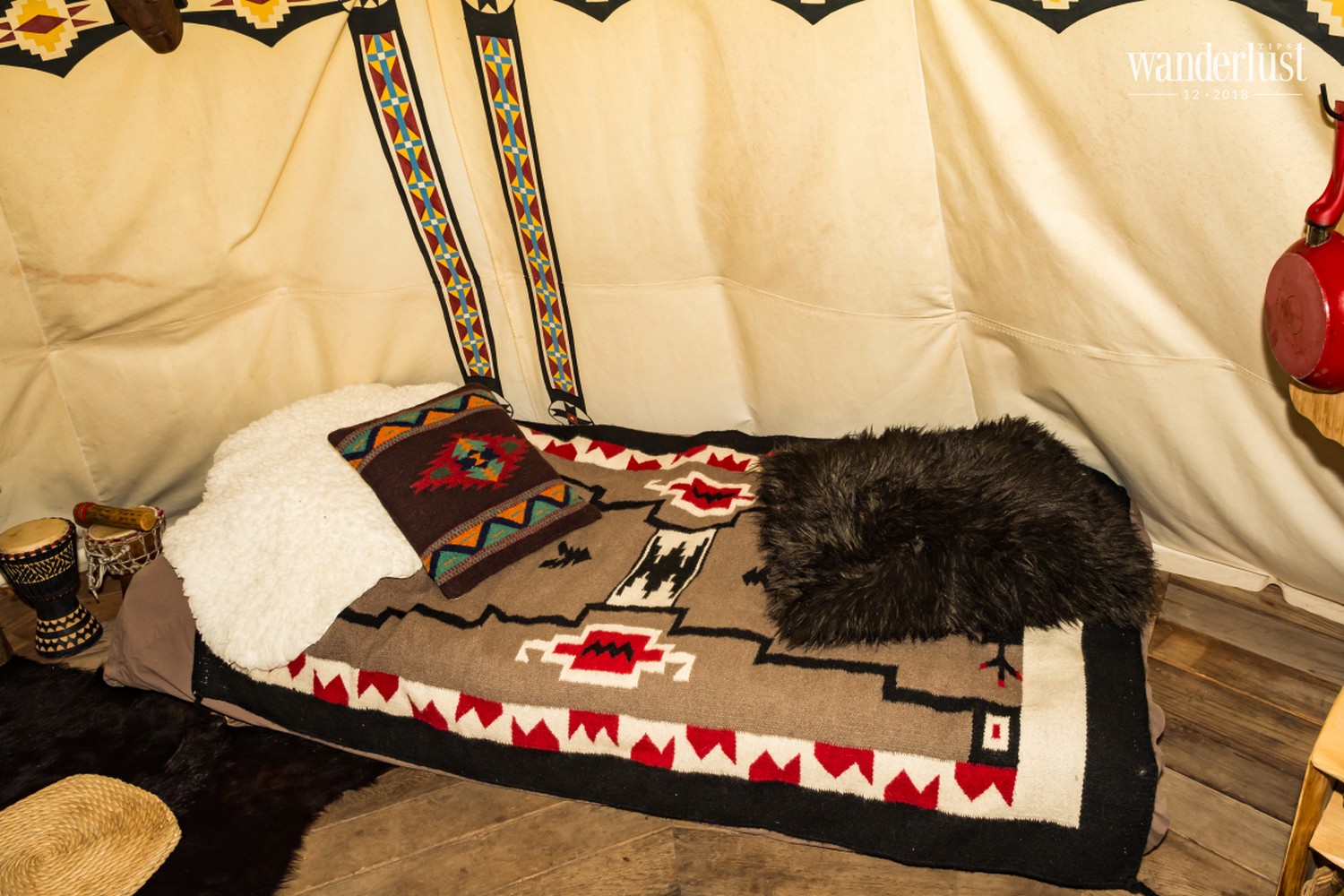 Historically built to withstand the long winter of Mongolia, today, the Yurt has become a popular type of Glamping.

Staying in a Yurt, tourists will have a chance to be immersed in nature while enjoying a good sleep in cozy pretty tents bearing cultural imprints.

Meanwhile, cabins or tree houses are no longer tiny spaces like those in our childhood memories. They are adapted to Glamping style and become 5-star luxury accommodation with beds, tables, chairs, cabinet, tubs, and 24/7 services. Here, tourists can sense the smell and sound of the forest in every single moment. Just by looking out of the window, they can admire the beautiful scenery and the vast sky.

Another type of Glamping – staying in caves – will transport you back into ancient times and enable you to experience historical space while enjoying the modern facilities of an authentic vacation.

Besides, an igloo is a more special option; instead of using common materials such as canvas, wood, or metal, people build igloos from ice. It is quite cold while staying inside the igloos, but if dressing properly, you can still enjoy a wonderful and unforgettable night. 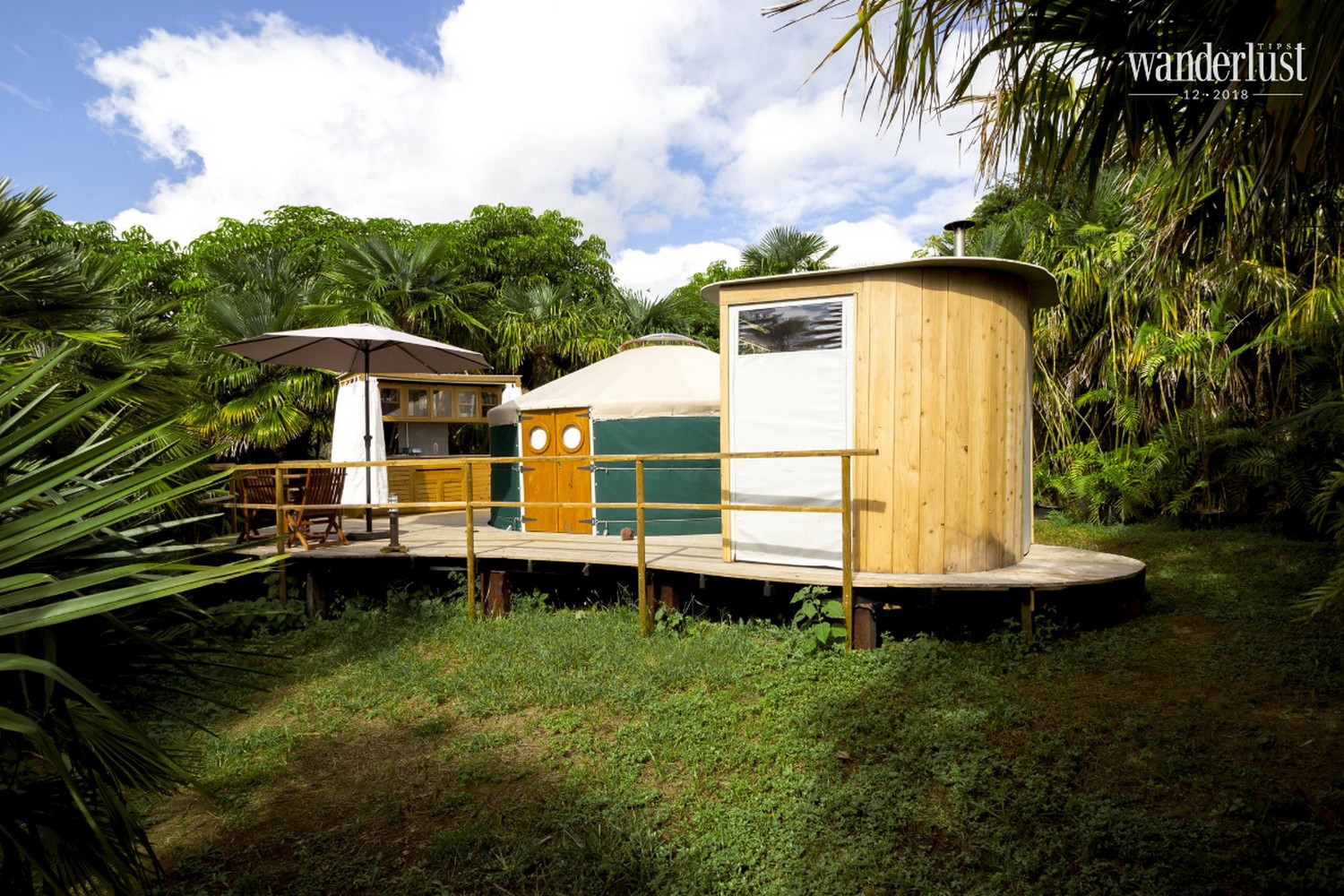 There are many other types of Glamping which are becoming increasingly popular and chosen as favourable accommodation for tourists to enjoy nature. And in some cases, Glamping is a style of luxury retreats which is totally different from the traditional camping, but the environment-friendly aspects are still valued and considered as priorities.