In all corners and streets in VietNam, from the early morning to sunset, we can hear the jingling sound of chopsticks, bowls, spoons, and ladles echoing from street vendors. People have preserved a culture of street food for hundreds of years. And whether in northern, southern, central VietNam or coastal regions, dishes served with a broth always play an important role in such an attractive culinary culture.

In the book “Hanoi and 36 Old Streets” written by Thach Lam, there is a dish honored as a treasure of the ancient capital. It relates to a story of a Confucian scholar; in his journey to visit Hanoi, when smelling the meat grilled on the hot charcoal, he immediately composed two lines of a poem:

Could it be the sweet-smell of Bun cha?” 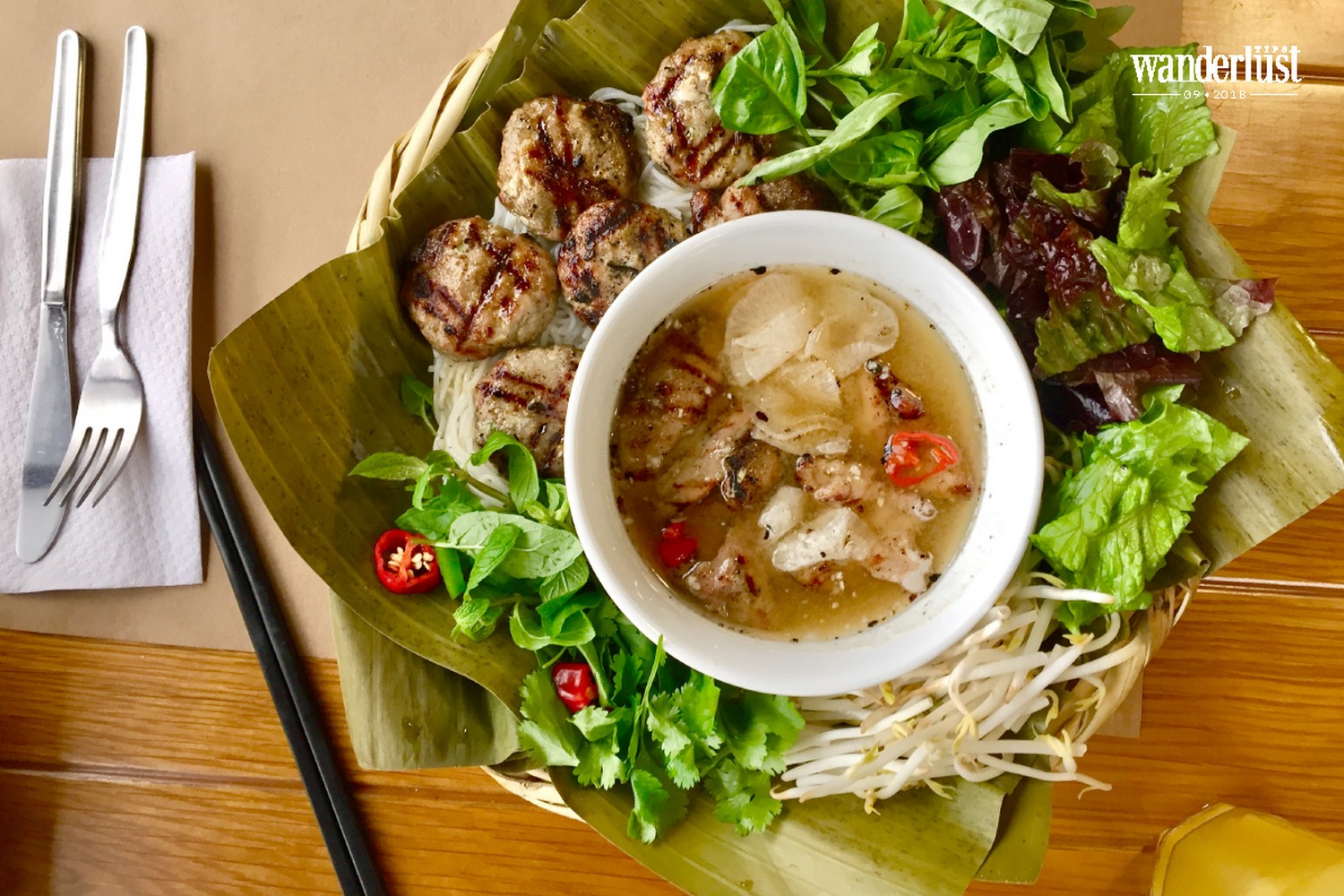 Born and raised in Hanoi, I have developed a strong bond with the local cuisine, and it has become an indispensable
part of my life. The flavour of a bowl of hot Pho enjoyed in the early morning, aromatic and crispy freshly baked bread, sticky rice with roasted peanut and mung bean is always there in my mind. And I love the douhua covered with sugar water filled with the fragrance of Sambac jasmine. But among the countless dishes of this historical Ncapital, bun cha (Vietnamese Kebab rice noodles) has always been the food I love the most.

Bun cha is cooked by combining many culinary arts of the Vietnamese. All featured ingredients of Vietnamese cuisine appear in this dish including pork, rice, vegetables, and fish sauce. The tangled vermicelli used in this dish is made from rice. The meat is deeply marinated and grilled on charcoal. The special hot fish sauce mixed with grilled meat is different from the ordinary pure fish sauce or plain broth. It is a perfect combination of many flavours including the saltiness of fishsauce, the sweetness of sugar, and the fieriness of chili. You do not need to visit an expensive restaurant to find an authentic flavour of Hanoi’s bun cha. Wandering around the street or going deeper into small alleys, to find street vendors of local people is what you need to do.

Bun cha in Hanoi is a great harmony of all tastes: the aroma of skillfully marinated grilled pork, the freshness of cilantro, the slightly sour flavour of vermicelli, the fiery, sour, saltiness, and sweetness of the fish sauce. If the dish lacks any flavours, it cannot be considered an authentic bun cha of Hanoi.

Hanoi, in my memory, is the sunny midday when the sunlight shines through the green leaves and falls on the plastic chairs and tables in a small corner of the street. It is where a young man properly dressed in the white shirt sits with his colleagues to enjoy his lunch. It is where a working woman takes off her palm-leaf conical hat while ordering a bowl of bun cha. It is also the place where an elderly sits alone and comfortably enjoys her portion. And I am one of them, sitting there, enjoying “the treasure of Thang Long” while watching the bustling street on an emotional midday.

CAKE SOUP FROM THE POOR COUNTRYSIDE

Leaving Hanoi, I decided to travel to Central Vietnam. I went to small street vendors, enjoyed the local cuisine, and fell in love with the cake soup.

Central Vietnam is home to many kinds of cake soups. In Hue, you can try the fish cake soup, while Binh Dinh is famous for grilled fish cake soup, and Phu Yen is known for the garlic chives cake soup. During a trip to Phu Yen, most visitors give great compliments of this dish, especially when enjoying it in restaurants on Tuy Hoa street. 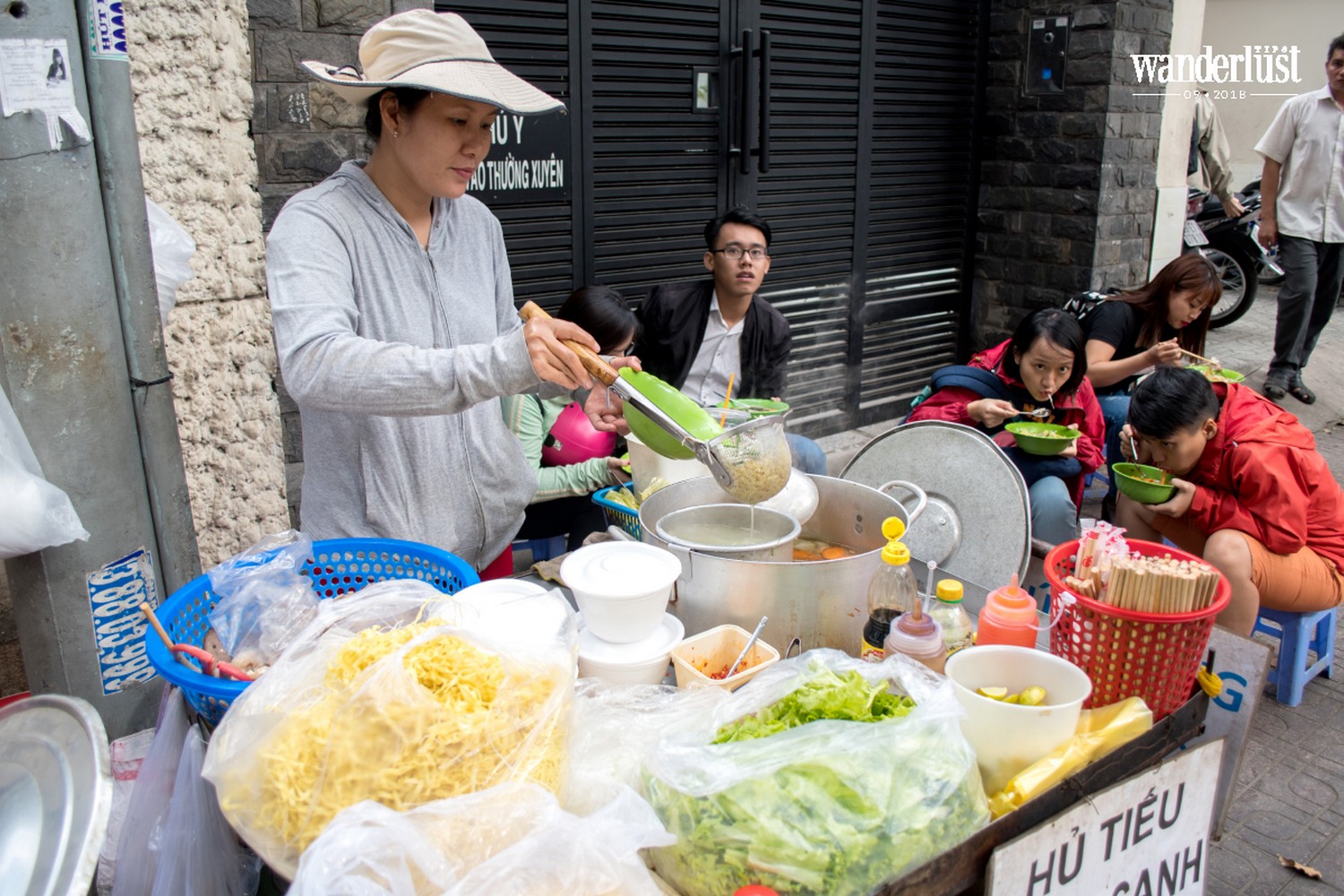 Unlike other specialties of Binh Dinh, garlic chives cake soup used to be a simple favourite morning dish of poor families. Then many families moved to the big city and earned a living by using the traditional cooking method of garlic chivescake soup. Since then, this dish has become a daily morning specialty of Tuy Hoa people.

The garlic chives cake soup of Binh Dinh is cooked in a different method. Instead of stewing tibia and fibula of the pork for the broth like in other provinces, they use small fresh fish, so the broth is slightly sweet, fresh, and not greasy. When enjoying this dish, you will feel like you are admiring a beautiful food painting covered with the green of garlic chives, the yellow of grilled fish, the white of cake and boiled quail eggs; while its flavour is also very attractive, it promises to awake all the senses of diners.

The rich salty aroma harmonizes with the delicious fieriness of black pepper and fried onion. Tasting the hot chewy noodles, enjoying the soup, then biting a piece of grilled fish, you will realize how delicious and exotic this food is.

Saigon is always bustling and prosperous; restaurants and street vendors are often crowded and full of laughs and slurps. The first time I visited Saigon as a student, I went to explore the food and was deeply impressed by the Vietnamese stew with organ meat. 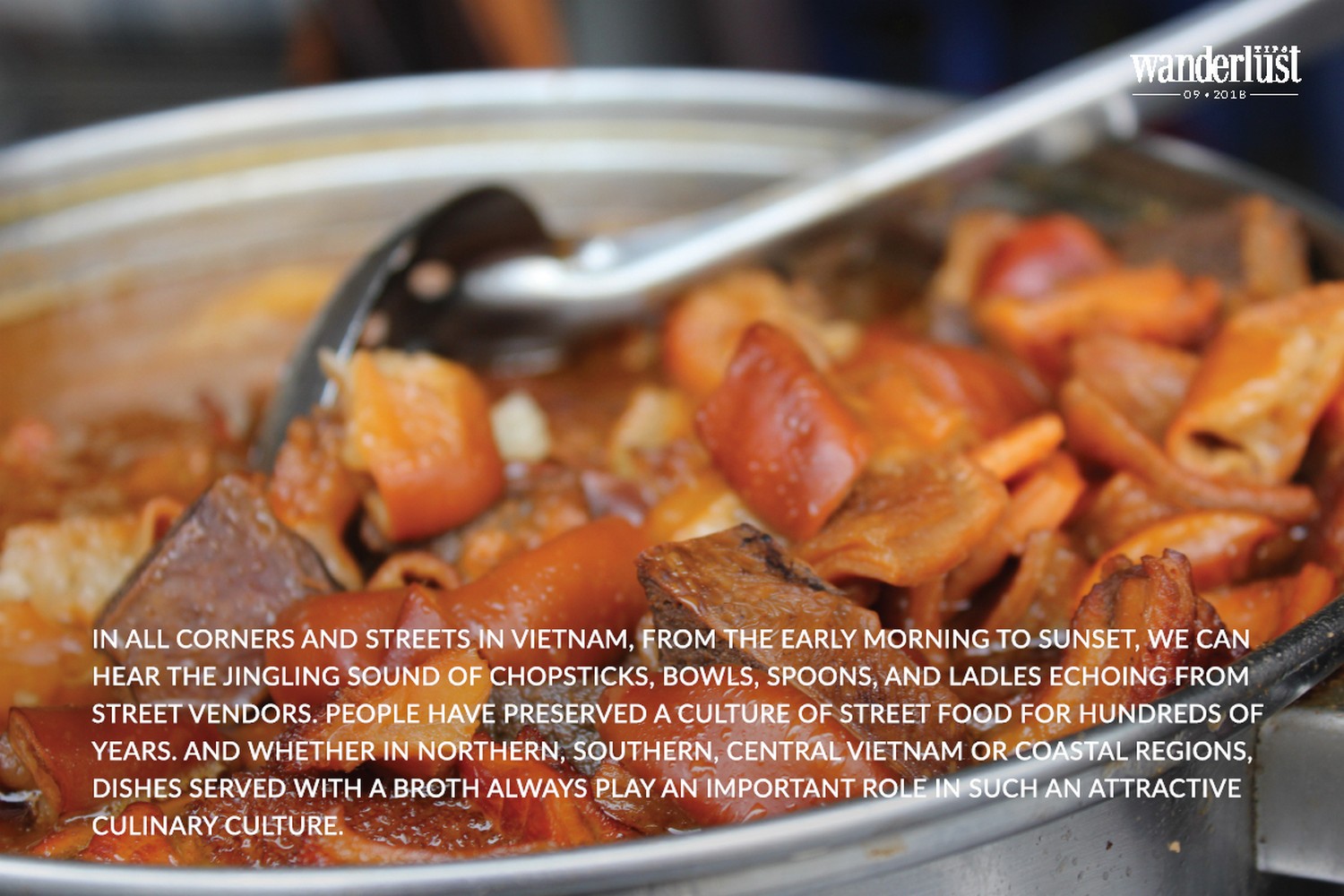 There are many street vendors who sell this dish in front of many schools in Sai Gon. The hot pots of soup filled with the sweet flavor of five-spice powder and coconut milk have become so familiar to people here and always remind them of a traditional specialty from ancient times. Any student living in Sai Gon knows about Vietnamese stew with organ meat.

This dish originated from China when Chinese people immigrated to Vietnam. They brought along this dish and made them a popular and favourite specialty in many regions (especially in Southern Vietnam and Ho Chi Minh city). The word “lấu” in Chinese means “marinade”, including spicy spices to reduce the fishy smell of “phá”.

Phá lấu is made from pork meat and offal, so it is very nutritious. However, it is only considered healthy when safe and clean standards are guaranteed and a moderate amount of meat is used, as animal offal contains fat content and high cholesterol. It is fortunate that today people have a high awareness of food safety, and at the same time try different ways to cook this dish.

People who have never tried this dish may think it is similar to the mixed hotpot, but phá lấu features Chinese herb flavours or the appealing aroma of spicy five-spice powder Different kinds of meat in phá lấu, though, have their own tastes and textures, harmonizing perfectly with each other. While pig ear and stomach is crunchy, the organs are tender and greasy.

The youth in Saigon have different ways in which they enjoy this dish thanks to its variety and great flavour. They can eat the non-stewed version (grilled or boiled offal only) in the late afternoon or Vietnamese stew with organ meat with noodles or bread when they are hungry. Vietnamese stew with organ meat and noodles or bread is one of the must-try dishes in Saigon.

You can eat phá lấu at any time of the day while chatting and enjoying drinks with your friends. When referring to Saigon street food, people always think of phá lấu.

Until now, whenever I have a chance to return to Saigon, I often spend time visiting my favourite street vendor in a small lane. Enjoying the hot Vietnamese stew with organ meat while listening to the pleasant noise of chatting, a joyfulness rises in my mind as I am immersed in the familiar atmosphere of Saigon.