Croatia, with an area of only 56,594 square kilometres and a population of more than 4.5 million people, were admired by the whole world when they won second place at the world cup 2018. Not only does it have a united football team with the slogan “small country, big dreams”, Croatia is also a popular travel destination thanks to its greenery and peaceful scenery, in which the capital Zagreb and the natural masterpiece of Plitvice lakes, are the most famous. 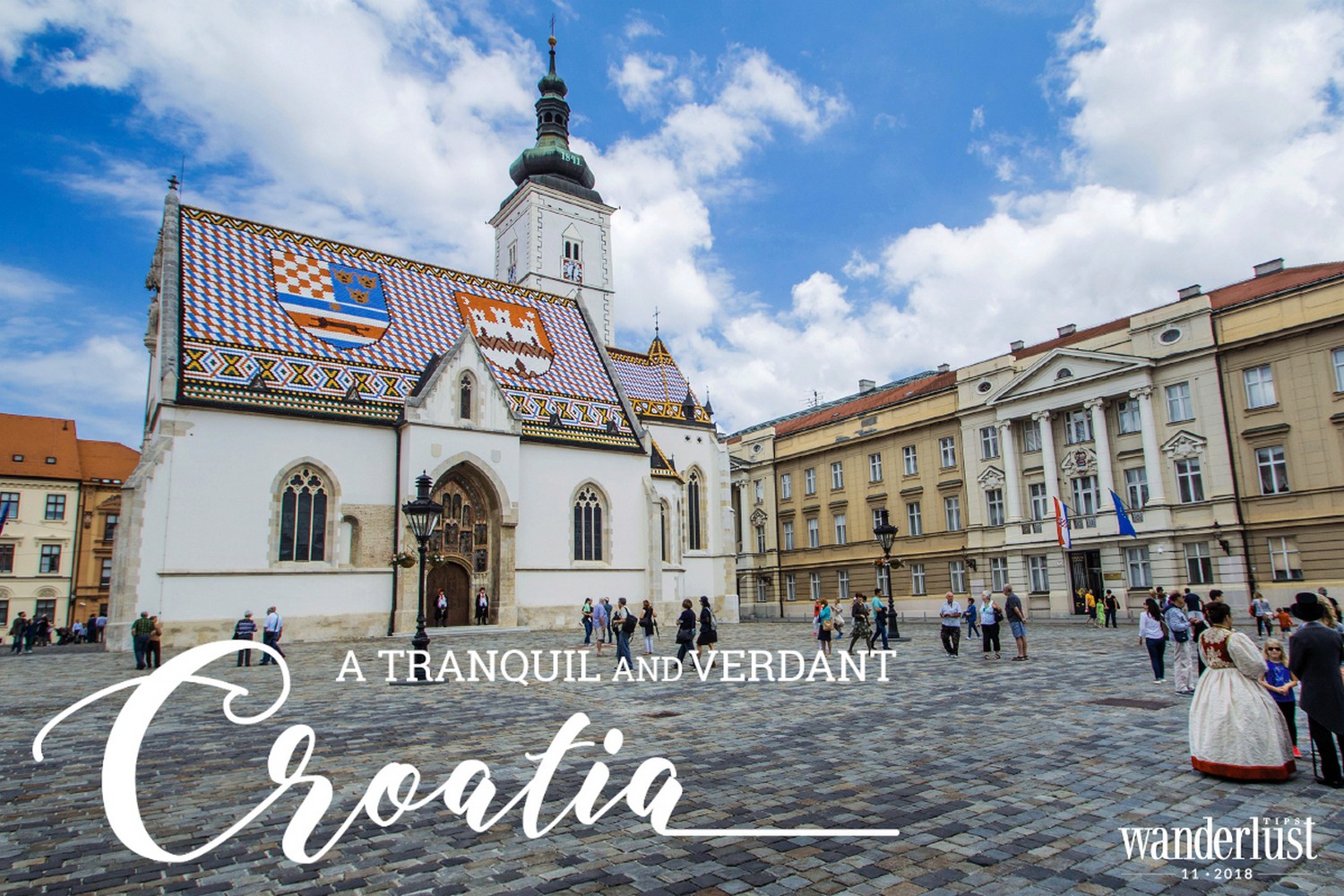 Zagreb is the capital and also the largest city of Croatia. Situated in the northwest, Zagreb bears the architecture of the Austro-Hungarian Empire of the 18th and 19th century. Here, you will easily find the “heart” of the ancient town area of this city – the Zagreb Cathedral, which was built in Gothic style and features two twin towers with a spiral structure that looks like they are reaching up towards the deep blue sky. The entrance to the cathedral, which appears like a masterpiece of art, gains the great admiration of a lot of visitors. In front of the cathedral is a fountain with a soaring statue of Mary, which is surrounded by statues of four golden, glittering angels. Just a few steps from here, walking along the small alley, you will find a bustling outdoor market – Dolac market. It is the most popular market in this area, which is famous for agricultural products such as vegetables, fresh fruits, simple household utensils, and homemade products. Each stall is colourfully decorated, with green being the primary colour of choice, and is arranged in straight lines, covered by umbrellas. The market is always bustling with crowds of enthusiastic sellers and buyers whose faces are filled with joy and happiness. 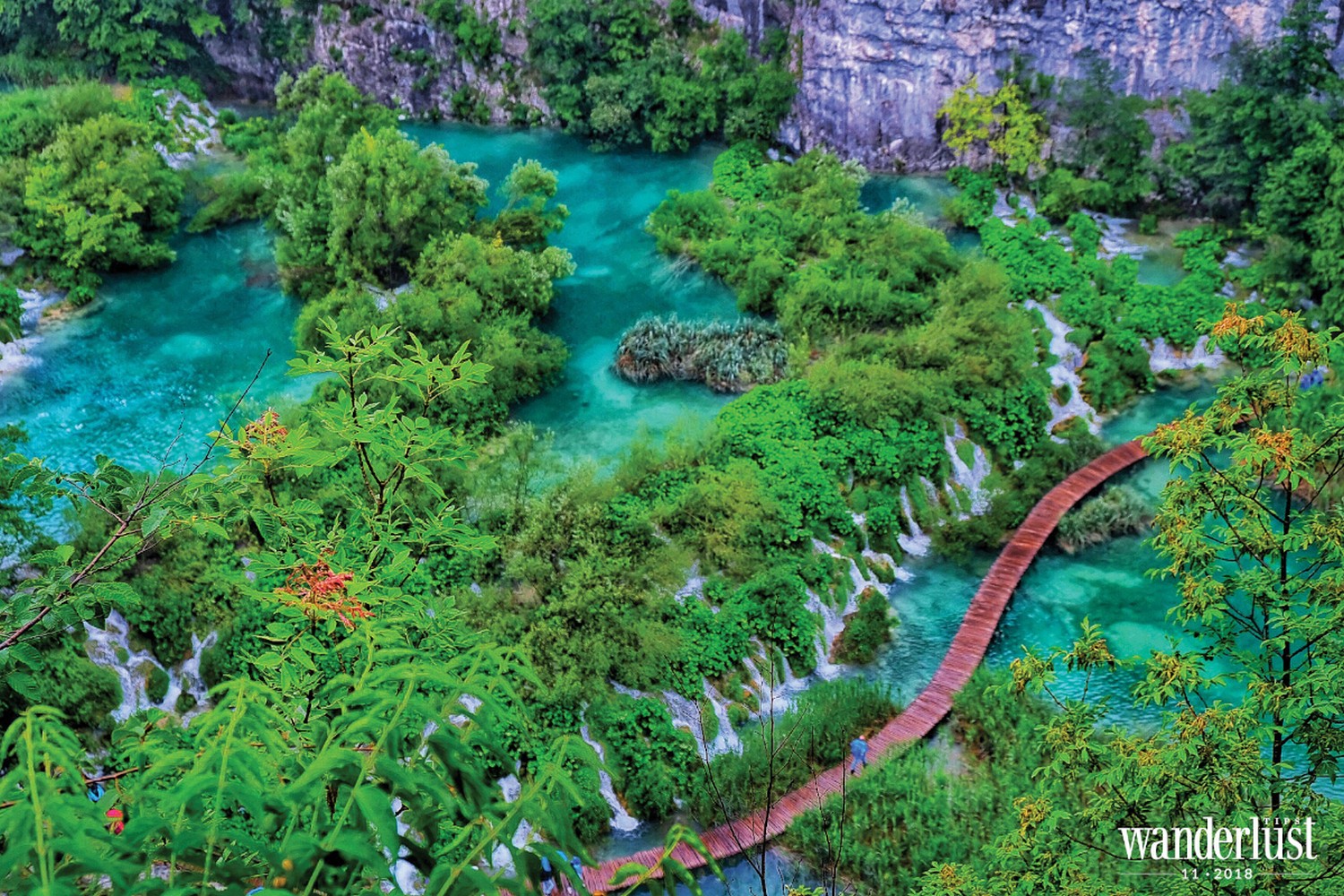 If Vienna – the capital of Austria – has St. Stephen’s Cathedral, Budapest – the capital of Hungary – has the Matthias church, it will be a huge mistake not to mention the Church of St. Mark in Zagreb, the capital of Croatia. At the Church of St. Mark, tiles are arranged in order to highlight the coat of arms of Zagreb city and of The Triune Kingdom which includes Dalmatia, Slavonia, and Croatia. The southern dome consists of many high-artistic sculptures that make this dome one of the most distinctive arches, bearing Gothic architectural characteristics, in the southern part of Central Europe.

Along the old town, near the Church of St. Mark, there are countless fine restaurants and cafés. Necktie shops with unique window displays show the history of the necktie knot style. Having originated in Croatia in the 16th century, the necktie is an important feature of traditional outfits. Later, the tie was favored by the French as a fashion item, and today it is widely spread throughout the world. 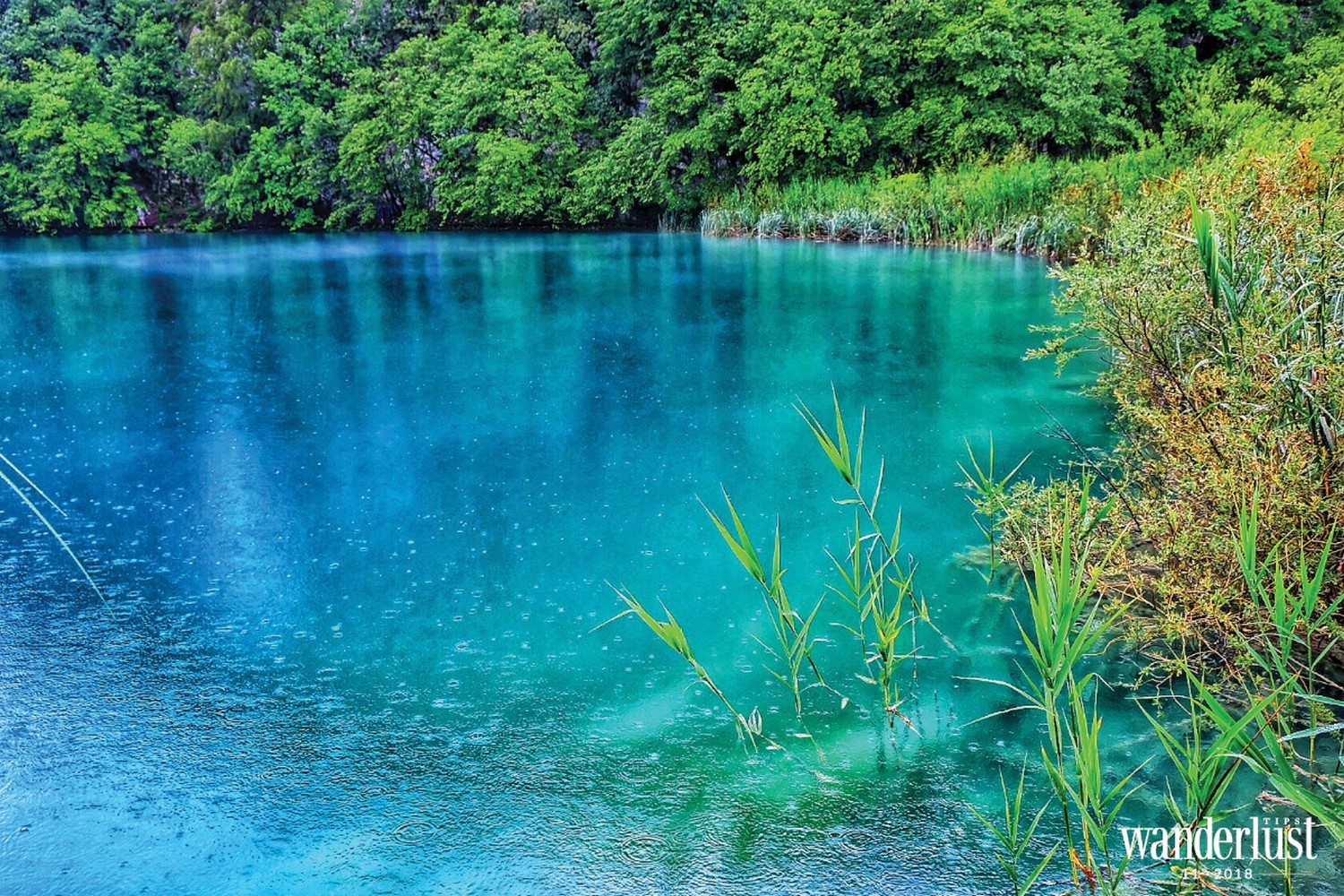 Zagreb brings us a sense of harmony between tradition and modernity, between the past and the present. At central Ban Jelačić square, the image of blue tramcars that run amidst the ancient architecture is not only beautiful but also leaves an immense impression of the harmonization of ancient values and modern features.

THE NATURAL MASTERPIECE OF PLITVICE LAKES

Not only preserving historical architectural sites and monuments, Croatia is also a green country with countless national parks, special reserves, and natural parks. Among them, the oldest national park as well as the most well-known protected area, Plitvice Lakes National Park is just 135 kilometres away from Zagreb. It is home to many waterfalls and lakes of different heights, occupying an area of approximately 297 kilometres. After being recognized as a World Heritage Site by UNESCO in 1979, this park welcomed an increasing number of visitors and has become a favourite park among the eight national parks of Croatia. 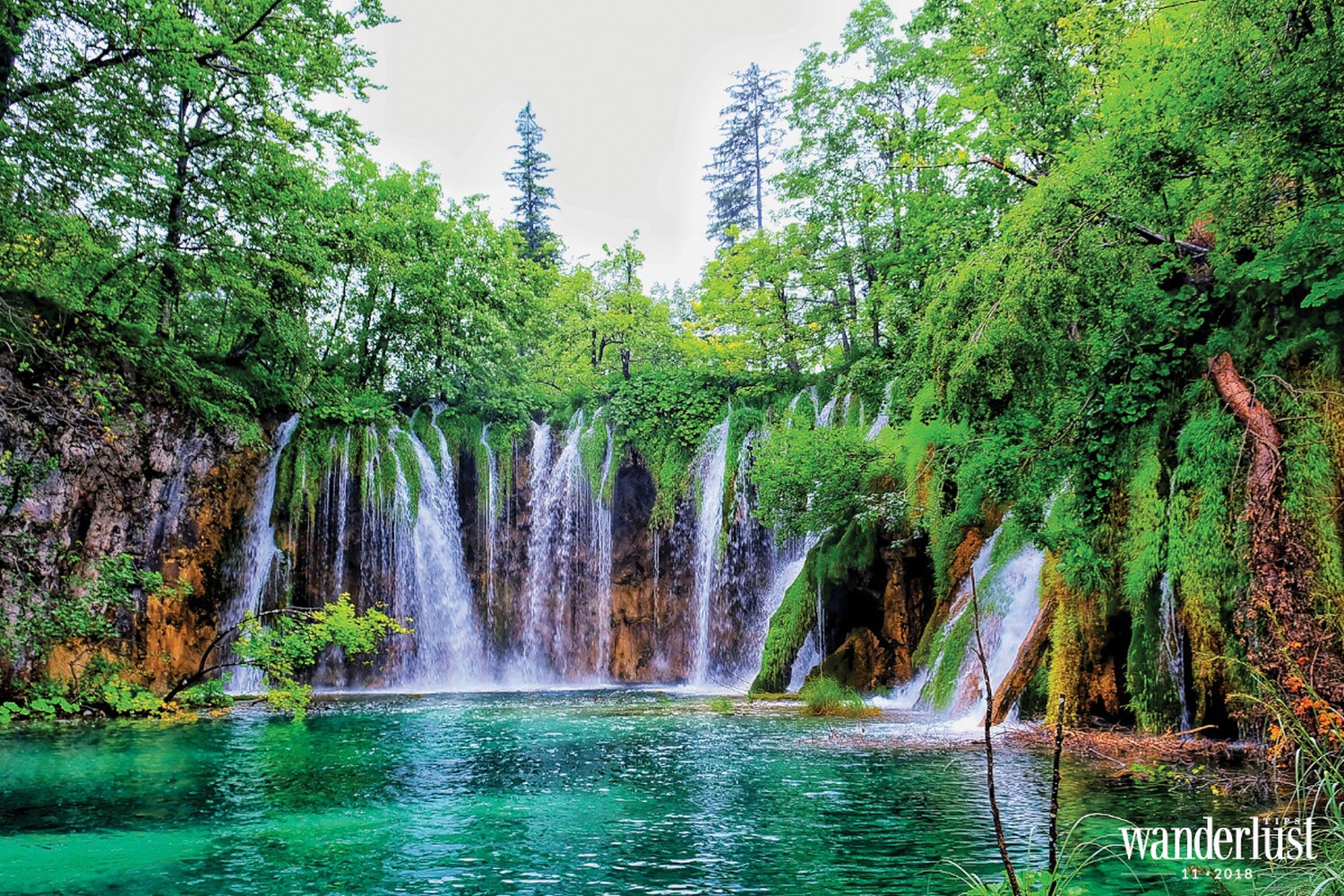 What makes Plitvice so famous? First of all, there is an impressive number of lakes in this natural complex. This park consists of 16 lakes separated into upper and lower clusters, creating a variety of waterfalls of sparkling foaming water. People call this ‘the happy champagne’ because the splash of water dancing in the sunshine looks beautiful, reflecting the joyfulness on the face of visitors. It brings us a lot of happiness when admiring the magnificence of mother nature. Every lake has its own unique colour of water bearing different hues of blue. Sometimes, it reflects a turquoise colour which looks heavenly dreamy. In addition, some lakes reflect the same blue colour of the ocean and is so clear that we can watch schools of fish swimming at the bottom of the lake. Nearby, winding wooden bridges across the pretty blue lakes bring a sacred and picturesque beauty to the surrounding scenery. The smoke and fog lingering in the air seems to contribute to the magical beauty of nature. 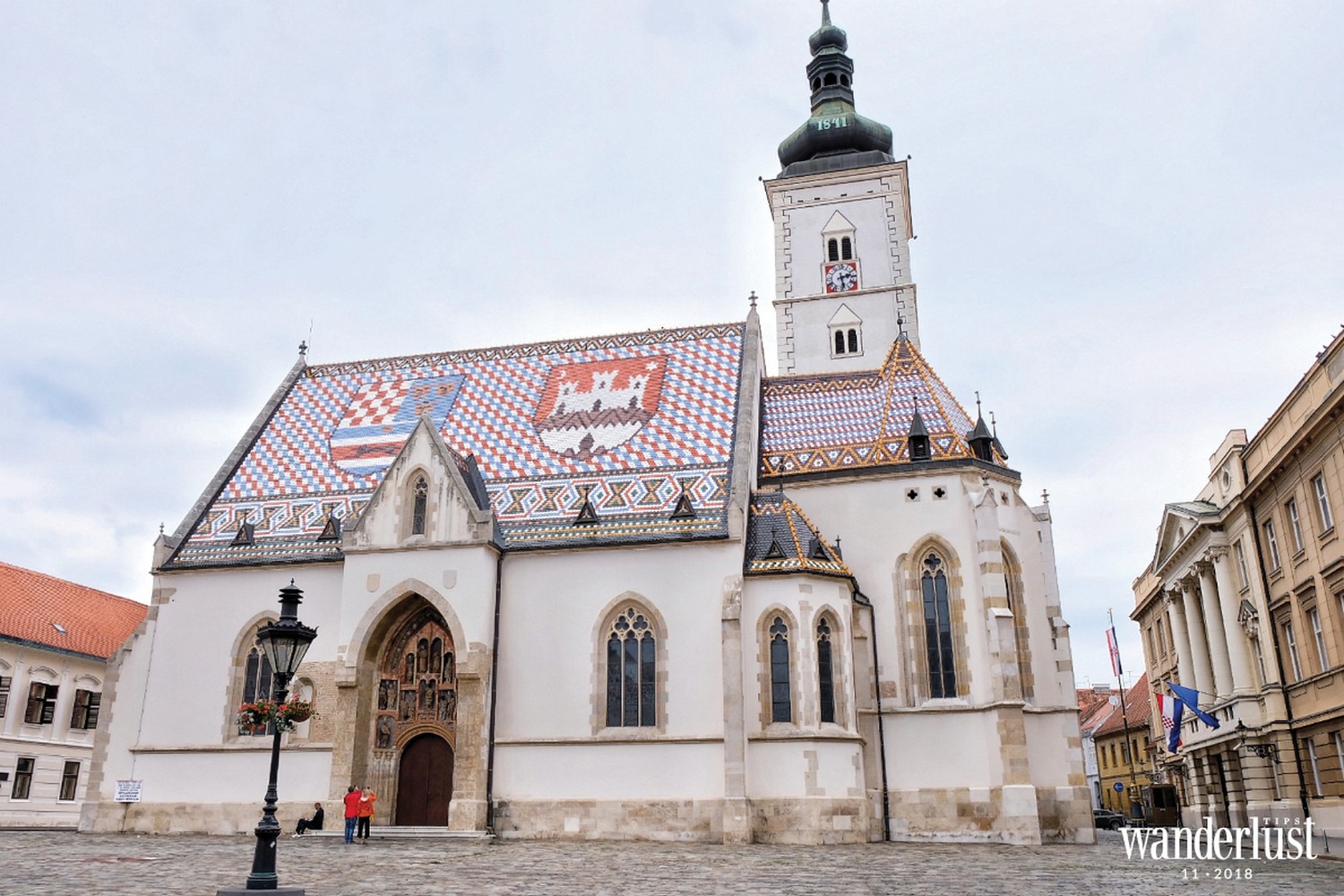 For sightseeing, visitors can walk around the lakes or leisurely travel by boats. The slogan of the Plitvice Lakes National Park delivers the wishes of many people: Leave nothing, take nothing, spend nothing but time.

VISA. Croatia provides national tourist visas. In addition, although Croatia has not yet joined Schengen, it has agreements with some countries and communities. That is why there are cases of exemption of national tourist visa for visitors. For example, visitors with Schengen visas, type C, multi-entry will be exempt from visa application. You should carefully check information about tourist visa requirements on the official website of Croatia before planning your trip.

CURRENCY. In Croatia, tourists can use Euro currency in some places, but people here mainly use Croatian Kuna. The exchange rate at the airport is around EUR1 ~ HRK7; HRK1 equals to VND3,800. Card payment is popular here, visitors will usually be asked to pay by card or cash before receiving bill payment.

ACCOMMODATION. When choosing a hotel in Zagreb, it is recommended that you book in the area near the Old Town because there are beautiful monuments and squares located in this area. A good 3-star hotel with favourable location costs about VND2 million per night. This area is quite safe for women to travel. However, you should always stay alert.

VEHICLES. If you use a taxi to travel, you should catch one with a metre clock and try to use a location app to estimate the distance, time, and price.

TRANSPORTATION. It takes more than 2 hours by car from Zagreb to Plitvice Lakes. In Plitvice Lakes National Park, camping is not allowed but there is a hotel. You can take a flight to Zagreb, drive to the National park. Alternatively, you can choose to fly to Zagreb, stay in Zagreb, and buy a day tour to Plitvice. A full day tour lasts about 12 hours, and prices range from EUR79 to EUR120. For travel convenience, you should choose a hotel which offers transport services from/to airport.

OTHER NOTES. In Plitvice Lakes National Park, the walking path is relatively smooth but long. The path through 8 out of 16 beautiful lakes is already 8-9 kilometres. It is recommended to pack comfortable and non-slip shoes. There are many wooden bridges which beautifully cross over the lake, but the gap between the wooden slats on the bridge is quite wide, so be careful to avoid falling down. If it rains, the road will be slippery, so you should not carry too much heavy stuff. It is recommended to take a backpack or cross-body bag.