Ho Chi Minh City is Vietnam at its most dizzying: a high-octane city of commerce and culture that has driven the country forward with its pulsating energy. A chaotic whirl, the city breathes life and vitality into all who settle here, and visitors cannot help but be hauled along for the ride. 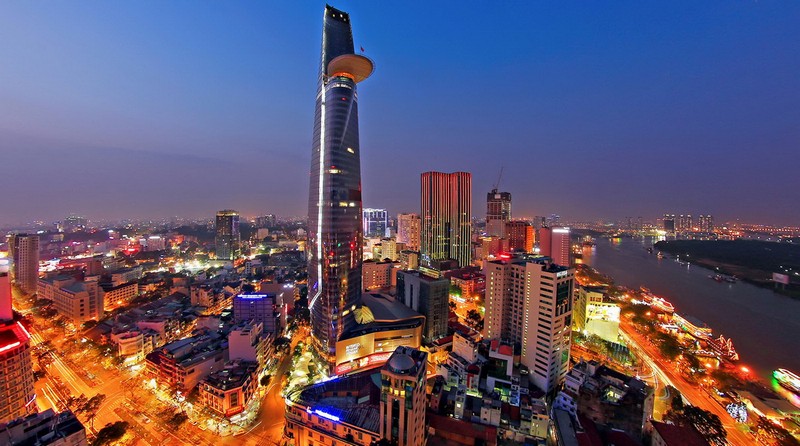 Despite its formal name change, the sprawling southern Vietnamese metropolis of Ho Chi Minh City, is still widely known as Saigon—its name prior to being taken by North Vietnamese troops in April 1975 at the conclusion of the Vietnam War. In the four decades since Vietnam’s reunification—and particularly over the past decade—rapid economic development and a construction boom have drastically altered the city’s physical complexion, if not its character.
The contrast between old and new comes into stark focus even as the city whips past in a blur from the back of a Yamaha motorbike. Vendors slowly push bicycles laden with flowers, fruit, and baked goods past storefronts like Salvatore Ferragamo and Starbucks. Men loll on the back of parked motorbikes swiping lazily at smartphones, shaded by the growing cast of office towers crowding the city’s skyline. Rooftop bars, swimming pools, restaurants, and nightclubs now dot the skies—though in a former time some, like the U.S. embassy, served as evacuation centers for U.S. military helicopters during the final hours of the war.

GET A CAFFEINE FIX

The Old Compass Cafe just off Pasteur offers serene surroundings in the otherwise chaotic city center alongside quality European and Vietnamese coffee drinks and a small menu of excellent Vietnamese bites, beer, and wine.
A regular hangout for expats and travelers, Au Parc is a Middle Eastern and Mediterranean restaurant, but its enviable position alongside the park at Independence Palace makes it an attractive vantage point for enjoying a morning coffee as the city awakens.

Outside the city center in District 3, the family-operated, 79-year-old Cheo Leo Cafe still serves cà phê vợt, or “stocking coffee,” brewed by an antique method of straining coffee through a long, sock-like filter into traditional clay pots before serving.
Hatvala on Lê Thánh Tôn offers an expertly curated range of locally sourced teas and coffees that can be enjoyed in a well-appointed tasting room as well as beans and tea leaves to take home. Staff can also prepare a tea tasting of several varieties—call ahead for availability. 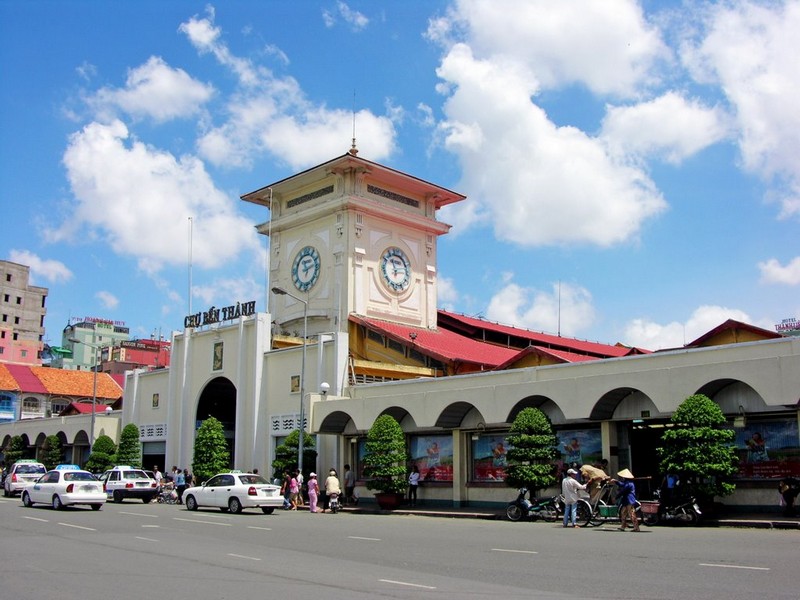 Centrally located in District 1, Bến Thành Market is one of Ho Chi Minh City’s most popular, offering goods like Vietnamese silk, handicrafts, T-shirts, souvenirs, and street-style cuisine. Haggling is encouraged and expected, and good Vietnamese silk can be bought on the cheap for those who can spot quality and are willing to stand tall in the face of a highball offer.

Opposite Bến Thành Market, Lê Công Kiều Street—also known as Antique Street—is lined with narrow storefronts selling porcelain, art, old coins, furniture, religious statuary, colonial-era artifacts, and U.S. military relics. Recognizing the difference between genuine and counterfeit items can be tough, and haggling rules remain in effect. Those with a specific interest in military memorabilia may have better luck at Dân Sinh Market a few blocks to the south, a clearing house for military kit left behind by the French, U.S., and various Vietnamese forces that have occupied Ho Chi Minh City throughout the past century.
Bình Tây Market in Ho Chi Minh City’s largest Chinatown district mainly serves locals, and while less interesting to souvenir shoppers, much of what’s sold there comes in bulk. Bình Tây Market includes both a sprawling food market packed with local and unique Vietnamese and Chinese ingredients as well as a food court serving regional favorites. Come for breakfast—that’s what the locals do. 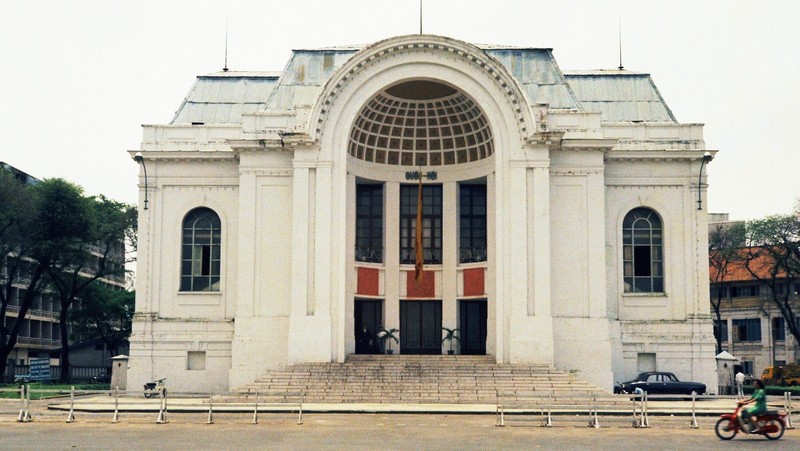 Located on the northern edge of District 1, the Jade Emperor Pagoda—built in 1909—is a tranquil Taoist homage to the ‘God of the Heavens’ (Ngoc Hoang). A functioning place of worship, the temple complex teems with Taoist and Buddhist divinities and symbols, including an incense-shrouded statue of the Emperor himself.
Now home to the city’s ballet and symphony, the Saigon Opera House was built in 1897 and briefly served as the Lower House assembly of South Vietnam after its establishment in 1955. Nearby, the Saigon Central Post Office, designed by French architect Marie-Alfred Foulhoux (though often erroneously credited to Gustave Eiffel) and completed in 1891, provides what is perhaps the city’s best example of French Colonial period style, boasting high, barrel-vaulted ceilings, liberal wrought iron accents, and a beautifully tiled floor.
The Notre Dame Cathedral, completed in 1880, holds Sunday morning mass and is open for tours every other morning of the week. Many visitors, however, find the statue of the Virgin Mary standing in front of the Romanesque cathedral holds more mystique. In a so-called miracle, a tear reportedly streaked down the statue’s face in 2005, though this has not been recognized by the Vatican. 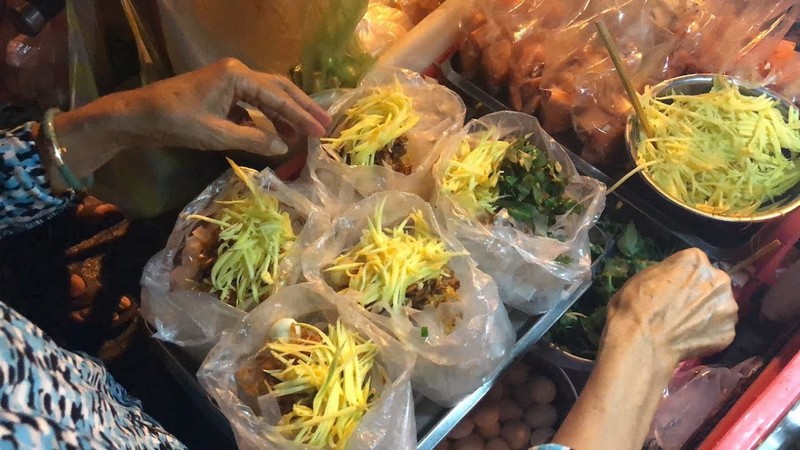 Travelers burned out on Vietnamese staples like pho can find just about anything, from seriously good Mediterranean mezze (try Beirut near the old opium refinery building) to Carolina-style barbecue pork ribs (seriously—inquire at Jake’s American BBQ on Pasteur).

Cuisine originating closer to home includes hủ tiếu, a southern Vietnamese dish of rice noodles and pork in a pork-based broth that originated with the region’s long-ago Chinese settlers (try it at Quán Hủ Tiếu Mỹ Tho Thanh Xuân, a 40-year-old joint tucked into an alleyway in central Ho Chi Minh City). Though not exactly local, Bun Cha is a northern Vietnamese favorite, comprised of grilled pork served over rice noodles and served alongside various herbs and a sweet dipping sauce.

Pho lovers will have no problem tracking down a warm bowl of that ubiquitous, expertly seasoned beef noodle soup (Phở Quỳnh and Phở Cao Vân are popular local places), as well as other lesser known savory dishes like bò kho, a French-influenced, but very Vietnamese, braised beef stew. 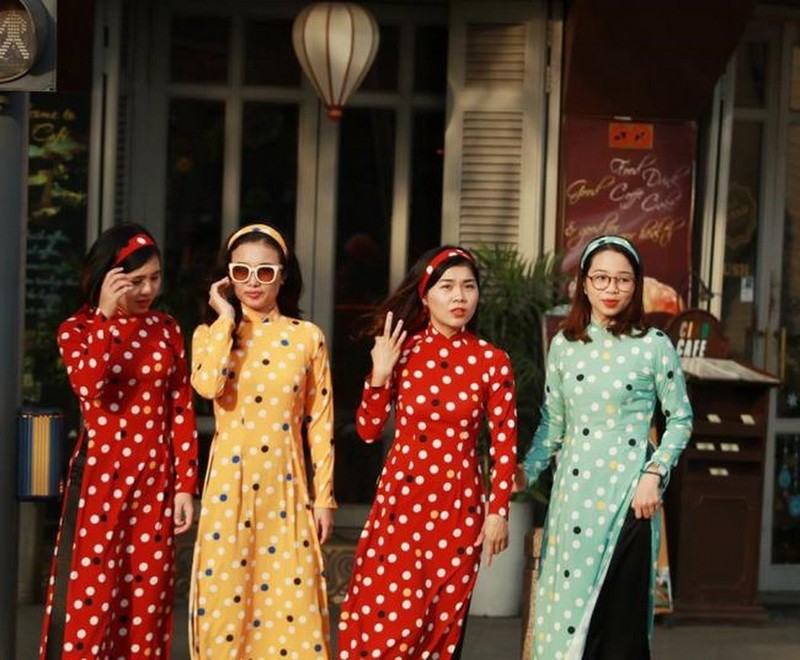 For three years in the early 1950s, English novelist Graham Greene holed up in the Hotel Continental Saigon writing The Quiet American, an alternately harrowing and romantic picture of wartime Saigon. Lovers of both history and literature still flock to the Continental’s historic bar overlooking the hotel’s charming courtyard.
The nearby Caravelle Hotel housed various embassies and news bureaus throughout the Vietnam War, making it a hub of international communication and an attractive watering hole for thirsty reporters. Bombed in 1964 and nationalized after the city fell in 1975, the Caravelle has undergone many changes since opening its doors in 1959, but the tenth-floor Saigon Saigon rooftop bar remains where it’s always been.
Arguably the best vantage point from which to take in Ho Chi Minh City—old and new—is the rooftop bar at the Rex Hotel, a historic French-colonial verandah now surrounded on all sides by the city’s vertical building boom. During the war, the U.S. military held its daily press briefings in the Rex Hotel bar, affairs that grew increasingly raucous as the gap between the war’s grim reality and official military accounts widened. Reporters nicknamed the briefings “The Five O’Clock Follies,” an afternoon ritual after which journalists, military officers, diplomats, and spies could all enjoy a few cocktails, take in the sunset, and watch the returning bombers. These days the bombers are gone but the stunning sunsets remain, and the only Five O’Clock Follies come in Collins glasses, over rocks, with plenty of vodka, rum, and Midori.