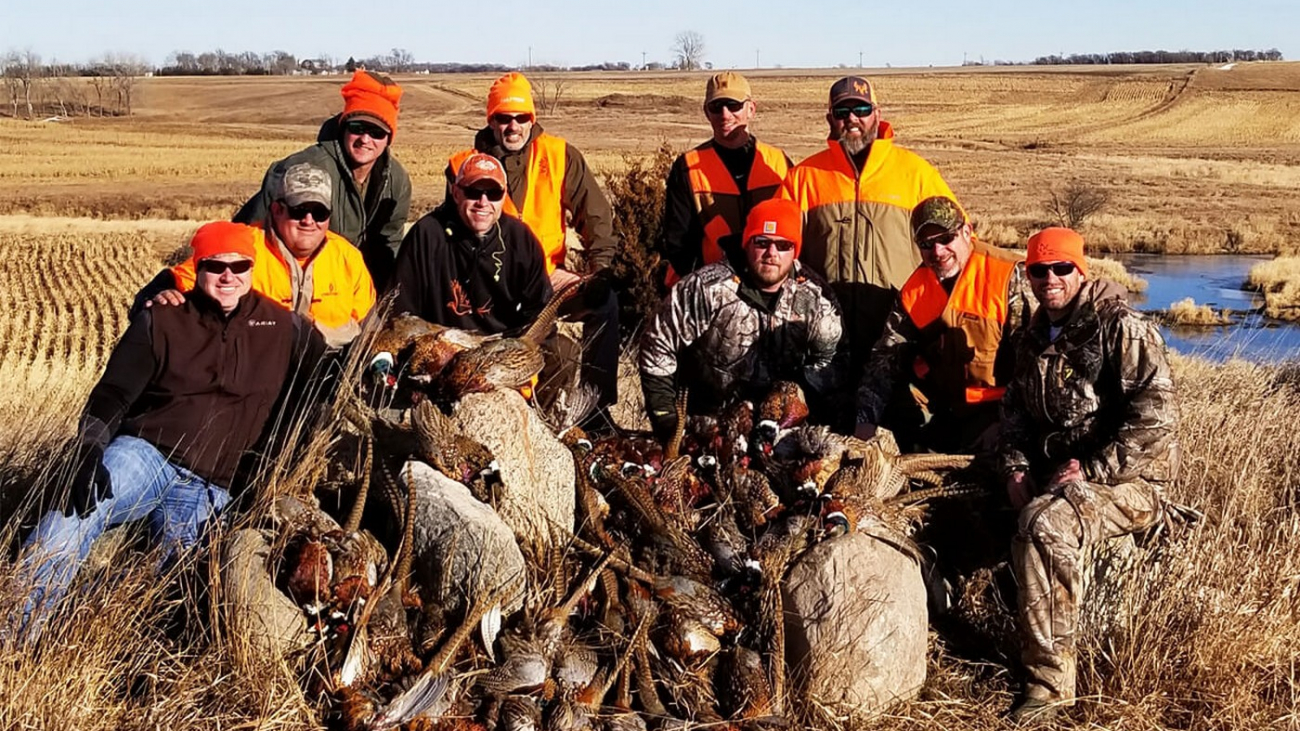 North Dakota has an excellent combination of waterfowl populations, wetlands and access. Put some distance between you and other hunters this fall. Follow your curiosity, and millions of migrating ducks and geese, to the Central Flyway through North Dakota – one of the busiest routes for birds of all feathers heading between northern Canada and the Gulf Coast or beyond.

Coming to North Dakota, you will surely be amazed at the sky filled with migrating ducks and geese, making this land one of America’s premier waterfowl hunting destinations. Every spring and fall, waterfowl come by the millions. And hunters, too. You can expect to be on the hunt for vast flocks of Canada geese or white-fronted geese and light geese. Duck species are also abundant, with mixed limits on mallards, gadwall, scaup, wood ducks, redheads, pintails, canvasbacks, blue-winged teal and mergansers.

The evergreen fields and rolling hills also make North Dakota famous for its seasons on upland game like ring-necked pheasants, sharp-tailed grouse and Hungarian partridge. Outfitting and guide services are available here, so come have the hunt of a lifetime!

The landscape varies across North Dakota. The Red River Valley in the east is flat, fertile farmland – the bed of the ancient glacial Lake Agassiz. The west is more rugged with rolling hills and buttes where ranching rules. Both ends of the state have lakes, rivers and wetlands that can provide good hunting experiences. 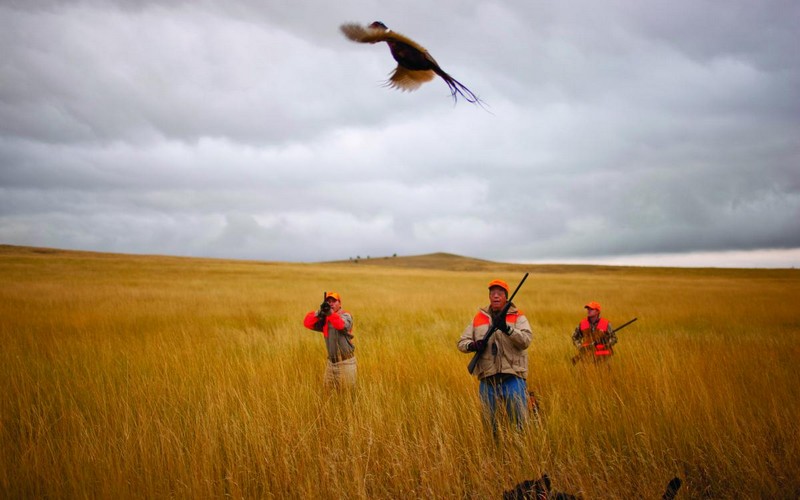 In the middle of the state, however, is the sweet spot for world-class duck hunting. This central to east-central region of North Dakota ranges from the eastern Prairie Coteau to the Missouri River with its year-round open water. The terrain comprises grassy, rolling prairies and croplands dotted with wetland habitat.

Sloughs, ponds, small lakes and meandering creeks seem to occupy every section of land. Each is surrounded by tall reeds and cattails, which provide perfect waterfowl production nesting cover. Beyond the cattails, Conservation Reserve Program (CRP) land and newly-harvested grain fields offer not only food for waterfowl, but also provide wide landing strips for a break from the long migration.

Favorite hunting areas include the Missouri River corridor and the Prairie Pothole region between Highway 3 and the Sheyenne River/Devils Lake basin. Many landowners throughout the region welcome hunters who ask permission, treat the land with respect and close the gates when they leave.

Hunters also find plenty of lands open to the public, including wildlife management areas, PLOTS (Private Lands Open to Sportsmen), state school lands and more than 230,000 acres of waterfowl production areas. North Dakota Game and Fish publishes maps every year detailing the location of every parcel of land open to public hunting, available for free in print at retailers and information stands around the state, maps and electronic land posting are also available on the department’s website. 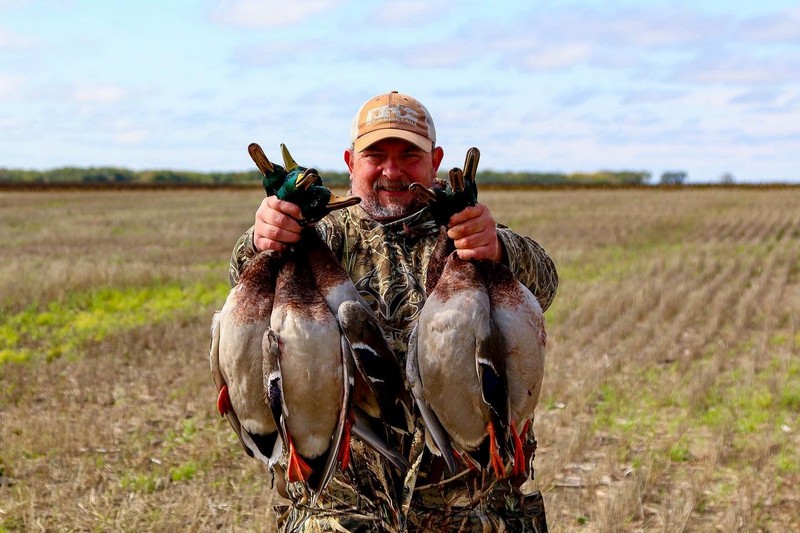 North Dakota has a lot of birds. For 2020, the breeding duck index was 18 percent from last year and the 13th highest on record. All duck species, with the exception of pintails, which were down slightly, are well above the 72-year average.

When duck season opens, hunters don’t have to wait around for the birds to show up. Species that summer in North Dakota are still around in full force. Those species include mallards, gadwalls, teal and widgeon. As the resident populations begin moving out, hunting remains strong as the species that nest farther north in Canada begin to arrive. Together, they make for a long, productive hunting season.

Hunters will also enjoy seeing the nearly 180,000 geese that either live in North Dakota or visit seasonally. The crisp fall air is often filled with the sound of honkers overhead as vast flocks of Canada geese, white-fronted geese, Ross’ geese and light geese (consisting of snow geese and blue geese) make their way south. It is a common sight to see stubble grain fields blanketed with geese as more circle in for a landing.

Tundra swans and sandhill cranes also have annual hunting seasons in North Dakota for resident or non-resident hunters. Special permits are required for both, and tundra swans have a bag limit of one tagged bird with a lottery-drawn license. 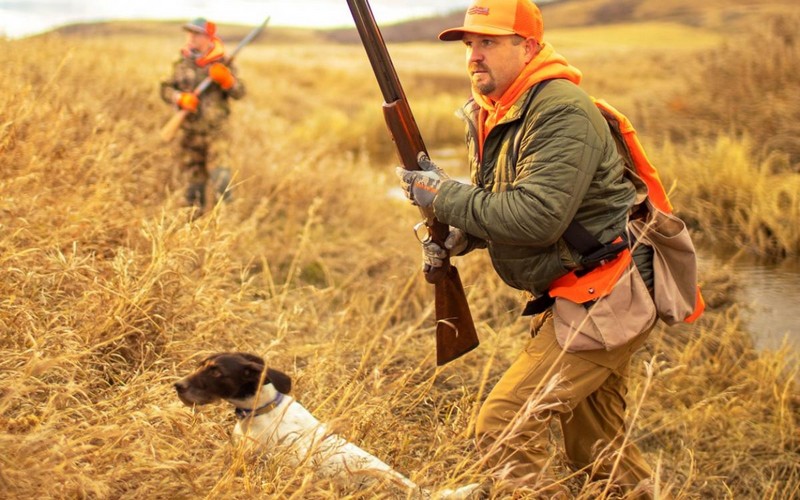 North Dakota’s regular seasons for ducks and geese typically begin in late September. With the early arrival of migrating Canada geese (as well as the resident bird population), an early Canada goose season typically opens in mid-August, depending on expected numbers. Official dates are published in August by North Dakota Game and Fish.

Along with waterfowl hunting, North Dakota is also famous for its season on ring-necked pheasants and other upland game like sharp-tailed grouse and Hungarian partridge. Pheasants are among the state’s most popular game birds with populations covering most of North Dakota.

In broad terms, the best pheasant habitat ranges through the same central waterfowl corridor, extending to the northern, western and southern borders. Again, public and private lands offer excellent access to the wetlands, fields and grasslands that pheasants love.

However, for any waterfowl or upland game, every hunter is required to have a basic certificate with a general game and habitat license and small game license. Waterfowl hunters must have a federal duck stamp as well.