Placed among the oldest continuously inhabited cities in Europe, Trier is a city worth visiting, especially for visitors who like Roman architect. The city managed to keep its Roman past, preserving the largest Roman gate outside of Italy, a palace built by Emperor Constantine and many other Roman structures. A city booming with life while still be able to maintain its heritage is for sure a place worth visiting.

A brief history of Trier

During the height of the Roman Empire, Trier was one of the cities in the West of the empire. It was once the largest Roman city in the 4th with a population of almost 100,000. The city once produced luxury goods for the Roman court, and military goods for the Western part of the Empire. Over time, the city changed hands many times, but remnants of the past remain, such as Porta Nigra or Kaiserthermen. 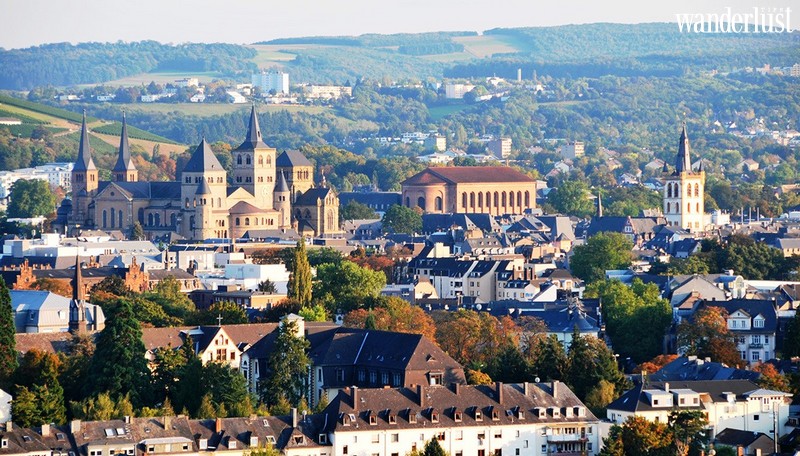 Overview of Trier | Image by @trip.com

Except for January and February, there cannot seem to be a wrong time to visit Trier. During springtime, the city is littered with greenery and, and in autumn, the city changes into large festival, celebrating the world-famous Oktoberfest (yes, Oktoberfest occurs in September). And, as the lyric of the song sung by Andy Williams suggests, Christmas in Trier is “the happiest season of all”, with its famous Christmas markets and hearty goods. 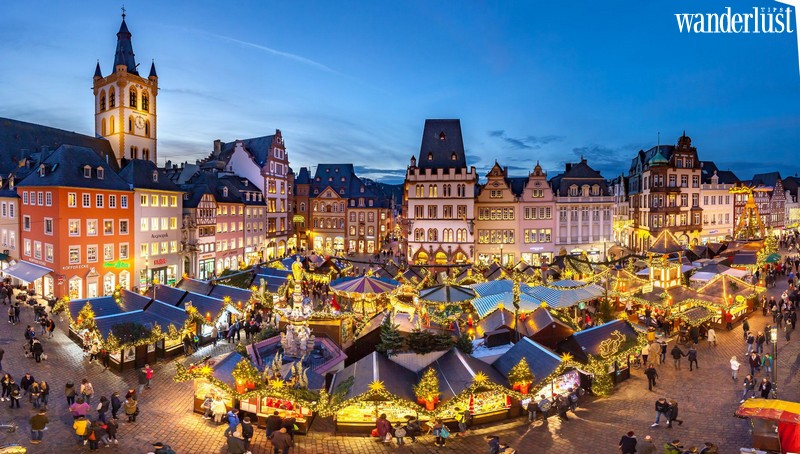 Best things to do in Trier

Literally translated as the “Black Gate”, Porta Nigra is one of the oldest and best preserved Roman architecture in the world. Dating back 170AD, the gate is 1852 years old, and the best place to start your Roman journey in Trier. You can walk inside the gate as well, with stairs installed in its interior. Inside the gate, you can even see iron fasteners that hold the sandstone that made the gate together, dating back since medieval time. 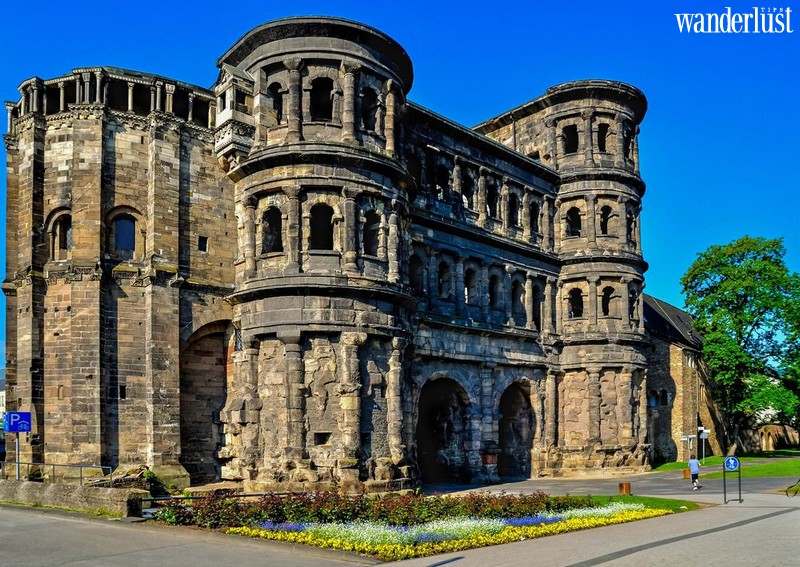 Another Roman structure, Kaiserthermen, or Roman Imperial Baths complex, is, as the name suggests, a bathhouse. During medieval time, it was converted into a well fortified castle and lost much of its initial build, but much of its Roman architect is still visible, especially the extensive subterranean passages and rooms. Artefacts were also stored in a museum located within the site as well. 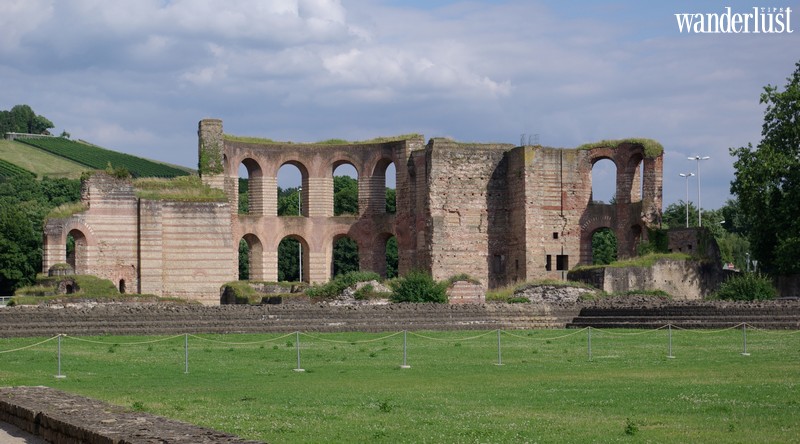 Another top destination when visiting Trier, the Amphitheatre, much like the Coliseum in Rome, albeit smaller, was an arena where gladiators fought. The Amphitheatre was very well-preserved, with its cellar nearly intact, and tourists can be taken down below the amphitheatre, where gladiators would arise from. There are also reenactment shows in Saturday and Sunday during the summer. 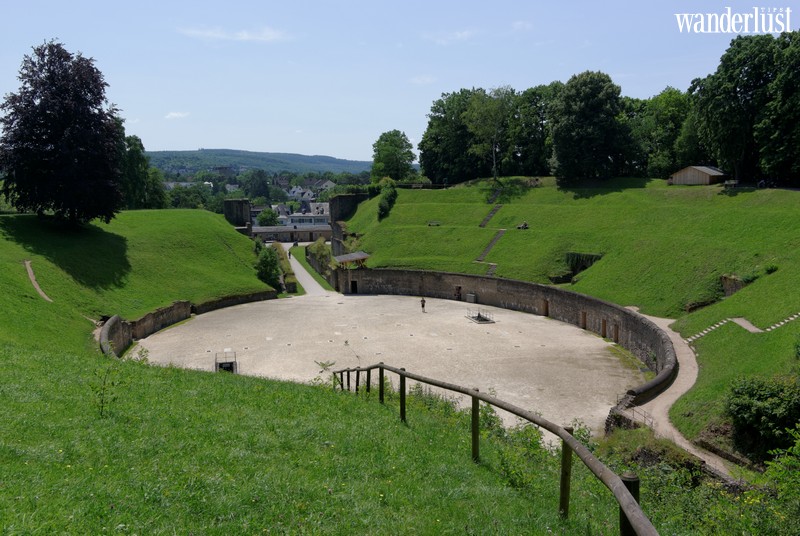 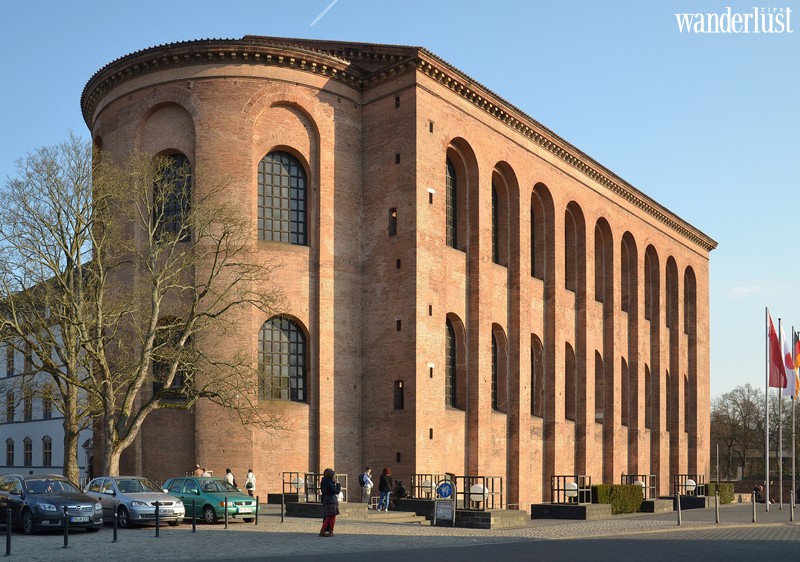 Before converted into the nowadays church, this was the audience hall for Emperor Constantine’s palace when he resided here between 306 to 312AD. When the Roman Empire collapsed, the hall became the resident of Trier’s archbishop, allowing near perfect preservation and various modifications. For a memorable visit, try to come during the classical or choral concert that are frequently held in this ancient venue. 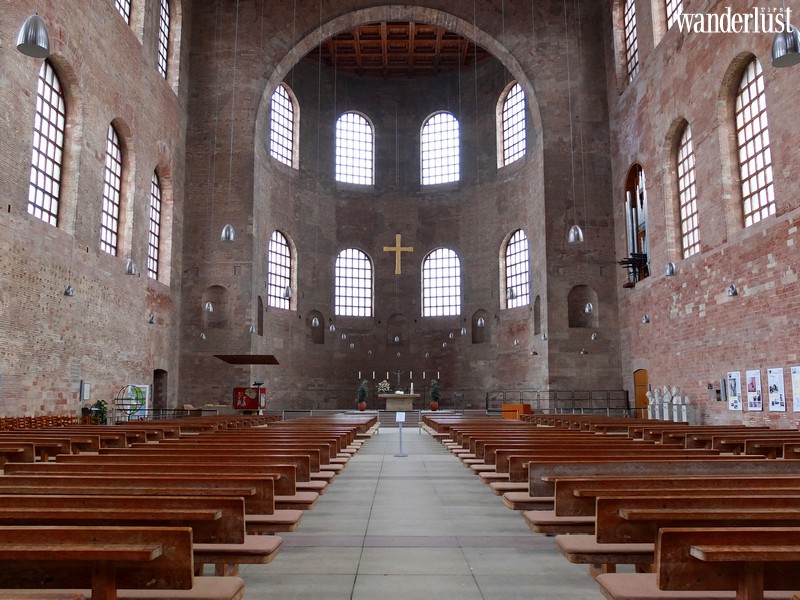 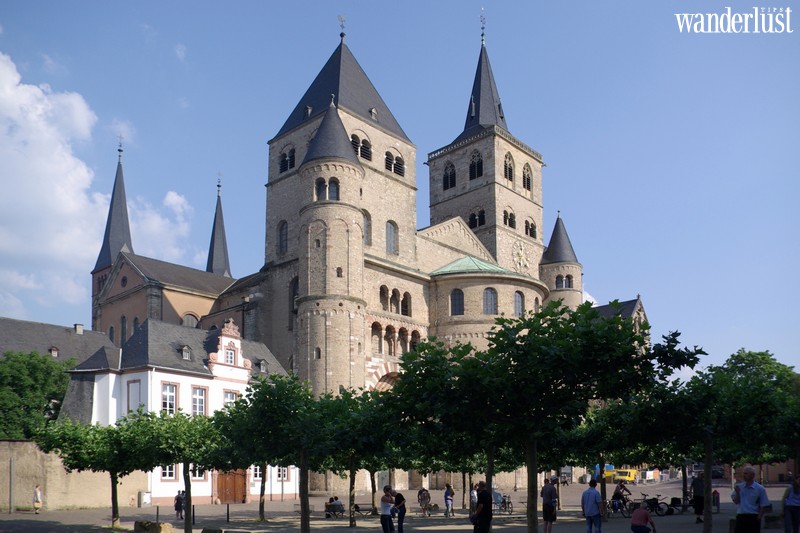 The High Cathedral of Saint Peter, more commonly known as the Cathedral of Trier, was build around the 4th century, making it the oldest church in Germany. The structure seen today was continuously built in the 11th and 12th centuries and fully renovated in 1974. Highlights of the church include a robe reputedly worn by Jesus (the “Holy Tunic”), a tour of the older structure of the church, and the famous choirs that are performed frequently. 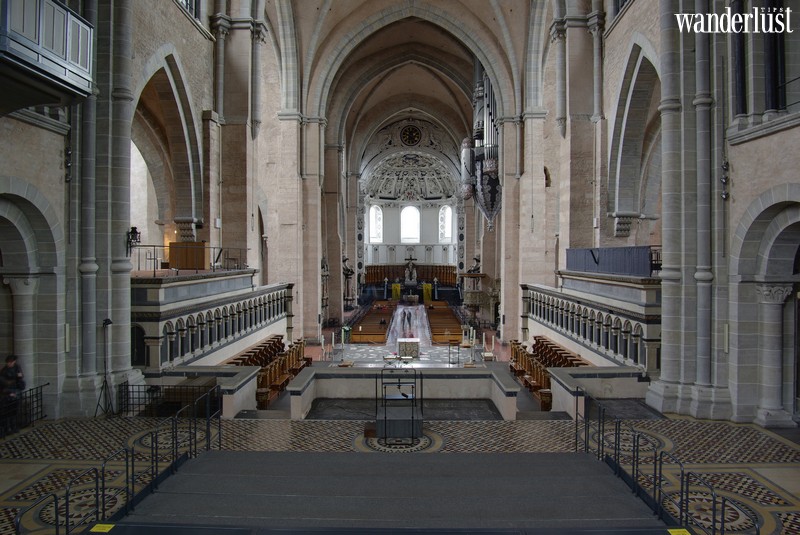 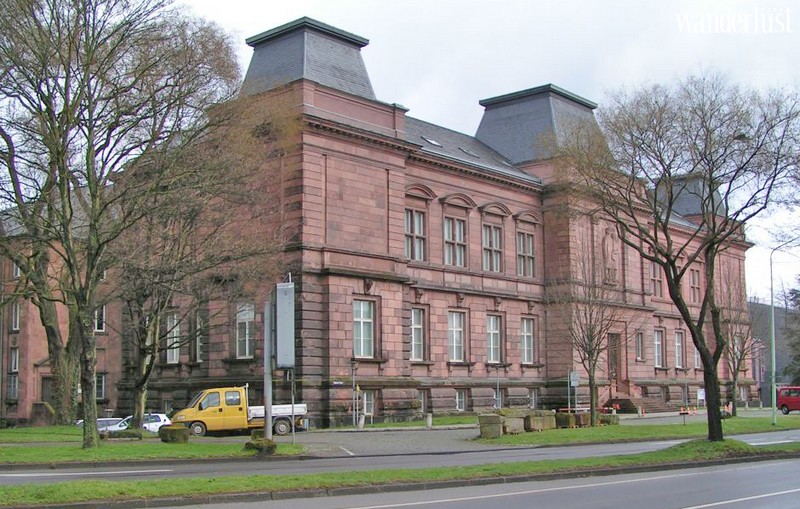 The Rhineland Museum was constructed in 1877, in an attempt to cover 200,000 years of the region’s history. It boasts a collection of over 4,500 artefacts, from pre-historic era to the 19th century, with more artefacts found and brought in frequently. The highlight of the visit is the multi-media show, hosted twice a day, and the huge scale model of Roman-era Trier. 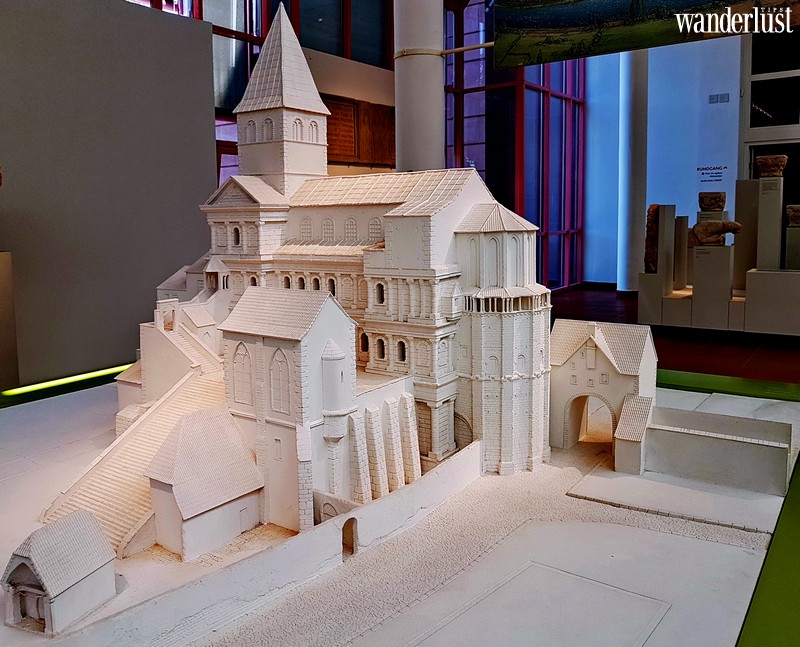 Follow up with the Rhineland Museum is a more specific, Trier-oriented Stadtmuseum Simeonstift Trier. The former monastery of St. Simeon, closely located to the Porta Nigra, contains two well-preserved cloisters dated back to the 11th century. Constructed in 1905 on the ground of the old monastery, the museum features artefacts from Roman times to present day, including rare artworks, paintings and sculptures. 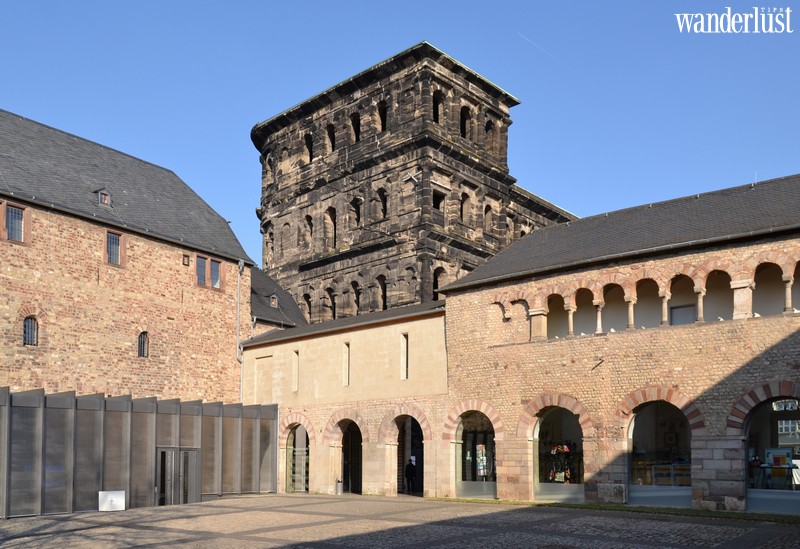 It is not too rare for a government building in Europe to be a historical attraction, but luckily, parts this beautiful late-Baroque building is opened for public tours. Guided tours of the courtyard, foyer, staircases and the “Baroque room” can be purchased, and will guarantee an experience like no other. 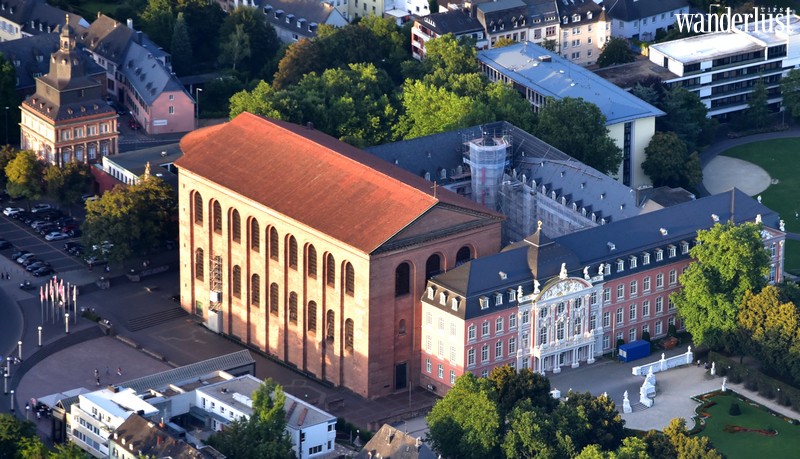 Once the soul of Trier during the medieval era, Hauptmarkt (Market Square) was built in the 10th century and is still used to this day as a market, although to a lesser extend. The market square is a pleasant break after a long sightseeing trip with a stop at a cafe or a small restaurant. 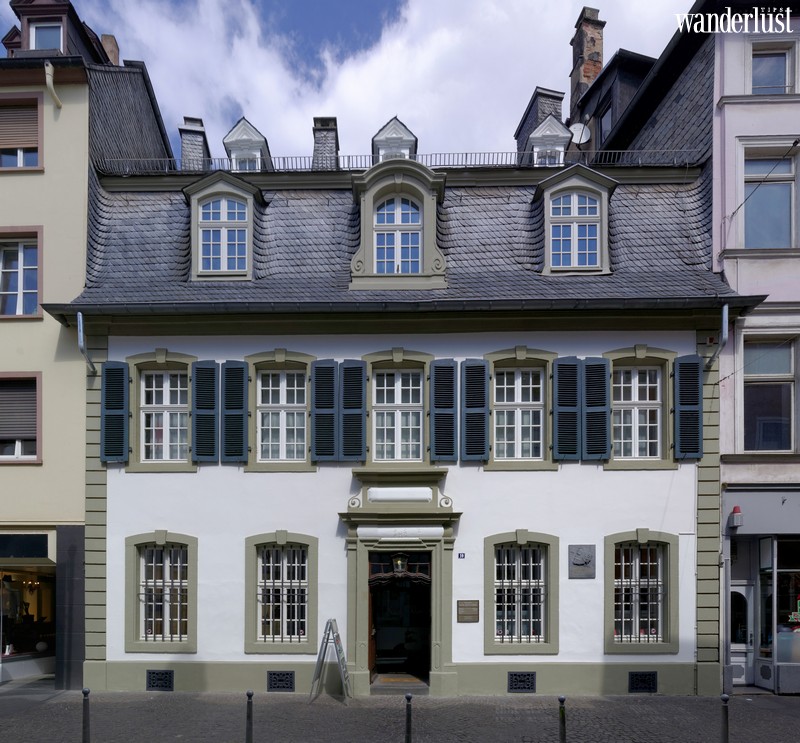 One of the most influential philosopher of all time, Karl Marx, was born in Trier. His house, after his passing, has been used as a museum, outlining his work and the influence of his work around the world. The museum features original letters written by Marx, as well as an armchair, famous for being his chair while he did most of his reading.