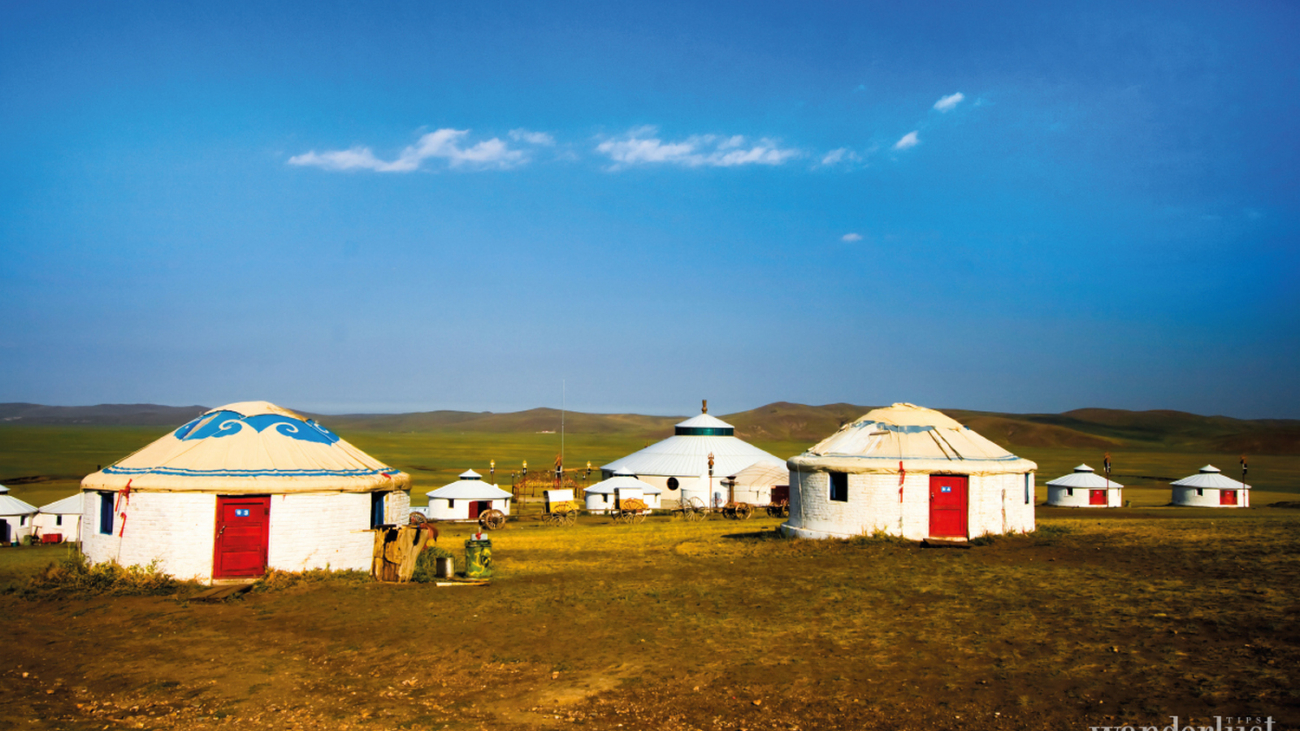 For thousands years, yurt – a portable, round tent covered with skins or felt – has been used as the traditional dwelling of nomadic families in Mongolia. It has travelled with them through their history through war as well as peaceful times.

Yurt (called Ger by the Mongols) is the traditional dwelling of nomadic families in Mongolia. It is considered a basic element in the development of the traditional Mongolian architecture. According to archaeological research, the Yurt originated in Turkey and then was adapted throughout Central Asia. The development of different forms of Yurt represents the ways of life of different nations and races. 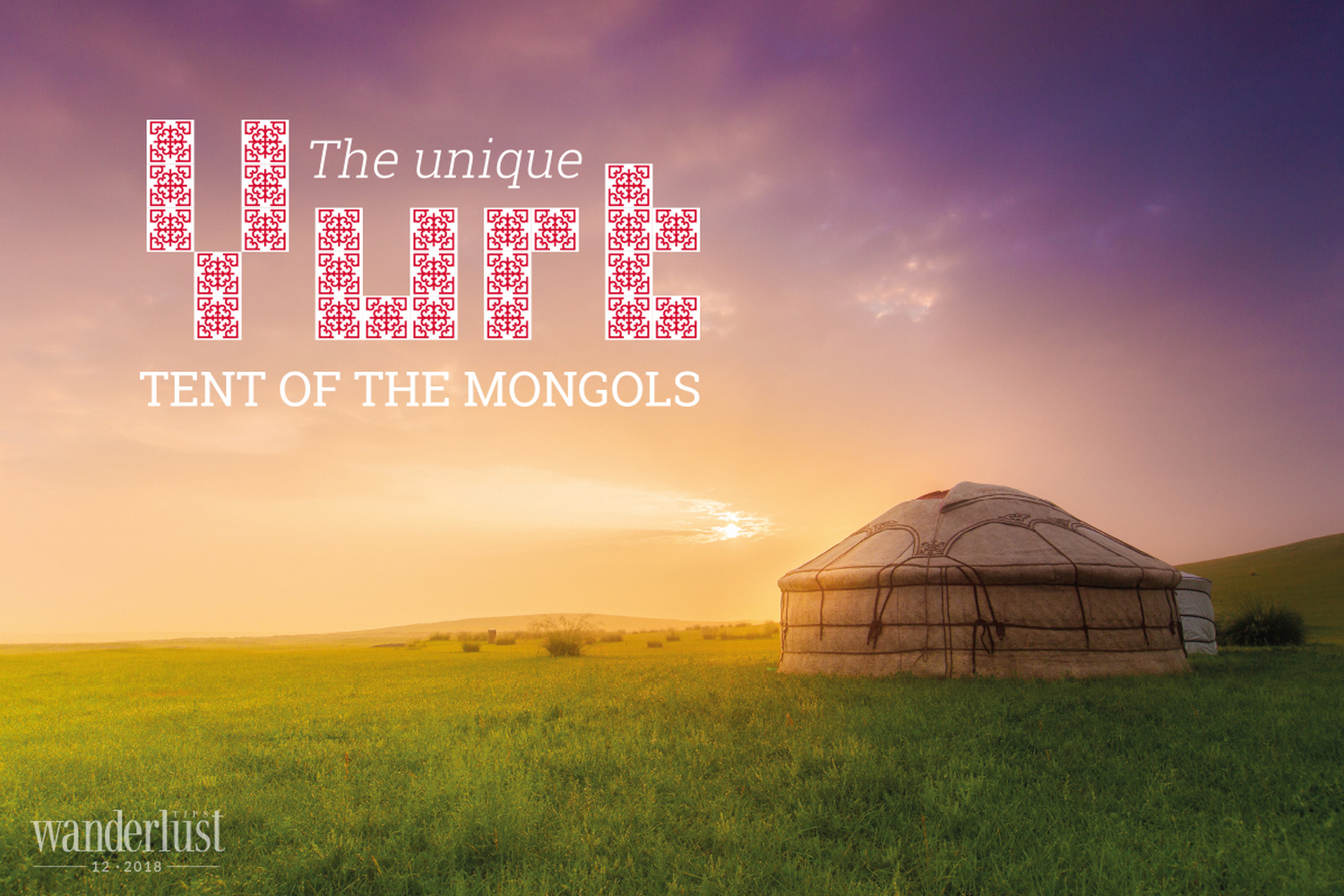 However, the Yurt tent was not the first form of the architecture of Mongolia in ancient times. A lot of archaeological evidence shows the existence of quadrilateral tombs dating back from the 4th-5th century across Central Mongolia has been found. Works built with structural bricks still exist in Mongolia, and are even developed to a certain level.

So what is the origin of the Mongolian Yurt?

During the Mongol Empire, Genghis Khan used his Yurt as the area of central command. On the move, it was mounted on a huge, wheeled cart hauled by oxen. When stationary, it was guarded by his soldiers and cavalry. 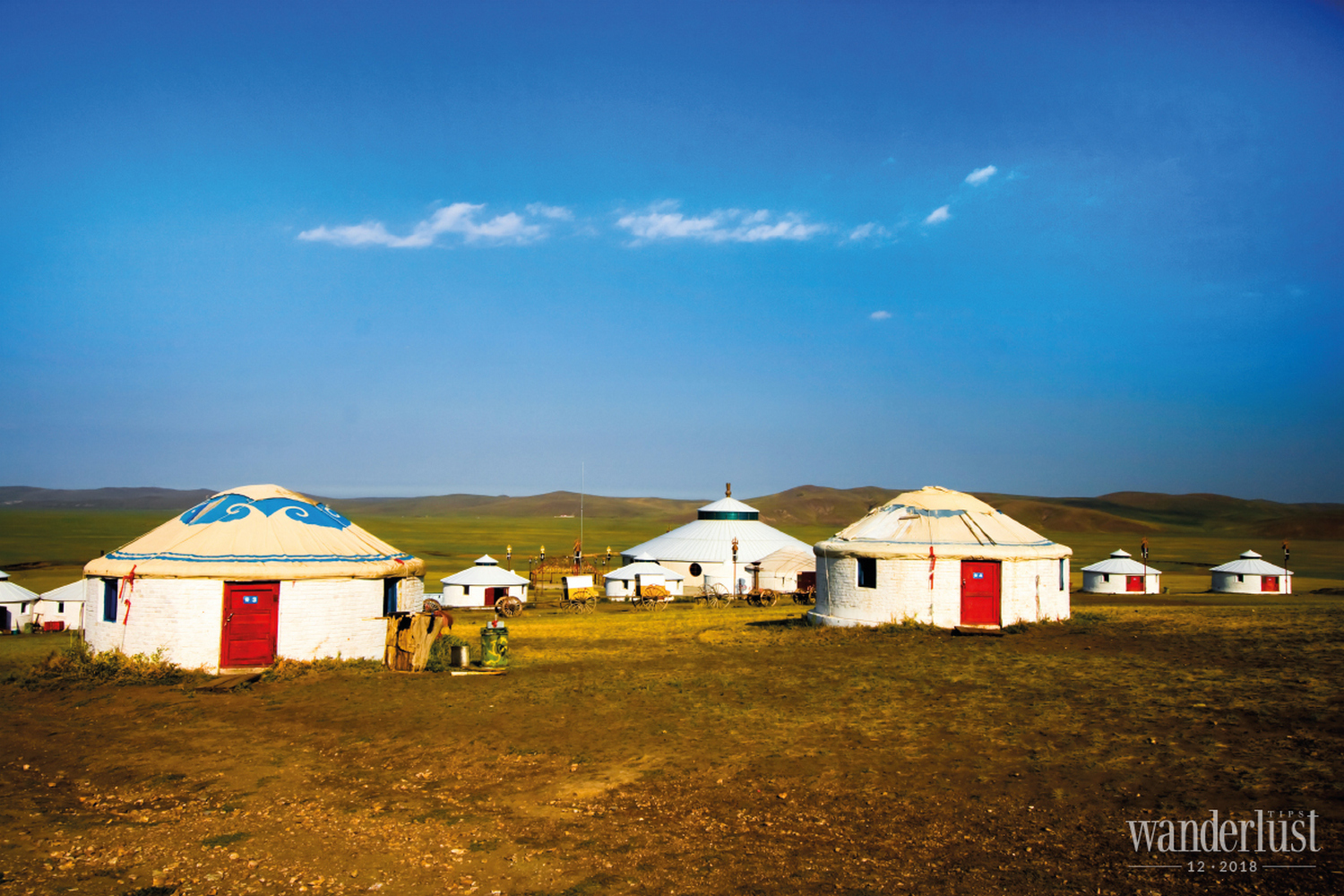 In addition, the Yurt was also used as the living place of the Mongolian nomads. In the 14th century, an Italian merchant, Marco Polo while staying in Mongolia said: “… they have circular houses made of wood and covered with felt, which they carry about with them on four-wheeled wagons wherever they go. For the framework of rods is so neatly and skillfully constructed that it is light to carry. And every time they unfold their house and set it up, the door is always facing south.”

THE UNIQUE STRUCTURE OF YURT

Many Mongolians live as nomads and raise cows in vast steppes. They move seasonally in search of good pasture and water sources for their herds. Therefore, they need a sturdy yet lightweight and movable living structure which is also large enough for many people to live together. 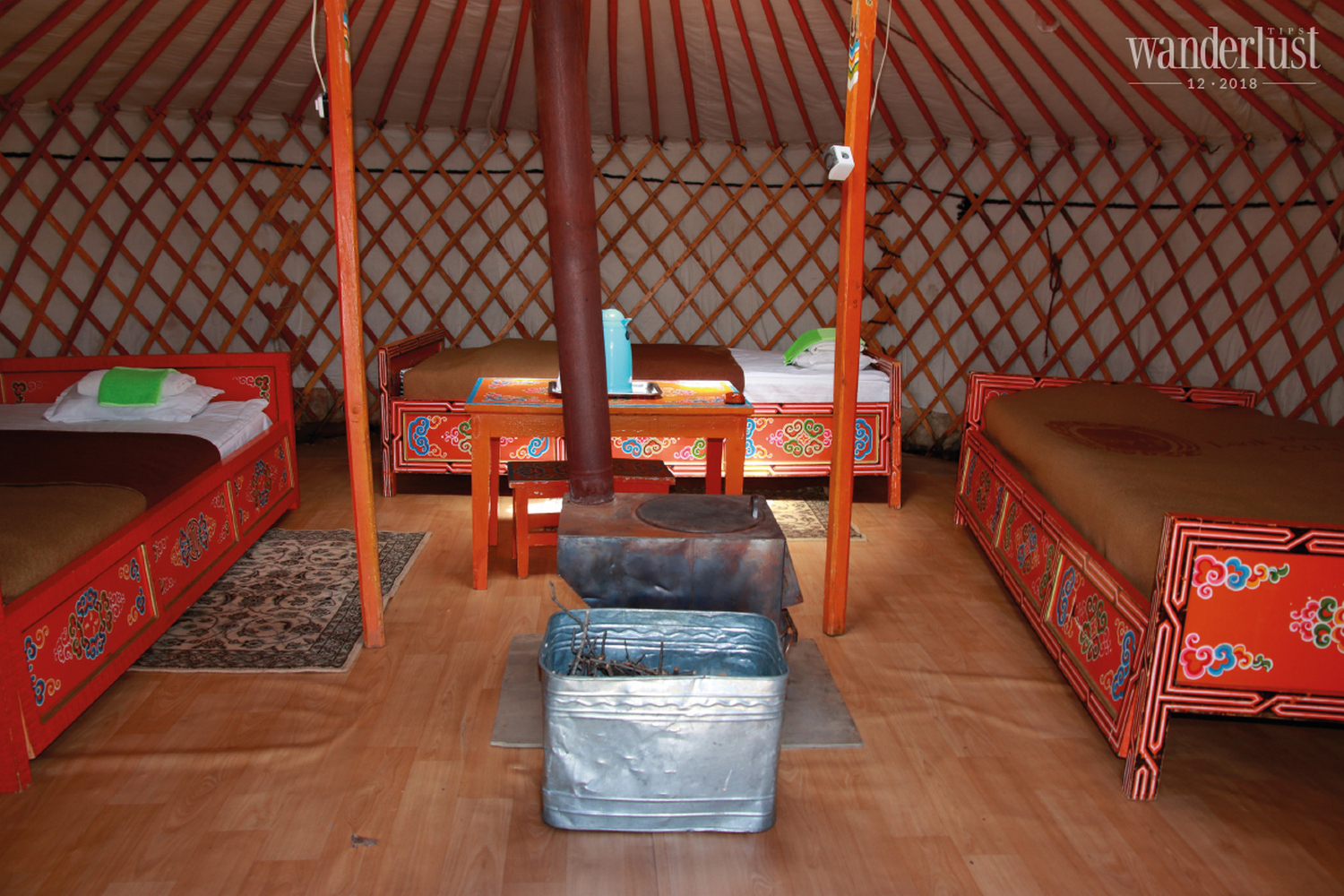 As a result, the Yurt has a simple and compact structure engineered to collapse, pack, and assemble quickly for easy transport by camels or horses. It consists of wooden unfolding wall-sections that are covered with felt and topped with a roof. The lattice of a traditional yurt is divided into sections, called khana. The crown is a ring to which roof poles, called uni, are attached. The circular ceiling window formed by the crown is called the toono, and there are columns to support the heavy crown. Most yurts have three layers. The first layer is a decorative white cotton cover that is fitted to the outside of the roof and walls. The second layer is often made of thick cloth from goatskin or sheepskin, its thickness depends on the weather of each season. The third layer is the waterproof layer made of white thick canvas, covering the roof and the walls.

Contrary to the simple exterior, the inside of the yurt is beautifully decorated. Men are assigned to set up the tent, while women are responsible for decorations. Depending on the financial conditions and preference of each family, the interior decorations will be different. However, most of the objects are derived from sacred symbols in Mongolia. The most common ones are symbols that represent the power of Four Holy Beasts of the Mongolians (Lion, tiger, graduga Bird Gods, and dragon). In addition, the decoration style is inspired by the Five Elements (Wood, Fire, Earth, Metal, and Water). The local people here believe that these are the five basic elements of the universe which grant them the power to protect their family. 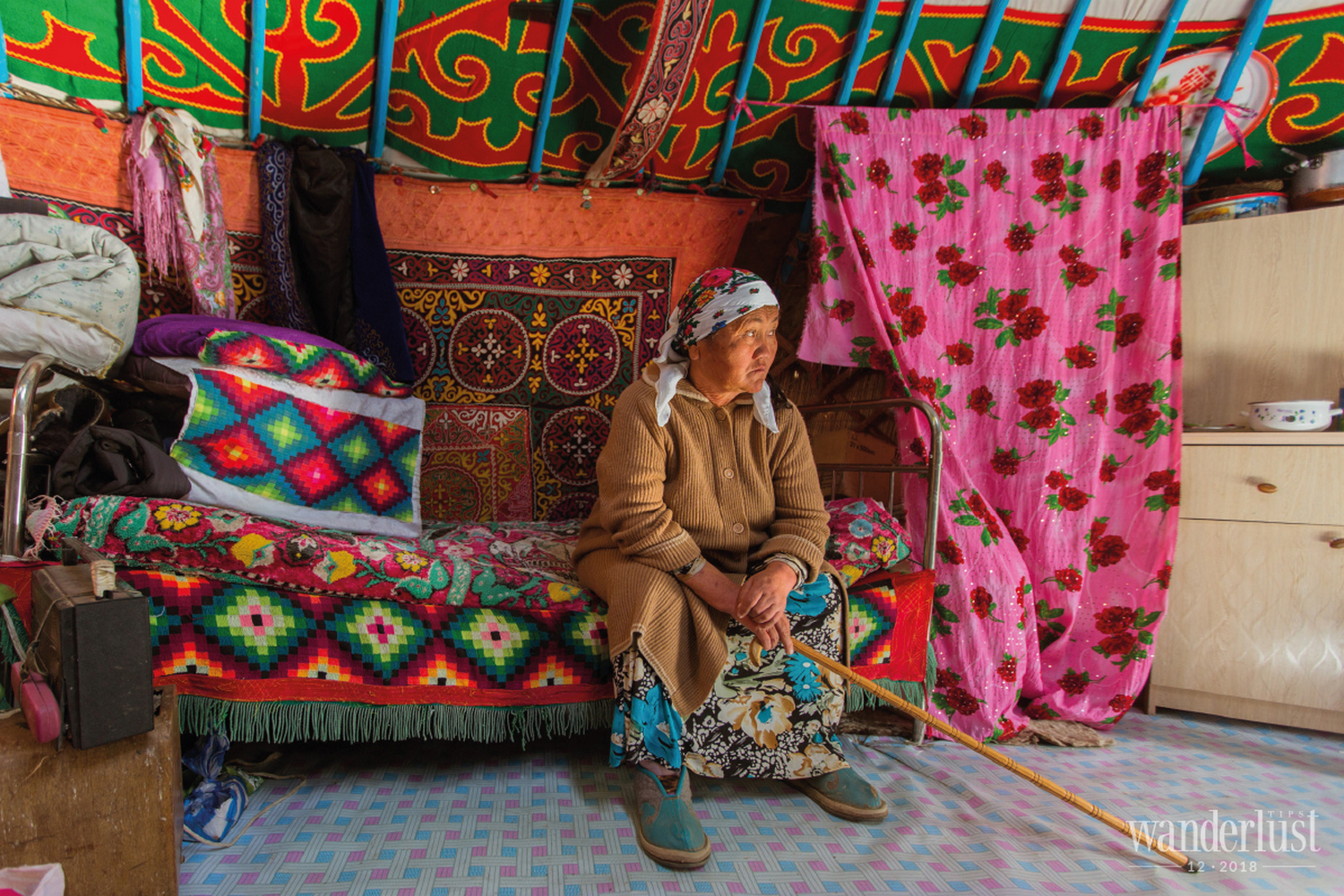 Apart from symbols associated with nature, religious decorations are also very popular in Yurt decor. Since the 16th and 17th century, Buddhism has become one of the major religions in Mongolia. Toono is said to have the shape of the Wheel of Reincarnation, as it has 2 concentric circles and eight axes in the middle.

Regarding the colours of the interior, furniture is decorated with eye-catching colours such as red, orange, blue, and green; the most common being red. Red symbolizes great power; it is the sun that represents the bright red colour. Yellow symbolizes light, blue is the colour of a large river, and green is for vast grasslands.

In Mongolia, depending on the season, people may not use wooden panels to make the floor but directly set up Yurt on the ground or grass platform, then use large leather panels to cover the platform. The Mongolians believe that directing South brings good fortune, so the doors of their houses often face South.

Although the frame and cover is not as sturdy as in a brick house, Yurt is still resilient enough for people to stay in. Thanks to the design which skillfully distributes weight evenly around the structure, it can naturally disperse any stress received down to the ground. The ends of khana are attached to the door, creating a circle to distribute the weight. The outer canvas is also tightened to the frame so that the wind cannot enter the tent. In addition, the round shape of the yurt makes the wind go around and above, while the air hole on the roof and low shape help the Yurt stay grounded. All of these features help the Yurt stand firmly amidst the vast grassland despite strong winds. 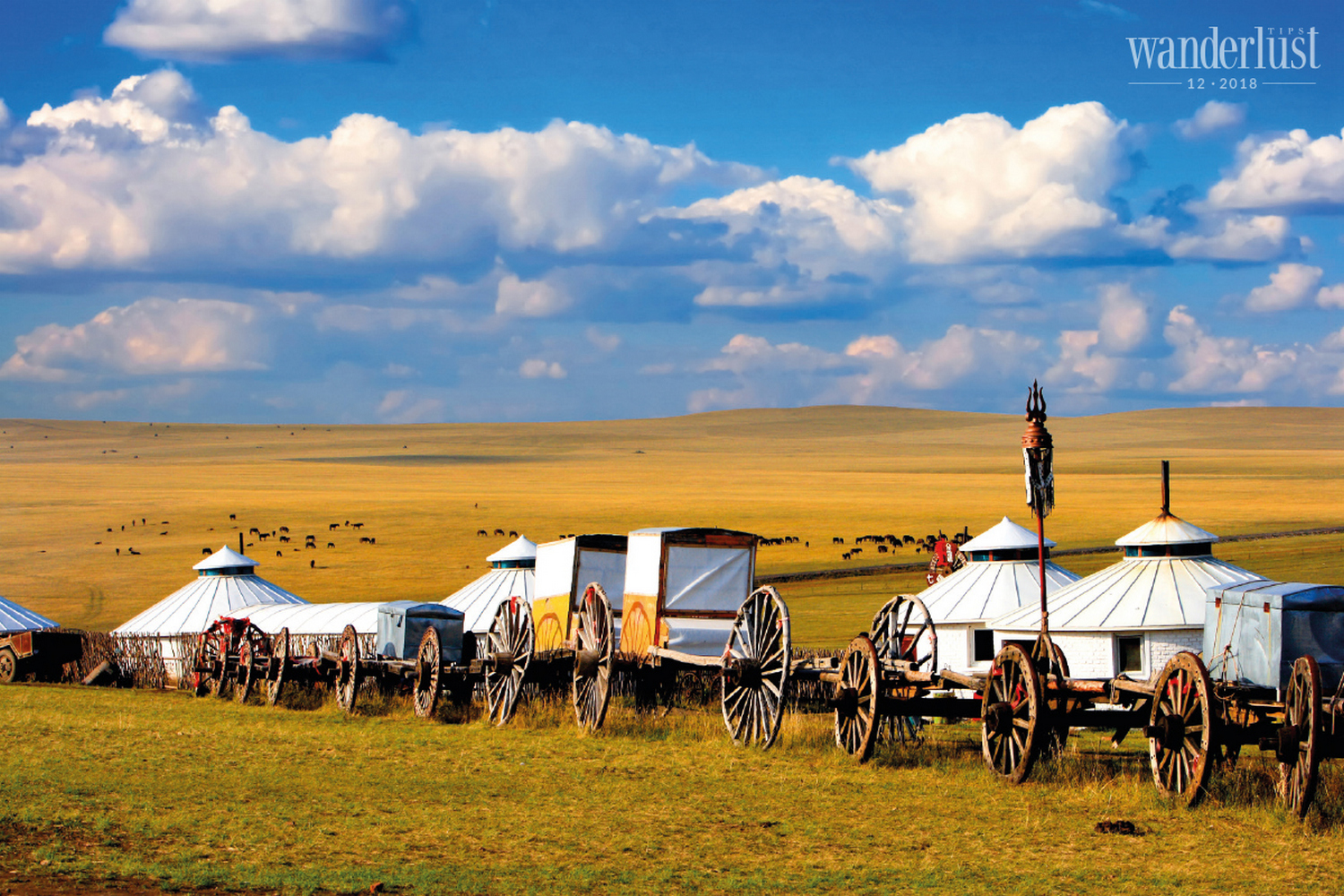 The temperatures in Mongolia are very harsh, especially in the winter. Therefore, keeping warm is extremely important. However, it is not easy to keep the yurt warm yet not stuffy inside. Yurts have been optimized to comply to both these requirements. The outside air can enter the yurt through the door or small gaps at the foot of the yurt. Meanwhile, there is a fireplace inside to keep the air at the right temperature. When entering the yurt, the cold air outside meets the hot air from inside, then escapes through the toono, merge with the cold northern wind and blow to the south. This cycle is repeated, making the atmosphere inside the yurt warm and comfortable yet not stuffy.

Though the Yurt has only one door and one air hole, light is still sufficiently provided to meet living needs. When staying in the Yurt, people can still identify the time of the day thanks to the movement of light in the Yurt. For example, in the middle of the day, the light will fall on the alter which is placed to face north. At night, the light source is provided by the fireplace or the stove. Today, Mongolian people use solar cells which collect natural light, providing electricity to the family.

DAILY LIFE OF THE MONGOLIANS ASSOCIATED WITH THE YURT

For the Mongolians, the Yurt is not only a place to live but also a symbol for the close bond between Mongolian people and the harsh nature here, demonstrating their spiritual belief and awareness of the universe. The roof represents the sky with an open circular hole named “toon” at its centre which symbolizes the sun. The fireplace in the centre of the yurt represents five elements of the universe. Therefore, the Mongolians believe that the fire is their god. That is why they do not burn garbage on the fire, and strangers are not allowed to take fire directly from the fireplace.

Yurts are often divided into four different spaces, including the altar and 3 other areas for the men, women, and the “poor”. The altar always faces the door, also known as khoimer. This space is used not only to worship but also to keep items of religious value or pictures of relatives and friends. Honoured guests are invited to sit in the area of khoimer. When sleeping, every member of the family goes to the north chamber of the yurt to express their respect to the ancestors. The centre of the yurt is a fireplace, a stove, or a low table to welcome guests. The West space is for men, male travellers, and honoured guests. It is also the place where men keep their belongings such as saddles or hunting tools. Women and children use the space in the east. This is also a place to keep rugs, food, crockery, water, and other stuff. The space near the entrance is for civil servants, poor visitors, and sick or young animals. 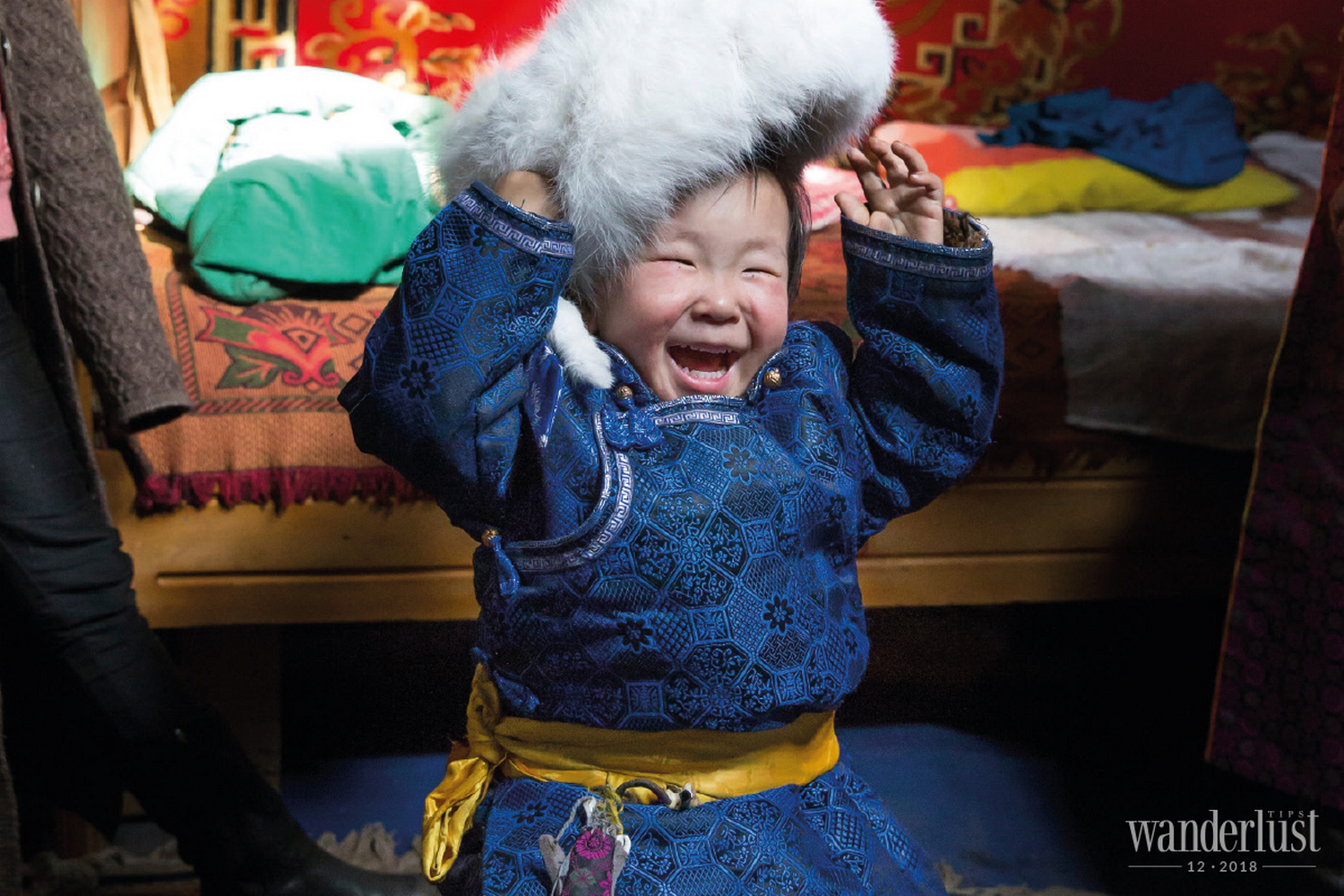 Each Yurt can accommodate a three-generation family, symbolizing the sense of community and unity of the Mongolians. However, newlyweds will be given a private yurt by the bride’s parents; it is often located near the large Yurt of the family. When winter comes, blood-related families often gather and form a group of yurts linked together, with all doors facing south.

One downside of the Yurt is the limitation of personal space and daily needs, especially with regard to water. The water in the grassland is usually transported by horses or camels to stock in the Yurt. Therefore, using water effectively is an imperative requirement when living in a Yurt. The Mongolians rarely drink water; instead, they drink traditional goat’s milk and alcohol.

The Mongolians are very hospitable; they are willing to welcome any visitors. However, when entering Yurt, there are some rules that guests should adhere to and take note of before entering or visiting a yurt. All weapons must be left outside. People are not allowed to do any of these activities: step on the doorstep or cling to the string at the door, turn their feet to the fireplace, burn garbage on the fireplace, sit with their back to the altar, or point a knife at anyone. You cannot walk where elders are facing towards.

Mongolia is one of the few remaining nomadic nations in the world today. In the process of their history, the Mongolians have gradually improved the structure of their yurts to suit the harsh living conditions of the steppes. In particular,

the architecture of the Yurt is often used for Glamping, a combination of luxury and comfortable camping style with luxury facilities, which are popular to many visitors.