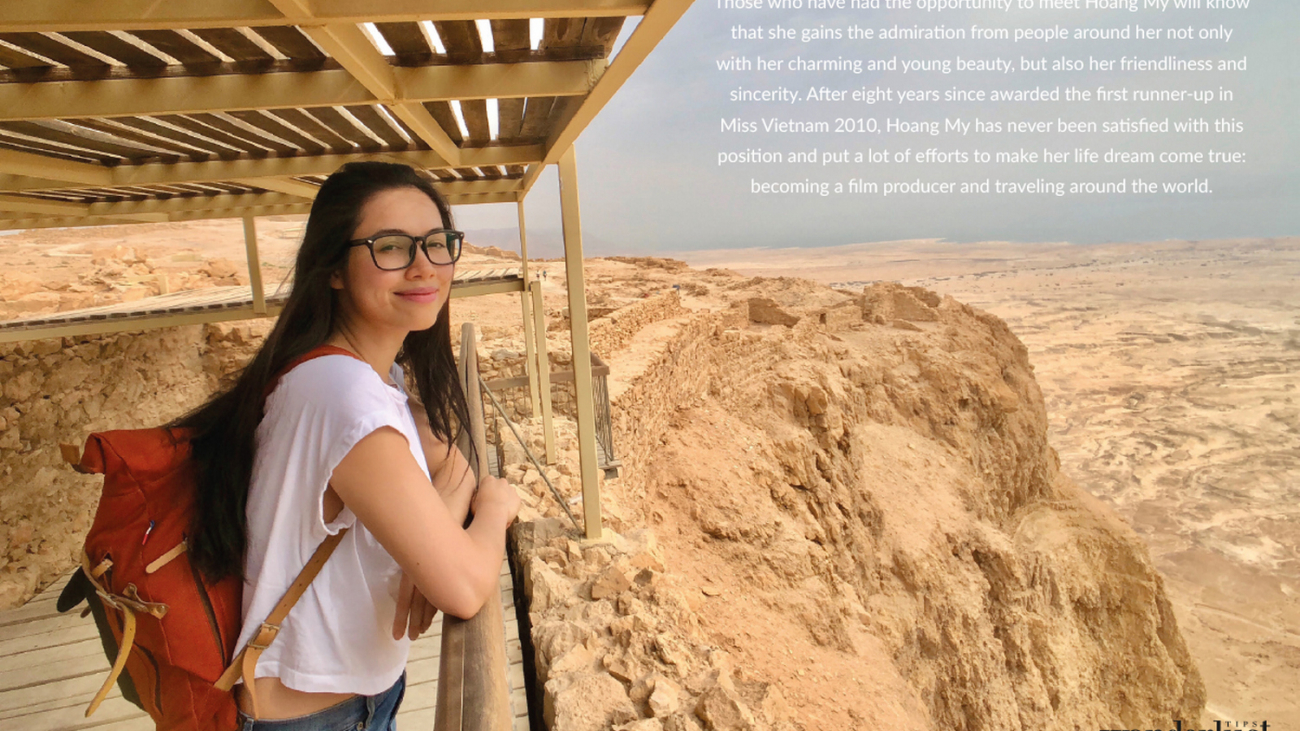 Those who have had the opportunity to meet Hoang My will know that she gains admiration from people around her not only with her charming and young beauty but also her friendliness and sincerity. After eight years since being awarded the first runner-up in Miss Vietnam 2010, Hoang My has never been satisfied with this position and put a lot of effort to make her life dream come true: becoming a film producer and travel the world.

After being awarded in Miss Vietnam 2010, you did not continue to pursue an artistic career but decided to study abroad. Why did you make this decision?

After the contest, I represented Vietnam in two international contests, which were Miss Universe 2011 and Miss World 2012. At that time, I was satisfied with the experiences I gained as a runner-up, and I did not intend to live forever with this title. I wanted to embark on the big project of my life, which I had been dreaming of before I took part in Miss Vietnam 2010. I wished to become a film producer and go on an adventure around the world. The contest was just the first step of my plan, studying abroad was the second, and exploring the world will be the third step. Then I have other plans to accomplish in the journey of my life.

Regarding your dream of travel the world, what have you done to achieve it?

I have traveled all over Vietnam for work. I intend to start another trip as a backpacker to gain a different perspective on life after I have had the experiences and contemplation of the world. As for trips abroad, I have been to more than 20 countries, and I intend to travel the world.

Among the countries you have been to, which one do you love the most?

The place where I am working on the project “The secret of Jewish Wisdom” is also the country I love the most, which is Israel. Here, my viewpoint which used to be influenced by the media has changed a lot from what I have seen. For example, Jewish and Arabs are known to have serious conflicts, but there are cities like Haifa, Acre, and Jaffa where people live in harmony. They have great differences in their way of life, but they also have some great things in common.

When I first arrived in Israel, I still did not have a complete understanding of the culture and people. While walking in a park in Tel Aviv, a Jewish boy in front of me fell off his bicycle. His father who biked next to him just stopped and stood there looking. Subconsciously, I hurried to help the boy. Suddenly his father said, “Let him do it himself”, I was very surprised. Since then, I became more aware of how the Jewish teach their children and try to keep calm when I see them fall down. A few days ago, a similar incident occurred when I arrived in Acre – an ancient port city of Israel, home to many Arabs. An Arab boy slipped down the stairs of the ancient wall. The baby was crying while his mother was carrying a lot of things. I was the one who was closest to them, but I was quite hesitant as I did not know whether I should help this little boy. As the boy cried so desperately, I finally decided to raise him up. After that, I felt like I had done something wrong, so I embarrassedly looked up to see his mother, father, aunt, and grandmother who was running to assist him. But they smiled and looked at me with gratefulness, they asked where I came from and asked me to take a picture with them, then they hugged and kissed me on the cheek to express their gratitude. Everything that happened at that time really surprised me. Though the Jews and Arabs live close together, their ways of life are so different.

However, there are similarities between the two, for example, they like to invite me to come to their houses to have meals. One day while wandering in Habima Square in Tel Aviv, I saw a group of Arabs singing under a tree. I approached and they started talking to me. When we finished the conversation, they invited me to visit their home and have a meal when I had time. I found it strange that they invited a stranger for a meal in their house. Another day, I was very hungry after the long journey from Nazareth to Tel Aviv. When walking through a park and smelling a very fragrant barbecue, I approached and saw a Jewish elderly woman barbecuing with two men, they looked very happy. “The roasted chicken smells so good, can I buy some?” They laughed and said, “Of course!” They immediately made me a baked pita with cucumber. But when I asked to pay, the woman replied gently: “God blessed me and gave me food, so I want to share with everyone. We only give, don’t sell.” I suddenly felt a surge of happiness; Israeli people are so kind and friendly, and they are much more gentle than I imagined.

What I witness, the people I meet every day have gradually changed my view of the world.

Do you more frequently discover new lands alone or with someone else?

Mostly I travel alone. Maybe no one is as crazy as me to spend time just wandering around, so most of the time I go alone. The first countries I visited as a backpackers were Singapore and England. Traveling alone, I discovered Singapore on foot, wandered through London, and walked to Stonehenge. At that time, I was quite hesitant to talk and make new friends. But later on, I became a real backpacker on the journey of exploring Israel. People in Israel were really friendly and funny, which made me feel more comfortable. The new friends I made on every journey traveled with me, took care of me, and loved me as if I was a part of them.

Could you share some of your solo travel experiences with our beloved readers in general and women in particular?

Besides basic considerations such as trying to improve foreign languages, preparing convenient luggage, always taking your mobile phone, using apps, and avoiding bringing too much cash, I also want to share some more experiences with ladies in particular. You must be very straightforward and clear when a man wants to get close to you, or even get aggressive if necessary. It is recommended to be as modest as possible, and avoid using seduction, beauty, and charm, as this could get you in dangerous situations. For self-defense in bad situations, it is recommended to learn martial arts, otherwise, run away as quickly as you can. You should choose civilized and safe destinations like Singapore and Japan. However, even in civilized countries, traveling alone in the middle of the night or in deserted places is always dangerous. Finally, be friendly with everyone, but be aware and learn to judge people.

For women, skin is deeply associated with age. However, traveling can cause damage to the skin as it is affected by sunlight, the environment, schedule, and diet. As a person who often travels, can you share your secrets on how to keep your skin healthy?

I used to be lazy in taking care of my skin during trips to the mountain and the desert, I only used sunscreen. And I found out my skin became more beautiful than the days I was in the role of the first runner-up. The thing that damaged my skin the most was actually make-up, followed by lack of sleep. The third reason is health issues with regards to hormone imbalances, the fourth is a strict diet, and the fifth is intense sun rays. So I always maintain clean skin, apply a deep cleansing mask after wearing makeup, moisturize, and often use sunscreen. I also try to get enough sleep and maintain a balanced diet that includes protein, fiber, vitamins, minerals, and functional foods when it is necessary. In order to reduce stress and fatigue, I try not to read nonsense information, and sometimes try to keep the clarity of mind so that I can relax and be happy.

Thank you for sharing your interesting information with Wanderlust Tips. We wish you always stay passionate in order to achieve all your life dream.