Sometimes i wonder whether what i have admired and experienced is a dream? The rows of tiled roof houses along the Tuojiang river, cobbled streets in the bright sunbeam throughout the town. The noise of crowds when the mantle of darkness is let down on earth or the quiet peace every morning. The singing of the boatmen on the river was warm yet powerful and courageous. Have i been awakened from a dream of Phoenix Ancient Town?

A JOURNEY OF SADNESS 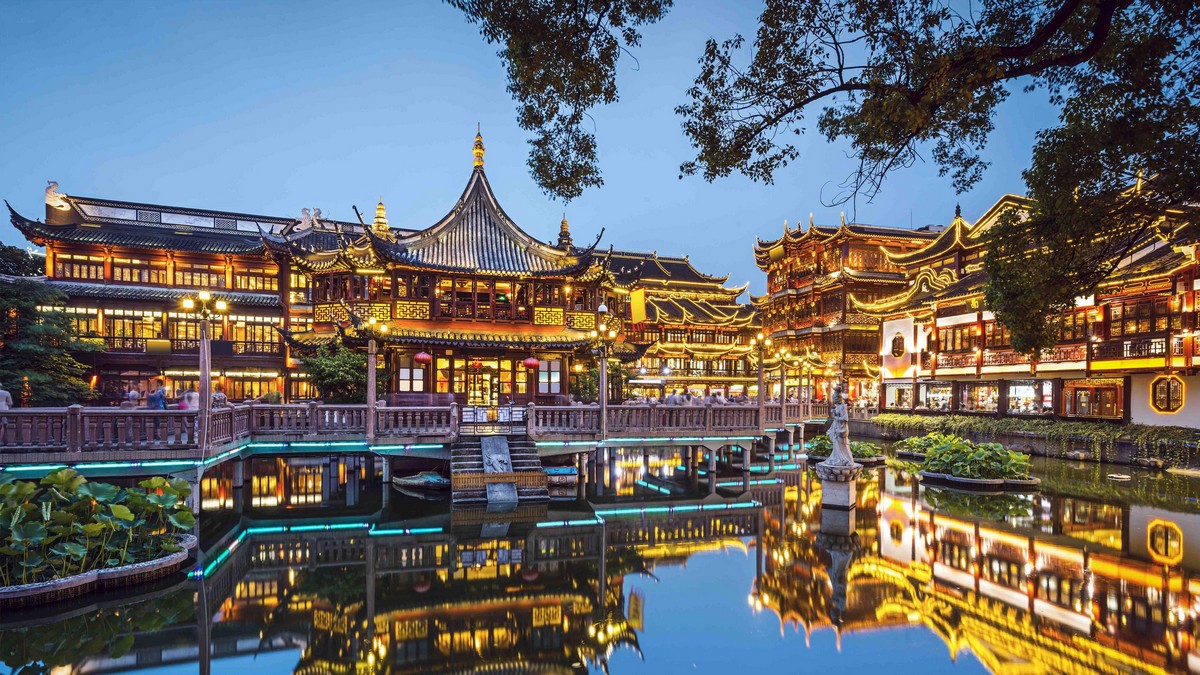 Phoenix Acient Town has a history of 1,300 years and is located in the Autonomous Prefectures of the Tujia people and Xiangxi Tujia and Miao in Hunan Province in China. I arrived here on a summer evening in the middle of August. The weather in Phoenix was pretty cool. In the midst of the modern houses, Phoenix Ancient Town gradually appeared with shimmering lights around the houses and an ancient bridge. I eagerly pulled my suitcase on the rugged stone streets.

But when coming into the town, the excited feeling I imagined having on my first visit suddenly disappeared. I was shocked by a sense of loss while my eyes were still looking for a quiet mossy roof and the poetic Tuojiang River I always dreamed of. Instead, welcoming me was a noisy old town and brilliant lights.

It was 11p.m but the streets were still crowded and there were shops everywhere, and many buyers. Even in small alleys, the crowd of people caused traffic jams. By the riverbanks, the bars were open and played all kinds of different music. Perhaps a person who enjoys peace and nostalgia like me feels quite disappointed with this commercialisation.

Although the peak tourist season was over, I know that until November the town is still crowded because the weather is cool and pleasant. If the cold of the North does not bother you, you can go in late winter or early spring, when the last snowflakes are melting away on the branches and you can enjoy a more quiet time in Phoenix Ancient Town.

THE SOUL OF PHOENIX ANCIENT TOWN 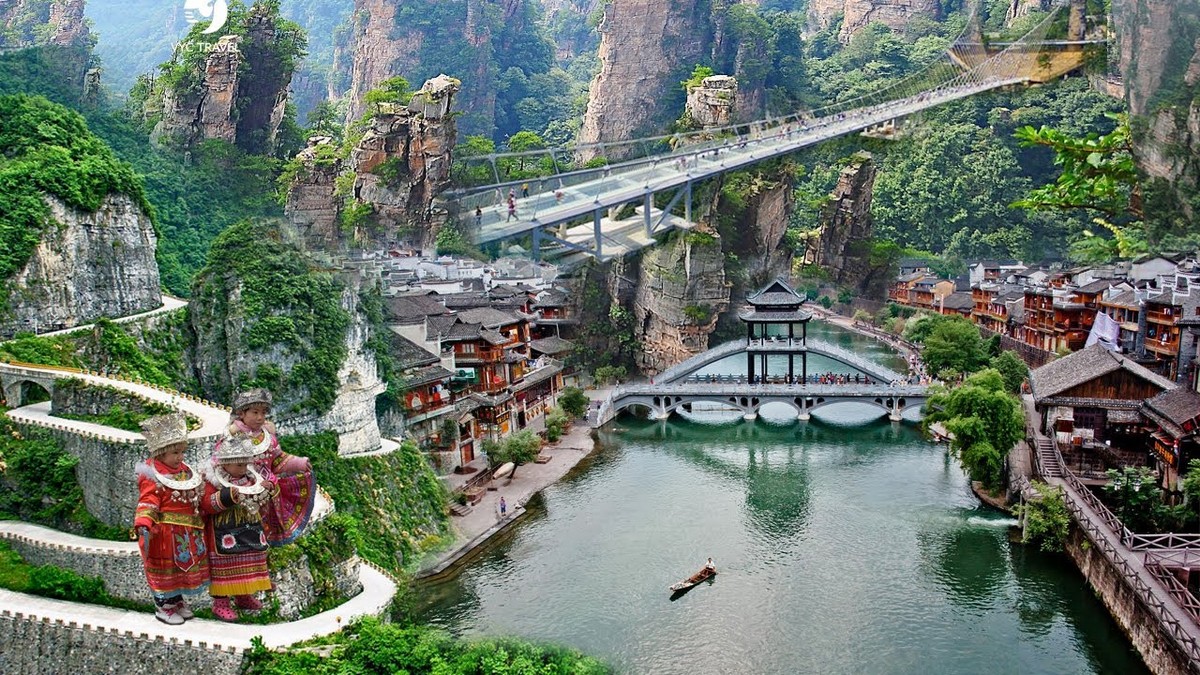 Near where I stayed, there was a market and it was bustling. The market sold all kinds of fruit and the local breakfast, so it was quite convenient. Crossing the market, I saw the ancient roofs, two-storey wooden houses, curved roofs and beautiful and ancient carved windows. If this town was full of music at night, it was more peaceful in the morning when many shops had not opened yet. Tuojiang River was still drifting along and people travelled mainly on the two sides of the river, just talking while sightseeing and I took a lazy stroll.

I heaved a sigh of relief; perhaps this was the atmosphere I longed for after travelling more than 1.500 km and a little disappointment at the beginning.Once considered an important cita del, Phoenix Ancient Town has experienced many historic events, ethnic conflicts and became a mixed cultural citadel between the Han Chinese and the Miao. The architectural style of Phoenix Ancient Town is prominently evident in the siheyuan and houses or large bridges in the town, especially the Hongjiao Bridge. Hongjiao Bridge is located at the centre of the town, built in 1615 and it looks like a large house including two floors crossing Tuojiang River. The bridge columns remain intact from the Ming dynasty with engraved patterns. The ancient roof is covered with yin-yang tiles and has curved corners.

From here, the bridge divides the whole town into two parts: the old town and the new town. The old town has many architectural monuments preserved from the Ming dynasty. The new town has an ancient style of architecture, but the buildings are more modern, most of them are cafés and bars along the Tuojiang River.

Going deeper into the town to a wall made of red sand, there are many shops close to each other selling countless items: sparkling silver jewellery of the Mia people, fragrant wine bottles of the Han people, Tujia’s beautiful lanterns and typical dishes. Nearby, there are street vendors with heavy fruit baskets giving offers to visitors.

The smell of fermented tofu mixed with the smell of pastry spreading all over the streets creates a strange mixture of scents. The sound of hammers in a peanut candy shop mixes with the melodious singing from a nearby drum shop. Then in a corner, a salesman reads a poem with steady rhythm to introduce the famous noodles of the restaurant and though I did not understand its content in Chinese, the rhythm and expression of the young man made me laugh. Such images, sounds and tastes carved into my mind a distinctive yet peaceful memory of the Ancient Town.

WHERE THE TIME GETS TRAPPED 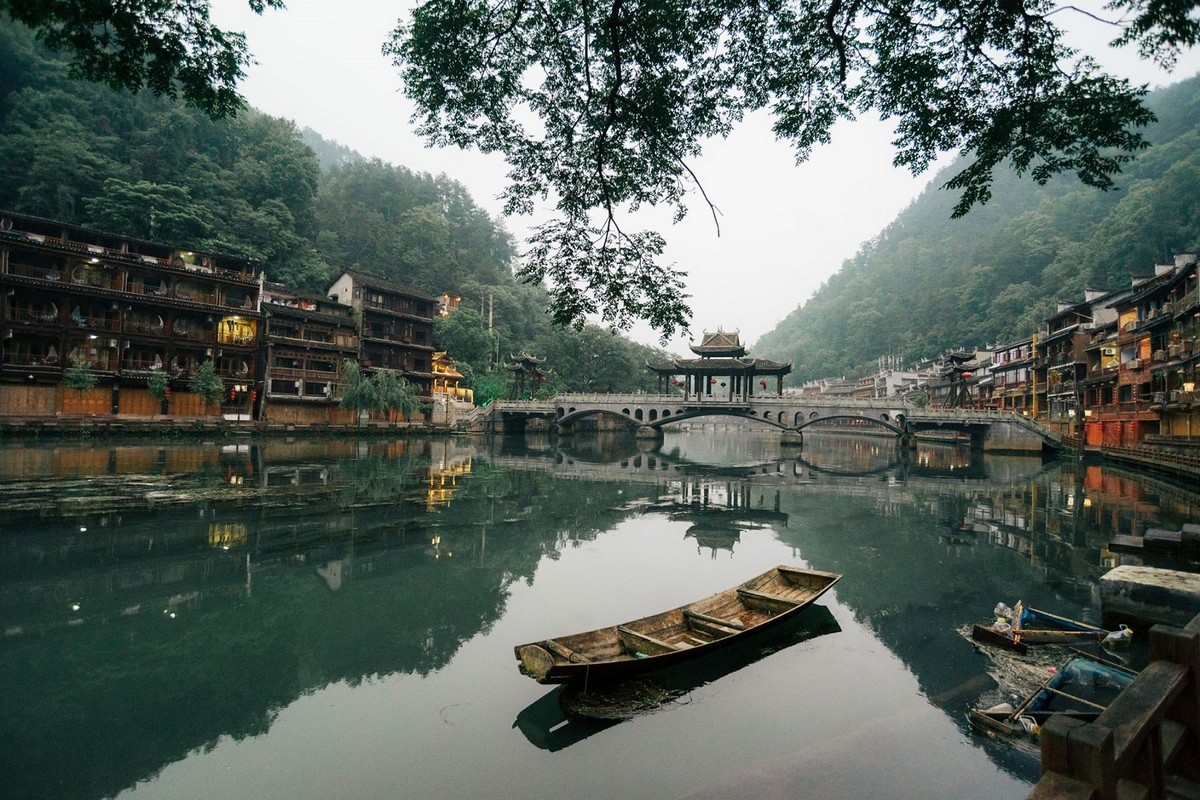 Just occasionally turn into an alley and you will find an extremely quiet atmosphere. Different from all the excitement in the centre of town, the homestays are pretty quiet and some tourists sleep in. In another alley, there are small cafés with countless wind chimes, wooden furniture and colourful decorations. Every house also has a small courtyard with green bonsais at the entrance.

Going to the end of the town, climbing up the soaring steps, I felt like I got lost in a distant place completely separated from the modern world. Here, there were only elderly people practicing Tai Chi and they concentrated on the exercises of breathing and performed beautiful movements.

From here, the whole charming scenery of the town is in full view. Buildings, siheyuans and temples with yin and yang roofs one after the other and surrounding the town are majestic green mountains, the ancient buildings reflected on Tuojang flows through the city creating a poetic and passionate setting.

It turns out that people all have their own reasons to fall in love and want to return to Phoenix Ancient Town. You can find both noisy and gaudy places and peaceful ones, it’s like getting lost in the endless cycle of time. Equip yourself with a special map made of rough antique paper and you will have full details about the road and the best attractions in town.

If time permits, you can explore Miao Village to better understand the cultural life of the Miao. Miao Village is an old village 30-40 minutes by bus from Phoenix Ancient Town. Come here and you will be sailing on the green Chiyou Lake, passing over the hills and mountains to the Tiaoyue Cave’s entrance, listening to the singing of the Miao children. 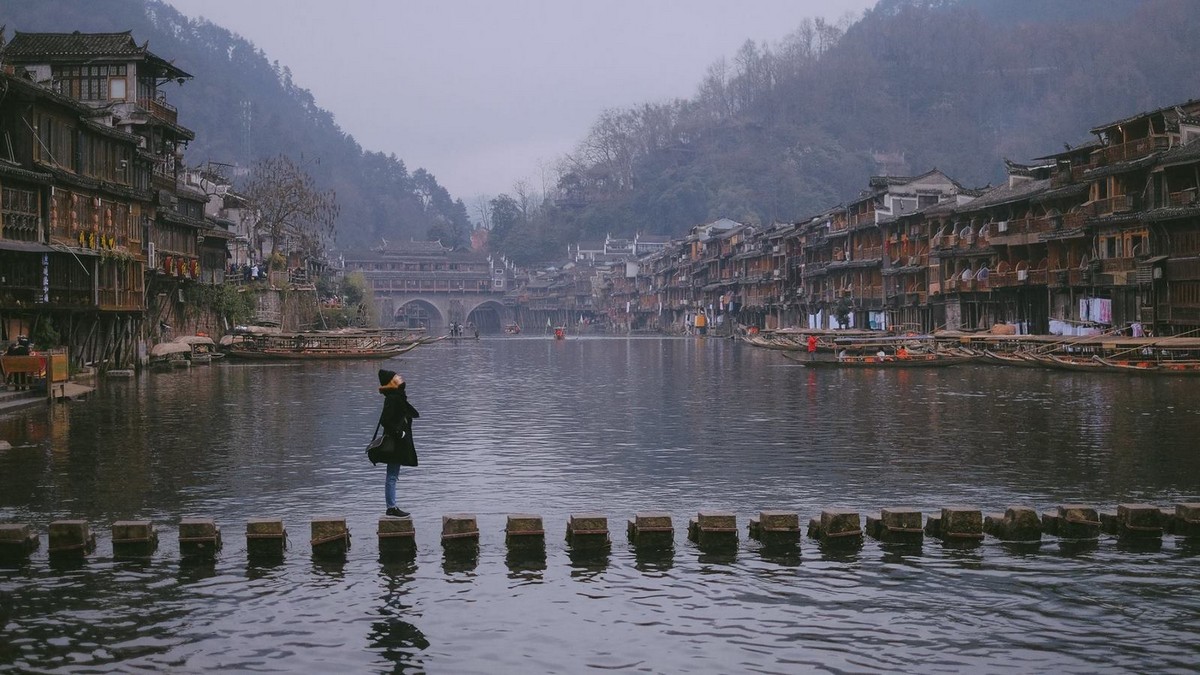 A tourist visa for China is valid for no more than 15 days so you should carefully plan your trip. The fee is USD40 per person for 4 business days. If using a tourist group visa, the departure date, arrival date and the number of people must be absolutely accurate.

People here speak only Chinese, they do not speak English or any other foreign language. Signs or menus are also in Chinese. So if you want to communicate, learn some basic Chinese words like: Hello: 你好 (Nǐ hǎo), 謝謝 (Xièxie), How much is this?: 多少 錢? (Duōshǎo qián). In addition, you can also install a translation software on your phone.

There are many ways to travel from Hanoi to Phoenix Ancient Town.

♦ Option 1: Take two flights Hanoi – Guangzhou and Guangzhou – Zhangjiajie and then drive 230km by car from Zhangjiajie to Fenghuang.

♦ Option 2: Take a flight from Hanoi to Truong Sa and then drive 500km from Truong Sa to Phoenix Ancient Town.

♦ Option 3: Take a car or train from Hanoi to Nanning and then continue to take a train to Zhangjiajie and then drive from Zhangjiajie to Phoenix Ancient Town.

♦ Option 4: Take a car or train from Hanoi to Nanning and then take a flight from Nanning to Tongren Airport, which is about 50km from Phoenix Ancient Town.

There are not many hotels in town, especially in the old town. So you can choose a homestay run by locals. There are homestay rooms overlooking the Tuojiang River and homestays in the alley with lovely gardens. Homestay prices depend on the type of room you choose and when you go. Average price is from VND400,000 to VND700,000.

VND and USD are not available and it is recommended to exchange VND to RMB as it is more profitable. You can bring USD as a precaution, but the exchange from USD to Chinese Yuan will be more profitable in Vietnam. 1CNY = VND3,400. USD1 = CNY6.5.

There are also ATMs for international cards like Visa and Mastercard. However, consider carefully when using because the exchange fee is very expensive. In China, it is now common to trade and pay with WeChat software on smartphones. It is very quick and convenient and many street vendors use it.

The food in China is quite greasy and spicy and it is the same in Phoenix Ancient Town. If you cannot eat spicy food, you need to tell the restaurant.Chinese people have a habit of drinking hot tea so hot water is usually available in many places. If you want to drink cold water, restaurants also have cold water but without ice, it is difficult to find ice here, even in restaurants.

Fruit is pretty fresh and cheap. You can go to the market to buy peaches or kiwi. Prices range from CNY5-10 per catty. 1 catty = 0,5kg and the Chinese use this unit when buying and selling in the market.

Besides fruit, there are many delicious snacks you should try such as shrimp cake, milk tea and fruit juice.

You can choose from many items like jewellery, house decor, musical instruments and food as gifts. Here you can bargain with the seller to buy them for only half or two thirds of the listed price.