When i begin to feel oppressed with high-Rise office buildings, crowds of people And the busy, noisy, dusty traffic, a Melody suddenly rises in my mind: “To those who travel to the Southern land. Blue sky and white clouds reflect on Cuu Long River. The great vast cajeput forest and green coconut palm trees … “. This song, from a Southern drama I watched as a little girl, reminded me of a childhood dream: to visit and explore the South, far away from the North where I was born and grew up. 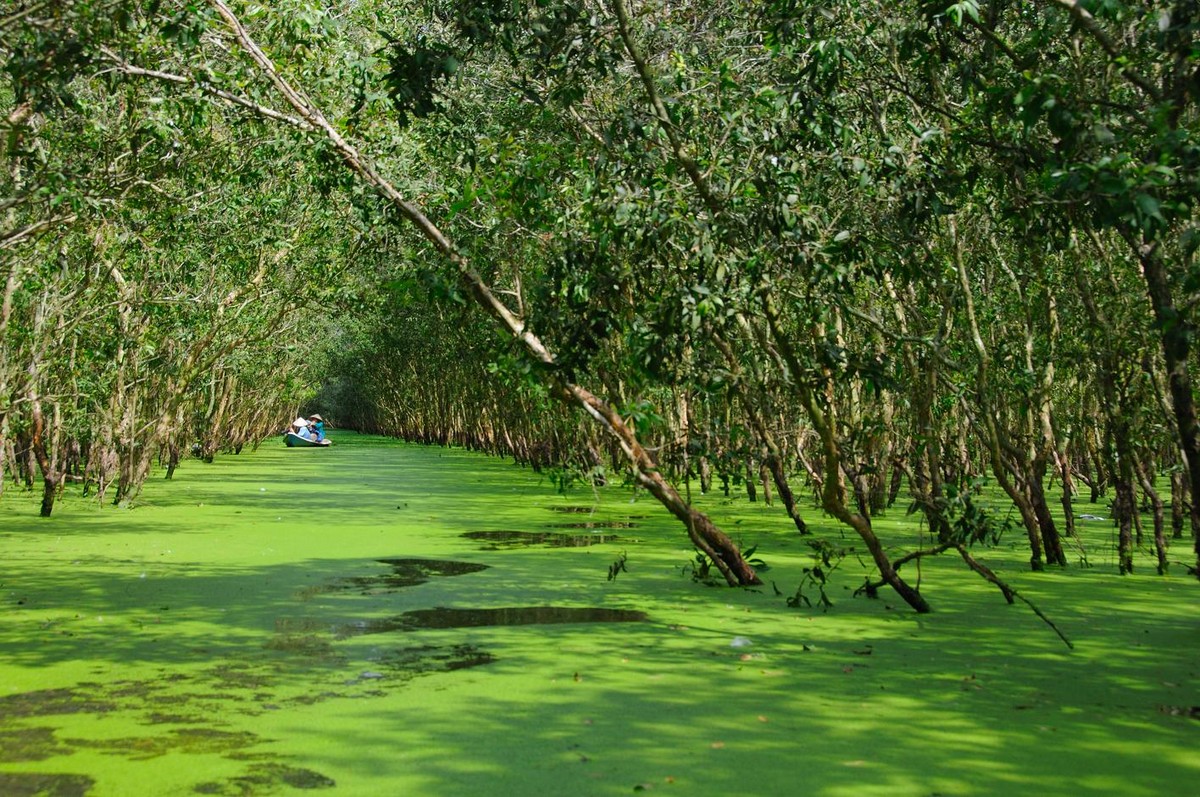 Unlike curious little Alice crawling from a rabbit hole, I entered Ho Chi Minh City from the door of an airplane. From the airport, there are many trips to the Mekong delta. Thirteen Mekong delta provinces and cities have rivers, canals, and lush green trees which provide unique features for the South. Tien River and Hau River are the two largest branches of Vietnam’s Cuu Long River; this river’s nine estuaries are often referred to as nine dragons, hence Cuu Long (Nine Dragons). These river mouths have formed a labyrinth of streams, channels and canals of the Mekong delta where each place has its own unique characteristic.

Coming here, you must not miss the vast green palm forests. These are not coconut trees rising from the ground; they are wild nipa palms, considered a “specialty,” growing in the marshes.

Thoi Son Islet, also known as Lan Islet, is located by the Tien River downstream, in Thoi Son Commune, My Tho City, Tien Giang Province. This is one of the places in this region blessed with the most abundant palm trees. Amidst the green colour of the coconut branches, our sampan floated on the beautiful gentle flow of the canals. We went through a lot of natural poetic “arches” made of coconut branches bending towards each other. Without any engine noises, we were able to hear the sound of the boat paddles, gentle as a breath in the slow pace of life here. Sometimes we heard the song of the birds calling each other, contributing to the beauty of this wonderland.

The nipa palm forest is not only a unique feature of the Mekong delta, but also very useful for its residents. Nipa leaves are used for making house roofs, baskets; the petiole and mid rib are used for making rope, string, and carpet, or it may be sundried to use for fuel. In particular, nipa fruit provides a sweet juice for the summer. Part of the Arecaceae family, the nipa fruit looks like giant dry pinecones with numerous nuts. Its fruit only has flesh, no liquid. People usually mix its flesh with sugar and cold ice to make a sweet juice, it is one of the Mekong delta’s favourite drinks.

Besides the nipa palm, another example of how well our ancestors adapted and mastered nature is the sampan. When people immigrated to the South more than three centuries ago, on this land of water, the Vietnamese sampan, a dugout canoe, was created. The sampan is made of three planks which look like three joined leaflets. Thanks to its small, compact size, and light weight, the boat can easily crawl through narrow canals. Moreover, thanks to its small and narrow flat bottom, it can move quickly even in shallow water. Therefore, sampans are considered the “legs” of the Southwestern people. From birth to adulthood, they always go to by boat to visit each other. Today, though there are now roads built everywhere, the sampan is still used in many villages. 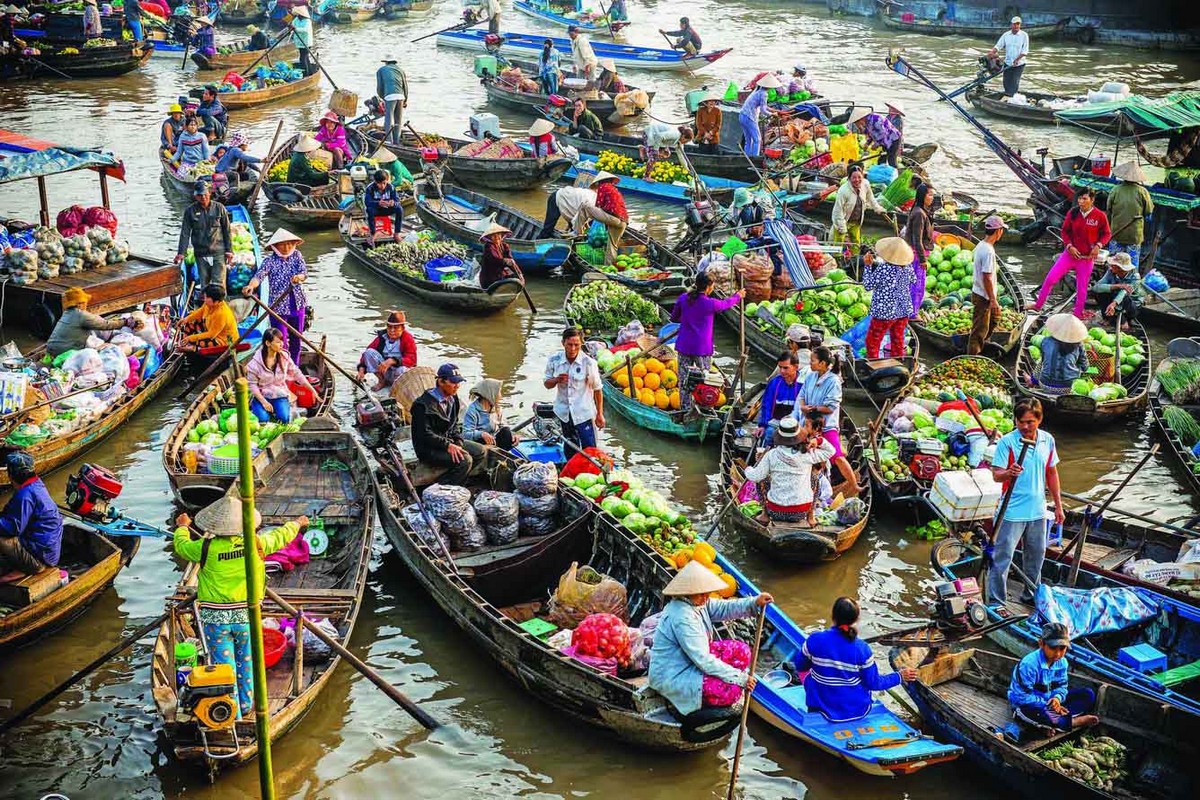 The Mekong delta also has another unique specialty, the hammock café. At first, hammocks were used by families for resting. Then, visitors asked to use the hammocks for a rest. After recognising the needs of these customers, shopkeepers decided to turn their cafés into more attractive and special places for visitors. Since its inception, hammock cafés have been very popular with tourists, especially motorcyclists. On the busier roads, there are more hammocks cafés; every ten or so kilometres, there are 5-6 hammock cafés. These cafés are quite simple, with nothing much more than a few hammocks hung on bamboo poles with thatched roofs. A small glass cabinet with some cold coconuts and a few glass cups are for anyone, including even the locals, the hammock café has become an indispensable part of everyday life. For tourists and travellers, the feeling they have when drinking cup of coffee and lying on the hammock will remain unforgettable on in the long journey of discovery.

A WORLD OF FLOATING MARKETS

Before coming to the Cai Rang floating market, we had a chance to admire the picturesque scenery of the Mekong delta on a boat departing from Ninh Kieu wharf. Along two river banks, small houses with metal or thatched roofs, on wooden or concrete pillars, looked like stilt houses in the water. A local said that only “rich” families were able to use concrete pillars. The poorer have no choice but use wooden pillars made from hopea odorata – a kind of wood that can withstand high temperatures and humidity for 10 to 20 years. If we come here in the rainy season, from June to December, we would not see these pillars because they are “hidden” under water, making all of these houses look like they are floating on the water, like a Venice of Vietnam. But actually, this Venice’s version is so poor that it makes us feel sad. Whether the pillars are concrete or wooden, you have to acknowledge the poverty of the Mekong delta, as people have said. 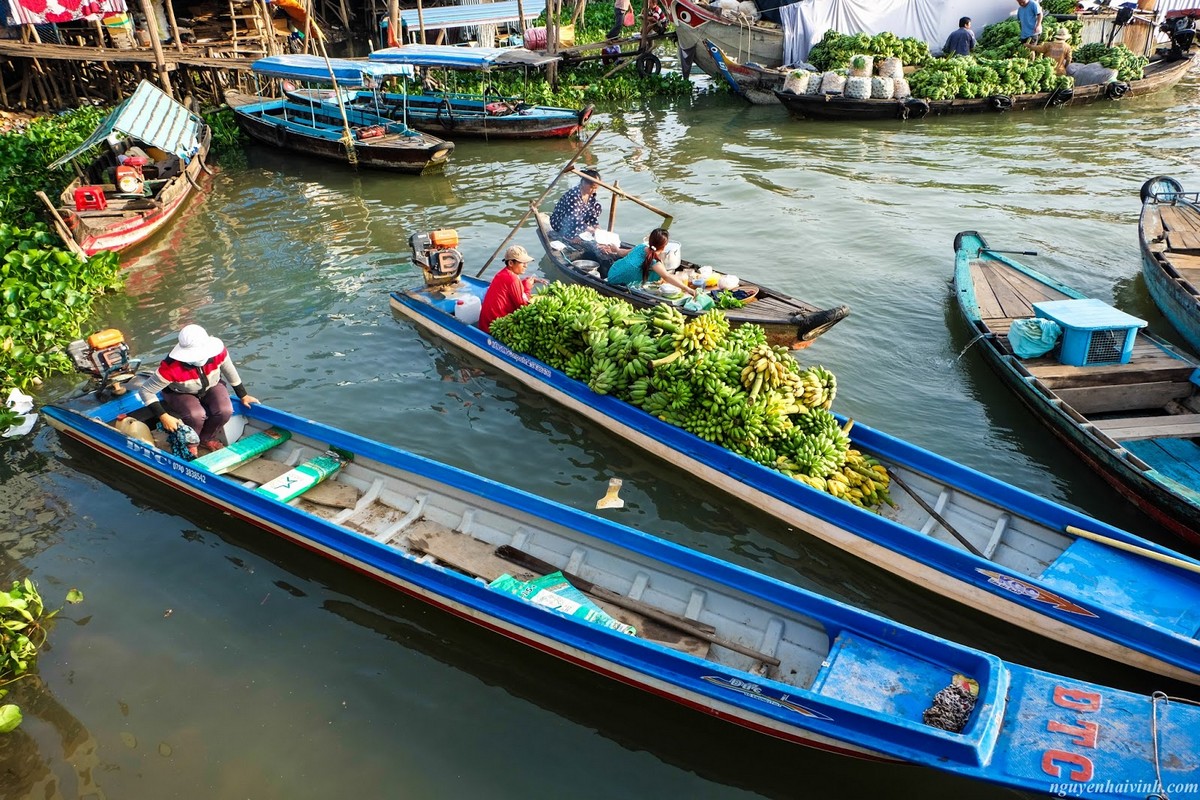 And there are even poorer families who cannot build their houses by the river and thus live on fishing boats. When we came by, they were spreading nets or doing daily tasks such as washing dishes and drying clothes, while children were swimming around, splashing water, and laughing happily. Although living in difficult conditions, people here still retain their friendliness and love for life.

While smiling with the babies, I realised we had arrived at the market and were caught in “traffic jam.” Although the river is very broad and there are not too many farmers’ boats, the large number of tourists’ boats crowded the river. Our boat had to wait for a while to get near the boats full of vegetables such as potato, tomato, pumpkin, watermelon, pineapple, as well as boats selling food and drinks in the centre of the market. The noisy sound of the engine and the calls of the vendors created a bustling atmosphere. I was a little disappointed because I a bustling atmosphere. I was a little disappointed because I did not see any row boats, and there were only a few boats of farmers and sellers; also, the market was not as crowded as I imagined when I saw it on the Internet. “Everything changes,” Caroline Shaw, a tourist from England, said with a somewhat sluggish tone. “I came here 13 years ago. At that time, there were more boats, and most of them were row boats, and the goods were more diversified and colourful.” Still, she found the floating market very interesting and distinctive, as she had not seen anything like it in Europe. However, the boatman was worried that in the near future, the floating market will disappear as the road system develops and no one wants to go to the market on the river anymore.

Leaving the Cai Rang floating market, we once again passed by the small houses with the high-rise buildings in the distance. Life always has many contradictory aspects.

Back in the city, we strolled along the romantic Ninh Kieu Quay. Located at the confluence of Hau River and Can Tho River, Ninh Kieu Quay is the commercial centre of Can Tho City, where hundreds of boats pass by. Ninh Kieu Quay was built in the 18th century for trading purposes, but its beauty has made it become famous in many literary works. Especially at night, the glittering lights of the floating restaurants, reflecting on the river, make this place more beautiful. Perhaps that’s why so many people come here to enjoy the cool breezefrom the river. Along Phan Boi Chau Street and Phan Chu Trinh Street, there is a barbecue and junk food paradise as varied as Taiwanese night markets. From popular dishes such as grilled chicken leg and wings, grilled skewers, grilled vegetables, tofu, smoothies, and sweet dessert soups to regional specialties like tung lo mo – a Cham sausage – and grilled shrimp, octopus, and squid are all delicious. Prices are very reasonable, only half compared to Hanoi’s seafood. 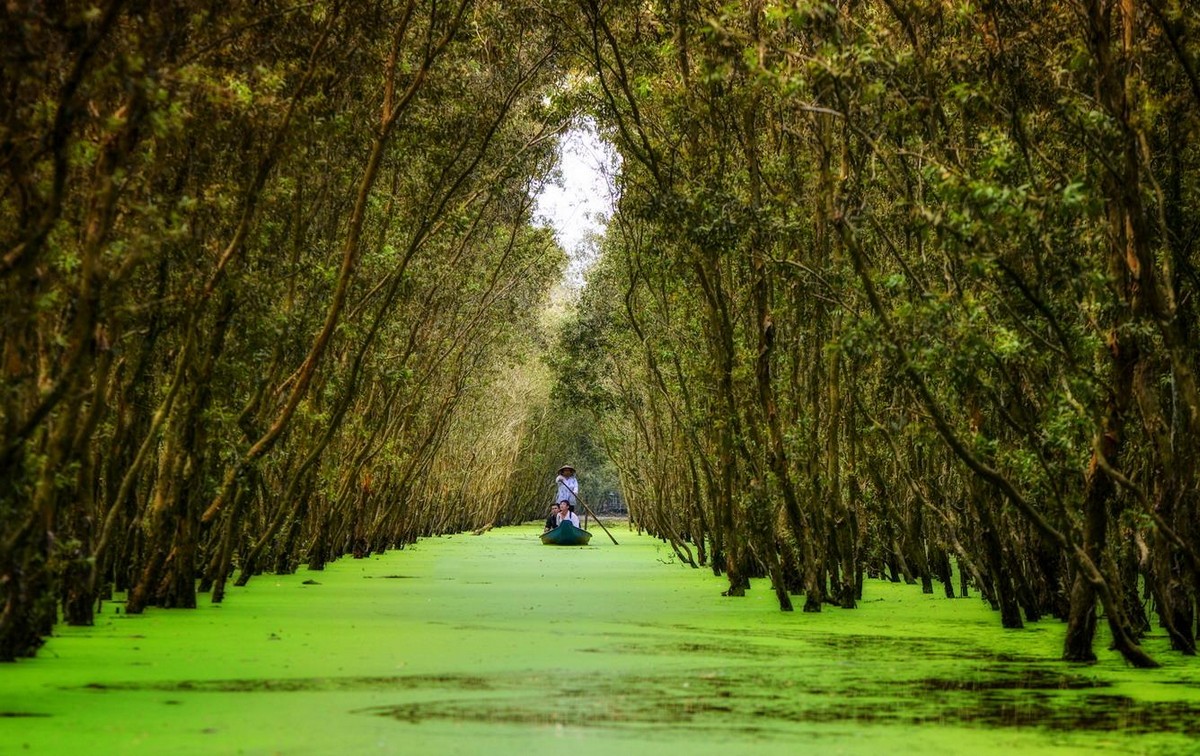 We were about to end our journey in Can Tho, but an American friend we met on the trip advised us to visit the Tra Su cajeput forest in Chau Doc, An Giang Province. He was extremely impressed and said he would return to Tra Su if he had a chance to visit Vietnam again.

Chau Doc is very remote area, very close to the Cambodian border. We were rewarded when we arrived at Tra Su: I was completely mesmerised by the immense green of 850 hectares of cajeputs growing in water. It seems that the green colour of thousands cajeputs is not enough to satisfy this land, so in the rainy season, nature also covers the surface of the water with a dense carpet of pistias, creating an extremely unique fresh, green world. The cajeput forest is home to 140 species of plants, 11 species of animals, and 23 species of fish, including rare species on a protected list. Here you can easily see the storks, coucals, and mallards, feeding or swimming in their kingdom.

We stopped at a leafy hut in the middle of the forest. From there, as we swayed in our hammocks, we could see Khmer villages in the distance. Here, we immersed ourselves in wild nature, a beautiful dream from which I do not want to wake up and return to real life.