(#wanderlusttips #Brazil) #Salvador) If you’re visiting Brazil, the host of Summer Olympics 2016, then Salvador has to be on your list of must-see destinations. The northeastern city and capital of Bahia is the birthplace of Brazil, where Portuguese, African and Indian cultures melded to create the colorful country we know today.

To better understand Brazil’s African roots, a visit to the Afro-Brazilian Museum is definitely in order. The museum expertly showcases artifacts from Benin, the West African country where voodoo is believed to have originated, and Central Africa, where many of Brazil’s slaves were brought from prior to the 19th century. The museum also showcases artifacts indigenous to Brazil including sculpture, pottery and clothing. 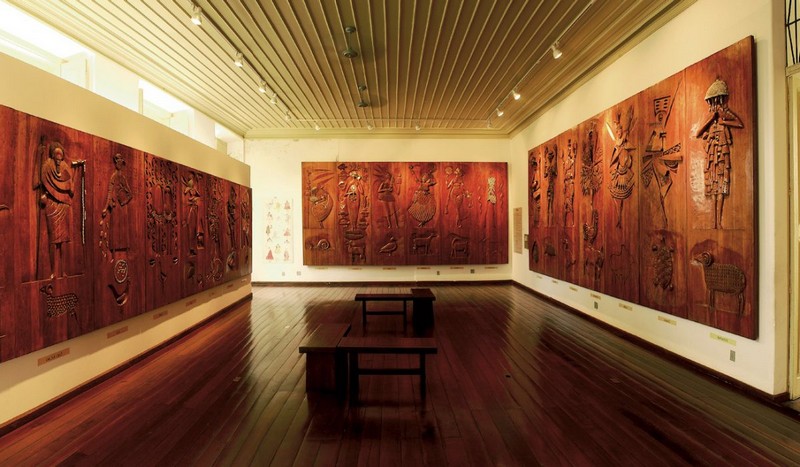 But the most impressive exhibit is one dedicated to the Orishas — the deities that the slaves paired with Catholic saints so they could continue to practice their old Yoruba traditions in a new religion called Candomblé. Exquisitely carved wood panels — over 2.7m tall — depict 27 of these deities and the spiritual powers that followers believe they possess.

It’s hard to miss the significance of religion and spirituality in Salvador with 365 Catholic churches spread across Salvador. The oldest of these churches, clustered in historic Pelourinho, date back to the 1700s and boast well-preserved Baroque and colonial architecture. São Francisco may be the most boastful, though, with its ornate interior coated with gold leaf — some say 1 ton of gold leaf. It’s hard to question the figure when you spy the gleaming altar. 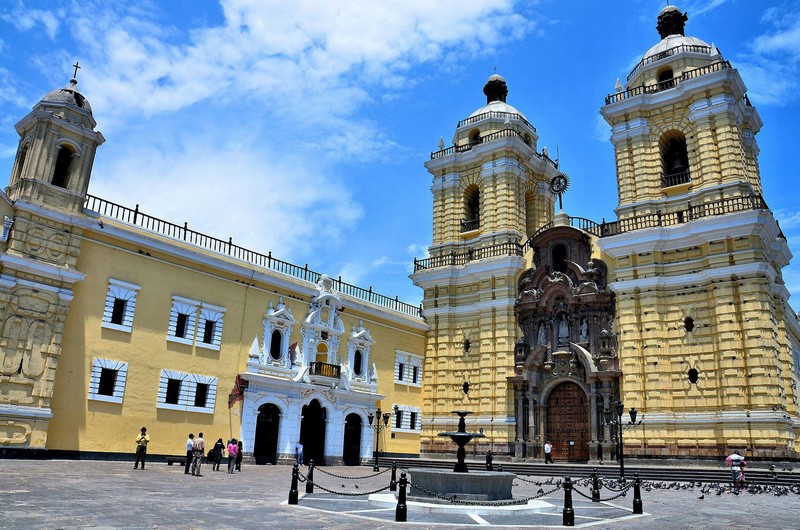 Outside, the convent courtyard features gorgeous blue and white hand-painted Portuguese tiles. Many of the cherubs and other religious ornamentation in the church appear a bit odd and distorted. They were the handiwork of disgruntled slave artisans who were forced into Catholicism and decorated the church with pregnant cherubs and other figures distasteful to their captors.

Largo do Pelourinho –  the colonial square

Largo do Pelourinho – Salvador’s restored colonial square is the epicenter of Brazilian culture and a UNESCO World Heritage Site. Its dark past as a slave-trading market and whipping post or pillory (pelourinho in Portuguese) is almost hidden behind a brighter present: Pretty pastel pink, yellow and blue buildings serve as the backdrop to wandering tourists, Bahian vendors and impromptu capoeira demonstrations — an acrobatic display of martial arts and dance performed to drums. 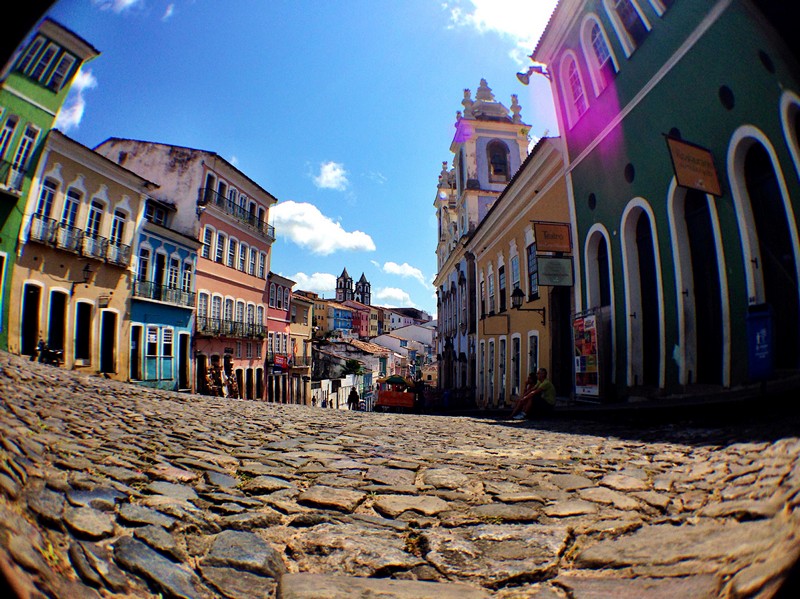 If you happen to be in Salvador for Carnival, you can join the crush of drummers, dancers, bands and other revelers squeezing into the square for a last run at debauchery on the eve of Lent. Be sure to look out for Carnival favorites such as the Sons of Gandhi, or “Filhos de Ghandhy,” as the locals call them. Thousands of men in white turbans sing chants of African origin. Meanwhile, the Afro-Brazilian group Ilê Aiyê parades in its trademark yellow, red and black garb. And the cultural group Olodum showcases its infectious samba reggae beats — a unique mix of merengue, salsa and reggae rhythms.

Elevador Lacerda – One of the most famous postcards of Salvador, it was inaugurated in 1873. It was built to improve the connection between the higher and lower part of the city.  You travel more than 70 meters in one of the tallest public elevators in the world. Jesuits installed the first manual rope-and-pulley elevator around 1610 to more easily transport goods and passengers from the port to the settlement.  In 1868 an iron structure with clanking steam elevators was inaugurated, replaced by an electric system in 1928.  The elevador Lacerda yet brings a curious fact, two of its four cabins pass inside a rock. 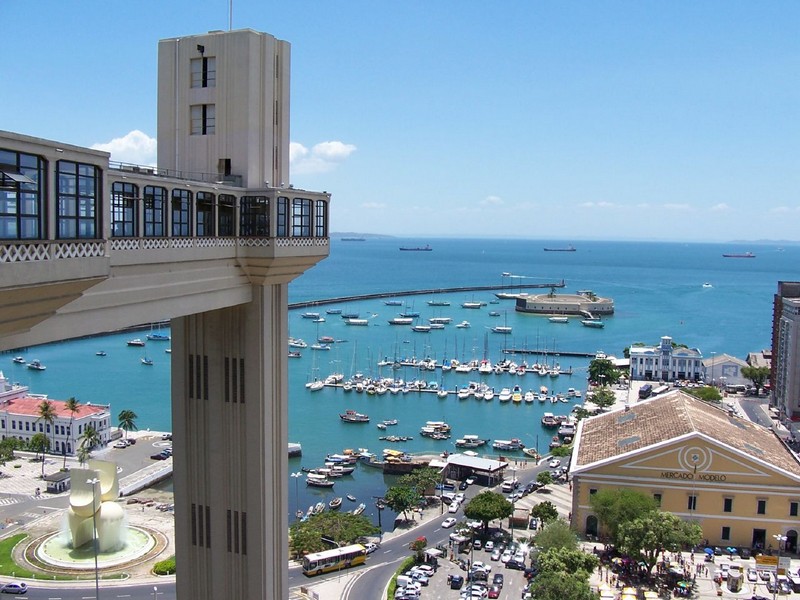 Facing the elevator are the impressive arches of the Câmara Municipal, the 17th-century city hall, which occasionally puts on cultural exhibitions.

Seeing the carved Orishas on display in the Afro-Brazilian Museum is definitely impressive, but not more than seeing them in action through Afro-Brazilian dance. Balé Folclorico da Bahia is Brazil’s world-renowned folkloric dance company performing traditional Bahian dances. Its dancers dress as Yoruba spirits like Oxum, the goddess of the rivers and fertility in a gown of yellow and white, and Xango, the god of thunder and fire in a suit of white and red. 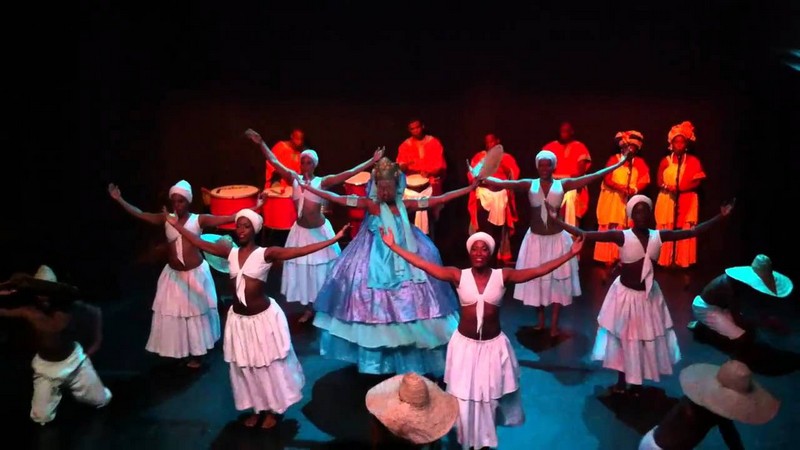 Not only do the dancers represent the deities through bursts of color, but through spectacular dances, retelling the legends of the spirits and how they came to be along with rhythmic percussion and song.