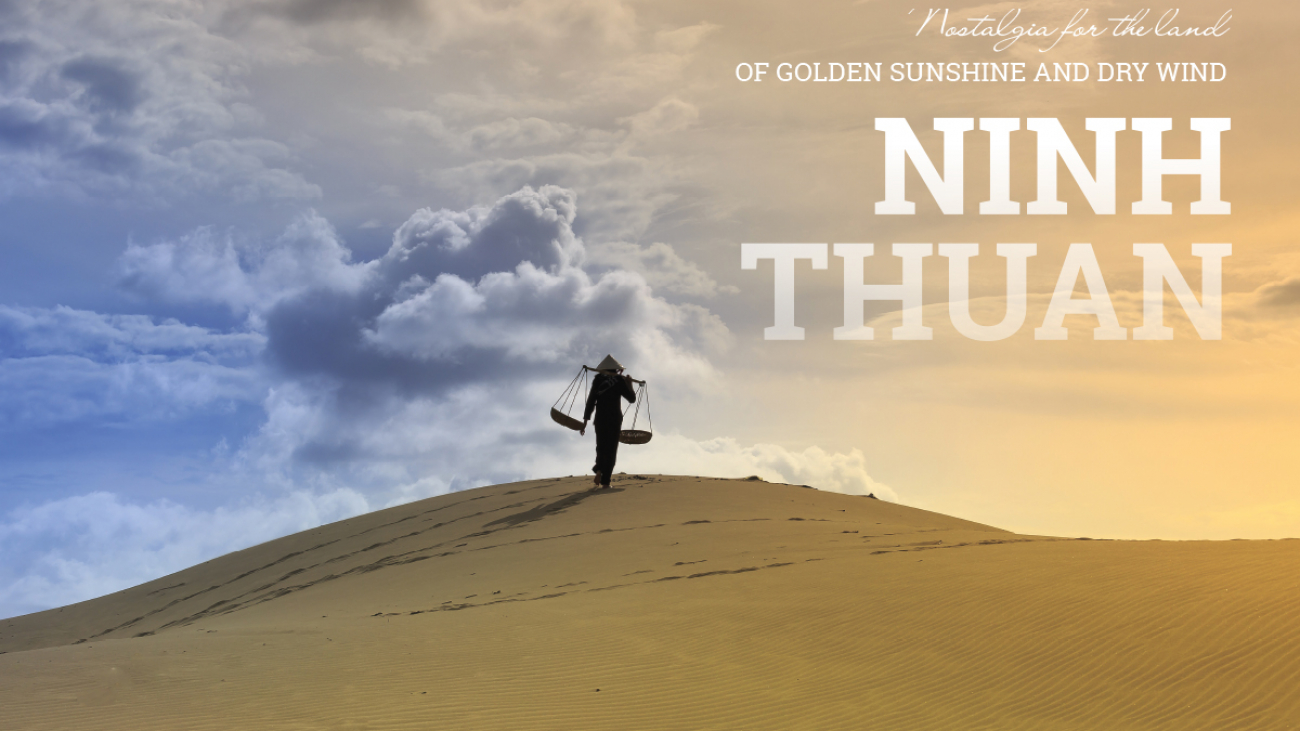 The bright golden sunshine, crystal clear turquoise water, and hospitable locals evoke a sense of nostalgia to those who have visited Ninh Thuan. I fell in love with the land at the end of the central coast after days of exploring and creating beautiful memories of a harsh yet beautiful and extremely peaceful land.

I visited Ninh Thuan in the early days of September. Arriving at Cam Ranh airport, I picked up a taxi to travel to Phan Rang – Thap Cham, the capital city in Ninh Thuan province. It is about 70 kilometres from the airport. The land located near the end of Central Vietnam welcomed me with its golden sunshine, which was a little hot yet not uncomfortable. When the sun went down, the city suddenly became so tender, as if the dazzling sun at noon had never ever existed. The wind blew gently and the air was cool until early in the morning. Occasionally, the rain poured down for a few moments, just enough to dispel the heat, but not too much to disturb people from walking and working. As it is located in the South Central region, Ninh Thuan often has sudden rainfall much like the weather in Saigon and the southern provinces of Vietnam.

During the few days I spent in Ninh Thuan, I was very interested in the energetic and harsh weather of this land. The locals here burst out laughing when I mentioned this to them. They said I was lucky to visit at the time I did, when the peak season of Ninh Thuan ended not too long before I arrived. For a long time, this place was called “the land of strong wind and extremely hot sunshine”, because from the beginning of summer to August, Ninh Thuan’s weather is always hot, while rain is scarce.

Though the summer weather is extremely harsh, the people of Ninh Thuan are not hot-tempered or difficult; they are really sincere and nice. Renters, food vendors, taxi drivers, and even passersby are willing to help or simply smile nicely at us as a way of greeting a visitor from a faraway land. The cost of living here is quite affordable; prices are much lower than in large cities in Vietnam. I remember one night, my two colleagues and I visited a famous restaurant. We only spent VND150,000 for a delicious dinner which consisted of three duck noodle dishes served by a kind waiting staff.

Phan Rang – Thap Cham is a small city, mainly considered as a transit place for travellers passing through to larger, more popular tourists destinations in the province. The outskirts of the city are surrounded by white salt plains, sparkling in the sunshine. Visiting the residential area, it is common to see many mossed houses which feature yellow walls, green doors, and the architecture of more than half a century ago. Vast vineyards that stretch over many miles with ripe fruit hanging on the truss are a particularly attractive feature here. In the midst of a sunny afternoon, we visited a vineyard, went under leaf-covered grape trellis, held scissors to cut each cluster, and then put them into a trolley. Occasionally, we picked a few fruits and put them in our mouths, which helped dispel the heat of the weather.

In Phan Rang – Thap Cham, there is only one famous tourist attraction, which is The Po Klong Garai Towers. The monument which is located on a hill looks prominent amidst the industrial streets of the 21st century, thanks to its isolated position and extremely eye-catching red bricks. Three main towers, the fire tower, and the gate tower built in the late 13th and early 14th centuries were devoted to worship Po Klong Garai (1151-1205) – the king who has a lot of merit in the ancient Cham kingdom. Not much restoration has been done to the tower, as the people want to keep it intact. Therefore, until now, it is still in the original shape which bears the imprints of time and history. Tourism is not really developed in Ninh Thuan, which is also an ideal aspect which helps to maintain the classical beauty of The Po Klong Garai Towers. The locals, especially Cham people, often come here to worship, pray, go for a walk, or record traditional dance performances.

Arriving in Ninh Thuan because of work, I was privileged to be immersed in the pace of everyday life in Phan Rang – Thap Cham. For me, this is the best city to live in, in all of Vietnam. Though it is modern enough to look like a young, urban city; it doesn’t have the same hustle and bustle as Saigon or Hanoi. I loved the evenings when the cool breeze blew in Phan Rang. After dinner, people often flocked to the city square. Kids ran around, adults walked or found a place in the roadside bar, drank a glass of water, and listened to live music. Time seemed to stop or elapse slowly; people relaxed and temporarily forgot all of their worries.

Ninh Thuan is hot, dry, and windy. The dry season lasts all year round from December to August; from June to August is the harshest period. The rainy season is only from September to November.

Ninh Thuan does not have its own airport. In order to travel there, you can fly to Cam Ranh – Khanh Hoa airport or Lien Khuong – Da Lat airport, then continue to travel by car or taxi.

Phan Rang – Thap Cham city is a convenient place for you to visit famous tourist spots of Ninh Thuan. Hotels and hostels are the preferred accommodation with a variety of options ranging from affordable to luxury.

In addition to the famous sites of Ninh Thuan mentioned in the article, you can visit many other beautiful places of the province such as Rai cave, Vinh Hy Bay, Ninh Chu beach, and Nui Chua National Park.

In Ninh Thuan, you can buy grapes, products made from grapes, handicrafts, or pottery made by the Cham people as gifts for your family and friends.