Every time i come to a new land, i choose a local person to be my partner. Normally, we stick to the plan, go to places that are yet to be on the map, enjoy the food at nameless restaurants, and listen to mysterious stories passed on over generations. 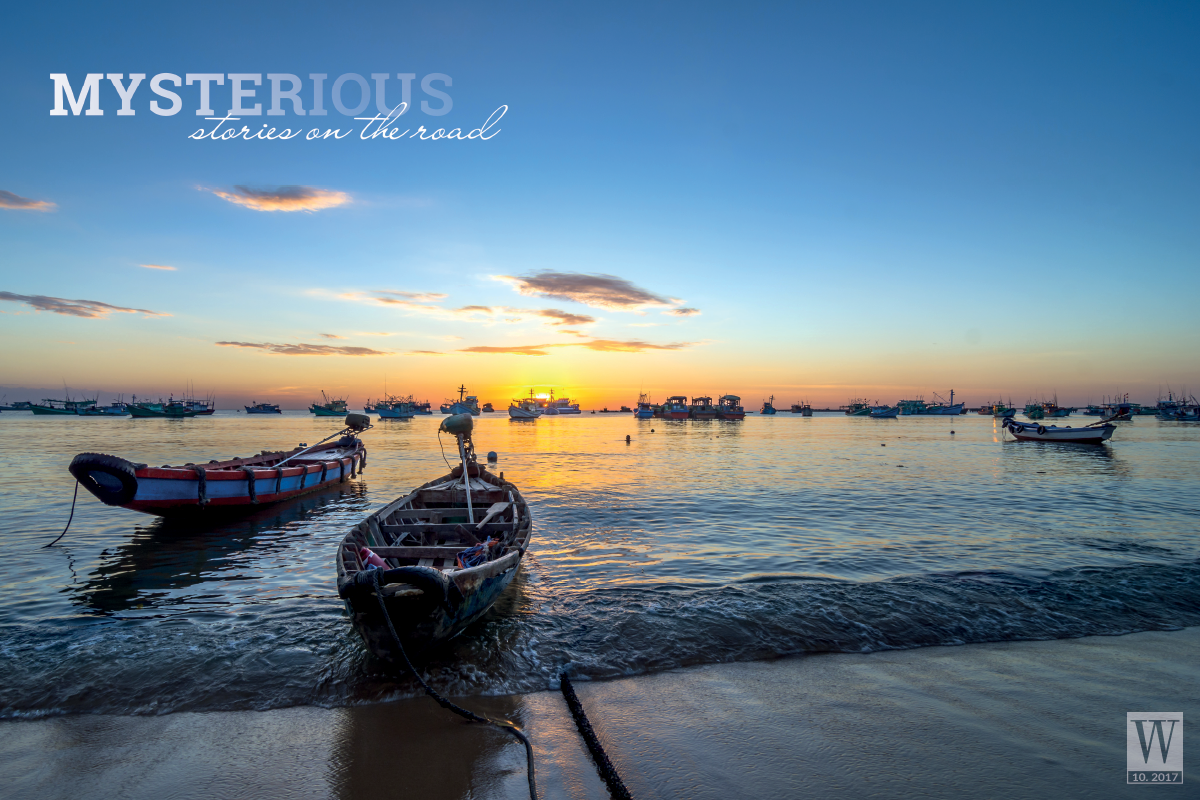 In the twinkling lights of the restaurant near the sea, there was a sea poison tree next to me, with fruits hanging down like lanterns radiating haunting light. He asked me if I could see the sparkle out there. I said yes, and the ships offshore were constantly flashing lights on a black sky. This time he raised his hand to show me the red dots near the shore; I did not see what they were, what I could see was a high mound, probably with some incenses still burning.

I started to shiver, not because of the cold winds. “In ancient times, King Gia Long’s troops were ordered to sail to the remote island to explore new land and find minerals. Ly Son was the stopover of the soldiers before going to the sea again. Because of strong winds in the sea and unbelievably large waves, the soldiers went missing, whose bodies were not found. King Gia Long deeply grieved for the soldiers and personally went to Ly Son island with a good feng shui master to do the necromancy for the dead soldiers,” said my local friend, quietly but passionately.

Then he said, the feng shui master ordered to dig the clay in the Tien well to form the statue of a dead soldier; used silk to make tendons, mulberry branches to make bones, charcoal from the tree to make the lung; fully shaped the five senses. Finally, egg yolk was scooped into the figurine to make it look like real human skin. The figurine was then put in a coffin and the feng shui master did the necromancy with a long funeral oration.I was startled because it meant that there would be no one in that tomb. Therefore, I could not stop myself from being qualmish while looking at the fading fire that looked like eyes looking up at the sky. 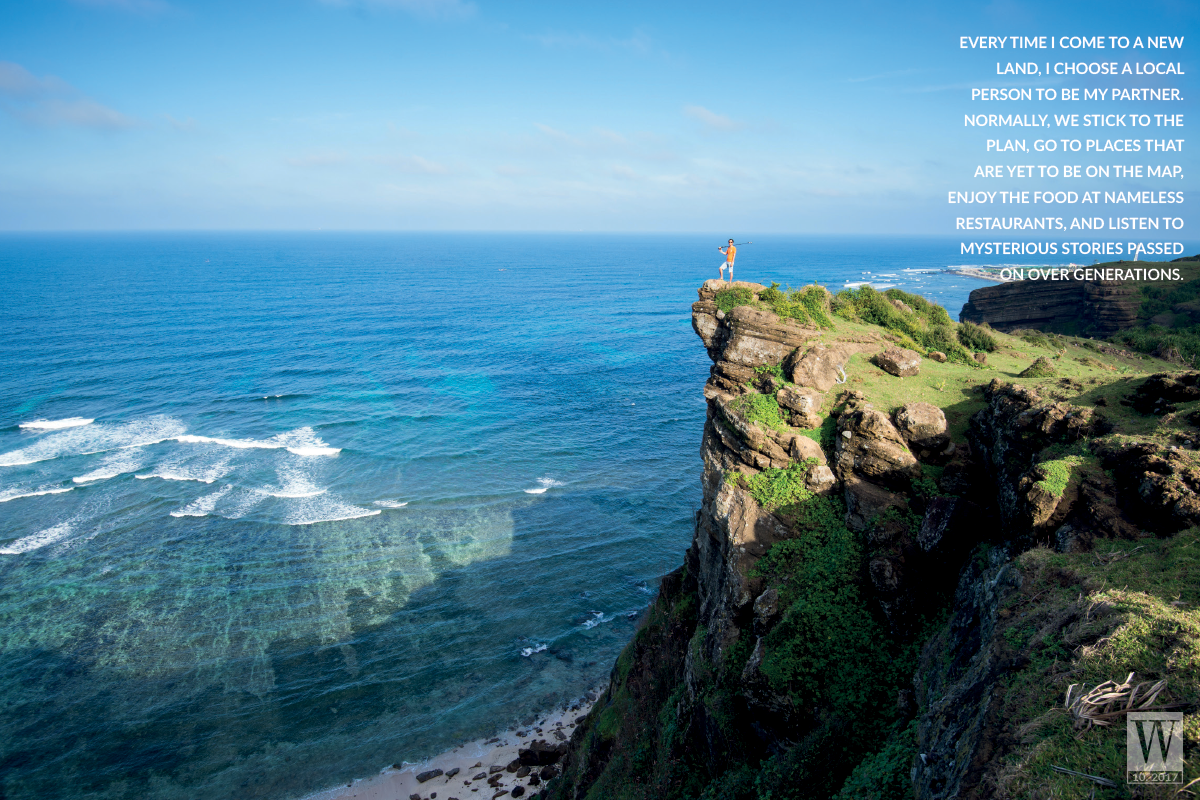 According to the narration, Ly Son Island residents called it wind tomb. After the necromancy, they believed that the dead soldier’s soul would entered the body as if he had returned. Later, whenever the sailing season starts, fishermen perform rituals for Hoang Sa soldiers, and fishermen-shaped figures are dropped into the sea. They consider figures as a substitute to save their lives if something goes wrong.

In the next morning, I went around the island on the road from the East bank to the West bank. The only ten-square-kilometre island has countless unknown graves simply dug and fenced with bricks or tree branches. I heard the crying in the wind, not from the offshore but from the land, from the unknown graves of people who had lived on the island.

PHU QUOC – THE “GHOST” TREE AND WELL FROM HEAVEN

It rained heavily on my second day in Phu Quoc, just like fate. Couldn’t go anywhere, we sat around chatting together. A friend in the group began with a mysterious and spiritual story.“Let’s go to see the ghost tree this evening.”“Where?”Then he said, in the airport, next to the runway there was a tall tree with its canopy stretching that wasn’t cut down.

Actually, no one could cut down that tree, because anyone who came near the tree would suddenly feel ill; the machine could not get close to the tree as it would break down without any reason. Legend had it that the wraith of a girl entered the tree and stayed in the surrounding area. Other rumours went around that it was the sacred tree of the forest, the core of the land so outsiders could not harm. In any case, the existence of the “ghost” tree does not affect the runway, so the airport owner kept it there. 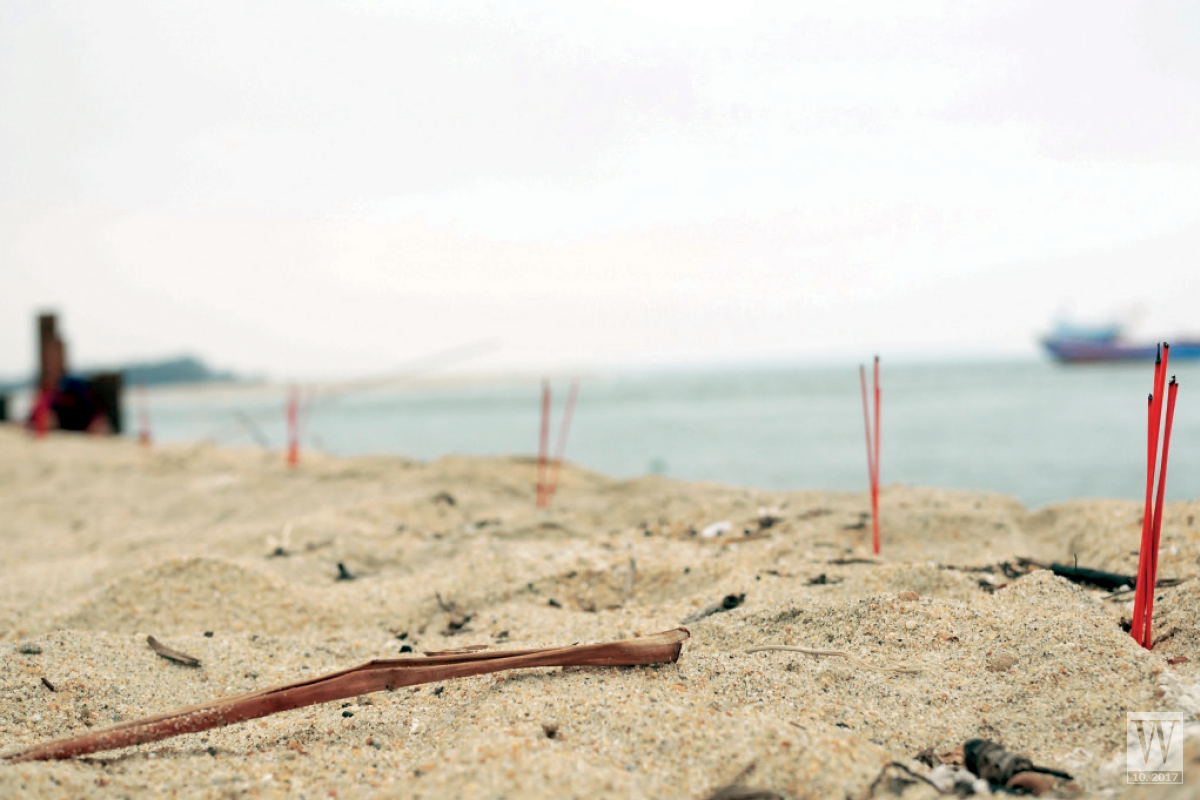 I could not imagine how the “ghost” tree looked like, so I looked for an image on the Internet. It was a tall tree compared to the surrounding grass, with the white trunk and spreading foliage, standing alone next to the runway in the wind. It made me feel like a girl was waiting for something there. Putting aside the “ghost” tree, my friend continued to tell the story of Tien well in Phu Quoc Island, a dried-up well located only five metres from the sea but there is always fresh water. Water flows from a crack in the rock, which is protected by the fence of bricks built by local people.

“King Gia Long while running away from the enemy was drifted to the land in the state of hunger and thirst, and all his soldiers were too tired to continue. King Gia Long prayed to the heaven to grant water and food for his soldiers. He plugged the sword into the rock, making a crack for freshwater to flow all year round. Islanders believe that the water in that well can cure many diseases.”

Aunt Ut, who let me stay in her house for a few days, also contributed to the story. She had lived here since she was a child; she had been to everywhere from the north to the south of the island. She remembered every story that had happened on this land.

She also said, “If it stopped raining early, I will take you to the North Island; the Mother Kim Giao area is very beautiful with fine sand and clear blue sea. On a clear day, you can see the Ta Lon peak of Cambodia very close. Mother Kim Giao is said to be the founder of Phu Quoc Island, also known as Mother Goddess, who is extremely sacred. People here have practiced the rituals of worshipping Mother Kim Giao before men go sailing or women go into labour in order to pray for luck and safety”.

I listened attentively to aunt Ut about the story of Mother Kim Giao because, actually, it sounded “less terrifying” than the “ghost” tree in the airport. Crossing a dense national forest and an obsessive field full of white trunks and canopy like ghosts scattering in the airport, we reached Mother Kim Giao area in joy and regret. Till later, I thought that our trip was successful because of Mother’s permission. There was an unidentified team that went to smash the temple and they had unpleasant results. According to the local people, it was Mother’s “punishment”. It was possible that the events in their lives had nothing to do with the “supernatural” power that human beings have with their vivid imagination; however, I could not help but shudder at the mysterious story passed on many generations of local people.

With the painful memories of a fierce war, before the flight to Con Dao, I heard a lot of advice such as “Do not bring anything from the island from the stone to the flowers. It is said that each branch of the trees in Con Dao is attached of souls.” The road from the Co Ong airport opens a panorama of the sky and mesmerized blue sea. As the sun rays of the dawn pierced the canopy of the cottonwood, it was time for us to begin our journey to discover the relics in the island. 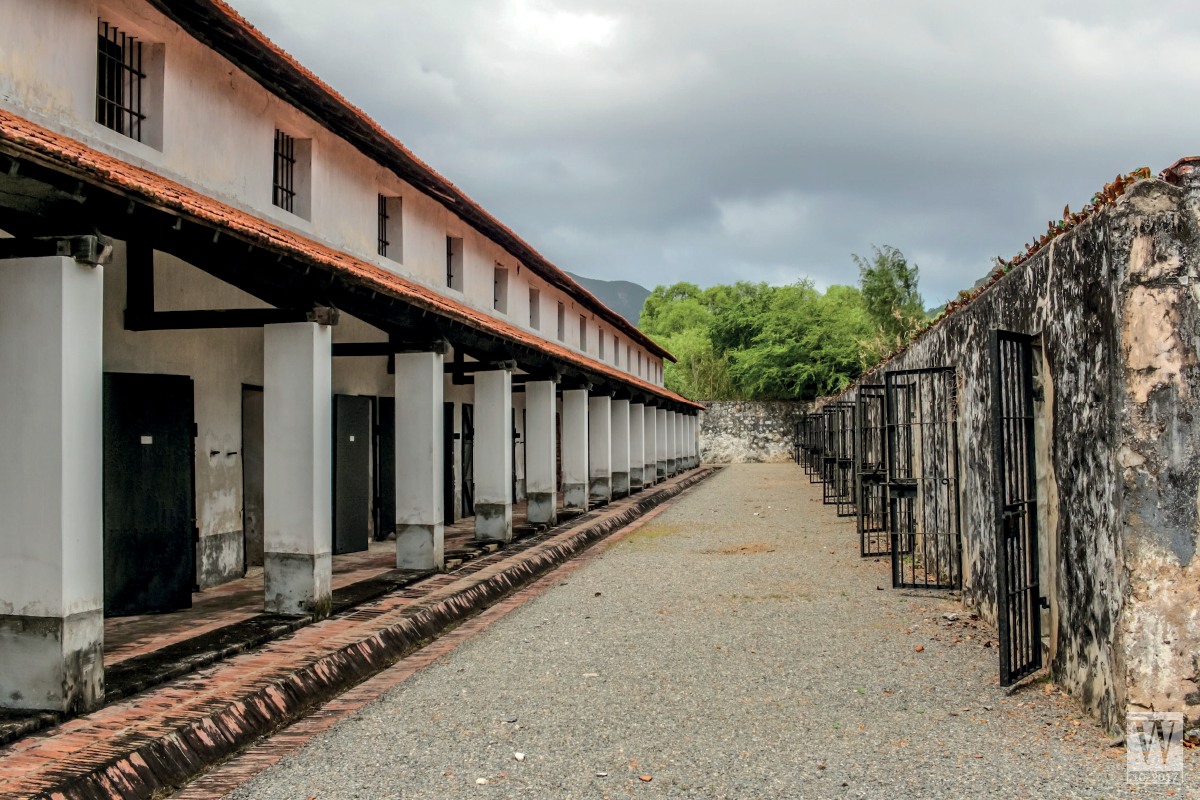 Contrary to its poetic beauty, this island still bears so many scars of the war. In the constant voice of the tour guide, we went through countless prisons, detention centres, rooms for solitary confinement and witnessed countless detention and brutal tortures that had killed more than 20,000 Vietnamese in more than 100 years. From one side of the prison wall, the old trees rustled with the gentle sea breeze. However, from the other side, there was an unbelievably tragic story of the hell on earth. According to the tour guide, among the prisoners tortured by being soaked half of their bodies in the dung compartments, only 1 or 2 survived. The sunshine of Con Dao was brighter, and it was also when we visited the grave of Vo Thi Sau. This time, the painful memories also carried a mystery.

The sweet voice of the island girl could not stop us from shivering when listening to the story of a security who had followed Governor Bach Van Bon’s words to smash the gravestone of Vo Thi Sau. The next day a new gravestone was rebuilt while the Governor was terribly thin, wandering along the street near the hospital. He had a high fever, could not eat anything and died a few days later. There are countless terrifying stories related to Sau’s grave. Some reckless people also assumed that visiting her grave at 12am at night is the most sacred moment. 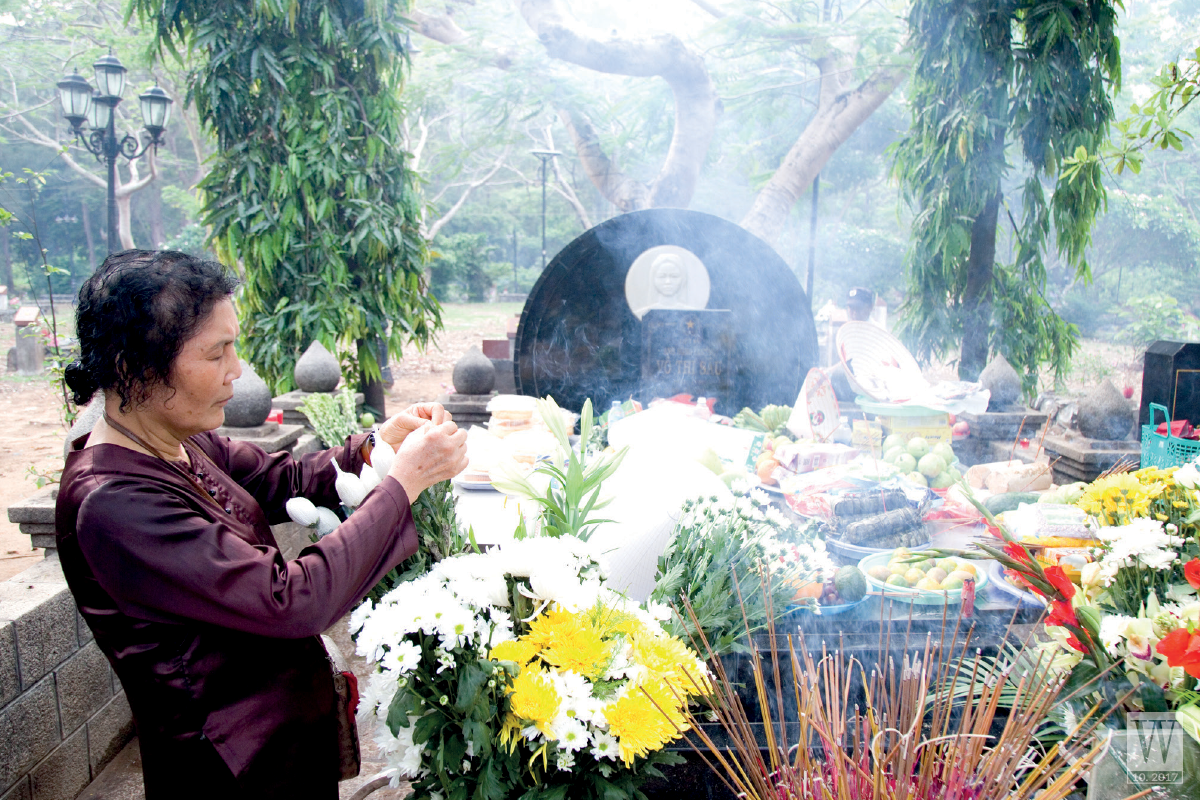 The painful memories kept clinging on to my mind. At night, the sound of the cottonwood rustling, together with the murmurous sound of the waves just a few steps from where I slept was like the whisper of the tortured souls in the past.