Sweet, salty, spicy, sour, bitter,…as long as it packs a punch, Laotians would approve it. Also a lot of sticky rice. Laos cuisine bears certain similarities to its neighbours, combining fresh ingredients and a lot of spices. There are also Western influence, especially the French. Laos recipes might have been drawn from Northern Thailand or Viet Nam, but there are claims otherwise; nonetheless, the seven delicacies below are the reasons why Laos should be next on your list.

Laos cuisine is hearty, honest and close to nature. Being a landlocked country, seafood has never been a thing in Laos, but their freshwater counterparts are always ready. Common ingredients include a wide array of fragrant and fresh vegetables, from fresh bamboo shoots, ginger, galangal, lemongrass, dill, cilantro,…all of which you can find the most refreshing and fragrant. And not to mention the outstanding combination of meat with vegetables, creating a combination of sweet, sour, saltiness, even bitterness and pungent, but all in all a pleasant experience.

The national dish of Laos, spelled in English as larp or laab (with the latter being more phonetically correct), laap deals a heavy punch for first-timer to Laos cuisine. The word laap basically means meat prepared straight out of the butcher to maintain its freshness. 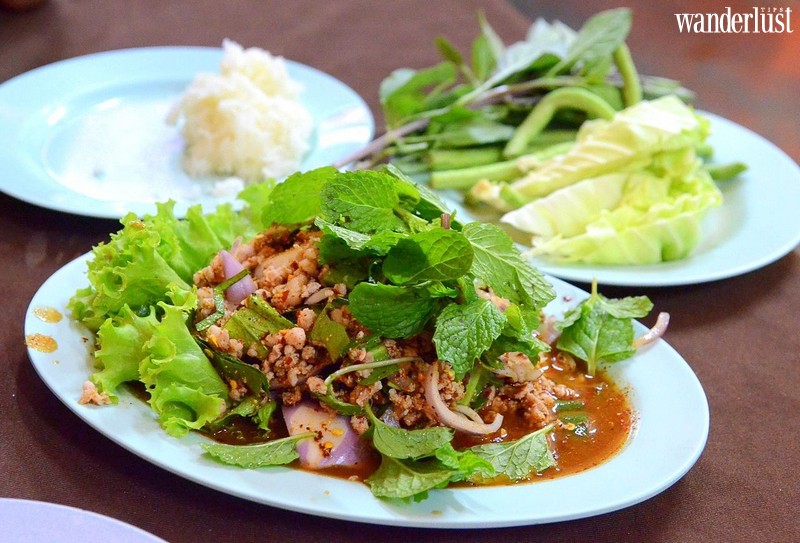 Often served with sticky rice, another Laos staple, laap can be made with chicken, beef, duck, fish, pork and the vegetarian option, mushroom. The meat (can either be cooked or raw, with the latter less popular) then minced, adding fish sauce and chillies, and a garden of fresh herbs, lime juice, and toasted rice powder. All then mixed evenly. Laap in Laos is often served in special occasions, or if you were invited to a Laos household and got served laap, congratulations, you are the guest of honour. 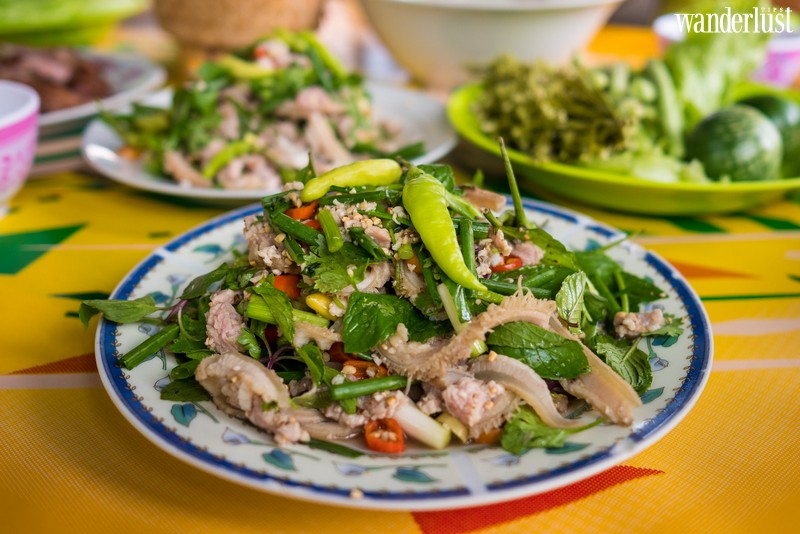 Most of us are familiar with the ripe, soft and sweet papaya, served as a fruit after a heavy, meaty meal. Of course, papayas are also served that way in Laos, but also served green as a salad. In Laos, you can find this almost anywhere, from street vendors to fine dining restaurants, and it is easy to make it as well. 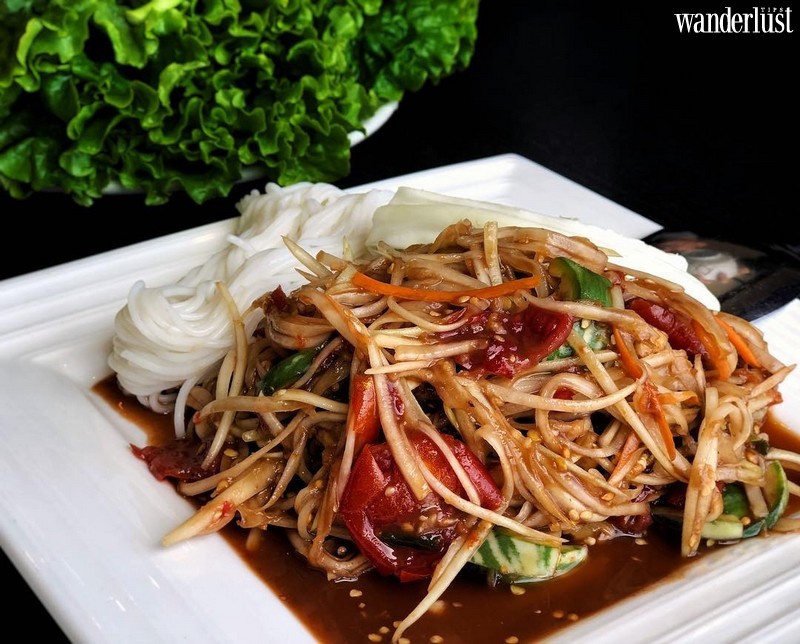 Where this dish comes from is a matter of debate, but all we know is, the dish exists in different variations in Northern Thailand and in Viet Nam. Despite the slight differences in ingredients, it is made with shredded green papaya, sliced tomatoes and fish sauce; mixed well together with herbs, chillies, in some regions toasted peanuts as well. The results is a sweet, sour, spicy and tangy salad that would beat the heaviest meal. 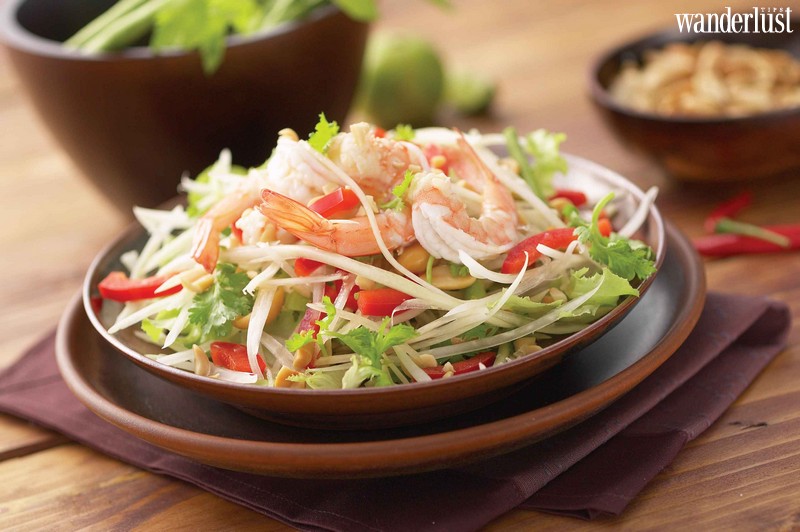 Pretty close to your everyday sausage, Laos sausage is exactly what you would expect from a sausage: coarsely chopped meat mixed well with lemongrass, galangal, kaffir lime leaves and garlic, chillies and fish sauce. This dish is one of the few that would make you order another dish while still devouring the first one. 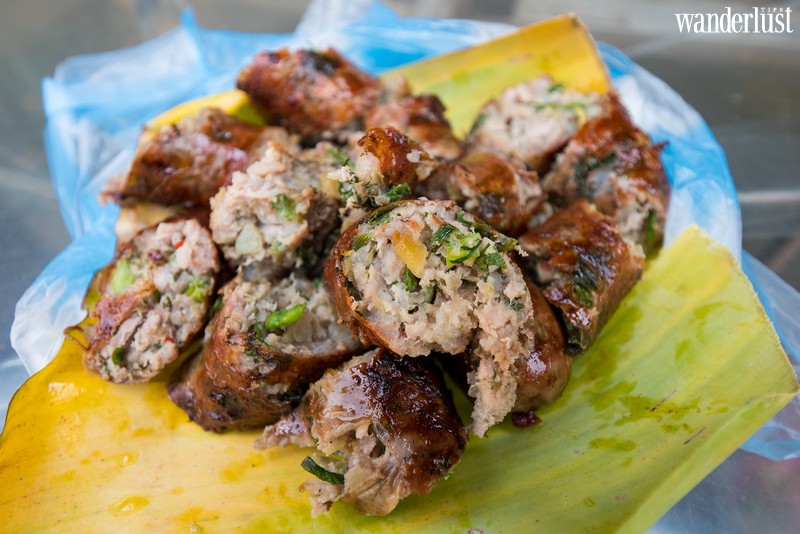 The texture may be less familiar with your sausage, as it can be more brittle, as the meat was chopped, not minced like in many other sausages. But even with that, the smoky aroma and the firm, springy, and juicy; the taste in every bites is just simply astonishing. 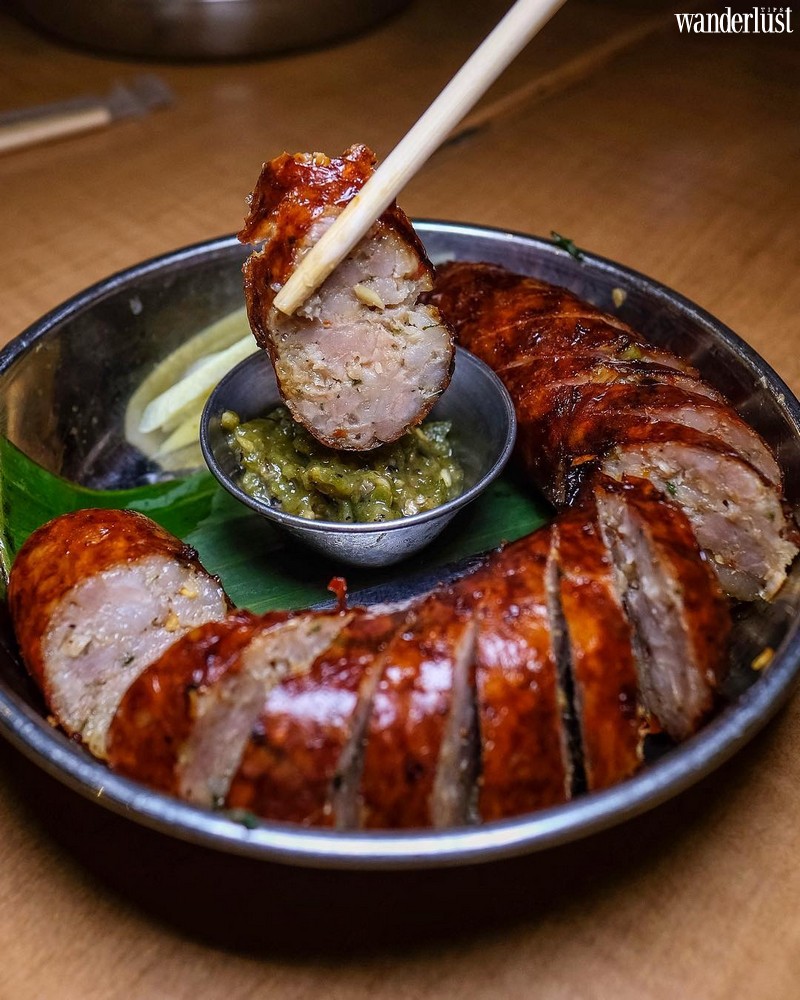 Infused with fresh, aromatic herbs and tender, white fish flesh, it melts in young tongue when you bite in. Paring with sticky rice, and you have yourself a perfect Laos experience wrapped in banana leaf. The dish is perfect for those who cannot stand strong tasting fish, and can also be adapted for those who cannot eat too spicy food as well. 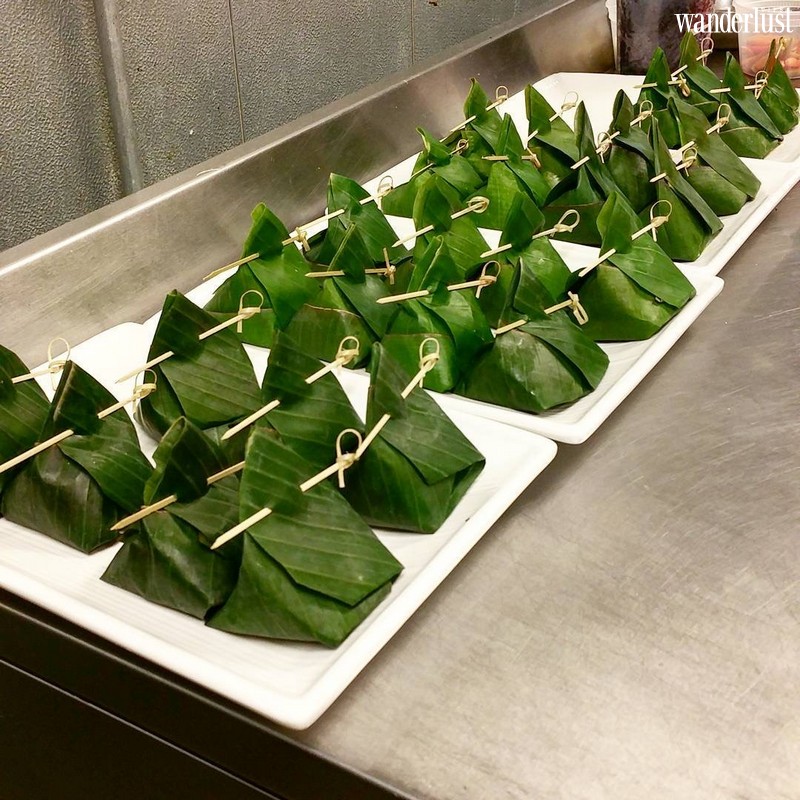 Bathed in many flavourful spices such as kefir lime leaves, cilantro, shallots and just a touch of chillies (or a lot of chillies), the fish, already diced, is wrapped in banana leaves then steamed to perfection. The results is a soft, aromatic, juicy and not at all fishy will certainly meet your expectation. 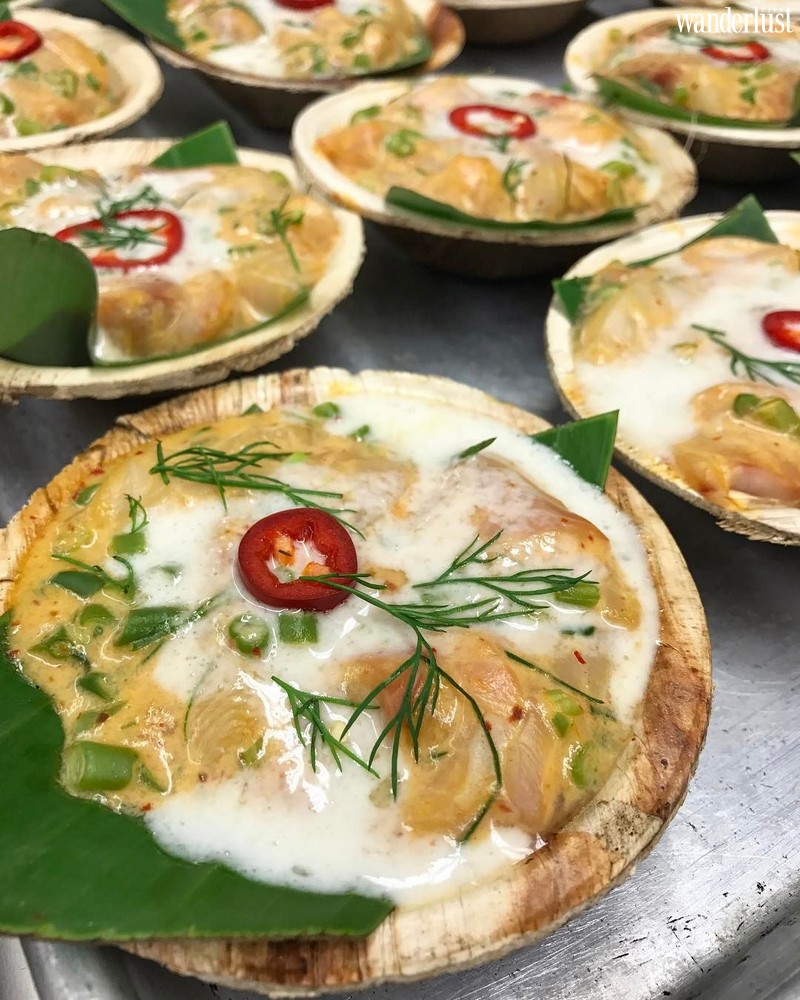 Can be a reminiscent of your barbeque chicken wings, yet different from your everyday buffalo wings, Ping Gai can be found and eaten almost anywhere in Laos. However, it is most famous in the town of Seno, a junction point for truck drivers. The chicken is marinated, then grill to perfection between bamboo skewers. 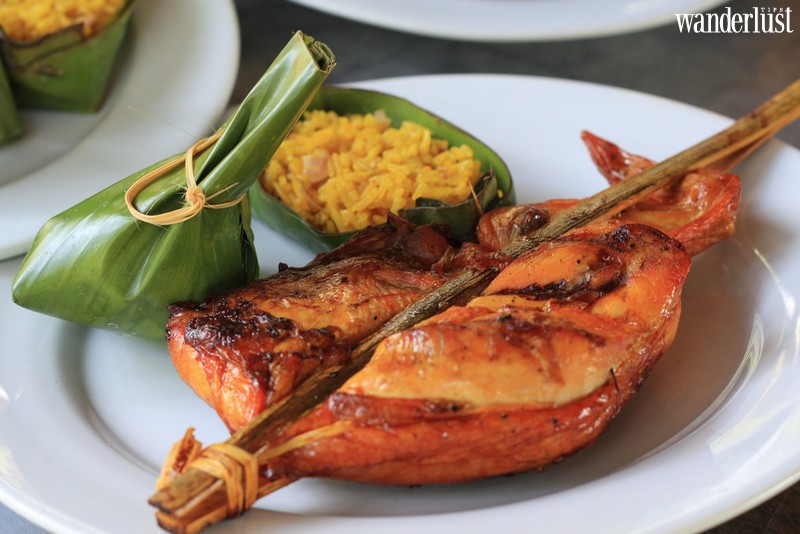 Once a dish used to served Laos royalties, khao poon nowadays has become a popular rice vermicelli soup. It is often made with chicken, fish or pork, seasoned with common Laos spices such as fish sauce, lime leaves, garlic, chillies (a lot) and shallots. Different variations of the dish exist, some with the addition of coconut milk. The dish is popular in Malaysia, Thailand, Indonesia and even followed Laotians to the US. 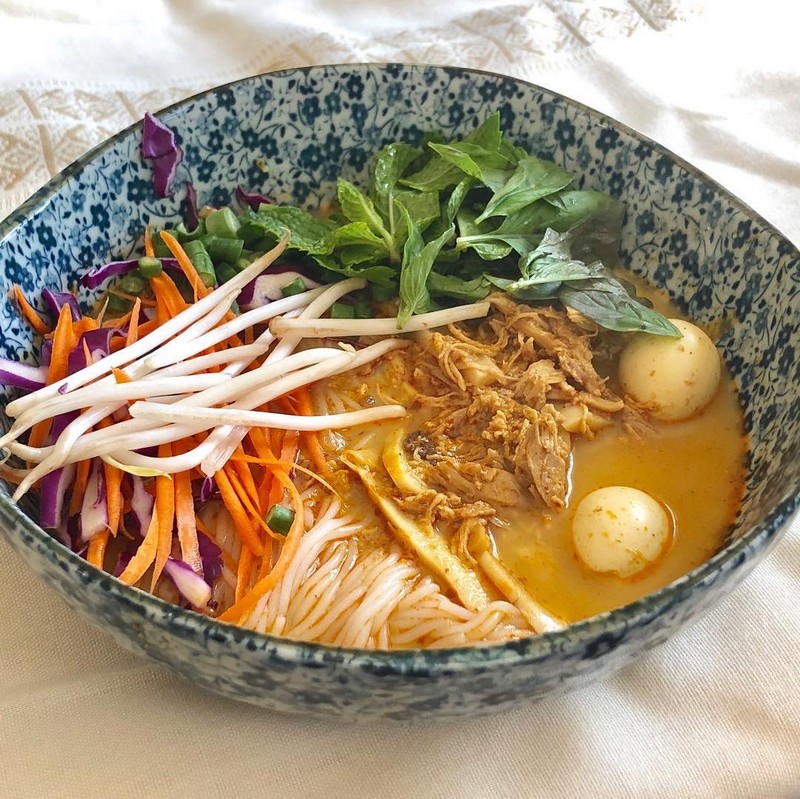 Literally translated as tomato dipping sauce, it is among the most favourite sauces in Laos. Tomatoes are roasted over an open fire, then pounded in a mortar and pestle with garlic, onions and coriander,  flavoured by fish sauce and lime juice. 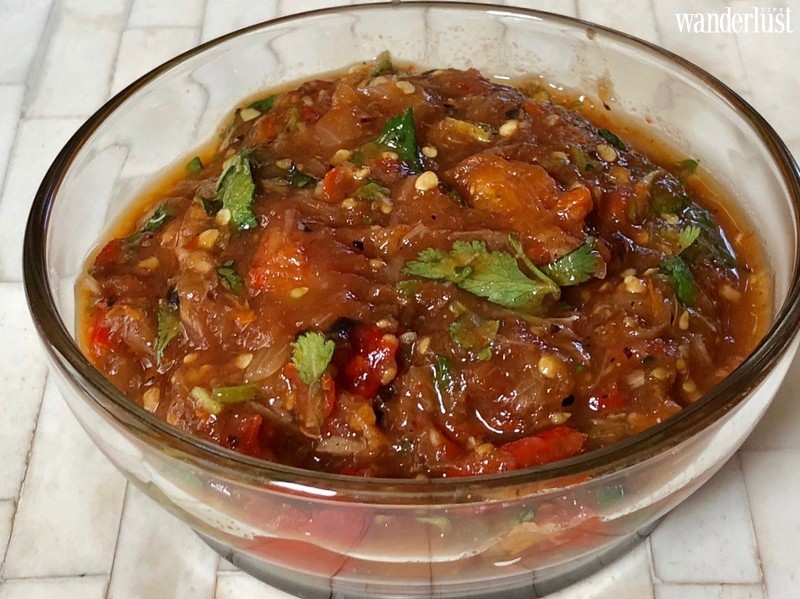 Each regions in Laos has their own variations of the sauce, such as the use of eggplant or bell peppers, but all in all create a perfect dipping sauce that essentially creates the soul of Laos cuisine.