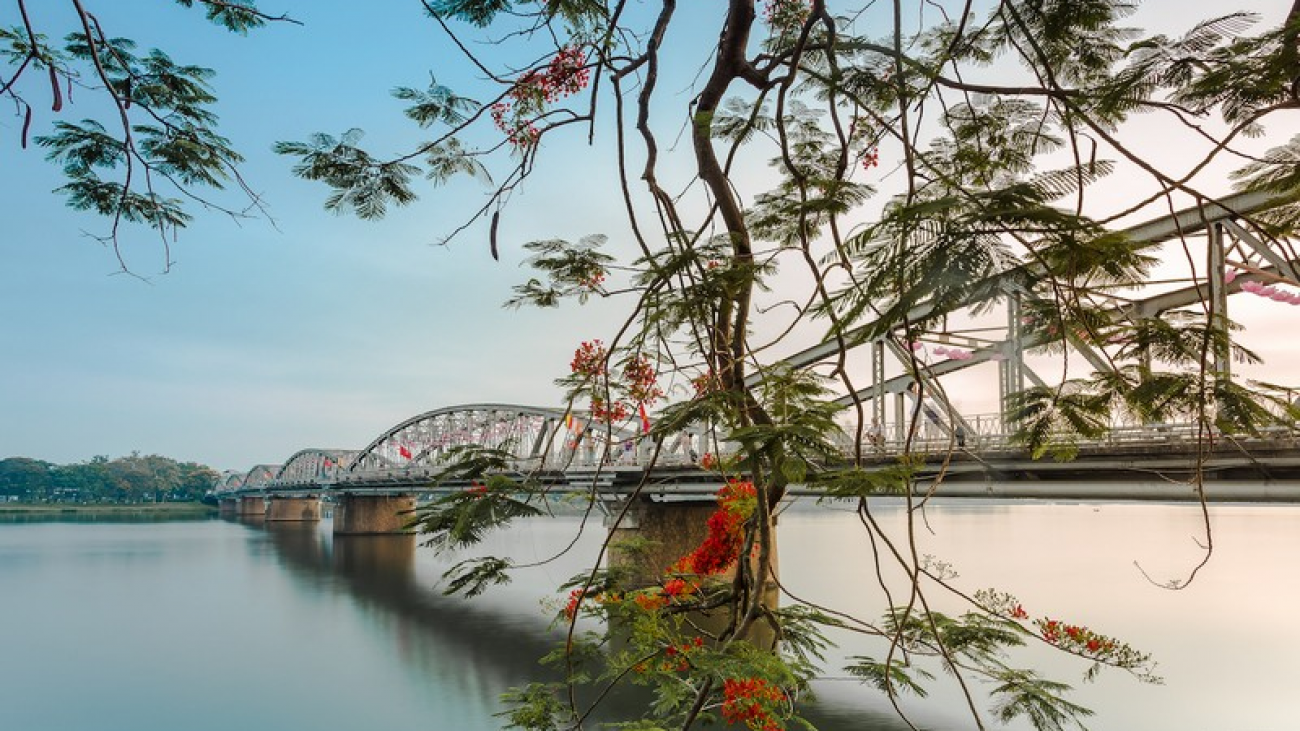 It seems like i share a peculiar fate with Hue – the ancient capital of Vietnam. From the first time i found my way to this magical land when i was a very young man, till the day i came back full of contemplation at the age when people are supposed to get married, i have returned over ten times. But it is interesting that all my trips to Hue are very different from each other. 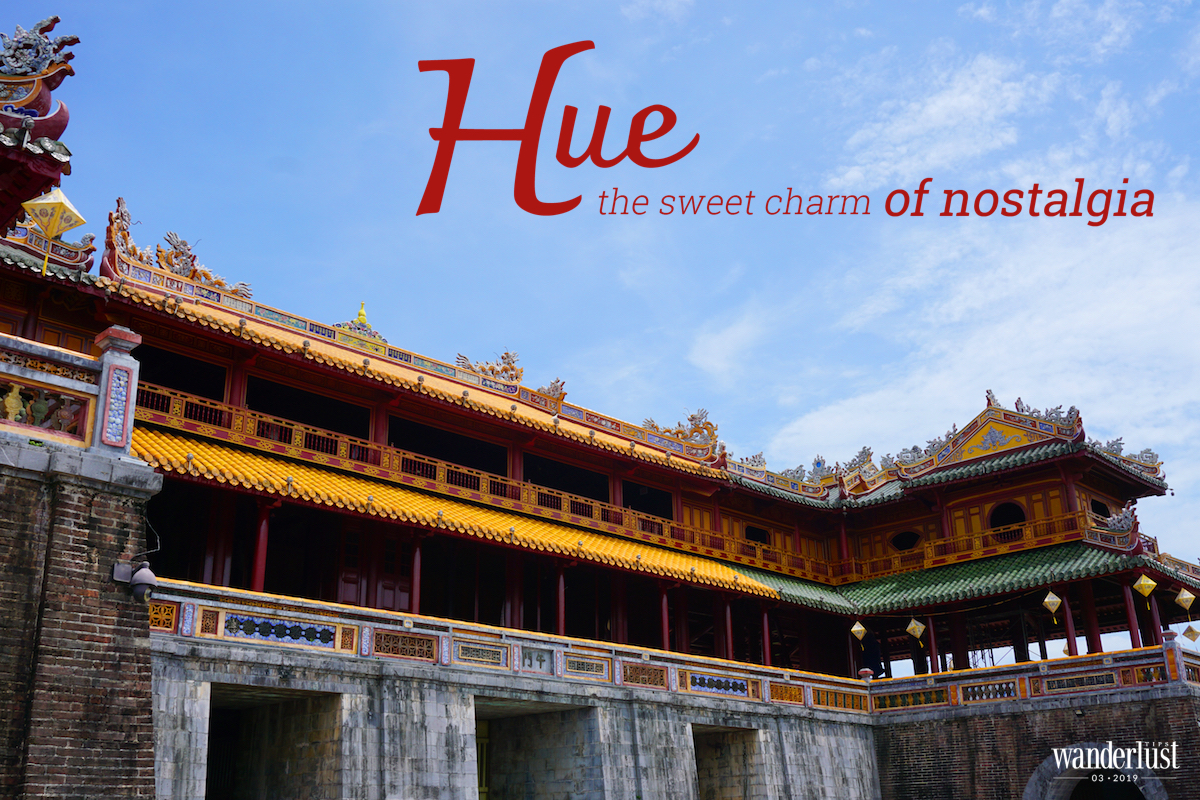 One trip, I came here when I was just a talkative young boy. One trip, I was an inexperienced tour guide clumsily leading a tourist from the North seeking out Vietnamese poem conical hats as gifts for his mother and wife. One trip, I was a lonesome man smoking and walking alone on the small street Huyen Tran Cong Chua at the foot of Vong Canh Hill on a rainy afternoon. One trip, I was a happy man together with my girlfriend as we drove along the Perfume River enjoying the serene atmosphere of the ancient capital. And on my most recent trip, I made my way back to this city with my old friends. Each time, Hue has granted me different extraordinary experiences, but my impression of Hue always bears the colour of nostalgia.

MEMORIES OF THE ANCIENT CAPITAL

The old walls along the streets are steeped in history in this ancient capital. The smell of gunpowder seems to still linger around the old bullet-riddled walls of the Imperial City. The iconic yellow walls covered by green moss, the romantic purple and pink Bougainvillea in the afternoon sunlight or the dusty walls painted with squiggly advertising slogans.

I often wake up early in the morning, walking along the poetic bank of the Perfume River, crossing the breathtaking Trang Tien bridge and finally stopping by a small café opposite Dong Ba market. Leaning against the yellowcoloured wall with its foot covered with the colours of coffee and iced tea, I quietly enjoy a popular iced milk coffee while listening to the bustling sounds of the city. 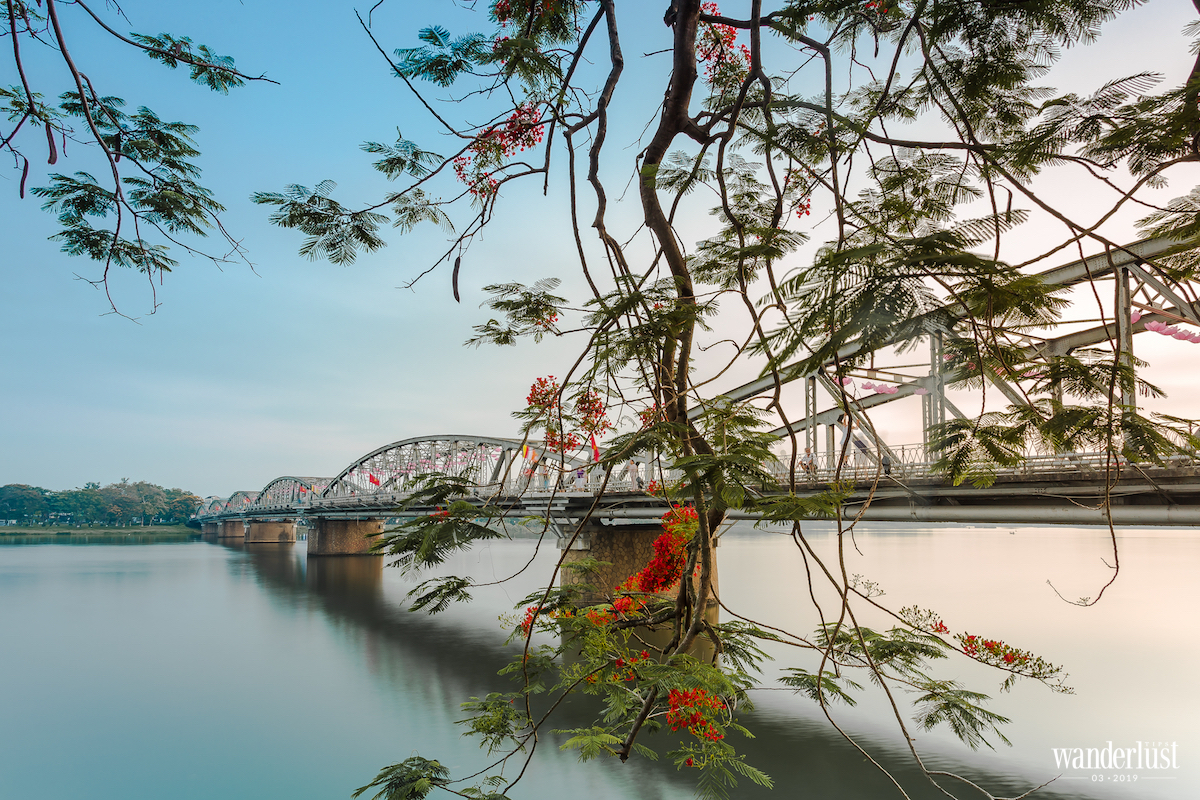 The taste of iced milk coffee has not changed since the time I drank it alone five years earlier or more recently when I sat down and enjoyed it with my friends at the gate of Dong Ba Market. It still has the sweet flavour of the milk, the subtle taste of coffee beans and the smelll of intimate nostalgia.

Unlike many tourists who come to Hue to visit the royal tombs, I just love to ride around the Imperial City of Huế on an old bicycle I borrow from an acquaintance. Because only then, can I truly indulge in Hue’s ancient atmosphere.

I ride slowly along Doan Thi Diem street to one of the “20 beautiful places in Hue” that King Thieu Tri described in his poems, Tinh Tam lake, where “The porch is reflected off the water along with the starry night sky” and the slender Hong Cu bridge crosses the lake to Bong Lai island and Bong Doanh palace featuring its ancient glazed roof tiles. It is truly the sightseeing and resting place of the kings. The exceptionally charming scenery located in the middle of the capital city city is changing is changing every day, as the local houses, restaurants and shops are built more closely to each other. It is also one of the few places where the shimmering history of the ancient capital still exists today.

TRADITIONAL MELODIES ECHOING ALONG THE RIVER IN THE AFTERNOON LIGHT

But perhaps the place where the most authentic features of the city of Hue of the past can be found is on the winding road at the foot of Thien Mu Pagoda, where I took a photo of my tall, thin day-dreaming friend.

At the end of this road is the Temple of Confucius of Hue and also where the old village of Huong Ho was in the past. In front of the Pagoda, the peaceful and gentle Perfume River can be found flowing quietly through the majestic mountains in Binh Dien and on the inside, the Phuoc Duyen tower stands solemnly and quietly. Occasionally, we heard melodious singing mixed with traditional music echoing across the river. All the features blend extremely beautifully together but I felt a sense of sadness lingering in the air. 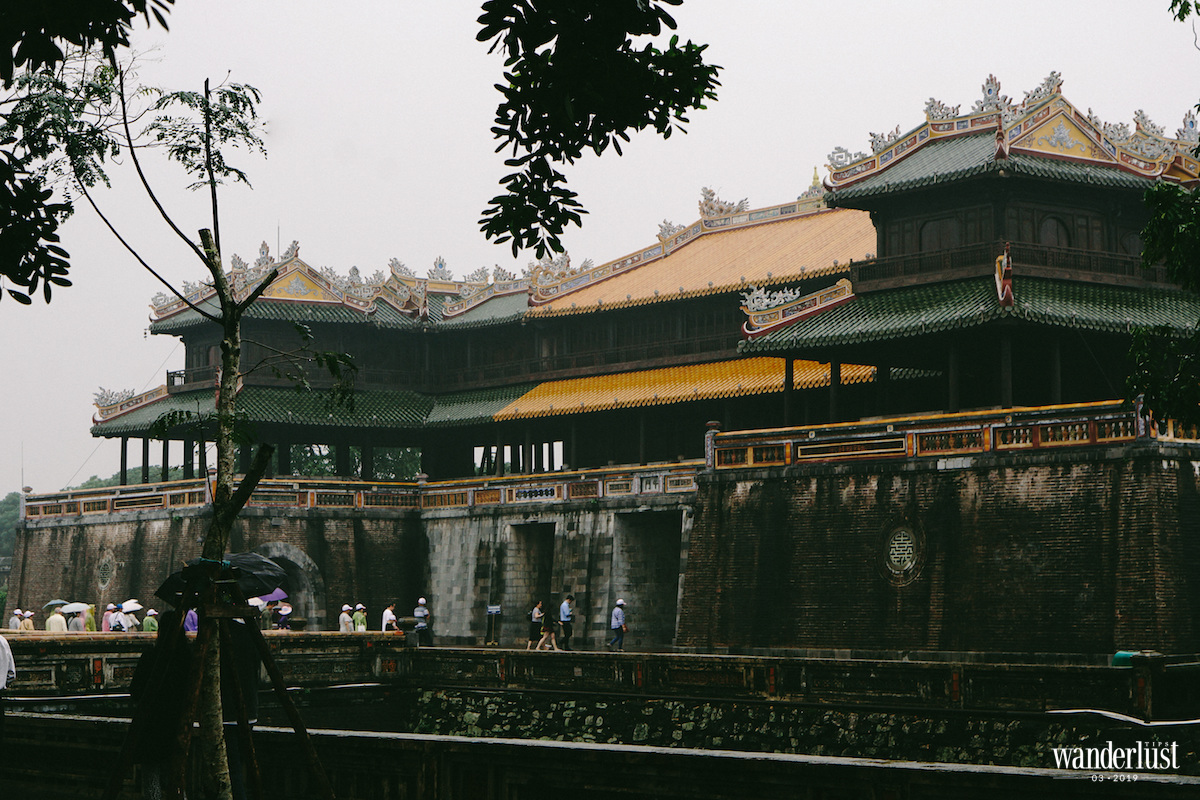 Absentmindedly plodding along the path by the lazy Perfume River on a melancholy afternoon, I suddenly remembered the words of a famous song. “Hue …! …Do you know… What song is echoing from the boat? Is anyone waiting for another to cross Trang Tien…”

I rented a small wooden boat from a poor old husband and wife living by the river at the foot of Thien Mu pagoda and then travelled upstream to Trang Tien Bridge. Perhaps this spontaneous and strange decision brought me the most unexpected emotions during my journey in the ancient capital.

The upstream waves were rocking the moss-coloured boat as the sound of the boat’s engine stirring up the water called out as if it wanted to awaken the quiet river. At that moment, there was only the sound of an old cassette radio of the old fisherman who was bashfully singing the sad melodies of “hò Huế” (Hue’s folk music) accompanying the afternoon sun on the green river. The three of us were all silently sitting on the boat; the old man gently guiding it with a cigarette pursed in his lips while his wife was selecting summer vegetables for dinner. I sat with my eyes looking far away to the centre of the ancient capital, contemplating the impermanence of romance by the Trang Tien Bridge. 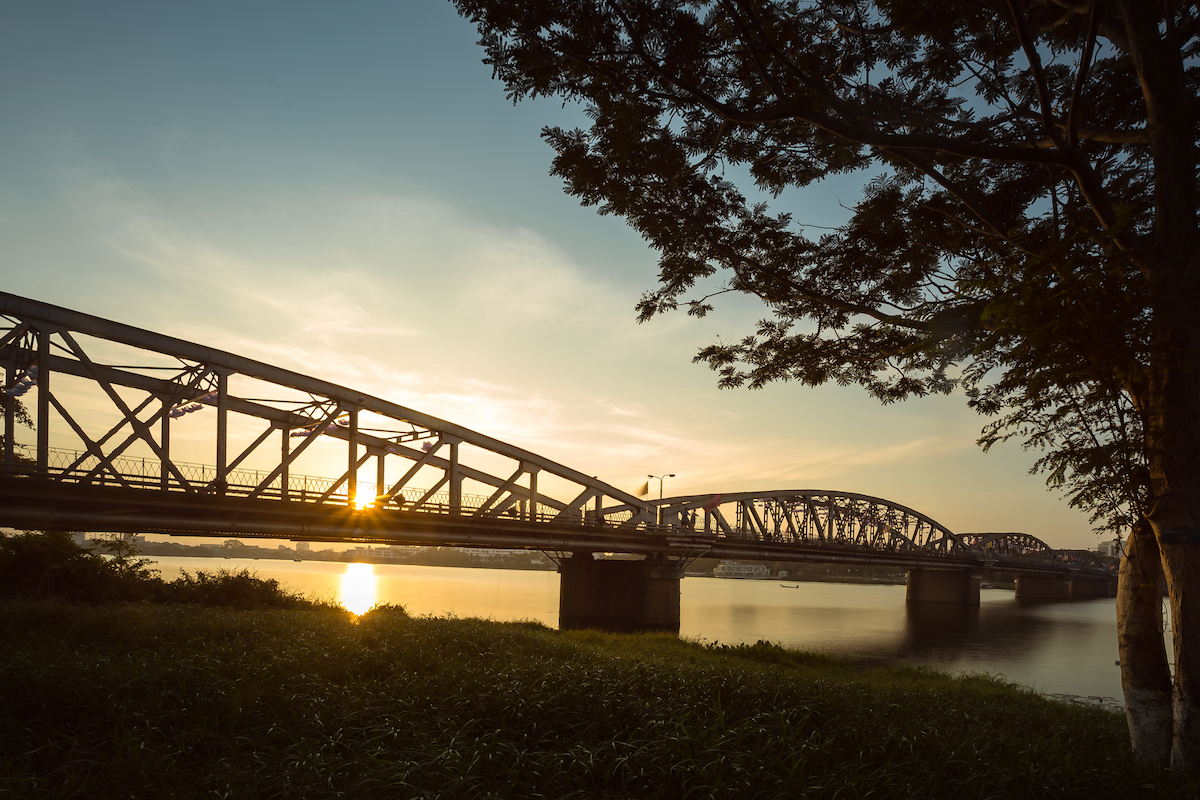 In that quiet space in that inattentive moment, I felt like I was beginning to fall in love with the melancholy beauty of Hue!

LEAVING MY SOUL IN THE MELANCHOLY ALLEYS

One afternoon, I was taking my girlfriend to a sweet soup house in an alley off Hung Vuong Street, which I called the saddest sweet soup house in the world. She asked me why I called it that but I didn’t know how to explain it, so I told her to just to come and find her own answer. 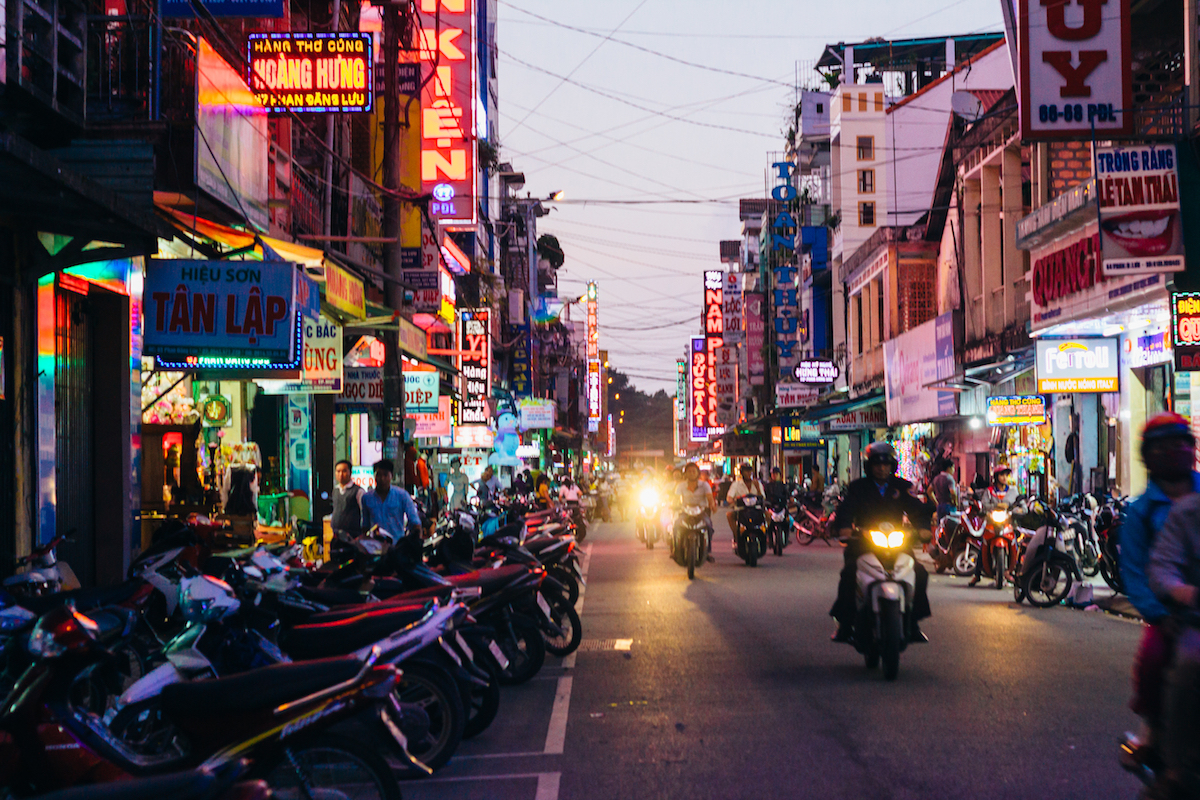 When we walked out onto the busy streets, we felt like it was so different from the space in the alley and I asked her if she had found the answer. She looked so contemplative, a little sorrowful and her eyes looked up to the blue sky as if she had fallen in love with Hue.

I felt the same as her, fascinated by the ancient capital whenever I arrived. Letting my soul dive straight into the silent ancient abyss and becoming speechless from the familiar smell of the plants and river here.

After visiting Hue many times, I found that I was addicted to the feeling of losing my soul to the melancholy beauty of Hue and only when I went back did I realise. I will definitely return to the ancient capital to satisfy my nostalgia for the intimate moments of my past in my heart.

Travelling to Hue: From Hanoi and Ho Chi Minh city, you can travel to Hue by various means such as plane, train, car and even many people like to drive motorbikes. >> Travelling by plane is the most timeefficient option with only a 1 hour flight time to Phu Bai airport in Hue. Currently, airlines such as Vietnam Airlines, Vietjet Air and Jetstar Pacific have regular flights from Hanoi and Ho Chi Minh City to Hue.

>> If you have more time to spare, you can travel by train or bus. Travelling by train from Hanoi to Hue is about 13 hours and about 20 hours from Ho Chi Minh City and although the travel time is longer, you can admire the scenery along the way. A bus takes a similar length of time to a train and the fare will usually be cheaper.

>> Choosing to drive a motorbike or a car to Hue is favoured by travel lovers but for this option make sure you are an experienced driver, have good health and always pay attention to safety throughout the journey.

Moving around Hue: to explore Hue fully, you can use several forms of transport including cars and motorbikes for remote locations and walking, cycling or cyclo in the downtown area. In particular, taking a boat on the Perfume River is an exciting and not-to-bemissed experience.

There are two distinct seasons in Hue: the dry season and the rainy season. The dry season usually lasts from March to August when temperatures can reach 35-40 degrees Celsius and the weather is hot and muggy. The rainy season is from August to January with temperatures generally from 18-20 degrees Celsius although sometimes dropping below 10 degrees Celsius, and from October onwards being the typhoon season. Especially, from the end of January to the end of February, the weather is always particularly beautiful with cooler temperatures and sometimes it is even cold with the late season winds. It is also the time when Sakura flowers bloom. The rainy season lasts from September to December, however, Hue artfully turns this season into a special feature. 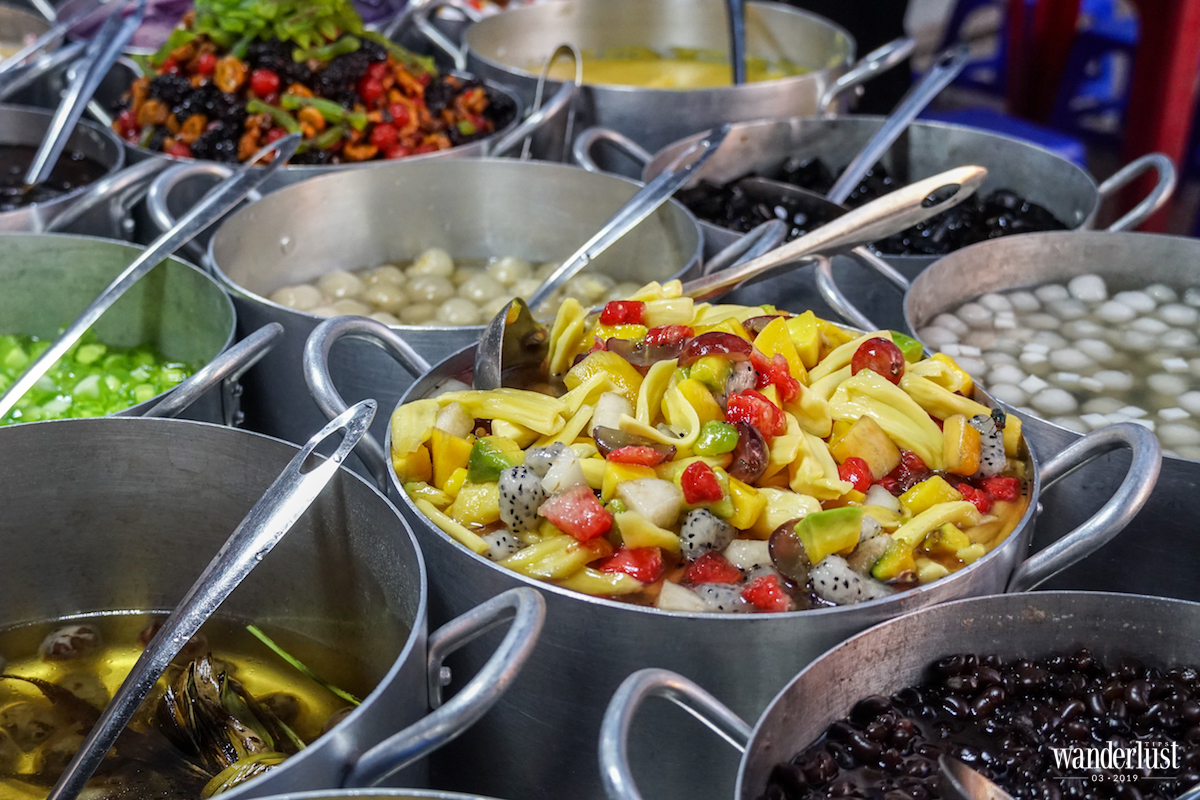 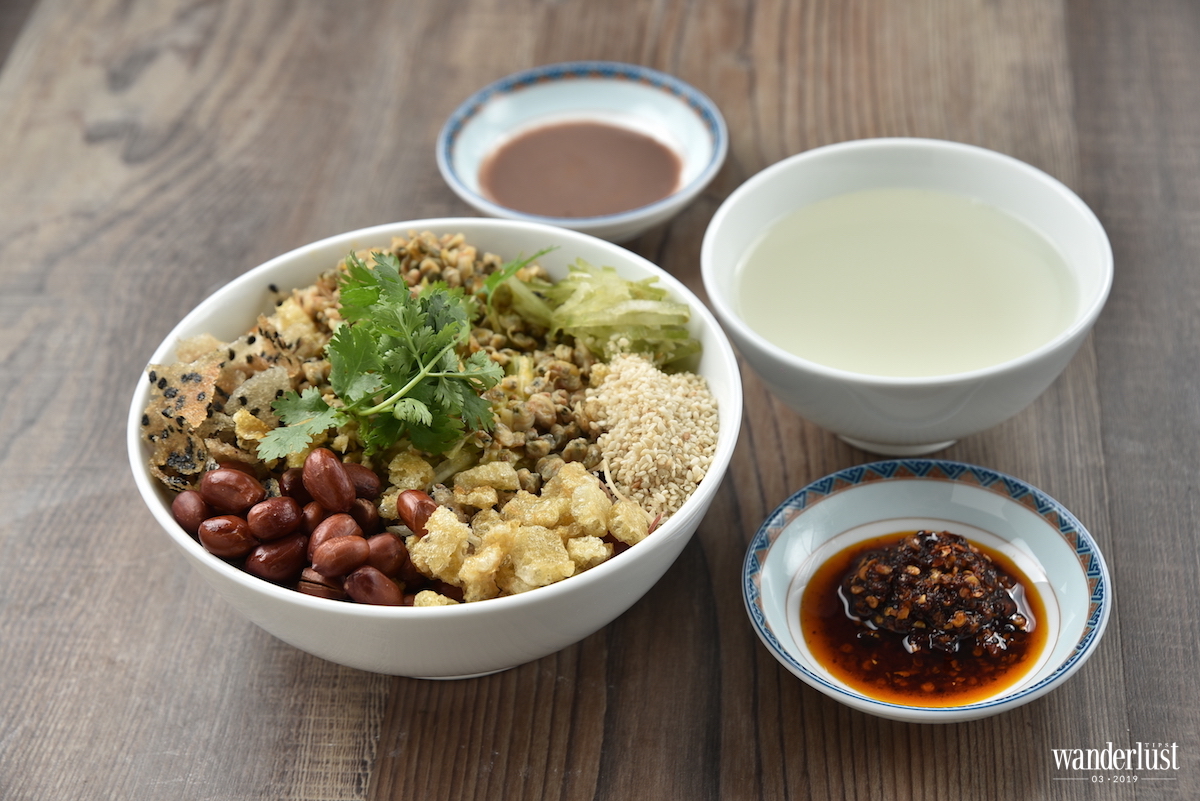