Located in the northernmost part of Vietnam, Ha Giang is a land of magnificent and unspoiled beauty, with steep rocky ranges of mountain, steep mountain passes, golden rice terraces in the harvest season. And beyond your expectation, the charm of Ha Giang comes from the uncharted mysteries of the cultural life of the Mong – an ethnic group featuring very unique identity and identity. 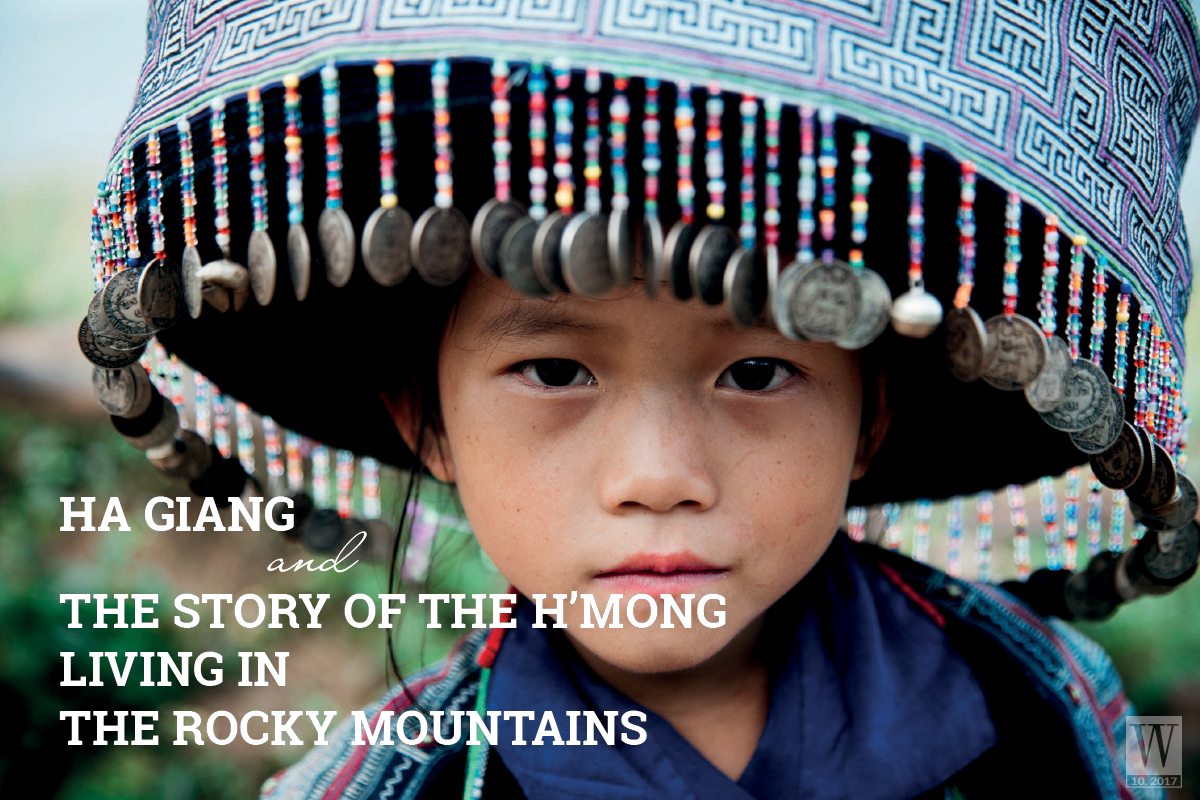 Among the ethnic groups living in Northern Vietnam, the Hmong people present a special existence, a typical example of life adaptation and survival. Said in Hmong’s folk song: “The fish lives in the sky / The birds fly in the sky / Mong people live in the mountains”, the Mong people in Ha Giang have adapted to the life in the mountains at the altitude from 800 to 1,700 metres above the sea level, in difficult conditions but also majestic and dreaming natural beauty.

According to researchers, about three centuries ago, Mong people (also known as H’mong, Miao) were pursued by the Chinese, so they had to flee to the south, which is the mountains of northern Vietnam. The population of Mong people in Ha Giang accounts for the largest proportion, over 31 percent of the population of ethnic groups in the province. There are two major groups, White Hmong and Leng Hmong, that live in the northern districts of Quan Ba, Yen Minh, Dong Van, Meo Vac and two districts in the west like Hoang Su Phuc, Xin Man.

Many people wonder about the living space of Mong people. Why do they choose to live in the Rocky Mountains? Why do not they migrate to lower areas? The researchers assumed that the Hmong living in the high mountains was an historically inevitable choice. By the time they emigrated, favourable places for farming and living had all been occupied. So Mong people had no choice but to choose the top of the mountains. But even later when they had the chance to choose, the adaptability to natural conditions, pride and independence has helped the Hmong to hold on to the high mountains and not leave their homeland. 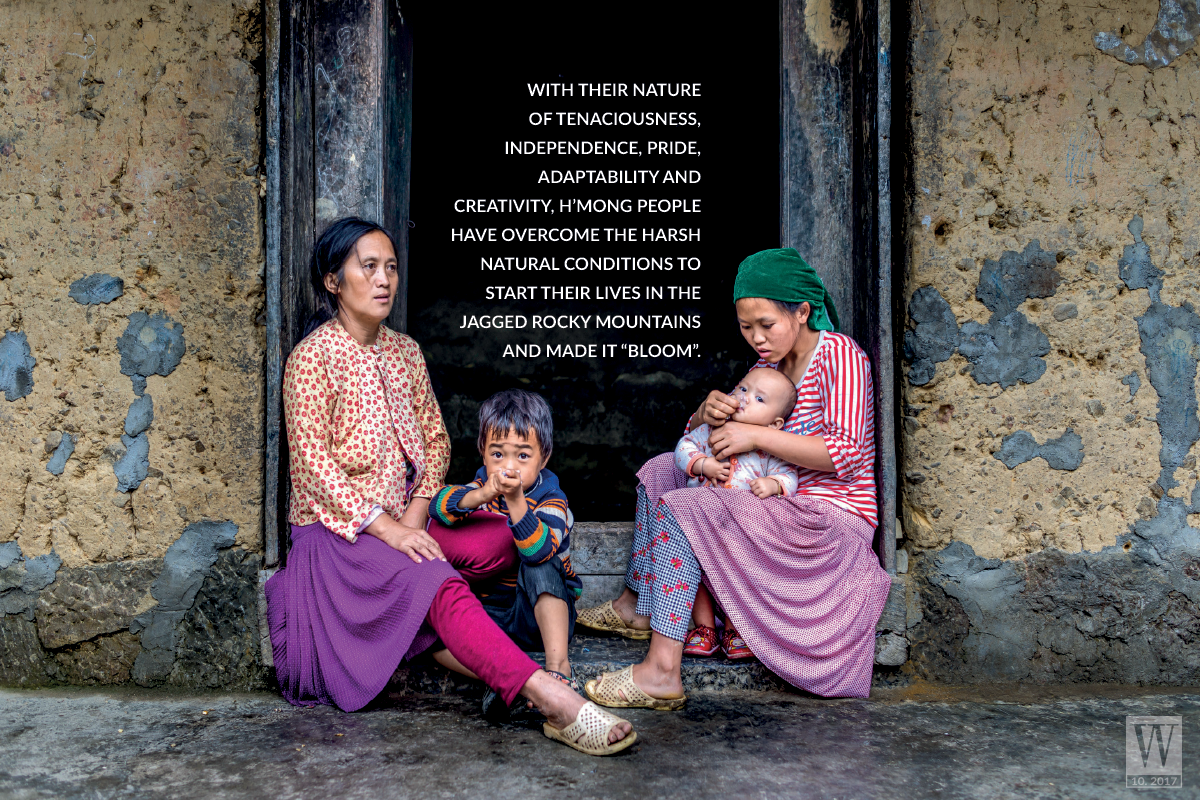 Researcher Nguyen Manh Tien, the author of the book called Mountain Peaks – where we find H’Mong’s personality, has said: “Having lived on the mountain peaks, Mong people with long-standing practices have occupied the highest terrain they migrated to. In Vietnam, the Mong are the owners of highest peaks, which I called the roof of Vietnam.” Therefore, the Mong people have the proverb: “There are no peaks higher than the Hmong’s knees,” and they will even conquer the towering Tay Con Linh mountain.

From the adaptation to living conditions, the Mong people have created new farming methods as well as appropriate cultural conditions to survive on the high peaks. Surrounded by sharp-edged and rugged rocks rising to the sky, they have created a unique cultivation method: planting crops in rock holes. The soils are carried from other places to fill every rock hole; then suitable plants such as maize, squash, and legumes are selected to plant in these holes. The habit of planting food crops in rock holes lying on towering mountain ridges is a powerful and lively demonstration of the Hmong’s excellent adaptability to the hard conditions to maintain life, which is beyond imagination. Their intelligence, logical thinking, and persistence in farming practice are admired by both researchers and visitors. Having witnessed the Mong women who carry baskets full of soil on their backs to the high mountain to pour into the rock niche, we realize how valuable each grain of rice is, containing great effort of the Hmong. The knowledge and techniques of planting crops in rock holes of ethnic minorities in the Ha Giang rocky plateau are documented on the list of National Intangible Cultural Heritage by the Ministry of Culture, Sports and Tourism in 2012.

Furthermore, to retain water and prevent soil erosion after the rain, the Mong have also brought the Cunninghamia from the forest to plant in the village. This kind of tree can withstand harsh weather conditions like sun, strong wind, drought, and freezing cold to survive on the rocky mountain. 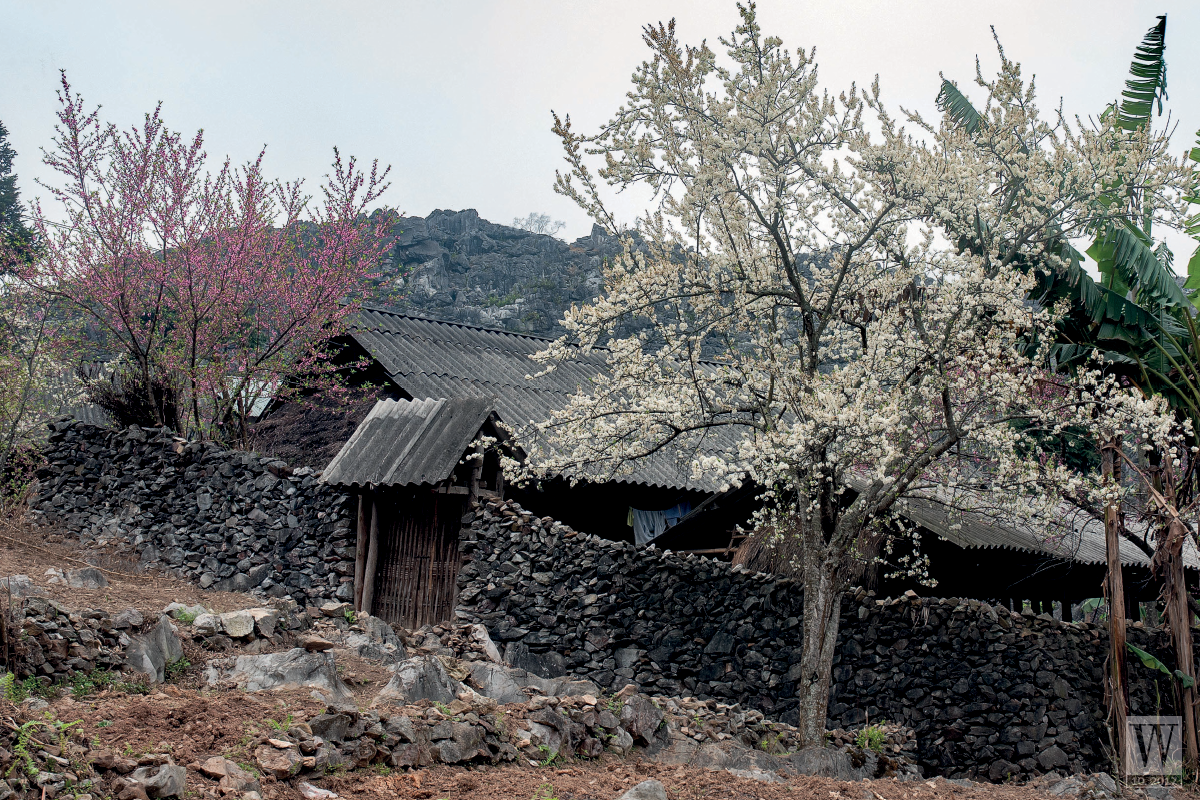 When talking to the guests, Hmong elders have proudly said, “Mature Hmong male must know how to plow, play the khaen and build stone fences.” Indeed, in Ha Giang, 80 percent of the terrain is rock outcrop. Rocks appear everywhere: under the ground, on the roads, and on the mountain peaks. The mountain ranges are hundreds of meters tall with full of sharp-edged and endlessly rugged rocks reaching for the sky.

Therefore, to the Mong people, rock is a part of their life and soul, just like the song “Live in the rocks, being buried in the rock”. Children grow up with the rocks, old people are buried in the rocks when they die. Rock fences mark the boundary of the Mong people’s living space. And the soul of rammed earth houses of the Hmong also begins with the rock fence. Without cement and sand, the rock fence is still solid and sturdy enough to become a protective barrier to the house. The height of the fence is approximately less than 1.7 metres to prevent animals from jumping over, but not too high for a passerby to look inside. Therefore, it can be said that rock fence is also a feature of H’mong architecture. It surrounds the house, which looks like a fortress from the distance. On the mountain peaks in the Dong Van Plateau, you can easily see thousands of these “fortresses”. In some places, houses gather into a cluster; in others, some are scattered as “reigning” the high mountain. In addition, the stone is also a sacred object in the house, a survival tool for H’Mong people. Every H’Mong family has a stone mortar. In H’Mong custom, when moving home, they must definitely carry three things: a woman’s dress, a linseed bag and last but not least, a stone mortar to grind corn and make “mèn mén” (a dish from finely ground cornmeal). 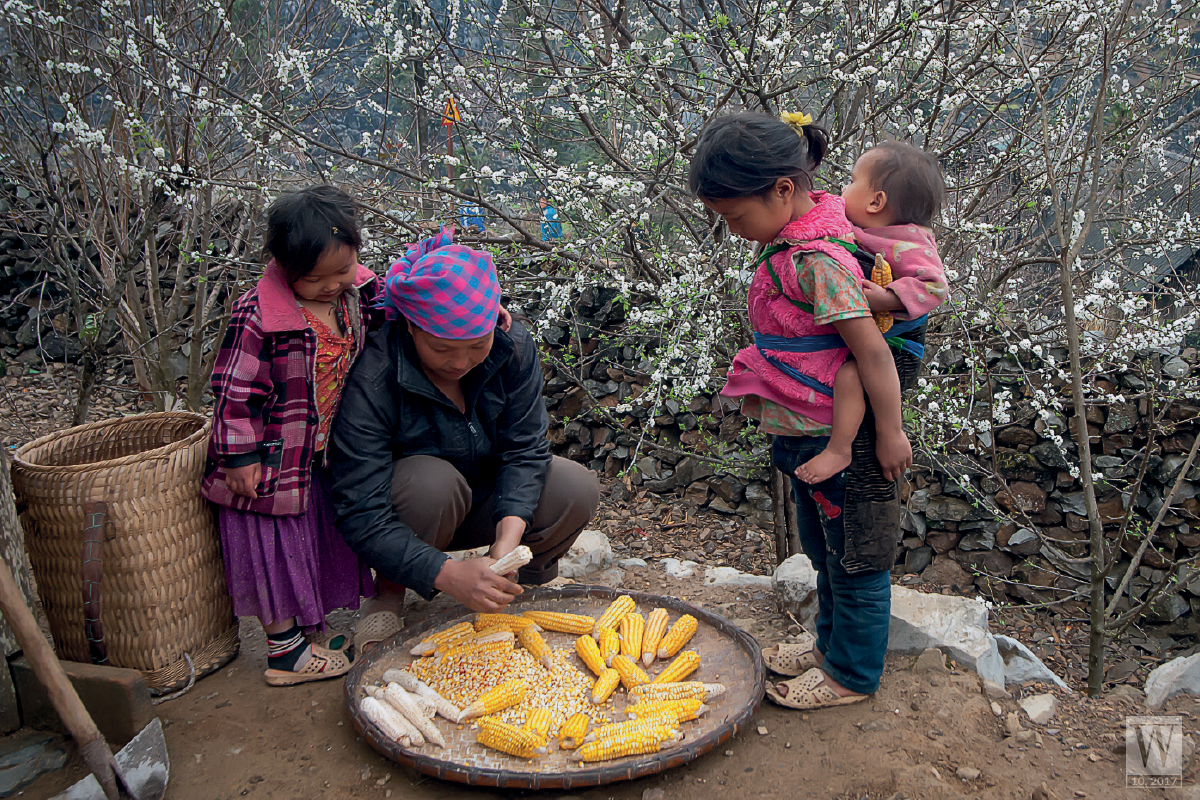 Moreover, the stone is closely linked with H’Mong’s spiritual life because they worship the God of Stone. They often prepare ceremonial offerings to the God of Stone on the first day and the full-moon day of a lunar month to pray for peace. H’Mong customs also include inviting Stone to become adoptive parents for a sick child in the hope that he or she will be protected. The shaman will take a piece of red cloth, burn incense, read the name and ask for a blessing for the baby. People then strip some red thread from the piece of cloth to tie to the baby’s leg and the rest will be tied to the stone. The chosen stone is called the birth stone which must have sharp-edged and rugged top standing firm on the ground symbolizing fertility.

H’Mong people have a faith that the solidity of the stone will help the children to grow up into happy and healthy ones. In this plateau, stones have shaped the H’Mong lifestyle; the rock protects their lives, gives them support, beliefs in life, and train their strong spirit to live in and dominate this land. This is the holy bond between man and nature.

H’Mong people not only have a strong bond with nature but also build a community with rich cultural identity. Besides the purpose of trading goods, they often go to the market to make friends and expand their social network. The ethnic minority marketa appear everywhere on the plateau, from Meo Vac, Dong Van, Quan Ba, Hoang Su Phi to Xin Man, Pho Cao…

Unlike the lowland market, H’Mong’s one has forward fair and backward fair for people to have more opportunity to meet each other. The schedule is based on Chinese Zodiac. For example, if the ethnic minority market in Dong Van is held in the day of Tiger, the market of its neighborhood must be held the day after – the day of Rabbit. This allows H’Mong people to participate in various markets and get more chances to communicate and share with others.
The markets usually open from early dawn when people cannot see others’ face clearly and clouds still cover the mountain. H’Mong houses are often far away from the market. Therefore, from the early morning when the mountain forests are still in deep sleep, H’Mong people already wear baskets on their back to go there. H’Mong girls often wear their most beautiful dresses and brush hair neatly to go to market. They often save glitter shirt, cajuput ten-coloured skirt, and red shoes to wear only on these important occasions and fairs. 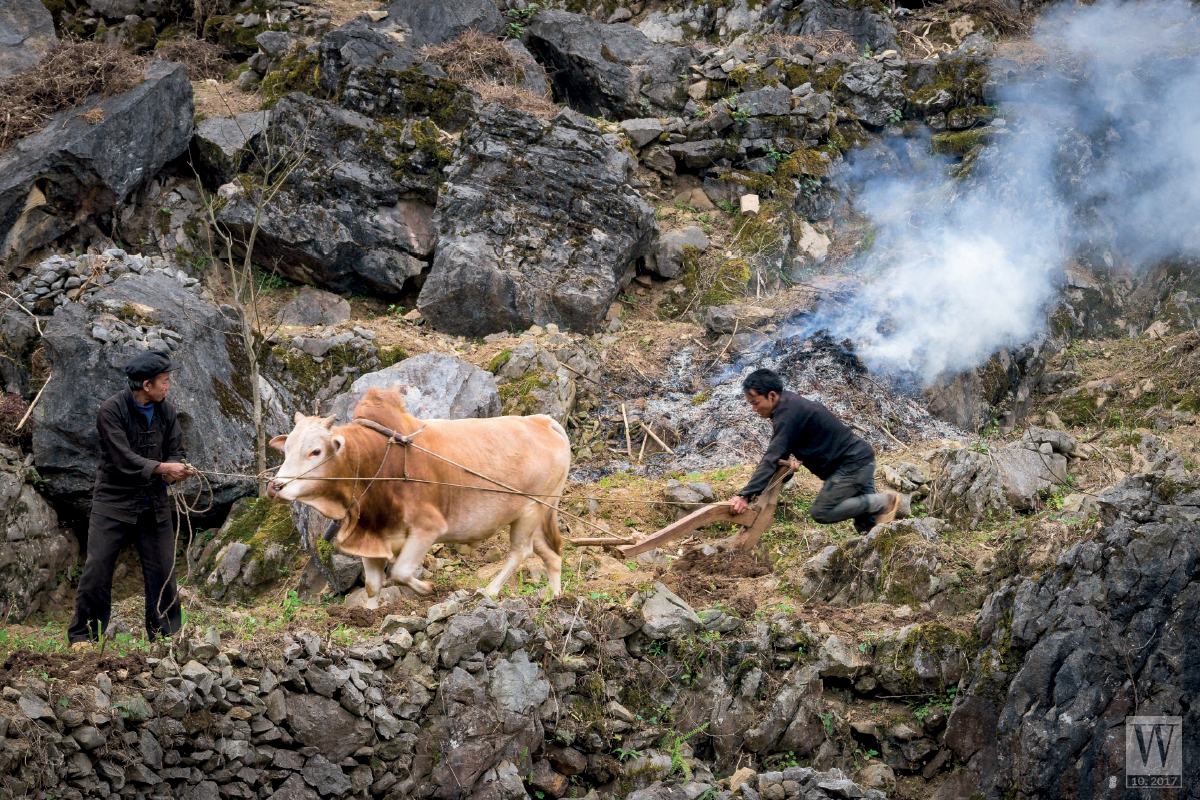 Ethnic minority markets on the rocky plateau are always bustling like Tet Holiday. We can easily hear the sounds of cows, horses, people buying and selling goods or cheering with a bowl of aromatic wine, “thang co”, velvet bean. There are also high-quality mountain products such as honey, mushrooms, vegetables and some modern household items like Television. Especially, in many markets in Ha Giang, people often use objects instead of money for trading. For instance, they can exchange the chicken or dozens of eggs for the hoe or bucket of water … Ethnic minority markets are often noisy but not as vibrant as the lowland ones. Everyone does his/her own works there. The drinker drinks quietly while other people sell and buy things without bargaining.

Next to the trading area, there is a food court with the big, hot woks of Thang Co and aromatic corn wine. Beside short tables and old benches, Thang Co is scooped out and the wine is poured into the bowl. Men eat Thang Co and drink corn wine while women sit next to their husbands chatting with each other, and spinning. H’Mong people go to the market to meet people. Due to geographical characteristics, houses are separated by the mountains so the market is considered their meeting place. Therefore, it is easy to understand that many people come to the market without buying anything, or just bring the chickens to charge for foods. At the market, besides trading, they play the khaen and dance. Until midday when Thang Co and corn wine are all gone and all essential goods are bought, H’Mong people arrange their belongings and come back home after saying a few goodbyes to each other.

Ha Giang market is a place for not only people there but also other ethnic groups and tourists from the lowland. People come here to take a walk, admire the scenery, take a few photos, try a bowl of Thang Co, and sip a glass of corn wine. Though simple as it is, the ethnic minority market has become a “specialty” of the plateau, which even makes many people say “if you have come to Ha Giang without visiting the market, it means you have only experienced half of the beauty of this place”.

“Dangerous, majestic and poetic like the unknown, endless, everlasting mountain peaks”, is what people talk about the living space of the Mong. On the Rocky Mountains, H’Mong people always live with tenacious spirit, constantly adapt to survive while building a united community with distinctive and unique cultural identity.