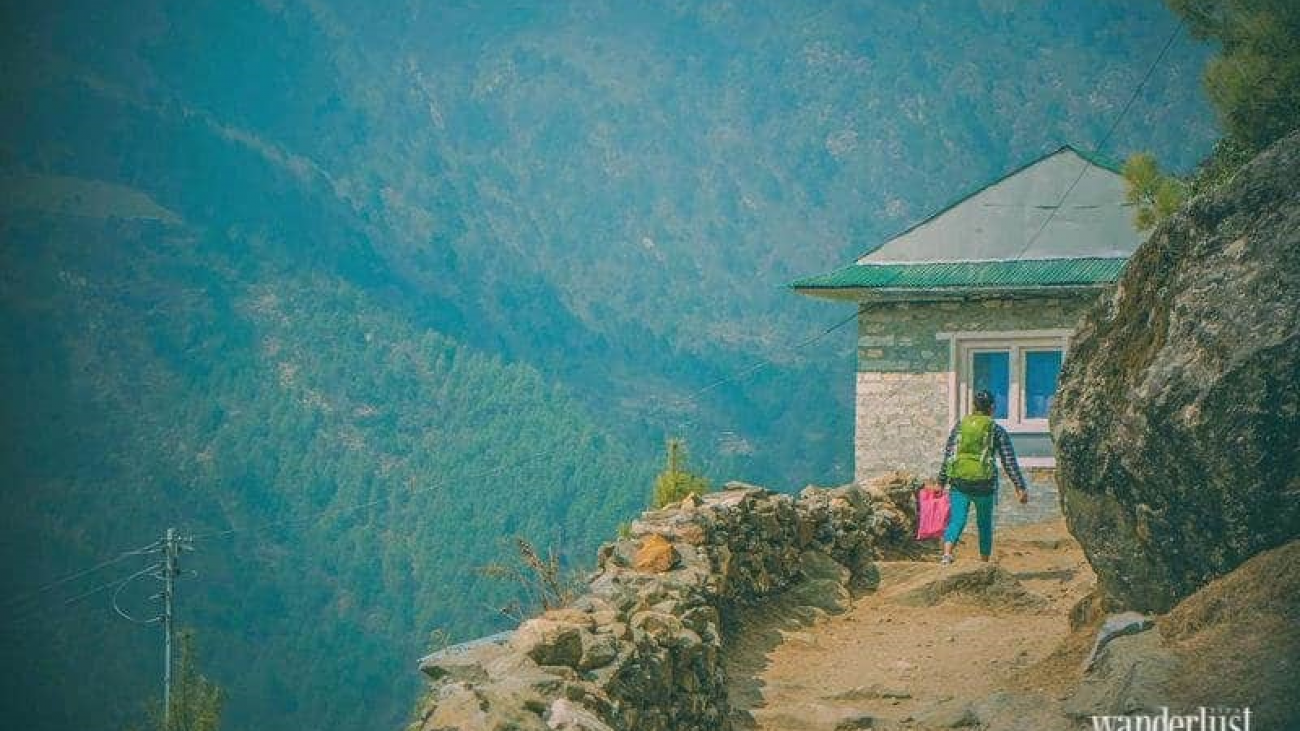 “For me, Everest Base Camp is an unfinished dream, but will always be a beautiful dream…”

A land of mysteries 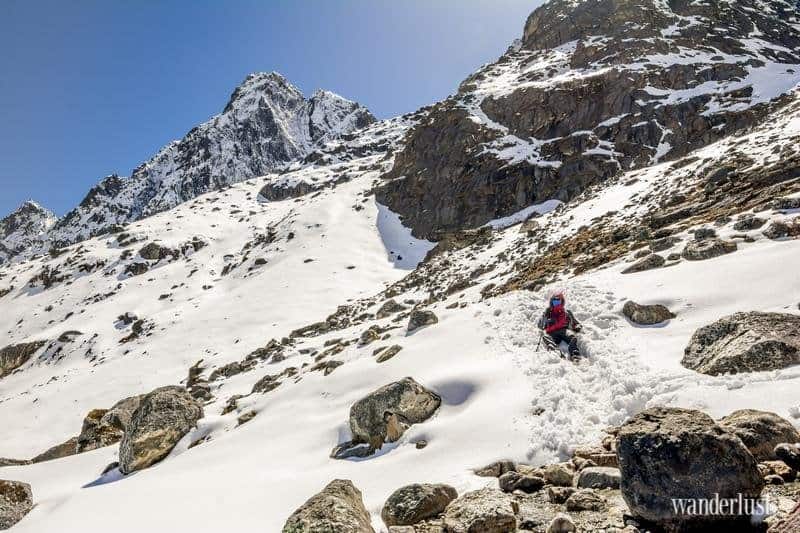 I have dreamed of Everest Base Camp for a while, longing to visit the immortal land of the highest mountain in the world, to soak in the quintessence of the earth and the skies. Hoping to turn this dream into reality, I worked hard to train my physical endurance in preparation for this journey of a lifetime.

I chose to trek from Lukla to Everest Base Camp (at a height of 5,364 metres) – half the height of the mighty Mount Everest. I also intended to stop by Gokyo Lake on the way home. The 115-kilometre, 15-day trek is among the top 10 most beautiful treks in the world, according to Lonely Planet and other travel magazines. This trek is popular because it suits the time and physical abilities of many. Anyone who climbs Everest from the Nepalese side will have to endure this trek before ever setting foot on Everest.

The most dangerous route in the world 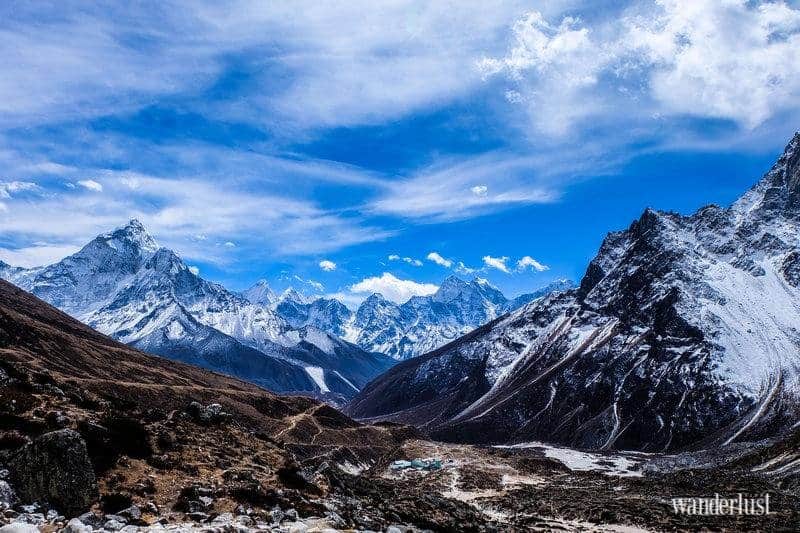 Lukla is a small airport located in Lukla town, Eastern Nepal. The airport stands at an altitude of 2,800 metres. One side faces the mountains and the other, a cliff. The runway is only 800-metres long, and there’s no space to maneuver. The slightest error, or even just cloudy weather, can result in the plane crashing into the mountains.

It should come as no surprise and certainly does not help that this place is regularly cloudy. The pilot lands the plane based on vision alone, and he must accurately judge the cloud-cover surrounding the mountains. Most flights are therefore conducted when the sky is at its clearest. The weather in Kathmandu can be beautiful, but if Lukla experiences bad weather, a week can pass without a single flight. If you’re out of luck, you’ll have to wait until the weather is more favourable.

The flight from Kathmandu to Lukla is only 40 minutes, and the time from landing to coming to a standstill is so short, it can be counted in seconds. I remember seeing the short runway for the first time, I could not take my eyes off it because I was so terrified. My hands gripped tightly to my Bodhisattva pendant, praying that the plane would land safely. After only 10 seconds of tension, the other passengers and I burst out in happiness and relief.

Looking at it now, getting to experience one of the most dangerous routes in the world was an extraordinary once in a lifetime experience. 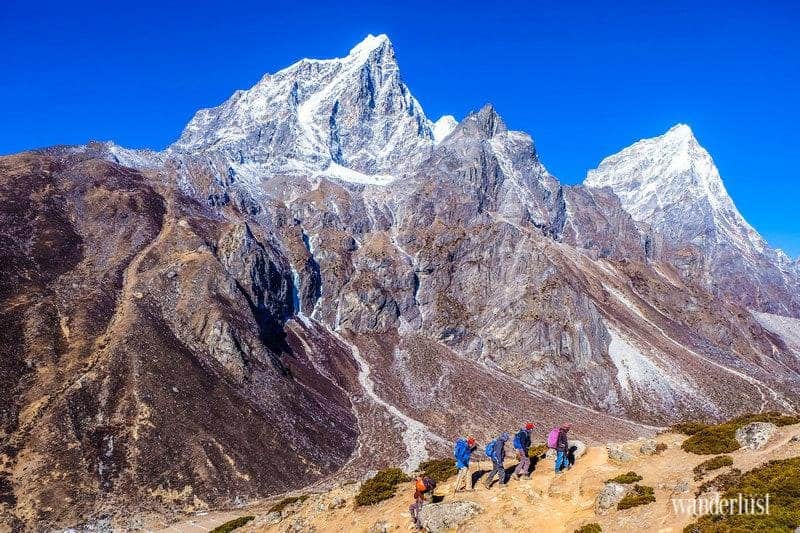 During the first days of the trek, I realized that Everest Base camp was not as much of an impossible dream as I used to think. Despite having to conquer many long and painful slopes, if you have the strength and endurance, it really isn’t such a difficult trek. However, what worried me most was the cold and humidity, the burning sun and the low oxygen levels, which caused me fatigue because I had not yet adapted to the environment.

I tried not to go too fast, choosing a pace that suited my physical abilities, because I knew that going too fast could strike me down with altitude sickness. Going slower also allowed me time to live in the moment and soak up the beauty along the road.

The scenery that welcomed me during the first few days was vibrant greenery adorned by small villages set on the banks of the Dudk Kosi river, with fields of bright gold flowers, green potato stalks, romantic trails covering the mountain slopes and tiny, yet beautiful homes situated on the mountainside adorned with floral terraces.

Along the way, I encountered a few stones, large and small, carved with the prayer “Om mani padme hum” and Buddha eyes statue that calmed every passerby.

In the days following, once I had ascended past an altitude of 3,500 metres, the landscape changed remarkably. The greenery disappeared, and a wild, barren landscape replaced it. What was left were the dry bushes of lichen, imposing snowy mountains, and white glaciers. The Himalayas still mesmerized me with their striking snowy mountains – Ama Dablam, Thamserku, Taweche, Nuptse and Lhotse, to name but a few. The mountains were often covered by clouds, and the brilliant sunshine gave them a strangely magical and seductive aesthetic.

The image that followed me throughout the journey was the five-color Lungta prayer flags fluttering in the sun, beside the headstones. “Nepalis believe that the prayer flags will bless the departed soul and help them reach heaven, and mantras will be blown by the wind to spread goodwill and compassion into all pervading space.” – Janak, my guide answered my curious eyes. Whenever I walked past a gravestone, I stopped to pick up the surrounding small stones, and placed them on the graves to show my respect. Never have I felt that such small, insignifcant stones could feel so magical. 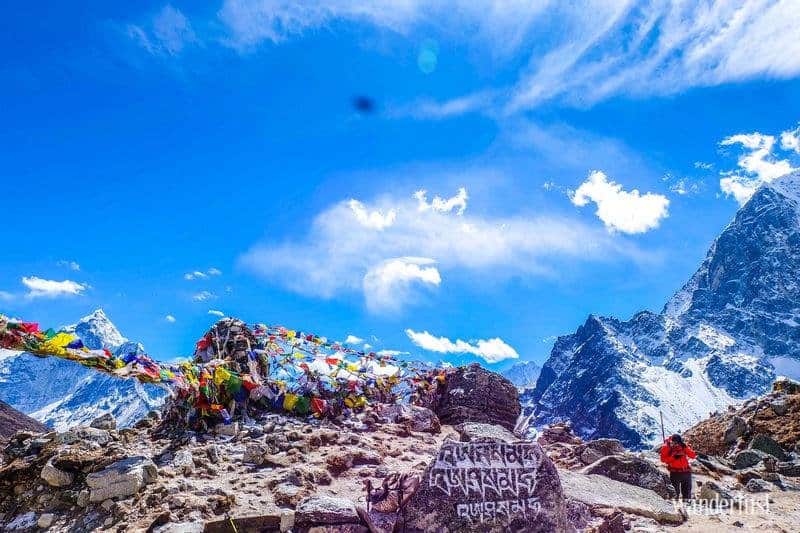 Throughout the journey, I continually found myself at the receiving end of the warm smiles and the, ‘Namaste!’ greetings of the porters, who were sweating in spite of the freezing cold. I also witnessed yaks – a kind of long-haired bovine – climbing the mountains, stopping frequently to catch their breath, which made everyone feel sorry for them.

Contrasting images along the journey reminded me that the Himalayas are not as poetic as one often imagines. Bright sunlight burns faces, darkening them to a deep brown from the solar radiation, and the freezing cold chaps lips.

Learn to face and accept the risks 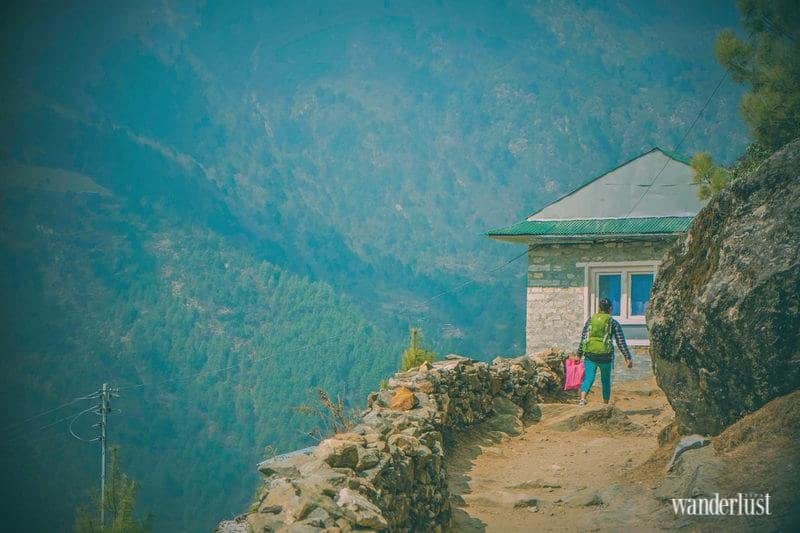 Getting lost twice turned out to be a good opportunity for me to explore more interesting stops, unseen by many. Thanks to this, I learned to deal with unforeseen circumstances.

Altitude sickness is a life-changing experience that I will never forget. It overwhelms you and hinders your progress unpredictably. I began to feel that my destination was within my reach, but then at the last rest stop at Gorakshep (A height of 5,129 metres), my body started to show the symptoms of shock, and after only 3 hours, I was at stage 3. I was forced to abandon the remaining trek and descend the mountain in the freezing cold of night.

Later, I found out that altitude sickness can be experienced by people of all ages and physical condition. At first, my symptoms were only mild headaches and shortness of breath, but they became progressively worse with a pounding headache, nausea, vomiting, fever, and loss of consciousness. These symptoms would continue to get worse if I were to climb higher. In this situation, the best solution is to descend the mountain as soon as possible. You have to leave the journey of your dream, but you will live to fight another day and it is always wise to listen to your body. At its most severe, altitude sickness can lead to death and this is certainly not a risk worth taking. When you start the journey, you need to accept that this may happen. However, one thing I learned from this experience is that you should always drink plenty of water. I was advised to drink at least 4 liters of water per day, but I failed to listen. As a result, I had to face the consequences: giving up the dream right at the final hurdle.

As I stood on the edge of a cliff in Gorakshep, before leaving a weak and feeble patient, I felt so small among the immense mountains and skies. With blurry eyes, I realized at that moment, that I was small, weak, and inept. The Himalayas presented me with the contrasts in my own character: me at my strongest and bravest, and also me at my smallest and weakest. Above all, I realized that the great Himalayan mountain range was real. It’s not just a beautiful and romantic destination where people can easily go to relax. Despite not reaching my end goal, the journey gave me wonderful experiences with people, life, and the world around me.

For me, Everest Base Camp is an unfinished dream, but it will forever be a beautiful dream…That’s how I marked my 25th year on earth.