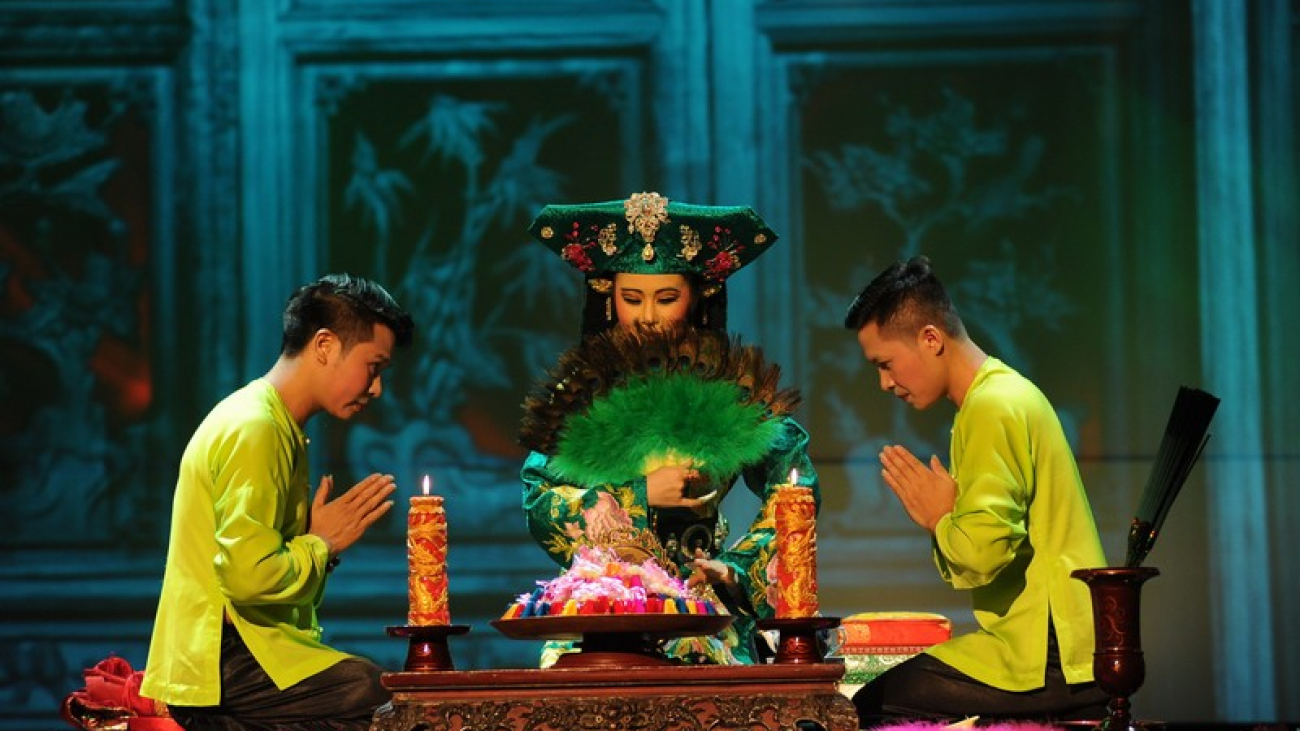 (#wanderlusttips #Vietnamtradition #Tuphu) It is difficult to imagine the “len dong” (séances through mediums) ritual when seeing it as a performance on stage. Being quite a sensitive ritual in places of worship, including temples and shrines, any replication must take place on spiritual and cultural stages. Tu Phu stage offers its audience a realistic, virtuous performances and even complete with exquisite details and gorgeous décor. The performance is a spiritual journey that takes spectators back thousands of years to learn about the religious history of Vietnam. 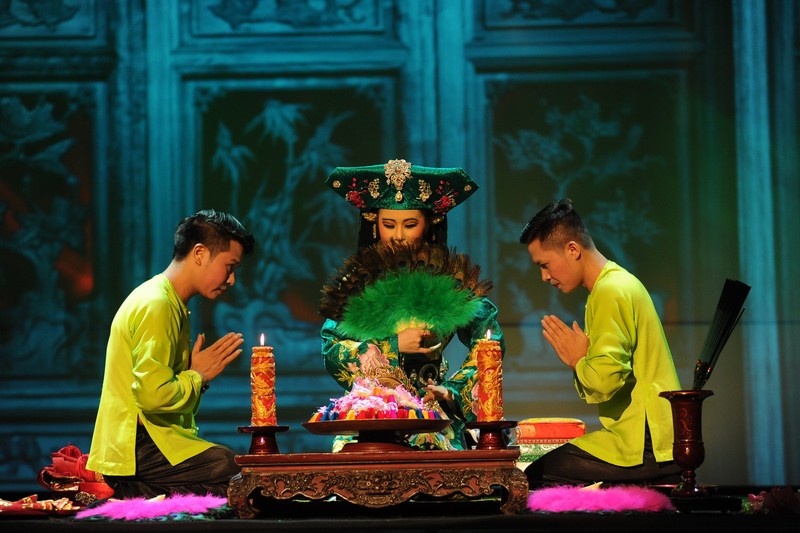 In terms of hierarchy, below the Mother Goddesses are 10 mandarins (Quan), 12 ladies (Chau Ba), 10 princes (Ong Hoang), 12 princesses (Co) and 10 young princes (Cau) as well as numerous other saints.

The Mother Goddess is the highest symbol of Vietnamese religion, representing humanity, the country’s origins and patriotism.

Tam Phu (three realms – excluding Earth) worshipping and Tu Phu (four realms) worshipping have been submitted to UNESCO to be recognised as an Intangible Cultural Heritage of Humanity. At the end of this year, the profile will be considered at the eleventh session of the Intergovernmental Committee for the Safeguarding of Intangible Cultural Heritage.

“Each Mother Goddess reminds us of the close relationship between humans and nature,” says Ms. Katherine Muller-Marin, the representative of UNESCO in Vietnam, at the premier of the play “Tu Phu”. “Mother Goddess Worship is ingrained in the ideology of the Vietnamese people, it honours and enriches their human values such as good conscience and compassion”. This is the reason that this unique ritual needs to be preserved as a legacy for future generations.

A spiritual journey connecting the past and the present 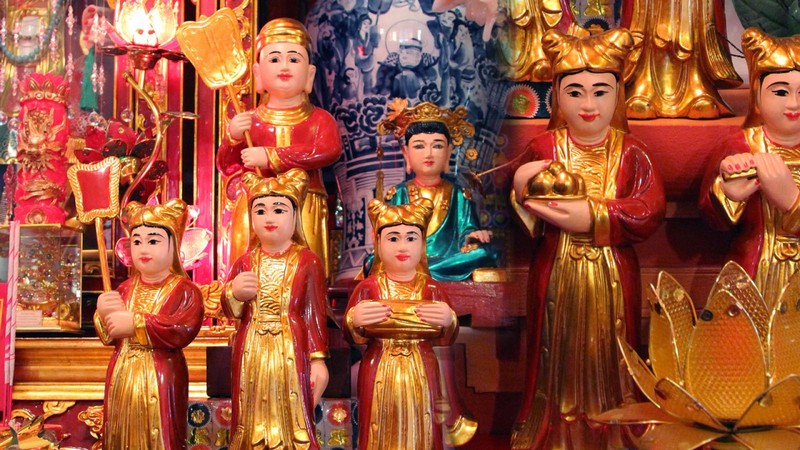 The performance opens not with light, music, or colours of the gorgeous costumes, but with complete darkness, deep silence and a vague scent of incense. But the smoke is too subtle to clearly identify. The darkness, the silence and the subtle smell of incense send our minds into a meditative state. It is difficult to replicate the feeling of a real life “hau dong” ceremony, simply because the festive atmosphere is missing when a crowd of spectators is cramped in one space.

Before your eyes is a layered stage. Decorating the outermost layer are a couple of copper cranes, the sacred symbol of nobility and spirituality that is present in many Vietnamese pagodas. The middle layer represents a meticulously carved shrine, and the inner corner is a set of timeworn traditional wooden doors. The inverse set makes the audience feel as if they are on the inside of those doors.

The medium and two singers slowly walk on out on the stage amid a cloud of smoke. The silence broken by their songs and the echo of the ring of the bell.

There are 36 trance sessions; each represents a deity in Mother Goddess worship. More importantly, in Mother Goddess worship, each deity represents a different cultural trait and has a different personality. They are embodiments of real historical figures who were glorified to become deities after their deaths and have since become the spiritual fulcrums leading people towards better lives. Deities in Tu Phu worship are not necessarily products of people’s imaginations, but their origins are deeply rooted in the history and cultural beliefs of different regions. This has created the diverse beauty and historical depths of the séance rituals, during which a medium incarnates the different deities and spirits. The sublime performance of the medium and Chau Van songs, which vary in tempo and tone blend together into a rhythmic and unified performance.

The second trance session, which features one of the 12 Chau Ba (Ladies) of the Forest (Nhac Phu), is the first session presented in the play. It tells the legend of princess Le Thi Kiem, wife of Ha Van Thien, of the Tay ethnic group, who ruled Dong Cuong. She was the incarnation of Mau De Nhi (the Second Mother Goddess), a princess who came to the material world to rule the forests and the 36 lands.

The lyrics of the songs go: “The winds in the sky shake up the trees. The fish swim down under, and the birds fly home. Night falls; the moon dies and the stars disappear. Short and tall roofs fill the skyline. The red mountains on one side, the blue sky on the other.” The heartfelt lyrics alongside the melodies of drums, a moon-shaped lute, the monochord, and flutes, take the audience’s imagination to nirvana. The Chau Van song tells the life stories and praises the excellence, merit, and personalities of the deities when they were alive.

During the medium’s incarnations of the deities, the singers carefully and skilfully assist the medium change her outfit according to each session. The outfits of the medium are so beautiful they leave the audience in awe.  The second lady of Nhac Phu (the Forest) wears a green outfit, representing the trees and the forests. With every line, the singers slowly tie the green scarf around the lady’s head, and carefully and smoothly place each jewel and each flower on her outfit. Just like that, after with the headscarf the outfit is complete and the Mother Goddess of the Forests dances along the melodious music and singing. At times, she dances without any props, and then starts moving charmingly with a fan, and at times dancing virtuously with a flame. Her charisma exudes perfection, beauty, nobility and power. As the singers and the audience cheer and the music gets livelier, the performance gets more sublime.

The trance session for Ong Hoang Muoi (the Tenth Prince), who according to legend was the son of The Dragon King of the Eight Seas in Dinh Ho Cave, is equally impressive with its dazzling royal costume. When he was alive, the prince was Nguyen Xi, a brilliant general under king Le Thai To. He helped the king defeat Minh invaders and was assigned to defend the land of Nghe An in Ha Tinh. The medium then fully incarnates the prince, with his charisma and pride, and dances definitively with his flags, representing his quests to expand the country’s territory. His eyes shine with mightiness in battle, and sometimes reflect the emotion of admiring the country’s immense territory, and are filled with pride when he writes poetry during a silent night, admiring the moon and drinking wine.

A festive atmosphere fills the end of the play, with the trance session of the Little Princess of the Forest, an adorable and charming girl dressed in an outfit of the Tay ethnic group, with many exquisite decorations. As the medium dances with an umbrella or a fan, laughs as she dances to the cheerful music, the entire audience claps along to the beats. The medium’s incarnation of the Little Princess is decorated with the trees, the forest and animals in the backdrop. The audience becomes even more excited when the medium starts distributing lucky offerings. When the play ends, the audience is left with an overwhelming feeling of joy from the musical and visual feast telling the stories of history. Temporarily, they have lost their sense of reality, of the present, and are lost in a performance that seems like a real religious ritual.

Despite originating from folk culture a long time ago, the Mother Goddess worship and the Tu Phu worship bear a significant meaning to the present and the future of the country. They honour the connection and harmony between humans and nature, with the earth, the forests, the sea and the rivers, and honour the role of mothers and women in general, according to Mr Pham Sanh Chau, the General Secretary of the Vietnam National Commission for UNESCO.