[Wanderlust Tips Magazine December 2017] Towering and long slopes, communal houses where villagers gather, dusty red roads, or spectacular slopes with flowers, that is the Vietnam Central Highlands that I always yearn to return to. 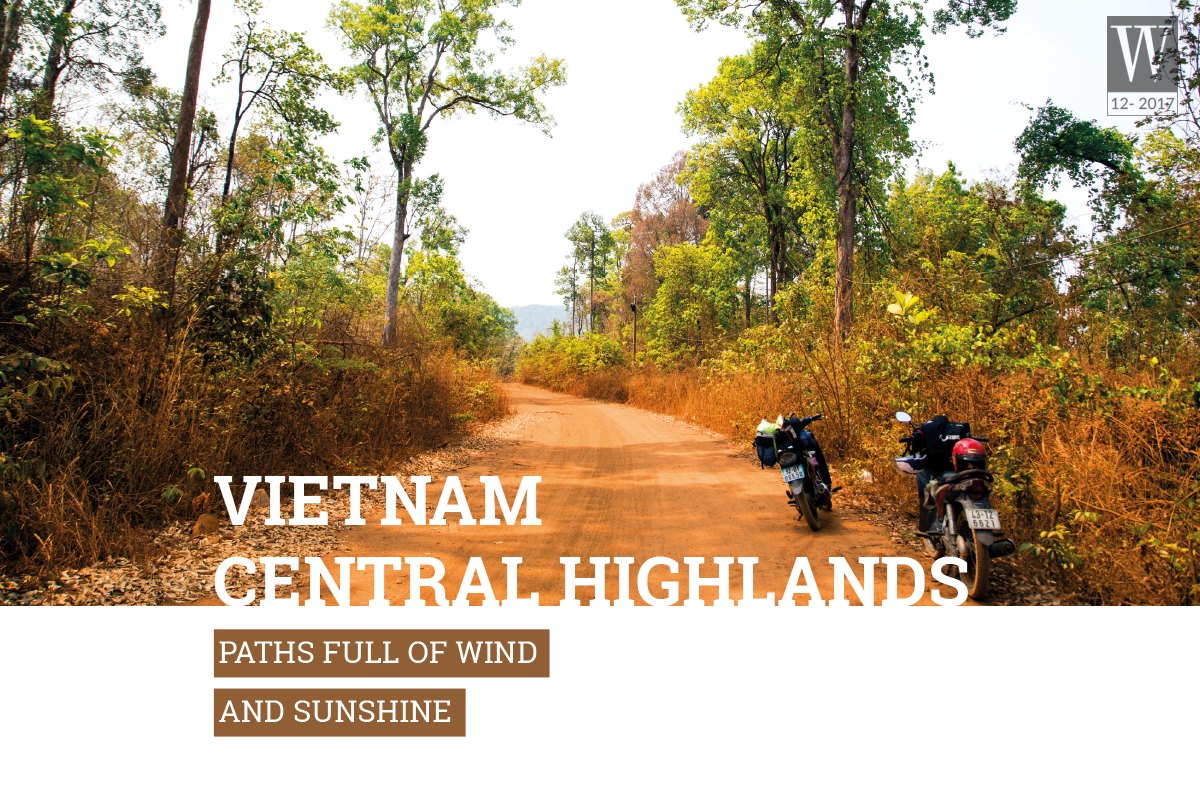 I still vividly remember the moment when I sat on the threshold of a stilt house with its very special architecture. There was only the sound of weaving looms and the laughter of children around me; looking farther, the whole space was covered in the red colour of the soil. I kept staring at the hands of an aged woman with the stress of a hard life showing on her face; each thread was woven skillfully to create a very fine fabric featuring Bahnar style. Dak Bla river filled with red alluvium still flows day day and night, and has been the source of life and the cradle for the oldest village of one of the special ethnic groups living in the Central Highlands. Even though I have travelled to all regions in Vietnam, sitting under many roofs of Ha Nhi people in Y Ty, rammed earth houses of H’mong people in Son Vi, or stilt houses of Thai people in Son La, the feeling when getting lost amidst Kon K’Tu village with dozens of Bahnar ancient houses surrounding the communal house and the church was unforgettable.

From Danang, we travelled west along National Highway 14E through Kham Duc, Thanh My, and then crossed Lo Xo pass in the dim fog. This pass is regarded as the most dangerous in the gateway to the Central Highlands, through the vast green forests, along the Po Ko river flowing to the lowland. On the highest peak named Ngoc Linh, there are hundreds of stories about the journey to find rare ginseng as well as the life of the people living the highland. Going through the pass with golden wild sunflowers in the near-end of the season covering either sides and swaying in the wind, the wheel spinning consistently led us to the town at the crossroads of Plei Kan border. From there, we turned to Bo Y – a place when a rooster crows, three countries can hear it. To stand between earth and sky and sing freely at the border of Vietnam. The three-faced landmark at the border of the three Indochina countries is the common point of Vietnam – Laos – Cambodia border on a small hill, which is surrounded only by forest, sunshine and strong wind. 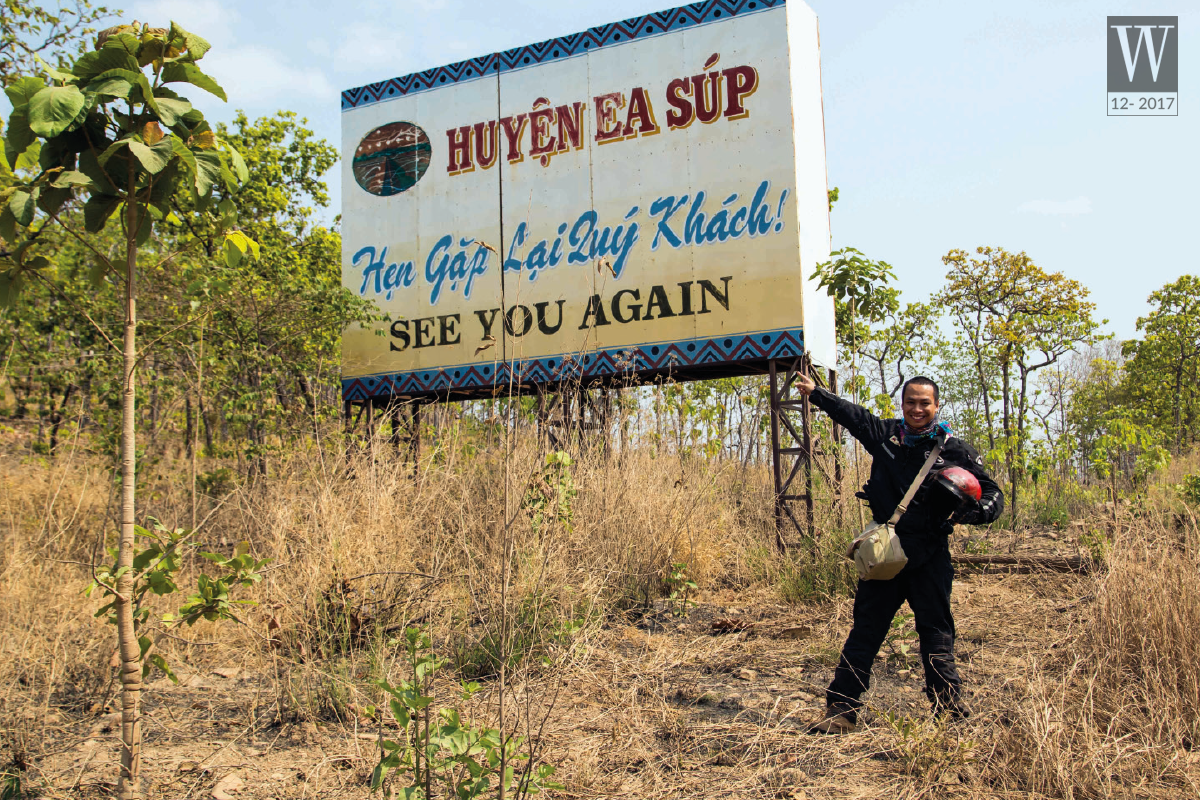 I kept following the afternoon sunlight spreading on the long slopes that are curved like a hammock. Just after coming down one slope, I continued to go up another, against the wind. Under the dazzling sun, the cool wind of the Central Highlands stroked me gently and soothed my thirst. Until hearing the leng leng sound of the buffalo gong when crossing the Kon Klor suspension bridge, I stopped to explore the oldest village named Kon K’Tu of the Bahnar people by the Đăk Bla river. It seems that the people of this land were born in the forest, grew up in the forest and when they died, they would be buried in the mountain. The forest is present in every aspect of life, in every village, and in cuisine. The leaf salad with more than 56 types of forest leaves is considered a specialty of Kon Tum, besides the long-standing works such as the Roman Catholic Diocese of Kon Tum or the over-100-year-old wooden church. The flavour of different leaves is blended together with fish sauce, shrimp, boiled bacon, chopped pork skin mixed with roasted rice powder, which creates different tastes like sour, bitter, sweet and spiciness of green peppers and pepper.

FOLLOW THE RED DUST TO FIND THE CHAMPA ARCHITECTURAL HERITAGE

Perhaps, no one can rush when coming to this immense land; if you go straight across the trans-Asia road named AH17 from Kon Tum to Buon Ma Thuot, you will be immersed in the soul of the Central Highlands. The road is flat and smooth without any potholes on the surface; covered on either side of the road are the houses of ethnic people with dozens of different kinds of flowers, and the wind kept blowing like the sound of gongs still resounding in each village. We chose a different Kon K’Tu village, Vietnam Central Highlands experience; from the Krong Buk three-ways crossroad, we turned into the forest road to go to Ea Sup, where the only Cham tower in the land is located. This is the real Central Highlands – the land of dusty roads, dust covered the wheels, dyed red the trees on both sides of the road, and made everyone’s faces dirty. However, we still felt happy because that was what we were seeking – the beautifully wild Central Highlands where people from the North and Central came to settle down and establish new villages; they were poor but their hearts were full of gratitude.

Yang Prong Cham Tower (meaning the Great God), also known as Green Forest Cham Tower, is located in Ea Rốk Commune. This is the Cham tower (tower of the Cham people) that was not built on the high hills but lay under the canopy of ancient giant trees in Ea Sup forest by the Ea H’leo river. It has the same architectural style as the towers in My Son, with the same type of bricks which has never been clung by any kind of moss and mold for thousands of years. The tower worships God Shiva (Siva) and stands alone, not located in any megastructures. The singing of birds mixed with the rustling of the wind, a real heritage standing right in front of us with many mysteries waiting to be discovered. It is a worthy achievement for us after going through the dusty path. 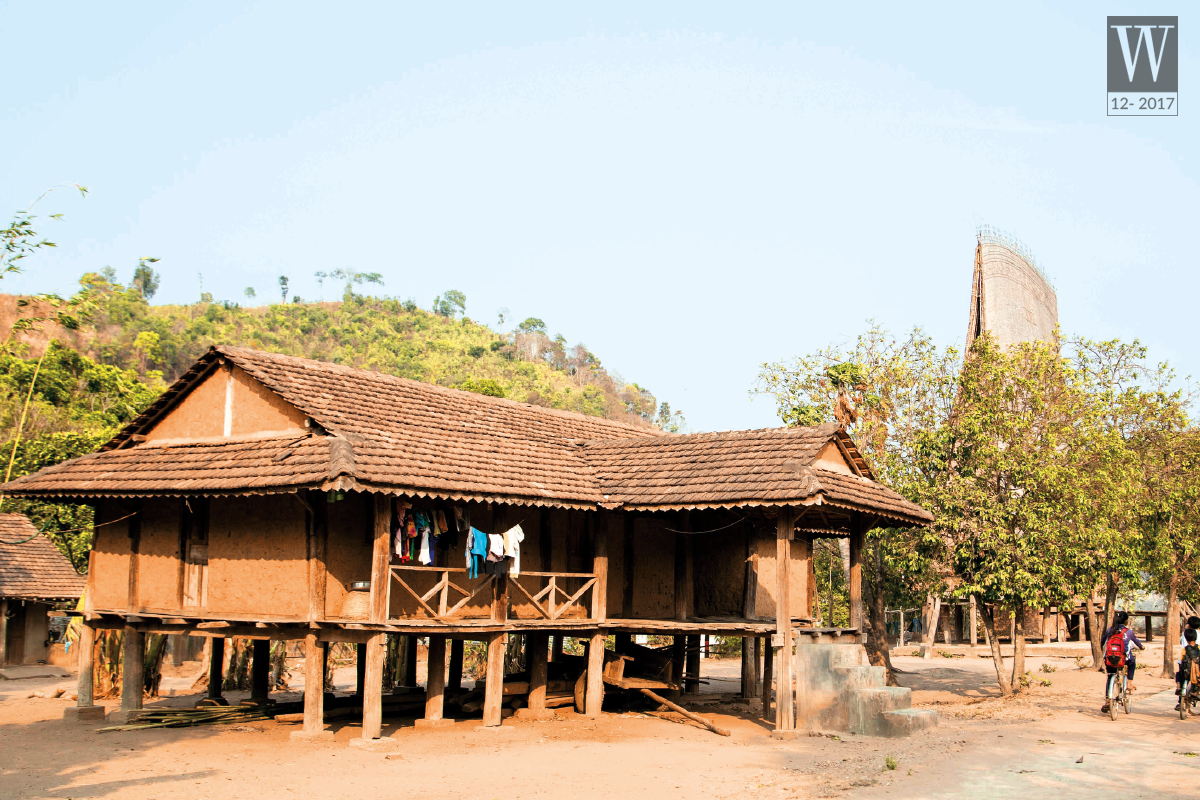 The turn of the wheel and the call of the forest continued to lead us to go amidst the unique seasonal tropical dry broadleaf forest. As a seasonal tropical dry broadleaf forest, you will see the difference when coming there at different times. In the dry season, the forest remains leafless, the soil and streams in the forest are almost dry, making it look like a dead forests. Nevertheless, when the first rain of the season falls, a miracle happens: the intense revival creates a vast green forest. That is the Central Highlands, the people of Don village are brave and tenacious to fight with wild animals, and withstand extreme weather to create unique culture.

If the Lak lake and Jun village remind me of the M’nong people’s longhouses, Ho village appears in my mind with the image of the children playing on the hills filled with white coffee flowers – a typical flower of Vietnam Central Highland in March, when bees collect nectar to make honey. At that time, the hills and mountains are dyed with a new color, pure white like snowflakes of the cold land. Beneath the blue sky and light sunshine, the white color of the tree that changed the life of many families living here creates a unique and spectacular scenery, fascinating anyone who travels to Buon Me Thuot. As for me, all of the roads I have travelled to have their own beauty. 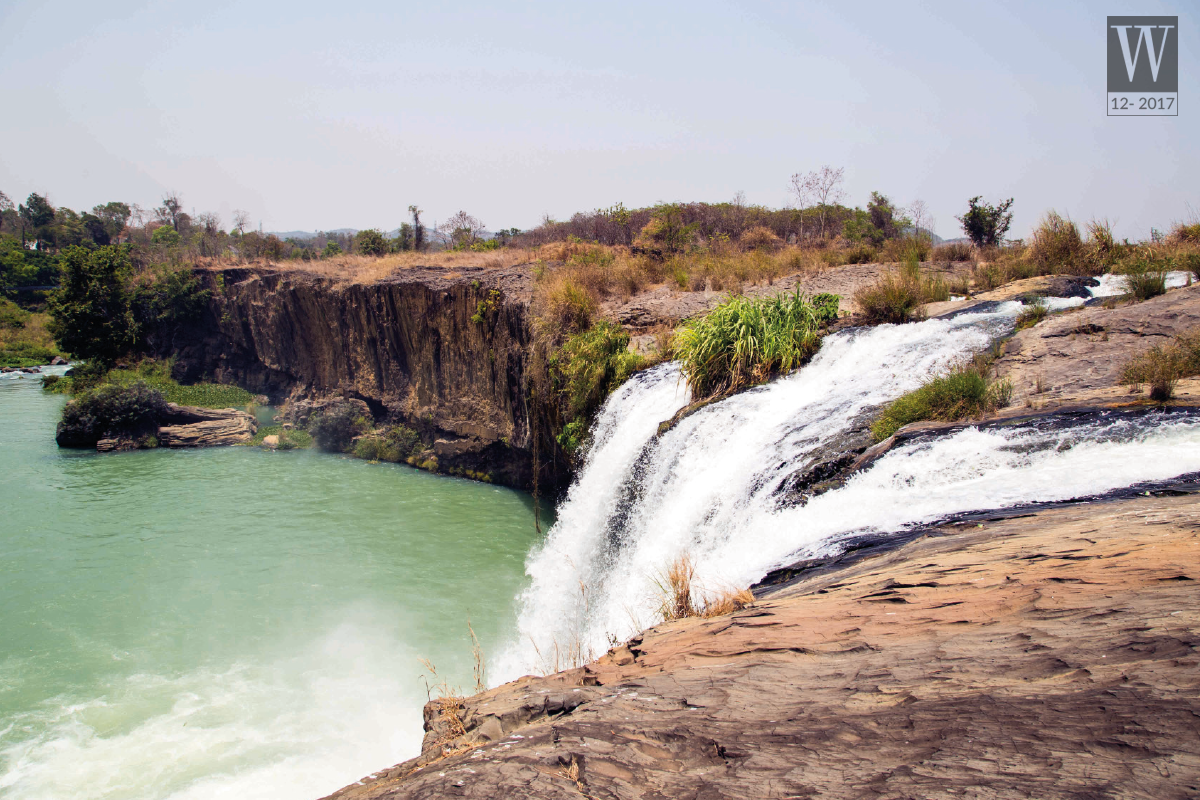 Without the colorful local highland markets in the Northwest, the majestic rocky mountains of Ha Giang or the freezing cold of Y Ty, Vietnam Central Highlands is humble in the breath of simple life. People here often go to the terraced field in the morning, then hastily come back home at the sunset, gather around the fire and stem wine to tell each other ancient epics.

There are hundreds of fairy tales as well as romantic stories about this land such as Dray Sap waterfall (Husband waterfall) or Dray Nur waterfall (Wife waterfall). Legend has it that the Srepok River had only one flow around the village. And then, in the different side of the river, there were a man and a woman loving each other, but hey were forbidden to meet each other by their family, so they committed suicide by throwing themselves into the river to unite on heaven. However, the weather suddenly became windy and cloudy, the soil split and the river also separated into two branches called “the male branch” and the female branch”. The flow of the male branch created the Dray Sap waterfall and the flow of the female branch created the Dray Nur waterfall.

It seems that anyone who comes back after the trip to Central Highlands brings a kind of nostalgia. Someone are fond of Buon Me Thuot coffee, others fall in love with the river in the afternoon sunlight or loves the waterfall and forest, while others get curious about the gong and unique tombs. As for me, my nostalgia for the Central Highlands is to the dusty roads, the houses of Bahnar, Rhade, M’mong people, and the children’s sunburnt faces full of innocence and joyfulness. The river is still flowing and rumbling as it tells me the story of water flow, the village and the forest’s people staying away from modern life but harmonizing into the flow of nature. The dry season and the festival season are about to begin, so the gong will no longer lie silently in the corner of the communal house. The lunar New Year tree will be erected, the fire will flicker by stem wines, and the village patriarch will again tell the interesting stories, keeping travellers coming back here forever. 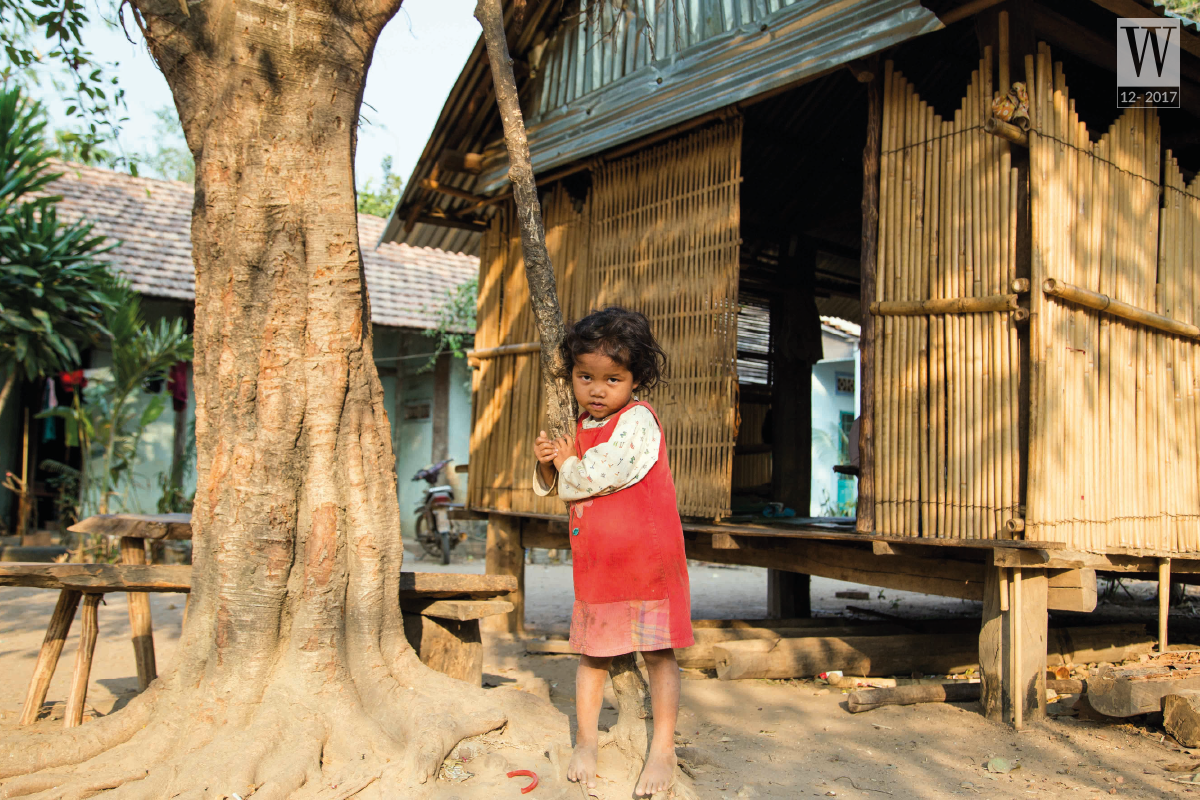 The most beautiful time to travel to Central Highlands is in the dry season from November to March and April. When the wild sunflower season is about to end, the season of coffee flowers will come with branches full of pure white flowers creating a beautiful scenery. This is also when many festivals take place such as the new rice ceremony, the wharf worshiping ceremony, spring festival and Don village’s elephant race festival.

It is recommended to wear a windproof jacket, drink enough water and apply moisturiser to avoid body dehydration if you come to the Central Highlands in the cold dry season. Walking shoes or soft sneakers are perfect for trips to Vietnam Central Highlands.