[Wanderlust Tips May 2018] There is something truly magical about Iceland; the small island nation not far from europe’s mainland presents itself with a different face during each season. Especially, the winter and early spring have many unique attractions to offer. While the northern lights were probably the highlight for most tourists coming in during this time of the year, I was even more amazed by the wonderful and magnificent ice caves. 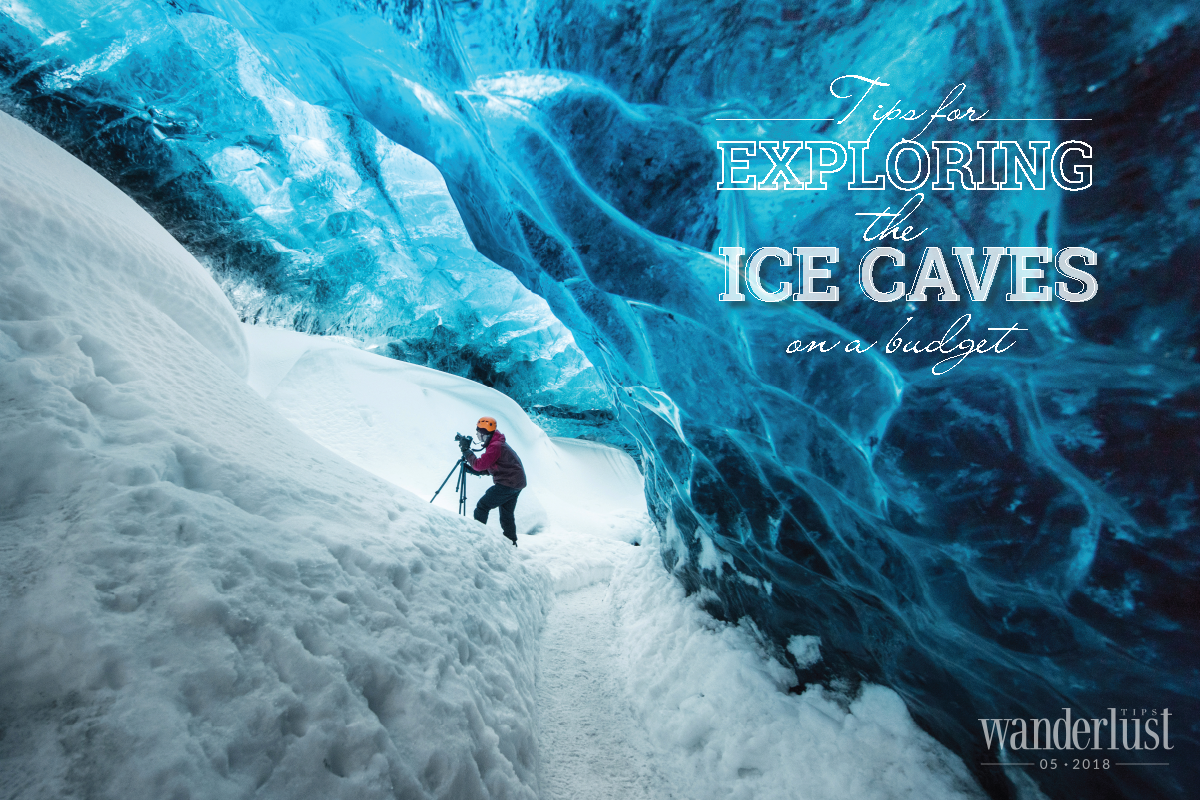 Venturing into one of those Ice Caves should only be attempted in the company of professional guides. Due to their fragile nature, the Ice Caves could collapse at any time and only an experienced guide can provide the knowledge and safety that is required to set foot in a deep ice cave. This does come with some high costs though as well, and generally speaking, the Ice Caves are not a budget destination, especially after they became more famous within recent years, and prices for the tours nearly doubled in the last 3years. You can expect to pay around EUR250(~VND7,012,600) in 2018for a 2-3hour tour through an ice cave. Nevertheless, in Wanderlust Tips’ May issue, I will share a few tips on how to make it in for much less or even no money at all.

Though I have been to over 100countries around the world, whenever people ask me about one of the attractions that I miss and was impressed by the most, it is the Ice Caves in Iceland. The intensity of the different shades of blue within the caves is incredible and makes you feel like being on a different planet. Sometimes the ice is really pure and transparent, you can look through it for meters. Changing shapes and forms every day makes them extremely unique and worthwhile to visit over and over again. 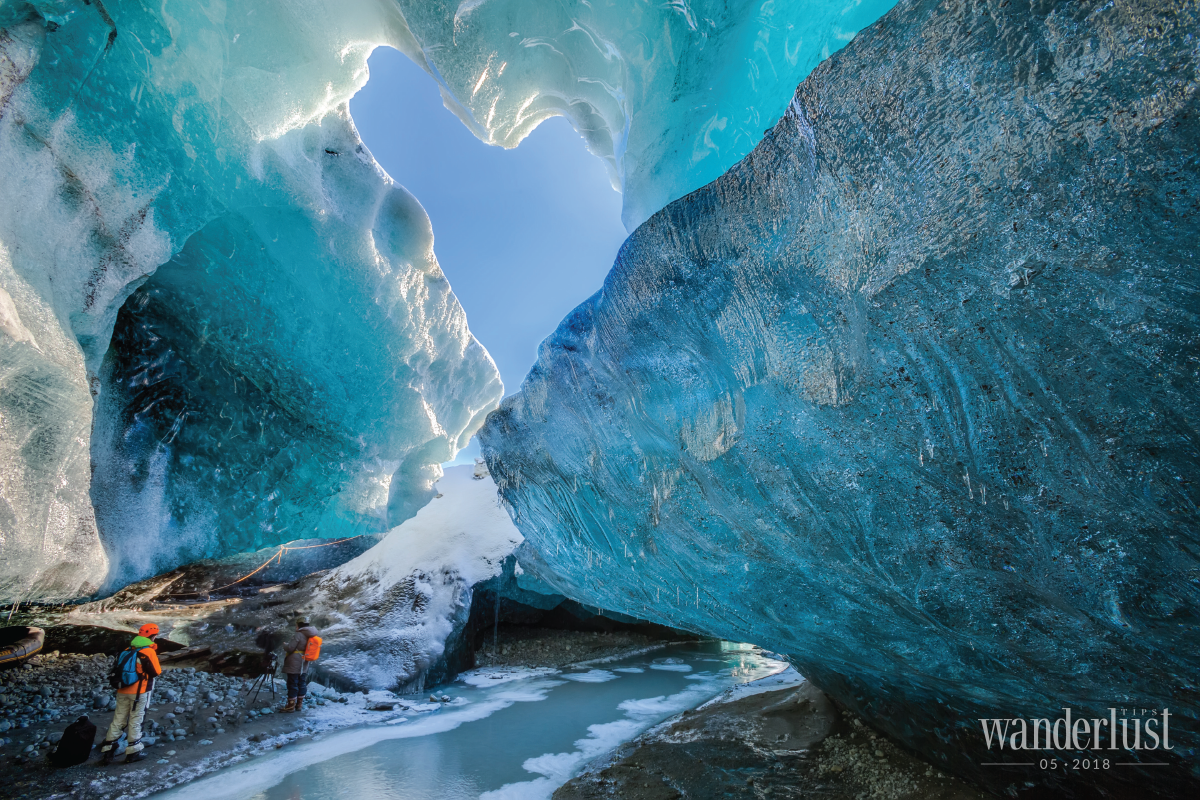 Going into an ice cave with a guide, wearing your helmet and following his instructions makes you feel like being on an expedition to an unknown world. You don’t know what to expect around each corner and while the guide safely guides you through the cave, you always get to see new details in the cave and can’t stop touching the cold and smooth iced walls. I was absolutely stunned when we came across a huge tunnel on the cave ceiling. Whenever looking up, I saw the clear blue sky with fresh snow falling down from the space above. These tunnels have been formed over the years by rainwater and are incredible to look at. Due to the fact that ice caves are very unstable and dangerous to explore on your own, it is actually a good thing that many locals started to become experts in them, offering visitors the chance to safely enter and leave an ice cave without being in danger. Without them, it would not be possible to see some of the deepest ice caves as a tourist.

HOW TO REACH THE ICE CAVES

The only international airport in Iceland is called Keflavík (KEV) and can easily be reached by flights from big European cities such as London (UK), Copenhagen (Denmark), Amsterdam (Poland), Paris (France) or Frankfurt (Germany). After your arrival, the Flybus shuttle will take you to the capital of Reykjavík in about 45minutes for about ISK2,500(~VND576,000) one way. In addition, there is also a public bus no.55that takes a bit longer, but is also cheaper, about ISK1,760(~VND405,500). A taxi to take you from the airport to Keflavík is quite expensive, about ISK15,000 (~VND3,456,000), and will only be an option if you go in groups of at least 3people. If you are a little bit more adventurous and on a tighter budget, you can also easily hitchhike for free into town by standing at the exit road at the airport. I have done it many times myself and it was really easy to be picked up here. Icelandic people are very friendly and happy to help you out! 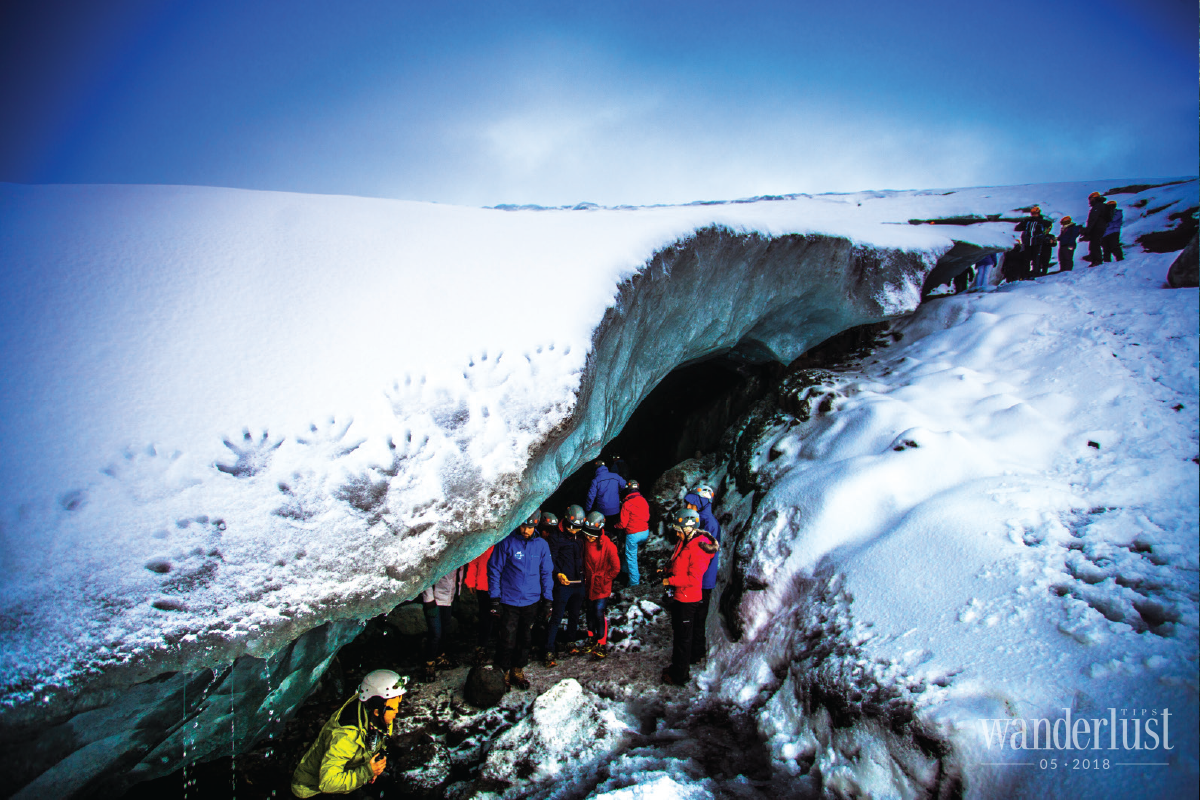 Once reaching Reykjavík, the budget traveler might want to look into Couchsurfing and get a free place to stay. Just remember that Couchsurfing is about meeting the locals, so please do make some effort to get to know your host as well. And it would certainly help if you have hosted other travellers in your city as well before. That way, you will get some good references and be able to find a host in Iceland much easier. If you prefer to check in somewhere, you can either go to a cheaper hostel such as “The Capital-Inn” offering EUR15(~VND422,000) per night for 1shared room or EUR100(~VND2,814,000) per night for a private room for 2people. Most tours will pick you up in Reykjavík, while some others require you to get towards the village of Hof, about 4hours away from the capital and only reachable by Hitchhiking or renting a car which will cost you about EUR30(~VND844,000) per day. It will be a great option if you find some other people to join you on the trip and share the costs since you can combine it with other famous tourist sights on the island.

Ice Caves can generally be visited between November and March each year. Heading out towards either the first or last couple of weeks of that period should give you a chance to get some better deals because fewer people will be looking for a spot on one of the tours.You should also include enough time in your itinerary to explore all the other amazing sights of Iceland during the winter time. Waterfalls, for instance, might be even more impressive when they are covered in ice sparkling under the sun and at night you will have a chance to see the amazing northern lights as well. 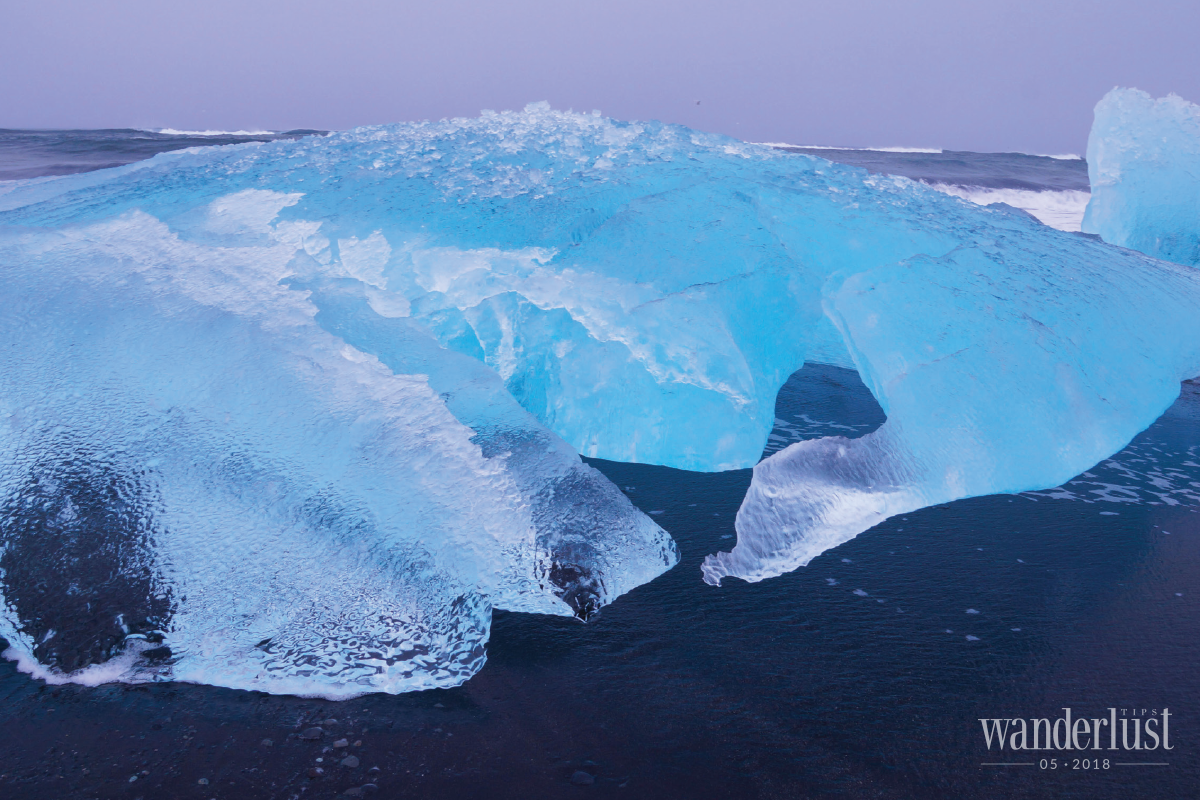 You should also compare the prices in different areas as Iceland has a few good spots to see the Ice Caves. While going to the Crystal Cave in Vatnajökull National Park, I was absolutely amazed by it. Other caves such as the Treasure Island might be even cheaper. The ice caves constantly change their shapes, and every week there could be some completely new shapes in ice caves. It is recommended to check the weather at the time of your visit to find a good deal and make sure to have enough time available in case the weather isn’t good.

The price currently is around EUR250(~VND6,904,000) for the entry-level tour. The price has skyrocketed in the past few years, as I was able to do the same for just EUR120(~VND3,376,700) in 2014. There are ways to reduce the price though, and one of them is trying to negotiate a better price or share a ride in order to get to the meeting point of the tour. 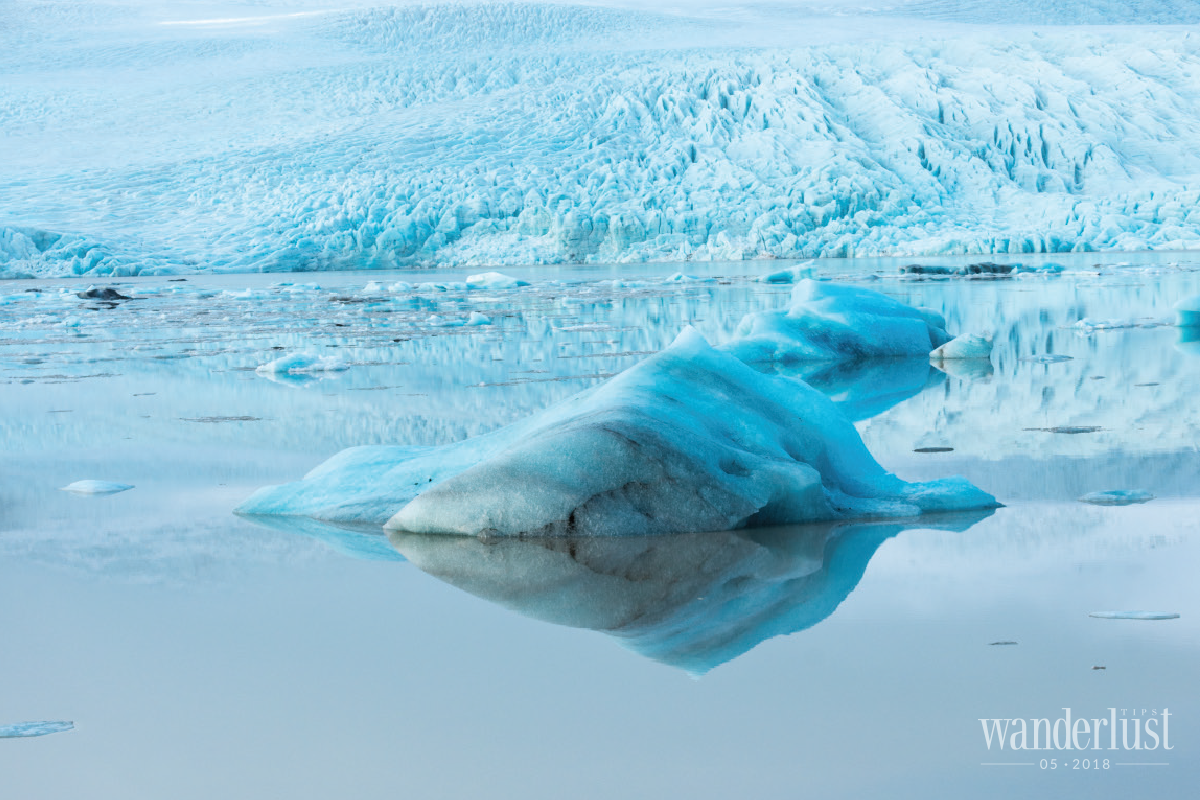 Having more people in the group will also give you a better position to negotiate the price in case the companies still have enough spots available. They would rather fill up the tour and get a bit less money from each person instead of having empty spots without any money at all. It is always a good idea to look up all the mailing addresses of the companies and put them all into one mail using the Bcc option. Make sure you write a concise and short email without missing any important information such as the number of people in your group, time of travel and budget.

Everyone that owns a camera can take some decent pictures and build a little travel blog. Basically, it means that you can provide companies with either pictures, videos, some texts and/or social media promotions on Facebook and other media platforms in order to get a discount or even free tours. I have done this many times in Australia and New Zealand with great success. I was actually back in Iceland a few months in March 2018and had a free tour set up already with two companies.

Should you be in the position of becoming an influencer, I want to share some more tips with you. First of all, make sure you have a good website and that the companies you contact have a feeling of being able to get something by cooperating with you. Having a stable number of Facebook followers is also advantageous, just 3,000followers is fine. 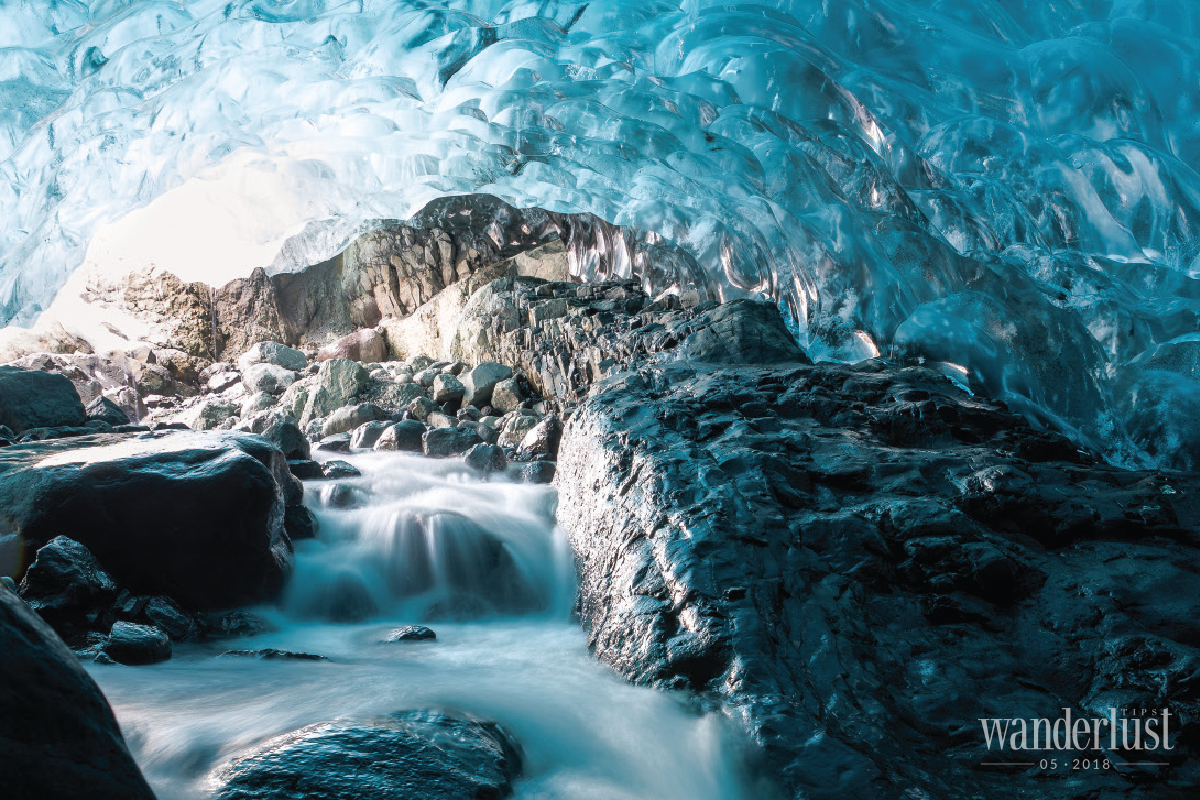 You should, however, be able to produce some good content, pictures, and videos for them. That does not mean that you need expensive equipment though, as I am also just using an entry level mirrorless camera (Sony A6000). It will produce amazing footage if you pair it with a good lens! One more piece of advice is to make sure you take a tripod here since you might not find any natural spots to put down your camera inside the cave – after all, everything is pretty slippery.

Lastly, you should make use of the same trick I mentioned before. You will probably be better off sending the same email to all of the companies, and in the case of Iceland, this number can get up to 40-50! It is getting very popular and investing the time to research all the email addresses and then sending one email with Bcc might become worthwhile even if only one of them is interested. Based on my experience, it is usually the smaller companies that are looking for influencers as travel bloggers and you should primarily target them if you do not have the time to message all of them!

Getting a cheap tour to see the Ice caves in Iceland is probably one of the harder budget trips you can do. It is possible though and I hope that my tips have motivated you to give it a try. Remember to find a good time of the year to go, write some convincing emails, and try to either get a good discount or even free tour if you can pay them back with some of the amazing pictures, video, and content you will take.