[Wanderlust Tips July 2019] When thinking of Haiti, people often imagine its poverty and instability, but there are also many positives that to be found here, it is an enchanting land of lush green nature, a proud history and art-loving local people. 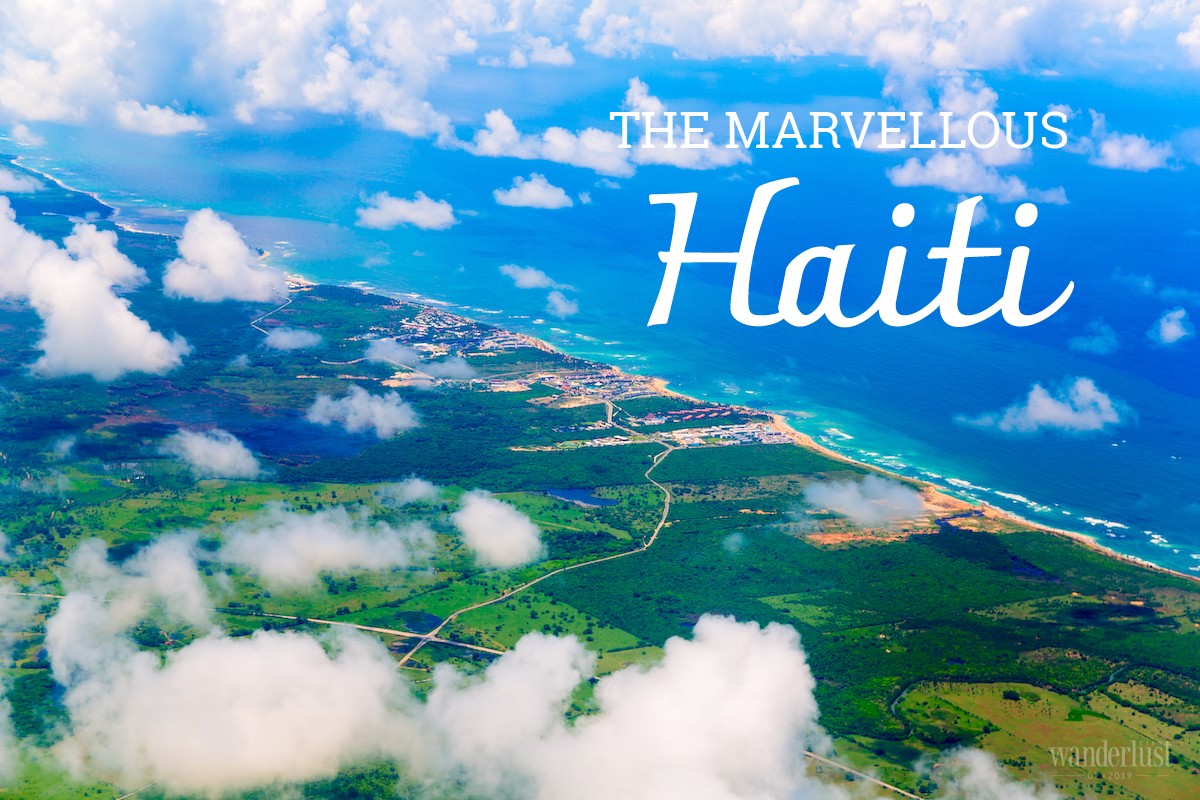 THE ENDLESS STRETCH OF BLUE IN HAITI

Being a country located on the beautiful Caribbean Sea, Haiti has never disappointed nature lovers with its distinctive colours. The lush green of the mountains and forests, the deep turquoise of the sea, the crystal clear blue skies, all of them enveloping each other in the most elegant space.

Haiti shares the area of Hispaniola Island with the Dominican Republic – the island is located in the Great Antilles archipelago in the Americas. Mountains and sea are two distinguishing topographic features here. Almost all of Haiti is nestled in the rolling hills, hence local people build their houses in layers that run through high slopes. Due to its island status, the sea is considered the “pièce de résistance” in Haiti. The Haitian sea boasts an unrivalled beauty with water so clean and crystal clear that you can easily capture numerous small fish excitingly swimming in the sea. The beaches in Haiti are often surrounded by vast mountain ranges, so the sea is extremely calm with only the gentle sound of waves lapping. I was particularly looking forward to taking a dip without having to worry about the danger of huge waves. Conveniently, the sea in Haiti is not affected by strong winds and there are many trees dotted along the coastline for you to shelter from the scorching sun. I took advantage of the perfect conditions and opted to lie down under the shade of the trees and watch others frolicking in the cool, sparkling water, it was blissfully tranquil.

RISING FROM THE DARKNESS OF SLAVERY 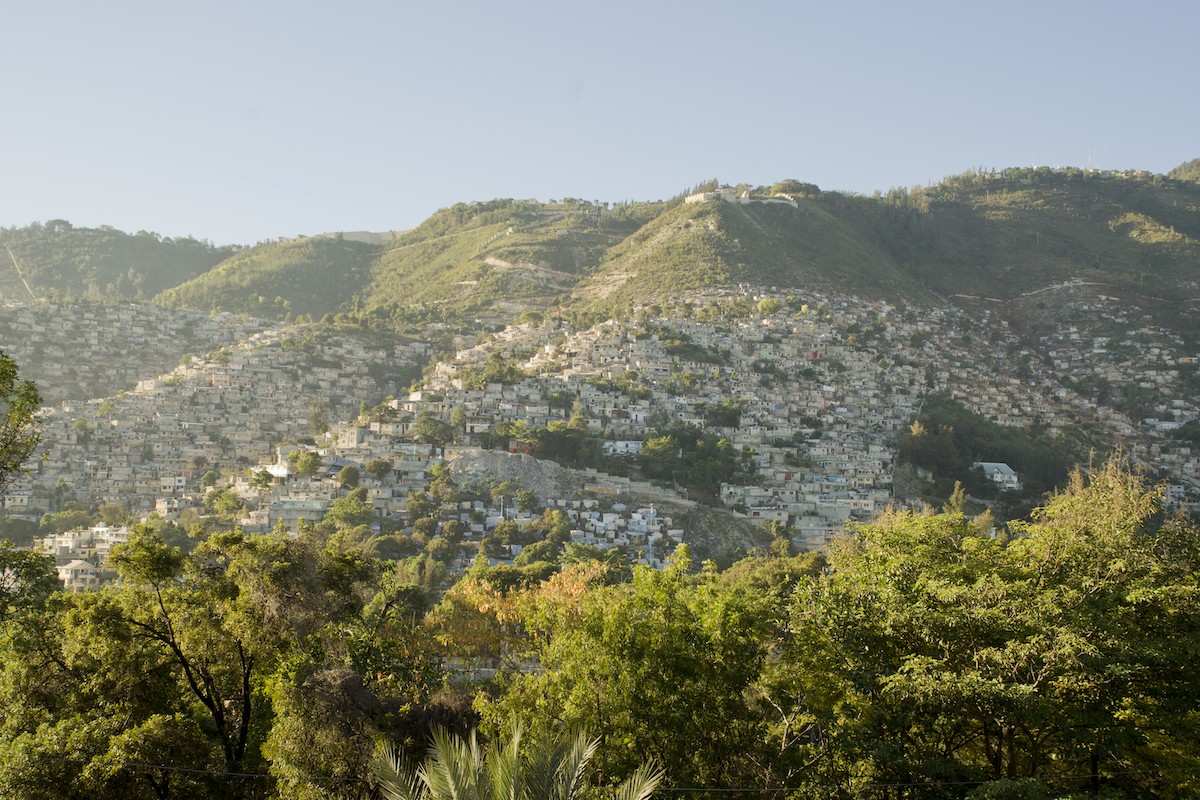 From the metropolis of Port-au-Prince, I drove along an asphalted road that was pleasantly, surrounded by the breathtakingly beautiful mountains on the right, which taking a closer look uniquely resembled the body of a sleeping woman, while on the left we passed the deep, serene blue sea. I felt refreshed driving along the quiet road surrounded by stunningly gorgeous scenery. After around an hour’s drive, I reached the edge of a Montrouis small town, I turned left onto an old trail, which was the entrance of the Ogier-Fombrun Museum. Located in the beautiful Moulin Sur Mer resort, Ogier-Fombrun Museum is the capital’s renowned historical museum, where you can easily learn about Haiti’s remarkable history and culture.

Ogier-Fombrun Historical Museum was formerly a sugar plantation of Guillaume – an army colonel. This building was built in during the 18th century, 1760 respectively. During Haiti’s revolutionary period, the place was abandoned in 1799. It was not until 1977 that Architect Gérard Fombrun recovered and renovated the space. In the spirit of protecting national heritage sites, Gérard Fombrun collected materials and supplies dating from the pre-Columbian period, the French and Spanish colonial period and the establishment of Haiti in 1804. Here houses an extensive collection of authentic artifacts, for instance there are a population of houses with water pipes up to 150m long. When the wheels rotate, the water is directed to the water pipes serving for the production of sugarcane. At that time, Haiti was the most thriving colonial country of France, supplying three quarters of the world’s sugarcane.

In contrast to the economic aura that a colonial country like Haiti had brought to the empire, its colonial period was one of the darkest periods in Haitian history, especially due to slavery. However, thanks to this difficult period, Haiti later became a country boasting a rich culture and multicontinental heritage sites, two official languages including French and Haitian Creole, an abundance of beautiful music and art reflecting the influences drawn from Africa, India and Europe. These three cultures exist harmoniously and are subtly visible in the daily life of Haitian people. 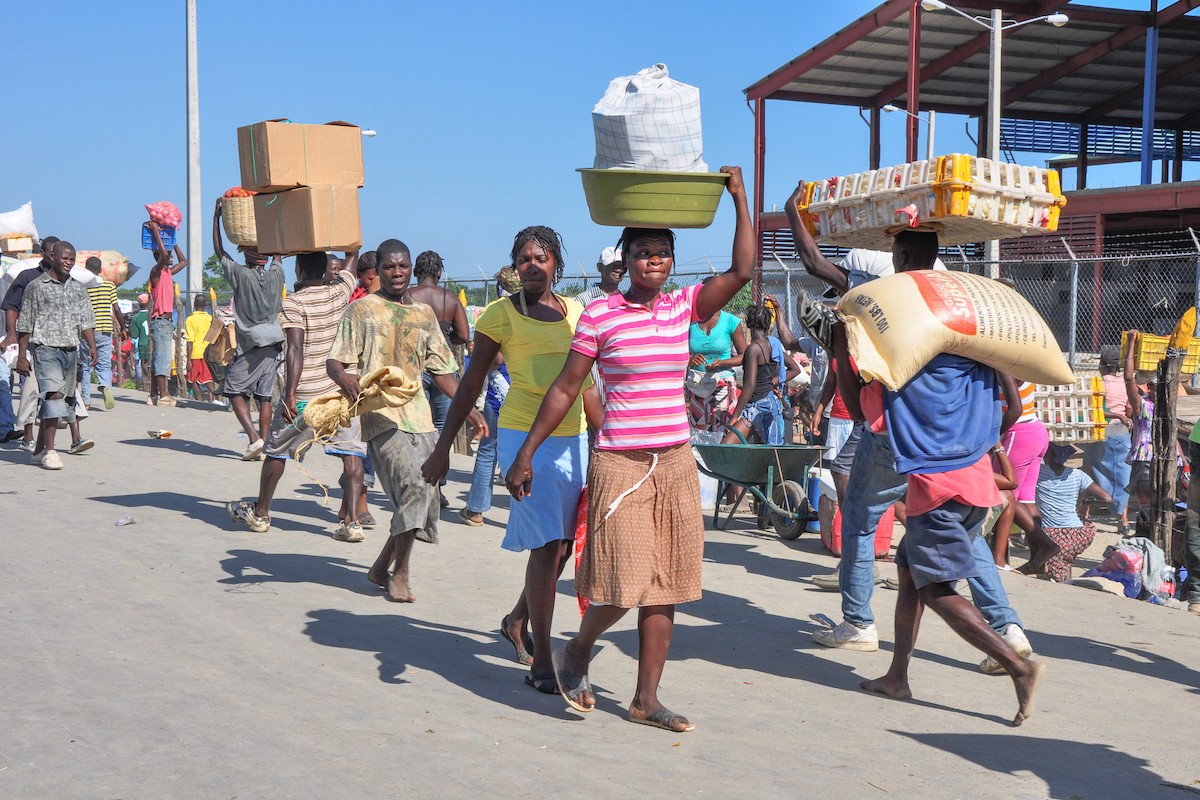 In 1804, Haiti declared its independence. This was the first black republic in the world and the only nation established as a result of successful slave rebellion. The spirit of Haitian liberation inspired many countries, and hence became a threat to the established order in the world at that time.

Haiti is a palpable witness to the horrors of slavery and that should never be forgotten. Those brought from Africa were forced to work but their minds, souls and spirits were difficult to subdue. They remained optimistic, developed their strength of character and that is ultimately the key to the success of Haitian independence.

Bearing a resemblance to the spirit of the Haitians, the most distinctive art here was derived from a raw material – iron. The Haitian people deftly combined the strong rigidity of iron bars with authentic artistic creativity to compose the most impressive masterpieces. Iron products in Haiti are tremendously sophisticated and durable meaning they can be utilized as outdoor decorations. Haitian iron art is used simultaneously in interior furniture and garden decorations, and it is also popularly used in luxury restaurants and hotels. Aside from that, a wide range of items including children toys or daily supplies in Haiti can also be made of iron in a variety of eye-catching colours and design styles. 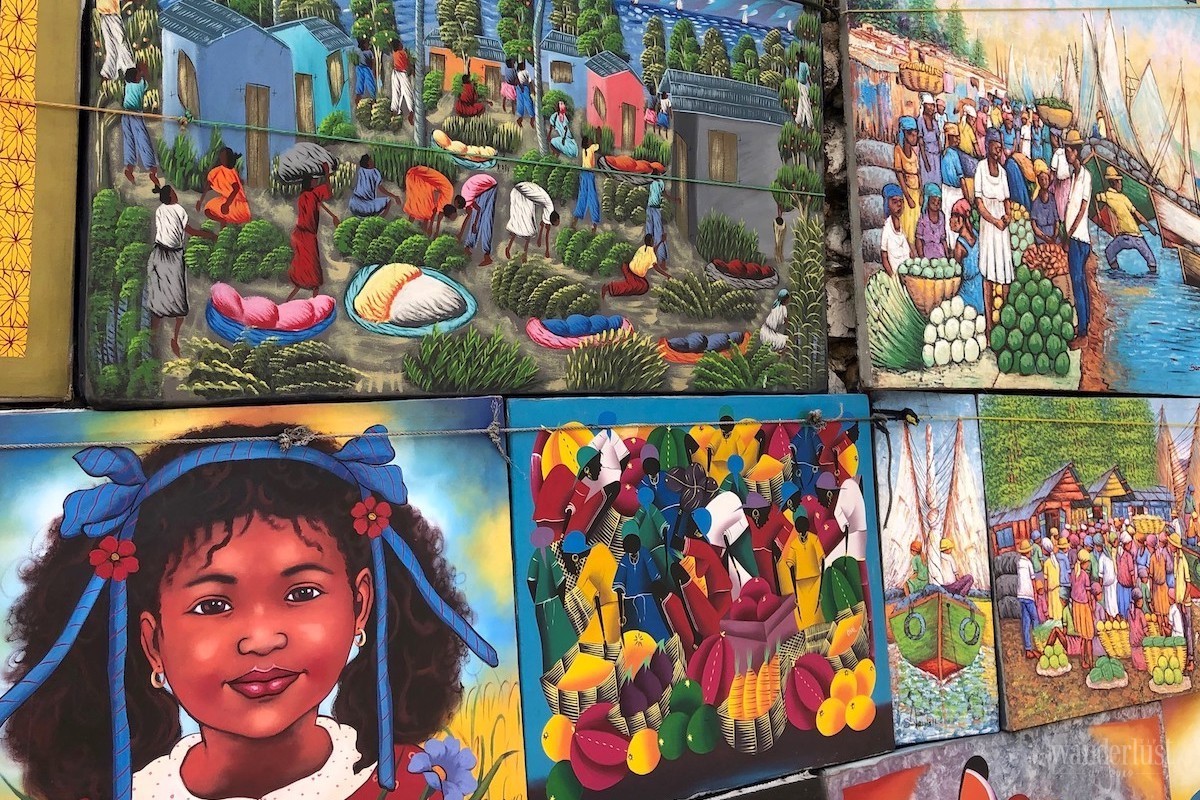 The most perfect venue to admire Haiti’s metal architecture and iron art has to be the Iron Market. Sometimes, it is also called Hyppolite Market because of the former president Florvil Hyppolite who acquired the metal structure from France for its construction. It was built in the 1890s and devastated by the largest earthquake in Haitian history in 2010. Nevertheless, the Iron Market was reconstructed identically for the sum of 18 million dollars in 2011. Today, the Iron Market is considered a national heritage site in Haiti. The market encompasses two large halls with their rows of arches and iron house frames, each domed house is 2,000sq. m wide. It was connected to an iron gate with four domed towers and a clock hung on the gate’s facade. The entire structure is painted red with impressive streaks of green.

The Iron Market is probably the most crowded place in Haiti. Coming here, you should not be shy or too “polite”, otherwise you will be overwhelmed by the crowds, goods and solicitation. You could find everything you want from Haiti at the Iron Market because there are always, handicrafts, seasonings and food on offer. Don’t rush, observe others and take your time to comfortably negotiate with sellers, that way you will be able to appreciate the buzzing and fun-filled atmosphere of bargain hunting. Note that the Iron Market is not for everyone, especially those who are not keen on the hustle and bustle.

In addition to the iron art, oil painting on canvas is also a familiar craft made by Haitian people. There are that many paintings sold on the street that you might think the entire Haitian population are artists. The paintings mainly depict the dynamic scene of the markets and the stunningly beautiful scenery in Haiti. With authentic artistic lines imbued with the lifestyle and culture in Africa, talented painters sketch out a magnificently vivid picture. When taking a stroll along the street, it is easy for you to find lively-decorated walls adorned with fascinatingly vivid images. I walked through many streets with large murals painted on the walls. Most Haitian paintings are blended with various colours and free themes. With endless inspiration, this is the place to snap countless beautiful shots. 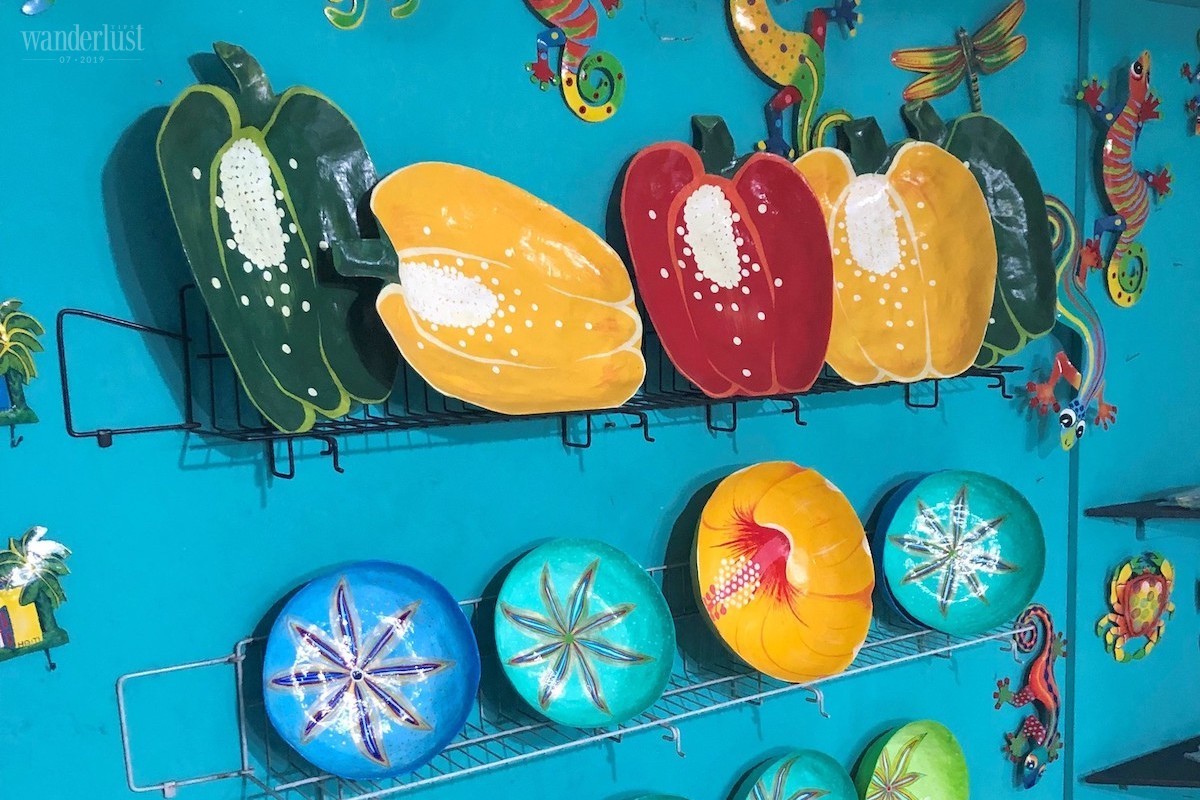 The Haitian Embassy in Vietnam is located at 44/4 Van Bao Street, Ngoc Khanh Ward, Ba Dinh District, Hanoi City. You can make an online visa application or easily apply for a Haitian visa at the embassy at a cost of USD75. However, there is no direct flight from Vietnam to Haiti, hence you need to carefully check in-transit visa procedures.

After arrival at the airport in Haiti, as you come to the exit there are many stores offering free SIM cards for various Haitian telecommunications companies. Viettel mobile network invested in Haiti as there are a wide number of Vietnamese people living there. If needed further information and support will be available.

HOW TO TRAVEL IN HAITI

A tap-tap is a vehicle used popularly in Haiti which resembles a motorbike in Vietnam. Negotiate the price before booking, it should cost around 50 Haitian gourdes (=VND12,500) for 2km. You can also use US dollars, but you should exchange currency from the dollars to Haiti Gourde for your convenience. In contrast to Vietnam, the streets are extremely narrow and steep thus difficult to maneuver it is not advised to hire a car to self-drive.

In Haiti, it rains a little, mainly in the late afternoon/evening. The daytime temperature is about 300C. You should wear sun cream and a wide-brimmed hat when going out.

Delicacies including lobsters, sea cucumbers and shark fins that are expensive and rare in Vietnam are actually cheaper than vegetables in Haiti.

In Haiti, large, fresh lobsters are a tenth of the price compared to that in Vietnam. In a poor country like Haiti, fisherman use rudimentary techniques that yield a small catch.

For those who do not want to eat an abundance of seafood then the Haitian traditional dishes usually include beans, rice and sauces, hence they do not cook a lot of sea cucumbers which contain a lot of nutrition. Most sea cucumbers are caught and retailed for a small number of people in need.

Haitians hunt sharks with spears and their fresh fins are available directly at beaches. Dried or packaged shark produce is not available in Haiti. If you want to buy shark fins, then discuss with one of the spear hunters a few days before and cross your fingers for a catch.

Moreover, rice is considered a staple food in Haiti, so Haitian food is pleasantly familiar for Vietnamese. A wide array of restaurants and eateries are available including fast food outlets. Coming to Haiti, you should also try local fruits with their delicious flavours, notably sweet lemon, Baptist mango and avocado, to name a few.