[Wanderlust Tips April 2018] Not only do they attract tourists with amazing natural scenery, famous places in the world also draw tourists with talented people who were born there. These lands are associated with fashion designers such as Tom Ford, Roberto Cavalli, and Carolina Herera. Their collections and designs which are highly appreciated by fashion devotee are also influenced by the place where they were born. 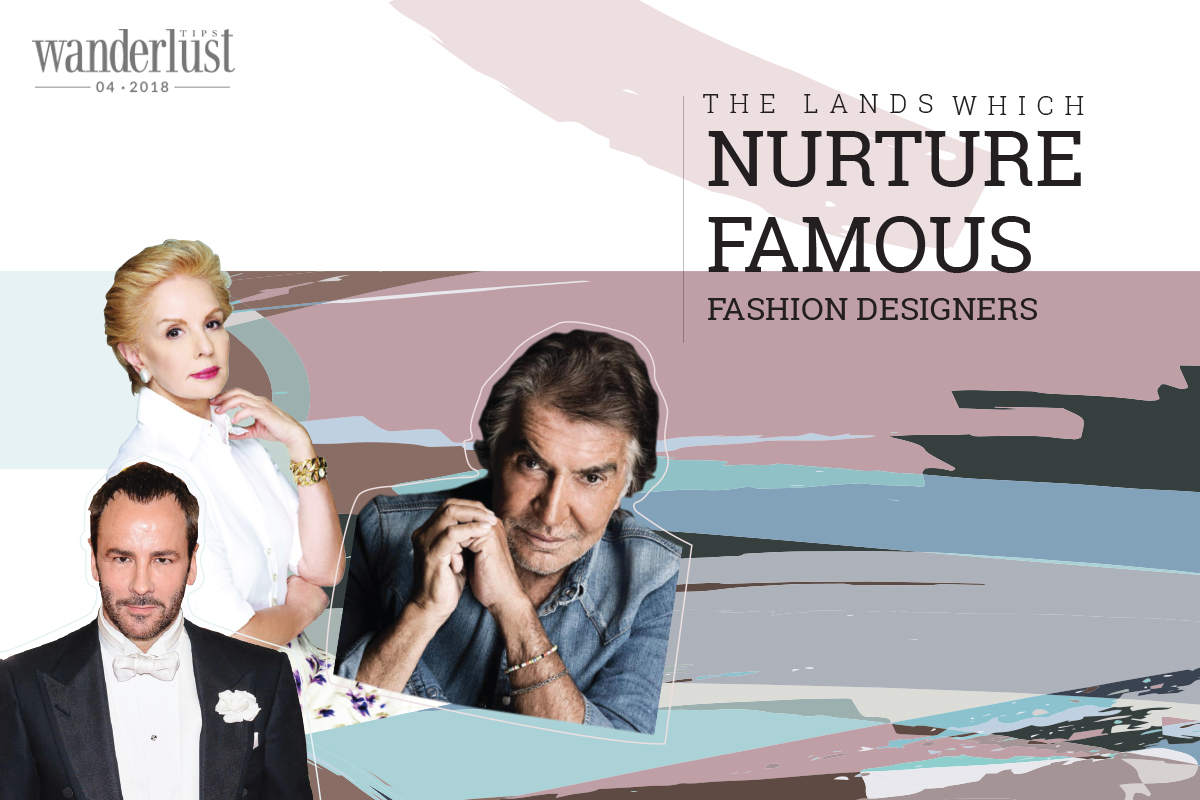 1. TEXAS, USA – THE HOMELAND OF THE TALENTED ECCENTRIC TOM FORD

Thomas Carlyle “Tom” Ford is a Texas fashion designer, actor and film director. Being widely known as the main designer of Gucci brand, he also has his own fashion line borne his name and being nominated for an Oscar for the movie bearing his name A Single Man. 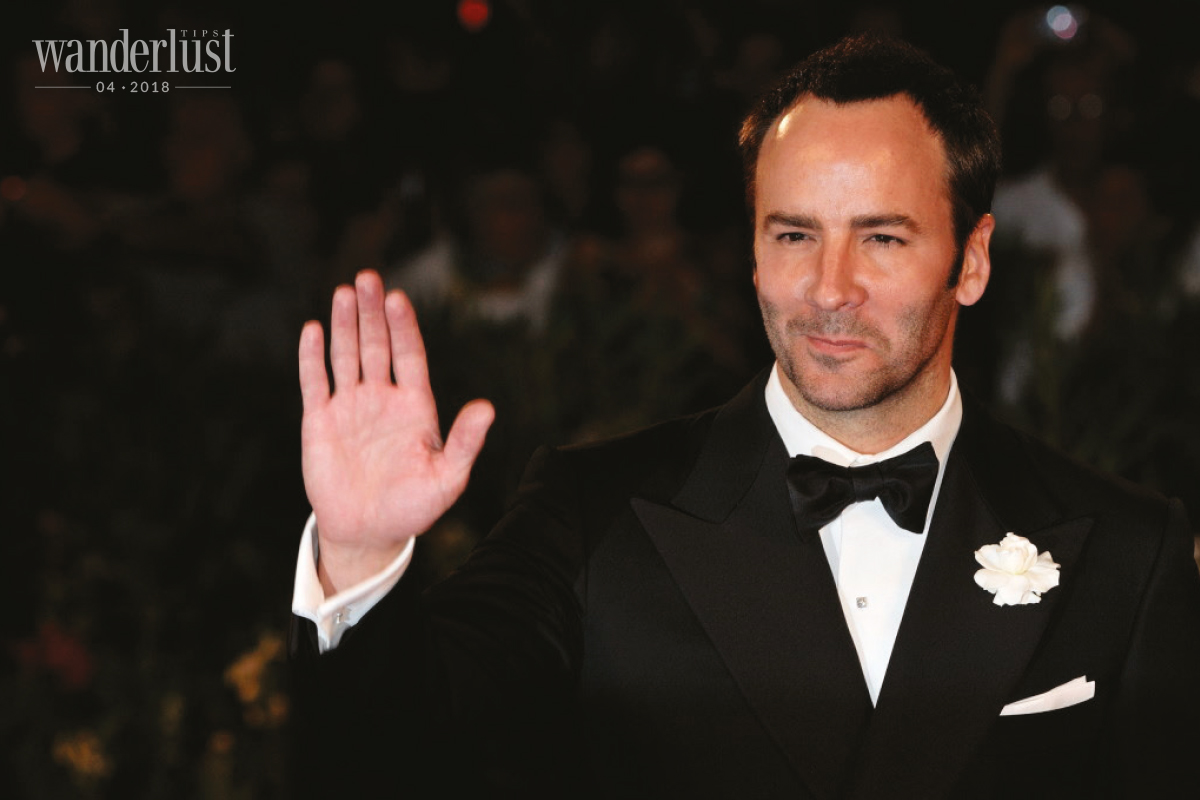 In 1992, Tom officially put his first footsteps into the fashion industry. In 1994, Tom became the creative director of Gucci, and the young man of two decades ago made a remarkable achievement: creating a new era of glory for Gucci, guiding the brand which was going bankrupt to become a luxury brand which is estimated to cost USD4.3billion.

Texas is the land that gave birth to a talented fashion designer like Tom Ford. Texas is located in the middle of the southern United States, adjacent to the Gulf of Mexico. This state actually consists of six major regions. From one region to another, the landscape changes from dark green pine forests to rolling hills and desolate deserts. Each region has its own characteristics of trade and agriculture, along with different weather, but all share a unique beauty and history.

There is no direct flight from Vietnam to Houston – the largest city in Texas, so you have to transit through Hong Kong (China), Tokyo (Japan) or New York (USA) depending on the schedule of the airline. 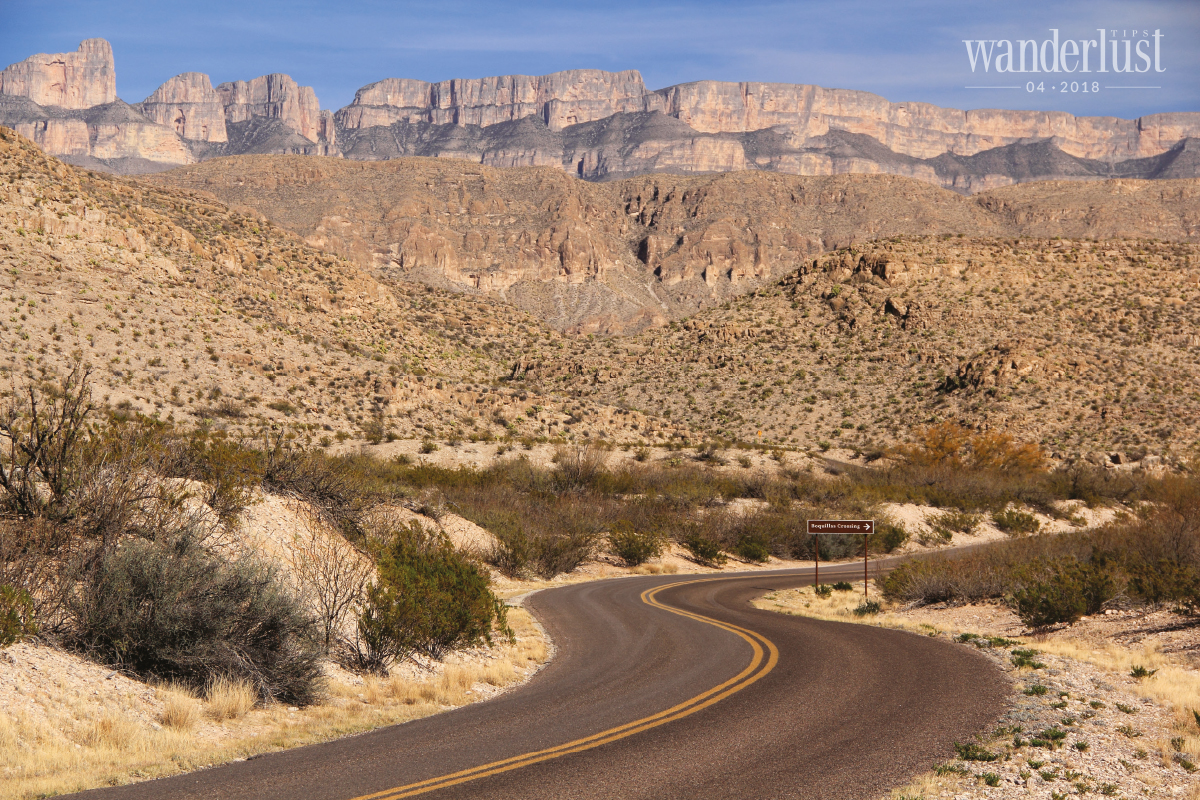 The climate in Texas is diverse, warm in the winter and hot in the summer. Tourists visit Texas in the summer to enjoy the stunning natural scenery and the clear water of the Hamilton Pool, Austin.

Divided into three areas: the Rio Grande Valley, the Chihuahuan Desert, and the Chisos Mountains.

Thanks to the diversity of the landscape, this park is home to over 400bird species and 1,100different plant species. The most popular activity that tourists do when they visit here is walking the 384-kilometres long trail to admire the wonderful natural scenery.

Built in 1903, the museum is an interesting attraction in Texas with more than 24,000artifacts.

Offers visitors an insight into the activities of the world s largest space program with exhibits, films, models, exhibits relating to astronauts, and moon rock samples which are displayed here.

Being one of the longest islands in the world with a length of over 112kilometres, it is an important nature reserve in Texas, consisting of beaches, sand dunes, grasslands and countless migratory birds. The most famous animal found at this island is the rare.

This is one of the most important historical monuments in the United States. It was associated with the legend between Texas people and Mexico’s army.

Texas are often proud of the food they eat. You can enjoy specialties such as barbecue, Queso ice cream, vodka, salad stew, Tex-Mex, and fried chicken.

Roberto Cavalli is the father of the wildlife printing and sandblasting on jeans – one of the basic features in the jeans production industry today. In the mid70-s, he invented the skin printing method and gained attention from major fashion brands like Hermes and Pierre Cardin. 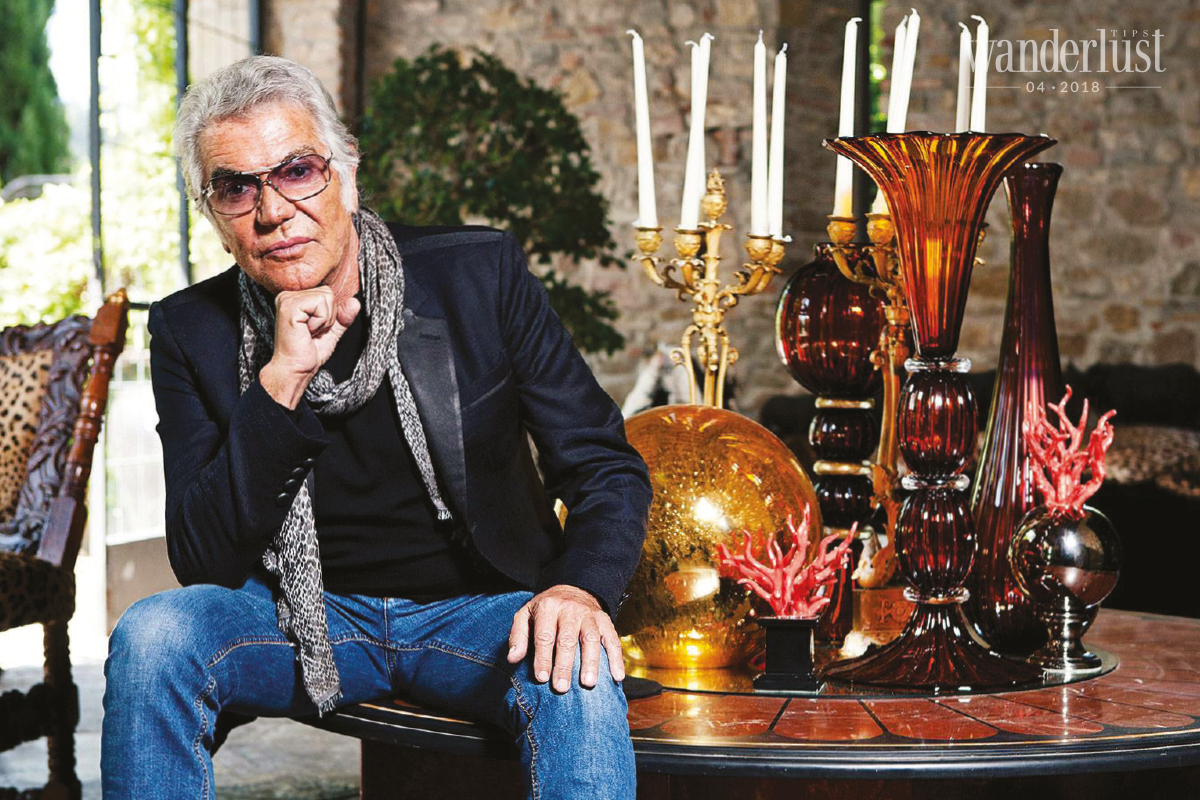 Being born in a family with artistic traditions in Florence, Tuscany, Italy. The birthplace of the talented genius is now considered a heaven of art in Europe. Florence is honored as one of the most beautiful cities in the world. In 2007, Florence was named the “World s Best Tourist City” by Travel Leisure. Visitors can find ancient castles, churches, and museums filled with rare paintings and precious statues. Florence bears the unique values of art; this was the birthplace of the Renaissance movement that took place in the 15th and 16th centuries.

There are two ways to get to the beautiful city of Florence from Vietnam.The first way is to take a flight to Florence with transit in Paris of France. It will take you about 17 to 21 hours to get there. Or you can fly to a destination in Italy, and go to Florence by train. Although they save you a bit of time, the cost of domestic flights in Italy is quite expensive, so you if you travel by train you can save a lot of money. In Italy, Alitalia and Meridiana Airlines serve domestic flights to Florence. 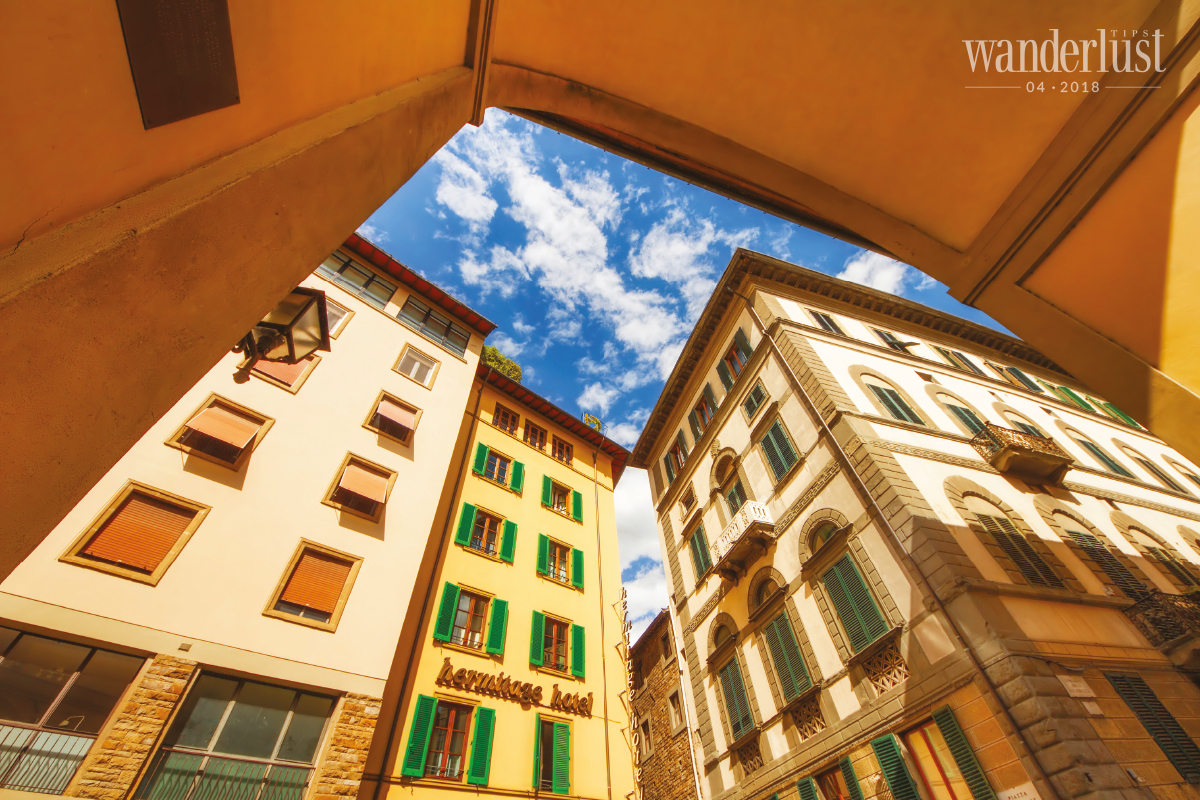 The time when tourists often visit Florence is from February to October, in which the ideal time is from May and early Junebefore it gets too hot. In August, many citizens here will go on vacation, so almost all of the shops are closed. You should not go to Florence in July or August because it›s the peak season, and the hot weather is tiring and not enjoyable.

In Florence, you can find a lot of places to enjoy both local and international dishes. Regarding the places to eat in Florence, there probably is nothing better than the market, where you can smell the aroma of cheese and fresh salami, enjoy gelato, see the golden color of olive oil soaked in pots, and get tempted by the color of ripe fruit dangling on the stalls.

The Arno River runs through the city with the Vecchio bridge crossed by, creating peaceful and romantic beauty.
This unique bridge survived through the World War II. Built in the Roman era, the bridge still retains its original historic beauty after many years of repairing.

Built in the 15 th century, but it still retains the original pristine and modest beauty until now.

Going out of the library, you can visit the nearby Duomo Square which was designed by the genius architect Brunelleschi and features the beauty of the Renaissance architecture.

Come here, you can visit the Cathedral Square to admire its massive marble architecture.

Nearby are the Santa Maria del Fiore and Bell tower (Campanile) with the height of 89metres; the top of the tower is flat and not pointed as other bell towers. You can enjoy the panoramic views of Florence from the top of the tower.Two of the most famous museums in Florence are the Accademia Gallery (XIV century) and the Uffizi Gallery Museum built in 1560. They preserve priceless works of art and sculptures of famous artists of Italy during the Renaissance.

3. VENEZUELA – THE QUEEN OF THE WHITE SHIRT CAROLINA HERRERA

Carolina Herrera was the one who set the trend of combining classic white shirts with long dresses, and many celebrities wore them to the red carpet. Herrera started designing white shirts from her first collection in 1981. Since then, each of her collections has at least one style of white shirt. It never stops inspiring her. The passion for this type of outfit is so great that she can keep designing new white shirts her whole life without getting bored. 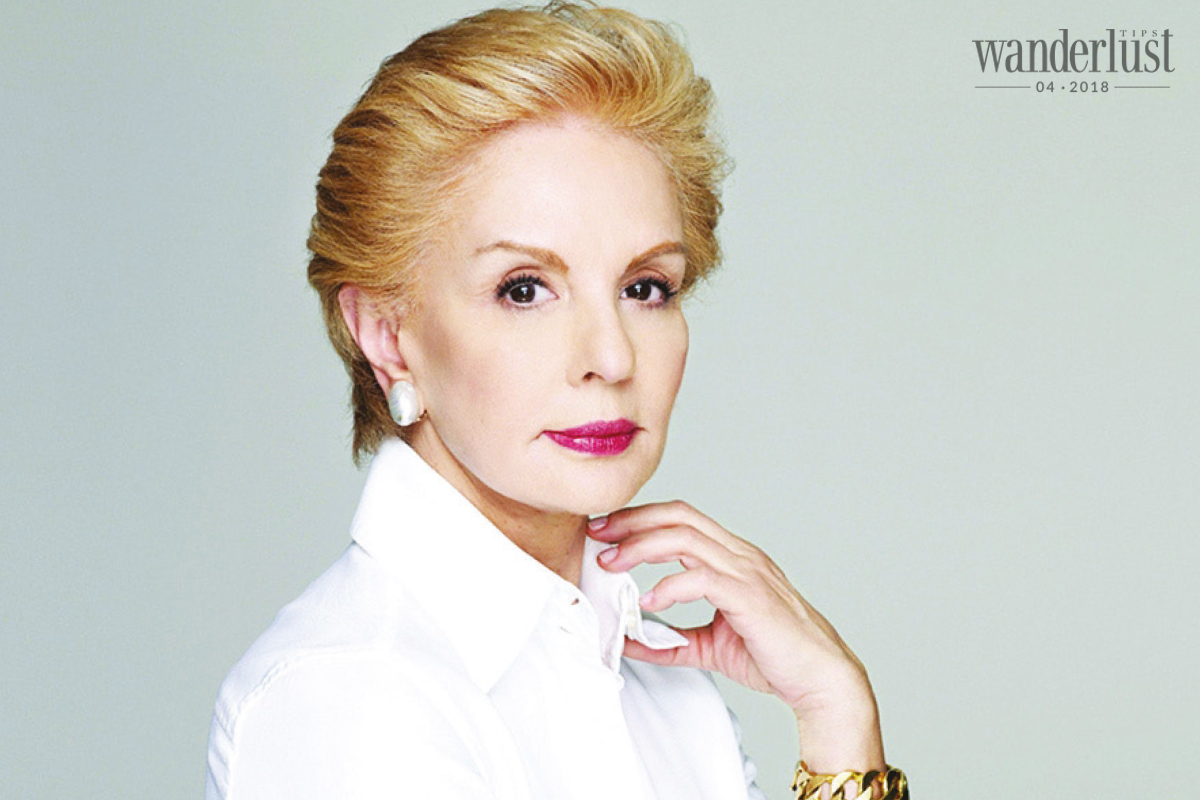 Born in Venezuela and considered as the most elegant woman in the international fashion world. It is said that the land of Miss Venezuela has a great influence on the designs of Carolina Herrera. Besides, this country also has beautiful natural scenery. Venezuela has the highest waterfall in the world and the longest coastline, stretching to the Caribbean Sea. This country is considered as one of the top 20bio-diverse countries in the world.

Recently, there is no flights from Vietnam to Venezuela, so you have to transit once or even twice in some cities such as Seoul (South Korea), Miami (United States), Tokyo (Japan) and New York (United States).

The flight from Hanoi to Caracas (capital of Venezuela):

Currently this route is operated by 15airlines with an average frequency of about 43flights per day. Major airlines that serve this route are Vietnam Airlines, Air France, American Airlines, Japan Airlines, and Cathay Pacific Airways. Prices for this flight range from USD2,159- USD6,590(~ VND49,650,000- VND151,600,000).

Ho Chi Minh City – Caracas flight: Airlines that serve this route are ANA All Nippon Airways, American Airlines, and Vietnam Airlines with the frequency of 41flights per day. The average ticket price of this flight is cheaper than that of the Hanoi – Caracas flight: USD1,860- USD4,401(~ VND42,780,000- VND101,223,000).

In Venezuela, the dry season is from December to April. This is considered as the best time for you to visit Venezuela.
During this time, the average temperature is only about 32degrees Celsius and it is not too harsh. You can enjoy tourist attractions without the fear of being affected by the weather. If you want to explore the islands, the weather will be cooler, from 24degrees Celsius to 28degrees Celsius.

Venezuela is famous for its specialties such as Arepas, Pabellon Criollo, Hallaca, Cachapas, and Hervido. The beverages here are mainly fruit juice like Papelon and Chicha de Arroz, as well as coffee.

Located about 170kilometres from the mainland of Venezuela. It is an ideal place for you to enjoy a peaceful life with various interesting activities such as diving and windsurfing.

– Coro and its port

Located in the northwest of Caracas capital, along the coastline that is famous for the unique architecture of 600 Spanish inspired buildings.

Located in the southeastern part of Venezuela and is a UNESCO World Heritage Site. Canaima has a mountainous landscape and the highest waterfall in the world called Angel with the height of 979metres.

– Merida and its surroundings

Has a fresh atmosphere and cool space with the Andes Mountains in the background. It is also home to the world›s highest climbing spot at 4,700metres and many other interesting outdoor activities.