Food and eating habits are something really ordinary in daily life. However, in different eras, people had concerns about different aspects of food and eating habits. In 2017, we saw the emergence of many food trends to meet the needs of food devotees around the world like low carb, eat clean, and organic food. So, which trends will draw the most attention in the near future?

Western experts are carrying out research on the benefits and effects of herbs and spices on human’s health and how to use these as a weapon against fatal diseases such as cancer and Alzheimer. Today, many researchers have successfully proven that herbs and spices make food tastier while improving overall health. Street food such as sauces, scallops with pickled ginger, bread served with spices, herbs, and chili sauce promise to become popular in the upcoming years. 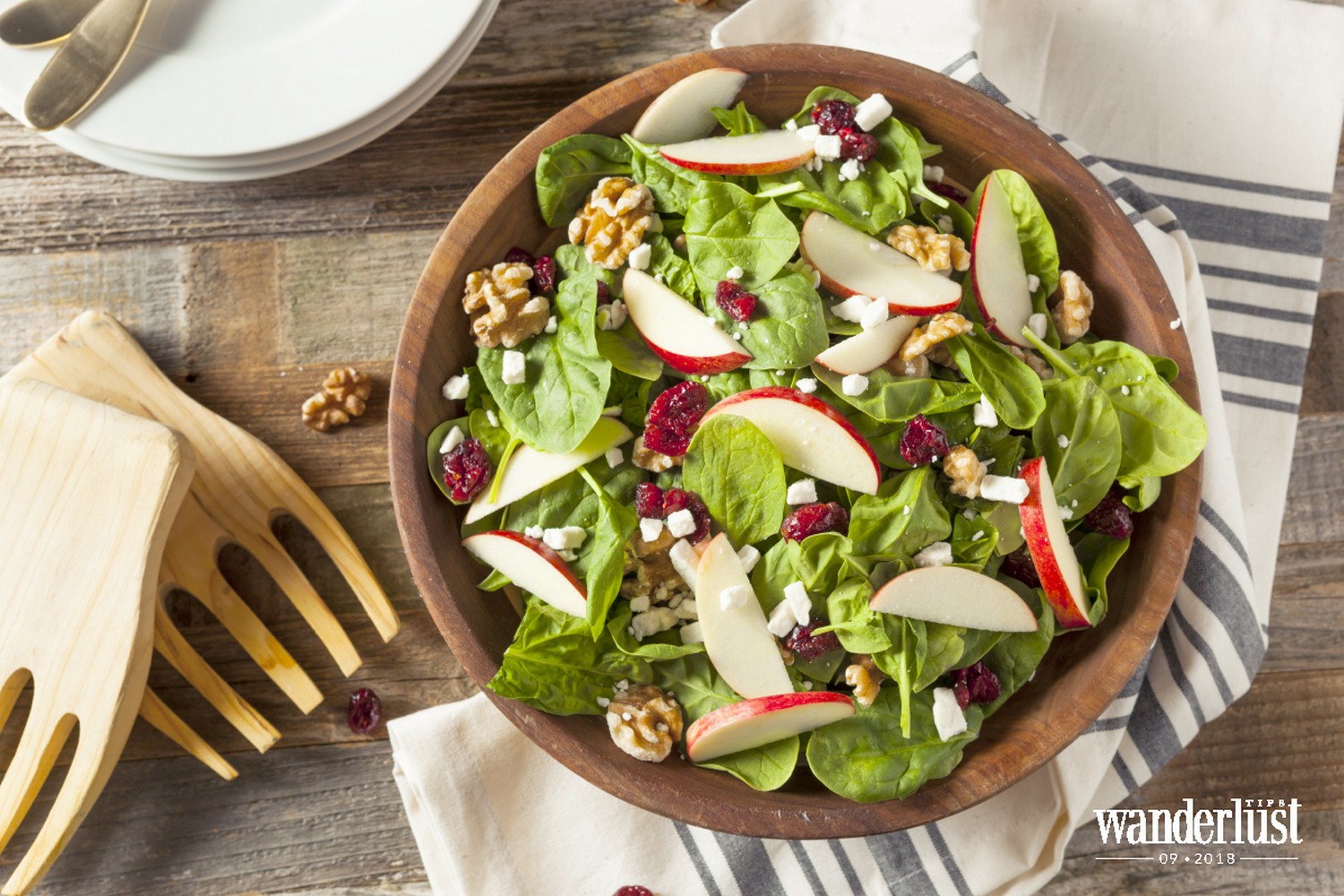 A recent research released by The New England Journal of Medicine shows that recipes with spices and herbs help to increase your life expectancy. Capsaicin, an active component of chili peppers, has been proven to reduce the risk of death from diseases like cancer and heart disease. A recent metaanalysis of pertinent studies posted in the Journal of Clinical Investigation revealed that capsaicin can activate receptors (biochemistry) in the lamina propria, which effectively reduces the risk of developing tumors. In fact, cancer tumors treated with capsaicin were about one-fifth the size of tumors in non-treated ones. And capsaicin has been shown to induce apoptosis in many different types of tumours.

Besides capsaicin a spicy component of hot pepper, many countries use other healthy hot spices in cooking such as saffron, cinnamon, ginger, cumin seeds, garlic, and mustard. In India, turmeric is the main spice for most dishes. Scientists believe that this is the reason why the number of people suffering from Alzheimer in India is less than 25% that of the United States. Curcumin powder can help you lose weight by helping to minimize cravings for excessive carbohydrates. In addition, turmeric with milk or tea is considered the best remedy for colds, coughs, arthritis, and dental problems. It is used to treat diseases associated with abdominal and liver pain. Also, turmeric can prevent or treat cancer and malignant tumours.

Cinnamon also has a lot of other impressive health benefits. In Japan, yatsuhashi, a mochi-like dessert, is considered an important part of New Year and other festivals. Its main ingredients include cinnamon, glutinous rice flour, sugar, red beans, brown beans, and soybeans. Or apple pie, a favourite dish in the United States, is famous for its crispy crust, soft apple filling, and fragrant cinnamon which is appealing to sweet lovers.

According to UNICEF, every 5 seconds, a child dies from malnutrition and hunger, while the world’s cattle consume a quantity of food that is enough to feed 8.7 billion people – more than the entire human population on Earth. By reducing the amount of food, cereals, vegetables, and fruits used to feed animals, we can solve world hunger. 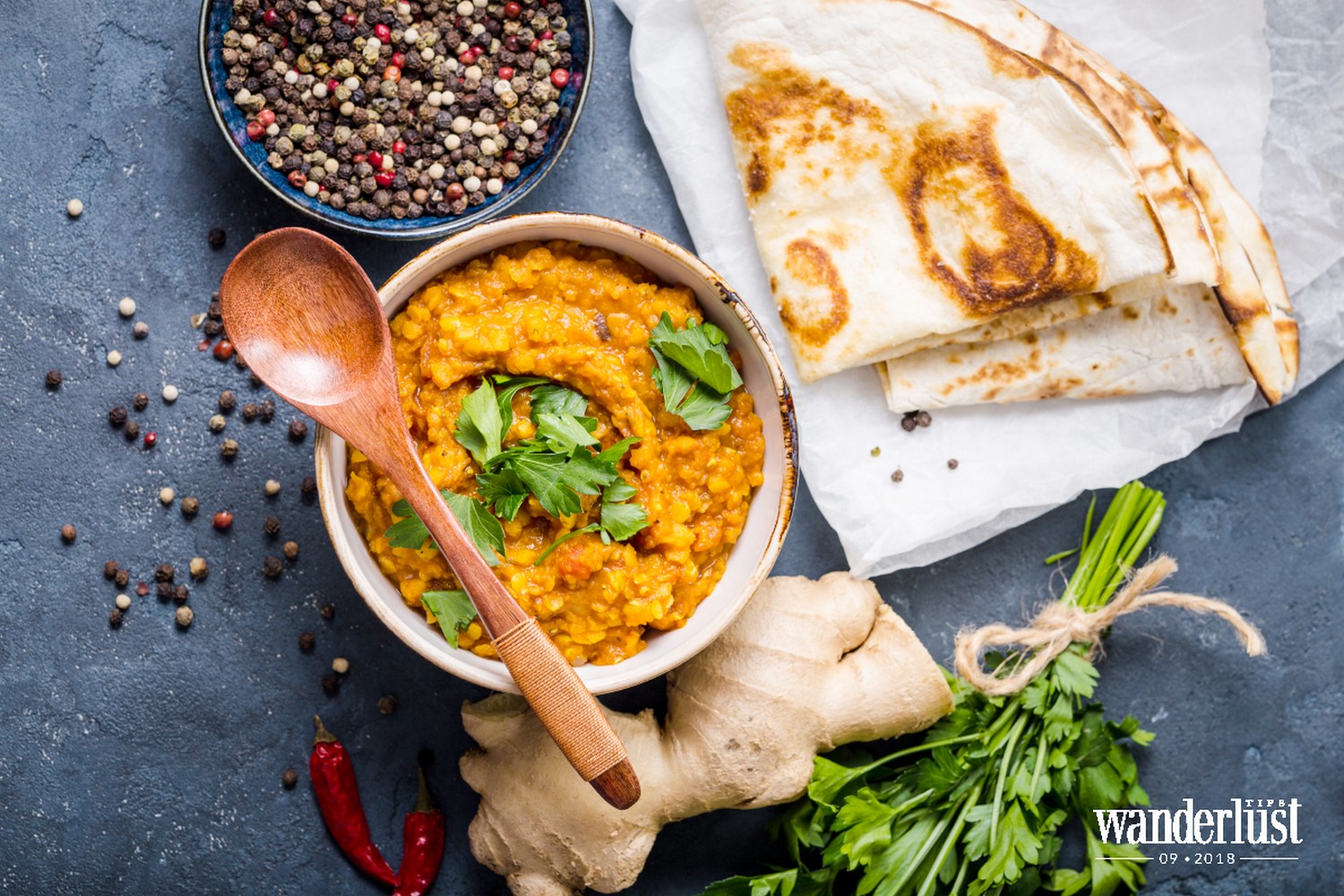 It is not a coincidence that restaurants around the world are beginning to add plant-based food/vegan dishes to their menus. The whole-food plant based diet (WFPB diet) is not the same as a vegan or a vegetarian diet, but it emphasizes minimally processed foods, focuses on plants  including vegetables, fruits, whole grains, legumes, seeds and nuts. Therefore, it limits or avoids  animal products and excludes refined foods. T. Colin Campbell proved in his book “Whole: Rethinking the Science of Nutrition” that WFPB can be highly effective in preventing, treating, and even reversing diabetes.

In a research published on The Journal of the American Medical Association JAMA, scientists have proven that if we can replace 3% of animal protein to plant protein, we can lower risk of death from heart disease. For example, people who discard 3% of calories from processed red meat (animal protein) can lower the risk of death by 34%. Therefore, a plantbased diet is beneficial for our overall health.

Have you ever heard about the red seaweed of Northern Ireland? Red seaweed grows in the cooler water of the North Atlantic and North Pacific oceans, from Canada to Scotland; it is used to replace potatoes in daily meals during bad crops. Known as dulse, this edible seaweed has been a secret staple of the Irish diet for more than 1,000 years, and helped entire coastal communities survive during the Great Famine. During the 7th and 8th century, the local law in the Irish text Críth Gablach stated that any traveller calling at one’s door should be offered a serving of dulse, and that a crop of dulse on a rock was as valuable as three cows. This ordinary dish has become a trendy one because it is rich in protein and minerals.

The world’s population has reached 7.6 billion, and we are trying to replace foods that contain toxic ingredients with healthy organic foods. Recently, the Food and Agriculture Organization (FAO) has released a report “Edible Insects – Future prospects for food and feed security”, in which they showed the health benefits of using insects for food. Whereby, FAO’s experts on entomophagy have shown that insects are healthy, rich in protein and contain good fats, and are high in calcium, iron, and zinc. Edible bugs and insects help reduce blood cholesterol, combat obesity, and provide calcium for adults and children. The nutritional value of insects is comparable to commonly eaten meats and eggs. Comparing the amount of protein in cicadas to other animals, we are able to see its nutritional value. The amount of protein in a cicada is 3.5 times higher than that of beef, 4.3 times higher than that of pork, 3 times higher than that of chicken, and 6 times higher than that of common carp. 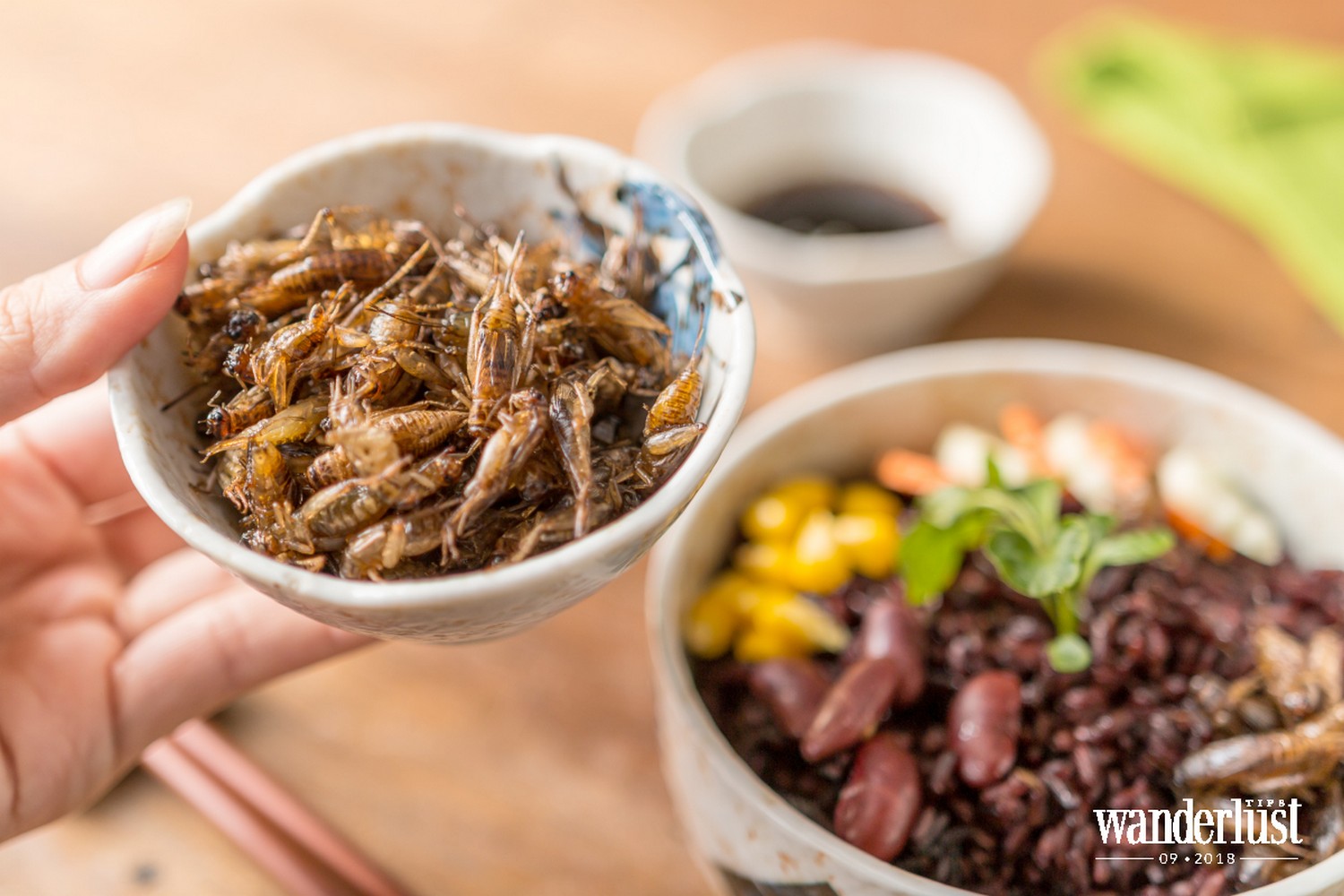 Statistics showed that many countries in the world embrace insects in their cuisine. In the United States and some countries in Europe, insect and bug sweets are considered a delicacy. Crickets or bee larvae covered in chocolate or made into candies are favorites in Texas. In Mexico, instead of buying popcorn and soft drinks to enjoy at the cinema or the football field, people often buy a dish of fried grasshoppers at street vendors.

Asia’s cuisine is famous for its variety of insect food. In Indonesia, dragonflies are collected, washed, and breaded before being fried. Meanwhile, one of the specialties of Singapore is roasted or grilled scorpion served with sparrowgrass, which tastes as good as grilled crabs. When travelling to Korea, besides well-known cuisine like tteokbokki, kimbap, kimchi soup, or jajangmyeon, you should also try a unique dish of this country, beondegi. It is a type of street food made with silkworm pupae. Koreans love beondegi very much, that is why you can easily find many food stalls selling it while wandering around street food stalls. Here, beondegi is a favourite for visitors.

Healthy foods are reshaping the food industry, showing the increasing concern of people about natural ingredients which can add colours to the food. Culinary experts also believe that floral inspiration will finally be in full bloom in the near future. Orchids, lavenders, and sunflowers are only a few flavours that will be featured to enhance the elegance and deliciousness of desserts such as gelatin, shortbreads, and milkshakes. 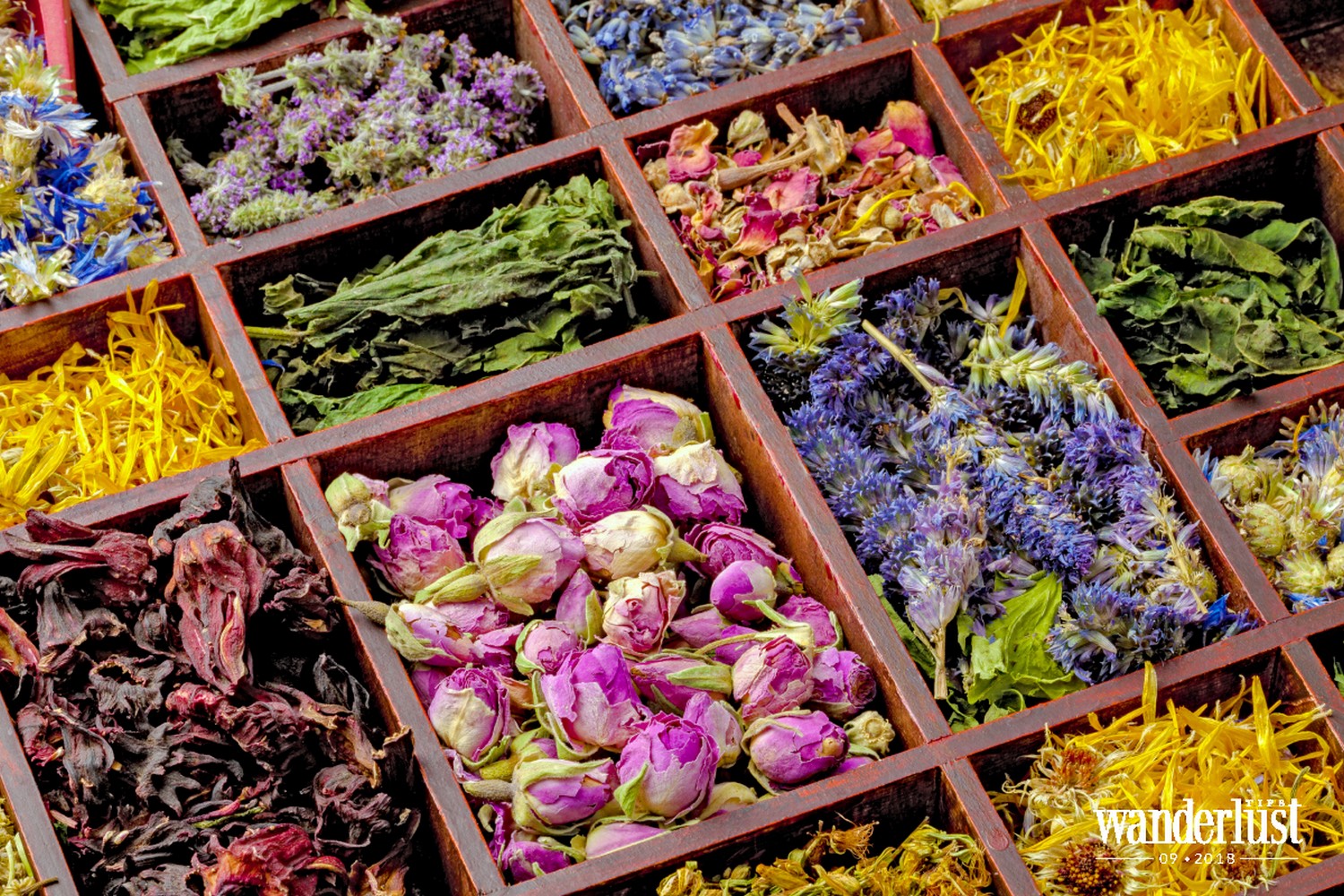 A long time ago, gardeners and talented chefs discovered a lot of edible flowers. However, today, as human tastes and food trends are changing, there are more dishes with refreshing flavours derived from flowers. Chefs do not only use flowers to decorate but soak them into beverages or add them to various kinds of snacks to create a sweet aroma in each dish.

Rose is most commonly used because of its beauty, fragrance, and nutrition. According to Li Shizhen, a Chinese polymath, physician, scientist, pharmacologist, herbalist, and acupuncturist of the Ming dynasty, based on the concept of Yin and Yang, rose is Yang and can be used to clear the blockage in energy and blood flow, reduce edema, and remove toxins. Modern researchers also prove that roses can improve blood circulation and metabolism, reduce the risk of heart disease, phlebitis and regulate the menstrual cycle. When blood circulation is improved, subcutaneous tissues are better nourished and look healthier. Rose water are used to create flavours for candy in Turkey or to make pistachio baklava – a kind of traditional dessert from countries in Central, Western Asia, and Northern Africa as well as on the Balkan Peninsula.

In addition, the dried petals of the tropical flower hibiscus are said to have the same flavour as blueberries. Hibiscus is used to make cakes in China and soft drinks in India. The hibiscus’s aroma can be mixed with roses, lavender, lemon, orange, apple, blueberries, honey, or cinnamon to create a sweetsmelling flavour. In addition, people also add Calendula to tea and soup in Germany, and use it as an ingredient in many dishes in the Mediterranean Sea. Many kinds of cocktails and gas drinks mixed with elderflower are luxury drinks used by the British royal family, and can be used to treat diabetes and high blood pressure.

According to the British daily newspaper The Guardian, fermented food is one of the food trends in 2018. Fermented foods have been present in family meals for many years, but recently, thanks to advanced science and technology, people have found a way to preserve them effectively so their nutrients remain for a long period of time. Moreover, adding fermented foods to your diet is one of the easiest ways to improve your health. Lactic acid produced during fermentation will promote the growth of the intestinal flora. It also helps to reduce harmful bacteria in the body, eliminates toxins, and improves the digestion and. absorption of nutrients. Recent studies show that fermented foods can help prevent many diseases such as neurological disorders, depression, Alzheimer’s, autism, and obesity. 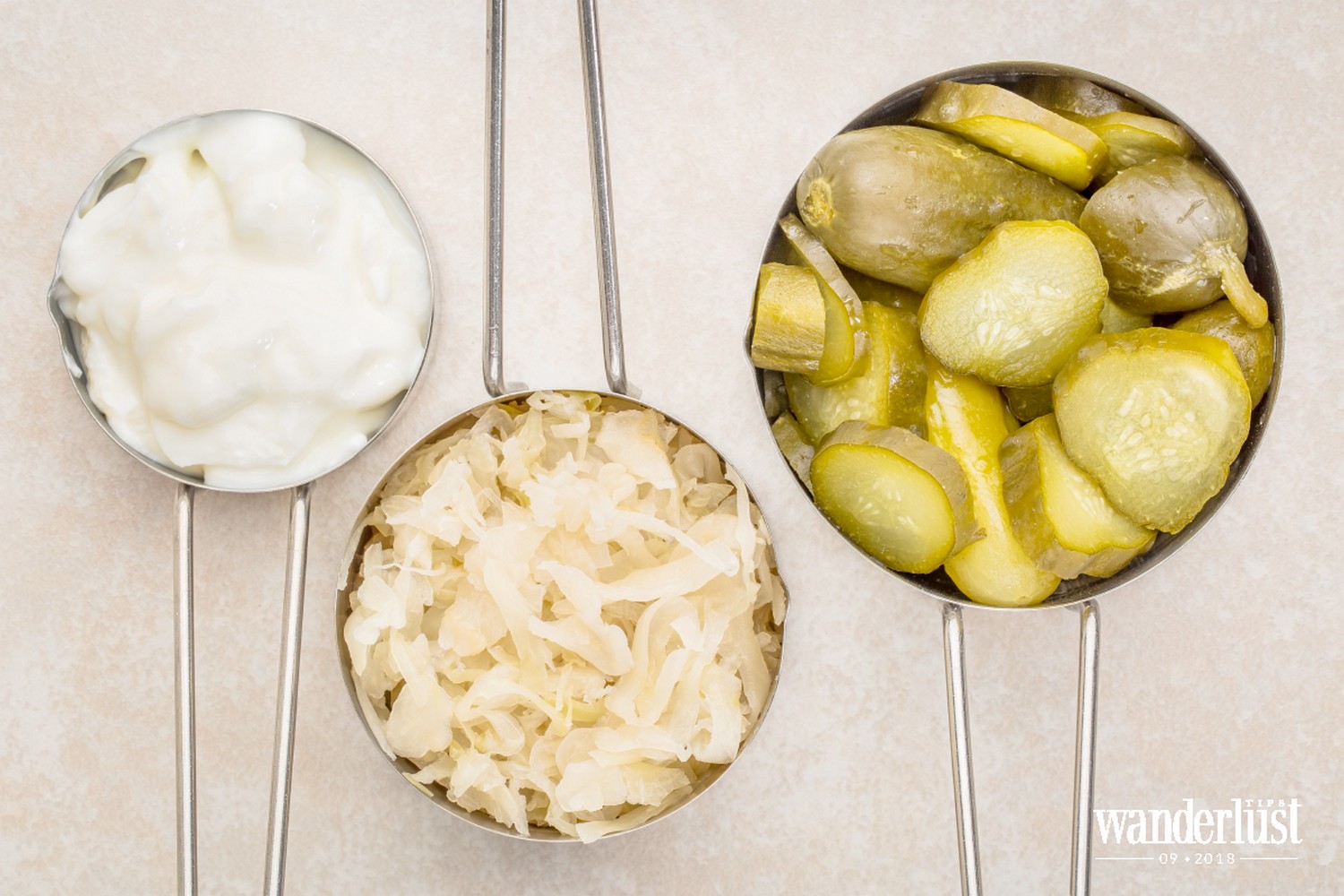 The four K’s: kimchi, kraut, kefir, and kombucha are very popular fermented foods. Kimchi is one of the most popular traditional pickles in the Korean Peninsula.

Kimchi is made by fermenting vegetables including napa cabbage, cabbage, and chili. It has a strong aroma and sour taste. On the Korean Peninsula, kimchi is served in daily meals, and is also used as an ingredient in many other dishes. Kraut (also known as sauerkraut in the United States) is a German pickled cabbage, made of finely chopped cabbages and fermented with lactic acid bacteria. The method used to make Kraut is similar to the way people use to make salted cucumber.

Kraut actually originated in China but became a typical German dish, then came to the United States with German immigrants. Kraut is not only present in German meals but also in Central Europe and Eastern Europe. Kefir is fermented milk that originated in the Caucasus Mountains, and has been used for hundreds of years. Kefir is traditionally made from cow’s milk but can also be made from goat, sheep, or buffalo milk. It looks like a smoothie and has a sour flavour. Kefir is rich in enzymes with beneficial bacteria that help balance the human digestive system; it also contains more nutrients and is more therapeutic than yogurt.

Kombucha is a fermented beverage which originates from China, widely popular in Russia, India and Japan, and then spread around the world. Kombucha is made with green tea, black tea, or white tea and then fermented for at least a week with sugar and the symbiosis among the fungus, bacteria, and yeast. This is a good drink for digestion and the immune system as it contains enzymes, amino acids, antioxidants, and polyphenols.