The journey to ziro was challenging and arduous, but the completely different way of life that i experienced in this peaceful wonderland gave me a sense of reward. Hidden in a pristine village is a modest, healthy lifestyle, close to nature in both the material and spiritual aspects of life. And perhaps that’s why the Apatanis are one of India’s most sustainable, long standing traditional tribes, remaining in isolation from the modern world.

HEALTHY LIVING THANKS TO UNUSUAL SPECIALTIES

Come to Ziro and you will have a lot of unexpected surprises just by walking around the markets, or exploring the kitchen corners of the indigenous people, though at first glance everything may look meagre.

Tapyo is a special traditional herbal salt of the Apatani. Although they inhale smoke daily, the respiratory system of the Apatani is still very good thanks to tapyo. Tapyo is prepared using herbaceous species from around the villages: in the majority of cases these are types of grass such as sarshe or pepu. As said by people living in the village, pepu can be used for the treatment of coughs, fever and as an antipyretic.

To prepare tapyo, people have to go through a series of steps. The base plant material after being collected is sun dried, then burned. The ashes are then collected and kept in a conical shaped bamboo apparatus called sader. Water is added gradually until the filtrate starts dripping from the bottom where it’s collected in a cauldron. Filtrate is then added to the pot filled with starch-laden water from boiled rice and placed on the fire for 5 to 7 hours. “About 15 litres of water is required to attain the desired thickness with the filtrate gradually being added until the solution attains a depth of approximately 3 centimetres,” said Punyo Assu, Komo’s wife.

After cooling, the solid solution is put on a leaf from a plant locally known as Lolly. The leaf is rolled, wrapped and kept above a vessel of fermented rice beer for three days. After three days, when the wet substance has absorbed the vapour of rice beer and has reached the suitable temperature, it is ready to consume. “It is very good for your health, it has iodine and can cure many diseases,” Komo said.

We glanced at the dish of salt, it was wet, had a light red colour and resembled dried red clay. Curiously, I ate my first piece of meat dipped in the salt. Tapyo is salty and sweet, and it was not exactly my cup of tea. But Komo said: “This spice always stimulates our taste buds. We have no sea, so we have used it for hundreds of years. Now we do have mineral salts, but we still like to eat this salt. Normally, it is sold for 6 US dollars per kilogram.” 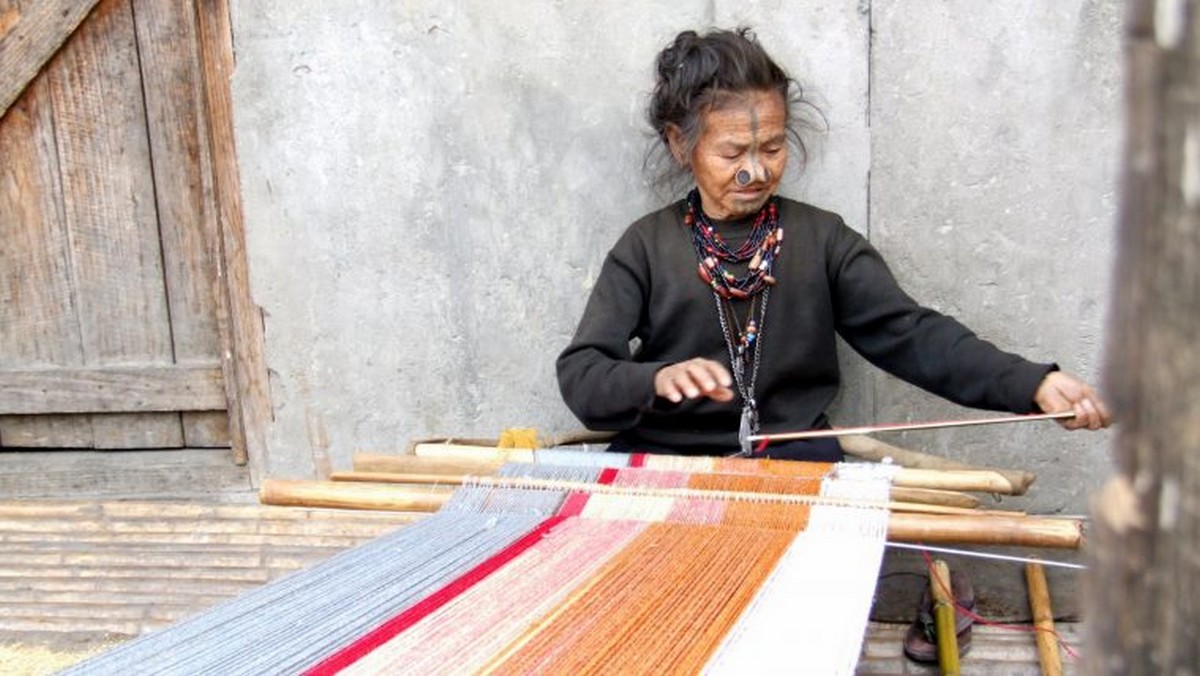 Besides the tapyo, we also tried Apatani’s 30-year-old smoked meat – it was black, very hard, and had a slightly unpleasant odour, but it is considered a great asset in every Apatani family. There are chunks of meat that have been preserved over half a century. And on every important occasion they use only a small piece of meat to offer ancestors and gods.

When we finished the meat, Punyo Assu brought out and baked some tiny fish, which were as small as fingers. Then he shared the fish with us. Michi Tajo explained that these fish were valuable food here. The fish are farmed in the field, but farmers cannot farm too much fish, that’s why in Ziro they are sold at high prices. We understood that we were lucky guests

When observing the living habits of the Apatani, I realised their life has a strong bond with nature. And in fact, the Apatani are one of a very few tribes left in the world worshiping nature. White flags bearing the symbol of the moon and the red sun are erected throughout the Apatani’s bamboo villages. This flag originated from a special religion called Danyi-Piilo practiced by the Apatani, praying to the Sun (Ayo Danyii) and the Moon (Atoh Piilo). “Danyii-Piilo is God, the source of light guiding human lives, the energy of life, and also the guardian of the creatures in the world,” Bullo Boga, an Apatani shaman said. 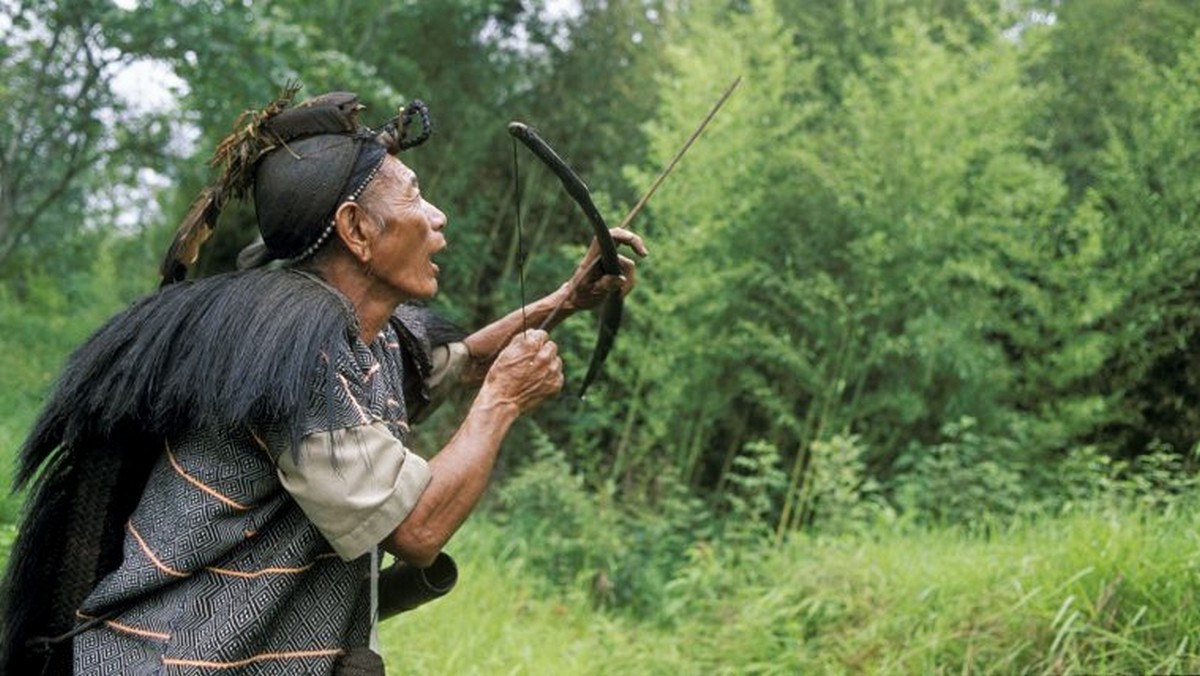 In the spiritual life of the Apatani, the moon and the sun are like parents and represent truth, justice, beauty, morality, love and goodness. There are also rituals with special sacrifices to show respect and gratitude to Danyi Piilo. Apatanians have two major festivals, Myoko and Dree.

Myoko is the Spring Festival, celebrating friendship and prosperity. This festival is held over the course of 10 days from 20th to 30th March every year. On these days, men carry leaves from the forest to make a Nago (makeshift hut) for the ancestors to come, rest and watch the festivities. At the Myoko festival, the tribal shaman slaughters pigs, chicken and mithuns at dawn as a sacrifice. This festival is one of the most important ones for the community. The Apatani send their prayers for prosperity and love during the Myoko festival.

Unlike Myoko, the Dree festival is an agricultural festival, held from 4th to 7th July every year. The Apatani believe that Dree will help them have a successful harvest. At this festival, villagers sacrifice birds, eggs, chicken and mithun for the four main gods: Tamu, Metii, Danyi and Harniang. Tamu wards off insects and pests, Metii prohibits epidemics and other human ailments, Harniang keeps the soil fertile to prevent drought and Danyi protects the Apatani community and gives them a prosperous life.

Having a close bond to nature there are mascots symbolising the power and prosperity of the Apatani tribe namely wild cows living in the forest, also known as gayal or mithun. In many families, you can see a mithun horn hanging solemnly in the middle of the house. The Apatani never call mithuns “it”, but always “Mr Mithun”. When we asked if they go to the forest to hunt for mithun, Taro corrected: “We do not hunt but invite him. Mithun loves salt, so it’s easy to seduce and tam him”. Mithun has a very high value in Apatani beliefs and thus, mithun sacrifice has been a longstanding custom in traditional local rituals like weddings.

Even though a girl living in the modern world like me found it hard to get used to many of the customs here or eat the specialties that the Apatanians have been cooking for generations, deep down I realised that the root of the enduring strength of this tribe is the bond with and respect for Mother Nature shown in every ritual, lifestyle and belief.