Whenever thinking of the sea, most people in the South think of Vung Tau; when they miss the mist of the mountain, the cold and green of the forest, people will recall Dalat, the sweet valley with its fragrant fowers located on the highest altitude in the Southeast. 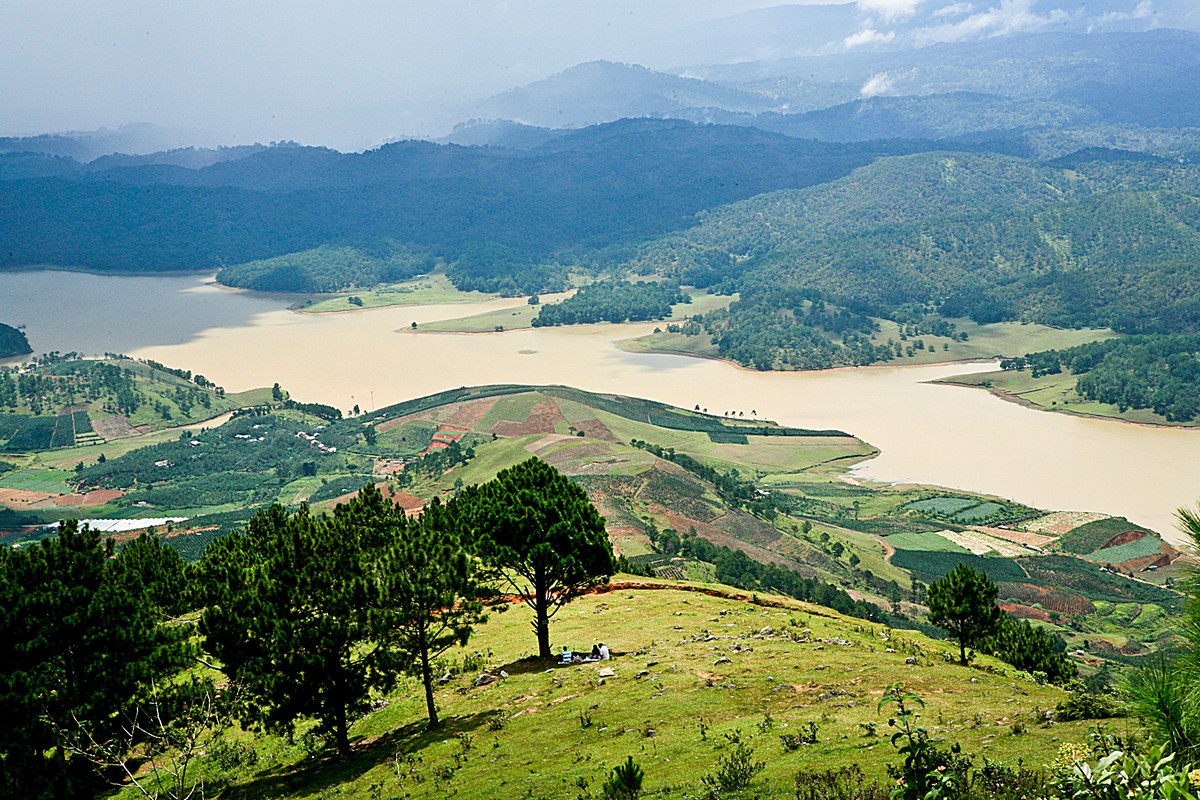 Located about 300 kilometres Northwest of Saigon – not far enough to take a fight, not close enough to go by motorcycle. But travelling on the road from Saigon to Dalat is an interesting experience. Let’s start at Dau Giay crossroad, the turning point from National Highway 1A to National Highway 20 leading West. The scenery changes gradually along the way, houses are sparse and smaller, the sky looks broader. Do not get annoyed by dust and bad roads, just continue going on National Highway 20 for over 100 kilometres to reach Bao Loc Pass. The vegetation changes from rubber trees to tropical plants and the temperature drops.

Just up Bao Loc Pass, you will feel a cool breeze from the valley, see green forest trees and hear melodious singing of the birds. Here, visitors can begin their trekking journey. The tea hills, rice paddies and cornfelds intermingle with rural houses. Travelling 100 kilometres further, to go over the Freen Pass, remember to open your eyes to admire the pine forest and enjoy the cool mist. Dalat is at the end of the road, where the wind turbines intervene with peaked-roof houses.

Going to the Northern outskirts of Dalat, towards the Golden Valley, passing through the winding mountain roads, and heading to an unknown trail, here, visitors can immerse into the fresh atmosphere of the pine forest. In the evening, you can set up a fre, eat grilled chicken or grilled fsh and enjoy the cold air of this vast land, sometimes the wind bursts into the tent, sounding like a rain storm. When waking up in the forest, if lucky visitors will see sparkling early morning frost cover the grass like snow.

A TASTE OF FRANCE 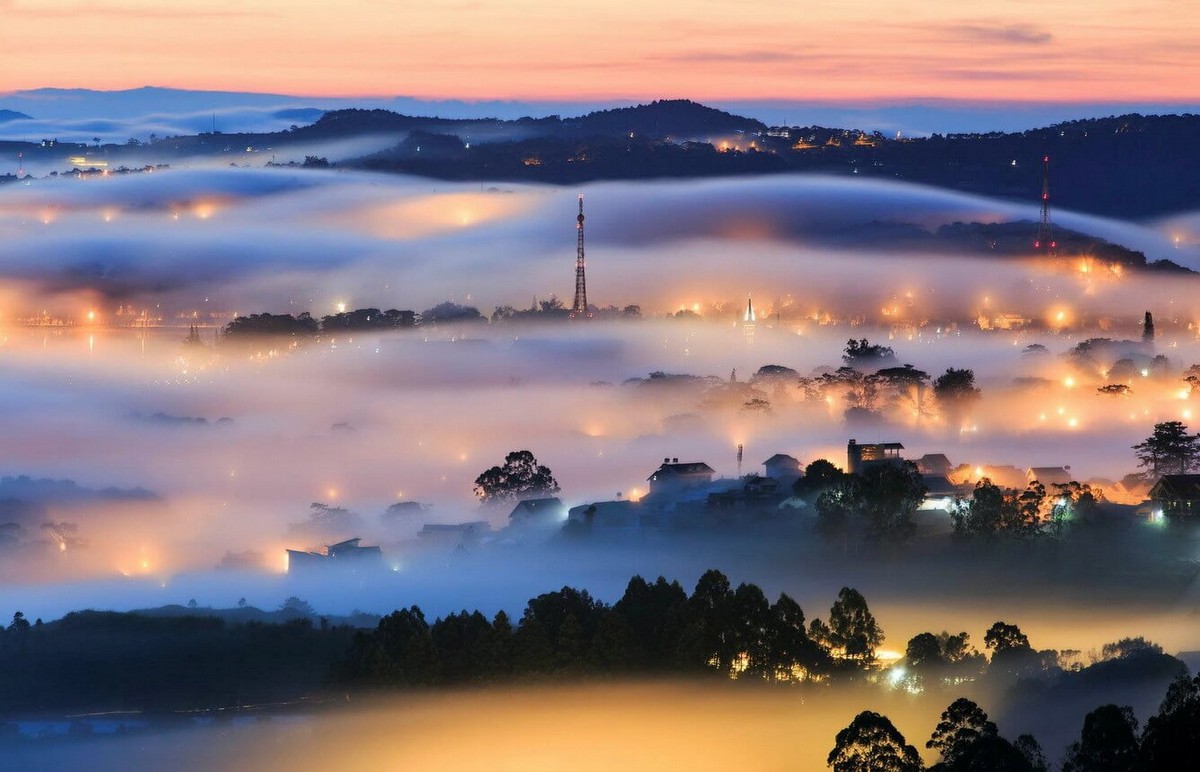 The central area of Dalat is at the roundabout of Hoa Binh Market and dubbed the heart of Dalat. In the frst half of the 20th century, the French developed the Lam Vien Plateau to become a resort. A market built of trees was erected in 1929 but burned down in 1937, after that it was rebuilt with bricks and is currently the location of 30 April Cinema. In 1958, the empty land in the valley next to the Tree Market was planed and built into the frst foor market in Vietnam at that time, including two foors and a terrace. By 1993, Hoa Binh Market had been upgraded and became the main commercial centre in Dalat.

Hoa Binh Market is located on Nguyen Thi Minh Khai Street. The space around and behind the market is full of food stalls and accommodation. On those streets of Le Thi Hong Gam, Nguyen Chi Thanh, Bui Thi Xuan and Phan Boi Chau, there are hotels and lodging-houses close together with very affordable rent. In the centre of Dalat just walk down the street to see a lot of people, cars, food, and live music (from young people gathering and singing). In general, like in other cities in the morning, the traffc is busy and at night all the lights are turned on. Visitors living on the high foor of a hotel can admire Xuan Huong Lake, and the top of St. Nicholas Cathedral in the early morning fog.

If you feel intimidated because of the crowds, just go out of the central area. Along Tran Hung Dao Street, there is the isolated and quiet Cadasa Villa Resort. When stepping in the resort, visitors will feel a taste of France. Remaining with the spirit of French architecture of the frst half of the 20th century, the restorers of Cadasa Resort wanted to bring the old memory and history of Dalat in the hearts of tourists.

Every item, piece of furniture, freplace, towel hanger and chandelier looks like they got lost in this villa in another century. Tran Hung Dao Street is wide and quiet, every spring, the peach flowers bloom beautifully along the road. 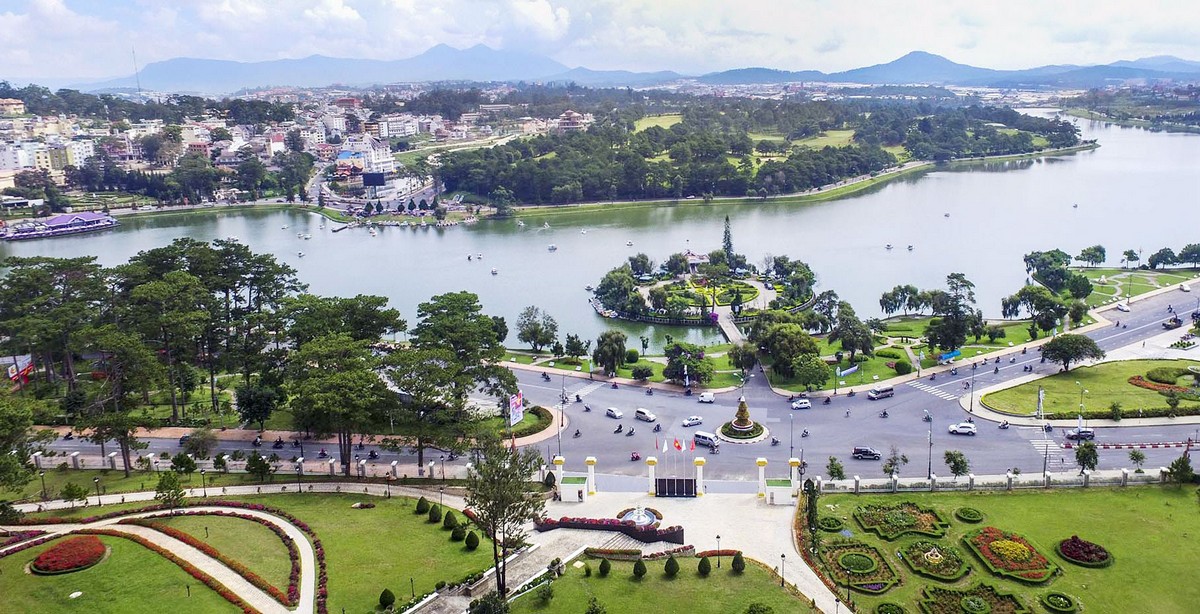 If allies are a special feature of Saigon, then slopes are Dalat’s equivalent. There are many slopes like Lo River, Nha Lang, Tin Lanh (Protestant), Anh Sang (Light), Nha Bo Slope, there are rocky slopes, slopes full of blossoms, foggy slopes and sunny slopes which have become unique features of this wonderland. Slopes in Dalat are often compared to staircases in the middle of heaven.

Some people come to Dalat to stay in the heart of the city and because of the cold nights, they need another person’s warmth. But for some other people, they choose to leave the city to try a ride through the pine forest, walk down the unmarked slopes, sit in a street café on an old leather bench, close their eyes, listen carefully, take a deep breath and get lost in this wonderful land.

Whenever thinking of the sea, most people in the South think of Vung Tau; when they miss the mist of the mountain, the cold and green of the forest, people will recall Dalat, the sweet valley with its fragrant fowers located on the highest altitude in the Southeast. 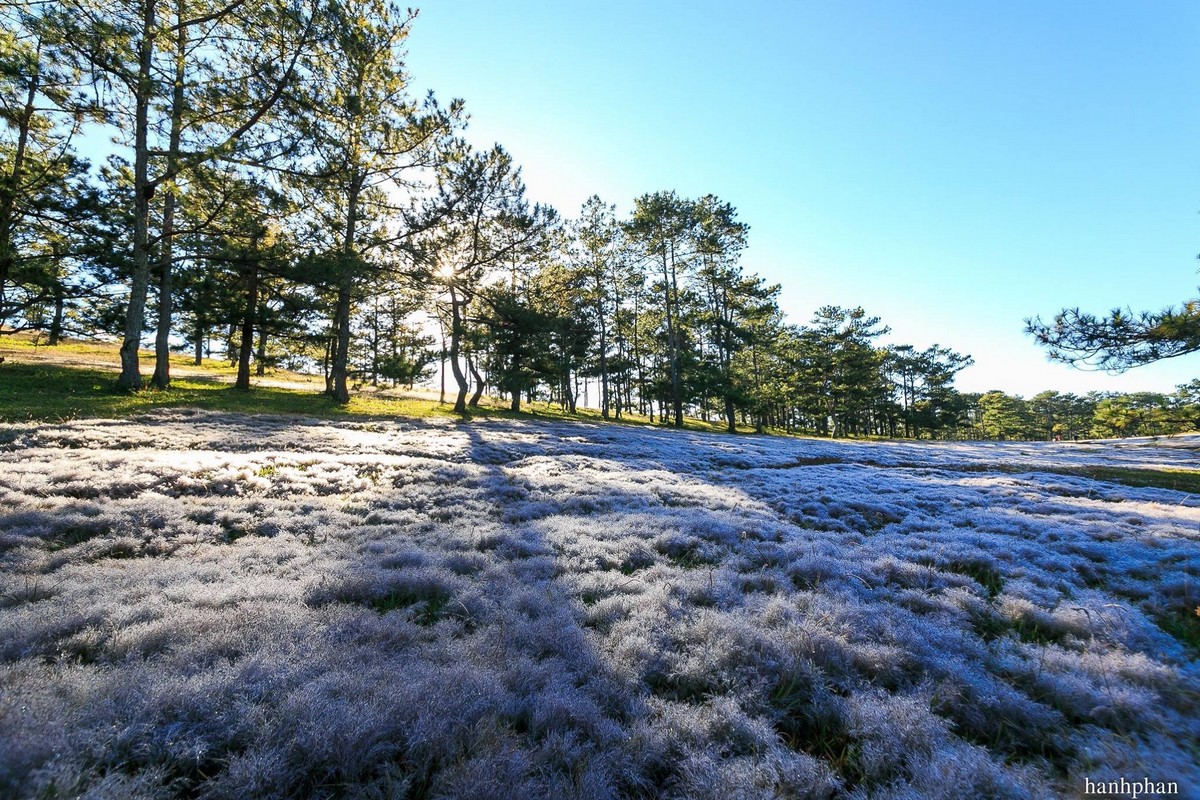 ♦ From Ho Chi Minh City, you can go to Dau Giay intersecton, turn lef and follow Natonal Highway 20 to Dalat. Travelling by motorbike can take from 8 to 12 hours.

♦ If you are not planning to travel by motorbike, you can take a passenger car from Thanh Buoi, Phuong Trang, Thinh Phat Limousine, or The Sinh Tourist (tcket prices range from VND170,000 to 250,000, depending on the season). Travelling by car can take from 6 to 8 hours.

♦ If you live in other provinces, you can catch a fight from your local airport and it will land at Lien Khuong Airport, Duc Trong.

♦ Along the central roads like Nguyen Chi Thanh and Bui Thi Xuan, there are places for rentng motorbikes, ranging from VND90,000 to 150,000/day, depending on the type of vehicle.

♦ If you like the nostalgic feeling in Dalat, you can contact@nhacuasuadalat to rent a Honda 50 Cub motorcycle to travel along Xuan Huong Lake. When rentng a motorbike, remember to ask how to handle common problems on the road such as a punctured tre or broken motorbike.

♦ Get your motorbike owner’s phone number and the phone number of a motorbike repairer, when you go to the suburbs it will be very difcult to fnd a place to patch tres.

♦ Dalat is most beautful from the end of October to March. This is the tme when the rainy season fnishes and a new season begins. The rainy season in Dalat is also very poetc, though it slightly cold.

♦ Dalat has a temperate, mountainous climate, with annual temperatures ranging from 18°C to 25°C, it’s colder at night and early morning. Warm clothes and scarves are extremely important for keeping warm and taking beautful photos.

The main shopping area of Dalat is Dalat Market in Hoa Binh Area. In additon, there is a second-hand market in the evening, open daily from 5pm to afer 9pm, selling a lot of hats and used clothes at bargain prices. You should ask about prices before buying or eatng anything.

You can stay in luxury resorts for several million VND per night, or common hotels or a homestay for a few hundred thousand VND per night. Dalat has many places to stay, but if you visit Dalat in peak season, you should book in advance. Dalat is always out of rooms and prices are much higher in the holiday seasons of Vietnam.