The Apatani tribe has migrated to and been living in Ziro Valley, Arunachal Pradesh, India for centuries and they have left unique cultural marks on this beautiful land. However Ziro Valley is also a little explored part of the world and few people have set foot here. All these factors inspired us to explore the mystery of this legendary place.

After four international and domestic flights, we were happily travelling to Ziro Valley (Bang Arunachal, India). But all of us were blocked at Guwahati Airport (State of Assam) because Ziro Valley is in a sensitive area. Travellers must be issued travel documents by the government, if they want to enter Ziro Valley. 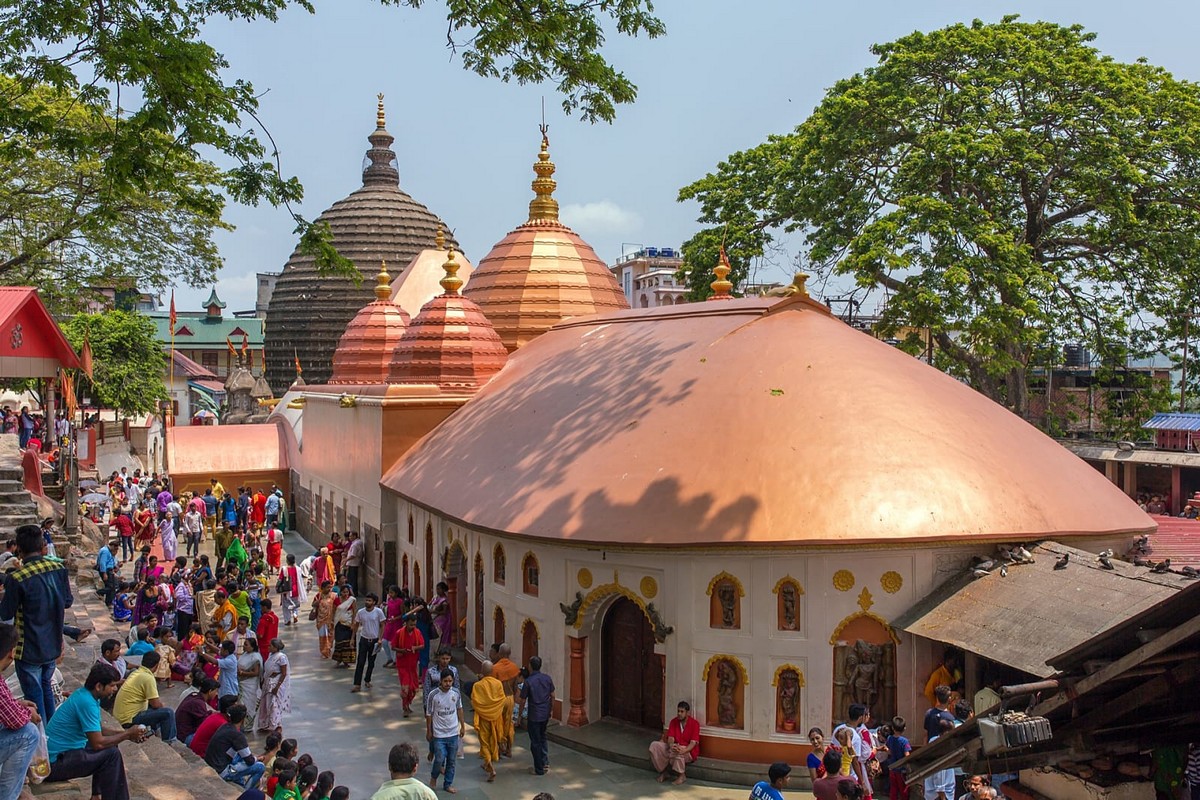 A female staff at the travel office explained to us: “This is a sensitive border area, so many roadblocks were set up to prevent suspicious people from entering Ziro. Without travel documents, no one is allowed to enter Ziro. And in case you try to enter Ziro illegally and are detected, you would be heavily fined before being deported from the country. And if you want to obtain a travel document, you have to go to Guwahati.”

Well, if you ask me how Guwahati is, I must say it may not be as pretty as you might like to imagine. After our long arrival trip on four different planes, we wanted to drink a cup of coffee in a quiet air-conditioned café. But it was bizarre: we could not find any cafés in Guwahati. There are only substandard, hot, crummy food stalls. And even if we had managed to find a café, this being such a populated country, there would be no seats left for us. That was the start to four days being hustled, pushed and bumped around. Sometimes we were even touched seemingly by accident when some guys passed by us on the streets. Well, at least no one accidentally spit in our faces.Guwahati is a stuffy, crowded, noisy, cluttered, crummy city. People here stand, walk, run and talk loudly everywhere, on the road and on the sidewalks as they are looking for an opportunity to make their living.

It was horrible to be stuck in Guwahati for four days, just waiting. We waited two days for the working week to start so we could ask permission to enter the border area, and a day to get the travel document, and another day to get to Ziro. Those were really four tiring and boring days. My excitement and motivation when travelling to one of the four Cradles of Humankind somehow faded away. We counted every hour to board a train to go to Ziro, where a lot of mysterious myths are hidden.

LESSONS FROM THE APATANI PEOPLE 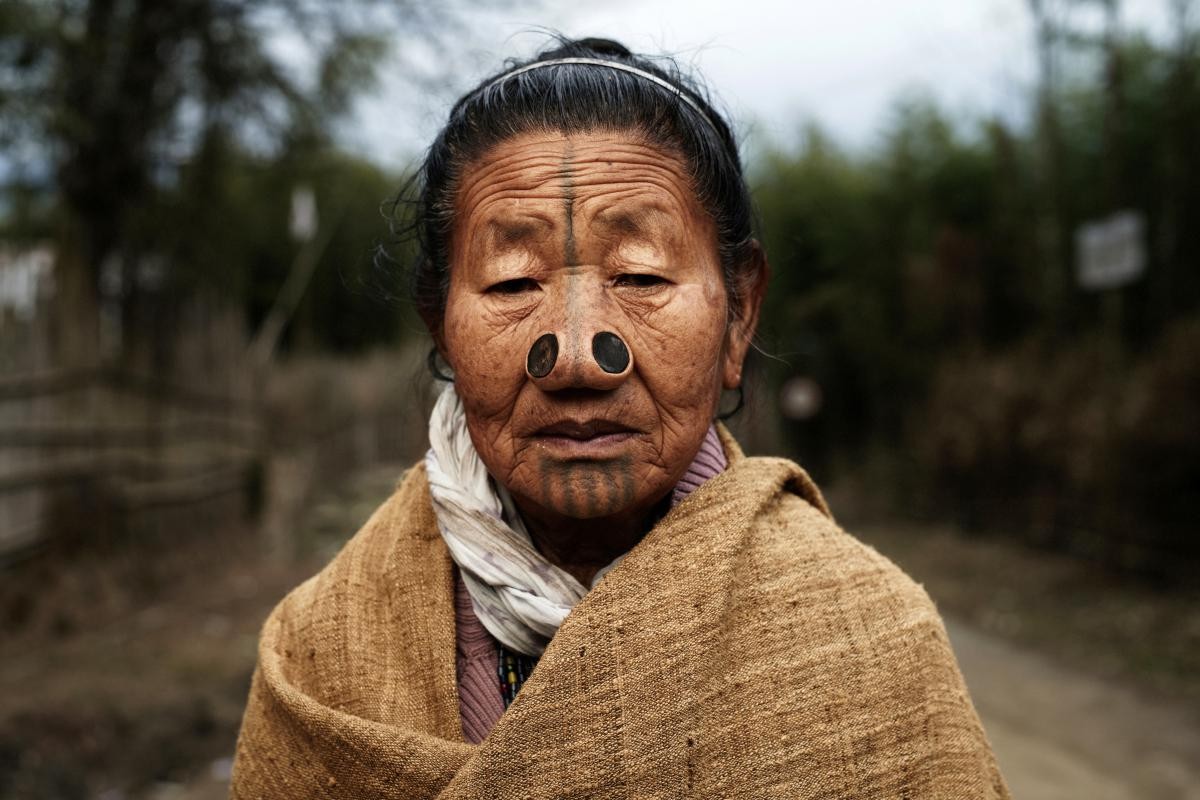 After getting the travel document to enter Ziro, we went to Intalagal Town, Arunachal State by night-train before we arrived in Ziro. After more than eight hours travelling, Intalagal Town appeared amidst white mist in the hills. From Intalagal, our group had to travel 15 kilometres by bus to the centre of Nahalagal Town. From there, we bought a bus ticket to Ziro. Along the way from Intalagal to Ziro, we constantly encountered roadblocks. The handsome Tibetan driver revealed: “This area does not allow Chinese people to enter so the soldiers check carefully.”
After four-hour travelling on sloping mountain roads, we were all tired. Although we were still tired after resting just half a day, we met our guide Michi Tajo and began the journey of exploring the culture of the Apatani tribe of hundreds of years ago and were charmed not only by the beauty, but also by the lovely stories of the
land and people here.

Tajo drove us into the ancient villages of the Apatani, I felt like I waswalking into a labyrinth of bamboo houses with towering bamboo rows stretching along the sides of the road. The peacefulness and freshness of this place was a contrast to the hustle and bustle that we had just experienced in Guwahati. That made me even more curious about the Apatani people who have kept Ziro Valley so beautiful and so peaceful for hundreds of years.

Apatani people have special ways of growing rice. They learned how to create a system of zigzag water channels from inside the mountain. And this source of water can provide enough water for a whole field in Ziro Valley. “Our water system is a great accomplishment in agriculture. Apatanians, unlike other tribes, lived a nomadic life and deforest for farming,” said the Apatanian guide proudly.

Indeed, the Apatani are extremely different in the way they work to save and preserve nature, especially the forests. They chose to improve agricultural land on flat ground, so they make use of paddy rice cultivation combined with fish farming in the field. It is surprising that rice productivity of the Apatani is very high without using animal power, industrial machinery, or spraying chemicals. Instead they create effective and sustainable farming methods and they have succeeded beyond expectation. In April 2014, the Apatani cultural landscape was added to Unesco’s World Heritage List. That is completely earned as the Apatanians have made their best effort to protect their beautiful valley. Two days staying with Tajo’s family, I understood that the Apatanians think that everything existing on
this planet has a soul, all play certain roles in human life, so the Apatanians always live in harmony and closeness with nature.

Therefore, they still live in simple bamboo houses built on a sturdy wooden floors. In the main room of each house, there are many marks of an ancient culture like fireplaces, spears, armour, mithun horns and giant ten-year-cured meat lumps hang in the kitchen. Their houses are simple, full of amenities and clean, this made me somewhat embarrassed by the way we live and spend our daily lives in modern cities without thinking about the consequence we leave for future generations.

MYTHS OF THE ANCIENT APATANI WOMEN 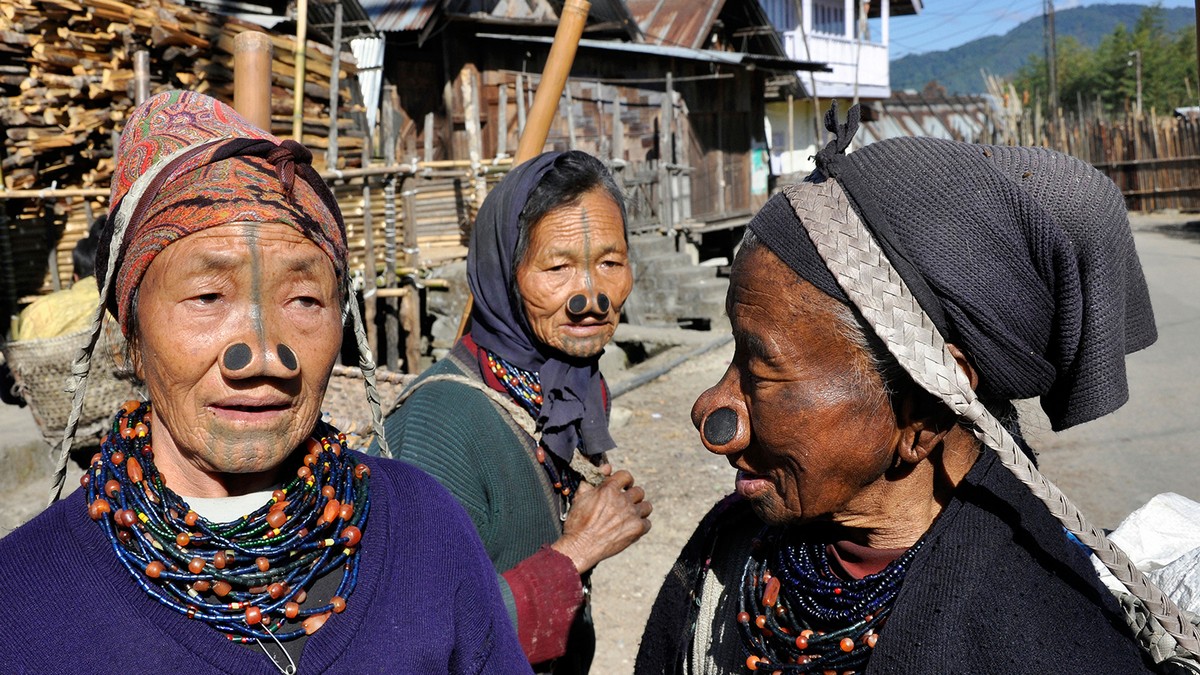 No words can describe my feelings when I met Apatani ladies with their two big nose piercings and strange tattoos on their faces. It is an indescribable sense of relief when hearing of these incredible myths that seem so apart from us – an infinite distance of space and time. Similar to Chin women with their stunning facial ink in western Myanmar, the story of Apatani women wearing bizarre nose plugs was just word of mouth. Apparently, Apatani women have always been considered the most beautiful among the Arunachal tribes and they caught the eyes of men of other tribes. So they were often abducted. Therefore, to protect themselves, many women in the village have thought of ways to camouflage or making themselves ugly by plugging their nose and tattooing their face. Gradually, the Apatani women became ugly with two malformed nostrils and tattooed faces. Then, gradually, these tattooed faces became the beauty standard for Apatani women. Girls who do not have two big buttons in their noses were even considered ugly and unattractive.

All the older Apatani women in the village do not know how old they are, but they all firmly remember that at the age of 8 – 10, they plugged their noses. And after a short while, their mother would put a larger piece of bamboo into their noses, causing the beautiful noses to deform. When the piece of bamboo in their nose was as big as a penny, it would be replaced with a piece of rattan used until the end of the woman’s life.

Every time when stepping in the kitchen, Apatani women often get soot from a pot and then apply it on the plug to make it smooth and eye-catching on the big nose. But that is a custom of the past. Since 1975, integration has begun to slip into Ziro Valley, drawing the Apatani community closer to the “civilised” life of large Indian cities. Now, the big nose with two shiny black plugs on women’s faces has become a barrier to the integration of the Apatani community.

At a time when plugged noses and tattooed faces are no longer considered beautiful, the old women have to accept a lonely life in the old villages of Ziro Valley. On the day we went to Mrs Ruliing’s house in Tajang Village, she said that it has been more than two months since someone has visited her. From the day she lost her husband, like other women with plugged noses, she lived alone in the shadowed bamboo house. The weather is colder when the sun goes down. Making a glass of hot drink, Mrs Ruliing said her children have moved to Hapoli Town a long time ago. They are living a vibrant city life, unlike that in an old village like Ziro Valley. 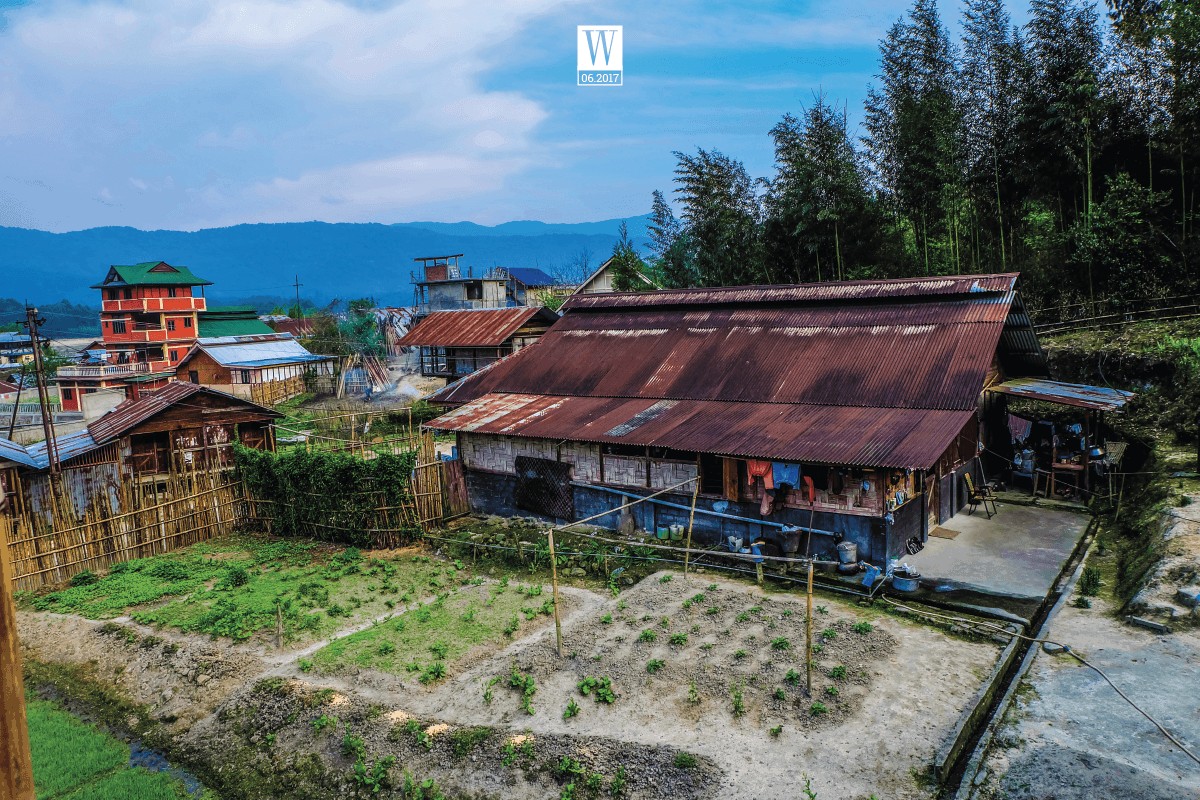