En cave is located in the centre of the limestone mountain range of Phong Nha – Ke Bang national park, Quang Binh province, Vietnam. It is the world’s 3RD largest cave, surpassed only by Son Doong in Vietnam and Deer cave in Malaysia.

THE JOURNEY IS WHAT BRINGS US HAPPINESS, NOT JUST THE DESTINATION 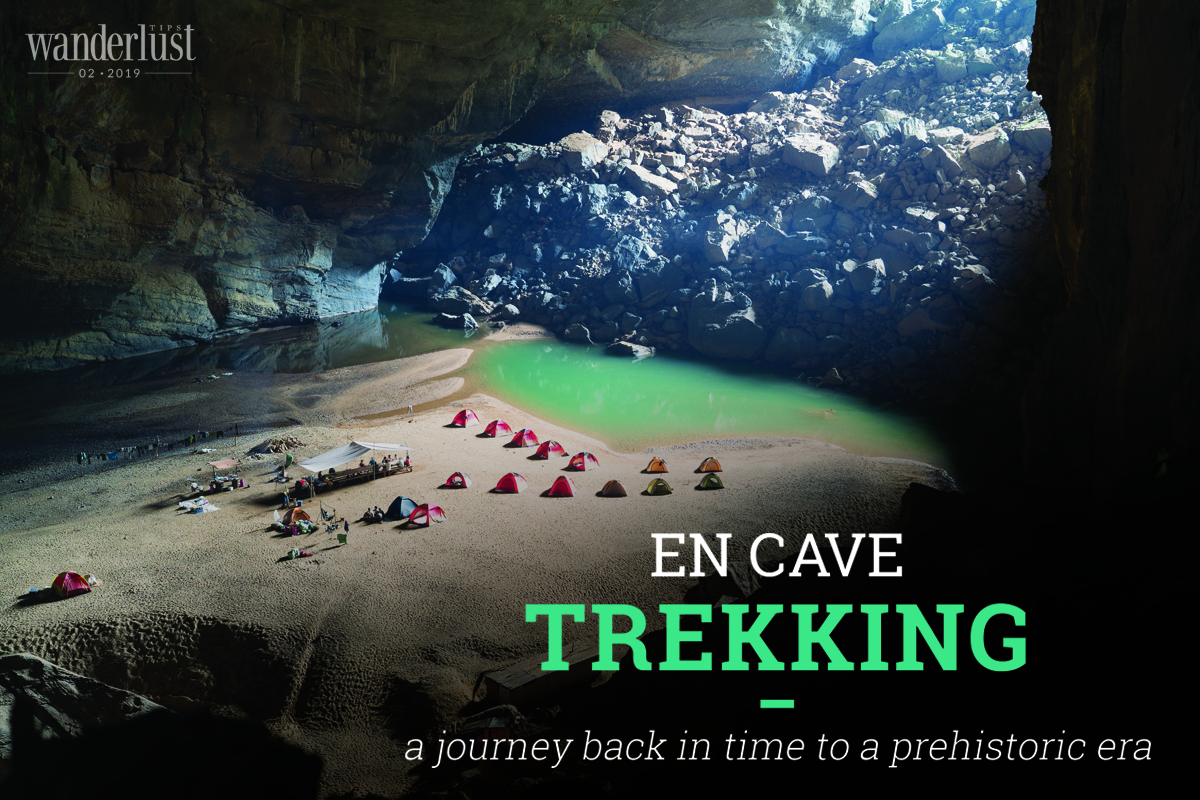 We started our journey by crossing the 2-kilometre high bumpy slope of Ba Giang. The trail is just wide enough for a person and quite slippery, at times we were forced to climb over fallen trees or crawl through arches made of vines. In return for my effort, I was granted the chance to admire towering old-growth forest with vines wrapping around the trunks of the trees, snails and squirrels along with many kinds of insects and birds. A sense of journeying back in time to a prehistoric era came to me when we walked through the primeval forest.

Crossing the slopes of Ba Giang, we arrived at Rao Thuong Valley, surrounded by the stream of the same name. We crossed through the valley and its streams at the foot of the mountain with its green grass and thick vegetation and listened to the birds singing. The most thrilling moments happened when we waded through the stream where the water was cool and so clear that we could see the pebbles at the bottom and the fish swimming in the middle of the swift current. We came across impressive butterflies of all shapes and colours: yellow, white, blue and black on the trail and around the streams, gathering in clusters on the ground looking like blooming flowers. Sensing the movement of people, they flew up in circles around our feet. Walking amidst the butterflies, watching their fragile wings in the silent transparent space, I thought I was walking in a beautiful dream. 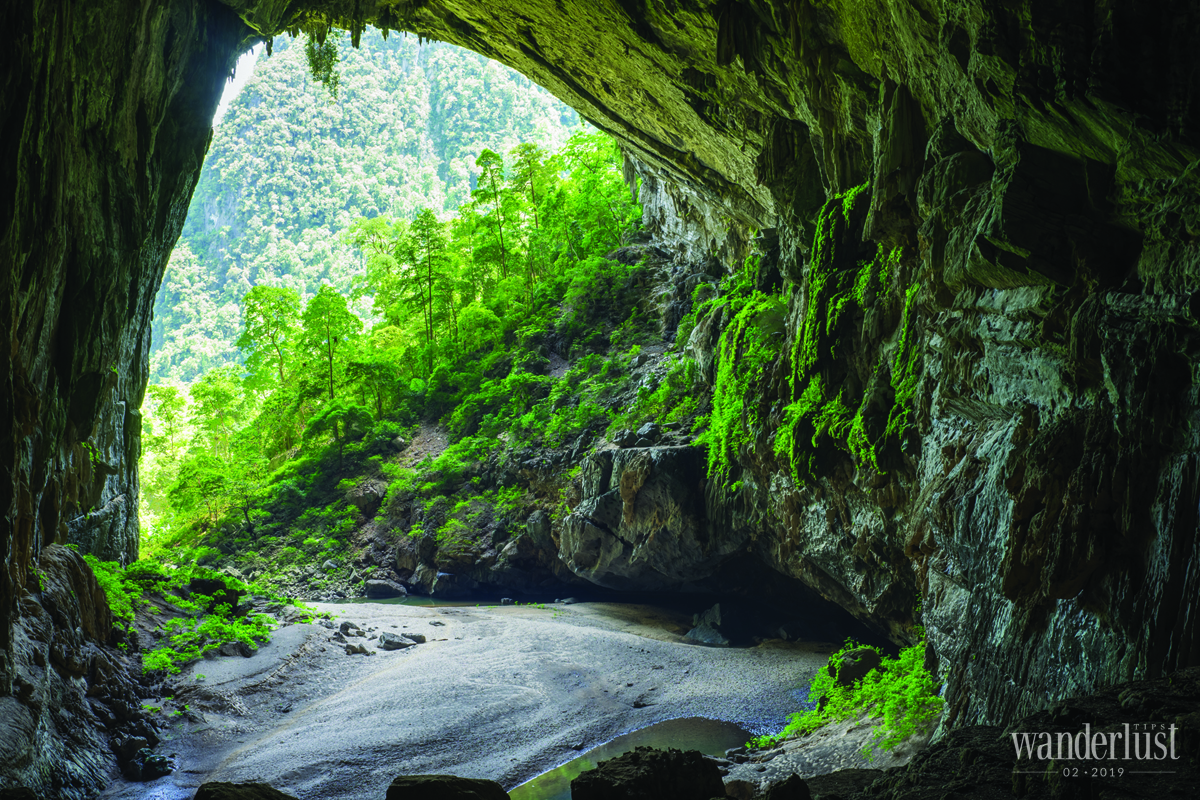 Đoòng Village brought me back to reality, though a reality very different from the hectic life of the modern world. The village has only about ten houses, home to about 30 people making their living from farming and forest products. Just looking at their tanned skin and austere features revealed how hard their lives are, despite this there was no expression of anxiety or scepticism on their faces. They were always kind and friendly, their eyes and smile expressing true innocence and honesty. I sincerely hope that the visits of many travellers like us will only bring a little more joy to their life, but not change the calm and peaceful beat in the hearts of these gracious people.

The path from the Đoòng Village to En Cave was easy to traverse and particularly stunning. On both sides of the path, we saw clumps of wild sugar cane and flat green grass. With the vast expanse of sky above our heads, we marvelled at the mountain ranges covered with green trees, long streaky clouds and light blue sky surrounding the mountain peaks. From 1 kilometre, the massive mouth of En Cave presents itself, and believe me the fatigue when you have travelled more than 10 kilometres will dissipate right at that moment you stand in front of En Cave, amazed by the primitive scenery formed about 500 million years ago. 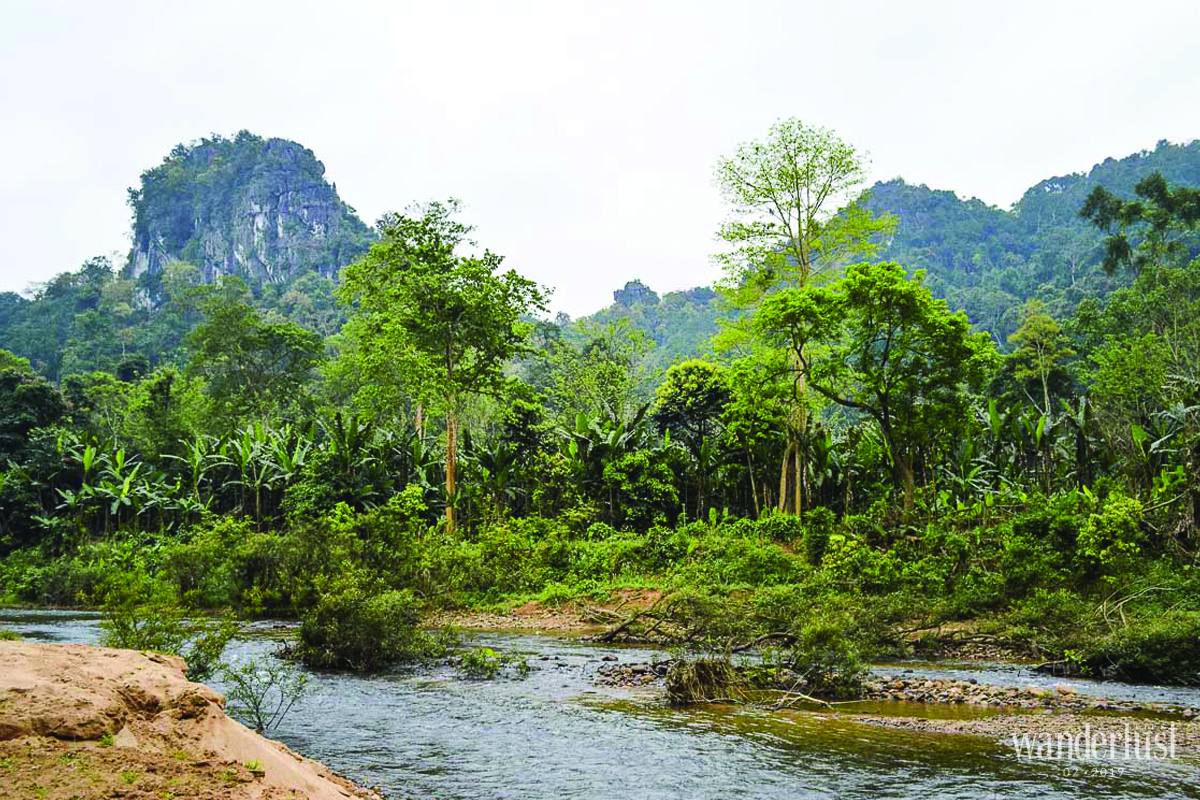 Nowhere else have I felt such a strong sense of Mother Nature as the time I spent in En Cave. En Cave is such an enormous and safe shelter Mother Nature has created for human beings, filled with water, air and light. En Cave has 3 main openings, the first opening has 2 domes: the outer dome leads into a gigantic cavernous chamber, while the shorter inner dome is next to a large and waist-deep subterranean river in the cave. The second entrance leads to a massive chamber connected to the outside world, it is a vast space with the appearance of a huge oculus. The third 100-metre-high opening at the back of En Cave is where the river flows out of the cave and runs to Son Doong Cave.

In order to go deeper into the cave from the first entrance, we had to wade across the river and climb on the jagged cliffs which are tens of metres high. Looking from the top of the cliffs, the bottom of the cave is far-off and surrounded by a wide river. Clinging to the rock, we descended to the foot of the cliffs and then rowed rafts across the river to reach the centre of the cave. The largest part of En Cave has a colossal width of approximately 170 metres, which can hold hundreds of people. The ceiling is as exquisite as the dome of a cathedral and at its tallest point, the cavernous chamber could accommodate a 40-storey skyscraper (about 120 metres). 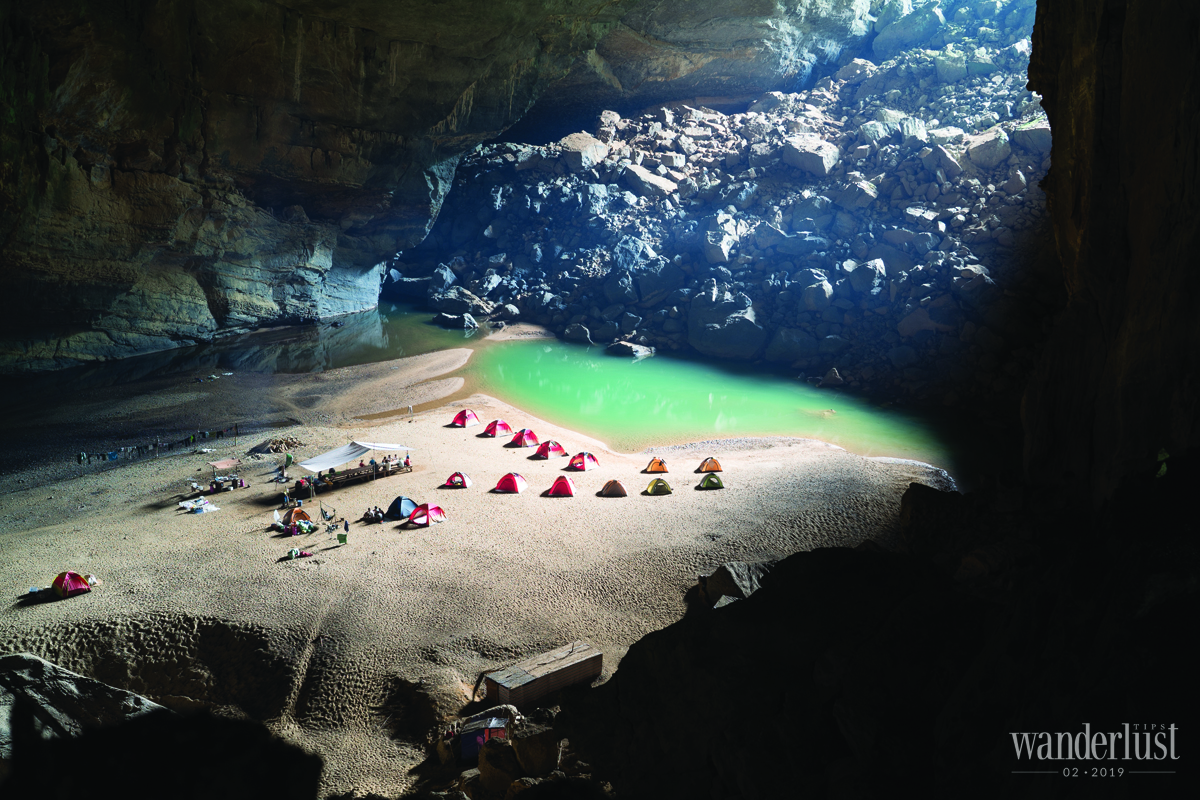 Thousands of swallows call this cave home and they seem not to be afraid of humans. When we were having dinner a swallow fell down onto our dining table, the bird had injured its wing and was unable to fly so one member of our team rushed to hold and feed it in his hands. The next morning, I saw it casually walking around our tent and hoped it would soon recover and once again be flying in the clear blue sky. Along the path, I saw many baby swallows sleeping on rocks, they were so bold that they would even try to snuggle up in your hair and climb right up on your head to sleep!

Venturing into the back of En Cave, I felt as if I had been transported back several hundred million years. I saw the “traces of time” presenting themselves in the fossils of the cliffs, the stalactites and stalagmites on the cave walls. The British cave expert Howard Limbert, who has found more than 500 caves in Vietnam including the world’s largest cave Son Doong, confirmed that every centimetre of the stalactites has been forming for hundreds of millions of years. It seems like all stalagmites and stalactites are still alive in the journey of the creation of nature. Only one human touch and the process of formation can end immediately as the oil on the human skin will cause the water to slip away and no longer build up. With this in mind, each of us carefully walked on the small path to not affect any of these priceless monuments of time. In the back of the cave, there are many layers of winding coral reefs which look like gorgeous water terraces with each step filled up with sparkling water. 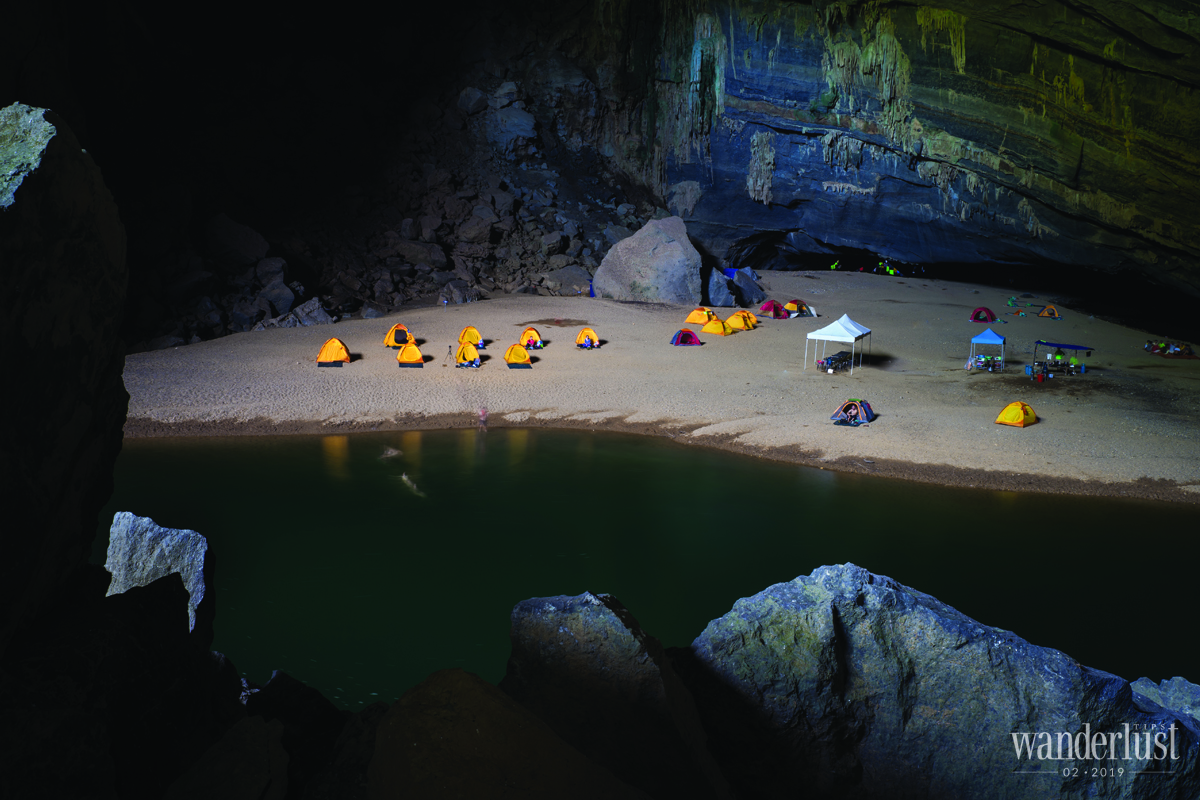 A NIGHT IN PREHISTORY

In the afternoon, visitors can swim in the underground river at the centre of the cave. The sandy shore gradually descends into a bottom that is full of smooth gravel and stone, while the water is so cool and clear that we can see its bottom, the river is like a natural beach. Due to the difference in temperature, half of the river is warmer while the other half is colder. When soaking in the water, hearing laughter echoing off the cliffs, looking at bright spots flickering in the dark of the cave, I felt like I was transported back into a primitive time.

The night spent in En Cave was the most memorable experience of this trip. When darkness enveloped the cave, we could still see the light from the second entrance and flocks of birds flying back into and circling inside the cave. This is the home of thousands of swallows and it is said that in ancient times, the Arem people who inhabited the cave used baby birds and birds eggs as a source of food. Even though they have now left the cave, the ritual of “eating swallows” has been kept alive. They have never exploited all of the forest’s resources, always being mindful to preserve and nourish what it has to offer, for example, when harvesting wild honey, leaving a part of the nest for the bees to continue to live in. It is also said that the Arem still have relatively flat feet which is a remnant of many generations climbing the high cliffs. 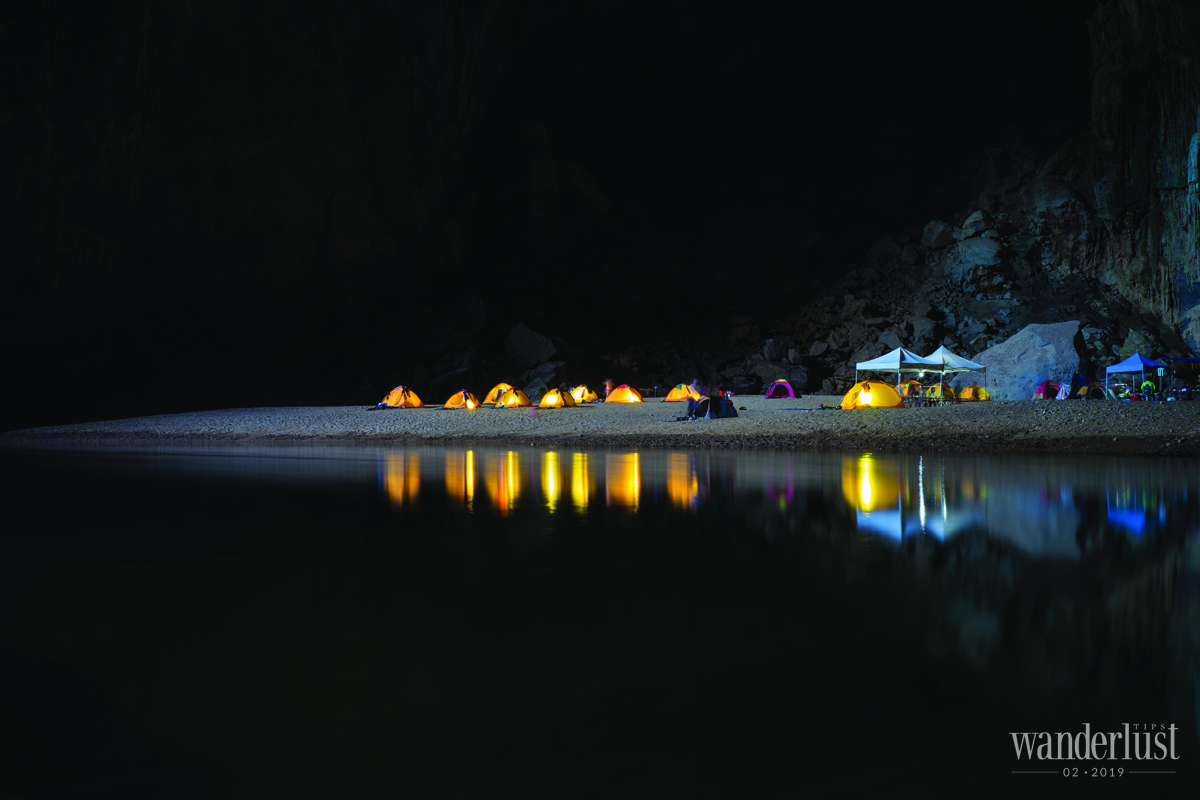 Even though we knew we had to keep up our strength for the next day to climb the cliffs and wade through the underground river, every one of us in our group felt such a sense of regret to fall asleep that wonderful night. We, 16 people from different countries, sat on the sand while the sparkling river flowed in front of us, the cave ceiling and dark sky above our heads as we were surrounded by the singing of the birds.

After taking a nap, I suddenly woke up in the middle of the night, still hearing the songs of the birds, the splash of water and the sounds of droppings landing on the roof of the tent. The sun rose over the land at 5am, the light was shining down into the cave from the sky harmonizing with the vapour creating a dreamy scenery. Everyone leaned out of their tents, ran barefoot along the riverbank and then sat on the edge of the water washing their faces, breathing in the cool fresh air. Everyone’s face looked so fresh and radiant, they were all excited for the final journey exploring the mysterious world in En Cave. 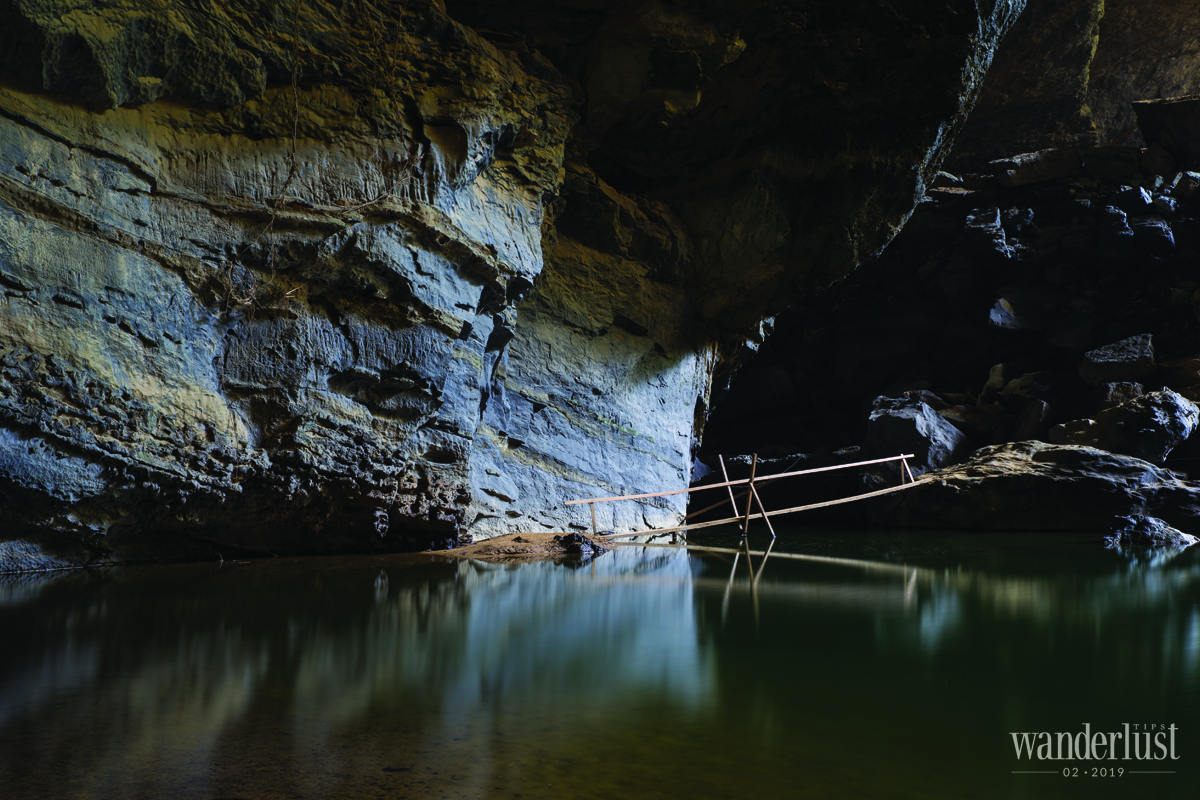 The pristine beauty and the preservation of the vestiges of prehistoric times is the highlight of En Cave in particular and of the Phong Nha – Ke Bang National Park in general. Every step of our journey to En Cave was a precious experience to discover the dawn of the earth and humanity. I hope its invaluable beauty will never be destroyed by human greed and short-sightedness.

Currently, Oxalis is the only travel company allowed by Quang Binh province to organize tours to explore En Cave. A tour lasts 2 days and 1 night for the price of VND7,600,000 per person, however, the cost can be reduced if there is a promotion. There are 1 to 2 trips per week of up to 16 guests per trip. You should register at least 1 month in advance.

REQUIREMENTS TO TAKE PART IN THE TOUR

Tourists need to have the physical ability to complete the trek and have trekking experience. This includes being capable of climbing a slope which is as high as a 42-story building, walking 22 kilometres of forest path, wading through 30 streams and a 4-kilometre underground river in the cave.

En Cave discovery tours operate from late December until the end of August (tours do not operate from September to December). The best time to visit is in March and April. If you go before this time, the weather will be a little colder, while travelling later it will be quite hot. In particular, late spring is the time when visitors can best witness the butterflies and green trees.

Because you will have to walk a lot, shoes are the most important items. Oxalis does offer shoes to borrow but it is recommended that you should buy your own in advance. You should buy wading shoes with drainage holes in a larger size because after a day climbing and soaking in water, your feet may swell slightly. In addition, you should wear long sleeve shirts, turtleneck clothing, waterproof trousers, knee-high socks and leggings. You should also bring sunscreen, mosquito repellent, citronella oil or lemon essential oil. It is recommended that you take a lightweight backpack for carrying water, umbrellas and jackets. Other items such as helmets, gloves, flashlights, camping tents and meals are provided by the travel company. 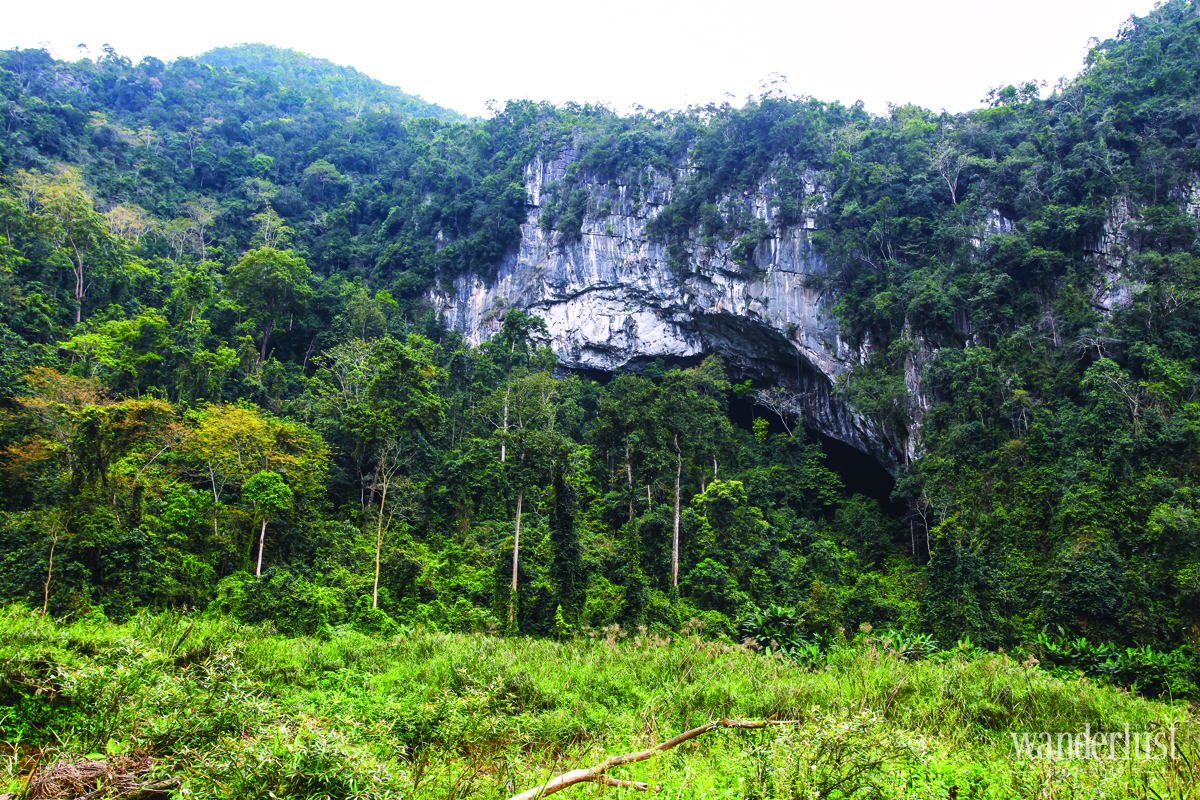 From other provinces to Quang Binh, you can travel by aeroplane, train or bus. The most convenient transportation is still a night bus, it departs in the evening and in the early morning of the following day you will arrive in Dong Hoi city (Quang Binh province), then move to Phong Nha – Ke Bang National Park and begin trekking at 9.10am to En Cave.