Malaysia’s capital offers a dining experience as eclectic as its skyline, but everyone knows the tastiest side dish is a cheap bill. From humble street stalls to value-for-money restaurants, here are the best places to fill up in Kuala Lumpur that’ll cost you less than a taxi ride across town.

A SLICE OF SARAWAK IN BANGSAR

If you set out to find the epitome of a neighbourhood eatery in Bangsar, the Sarawak laksa stall inside the Nam Chuan Coffee Shop food court is your best bet. The laksa (RM8) here is built for rainy days: a heap of chewy rice vermicelli arrives in a spicy, coconut milk-based soup that is crowned with shredded chicken, huge prawns, ribbons of sliced omelette and lashings of chopped coriander. Owner Christina Jong has been doling out bowls of comfort for more than 16 years – her version of Sarawak laksa doesn’t get any more authentic than this.

VEGAN MIXED RICE IN A TEMPLE

A heads up: don’t come here expecting a leisurely meal or doting servers. The neighbouring office crowd flocks to this budget-friendly canteen located at the back of Dharma Realm Guan Yin Sagely Monastery for one of the best vegan meals in the city. The mixed rice buffet (from RM5) displays more than 50 dishes, including vegan mock-meat items. Come on a Friday for lei cha (which literally translates to ‘thunder tea’), a Hakka rice speciality served with an assortment of chopped vegetables and accompanied by a ‘pounded’ tea drink.

NASI DAGANG IN A MALAY SETTLEMENT 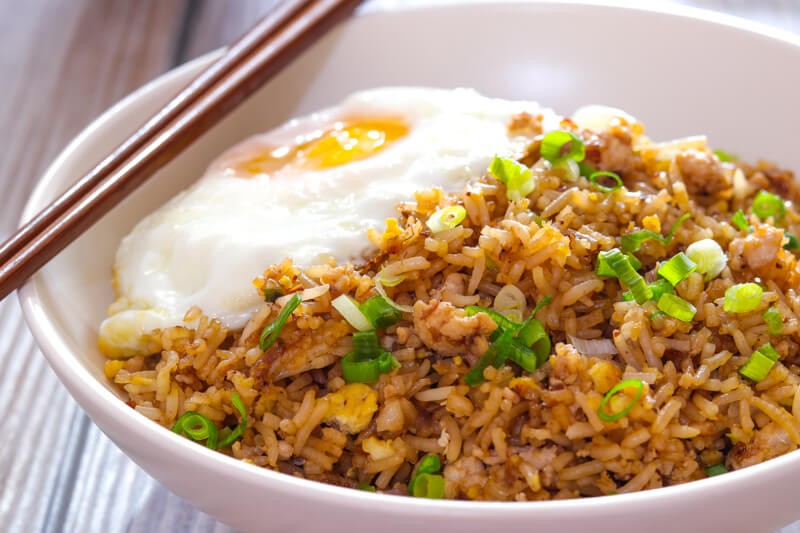 The unpretentious Chunburi Seafood (7 Jln Raja Muda Musa) restaurant in Kampung Baru – one of the last Malay villages in the heart of the city – is famed for its Kelantanese nasi dagang (nutty rice cooked in coconut milk, from RM6), which is traditionally eaten as breakfast on the east coast of Malaysia. Diners pair the rice with a variety of fish dishes, especially the gulai ikan tongkol – a tuna curry that woos you with a rich depth of flavour. Chunburi is consistently crowded during lunchtime; grab a mango and coconut rice dessert from the sweets stand while you wait.

PISANG GORENG FOR A MIDDAY SNACK

The best way to treat a king banana? Fry it to a golden crisp. Stall owner Uncle Chiam has been catering to a steady stream of office workers, students and construction workers every day for the past 34 years. Sourced all the way from a farm in Pahang, the bananas (RM1.40 per piece) are deep-fried in a heavy batter, giving them a satisfying crunch while maintaining a caramelised interior within. Round out your pisang goreng snack with some fried kuih bakul (rice cakes).

BEEF NOODLES WITH A SIDE OF NOSTALGIA AT SOONG KEE

The battered restaurant signage and tinted windows make this old-timer at Masjid Jamek feel like a true find. Beef noodles are aplenty in KL but it’s the noodles, and sometimes soup, that help define each particular style of this local staple. Go for the dry version (RM7) at Restoran Soong Kee (facebook.com/SoongKeeBeefNoodle): springy egg noodles coated in dark soy sauce are topped with minced meat, and served with your choice of beef balls, sliced beef, cow’s stomach or tendon in a light-tasting broth. 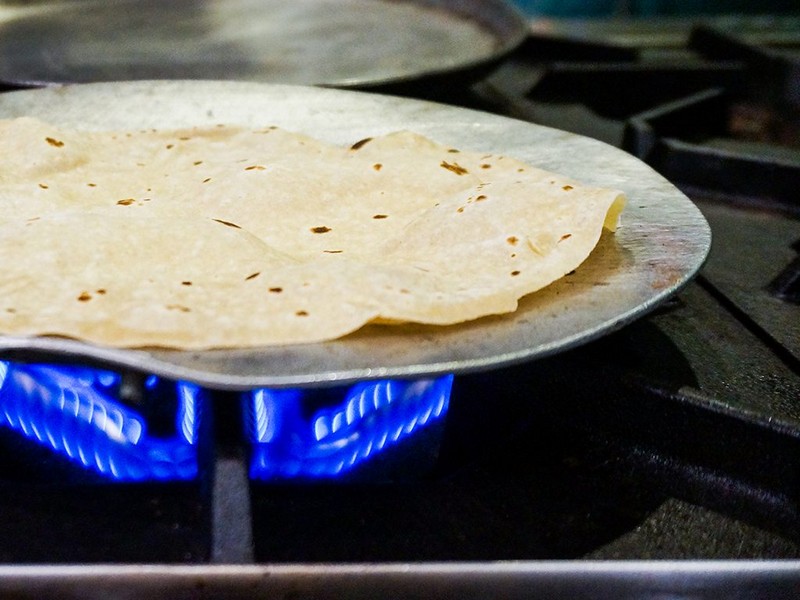 For cheap and cheerful refuelling, nothing beats a fluffy chapati at just RM1.80 each. Sure, you’ll find a much cheaper version of the unleavened flatbread elsewhere but the price at Authentic Chapati Hut (3 Lorong Padang Belia, Brickfields) is justifiable – the chapatis, cooked fresh on the griddle, are moderately chewy with perfectly browned crispy spots. They’re basically blank canvases to mop up curries or the restaurant’s signature chana masala (chickpea curry). Save some space for their pillowy naan bread too.

You can still score a decent bowl of pork noodles in the city even when you’re strapped for cash. Machi Pork Noodle (33 Jln 34/154, Taman Bukit Anggerik) outshines its contenders by cranking out a heady, cloudy pork broth that comforts you like a big warm hug. The noodles (RM6), cradling a poached egg in the centre (ask the waiter for it), are fortified with the addition of minced pork, pork balls, various pieces of pork offal, pork slices, fried lard and a flurry of chopped spring onion. Fortune favours the bold – break the yolk and stir through for a silkier and thicker soup. 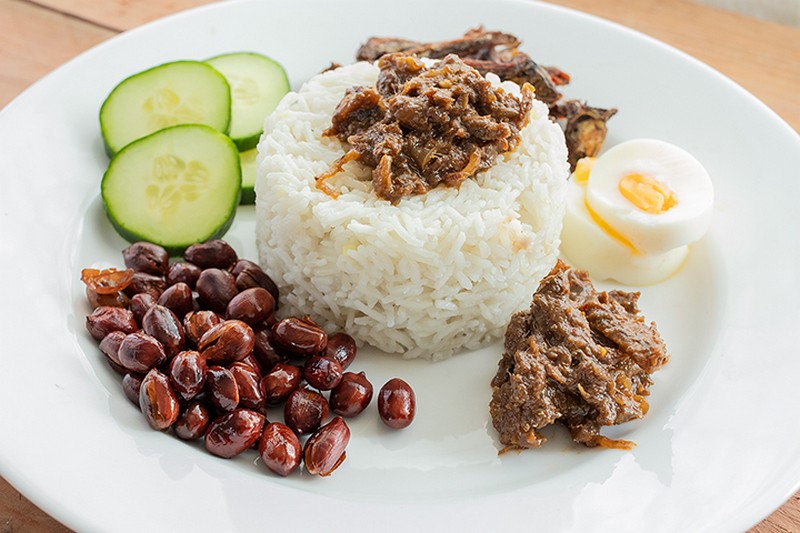 A nasi lemak without the requisite fried anchovies and hard-boiled egg sounds almost blasphemous, but the vegetarian version (RM2.50) at Annapuurnam Chetinad Restaurant (74 Lorong Maarof, Bangsar) will prove you wrong. A warm, nutty fragrance permeates the air as you unpack the wrapping of the dish to reveal a mound of hot fluffy rice cooked in coconut milk, with peanuts, sliced cucumbers, a piece of mock meat, and a spicy sauce that packs flavour and heat in equal parts. A masala chai (spiced milk tea) seems like a sweet ending to a meal – until you spy the jars of murukku (crunchy Indian snacks) at the cashier.

HAVE ROJAK NEXT TO THE PURU WET MARKET

For the uninitiated, walking through the sprawling labyrinth of the Pudu wet market can be overwhelming. But those who brave the crowd will be rewarded with Sulaiman’s rojak pasembur (from RM5), a concoction of prawn fritters, deep-fried bean curd, hard-boiled egg, yam bean and shredded cucumber – all doused in a thick nutty sauce. Don’t leave without ordering a bowl of cendol, a cooling shaved ice heaped with strands of green rice ‘noodles’, coconut milk, sweet corn, Adzuki red beans and a caramel-like gula Melaka. Find the restaurant in front of MSS Maju Restaurant, off Jln Pudu.

Devi’s Corner stands out in a crowded field of banana leaf rice spots in KL for one reason: its mango chutney. Only available on Friday and Sunday, the sweet and tangy relish is reason enough alone to put up with Bangsar’s snarly traffic. The banana leaf rice (from RM7.50) action takes place on the upper floor of the restaurant, where you’ll find diners knuckle-deep in a heap of rice, raita, crab curry and crunchy pappadam. Make sure you clear your schedule afterwards – a nap is almost inevitable.