I have always thought that the infamous lantern festival held annually in November was the only reason that my friends had fallen in love with Chiang Mai. Only when I actually arrived in this city, dubbed the “northern rose of Thailand”, did I realise that I was completely wrong. Chiang Mai does not boast the bustling atmosphere with dynamic shopping and entertainment centres, instead Chiang Mai offers spectacular natural surroundings and a peaceful way of life. I certainly fell in love with its exquisite beauty. Sometimes, the simplest things in the daily life leave us feeling mesmerised. 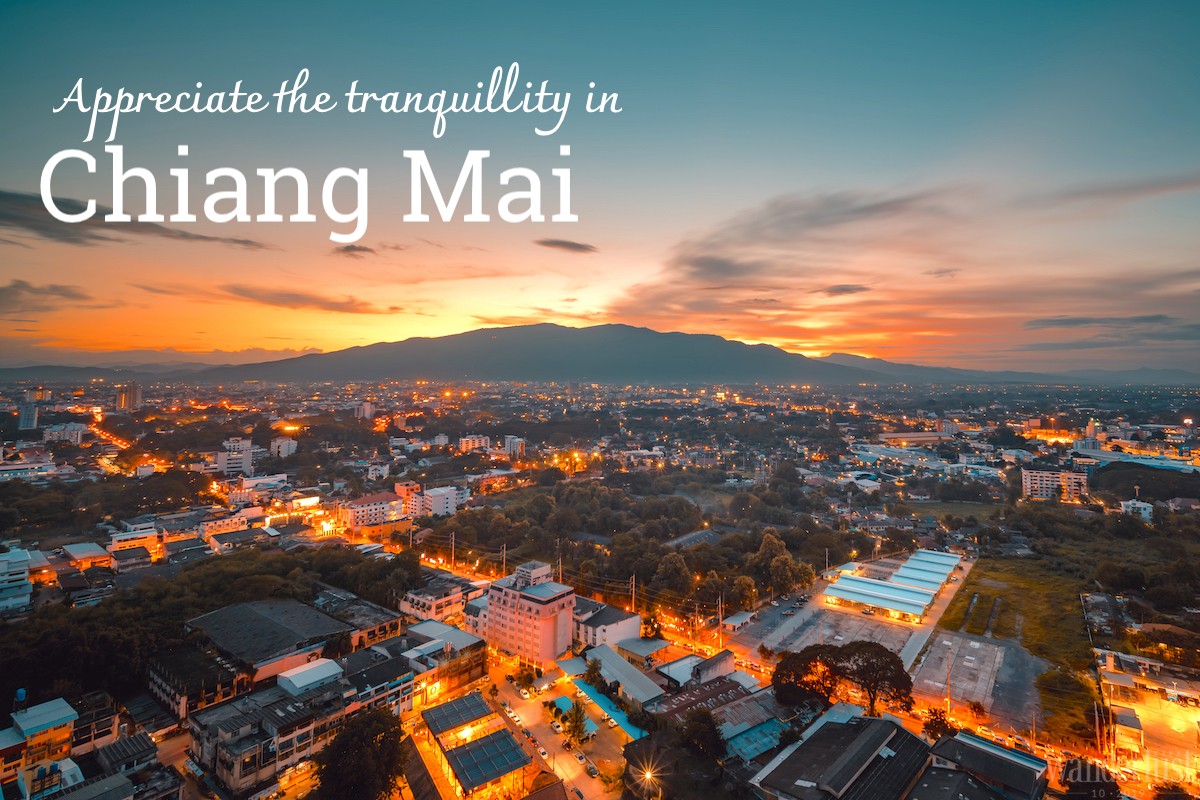 A PEACEFUL STROLL AROUND THE STREETS IN CHIANG MAI

After two days in vibrant Bangkok, I moved to Chiang Mai early in the morning. As the plane was coming into land, the panoramic view of the serene city appeared before my eyes. The weather was very cool and pleasant on that day. The Tuk Tuk drove me through the tree-lined streets. An amazing variety of quaint shops was built side by side with modern buildings. Taking a stroll around the city and you can easily encounter a whole host of anciently sacred temples. The more I discovered, the more I was surprised by how deserted Chiang Mai was. Definitely it was not the thing what I imagined of a famous tourist destination in Thailand.

A far cry from the bustling Bangkok where traffic is chock-a-block with cars, the streets in Chiang Mai are quiet and sparse. Most of the beautiful houses only have three or four storeys, the vast rice fields dotted with wires and the peaceful Mae Ping River reflected the vast blue sky. During the daytime, the pace of life in Chiang Mai played out almost in slow motion, gently passing me by. When the brilliant orange sunset spread across the horizon and the streets lit up, Chiang Mai put on a different show that was a little more hectic than the daytime. 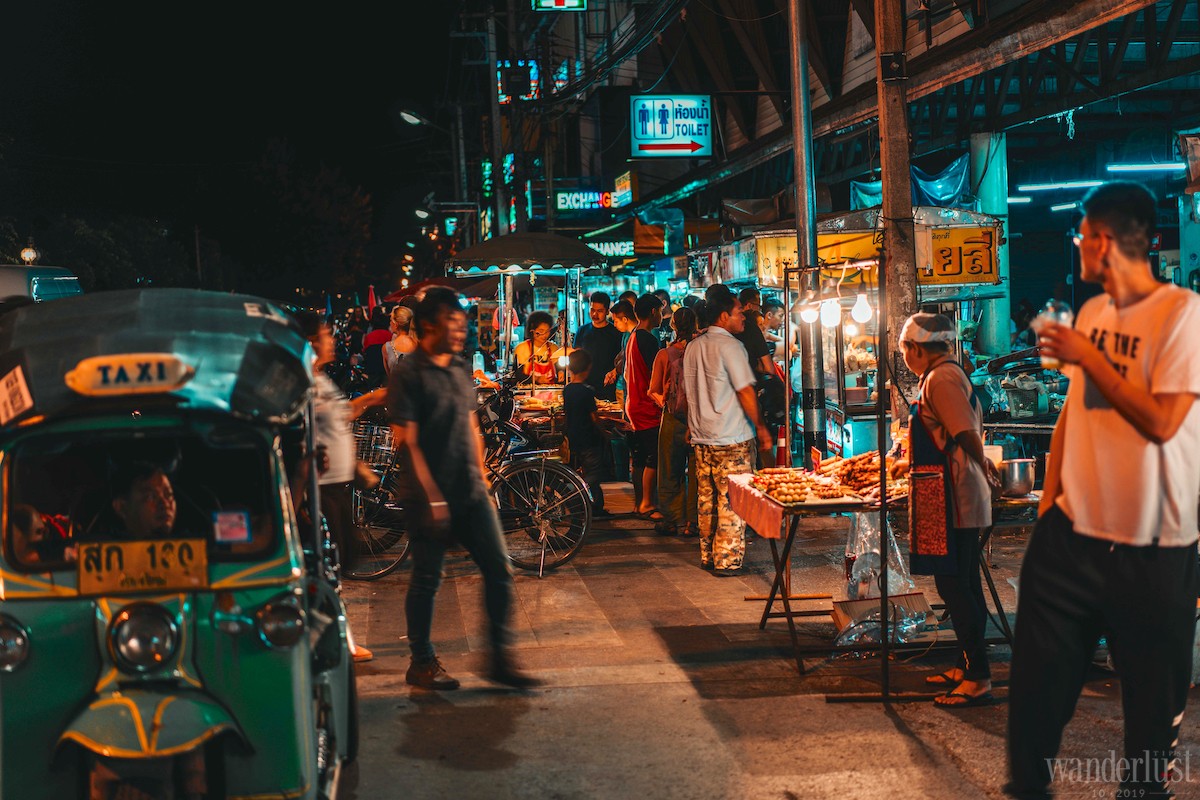 My friends and I decided to visit the walking street where we both shopped for trinkets and souvenirs whilst immersing ourselves in the buzzing nightlife of this beautiful city. Chiang Mai night market boasts a hectic ambience with an amazing variety of stalls and items, for instance, souvenirs, clothes, shoes and especially street food draws the tourist’s attention. Wandering from stall to stall made us lose track of time.

Just as I was looking to buy some more colourful T-shirts and try some delicious snacks, my friend reminded me that it was 10 pm and it was the time to return to the hotel. The Tuk Tuk took us away from the market and only a short distance away the houses had closed their doors and turned out their lights. We headed back to the hotel for a rest so that we could wake up early the following morning. At sunrise, I was sure that Chiang Mai would welcome us with more interesting things on the roads we had just passed through.

AN ADVENTURE TO THE PEACEFUL LAND 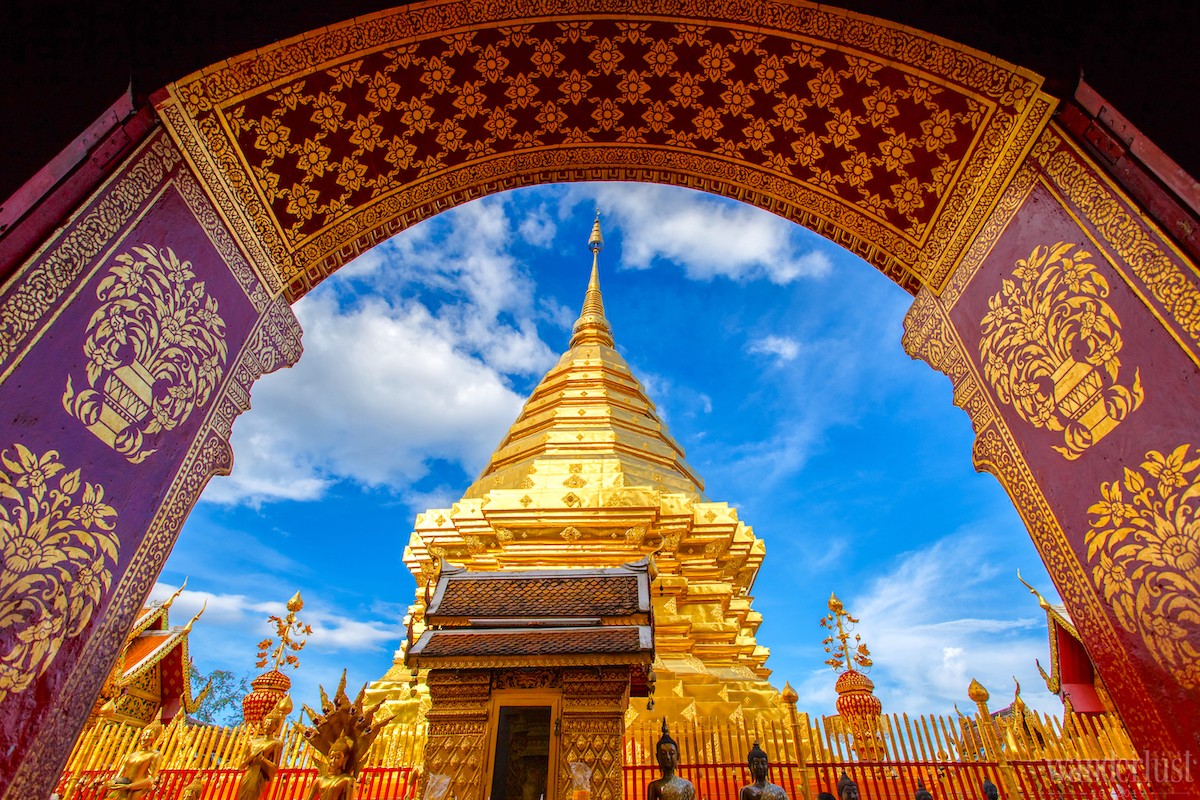 When travelling to Chiang Mai, be sure to visit the temples imbued with ancient cultural values. We began our adventure by visiting Wat Phrathat Doi Suthep or Doi Suthep – one of the most sacred temples in Thailand. The temple was constructed in 1383 on the summit of Doi Suthep Mountain and towered 1,676 metres above sea level. Standing on Doi Suthep Temple, visitors have a great vantage point and can admire a breathtaking panoramic view of Chiang Mai city spanning out under the bright sunlight.

Legend has it that Doi Suthep temple was constructed by King Nu Naone of the Old Lanna Kingdom with the aim of enshrining Buddha’s relics. Upon arriving at this sacred temple for the first time, I was completely overwhelmed by the monumental architecture and the exquisitely golden structures. Most prominently, the largest gleaming golden Chedi located in the central area is a real masterpiece standing out against in the bright sunlight. Visitors here are truly amazed and mesmerised by its impressive design. Additionally, the golden statues in an amazing variety of sizes and colours are placed all around the temple, making visitors feel that the Chedi stupa is being guarded carefully. The beautiful bells produce an enchanting and relaxing melody allowing visitors to indulge in a tranquil atmosphere. 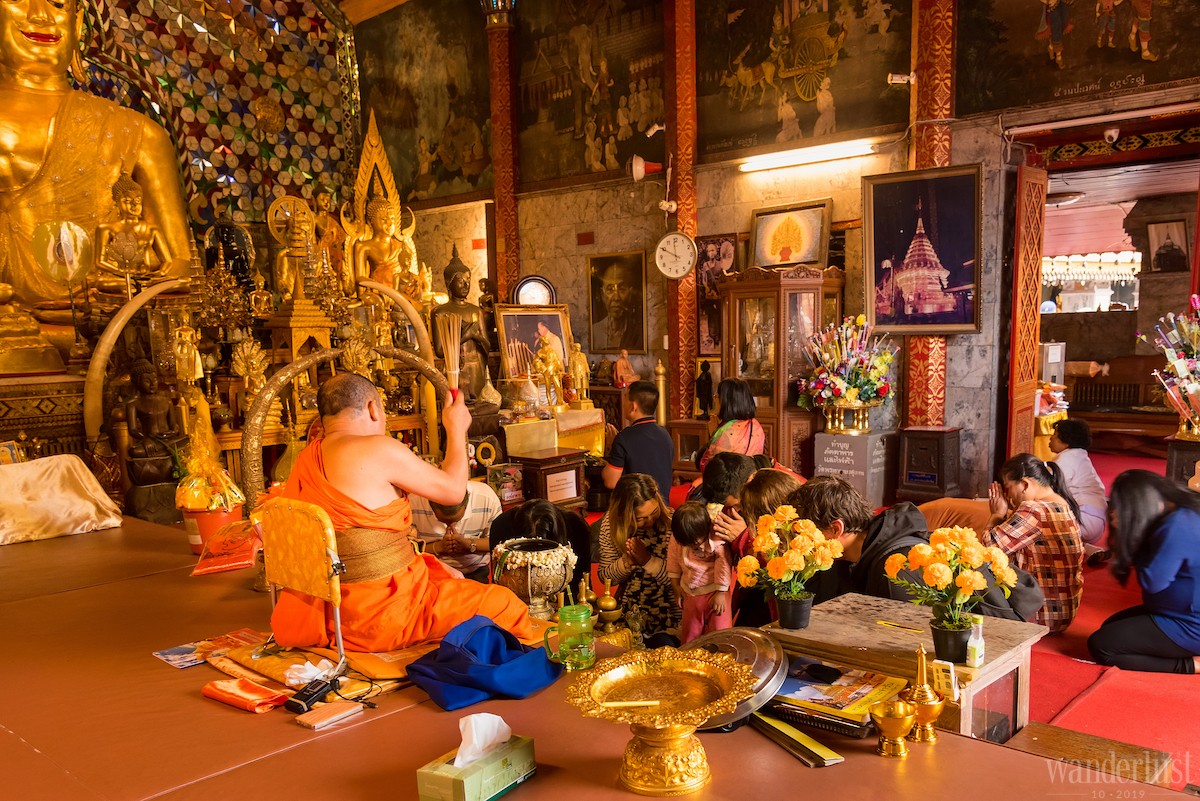 Taking a wander through the zigzagging roads to the bottom of the city, I visited Wat Umong temple. We meandered along the tree-lined path to the temple gate, the peaceful and serene space seemingly took us back in time. A far cry from the sparkling Doi Suthep, Wat Umong located at the bottom of well-known Suthep mountain boasts an idyllic and ancient beauty. The 700-year-old temple is considered one of the oldest temples in Thailand.

Wat Umong is imbued with ancient imprints hidden in the crumbling façade and green moss of each stone wall. I took a stroll around the ancient brick tunnels leading the way to the temple’s main hall. The deeper I went inside, the quieter it became. The space here is shrouded by a faint smell of smoke and there are statues hidden in the stone walls. Without the tour guides’ guidance, it might take a long time to find the exit. One of the most prominent places at Wat Umong is the stupa at the top of the mound. 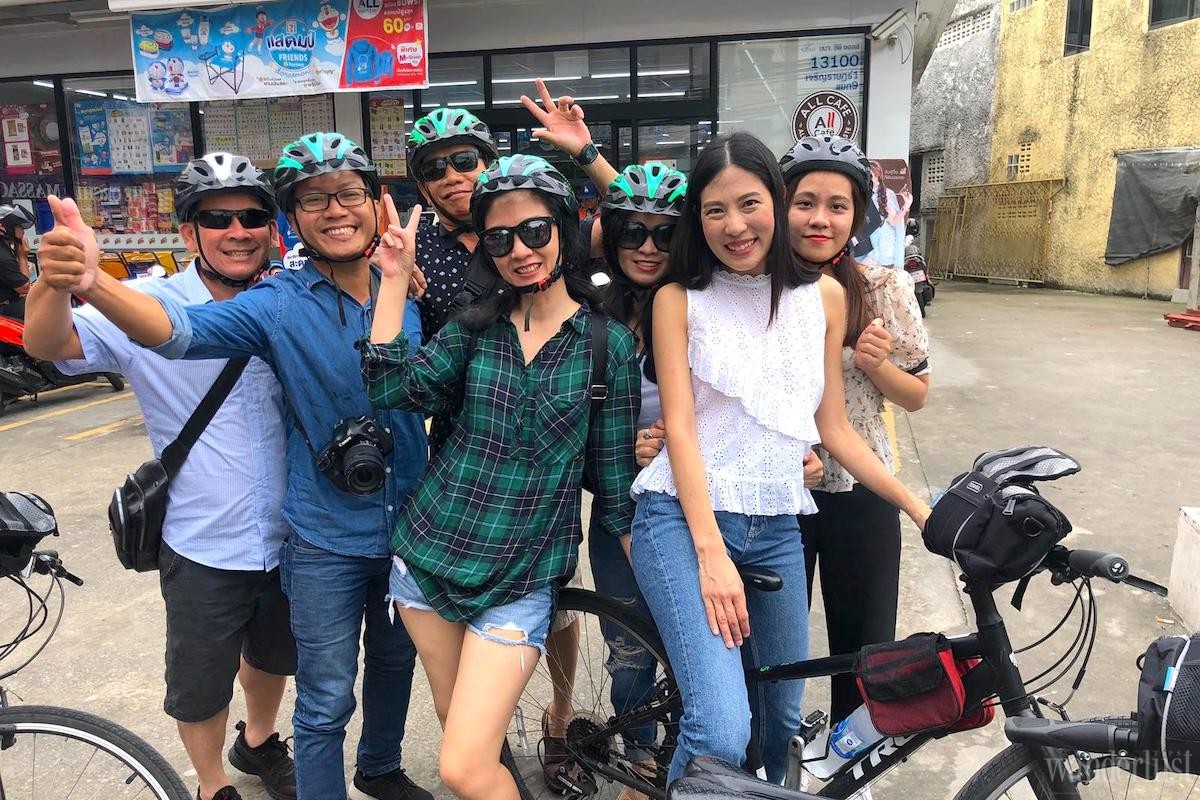 The stupa is home to many precious statues in an array of amazing shapes. They were designed skillfully and deftly due to the cultural and religious beliefs of the Thai people. More interestingly, I had the opportunity to hear many historic stories about the establishment as well as the thriving development of Buddhism in Thailand. There are many other sacred and beautiful temples in Chiang Mai that I have not yet had the chance to visit. I will definitely come back not only to discover more of the stunning landscapes but simply to fall further in love with the peaceful and charming land. I waved goodbye to Chiang Mai but I hope to return one day.

From Hanoi and Ho Chi Minh City, you can take a direct flight to Chiang Mai. Alternatively, you can visit Bangkok first because it is easy to travel to Chiang Mai from Bangkok. You can opt for Bangkok Airways with a wide selection of flexible flights. In Chiang Mai, you can opt to travel by taxi, motorbike, bicycle or Tuk Tuk.

Chiang Mai is an ideal tourist destination because the climate is cool and pleasant, suitable for visitors to have an exhilarating adventure.

The official currency in Thailand is Baht, symbolised by THB. THB1 = VND752,69. You can exchange money at the airport or major shopping centres in Thailand. However, you should exchange money before travelling to Thailand to save time.

In addition to the traditional culinary delicacies, Thai cuisine in the Northern provinces is blended with the rich flavours of spices and the distinctive tastes of neighboring countries such as Laos, China or Myanmar. In Chiang Mai, you should try some delectable delicacies including Khao Soi, Sai Qua, grilled chicken and Khanom Jeen Nam Ngeow.