You have a morning to explore Phu Yen, where you should go and what to do to have enjoyable experiences? Here are the detailed suggestions from Wanderlust Tips for you to have a perfect journey in Phu Yen.

1. THE CLIFF OF STONE PLATES

Located in An Ninh Dong Commune, Tuy An District, the Cliff of Stone Plates look like a huge honeycomb from a distance. It is a sparkling mysterious black light amidst a clear blue sky. Tens of thousands of hexagonal, square, or circular rock pillars are layered on top of each other, seamlessly aligned, and look as though they have been arranged by the human hand. Along with the time and waves from the sea, the rock pillars here are not separated or broken, but cling to each other, one layer after another, stretched to the sea. 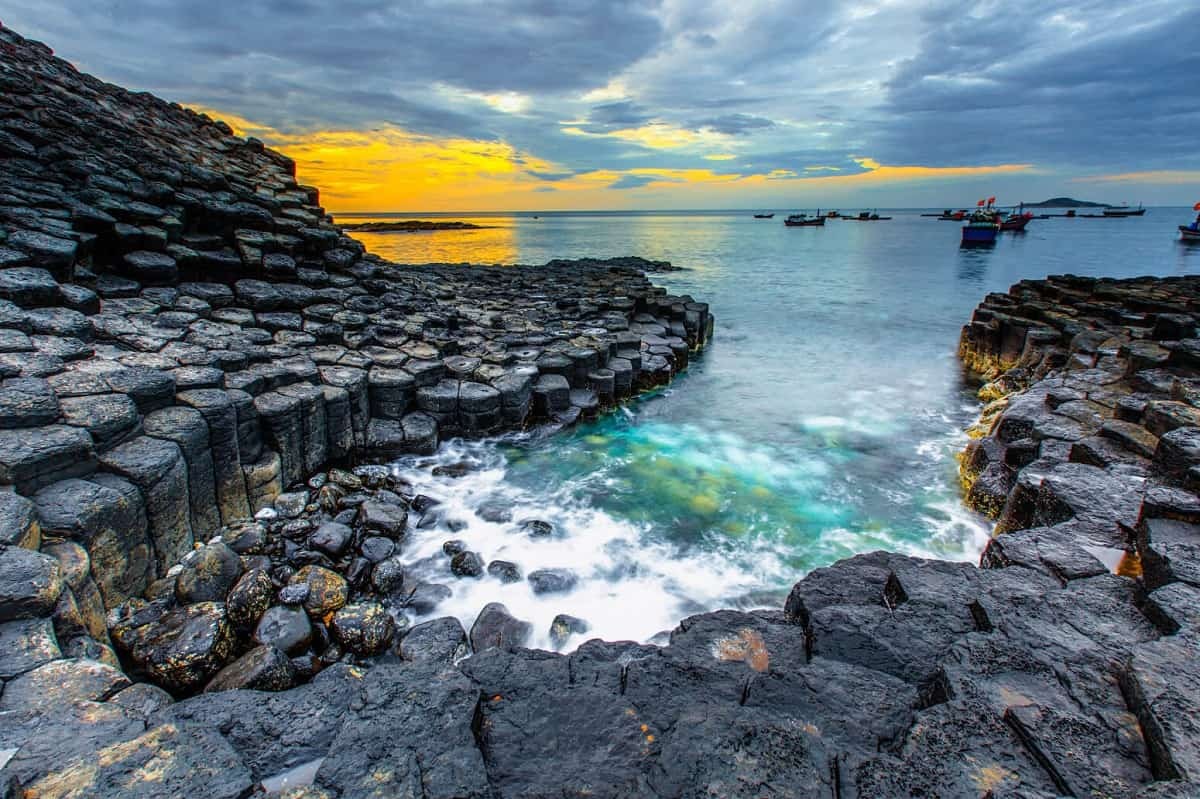 ♦ Top tips: From Tuy Hoa City, head along National Highway 1A to the North about 30 kilometres, then enter Chi Thanh Town (Tuy An District). Turn right (heading East) about 12 kilometres, until you see the Cliff of Stone Plates. 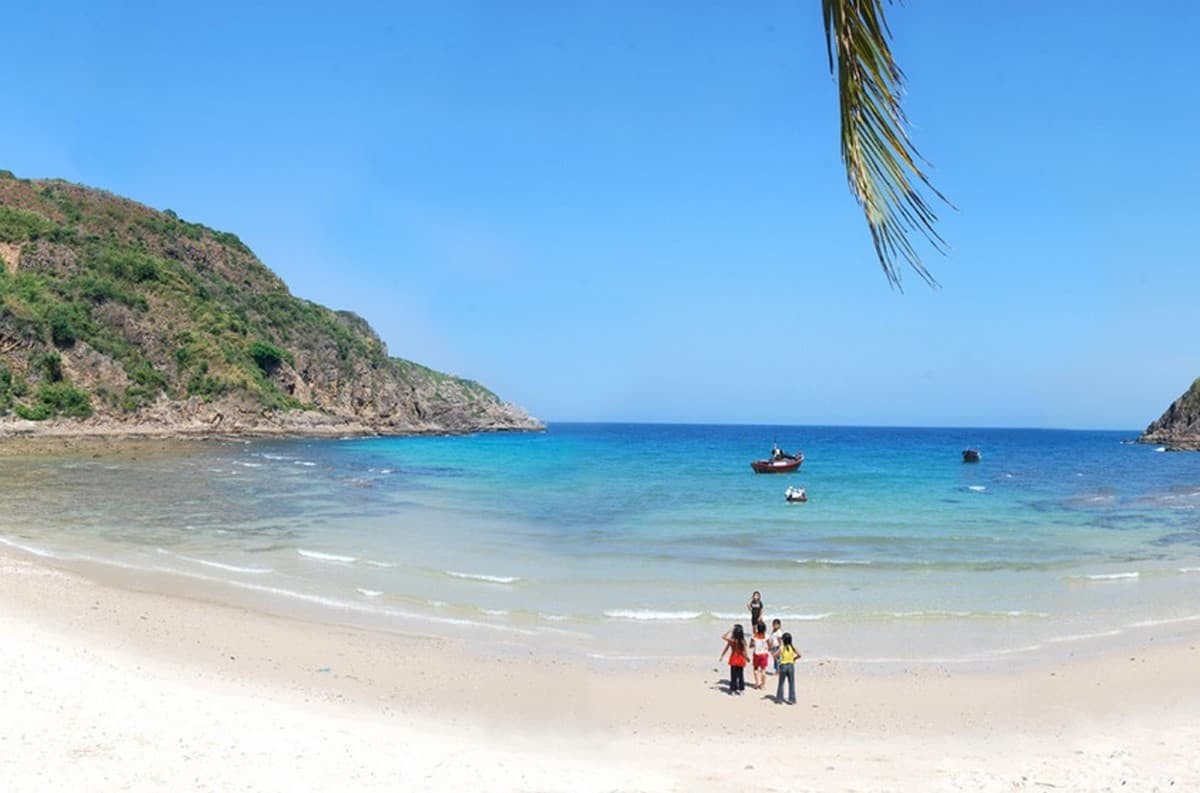 ♦Top tips: The unique features of Xuan Dai Bay are white sandy beaches, smooth waves, ideal for vacation, swimming. If tourists want to explore the life of local people, they can go to the fishing village in the Bay.

O Loan Lagoon is located at the foot of Quan Cau Pass, in Tuy An District, Phu Yen Province, about 22 kilometres to the North of Tuy Hoa City. With an area of more than 1,500 hectares, O Loan Lagoon offers tranquil natural beauty with airy space, and fresh, cool climate. From the top of Quan Cau Pass, visitors will see Tu Bi Mountain (the mountain of compassion), where Tu Bi Stream flows through the canyons and pours into the lagoon, creating a romantic scene. Surrounding the Lagoon is Dong Chay Mountain, Cam Mountain and An Hai Dune, with rocky reefs protruding out of the Lagoon forming cliffs of various shapes. Lying along the water edge are casuarina forests and shelters of birds such as mallards, pelicans, storks, and ducks. 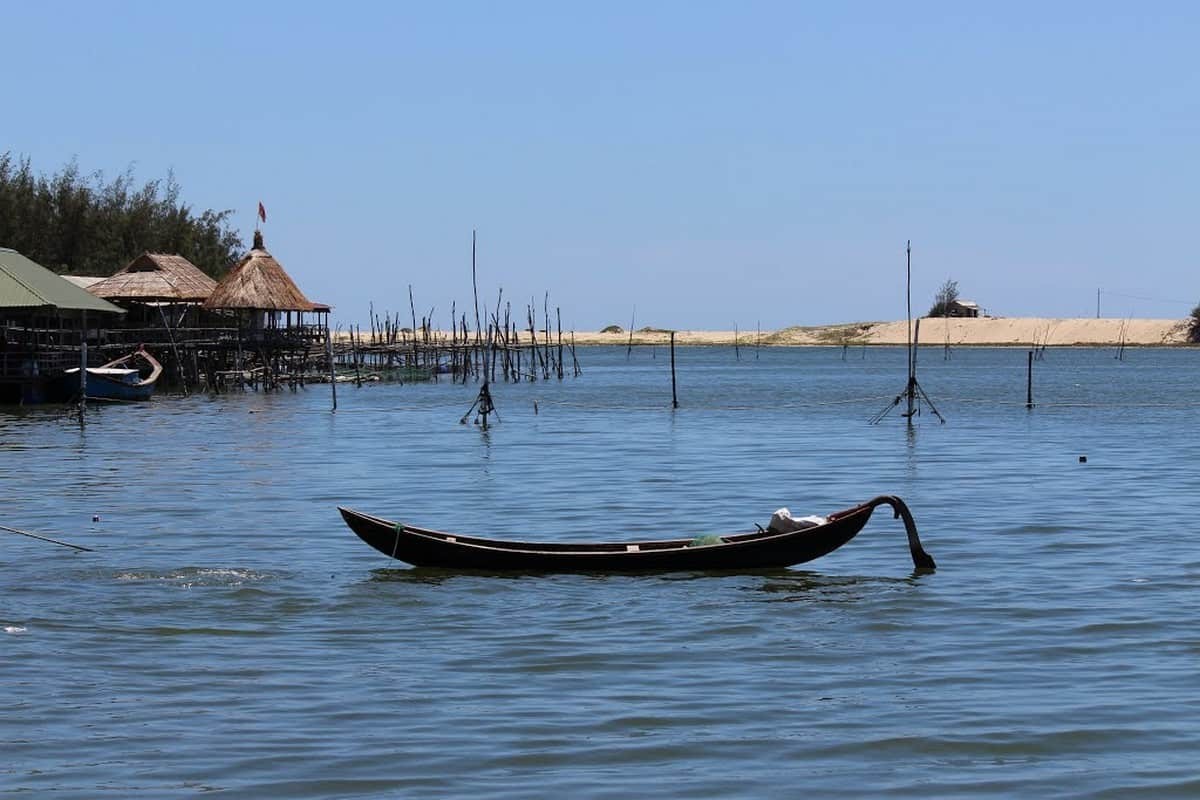 ♦ Top tips: Visitors to O Loan Lagoon can enjoy the beautiful natural scenery and countless fresh seafood dishes, which are prepared according to the typical flavour of Central Vietnam.

Dai Lanh Cape is located in Dong Be Hamlet, Hoa Tam Commune, Dong Hoa District, Phu Yen Province, about 35 kilometres to the Southeast of Tuy Hoa City. This is site combines many beautiful scenes, with forests, sea, streams and mountains. Local people also call it Dien Cape, because the top has a lighthouse that shines nightly to help boats pass from the sea into Vung Ro Bay. At the foot of Dai Lanh Cape is the pristine moon-shaped beach of Bai Mon, with a coastline of about 400 metres, smooth slope, fine white sand, crystal clear water. 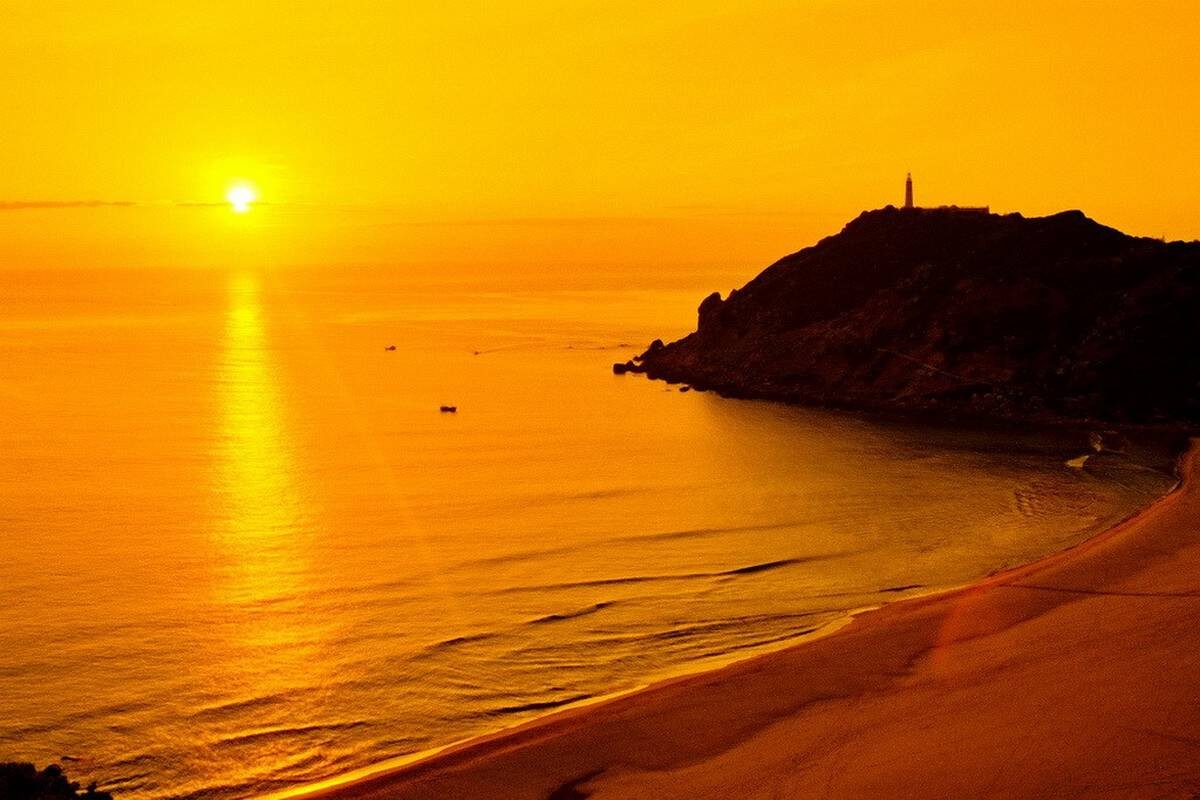 ♦ Top tips: This is a beautiful sunrise viewpoint. In addition, visitors coming here will have the opportunity to participate in a game on the sea with fishermen, or to hunt eel – the fish known as “Jiaolong of the ocean”.

♦ Must see: Bai Goc Beach and Bai Tien Beach on the way from Tuy Hoa City to Dai Lanh Cape.

♦ Cuisine: Going to Vung Ro Bay about 6 kilometres away, is where there are many restaurants with fresh and attractive seafood. 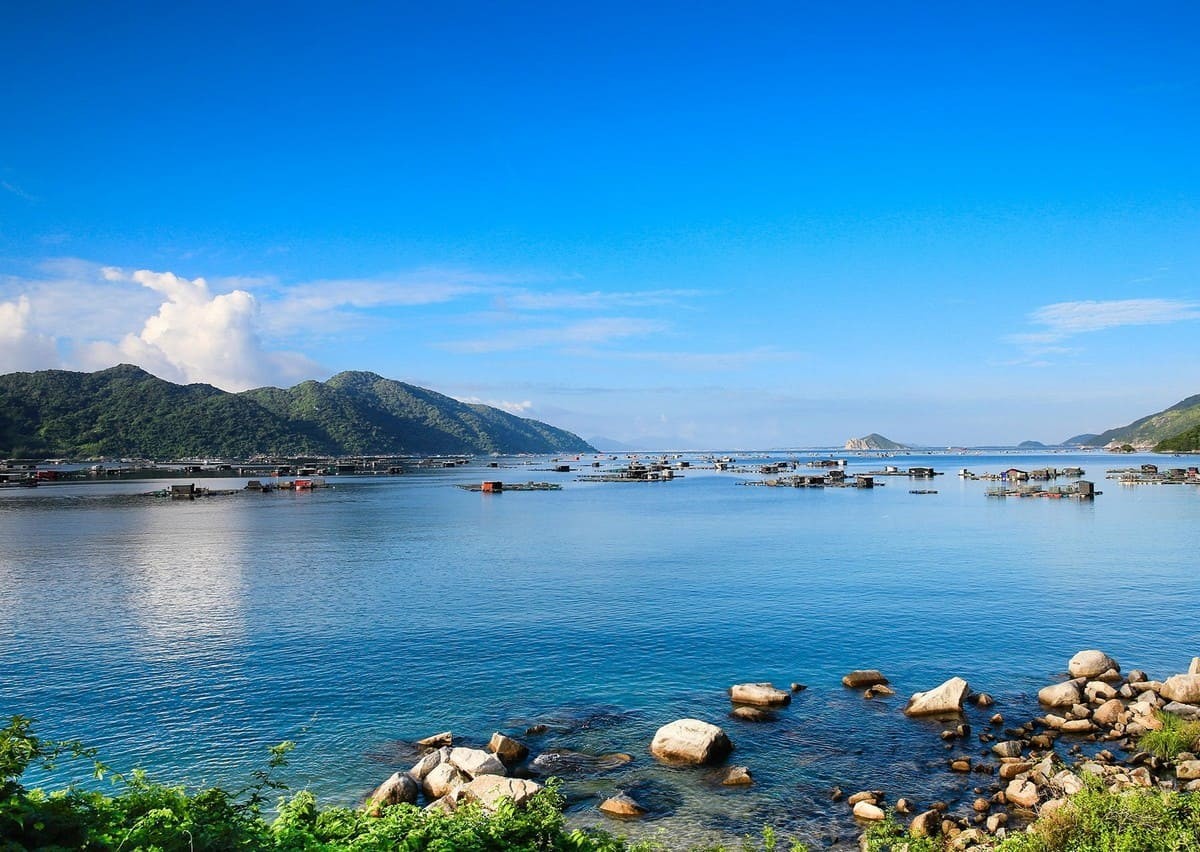 ♦ Must see: You can rent a boat to visit the famous sites of the Bay or to explore Hon Nua Island.
Cuisine: Rent a boat to go to floating rafts in the bay, where there is a variety of fresh seafood such as oysters, ark clam, sea urchin, shrimp, crab, squid …

Phun Abyss lies in Da Den Mountain Range in Hoa My Tay Commune, Tay Hoa District, surrounded by lush trees and rolling hills, creating a truly romantic landscape. The streams from Ca Pass have formed the confluence of Banh Lai River. From the upstream of Banh Lai River at an altitude of 50 metres above the sea level, these streams flow through the granite layer then erode into the valleys, creating a deep abyss called Phun Abyss. This name comes from the geological structure where the above abyss consists of layers of solid rock and the bottom consists of soft rock eroded gradually along with time and forming holes. The water from the upstream flows down to the abyss of white foam, as if under the water there is a huge fountain sprouting the water up high. 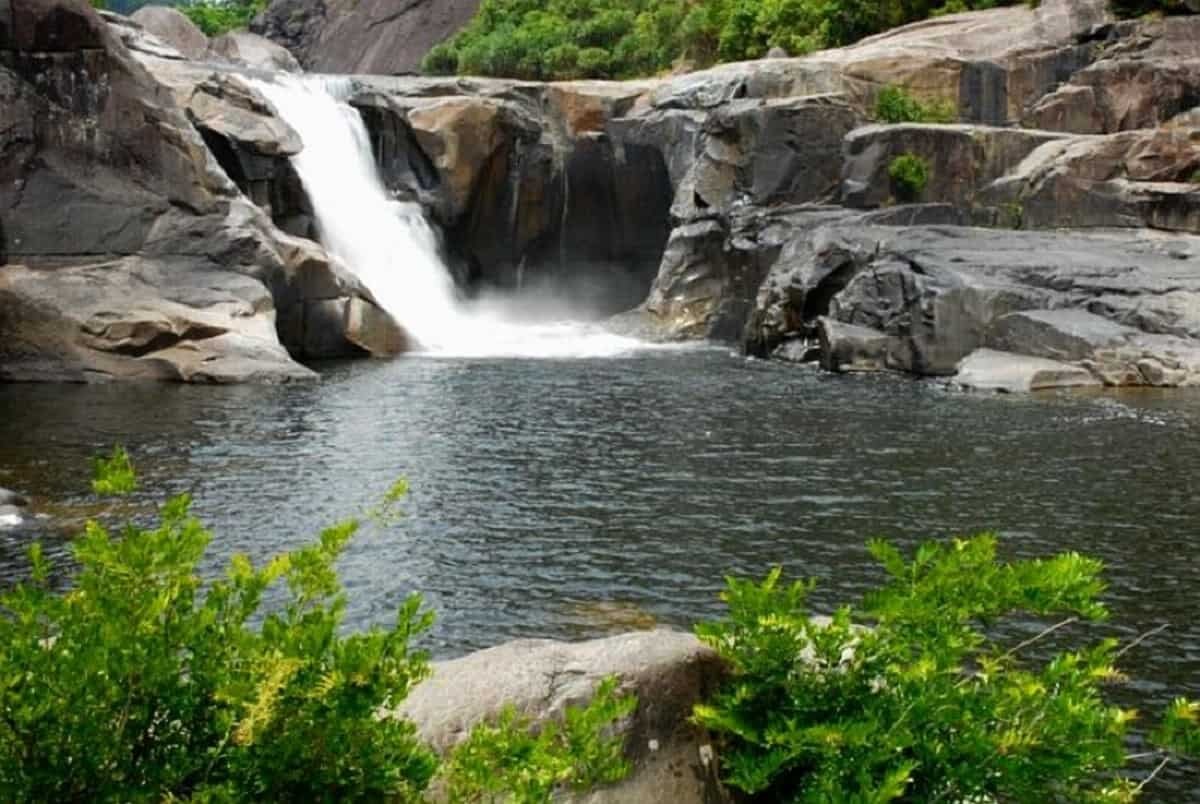 ♦ Cuisine: Got to Tuy Hoa City for lunch, as you will find a wide selection of dishes.

Located 80 kilometres from Tuy Hoa City along National Highway 25, Krong Trai Nature Reserve is located in Krong Trai and Krong Pa Communes, Son Hoa District. This is where the ecosystems transform from the West to the East of Truong Son Range, so the fauna and flora are extremely diverse. The reserve covers 22,290 hectares, with about 236 species of plants, 50 species of mammals, 182 species of birds and 22 species of reptiles. Among them, there are many rare animal and plant species for scientific research. In addition, Krong Trai is also a place that preserves the traditional culture of ethnic minority people such as E De and Ba Na with festivals including Buffalo Sacrifice, Seasonal Festival, Khan Singing and Tomb Art. 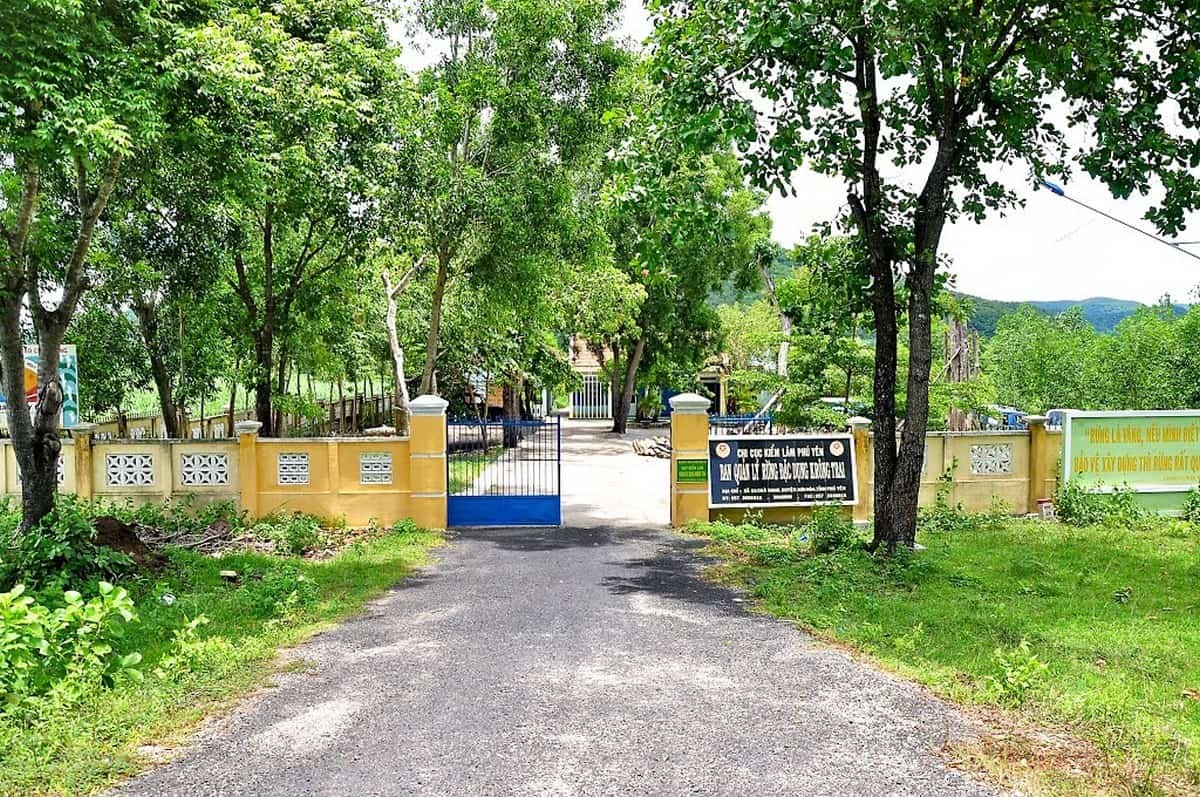 ♦ Cuisine: Along National Highway 25 to the National Reserve, there are many restaurants such as: Ben Song Restaurant, Mon Coffee and Thach Thao Coffee.

Located at an altitude of 100 metres above sea level, with an area of about 5,000 square metres, Tu Quang Pagoda is located on Xuan Dai Mountain in An Dan Commune, Tuy An District, about 35 kilometres to the North of Tuy Hoa City. The temple is located amidst an area full of white stones, so it is also called the White Stone Pagoda (Bach Thach Pagoda). The back of the temple leans against the Xuan Dai Mountain Range, while the front faces the South, overlooking Cai River (Ngan Son River) and Nhan My River. In a large area to the West of the temple, there are eight stupas to worship monks and the abbot of the temple, and it is considered one of the top unique architectural treasures in Central coastal provinces. 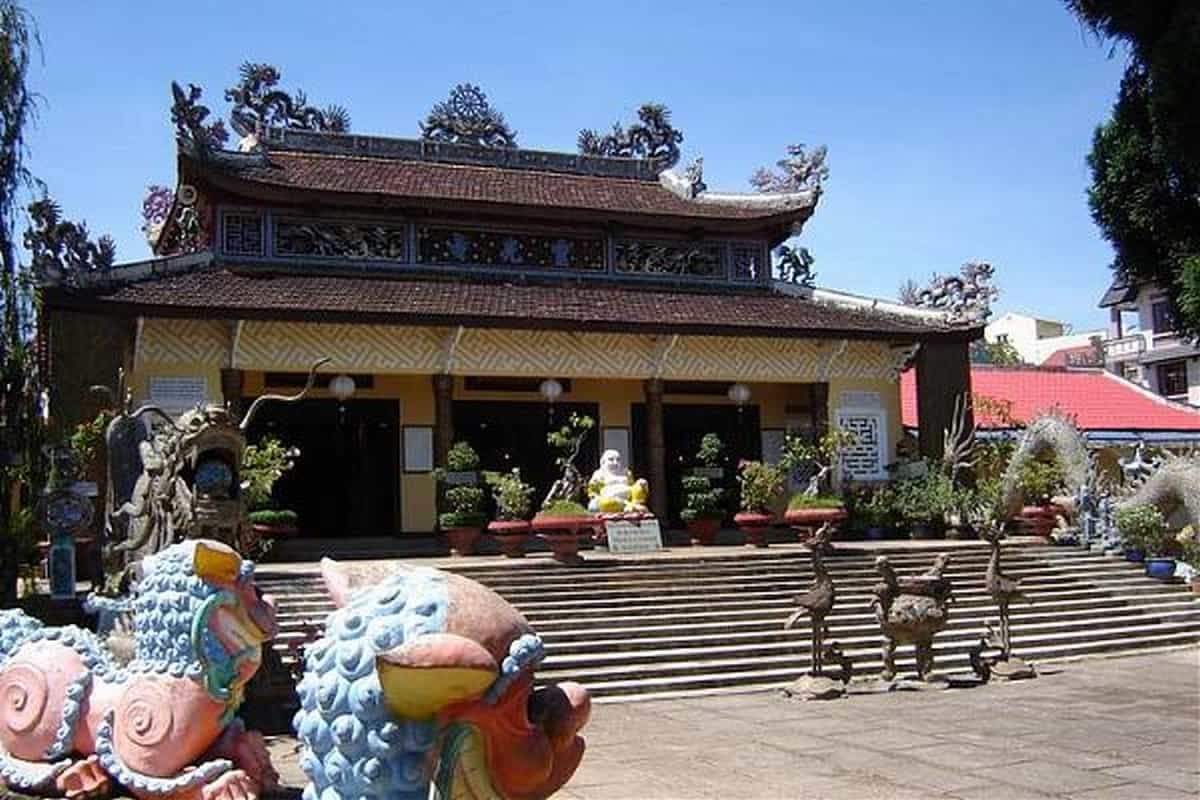 ♦ Top tips: Standing in the courtyard, you can see the entire view of the river and the wonderful blue mountain. Surrounding the temple is a mango garden that appeared in Phu Yen poems as a typical product of this land: “White Rock Mango, Silk Ward Cassava”.

♦ Cuisine: On the way from Tuy Hoa City centre to Tu Quang Pagoda, you can visit O Loan Lagoon to enjoy a variety of delicious seafood.