Almost a decade ago, we were introduced to the wonderlands of lush hills and magical mountains in the famous franchise The Lord of the Rings, and to anyone’s surprise, the land that was only believed to exist in movies was actually New Zealand. And now, the charming, irresistible beauty of this country is revitalized again for another magical sequel, The Lords of the Rings – The Rings of Power. Let us venture once more to the magical land, only this time, pay our tribute to the smaller but significantly alluring side of New Zealand, the resident towns, and their people.

New Zealand, an island nation in the Pacific Ocean, is widely regarded as an adventurer’s dream. Every site and activity in this lovely country seems to encourage visitors to get out and about more. 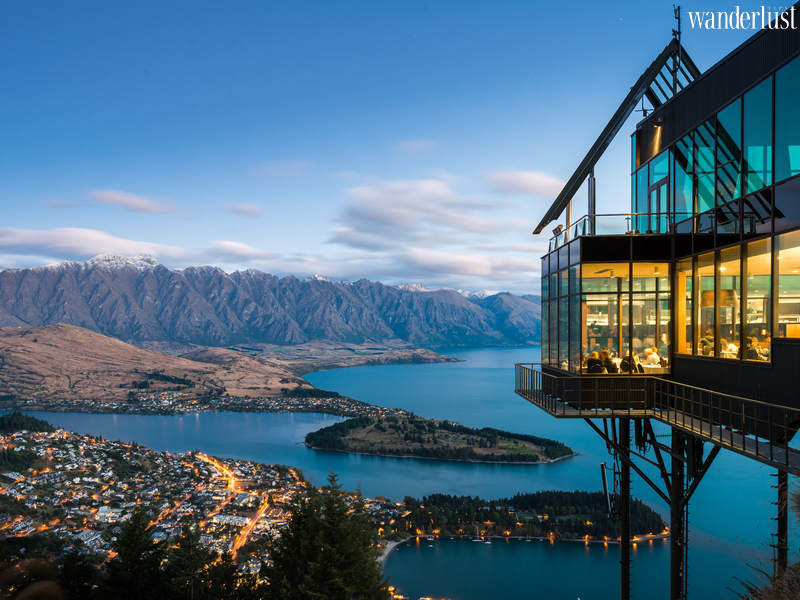 Caving, skydiving, bungee jumping, skiing, and hiking are just a few of the activities available. New Zealand takes pleasure in being a traveler’s favorite due to its exhilarating natural beauty. Aside from all of this greatness, New Zealand has a number of incredibly charismatic tiny towns that are a must-see. 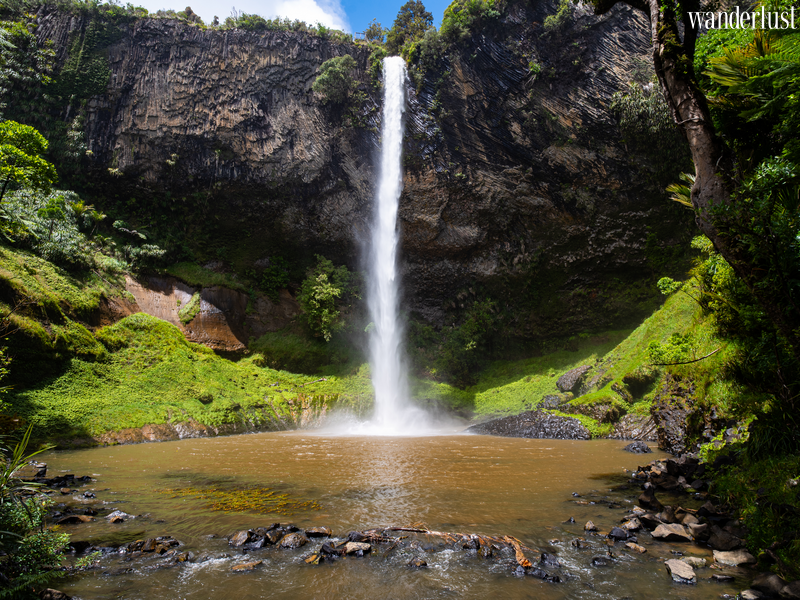 The coastal hamlet of Raglan, known as New Zealand’s surfing mecca, is just a few kilometers from Hamilton, the country’s fourth-largest city. If you’re not a fan of the sport, the small hamlet also has a lovely weathered setting with trekking chances to the mighty Bridal Veil Falls summit or traveling a little further to the Te Toto Gorge, which holds the famous Maori Gardens’ ruins. 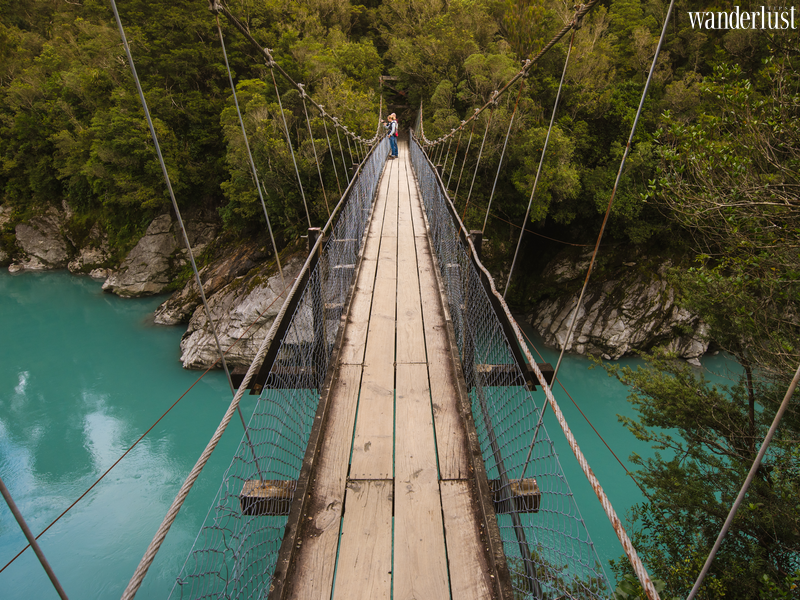 Hokitika, which is located near the namesake river, rose to prominence as a gold mining town in the 1860s. Today, it is in close proximity to several of the South Island’s natural attractions, including Arthur’s Pass National Park and the Franz Josef Glacier. You must visit the Hokitika Gorge Scenic Reserve and go white-water kayaking in the vicinity while touring the area. 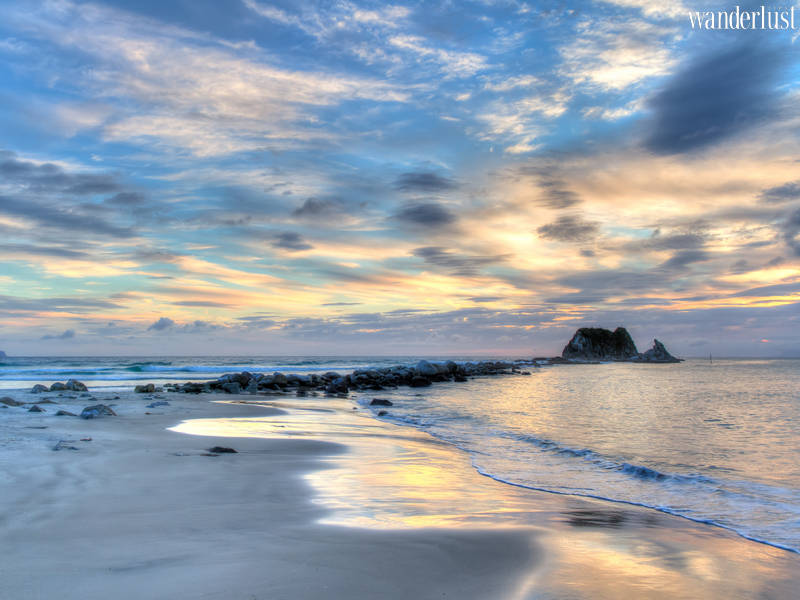 Despite being barely a hundred kilometers from Auckland, New Zealand’s largest metropolis, Mangawhai appears to be a world apart from the bustle of such a large city. Enjoy surfing on the Pacific beaches or swimming and kayaking in the calm harbor, which is surrounded by sand dunes, when you visit this town. 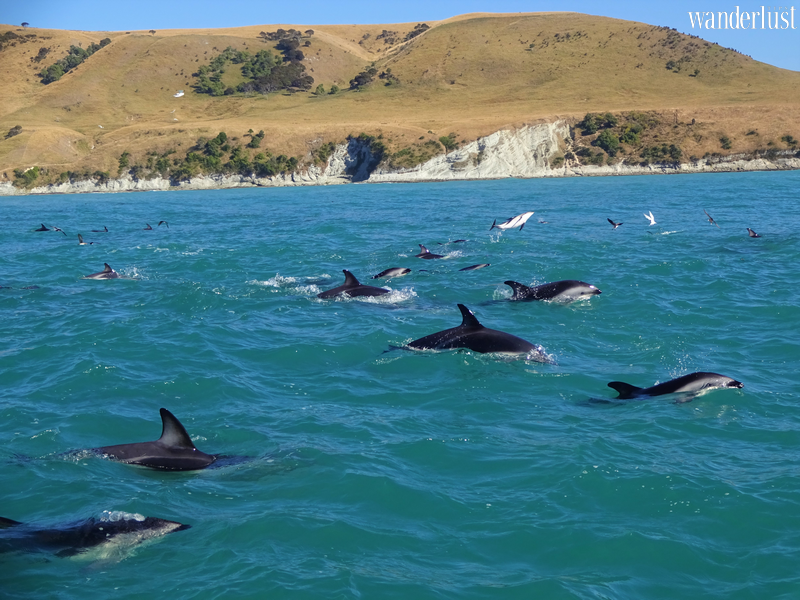 Kaikoura, a picture-perfect coastal town a few hours north of Christchurch, is known among visitors for its marine mammals, eco-friendly lifestyle, and terrain that juxtaposes the country’s magnificent shoreline with its jagged mountains. The town is known for its fishing prospects, but there are plenty of other activities to keep you busy.

Take a cruise to see dolphins, whales, and other exotic marine animals, don a wetsuit and scuba dive among some of New Zealand’s best reefs, or simply take a walking tour through this lovely town. 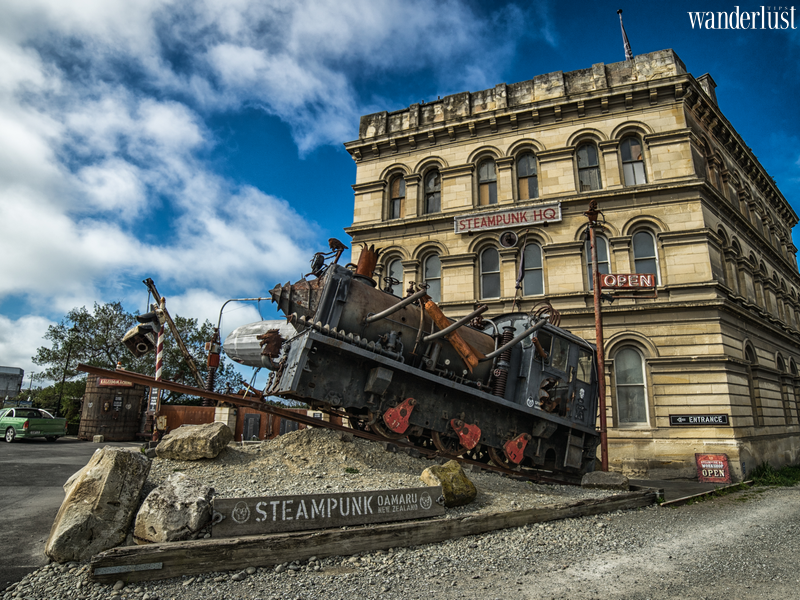 Oamaru, New Zealand’s self-proclaimed “Steampunk Capital,” is known for its Victorian architecture, laid-back ambiance, eccentric art culture, and, of course, penguins. Most visitors come to see the penguin colonies, but if you stay a little longer, you’ll like the artsy ambiance, the numerous boutique shops, and the all-encompassing steampunk scene. 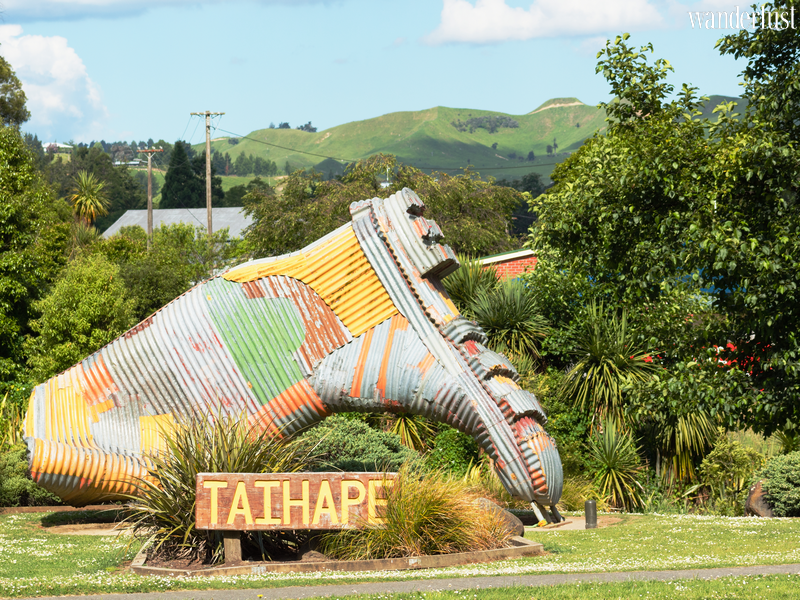 Taihape is known as the “Gumboot Capital of New Zealand” by the general public, but it is also a hotspot for adrenaline addicts and horticulturists. Visit one of the four famous gardens in the area, Kiri Kiri, Rongoiti, Titoki, and Waltoka, if you are a keen gardener (or not). 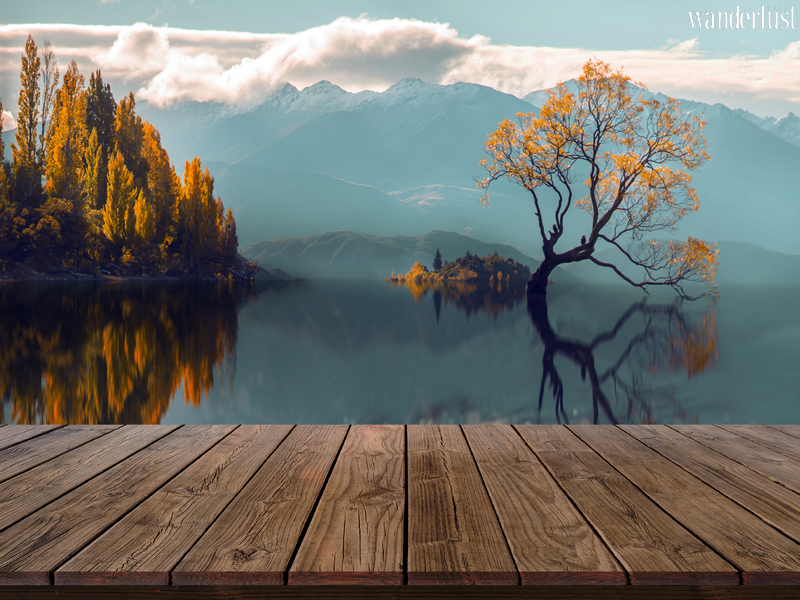 Wanaka is a lovely lakeside town on New Zealand’s unspoiled, rocky South Island, named for the namesake river and set against a background of snow-capped mountain peaks. The awe-inspiring Mount Aspiring National Park, which is home to multiple waterfalls, glaciers, and beautiful peaks and was featured in The Lord of the Rings, lies right outside its door. 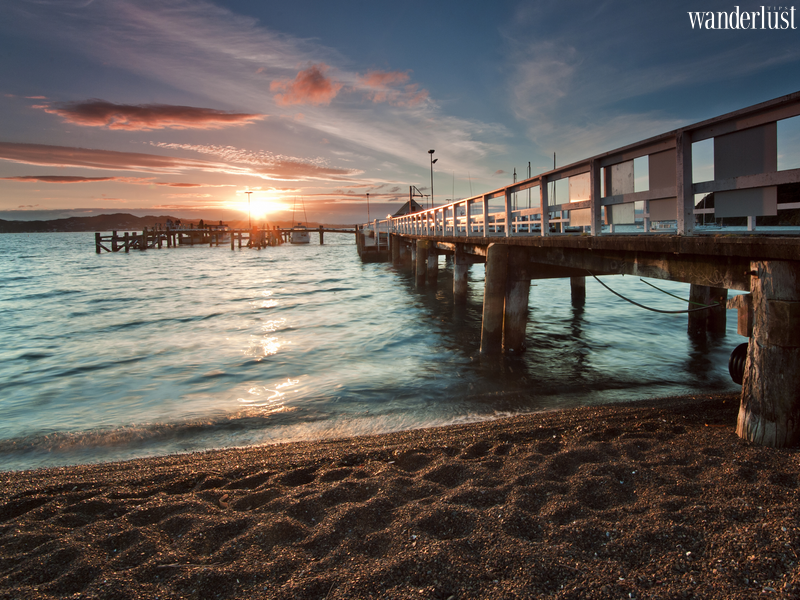 Russell, formerly known as Kororreka, was the country’s first European colony and harbor. When you’re here, take a kayak tour around the Bay of Islands, visit Pompallier Mission, the only remaining edifice of the French Catholic mission headquarters and the only one of its kind in Australasia, and explore the historical architecture and excellent galleries. 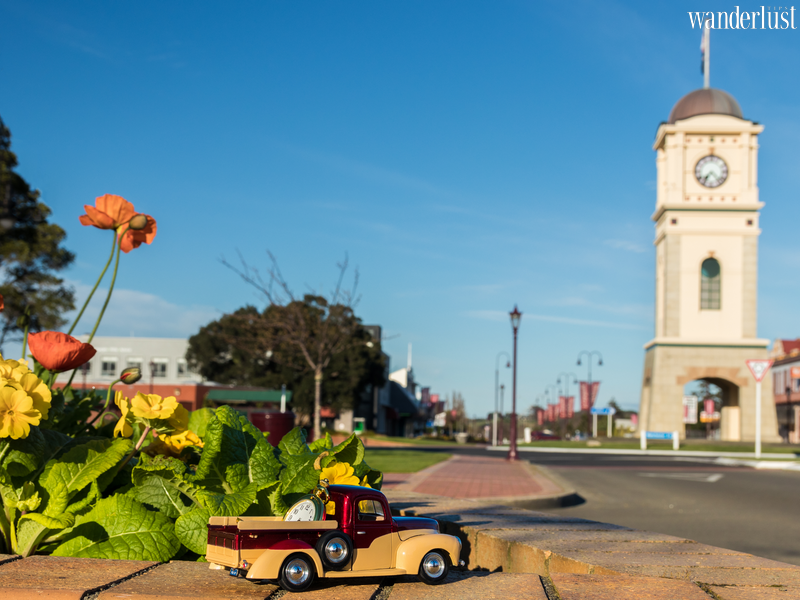 Feilding is noted for its stunning Edwardian architecture, boutique shopping, historic museum collections, and rural charm, and has won Keep New Zealand Beautiful’s Most Beautiful Town title 14 times. Feilding is the rural heart of the Manawatu District, located immediately north of Palmerston North. Feilding Saleyards, a livestock sale conducted in town since 1880, and the monthly Feilding Farmers’ Market are both located there. 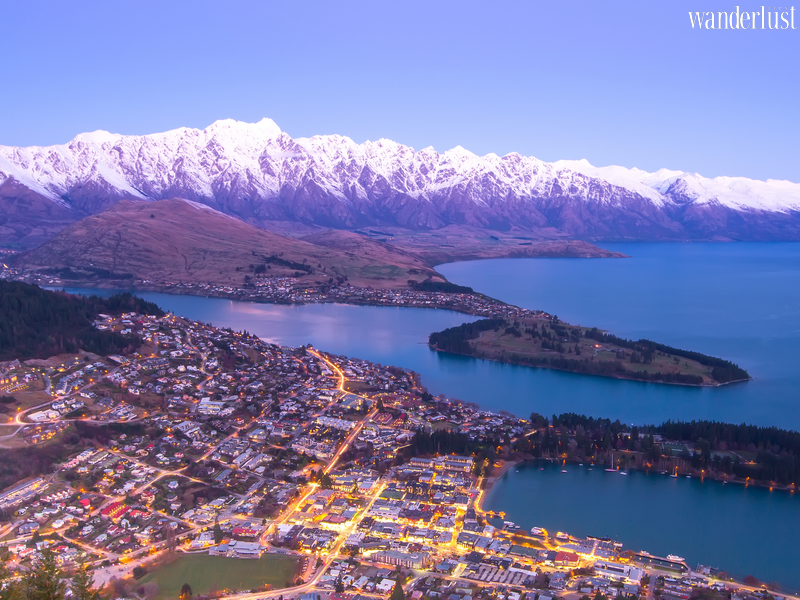 Queenstown dubbed the “adventure capital of New Zealand,” is located on the South Island’s scenic Lake Wakatipu. Being on the water’s edge allows the town to host a variety of activities, including relaxing boat tours, adrenaline-pumping jet boating, hiking, strolling, bungee jumping, skydiving, white-water rafting, and just about anything else!

Queenstown is undeniably one of New Zealand’s most beautiful places. It’s small and peaceful during the day, yet energetic and buzzy at night. The town is lined with fine-dining restaurants and cafes, and the calendar is jam-packed with cultural events all year, including the massive Queenstown Winter Festival.