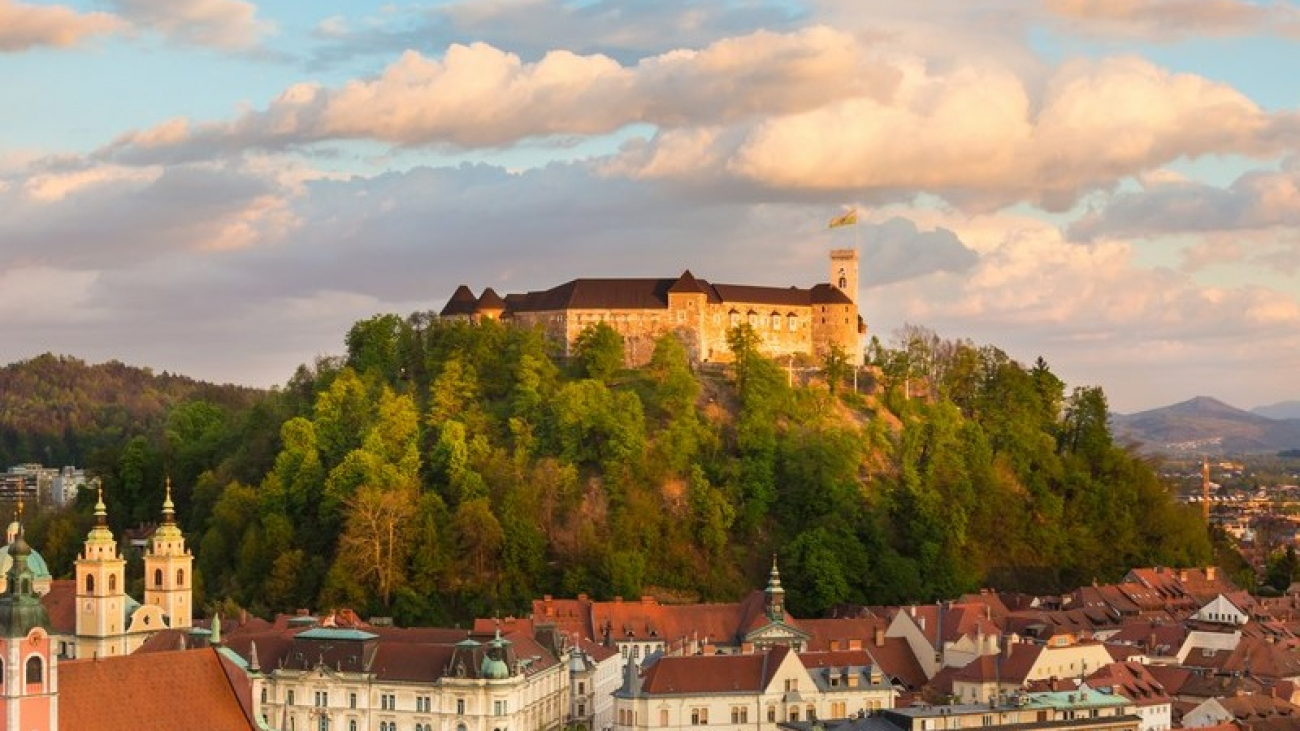 Bordering Italy, Hungary, Austria and Croatia, the small country of Slovenia is much less talked about than its neighbouring European counterparts. However, the captivating landscapes and ancient architectural works are drawing tourists into this marvellous wonderland. 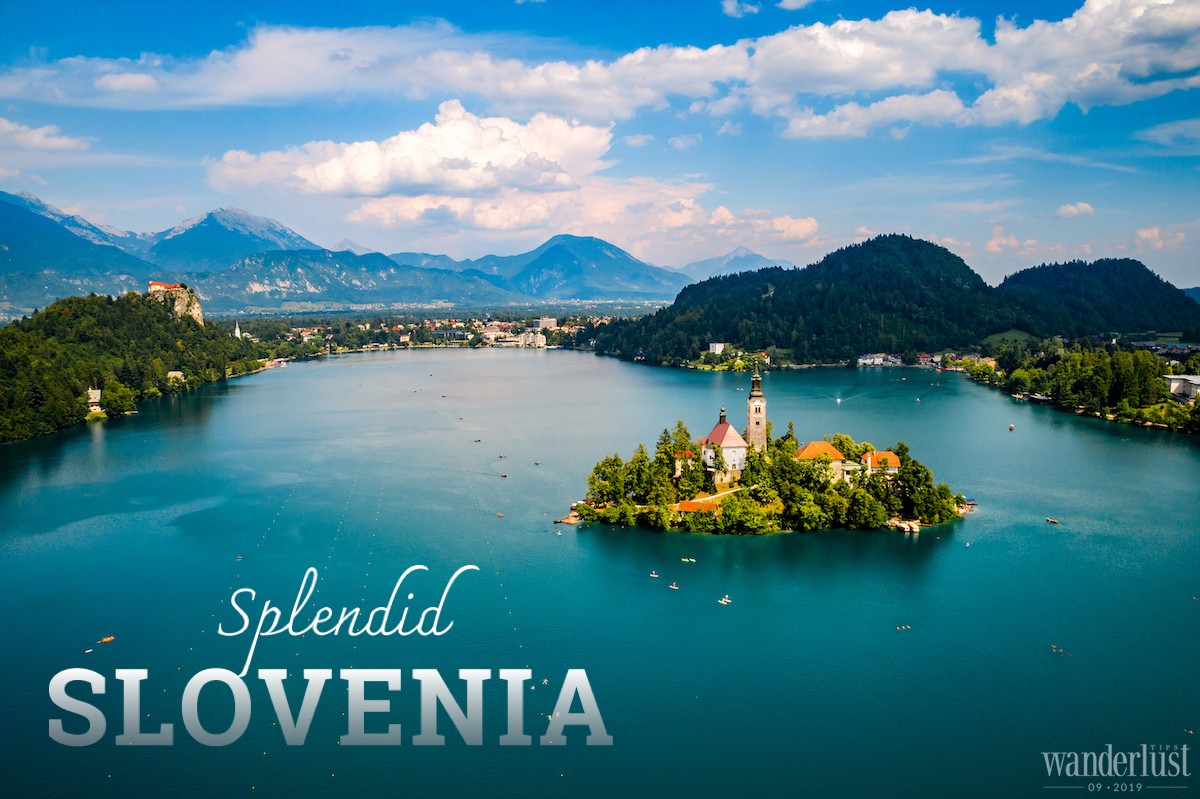 Just a two-hour flight from Paris, Ljubljana the capital of Slovenia is certainly a country that will surprise you. Located in Central Europe, Slovenia is bordered by Austria to the north, Hungary to the northeast, Croatia to the southeast, the Adriatic Sea to the southwest and Italy to the west. With such interesting geography, Slovenia is a rather delightful melting pot of European cultures. It has a population of over 2 million and covers more than 20,000sq. km with an impressive number of protected areas. According to statistics, protected nature areas account for around 12.6% of the country, 36% of the country is protected by Natura 2000 (the network of nature protection areas in European countries) and nearly 15,000 natural sites were awarded as valuable gifts of nature. 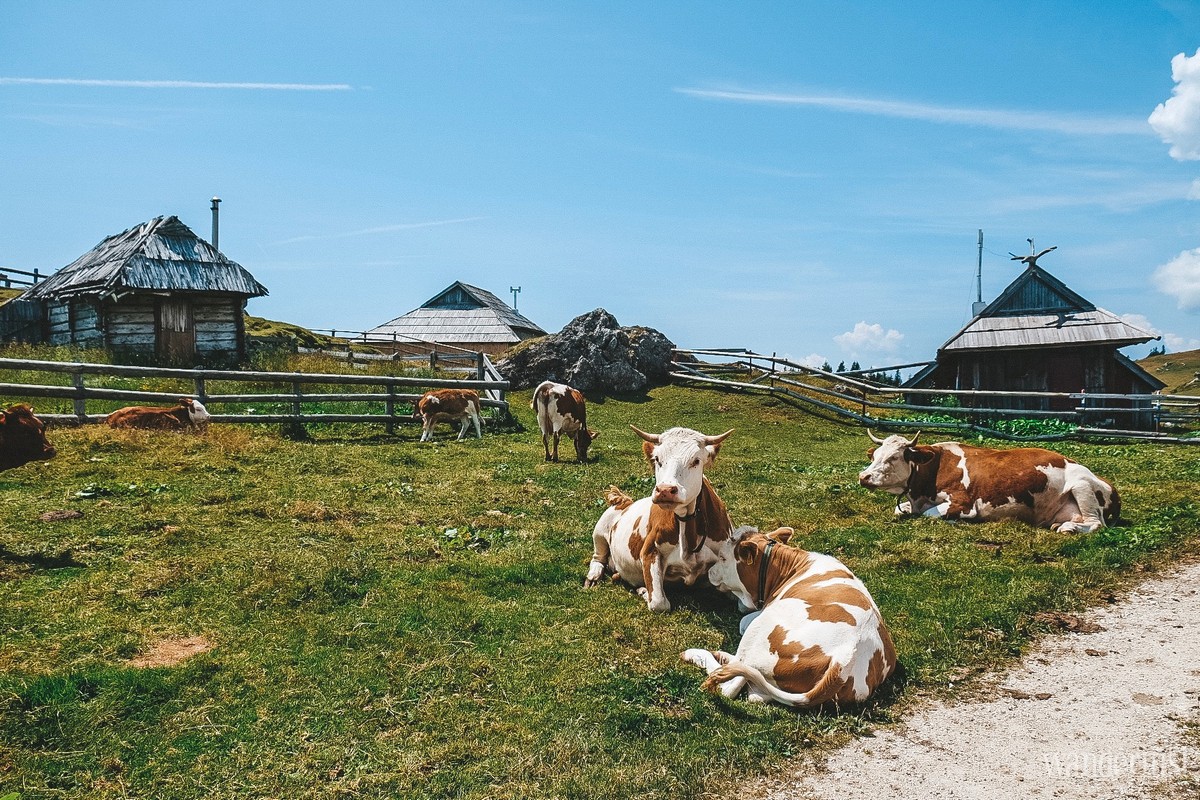 If you are impressed by the beauty of the Alps, you can admire a part of the Kamnik – Savinja Alps from Velika Planina – one of Slovenia’s most iconic landmarks. Velika Planina means vast pastures. The wavy lawned terrain of Velika Planina is the perfect place to graze cattle. Velika Planina is not a mountain, more accurately, it is a plateau. Farmers graze their cattle on this wonderful highland pasture as soon as spring is over. The pastures come alive between June and September each year with the enchanting sound of dairy cattle and the bells worn around their necks. These bells are used to distinguish between the leading cattle and others.

So, what makes Velika Planina one of the top tourist attractions in Slovenia? It is home to 60 wooden huts built in an architectural style unique to this region from the middle age. The pine huts are constructed in the traditional style of the mountain regions, with shingled oval roofs extending nearly to ground level. The spruce shingles used to roof the huts were carved manually instead of using cutting machines to ensure that the intact shingles were able to support the drainage system of the roofs. This traditional style of construction has been maintained over the years, just imagine the amount of effort and time required to be able to build one hut. 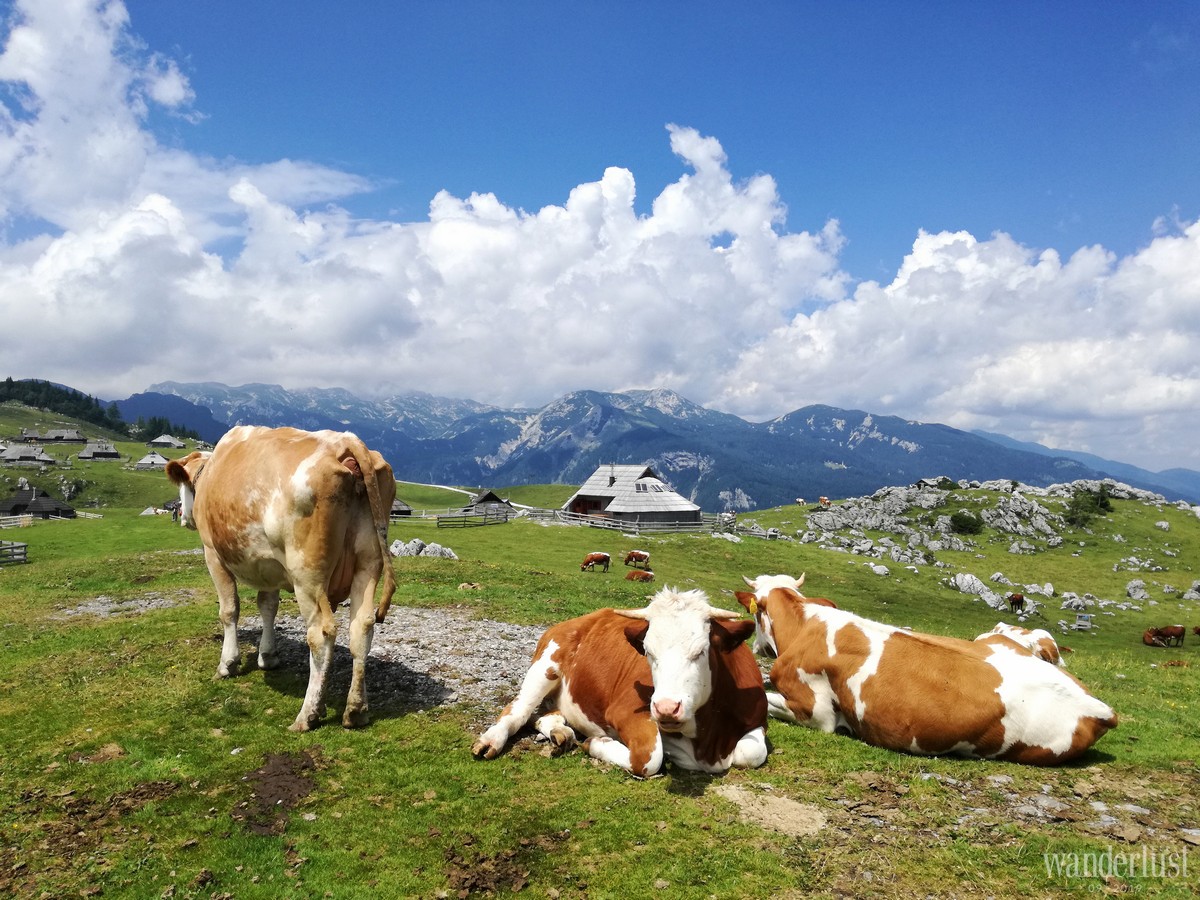 Velika Planina is home to the Chapel of Our Lady of the Snows that was modelled on the traditional architecture and located above the surrounding wooden huts. On a sunny day, tourists can feel the peaceful energy whilst admiring this impressive building perched high on the hilltop.

During the tour, the native guide will show you how to age the wooden huts due to the colour of the hut roofs. The tents with a dark-coloured roof usually black or grey are the oldest tents.  The number of huts is maintained and the construction of new tents is not permitted.  To build a new hut, its owner must prove that the previous hut is no longer safe to use. They must ask permission and before erecting the new hut, the owner needs to remove the old hut. Sometimes you might come across huts in different phases of their construction, one being dismantled whilst another is being constructed. 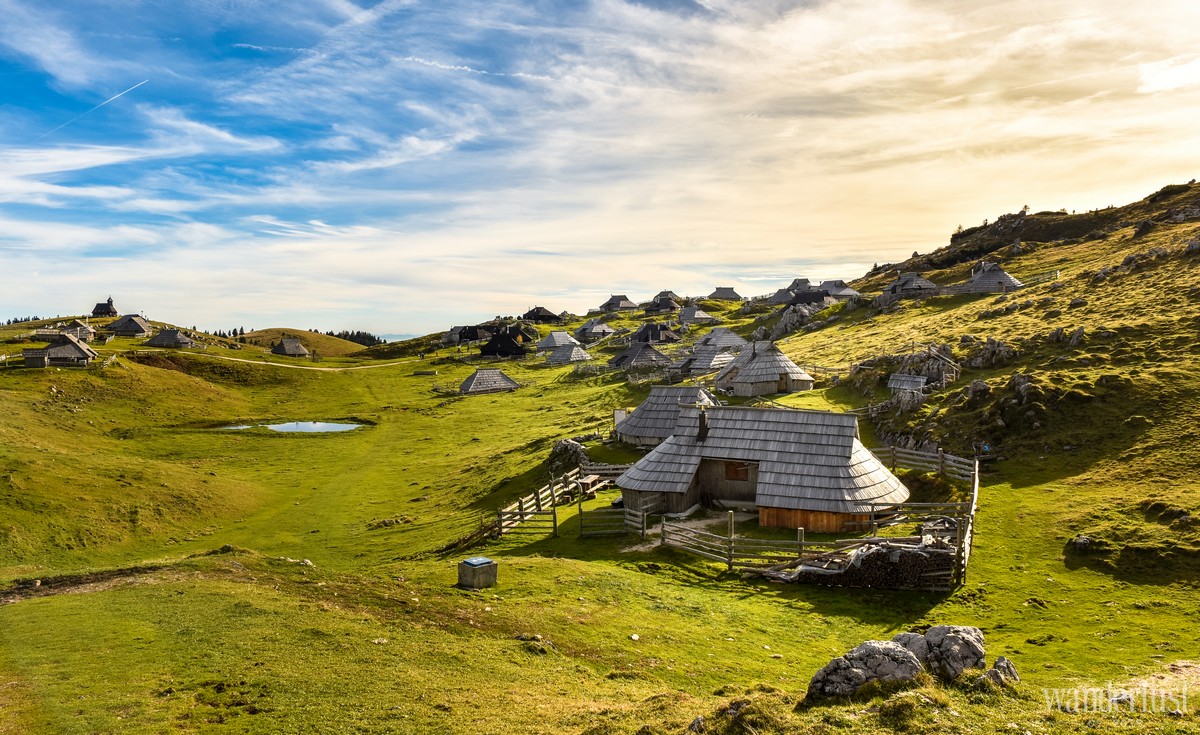 Many wooden huts in Velika Planina, including the oldest huts from the 16th century, are still being used in the summer months. To get a better understanding of this, you could visit the small museum where you will have the opportunity to listen to an introduction to the structure of the houses and take a look inside. You will be surprised to know that only men and husbands stay in huts during the summer months. Their wives and children will stay in the valley below.

These huts will be empty during the remaining months of the year because the weather conditions and food are no longer suitable for the cattle. Additionally, you can wear the unique traditional raincoats of the native farmers. Taking a stroll along the steep side of the hill will have you working up an appetite. Do not hesitate to try traditional regional dishes such as mushroom soup and cheese dumplings. Admiring the peaceful pace of life and lush greenery on summer days in Velika Planina will make for an unforgettable trip. 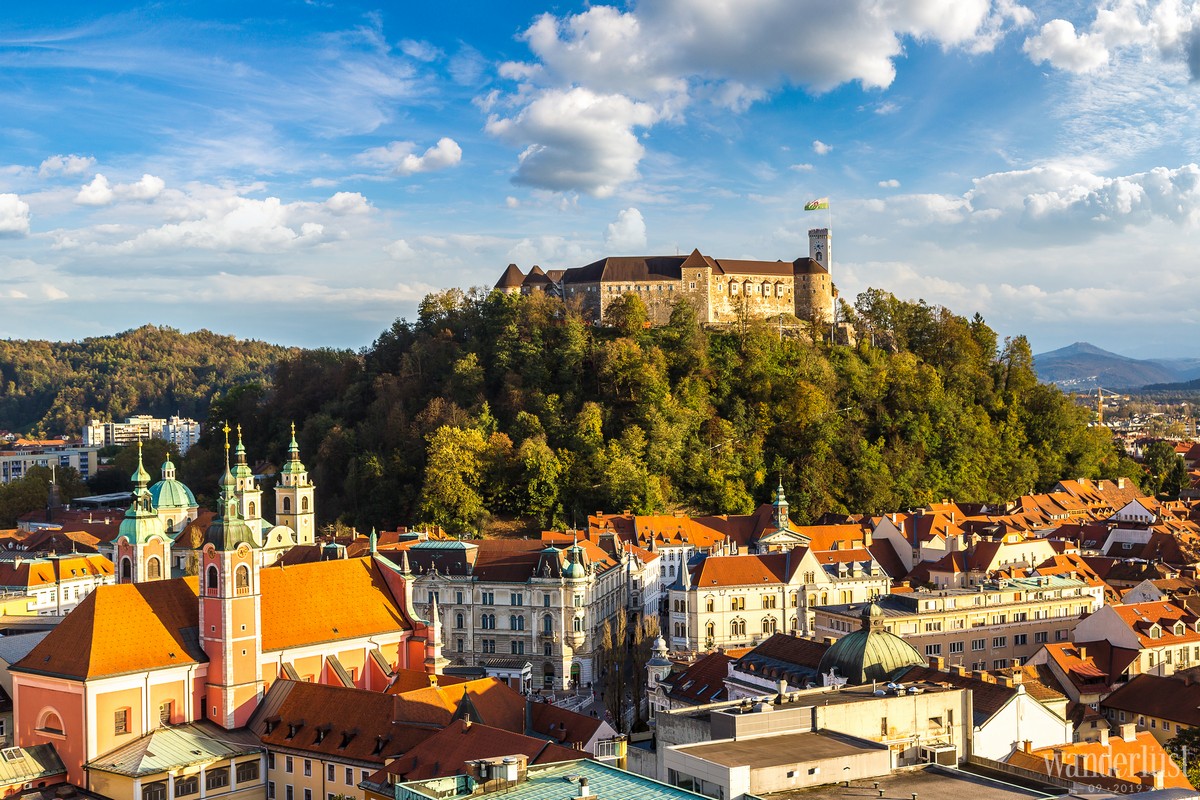 Around a 50 minute drive from the Ljubljana capital, Lake Bled is likened to the precious jade of Slovenia. Lake Bled is located in the Julian Alps of the Upper Carniolan region where it adjoins the town of Bled. It is 2,120m long, 1,380m wide and with a maximum depth of 29.5m. In addition to the beautiful fairy-tale landscape and its picturesque surrounding environment, Lake Bled has many other factors that make it a unique destination.

Firstly, Bled Island – the only natural island of Slovenia is at the heart of Lake Bled. Secondly, the traditional transportation to Bled Island is a wooden boat known as a Pletna boat or gondola dubbed as the queen of Lake Bled. The Pletna boats were used to ferry religious pilgrims across the island many centuries ago. Especially, rowing pletna boats was appreciated here, so the Pletna oarsmen have the right to inherit and ride this traditional boat from generation to generation. Thirdly, the staircase leading from the lake to the buildings above has 99 steps but if visitors count whilst going up, they can only count 98 steps.

You might wonder where the ninety-ninth step is, well tourists often step directly from a pletna to the second step, so they overlook the step submerged in the water. Fourthly, the wish-granting bell was placed in the Pilgrimage Church of the Assumption of the Virgin Mary on Bled Island. The legend says that those who ring the bell and make a wish will see their wish come true. This Gothic-style church was built in the 17th century and was renovated in pre-Baroque architectural style in 1685. 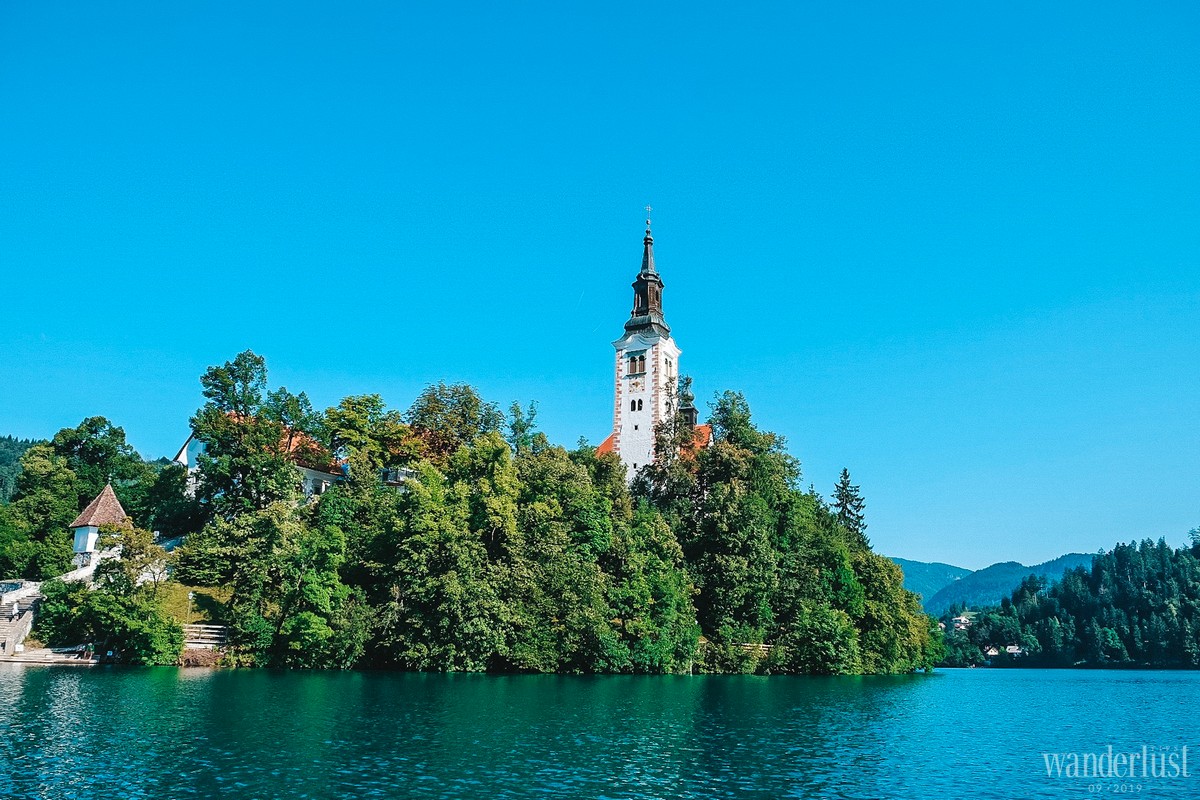 Overlooking northern Lake Bled is the medieval Bled Castle. According to official sources, Bled Castle is the oldest castle in Slovenia, first mentioned in 1011. From the high vantage window in Bled Castle, you can admire the spectacular panoramic view of Lake Bled and Bled Island. The stunningly charming landscapes are adorned with vibrant colours. Additionally, the castle has ironworks, printing works, the knights’ room and a separate chapel. Therefore, the beauty and completeness of the Bled Castle is not only the pride of the Slovenian people but also recognised worldwide. Many famous politicians visited the Bled Castle and were fascinated by the scenery here.

When thinking of the castles, Slovenia is very much straight out of a fairy tale boasting an array of castles or castle-shaped architectural works. According to statistics, Slovenia is home to around 900 castle-style buildings constructed over for centuries. Notably, the 800-year-old unrivalled Predjama Castle was officially recognised as the world’s largest cave castle by the Guinness world record books.

The Predjama Castle is carved into the cliff and connected to a corridor behind and beneath the cave. The castle’s owners had no royal ancestry but chose it due to its excellent defensive position. One of the most infamous owners of the Predjama Castle is the rebel knight Erasmus of Predjama region. Thanks to the secret passages, Erasmus fought against the imperial army for over a year. Rumour has it that that they occasionally see the ghost of the knight Erasmus wandering the castle. Exploring the castle and visiting the highest room, you will feel like the owner of the castle carefully spying on visitors. You will also have the chance to wander around and admire the poetic beauty of the neighbouring town through the observation holes in the castle. 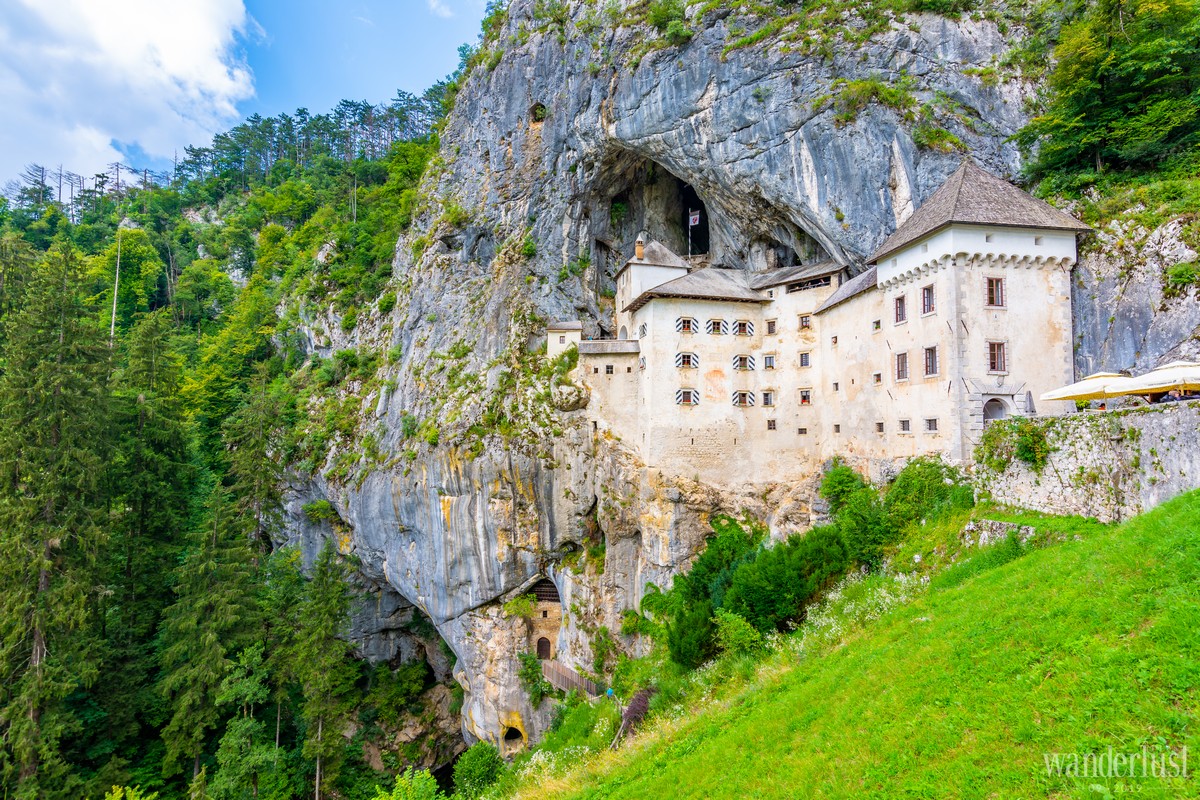 EXPLORE THE UNDERGROUND CAVES – HOME TO THE BLIND FIRE DRAGONS

After visiting the Velika Planina plateau and Lake Bled and exploring the castles, your Slovenian adventure can be completed with a trip to the underground cave in Postojna. This place is truly a miraculous gift of nature with an impressive cave formation. There are countless sparkling stalagmites and stalactites in a myriad of colours and shapes. Postojna Cave has also set impressive records. For instance, the cave has been recognised as the only cave in the world with two railways running inside the cave as well as being the world’s first railway built inside a cave in 1872. The 3.7km-one-way railway is always available for travellers. It has been 200 years since the widest part of the cave was first discovered. The total length of passages interconnected through corridors and stalactites is around 24km and Postojna Cave has welcomed more than 39 million visitors from around the world. 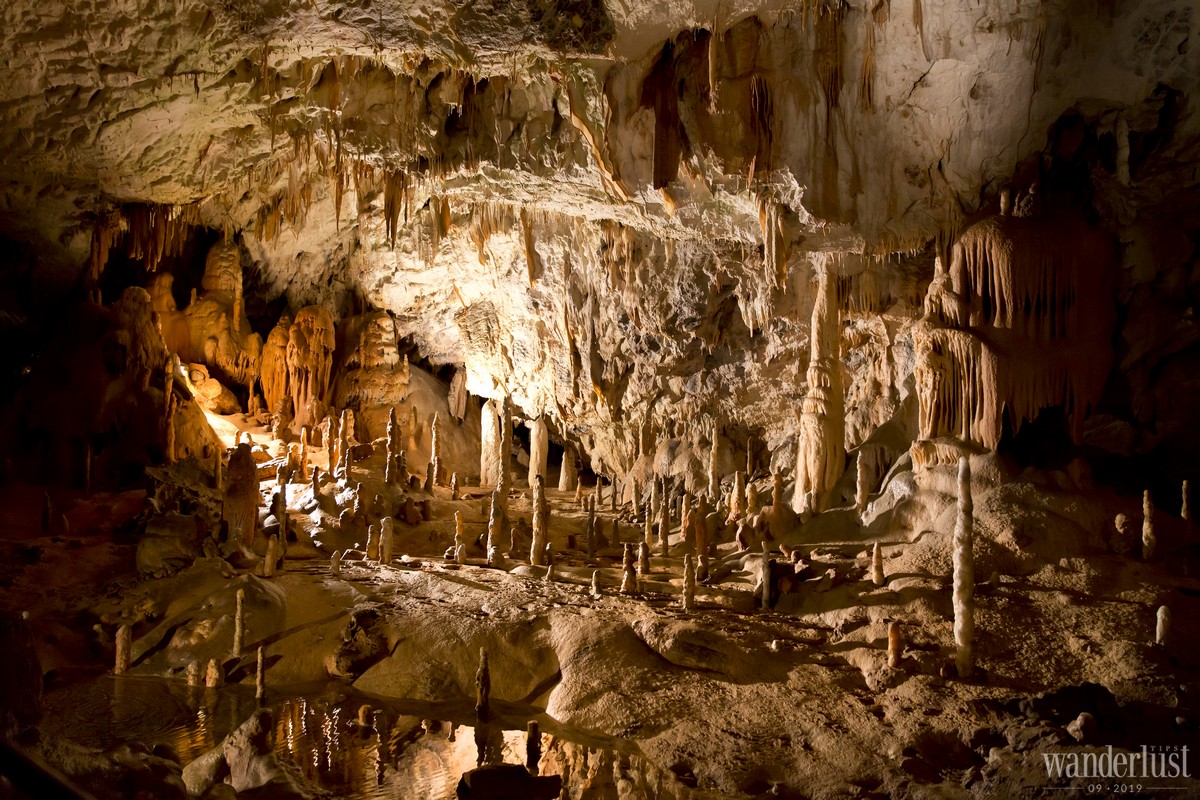 More specifically, the Postojna Cave is home to the olm or Proteus Anguinus, also known as baby dragons, which are in danger of extinction. Residents living around the Postojna Cave past down the legend of the mysterious creature from generation to generation. Scientists also took part in finding this unusual creature. It was not until the water levels rose in the cave that this species of salamander was discovered. They look remarkably like newborn dragons with pinkish- white human like skin, a long body, a long tail and four legs. Giovanni Antonio Scopoli was the first person who documented the creatures in 1768 and they are known as Proteus Anguinus in Latin. The Origin of Species written by Charles Darwin, the pioneer of the theory of evolution also mentioned the creature living in the subterranean Postojna Cave in 1859. The image of the dragon in Slovenia is a symbol of the country and its faith. For example, the picturesque Dragon Bridge in Ljubljana always attracts visitors to take photos. 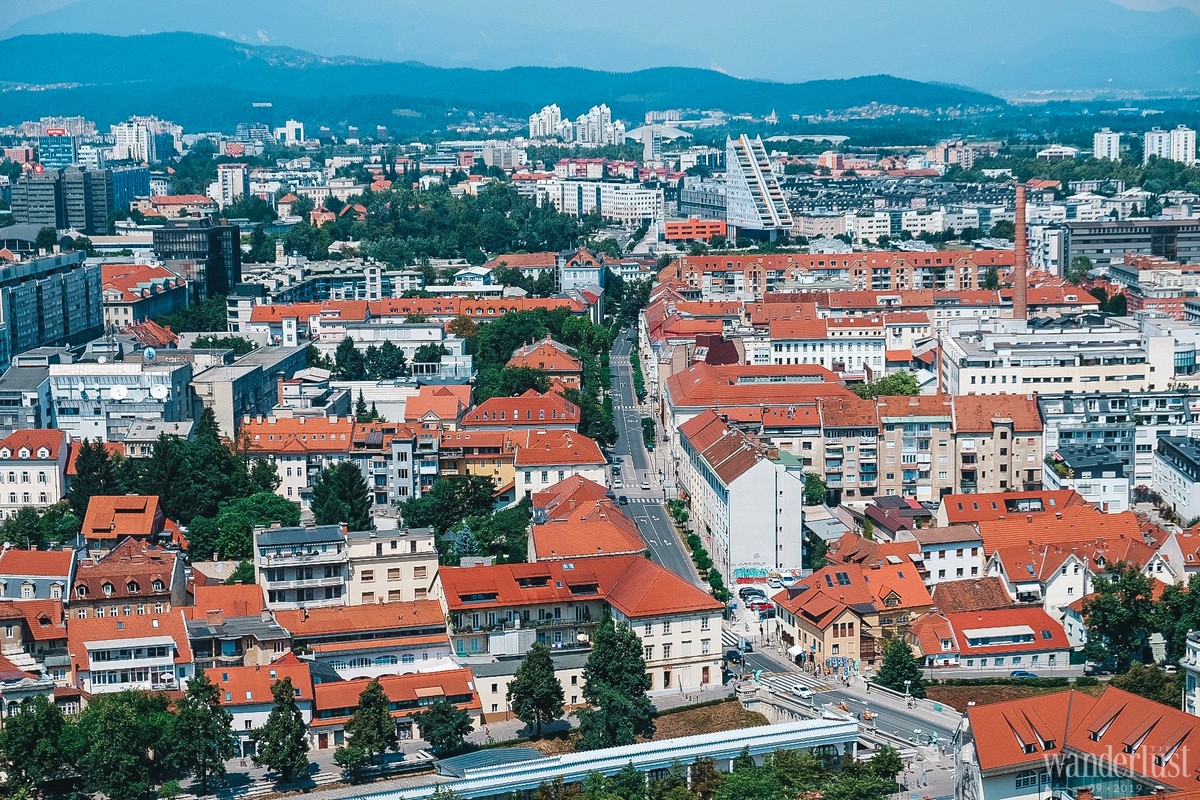 During your visit to Slovenia, you will broaden your horizons through an array of exceptional experiences, unrivalled vistas and landscapes. It might only be a short trip but it will be one that you remember for the rest of your life.

The visa policy of the Schengen Area allows you to enter Slovenia because Slovenia is one of the 26 Schengen countries.

You can catch a two-hour flight to the Slovenian capital from Paris, France. It is also a two-hour drive from Zagreb, Croatia to Ljubljana.

>> The Velika Planina plateau is only used for grazing cattle on summer days. During the trip, you will have to climb the slopes and hills often, so you need to wear trainers or appropriate shoes for trekking. Don’t forget to wear sun cream to protect your skin.

>> You will need warm clothes when visiting Postojna Cave because the ground is quite cold. If you forget, you can rent a coat in the entrance area.

Along the riverbank, the central old town of Ljubljana has an array of beautiful restaurants and cafes. In recent years, on summer days, restaurants and shops are always crowded with people. Thus, it is a good idea to book a table in advance at popular restaurants in this area.