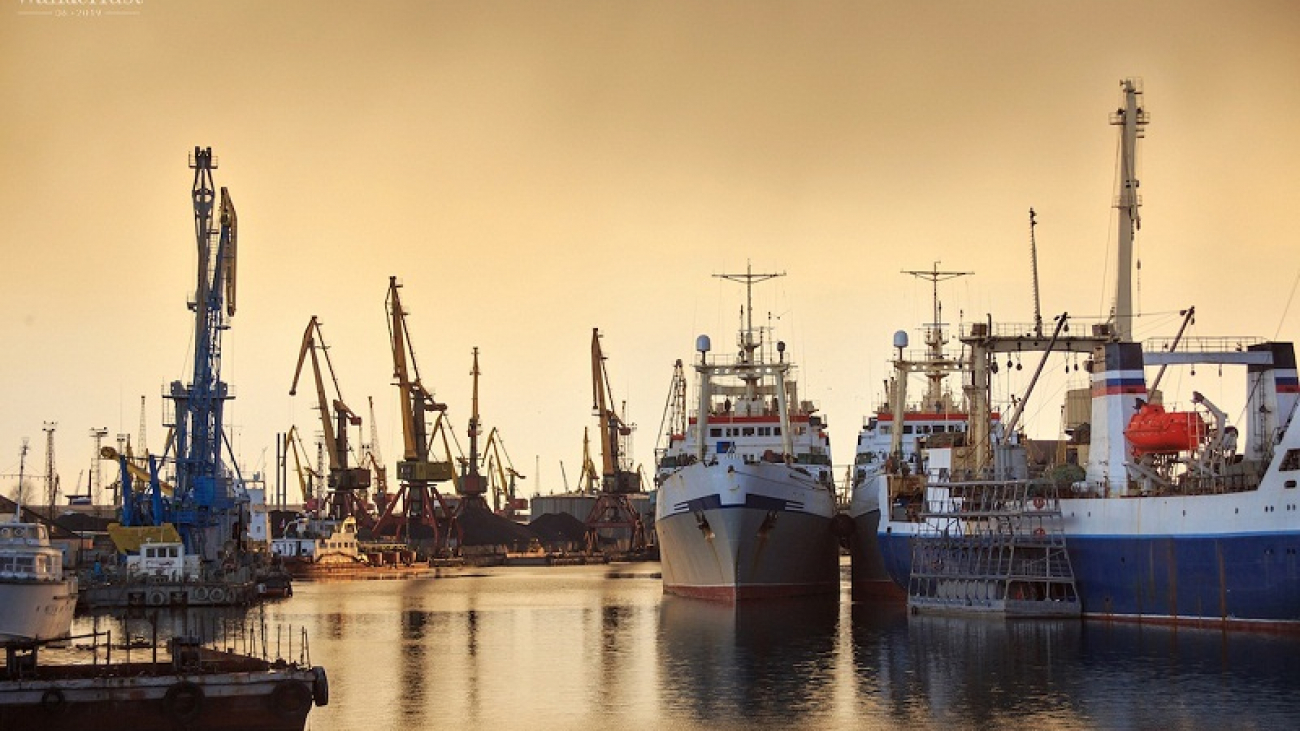 by Wanderlust Tips Team
with no comment
E.MagazineWORLD DESTINATIONS

[Wanderlust Tips June 2019] Kaliningrad oblast not only holds a pivotal position as Russia’s outpost but also impresses tourists with its precious heritage, magnificent natural landscape, and most notably, as the homeland of amber with nearly 90 per cent of world’s amber resources being found here. 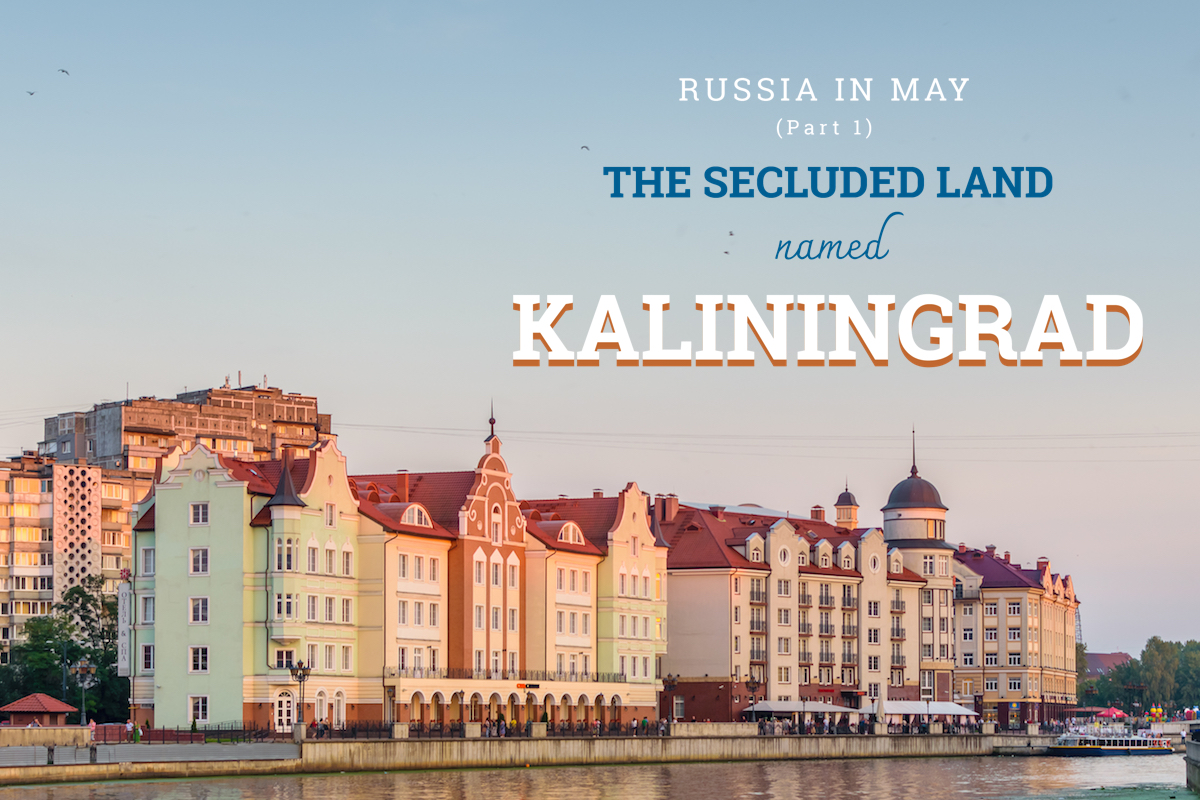 Back in time, before World War I, Kaliningrad Oblast was formerly the northern part of East Prussia in the Prussian Kingdom (a historically German region). Its capital was Königsberg City which was later renamed Kaliningrad – the largest city and administrative centre of Kaliningrad Oblast.

Königsberg was once a beautiful medieval city with neat street corners and shops, Gothic architecturallydesigned churches, and bustling jetties blending with lush green natural landscapes. If you close your eyes, you can imagine the buzzing ambience of this thriving, prosperous city. However, that beauty didn’t last forever as during World War II the city was almost completely destroyed, especially after the bombing raids of the British Air Force. Königsberg was then taken over by the Soviet Army in 1945. Most of the Königsberg’s inhabitants had evacuated en masse beforehand, and the rest were either deported by the Soviet authorities after the war or replaced as the area was repopulated by Russian and Ukrainian settlers. The city was renamed Kaliningrad in 1946 after the Revolutionary Mikhail Ivanovich Kalinin. 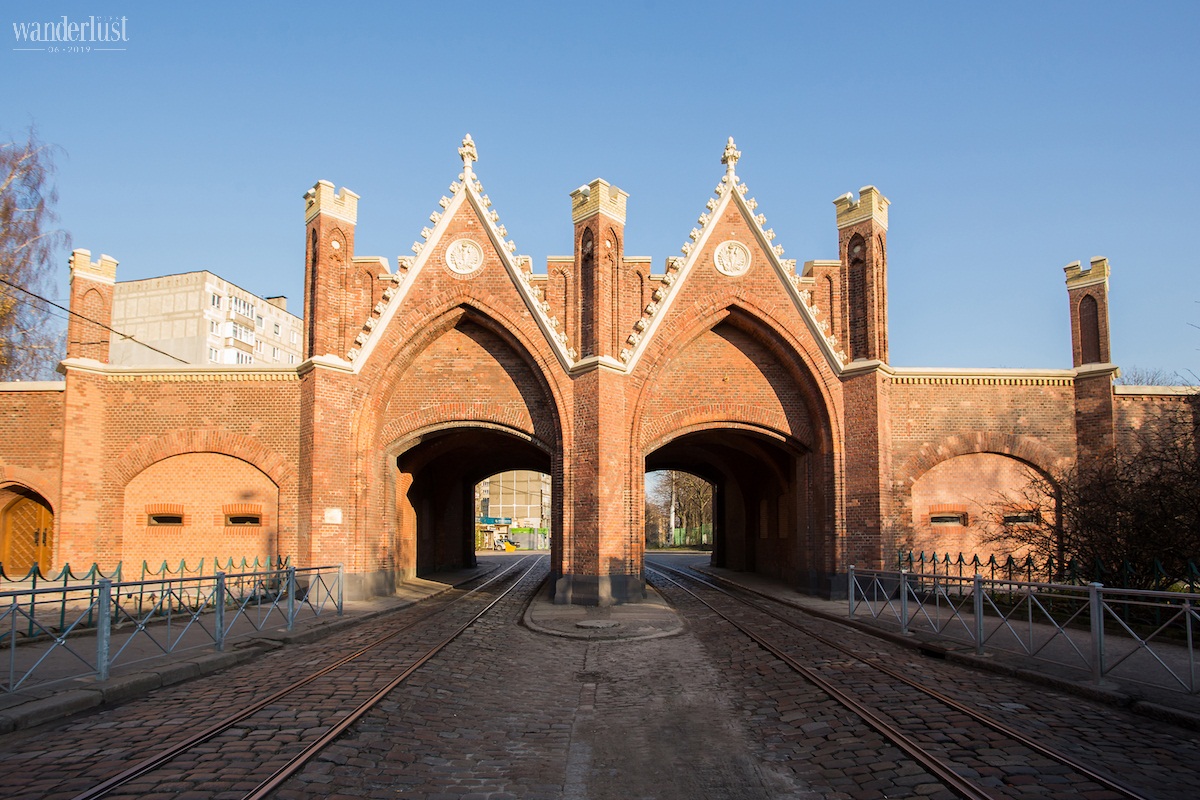 At present, arriving in Kaliningrad, visitors can still find remnants of the old city of Königsberg in areas like the peaceful island of Kant with the Königsberg Cathedral (otherwise known as the Kaliningrad Cathedral), which is also the resting place of the great German philosopher, Immanuel Kant. The cathedral has been around since the XIII-XIV century and has persevered until today through the chaotic ups and downs of history. Another vestige of the past is the Brandenburg Gate on Bagration Road (formerly Berlin Road) which survived the Königsberg bombardments during the siege of the Soviet Army ending in April 1945. There is also a fishing village located on the banks of the River Pregel with several cafes, restaurants and hotels built in 2006 in an effort to reconstruct the ruined architectural heritage of the city. The buildings in the fishing village are styled on old German half-timbered architecture. The smallest details exhibited in the traditional European architecture will take visitors back to the Königsberg of old before the war.

Today‘s Kaliningrad is no longer the Königsberg of the past. The new city sprouting from the rubble is a mixture of the remnants of Prussian relics, traces of the former Soviet Union and newly-built modern buildings. On the streets, overhead wiring is still in place to power the electric trams moving back and forth through the busy lanes of traffic. Kaliningrad’s residents have flowed with this changing rhythm of life, they accept and respect their history and have an endless love with their homeland. And thanks to this, Kaliningrad bears a very distinctive identity, leaving a lasting impression in the hearts of travellers.

THE GENTLENESS OF SVETLOGORSK

If Kaliningrad bears the sorrow of war enveloping its heritage, Svetlogorsk in Kaliningrad Oblast which is about 39km to the northwest has been much more fortunate as it remained relatively untouched compared to the destruction wreaked on Königsberg and other settlements in World War II. Svetlogorsk has what is considered to be the best preserved Prussian architectural heritage among the towns of the former Soviet Union and before that Prussia. 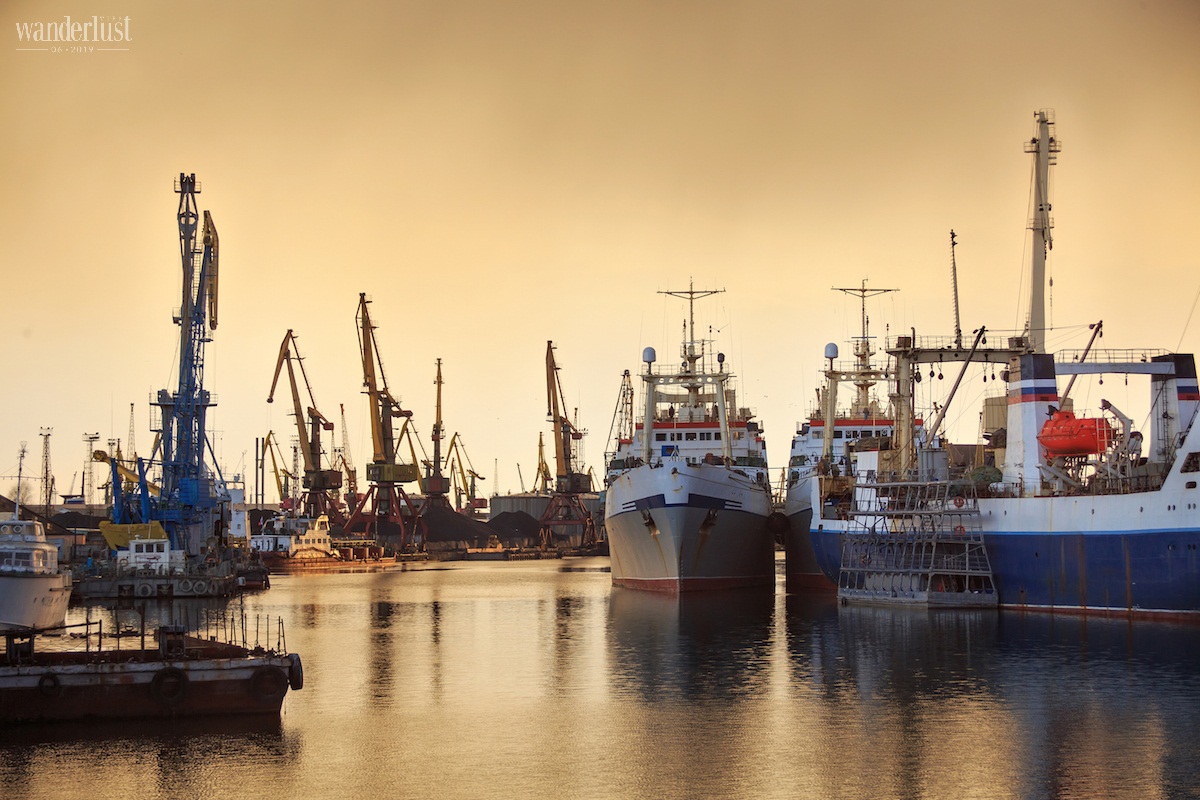 Before 1947, Svetlogorsk was known by the German name Rauschen and was a very famous Baltic seaside resort-town in the early 19th century. The appearance of the Königsberg railway in 1900 was also one of the main factors which enhanced the popularity of this resort. On 14th April 1945, Rauschen was conquered by the Soviet Union during World War II, making it a part of Kaliningrad Oblast, and on 17th June 1947, Rauschen was renamed Svetlogorsk. Up to this day, Svetlogorsk is still a renowned summer resort with a wide range of attractions including splendid beaches, impressive natural landscapes, antique villas as well as attractive restaurants and clubs.

Our Famtrip of Visit Russia Asia went to Svetlogorsk during the days of May when the temperature was only about 10oC. It was not the best time for me to flutter about in the water of the world’s lightest sea, the Baltic, but the weather was still very fresh and pleasant, you might feeling freezing and have a sore nose on a day with a similar temperature back in Vietnam. At this time, Russia is also approaching the White Night Festival, so it was light until around 10pm, and sunrise can be as early as 3 or 4am. Thanks to the long days and short nights, I had more time to take in the stunning scenery of this city in the gentle light that covered all street corners at night.

Wandering on smooth stone-paved roads that are up to a hundred years old, the zigzagging slopes lead me to the countless beautiful nooks and crannies of Svetlogorsk. Lying behind lush green tree lines are villas designed and painted in different styles. Every villa is harboured within a verdant garden filled with trees and flowers, and all boasting its uniquely distinctive beauty. There is a mansion which is uniquely located in a green forest, another is surrounded by a fence, and I can see bushes of bright red and white flowers in full bloom in the garden. There was a turn that lead into the forest, and I chased the glittering sunset through the trees, reaching a path leading to the windy Baltic Sea. The wind was blowing and the waves roared loudly, the sea surface gleamed with sparkling rays of sunshine and far away were beachfront villas full of a sense of romance. 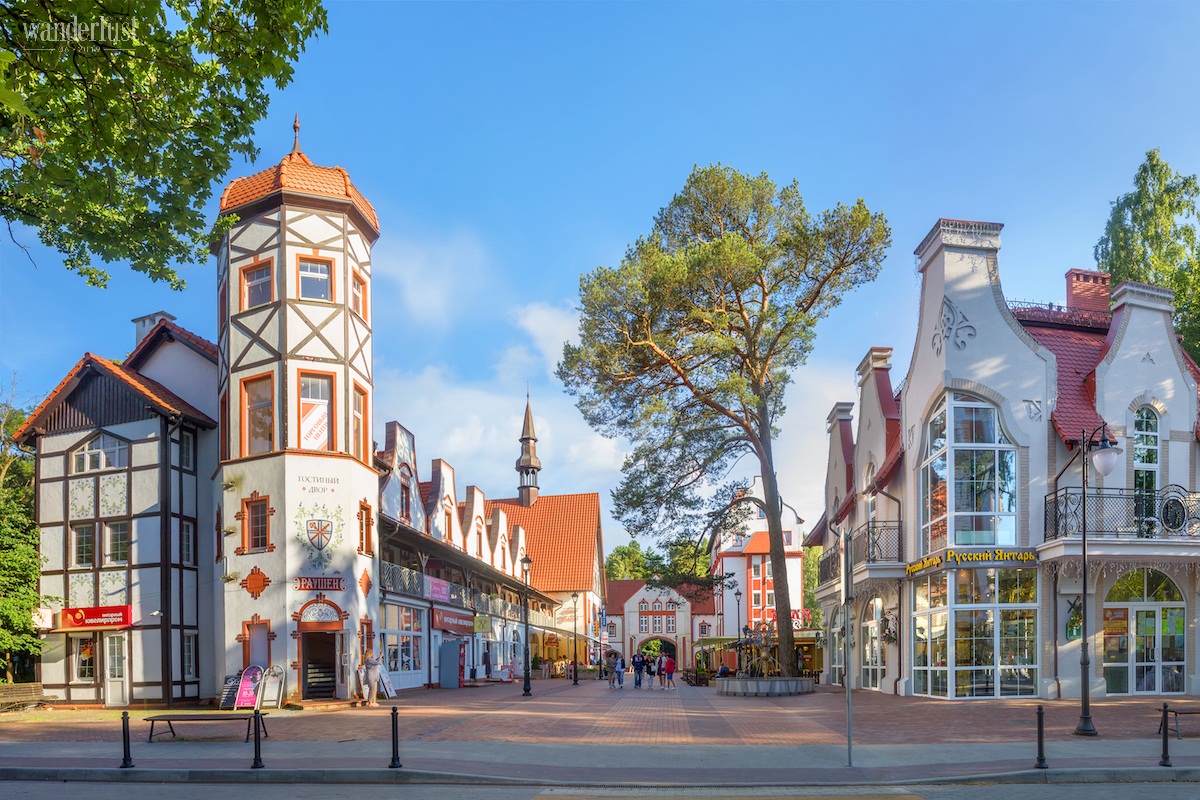 Every corner of Svetlogorsk gave me numerous surprises, the green colour of the birch forests, an occasional row of red maple leaves, a feeling of wistfulness before the apple trees bloom spotless white, or immersing myself in the beauty of the cherry flowers fluttering in the wind. Legend has it that many decades ago, the people of Rauschen (now Svetlogorsk) wanted to protect their city from the moisture of the wind and the sea, so each new settler had to bring a tree with them to their new home. It is estimated that more than 1,200 plant species have been planted in and around Svetlogorsk, covering up to 1/5 of the area. That is the reason why every step in Svetlogorsk feels like you are lost in the forest full of different flavours.

Believe me, everything I say only reveals a small part of the reality, as there are so many things that cannot be expressed in mere words. Only when you actually arrive in Svetlogorsk will you feel the full sense of this when all your senses are awakened. The tranquillity and captivating classic beauty here will make you immediately want to leave the hustle and bustle of life behind, unwind and enjoy life’s sweet moments.

THE HOMELAND OF SUNSTONE

Amber – fossil pine rosin from tens of millions of years ago – is the most famous gemstone in Russia. Many people already know of the “Amber Room” which is considered the “eighth wonder of the world” with its walls inlaid with precious amber. This gift was given by the Prussian King Friedrich Wilhelm I to Tsar Pyotr I in 1716. The original room was installed in St. Petersburg but was looted by Nazi Germany in World War II and eventually disappeared. The fate of the Amber Room has remained a mystery to this day and the hunt to find it is one of the world’s largest searches for treasure.

Of course, it wasn’t until the “Amber Room” disappeared that people knew of this treasure and its value. From ancient times, amber was considered a precious item, described as the tears of the goddesses, and used to honour goddesses including Freiya – the goddess of beauty in Northern Europe, or Sekhmet – the war goddess of Egypt, and Persephone – the Greek goddess of spring. And the most widely used name is probably “Sunstone” because it is believed that amber bears the energy of heaven and earth, accumulating for millions of years, bringing warm feelings and positive energy to those who wear it.

And one thing not everyone knows is that Kaliningrad Oblast has a truly enormous amber mine which contains up to 90% of the world’s amber, supplying 300-400 tons of raw amber to the market annually. What a surprising number! In Kaliningrad, there is the only Amber Museum in the world covering an area of over 1,000sq. m and storing more than 16,000 artefacts. Arriving in Kaliningrad, I was immediately mesmerized by the endless number of sparkling amber stones. From the airport, commercial centres, hotels, museums, shops, to factories where there is a myriad of designs including jewellery, mosaic pictures, souvenirs, bowls, cups, and watches made from amber of different qualities and prices, so it is not difficult to choose one or more incredible designs and feel safe as the amber is 100% guaranteed.

In recent years, scientists have begun studying insects that are inside the amber to discover the past. More than 1,000 species of extinct insects have been identified in amber so far and is the reason behind why people sometimes call amber “the window of the past”. David Federman, the author of the book A Consumer Guide to Colored Gemstones shared: “Amber is like a capsule containing the time made by nature and saved on Earth.” Holding a piece of amber in your palm and illuminating it with light, the fossils accumulated over millions of years will make you feel like you are holding the flow of time, transferring warm energy into your body through the touch of your hand. 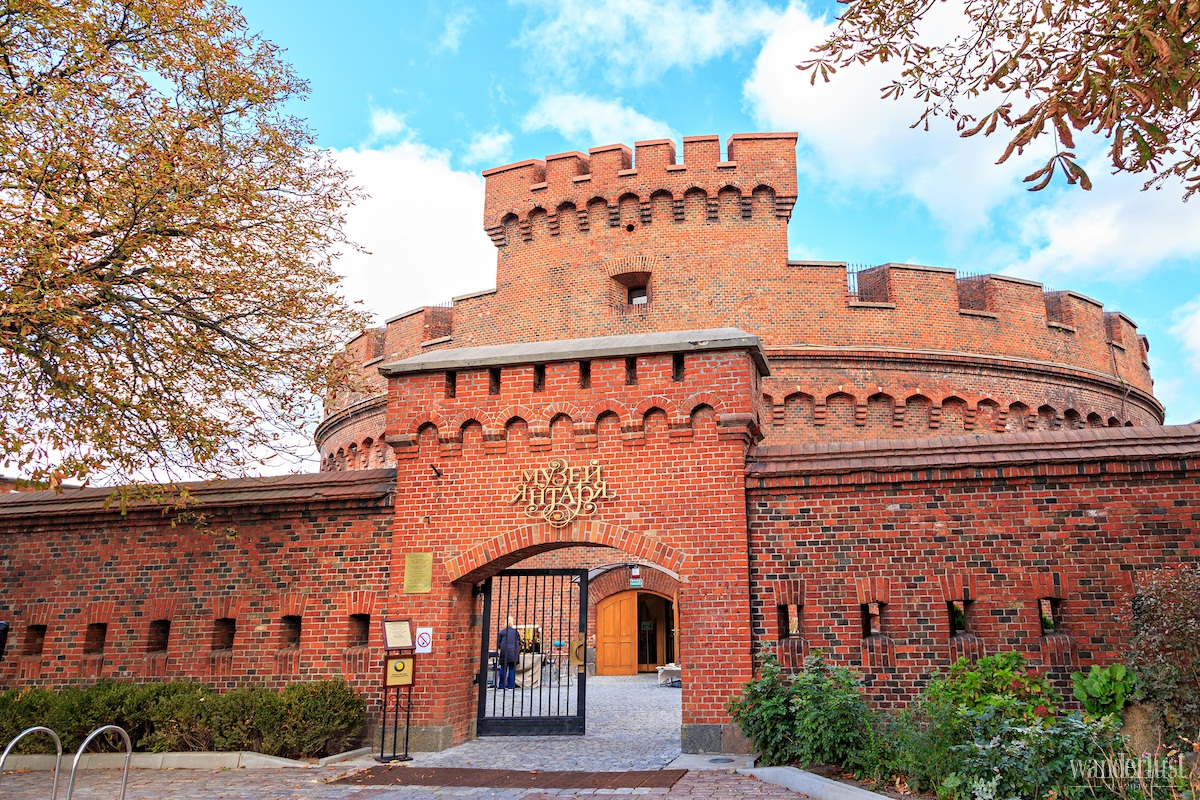 From Vietnam, you can take a flight from Hanoi or Ho Chi Minh City to Moscow, and then continue on a domestic flight to Kaliningrad. Aeroflot, Russia’s national airline is the ideal choice as it offers convenient flights at reasonable prices.

The seasons in Kaliningrad each bear their own distinctive beauty. Spring is from March to May with grass and blooming flowers, while summer runs from June to August with the highest temperatures from 20OC to 25oC. Autumn lasts from September to November with rows of romantic yellow trees, and winter begins in about December and ends in February with temperatures ranging from about -11oC to 5oC.

The Russian ruble is denoted by RUB with a rate of RUB1 = VND361. You can exchange money in Vietnam or take dollars to exchange at local banks.

Amber is the most popular item. Large stores or shops in areas around museums, commercial centres, luxury hotels, and airports are subject to strict controls and are committed to selling genuine goods.