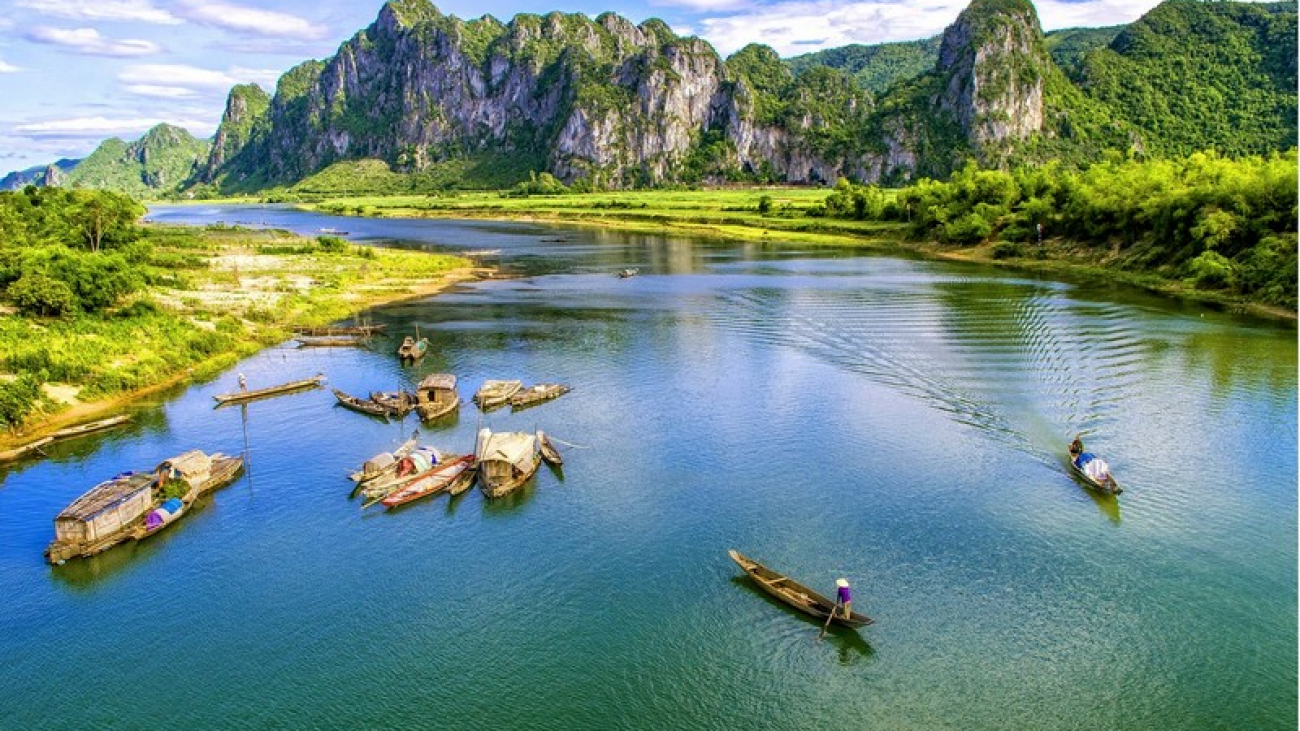 After many trips, I have fallen head over heels with the coastal roads, the melodious tunes carried on the gentle breeze and the sound of the waves crashing against the shore. Most notably, I still feel nostalgic for Quang Binh as this beautiful undiscovered land beholds such a marvellously unique identity. 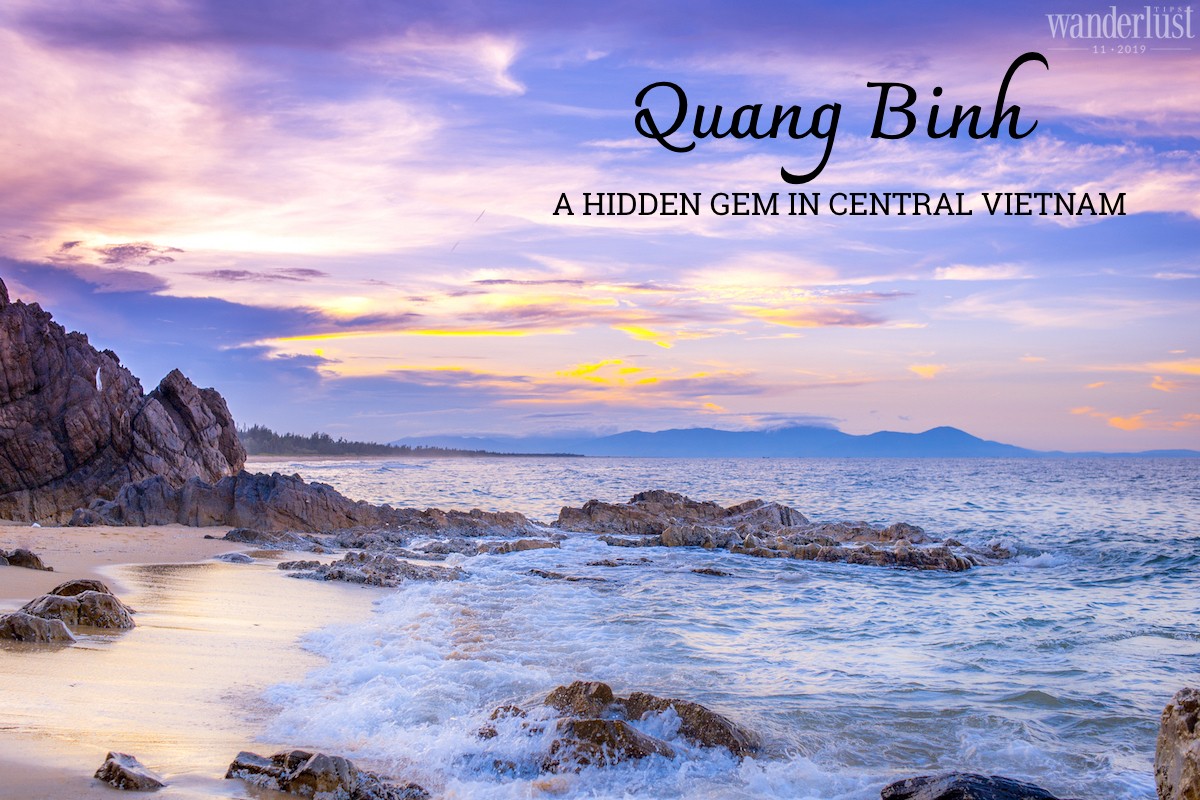 My friends and I arrived in Quang Binh at nightfall when the sun had not yet risen for the day and there were still thousands of little stars still sparkling in the sky. The central land captivated us with its modest beauty. My friend told me, “There is nothing new to discover in Quang Binh”. That is true. Quang Binh still bears its unique identity, an old yet thrilling beauty. Until now, retreating to this beautiful land was probably the most peaceful trip for me.

At Nhat Le Beach I wanted desperately to run barefoot across the smooth sand at the break of dawn. On that day, we sat and enjoyed the gentle sea breeze together. The clouds stretching out to the horizon in the distance. The dazzling rays of morning sunlight gradually shone through the clouds casting glorious sunlight onto the sand. Although the sun only shone briefly, its stunningly brilliant beauty was unforgettable. 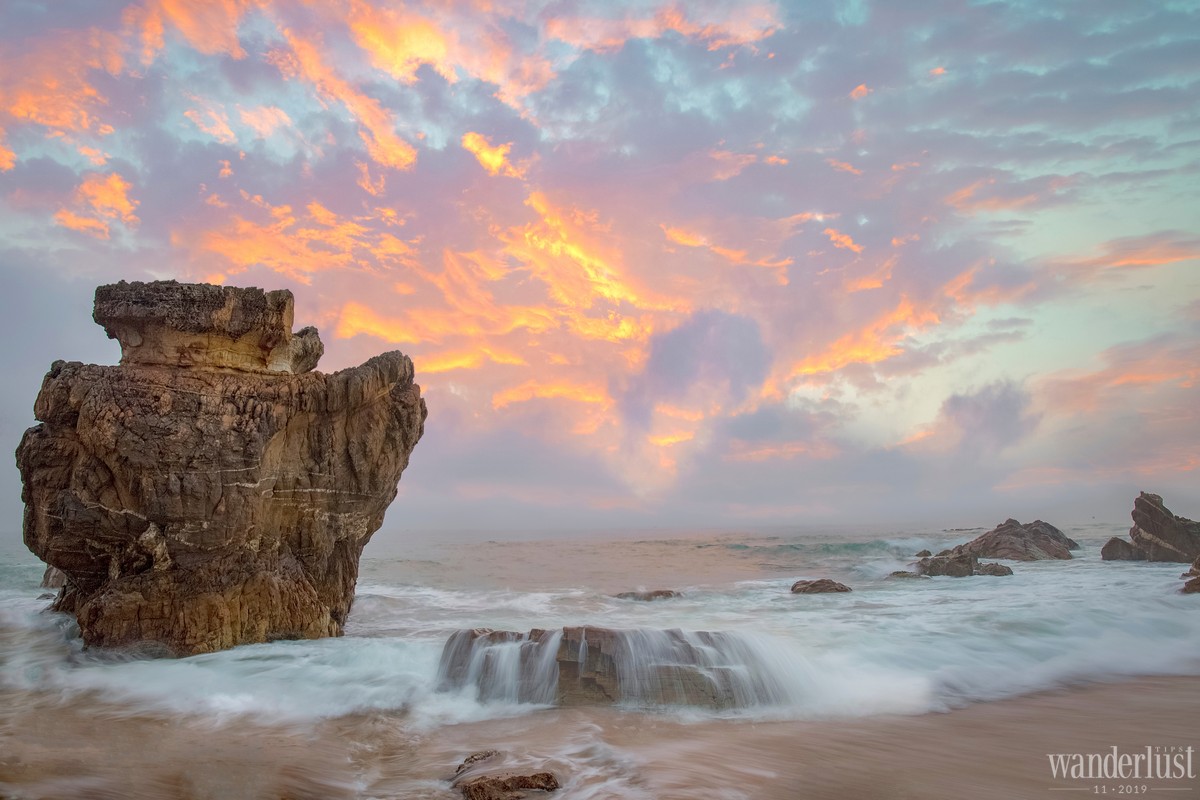 After watching the picture-perfect sunrise, we moved to the Jumping Rock Beach, located about 25km from the city centre. This beach was even more beautiful than the last, with crystal-clear waters, fluffy white sand and the rocky mountain formations standing tall alongside the ocean in the sunshine. The wind and sunshine have eroded the rocks day by day, forming a marvellous sculpture at the hand of Mother Nature. The rocks are scattered along the shore, dancing with the waves through the four seasons of spring, summer, autumn and winter. If you take a closer look, you will feel that the inanimate rocks suddenly come alive. They bear a peculiar resemblance to buffaloes grazing leisurely or toads jumping on the waves.

The beach in Quang Binh is still untouched with white sand and clear azure sea. The dazzling sunshine shone through the water surface, creating a stunningly serene seascape. Sitting down on a ledge and letting my emotions drift away, I heard the gentle waves crashing against the cliffs. Additionally, Jumping Rock Beach left a strong impression on me. 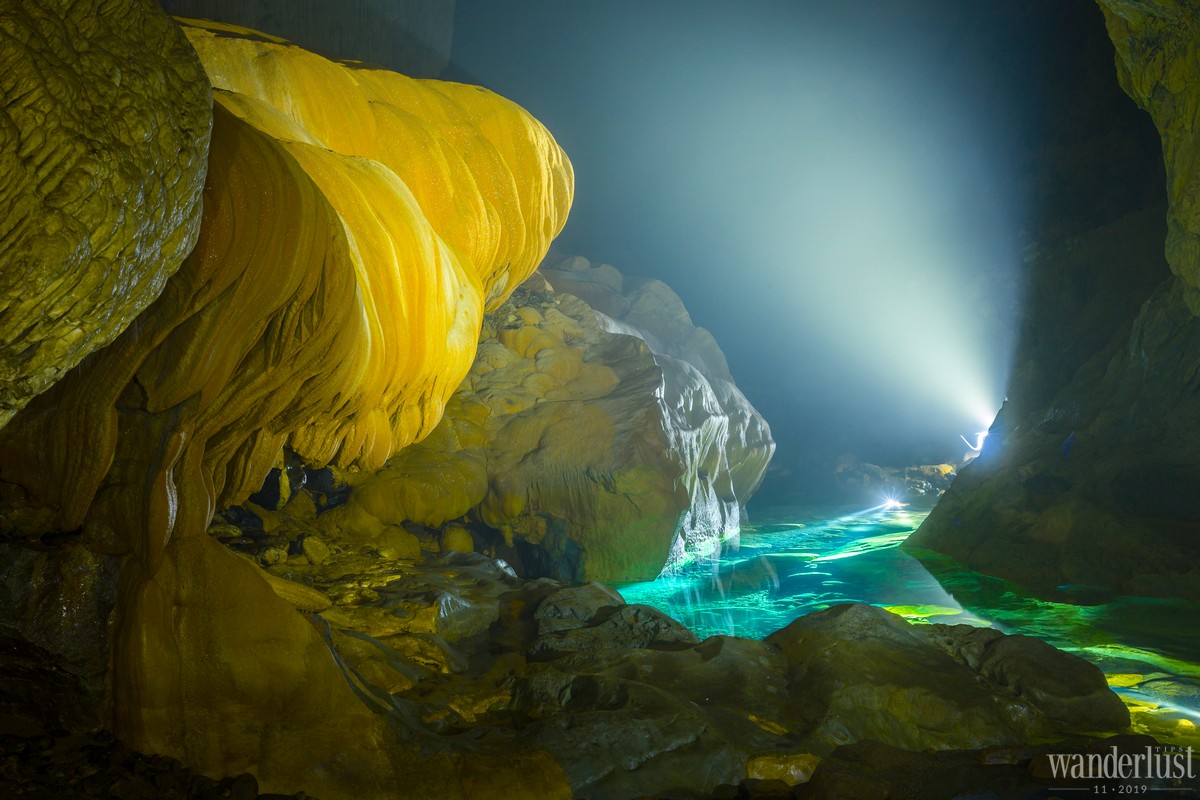 Waving goodbye to the sea, we visited Quang Phu Sand Dunes. Around a 20-kilometre walk from the Jumping Rock Beach, a picturesque sub-desert landscape appeared before our eyes. The white sand dunes stretched across the coastline under the sparkling sunshine, sometimes dotted with wild greenery and trees. The sea breeze blows all day and night, so the sand formations change their shape every day and the colour of the sand also changes hourly. I could not hide my surprise as I had the opportunity to witness this miracle first-hand. When the sun climbed higher in the sky, the sand glistened a pure white but had turned bright yellow by noon. By dusk, the vast sand dunes were blanketed in a soft grey.

Don’t miss the super-fun sandboarding activity when taking a visit to Quang Phu. Sitting on a board and sliding from the top down to the bottom through the layers of smooth white sand is an excellent way to spend your day. Feel like you are flying whilst listening to the sound of the gentle breeze. Firstly, I felt a little scared and screamed loudly but the second time I quickly adapted and wanted to conquer the higher sand dunes.

We returned to the hotel as dusk fell and the sun was hidden behind the sand dunes. Standing in the opposite direction to the light and taking a look into the distance, I spotted some little shadows frolicking on the high sand dunes. The vastness of the sky and the sand dunes made me feel very small.

TESTING THE BOUNDARIES OF COURAGE 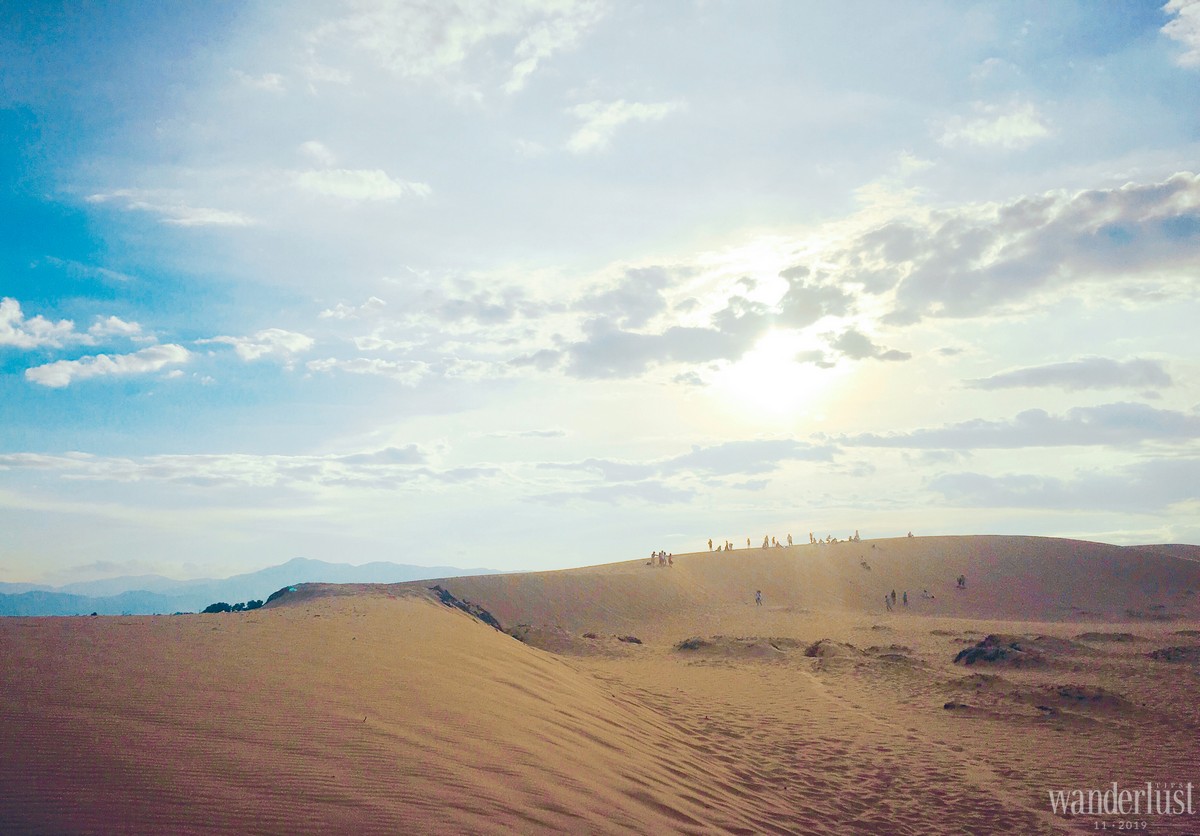 My Quang Binh trip continued in Phong Nha Ke Bang National Park – one of the most infamous destinations of the North Central region. From Dong Hoi City, we travelled to Ho Chi Minh Road about 40km to the Northwest, we arrived at the Son River Wharf for an adventure around the natural masterpiece hidden amid the lush green mountains and forests.

The Son River boasts a peaceful and serene beauty. The undulating mountain ranges are silhouetted against the crystal-clear water. It is said that the emerald river water is likened to the rich green of the grasslands, but it is called the Son River because, in the rainy season, the rain has eroded the rocks from the mountainsides and crashes down forming an ocher colour. 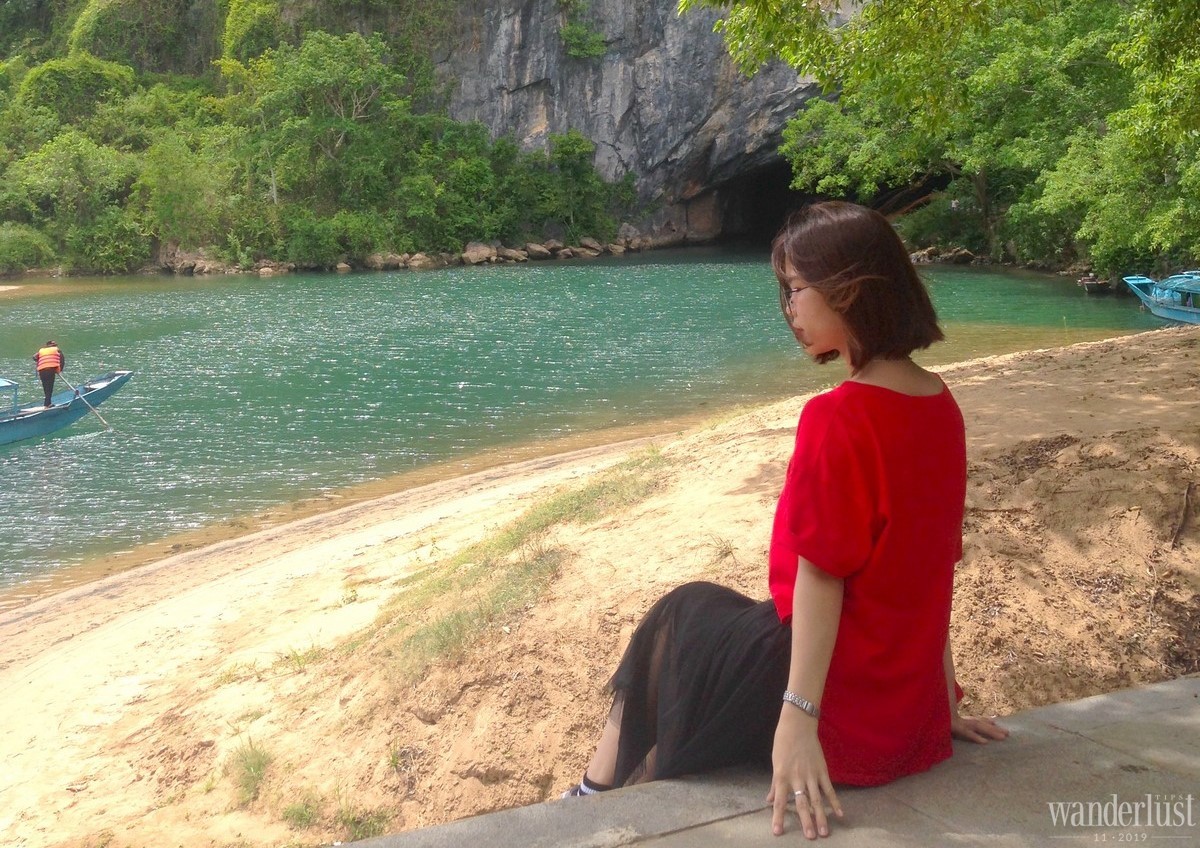 The azure-painted boat took me on a thrilling journey. I could not take my eyes off the breathtaking natural surroundings. Thanks to the charmingly mysterious beauty of the arid and harsh land, travellers seemingly leave their heart in Quang Binh. The Son River is the main route to take visitors to the Phong Nha Cave. The magnificent caves are nestled in the limestone mountains and sheltered by an array of tropical forests.

It seems that Mother Nature has carved out the untouched structures in an amazing variety of shapes. Phong Nha was recognised by UNESCO as the most magnificent and magical cave in the world. I was blown away by the sight appearing before my eyes as the boat started to enter the cave. The cave gate is about 20m wide and about 10m high the impressive stalactites. The further the boat went, the cooler the air got. The light faded and then disappeared, leaving only the rhythmic sound of the paddles and the tourists’ voices on the boat. Sometimes, droplets of water from the stalactites fall, making everyone both surprised and excited. 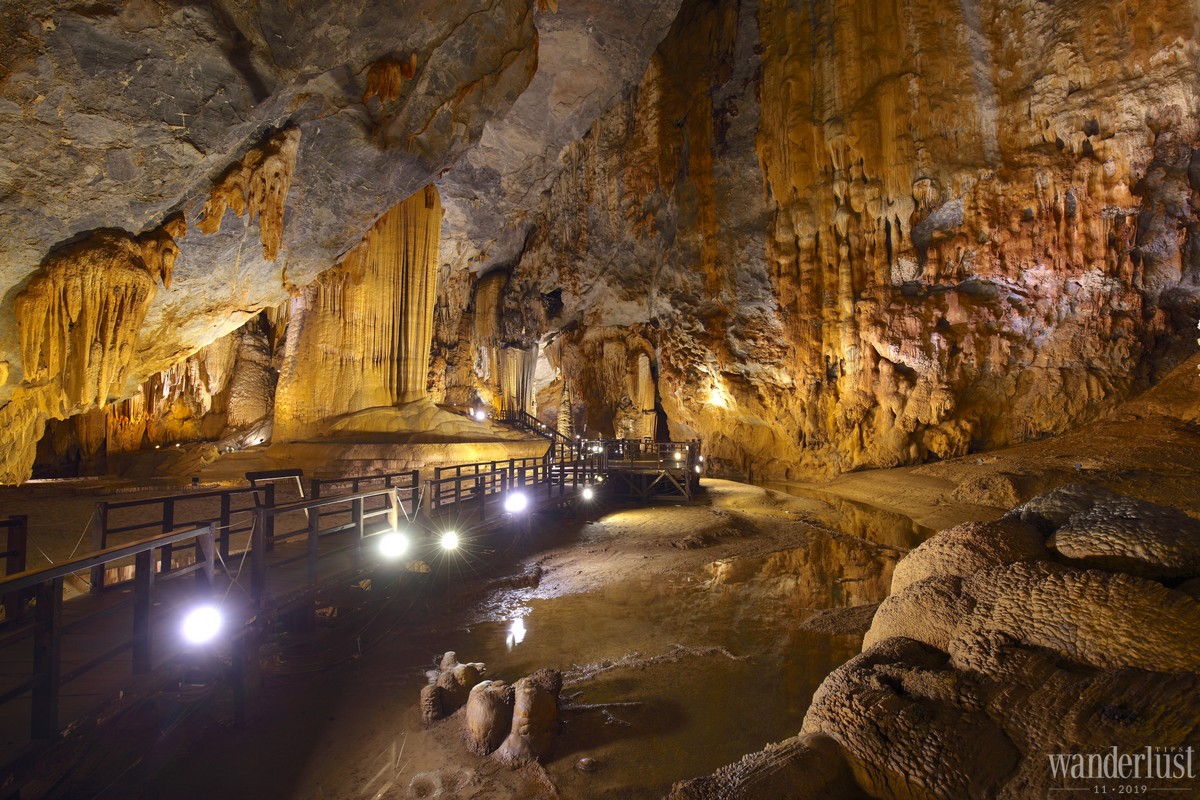 The stalactites hanging from the roof of the cave and the stones protruding from the bottom are as dense as a lush green forest. The large stalactite blocks in countless unique shapes have inspired the human imagination, for instance, people argue that there are lion-shaped blocks or giant colourful chandeliers. This exhilarating cave adventure inspired a different outlook on this multifaceted and colourful world. If you want to test your courage, Quang Binh offers plenty of opportunities. I vividly remember the moment when I took the leap and went on the zipline. My heart seemed to skip a beat with fear and my legs flailed in the empty space. Only when I came out over the Chay River, did I fully relax. I not only admired the panoramic view of the Chay River from above but also took a dip in the cool stream.

I thought that I would never have the opportunity to admire a stunning emerald river like the Chay River. The watercolour at each river section is strikingly different with a myriad of turquoise and green. The riverbanks are home to many limestone beaches. The water flowing tirelessly through the limestone ranges year on year has created plenty of peculiar shapes. The ancient trees are reflected in the stunning river. Amidst such an impressive surrounding environment, we broke the silent atmosphere by howling with laughter whilst kayaking on the Chay River.

A WAVE OF NOSTALGIA 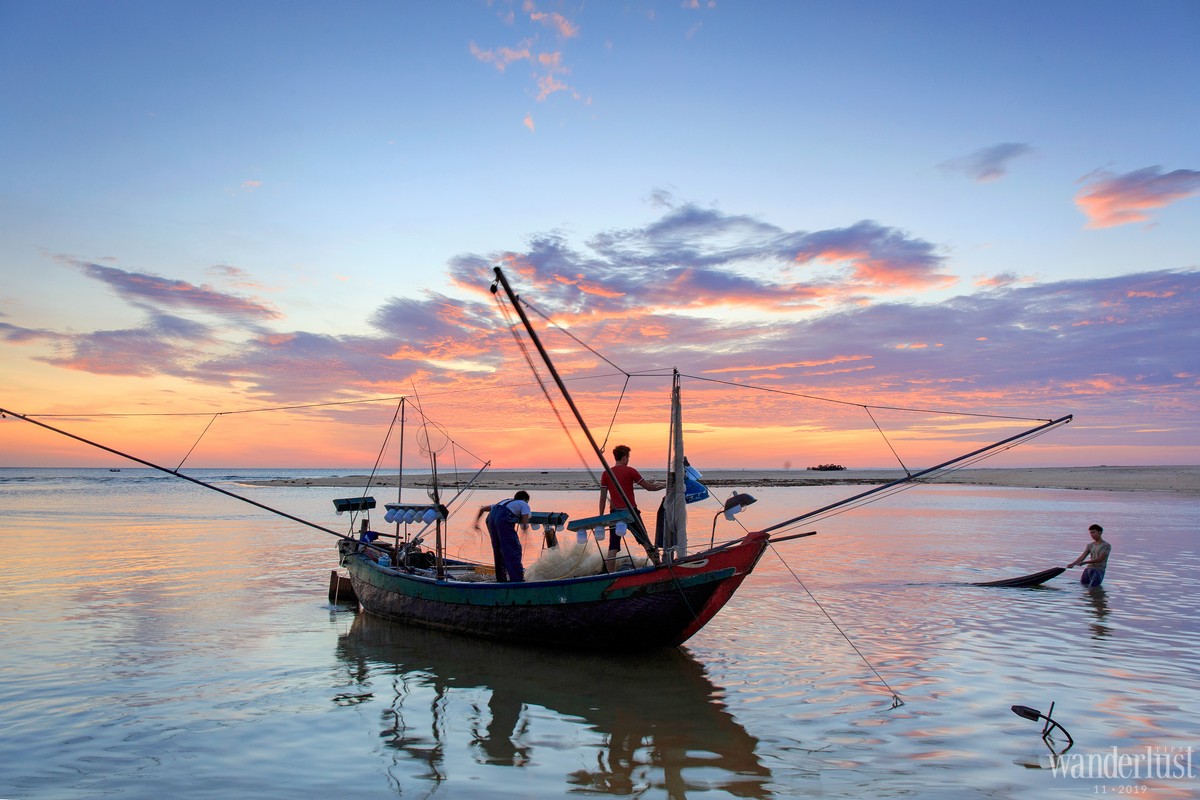 Quang Binh has the simplicity of the salty sea, the scorching sun and the friendly people. I still remember when dusk fell on the sandy beaches, the river seemed to be more striking than the sky as we sat together and shrieked with laughter. I was filled with longing for my fulfilled and unforgettable days in Quang Binh.

Quang Binh is divided into two distinct seasons. The rainy season begins from September to March, mainly in September, October and November. Notably, there are many storms in September and October. The dry season starts from April to August with an average temperature between 24oC and 25oC. June, July and August have the highest temperatures. During this time, the weather in Quang Binh is influenced by the Southwest wind which brings a hot and dry feeling.

>> You can take a flight from HCMC or Hanoi to Dong Hoi City by Bamboo Airways, Vietnam Airlines or Jetstar Pacific Airlines.

>> Dong Hoi Railway Station is the main station of the Thong Nhat Railway, so travelling by train is also a great choice. The tickets are reasonable for VND300,000 to VND700,000.

>> Jumping Rock Beach is home to many unique rock formations.

>> Phong Nha Cave: The admission ticket costs VND150,000 per adult and is free for children under 1.3m. The Phong Nha Cave boat tours cost VND360,000 per boat with a life jacket and the boats can carry up to 12 people including children. In the high-water season, the water level of the Son river will rise, as a result, the cave entrance could be obscured and tourists may not be able to take the boat tours.

>> Chay River – Dark Cave: There are two tours for you to choose. Firstly, the Discovery Tour includes the zip line, taking a mud bath, exploring the Dark Cave, kayaking and an array of thrilling underwater games. The tour costs between VND250,000 and VND450,000. Secondly, the Universal Tour includes the zip line, kayaking and plenty of thrilling underwater games for VND170,000 to VND270,000. Notably, the fares may vary according to the tourist season.

>> If you have a lot of time, you can explore many other attractive places in the Phong Nha – Ke Bang National Park, including Paradise Cave, Mooc Spring, Tien Son Cave, En Cave, Va Cave and Nuoc Nut Cave. Alternatively, if your budget allows and you are in good health, you can take a visit to Son Doong Cave. Additionally, Quang Binh is home to a variety of famous landmarks such as Vung Pagoda – Yen Island, Quang Binh Gate and Than Dinh Mountain.