[Wanderlust Tips April 2019] Hong Anh is a modern woman with an open personality and a great passion for travelling and exploring the world. In this conversation with wanderlust tips, Hong Anh talks enthusiastically about her devotion to cinema as well as her desire to present the beauty of Vietnamese nature through quality and meaningful movies. 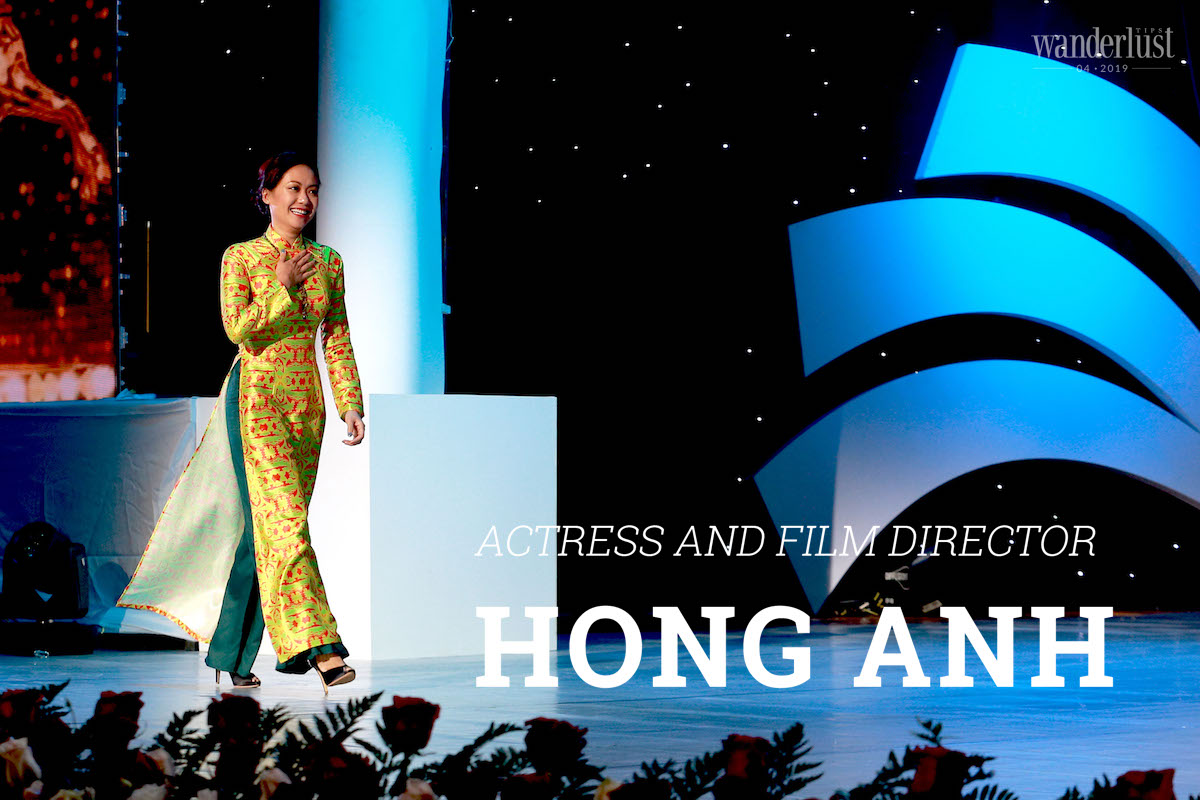 Cinema and travel are my two greatest passions in life.

Welcome Hong Anh, you have been involved in the film industry for over 24 years. How did you develop your passion for cinema?

Acting has been my passion since I was a child. I always loved all kinds of art activities during kindergarten, and I liked to play different characters. I also loved to read picture books and imagined myself becoming the animals in the books, playing multiple roles at the same time.

Growing up, I believed I would do better in art and social sciences and in making my first career choice, I decided to go to dance school. From there I made the transition to cinema, and from my first movie, I realised I truly wanted to pursue this as a career because working in the cinema is an incredibly fulfilling career that suits my personality, matching with my acting ability and interest in travel.

Does that mean that every filming trip is also an opportunity to travel?

I love to travel and to explore, so I also love my job as it gives me the chance to go on long journeys, which bring me to faraway lands little known to most tourists.

For example, in the movie “Thung lũng hoang vắng” (Deserted Valley), I played the role of a teacher at a village commune Ta Giang Phinh, 30km away from Sapa town. The school was situated on a hill with the view of a dreamy valley, cloudy mountains and grandiose rice paddy fields. You can experience all four seasons (Spring – Summer – Autumn – Winter) in just one day. I followed ethnic people to the forest to see how they harvested cardamom, the local life there is simple yet so beautiful. These villages are much different from the places specialising in tours on a large scale near Sapa town. 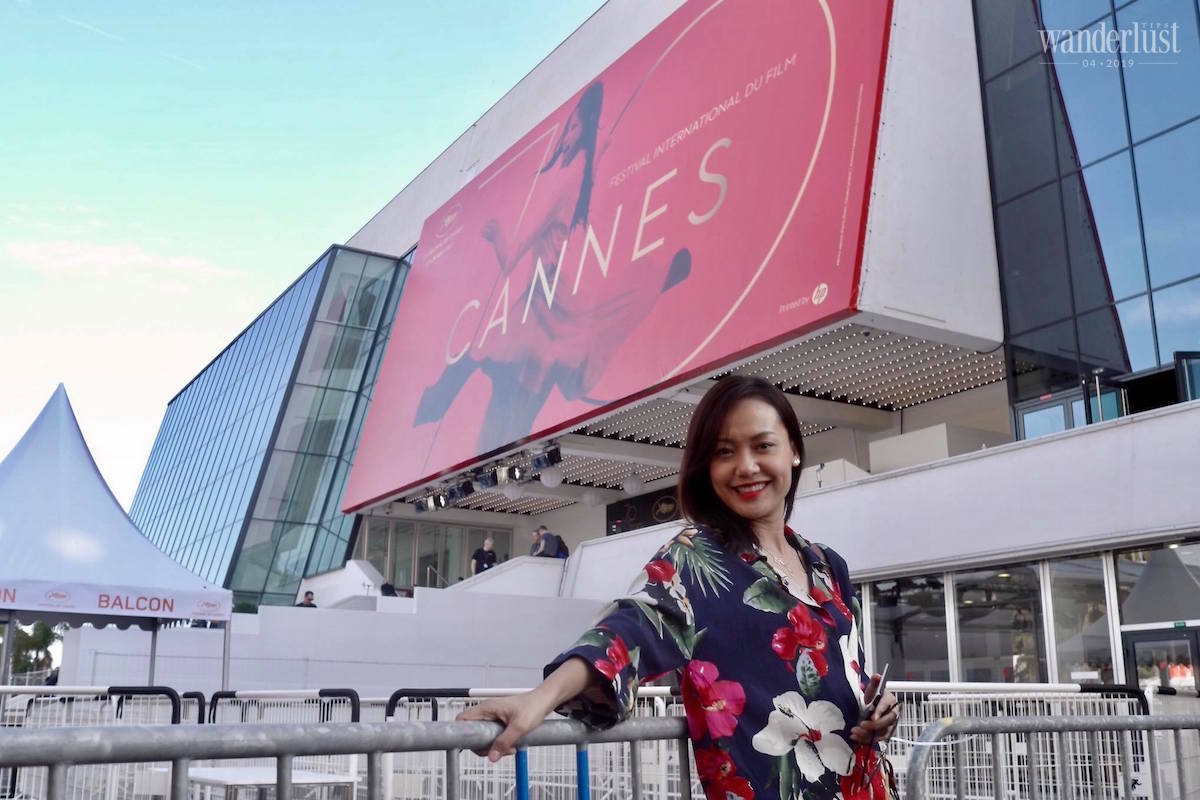 You have a passion for travel and also have the chance to follow that passion. Which places have you already visited?

I’ve already explored all along the S-shaped coastline of Vietnam and visited many other places outside of Vietnam around Asia, America, Europe and Australia. Travelling allows me to explore different cultures and natural landscapes, things which I had only read about in the books. Truly being there and seeing living things in person are such amazing experiences that can hardly be described in words. If you follow me on Facebook, you will see how I usually record my travel experiences, even creating live videos of my journeys. I do it just out of interest, I want to keep a travel journal and maybe what I’m sharing can be meaningful to the travelling community.

Successful movies will have a positive impact on tourism by boosting development of the locations in the movie’s setting.

Among the places you have been to, which one do you feel the strongest emotional connection with?

I love the sea in Vietnam. I have been to some of the most famous beaches around the world, the Maldives for example. Staying just for one week is great, but if I stay longer I don’t feel like I belong there, the scenery is beautiful, but it doesn’t give me the feeling of closeness to them. This is totally different from the untouched, pristine places in Vietnam such as Binh Ba and Binh Lap of Khanh Hoa, Phu Yen and Binh Dinh. All along the thousands of kilometres of coastline in central Vietnam are stunningly beautiful beaches with crystal clear blue water. 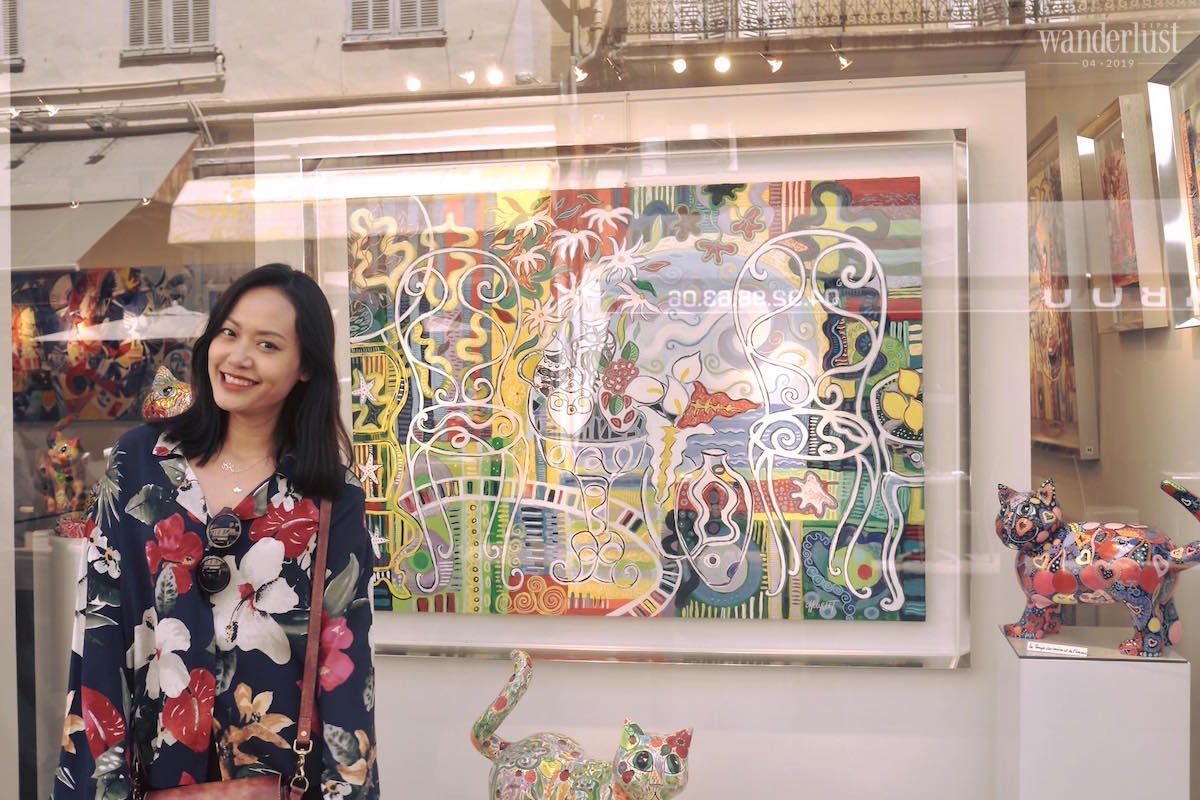 Apparently, the film industry and tourism have a very close relationship. In particular, many famous movies have laid the foundation for local tourism to promote locations that audiences have seen on the screen. What is your opinion about this?

It doesn’t matter how beautiful the movie scenes are, if the movie cannot touch the audience deeply, the beautiful images from those scenes will be quickly forgotten. That’s why everything starts with a good movie. A good film will have a positive impact on tourist’s motivation and the development of the locations in it. Maybe just preserving a part of a film set, which is not difficult, can be used to attract tourism.

Take Korea as an example, they are doing this really well. The decor of the coffee shop where the main couple of Autumn In My Heart met and broke up with each other has been kept the same as it was in the movie. They even keep repeatedly playing the romantic scenes of the couple, and also displaying memorable movie items and so on. Or also the lonely tree in My Sassy Girl. The journey won’t mean that much if we just simply take a look at a beautiful tree, but it will be more interesting and appealing if we know that that tree is part of our favourite movie.

So how about in Vietnam?

Vietnam has also done it. The movie I Saw The Yellow Flowers On The Green Grass directed directed by Victor Vu has successfully promoted the beautiful land of Phu Yen to many audiences. Or after the success of of Kong: Skull Island directed by Jordan Vogt-Roberts, the indigenous village in it has been reconstructed to attract tourists to Ninh Binh.

In “Go Go Girls” (Hong Anh played the grown-up Hieu Phuong), the slope Nha Bo has become a new destination for young people to take photographs and to check-in. Beautiful landscapes combined with the story of a successful movie will inspire more people to visit. Especially when films are brought to the international stage, it is an excellent way to promote tourism. 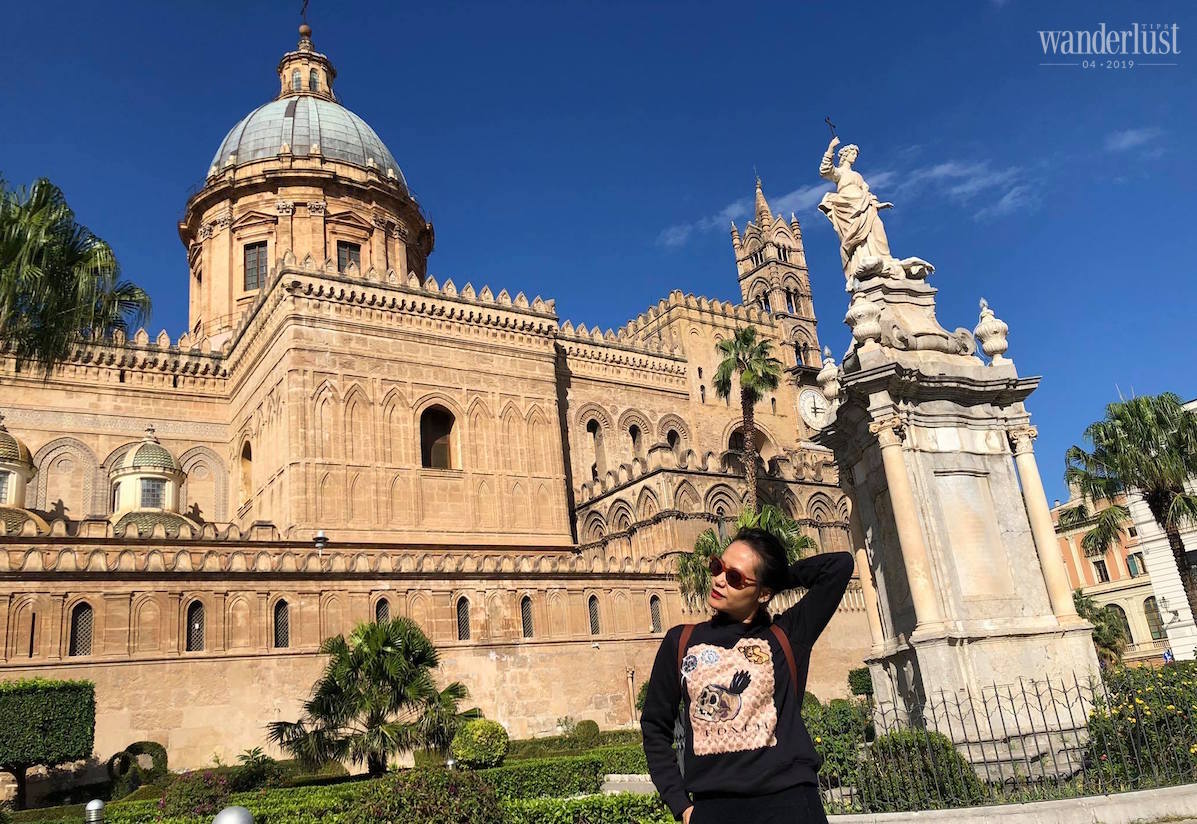 In the role of a director, how can you promote beautiful landscapes through movie scenes?

The Way Station was a significant milestone for me due to the change in my role from an actress to a director. This film was aimed at a niche market audience, and it didn’t financially succeed in the domestic market, but I am proud of myself for not giving up in the middle and completing it. Also, I am proud to be able to participate in the promotion of Vietnam to the world as the movie has won international prizes. The film was shot in Hoi An, and 98 per cent of the indoor scene footage was filmed in the Museum of Trading Ceramics, so through this movie, the images of the old town of Hoi An can reach a wider Vietnamese and international audience.

Very soon I have a plan to make a movie about people with mental health issues in today’s modern society. As always, the film will create a space for its audience to have their own thoughts and perceptions. The premise is a character that takes part in changing the fates of other characters in the movie. What I care about the most is always the feelings of the audience after watching the film and that it stirs their emotions, and to do this, the context of the story is critically important. I hope that my films through scenes of everyday life can represent real Vietnamese life as well as through sweeping outdoor scenery show the audience many visually beautiful places combined with meaningful messages. 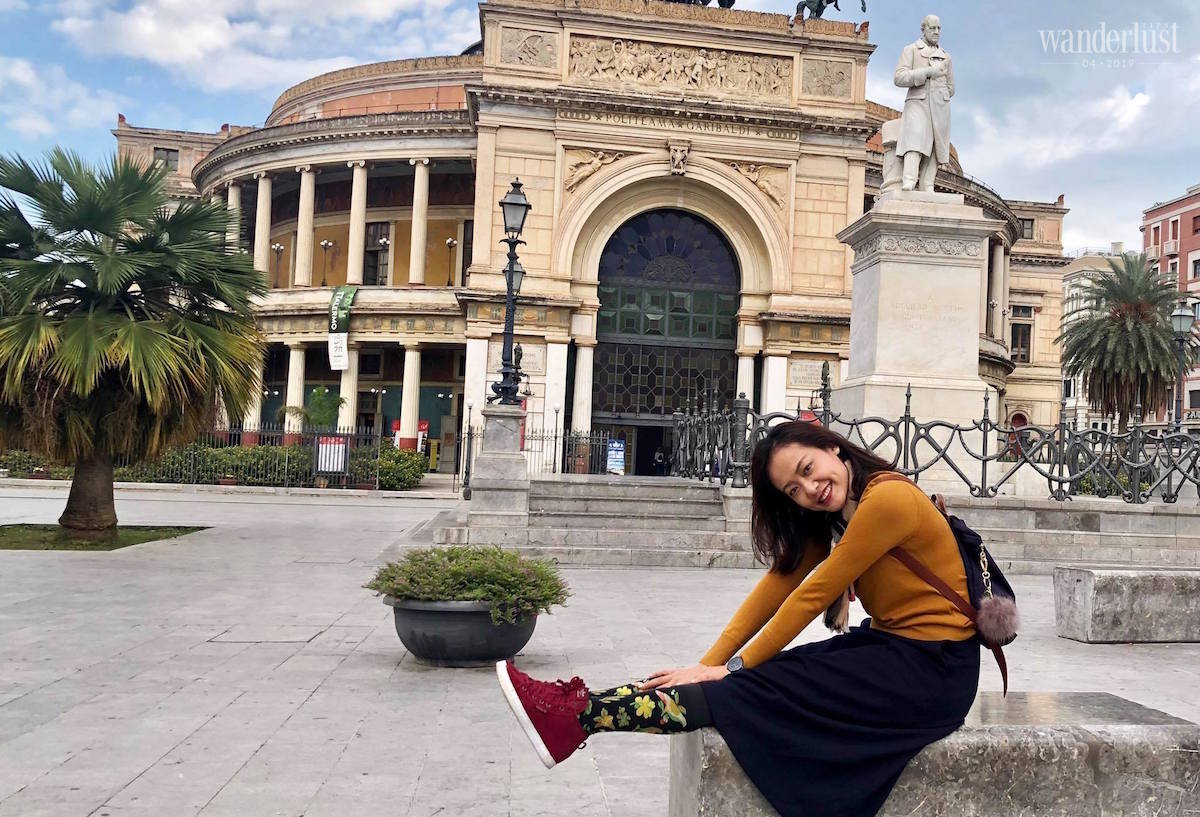 Thank you for sharing your insightful thoughts with us, and we wish you success with all your upcoming film projects!